Another day at the Punta… 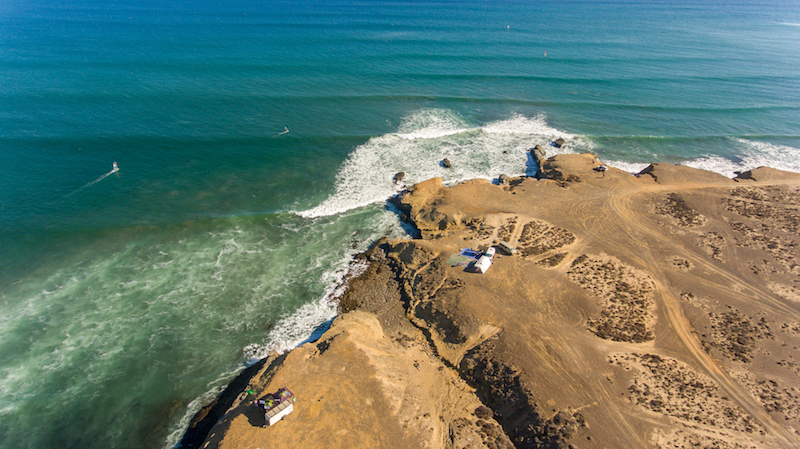 The wind started to fill in earlier today so our judging committee called for a start at 13.20 with 18 minute heats and two minute transitions rolling through the day.

Amateur 1
AWT rules allow sailors to enter in either Pro or Am divisions, and also an age group.
So the amateur contest opened with a classic AWT age range featuring Grandmaster Colby Deer sailing against Ishii Takara (a quarter of his age!) and thirtysomething Olivier Meline from France. All three riders found their waves but youth won over experience on this occasion. Taka learned from his first heat yesterday and managed to catch a wave high up at the peak and connect it all the way to the Chili Bowl. Fast learner.
Taka 1st, Olivier 2nd, Colby 3rd 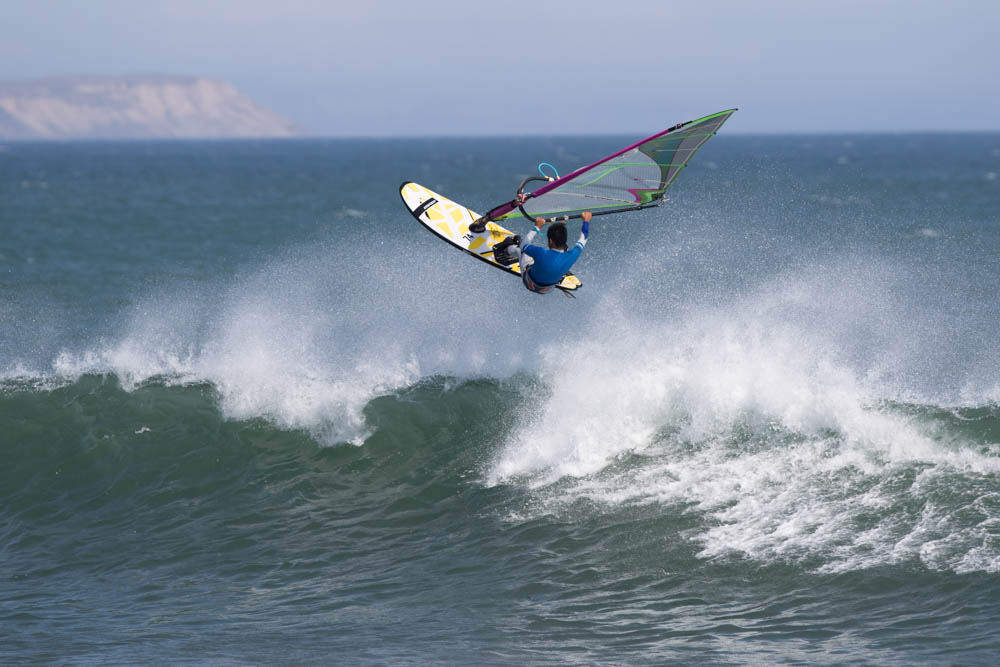 Amateur 2
Owen Barnhart opened the heat catching a wave as the flag went up. Jeff Allbright soon followed with solid turns all the way on two great set waves. Dwight Bode also got his share, catching a good size peak and taking it all the way. The final score was Jeff 1st, Dwight 2nd, Owen 3rd. 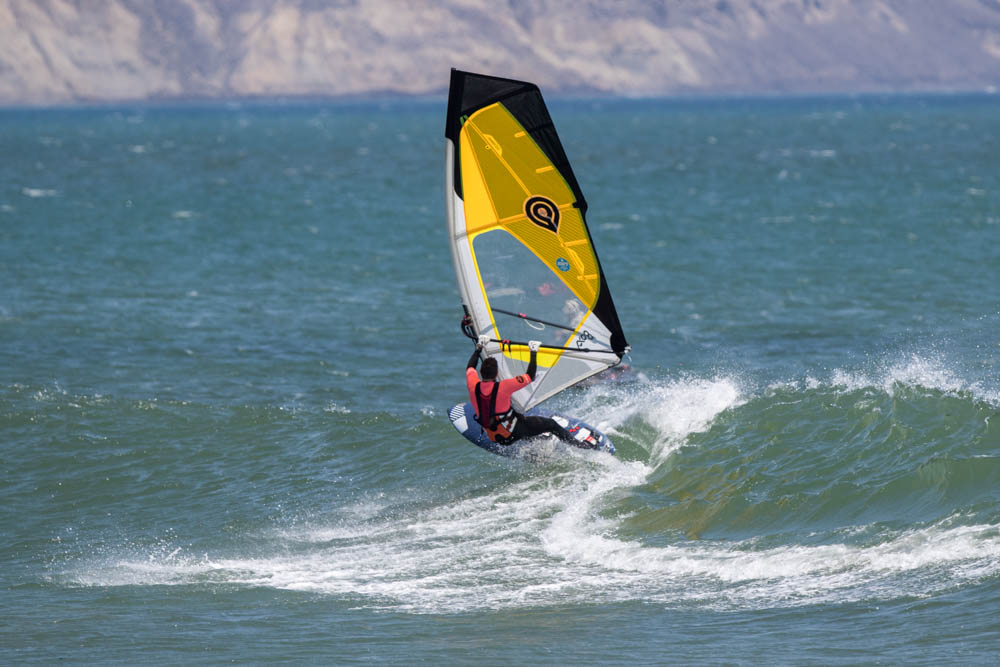 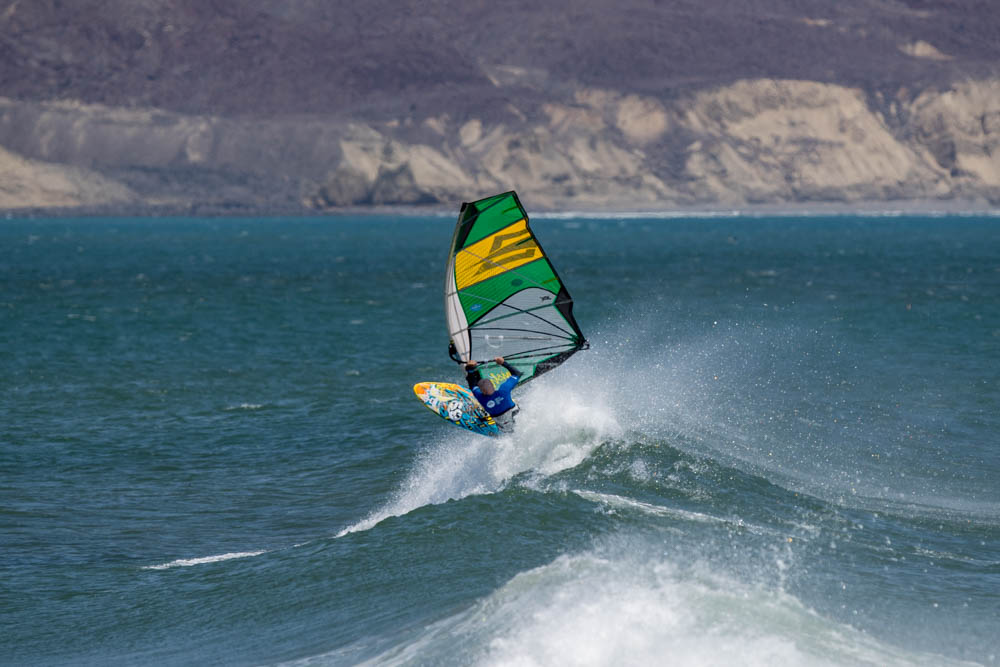 Amateur 3
A fully amped Alex McKirgan came flying off the beach to take his first wave the moment his watch beeped at him, cranking impressive turns and calling other riders off his wave. Then he realised that beep was the start of the 2 minute transition, not his heat! These things happen in a contest! When the heat actually started we saw great wave selection from Tem Gronquist who connected his turns from high at the Punta to deep in the Bowl and the stylish flowing rides of Carl Spiess but neither scored enough to beat Alex who remained composed after his slightly early start and went on to dominate the heat.
Alex 1st, Carl 2nd, Tem 3rd. 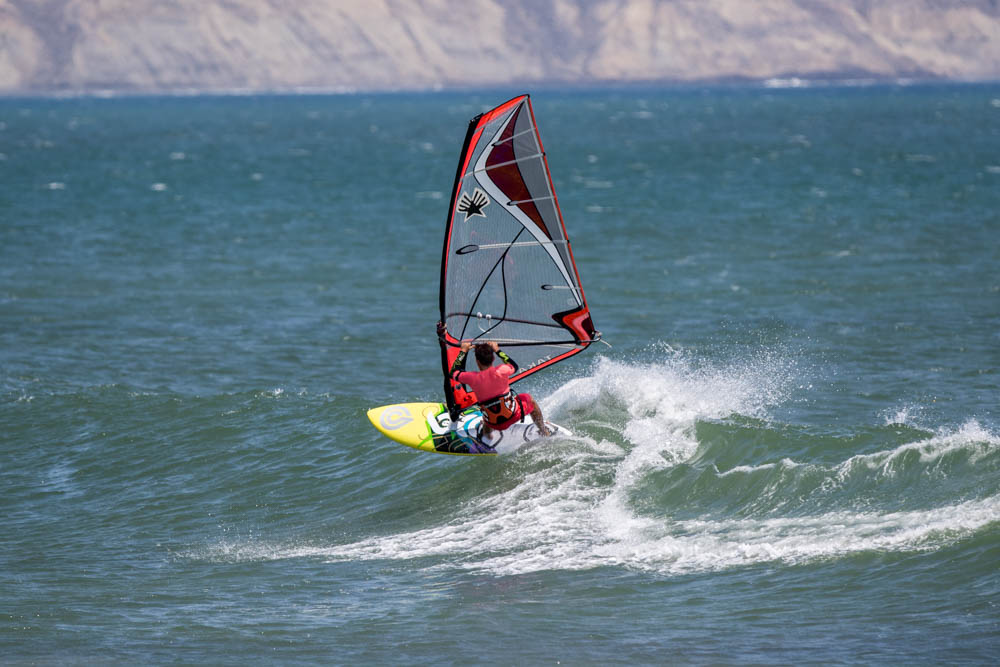 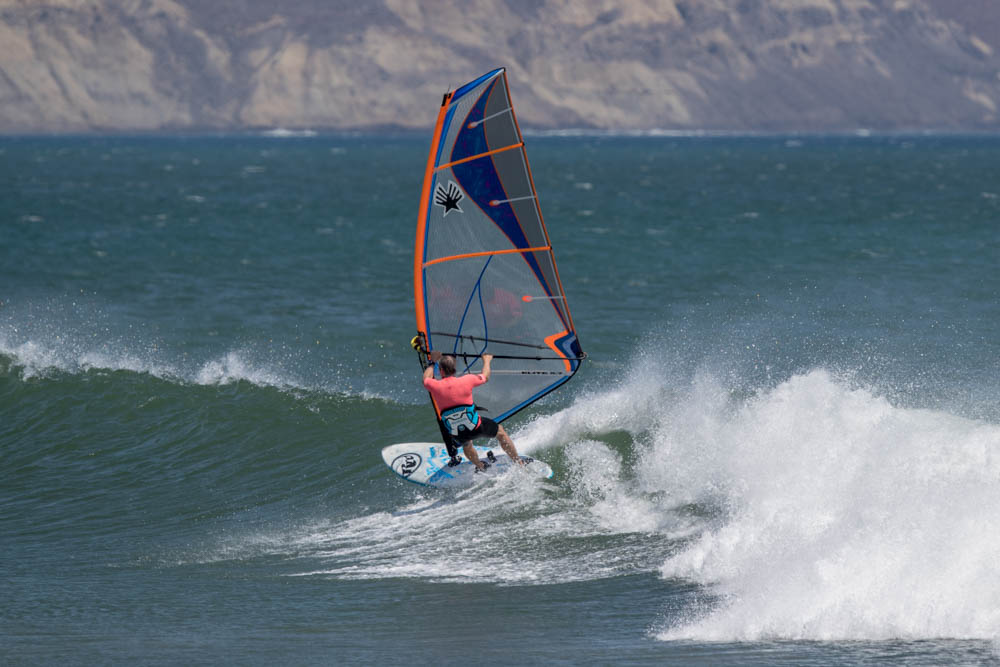 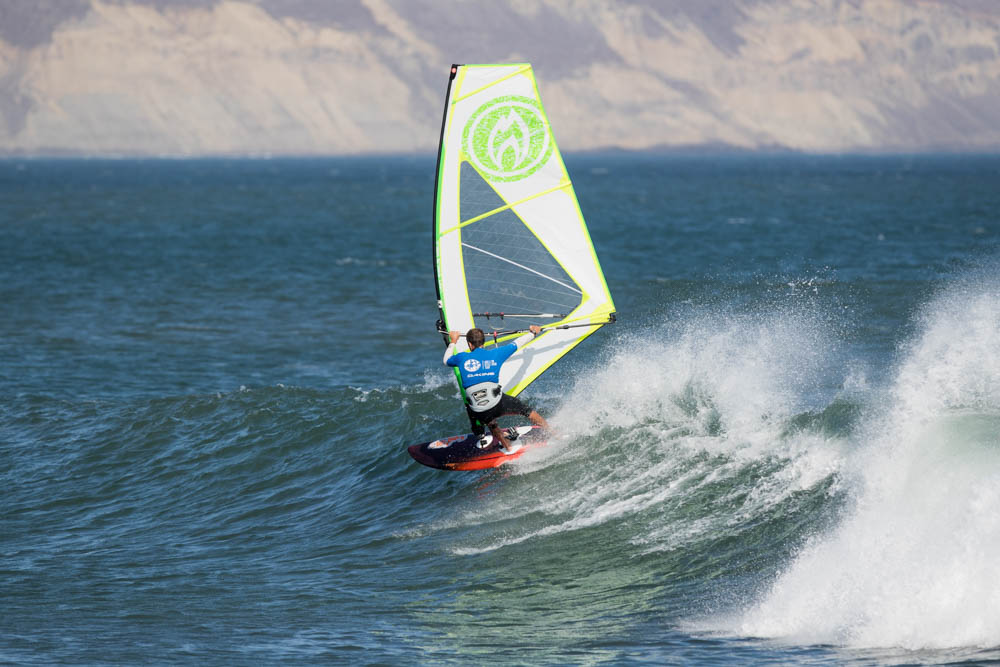 Amateur 4
Max Schettewi found a set wave to start the heat, with the other two waves going unridden as Eric Sinclair and Jonathan Pooley jostled for position. Eric and JP both found their waves, Eric getting long connected rides with the last one right on the buzzer, JP risking turns in the critical section while the crowd on the cliffs were shouting for aerials. Neither was enough to beat Max whose long consistent rides won the heat. JP 2nd, Eric 3rd. 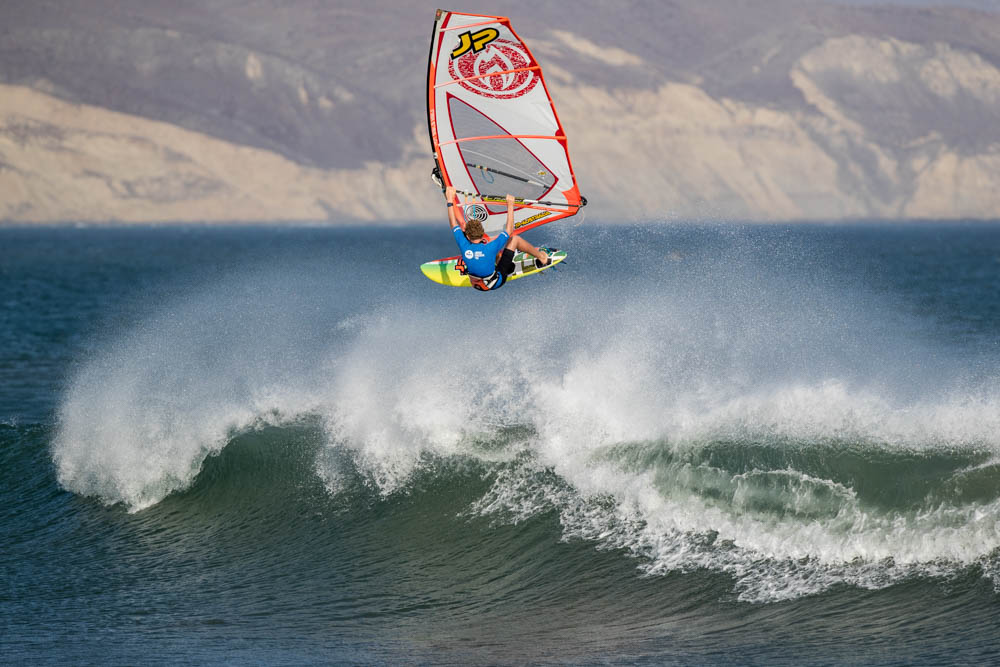 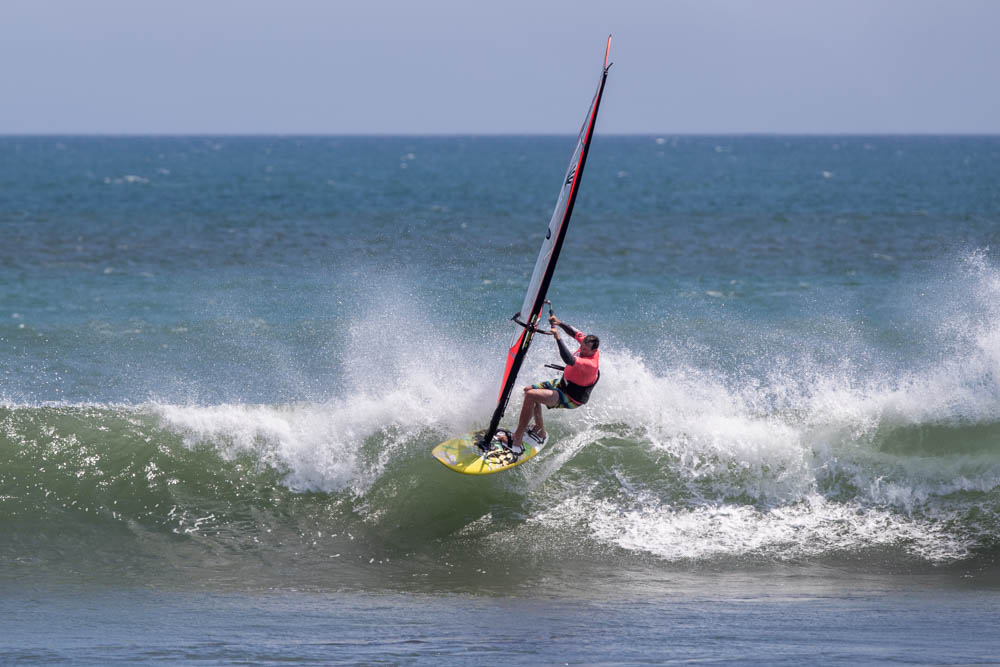 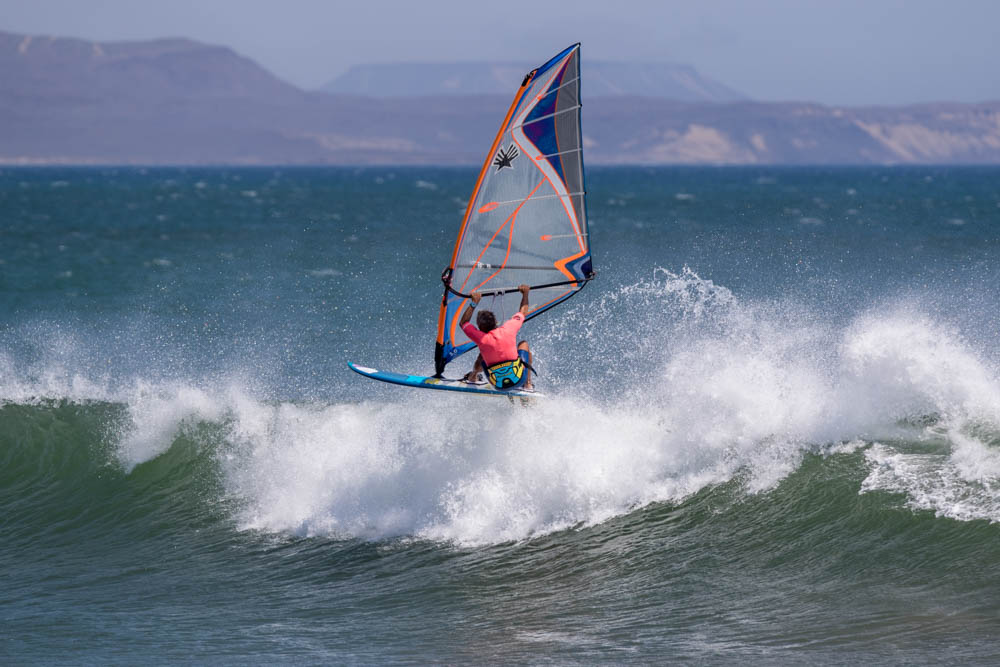 Amateur 5
The first redemption heat to give early round losers an opportunity to fight their way back in to the final. We saw Owen backdooring the peak and getting closed out in the white water, but he found a plenty more.
Dwight Bode found the waves he needed and headed down to the Chili Bowl. Meanwhile Olivier Meline was clearly getting back into his San Carlos groove with great wave selection and impressive turns. He took first place to advance to the last 8, with Owen 2nd and Dwight 3rd. 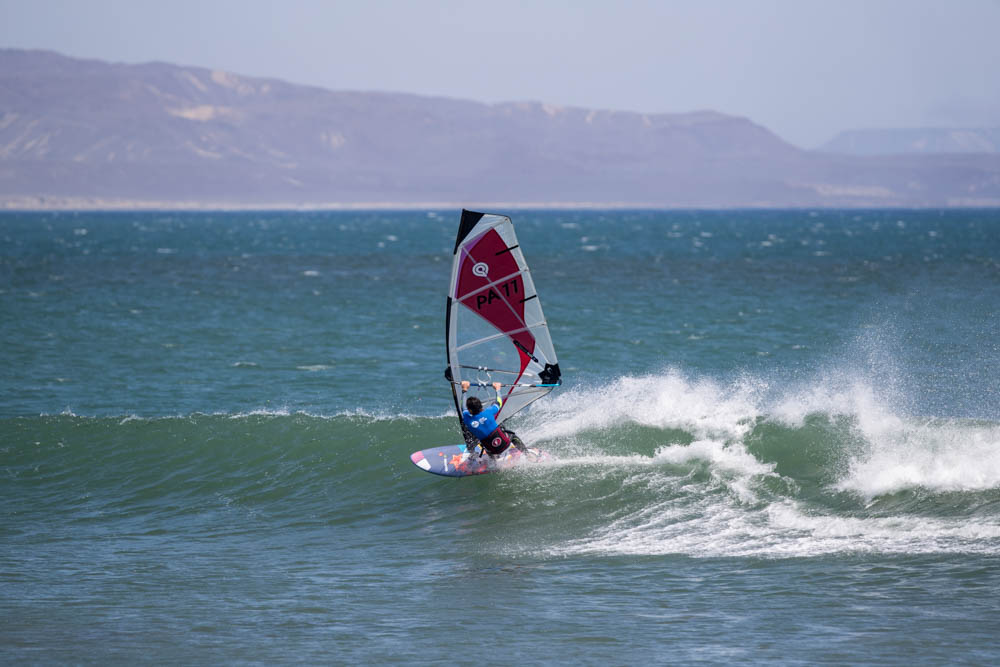 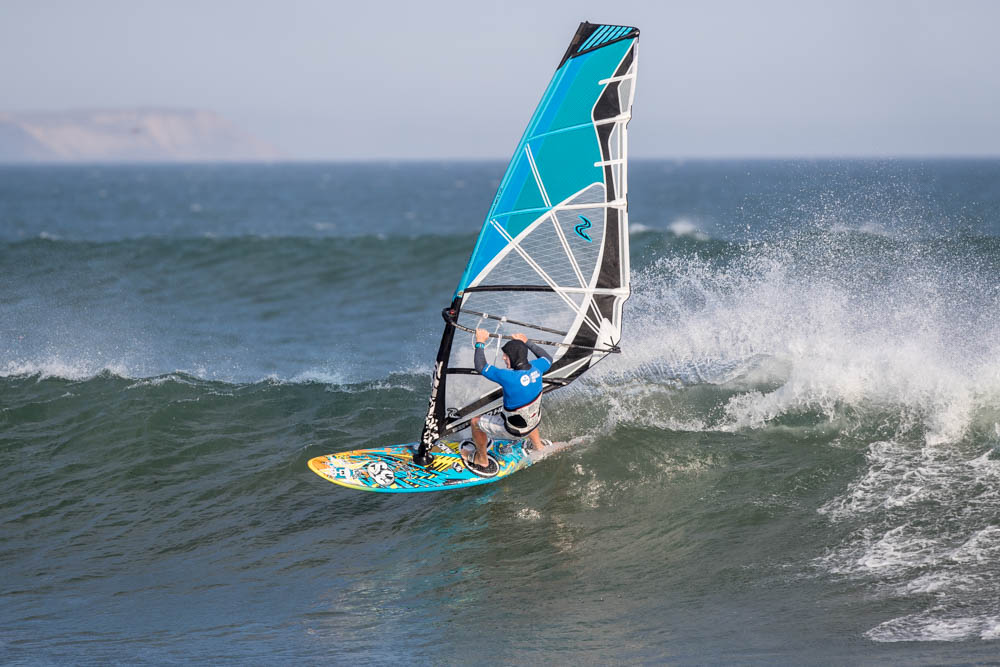 Amateur 6
The final Am redemption heat saw Carl catching wave after wave while Eric was carefully selecting his bombs at the peak. JP appeared to be on the edge of control, risking late hits but just holding on to take the 1st and a place in the final 8.
Eric 2nd, Carl 3rd. 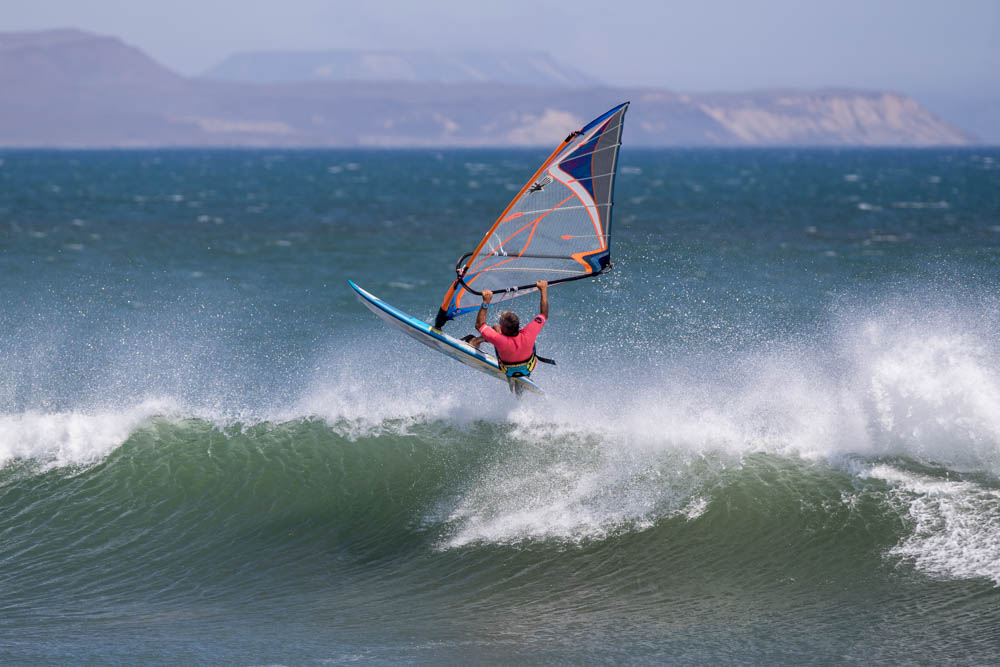 Grand Masters 2
Colby and Dwight go head to head again, conditions were dropping but both sailors managed to find their 2 required rides, despite the lack of waves. Then Dwight scored his wave of the day and drew a beautiful line, turning right across the lip of a perfect Punta peak. 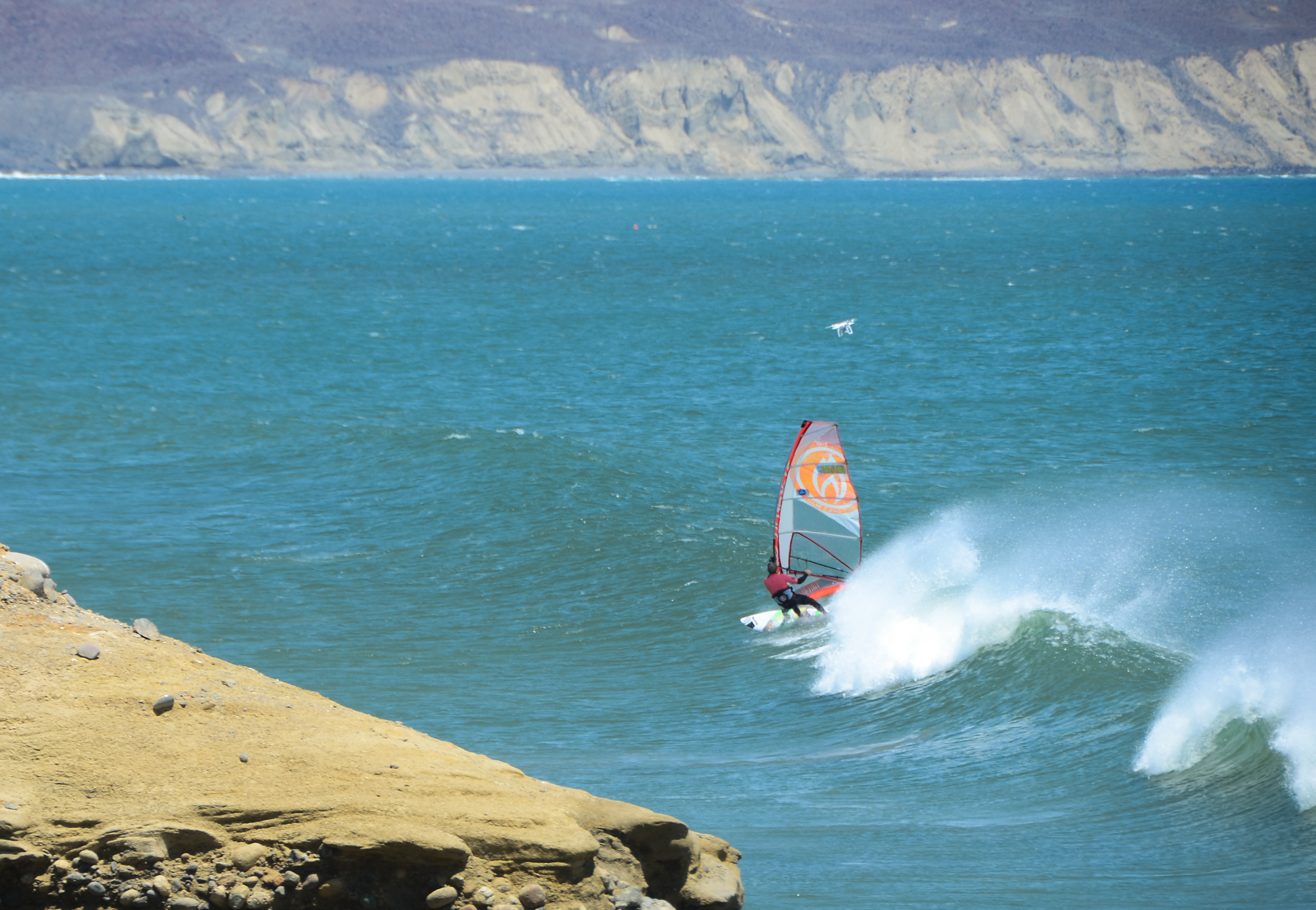 Intermission..
At this point the judges called a break for an hour to allow the tide to turn and to see if the waves would get better.

Masters 4
Heats started again at 5pm with redemption opportunities for Tem, Eric and Carl.
Everyone managed to catch great waves. Eric was looking strong with powerful riding down the length of the wave. It was enough to earn him the last place in the Master’s final, with Carl 2nd and Tem 3rd.

Amateur 7
The first heat of the 3rd round (last 8 riders) in the Amateur division.
No easy heats at this stage of the contest, with all the remaining sailors capable of catching and exploiting the best waves. Mother Nature was just not producing worthy conditions and the judges wisely cancelled the heat after 10 minutes. All the sailors were happy with the decision and are looking forward to running it again in better conditions.

So that wrapped up day 3 of the 2016 Baja Desert Showdown, another 8 heats run and everyone in Punta San Carlos excited for more great conditions on day 4…