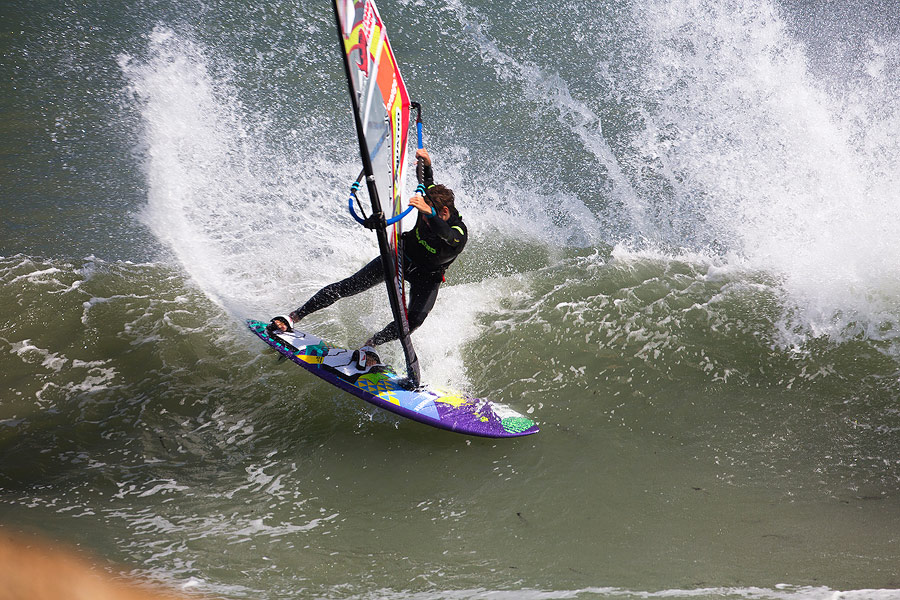 The 2013 AWT Quatro Desert Showdown in Punta San Carlos will go down as the most epic Pro/Am wave events in history. Day 4 saw more waves and even more wind with competitors competing on sail sizes from 4.5 down to 3.5. Plus the long heat lengths and super fair “second chance” bracket system has kept a smile on every riders face. Let’s check out the final action.

Pro highlights: With the wave rolling through at the point and tons of wind it was time to get going with round 3 of the Pro division. The pressure was on as from now on only the top two riders from each heat would remain in the contest. Taking the top spots in this round were Camille Juban, Levi Siver, Morgan Noireaux and Keith Teboul, while also advancing with 2nd place scores were Russ Faurot, Jake Miller, Bernd Roediger and Kevin Pritchard. 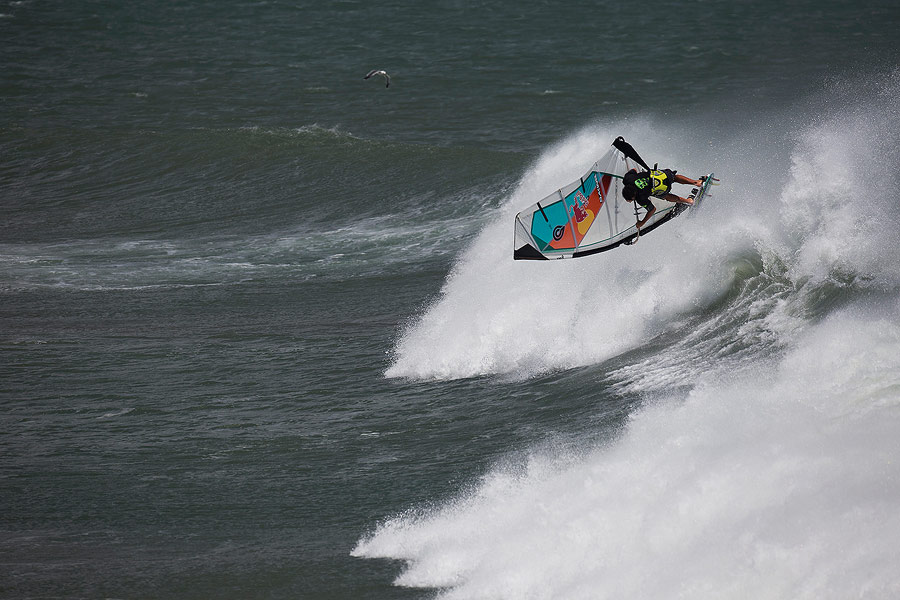 The quarterfinals started with a heat featuring Juban, Siver, Faurot and Miller. Siver took the heat laying down some massive gouges in his set waves and landing some huge aerials. The battle for the other advancing spot was close as Faurot and Miller both hit some massive aerials while Juban crashed going for a couple extremely late hits on a couple huge point waves. But Juban scored big on a nice set wave late in the heat giving him enough to advance.

The second quarterfinal was an absolutely stacked heat featuring Noireaux, Roediger, Teboul and Pritchard. A battle of the young guns versus the older guard! Noireaux took the risk of waiting on the outside for only the bigger set waves to roll in, but none appeared until late in the heat, with not enough time for him to score two waves. Roediger sailed a nice heat catching some nice waves, but the experience of Teboul and Pritchard showed through with them knocking the teenager, Roediger, out of the contest. 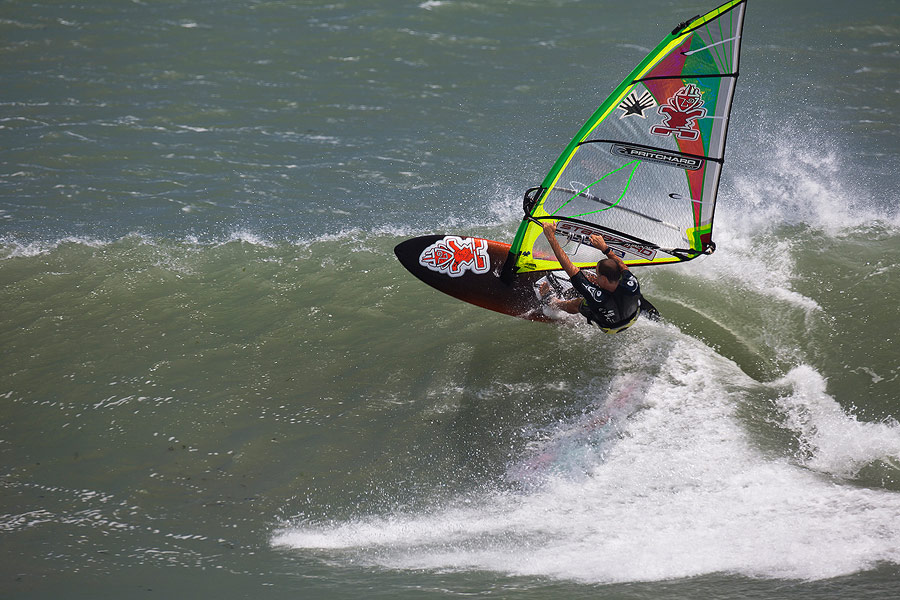 The semi-final heat was possibly the best heat of the entire contest in terms of talent and conditions. The wind was up, the set waves were rolling through and the heat featured Juban, Siver, Pritchard and Teboul. And what a show they put on! Teboul battled hard but didn’t quite find the waves the others did and finished the heat in 4th position; however, his stylish turns on each wave seem to lay down the scale for which all turns should be judged in a windsurfing competition… you want to turn like Teboul. The fight to advance was extremely close between the other three riders. Part way through the heat Siver landed an insane Air Taka on a nice wave that seemed to clinch his spot in the final. It came down to Juban’s huge head-dip aerials versus Pritchard’s powerful roundhouse turns. Pritchard even stuck a one-footed aerial right in front of the judges, but it just wasn’t enough to take down Juban. So the final was set: Siver versus Juban!

The final started with both Siver and Juban catching some moderate size waves and putting down similar scores. It looked like Juban was searching for massive aerials while Siver was concentrating on his powerful wave hacks. Part way through the heat Siver caught a nice scoring wave but couldn’t hold on to his Air Taka attempt in the Chili Bowl. Juban took advantage landing a nice one-handed aerial at the point with another clean aerial in the Chili Bowl. It was definitely a tough heat on the judges… who would come out on top? No one knew until the awards ceremony. In the end event announcer/beach marshal Tony Litke called out Camille Juban as the winner of the 2013 AWT Quatro Punta San Carlos Desert Showdown. Congrats to both riders on an insanely close and entertaining final heat! 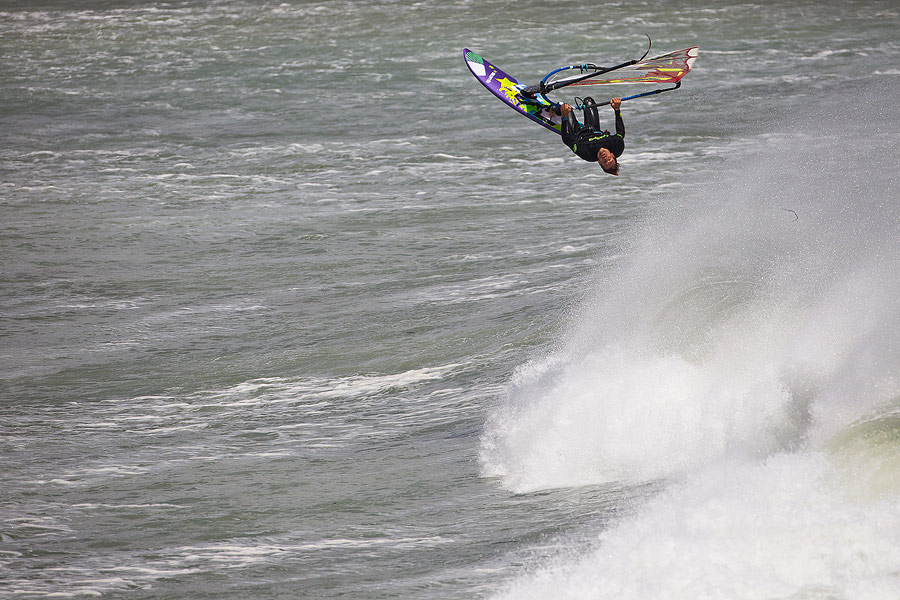 Women Final highlights: It was once again time for the battle of Ingrid Larouche versus Fiona Wylde in the Womens division of the 2013 AWT tour as they met in the finals both at Santa Cruz and Pistol River. Unfortunately it wasn’t the best heat for set waves and both riders were seriously overpowered, but still both made the most of the conditions. Larouche started the heat off with some slashy cut-backs on a couple smaller waves that were just a little more complete then Wylde’s. However, Wylde’s turns and wave selection improved as the heat went on making it extremely close. Following the heat neither rider nor spectators on the beach knew who won. In the end Larouche scored just a few fractions of a point more than Wylde to take the title. Congrats to both riders on an extremely close battle! 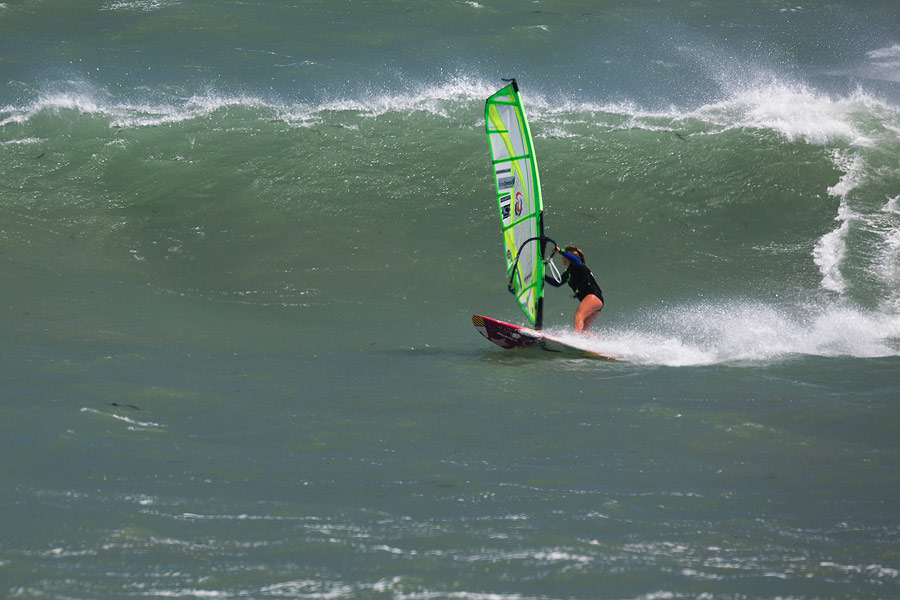 Amateur Final highlights: The day began with the head-to-head battle for 3rd place in the Amateur division between Marc Bitoun and Eric Sinclair. Both riders scored some epic rides but Bitoun’s near-pro-level riding gave him the edge to claim the final podium spot.
The Am final was a battle of differing styles… Tom Soltysiak’s surf-style with aerials versus Ruben Lemmens’ power wave riding. Halfway through the heat Lemmens scored a monster wave and made the most of it with nicely completed roundhouse cut-back turns for the heat’s biggest score. Soltysiak landed a super smooth aerial right in front of the judges but it wasn’t enough to overcome Lemmens’ wave-of-the-day. Congrats to Lemmens for winning the Amateur division and to Soltysiak for claiming 2nd in his first every wave contest. 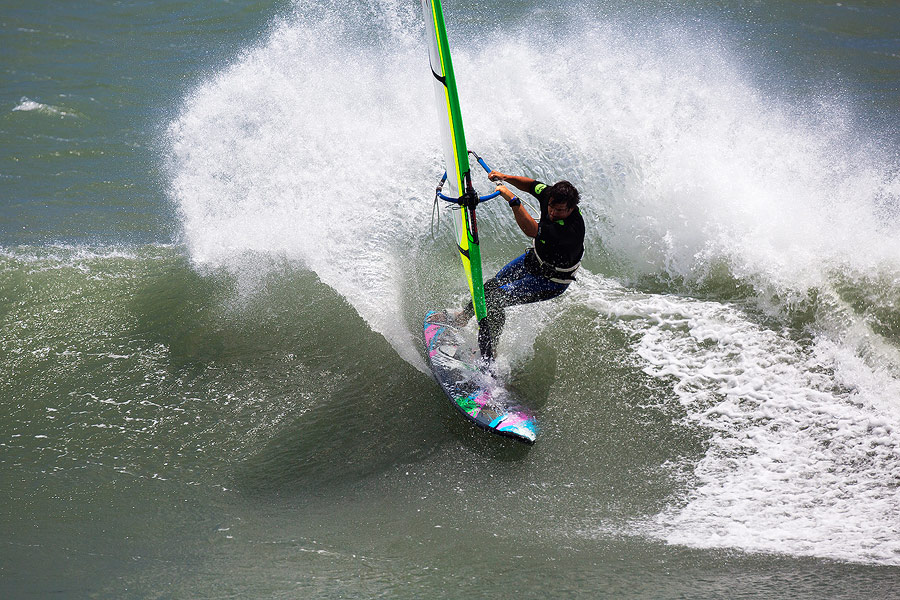 Masters Final highlights: This was a highly anticipated final of the AWT’s overall Masters division leader, Ferdinando Loffreda, versus Norm Roediger. Both riders have been also been competing in the pro division and have been ripping this week. Loffreda started the scoring off catching some smaller waves on the inside of the point and laying down some decent turns and aerials, but Roediger’s strategy of waiting for the bigger set waves on the outside seem to pay off. Roediger took the heat with some massive rides with powerful cut-back turns all the way from the point through the Chili Bowl. Congrats to Roediger on the win and Loffreda on a great final heat.

Youth Final highlights: The final of three youth heats saw these two young riders catching some epic rides on monster set waves. Fiona Wylde, who has been competing in three divisions this week, really has this break dialed and took the heat with some incredible turns…plus she’s now added an aerial to her bag of tricks. Alex McKirgan rode some huge waves and has definitely improved as the week has gone one putting in nice slashy cut-back turns in the critical parts of the wave. Congrats to both riders on a great final heat. 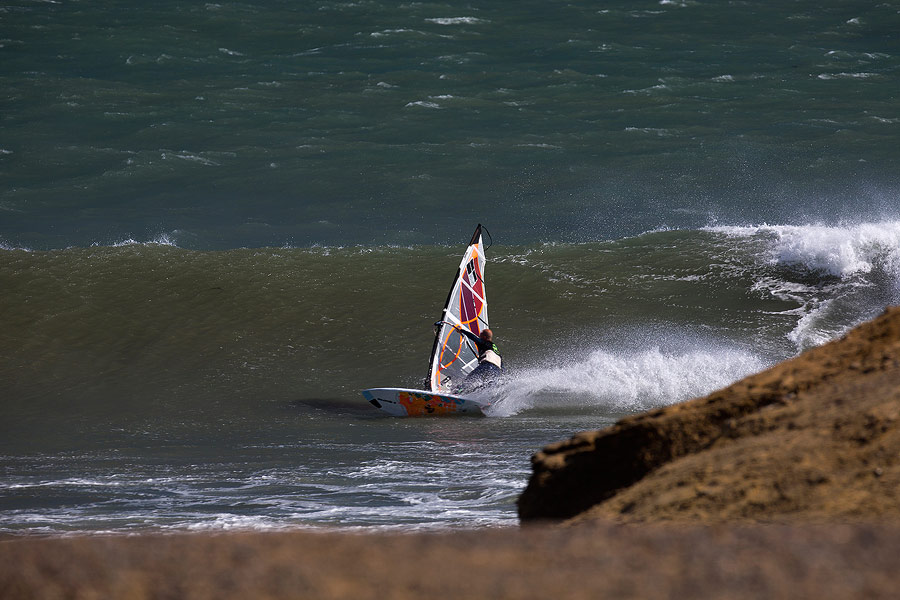 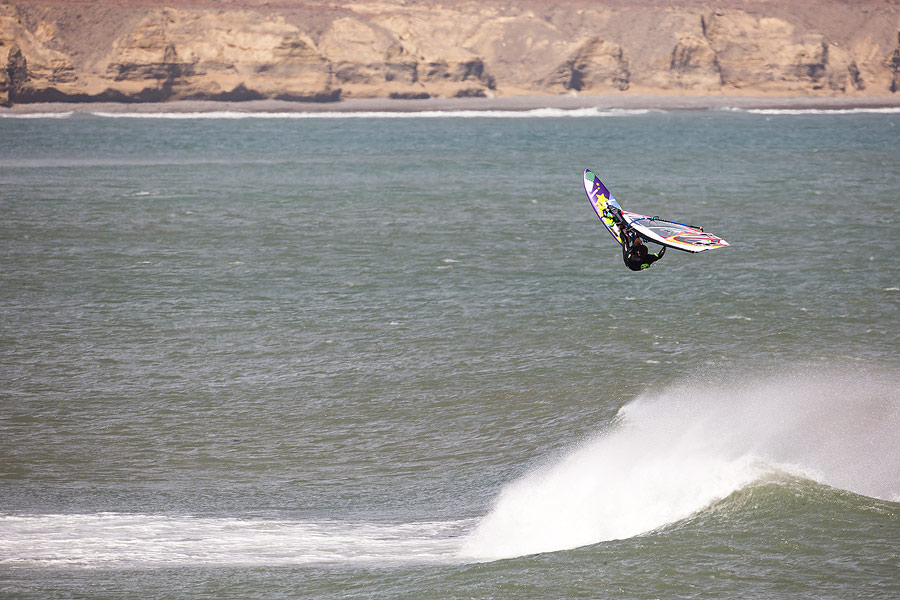 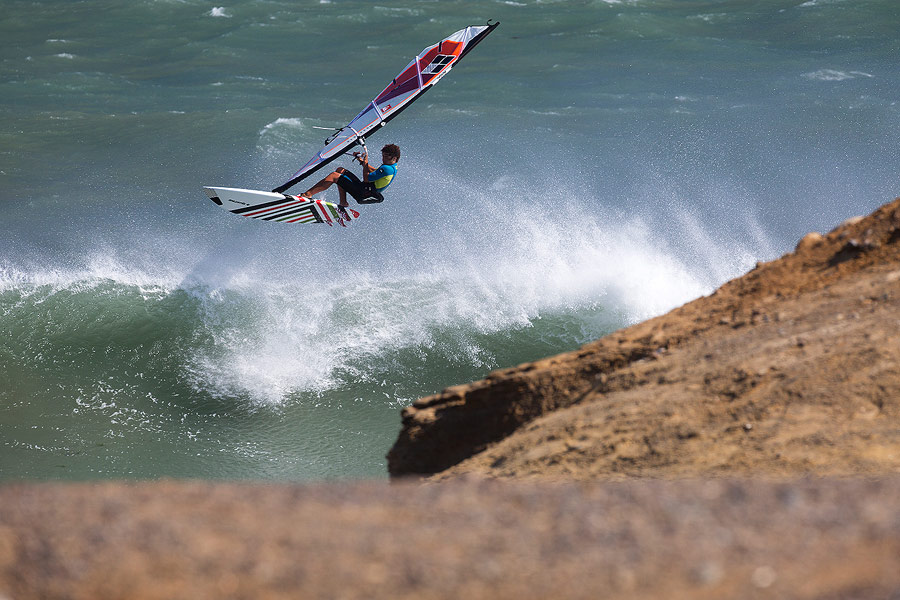 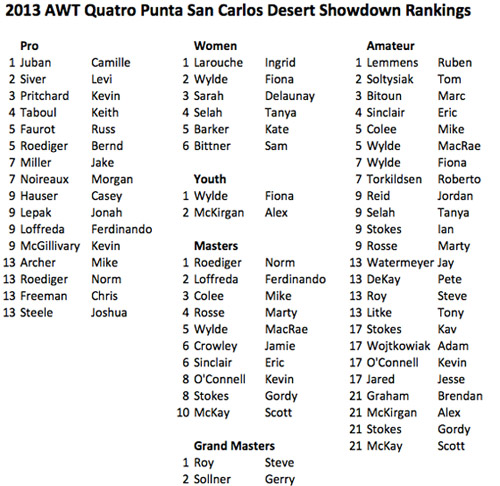