Busy day at the Punta..‏ 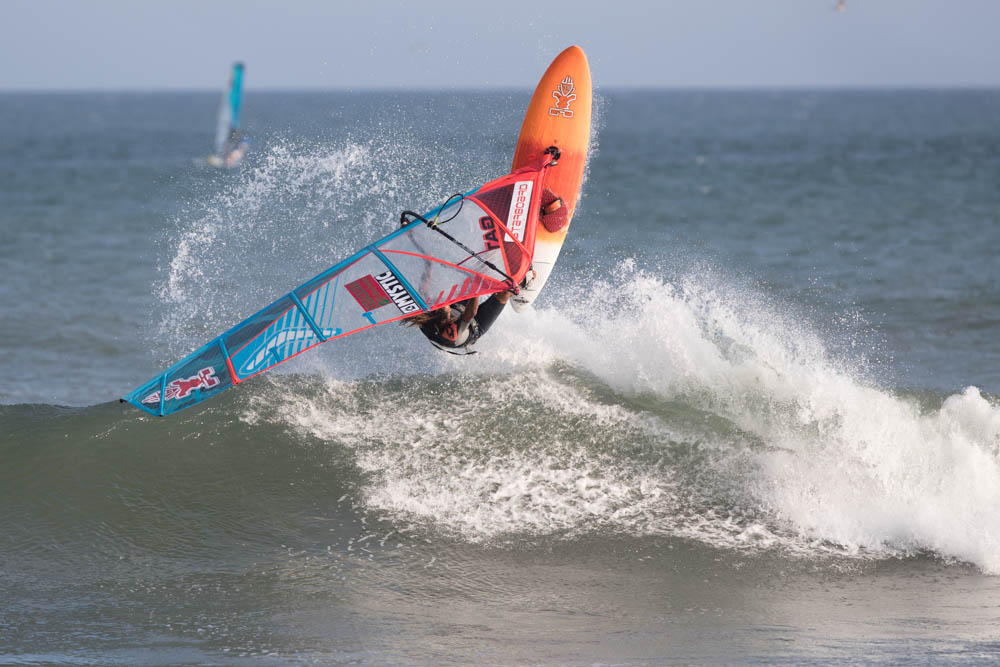 We awoke to see more beautiful sets wrapping in at the Punta. The wind filled in as promised and the judges called a contest start time of 2pm, first up was the re-run of last night’s Amateur 7 heat..

Amateur 7
Olivier Meline held position off the point during the 2 minute transition and opened the day’s action catching a wave as the green flag went up. Ishii Takara followed with some solid turns on a Punta wall. Next up was Jeff Allbright carefully picking set waves and riding them all the way past the judges to the Chili Bowl. Owen Barnhart was right behind him on the next wave of the set. The 18 minute format allowed all the riders to find their waves, with Ishii’s last drop in the final seconds he found room for a couple of slashing turns at the point before wisely kicking out.
Ishii 1st, Jeff 2nd, Olivier 3rd, Owen 4th 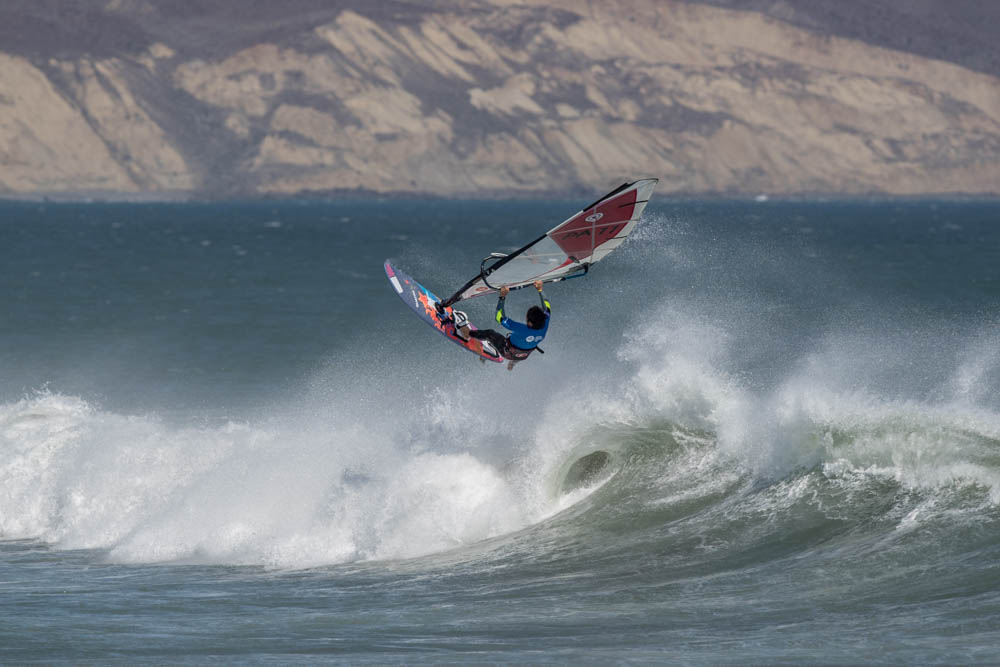 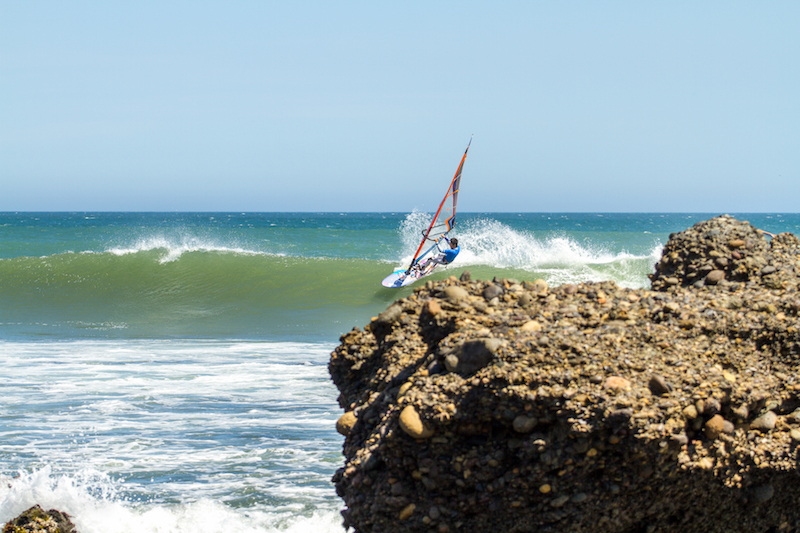 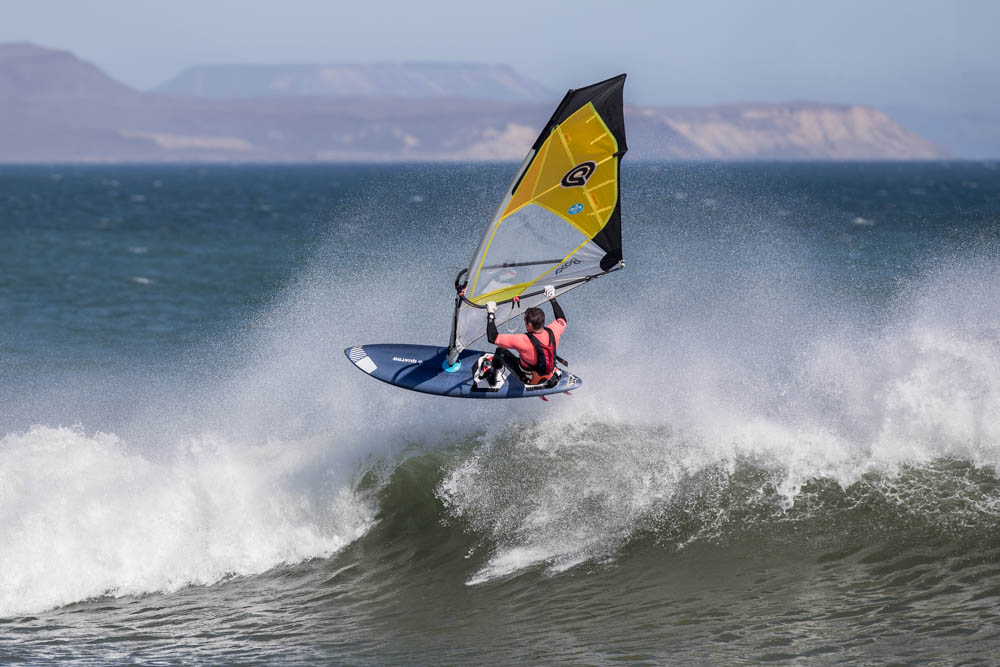 Amateur 8
Eric Sinclair and Alex Mckirgan had a priority tussle for the first wave, with Eric finally getting the ride from his windward postiion. Jonathan Pooley was waiting for big waves at the point, dropping late for a couple of hacks but not managing to connect them past the point. Alex sailed out to the horizon looking to be first on the swell line. The tactic worked, good wave selection and and well executed, aggressive turns . Max Schettewi had a quiet start but found form in the second half of the heat.
Alex 1st, Max 2nd, Eric 3rd, JP 4th 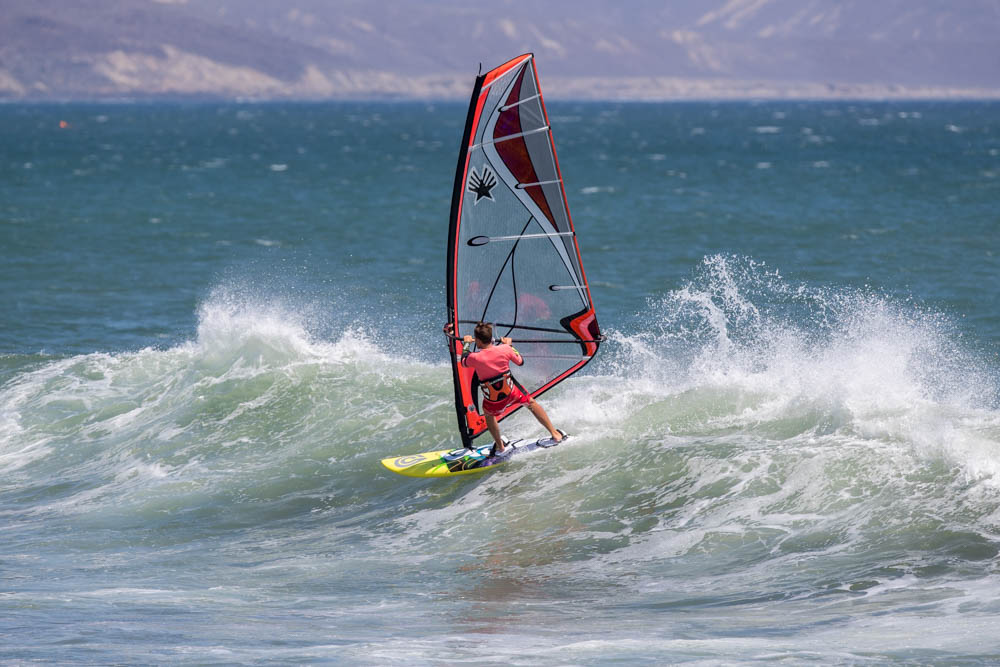 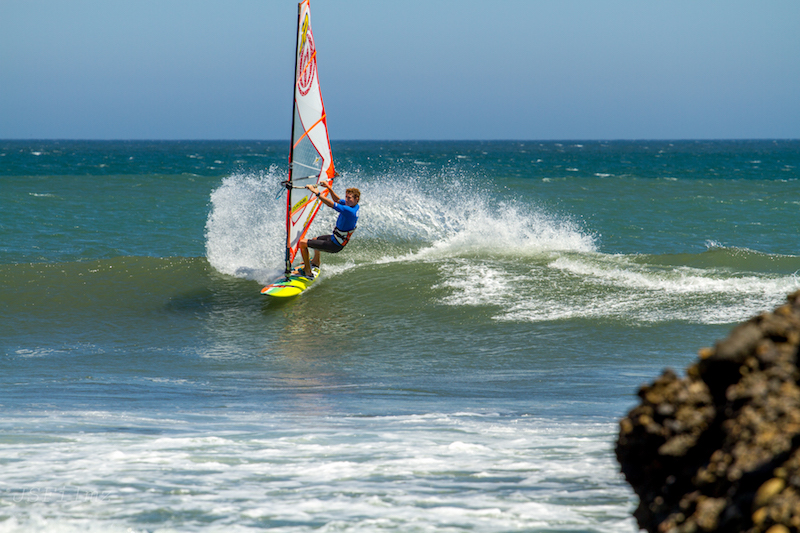 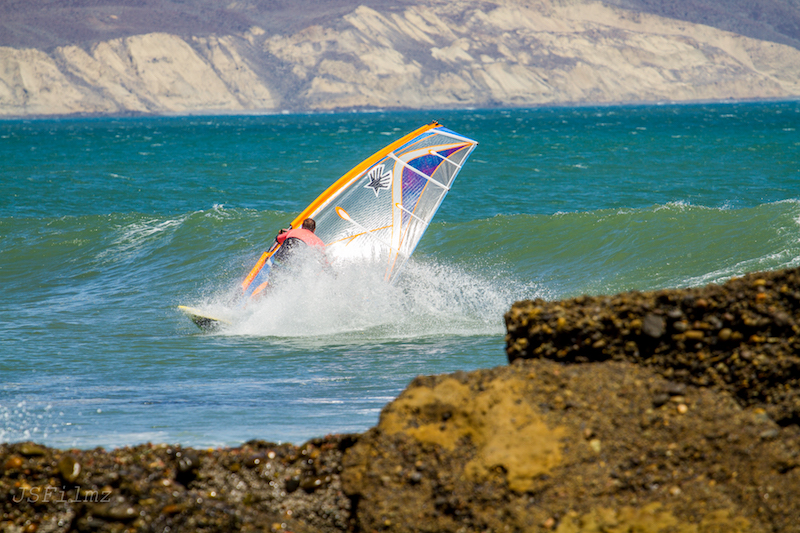 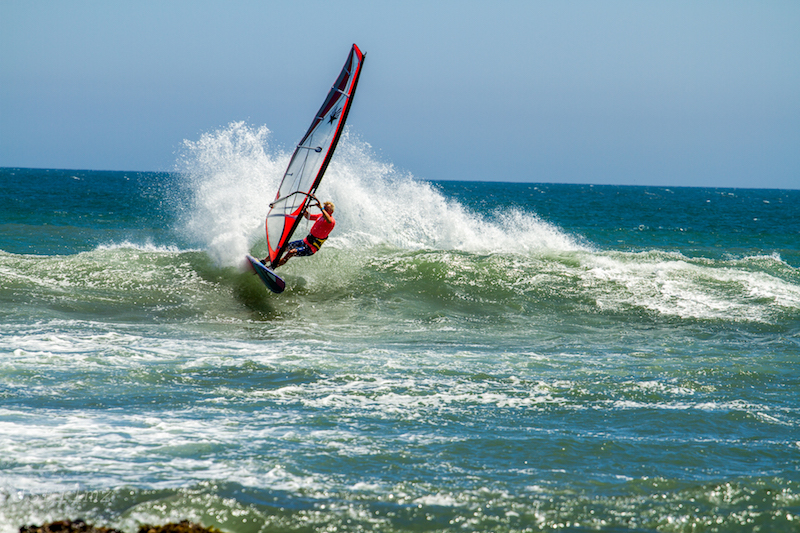 Youth 3
Redemption time for the young guns. 12 year old Z Schettewi opens the heat, launching down the face of a huge point wave, but flying out the back of his top turn.
Alex Mckirgan’s Baja experience shows as he sailed this back-to-back heat, choosing solid walls and working them way down in to the bowl. Ishii Takara’s Baja learning curve has been pretty steep! He is catching great waves from the right spot, carving full-rail turns just off the rocks, then riding hard into the bowl, getting late hits and aerials with impressive style and control at age 15. Z’s confidence was growing as he started to sail waves all the way from the point to the bowl. He sometimes looked overpowered on the wave face with his 3.4, but he was gaining plenty of valuable contest experience.
Ishii 1st, Alex 2nd, Z 3rd 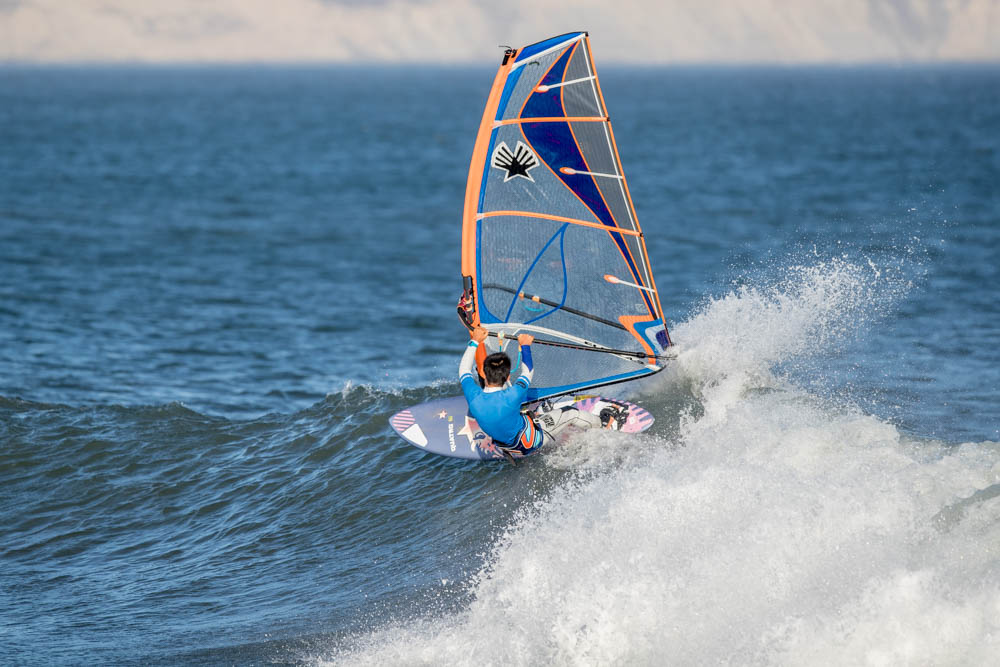 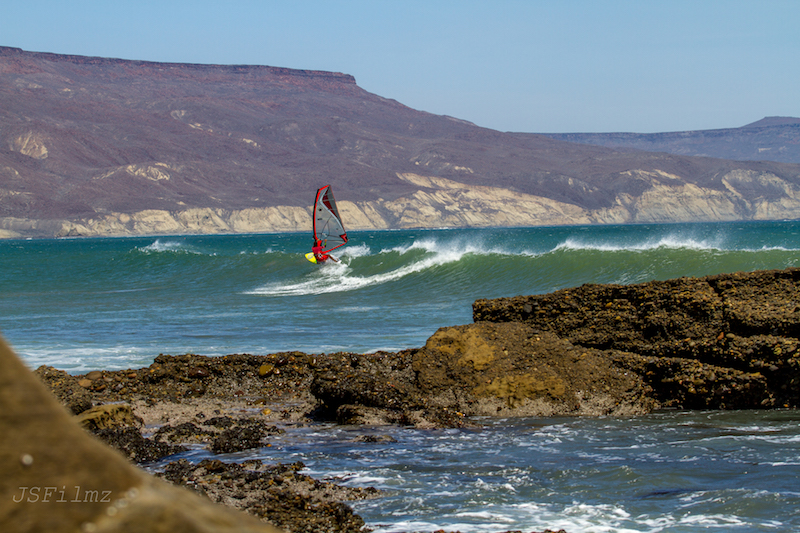 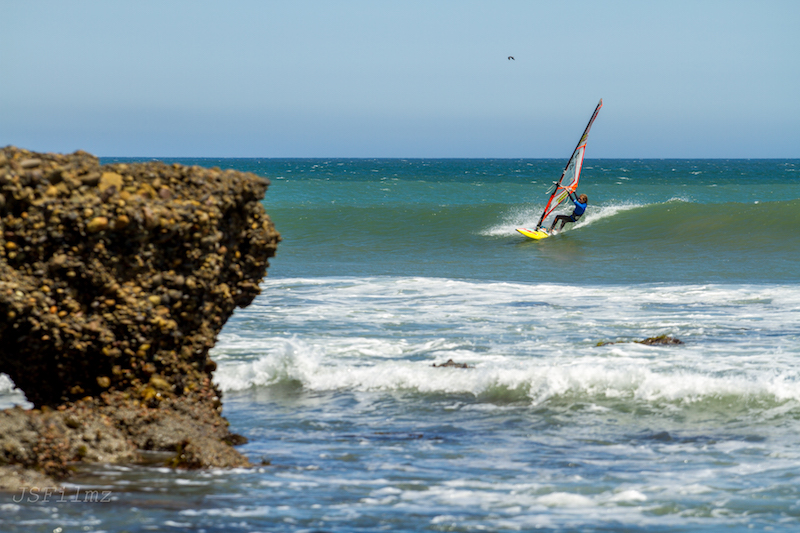 Grand Masters 3
Another duel for Colby Deer and Dwight Bode. Some good sets came rolling through this heat, with both sailors taking advantage. Dwight was upwind from Colby on the first set and snagged a great wave to take him all the way down the coast! Colby was enjoying the Baja climate having travelled here from Sweden, finding some great warm waves to turn on.

Amateur 9
A last shot at the final for Jeff, Eric and Owen. The swell seemed to back off a bit making wave selection critical. Eric picked a promising A frame at the Punta but it faded out after a couple of turns. Jeff had better luck with the one behind which he connected all the way. Owen and Eric both found good ones in the final minute and worked them right to the end. Jeff’s experience here is allowing him to get the waves he needs to showcase his riding and secured his place in the Amateur final.
Jeff 1st, Eric 2nd, Owen 3rd 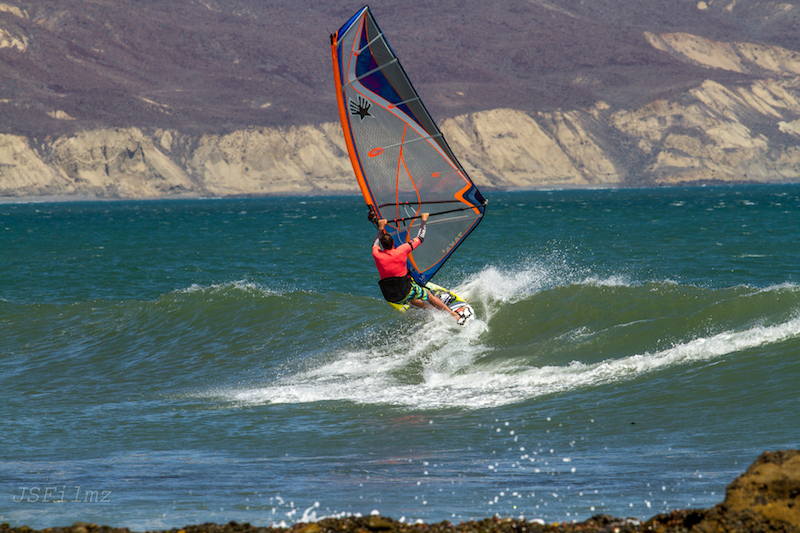 Amateur 10
One last spot in the Am final up for grabs. Olivier was already throwing powerful turns at the Punta as the flag went up. Max got the next one and got a solid ride with stylish turns. JP was right behind him, risking late hits then boosting a big aerial but crashing over the back of the wave and then paying the price, swimming for a couple of valuable minutes in the impact zone. Olivier found his second wave and slashed turns down to the racetrack section looking for his ramp for an aerial. He arrived at the lip quite late and appeared surprised by the altitude he found himself at, one of the more spectacular crashes of the day, but sadly the judges do not award points for these.
To close the show Max took off on the best wave of the heat and rode it like he stole it. His consistency won out over the slash and crash antics of his competitors, earning him that slot in the final 4.
Max 1st, JP 2nd, Olivier 3rd 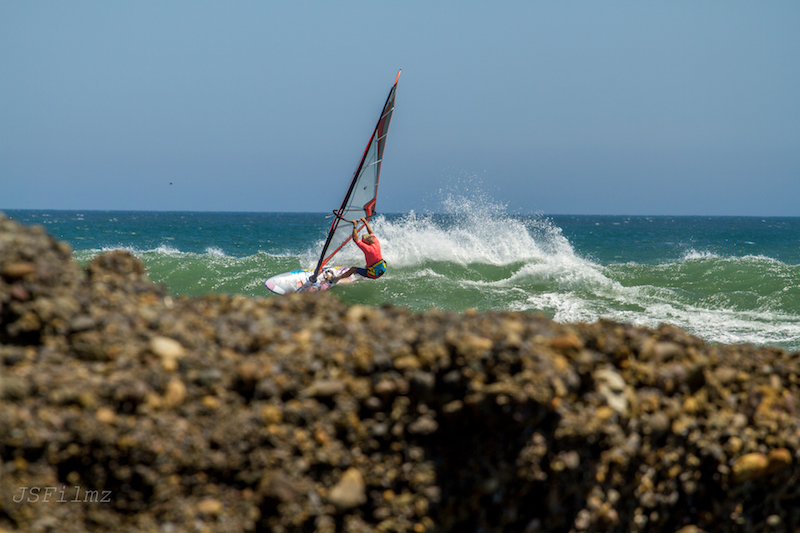 Pro Women 2
The girls scored the best waves of the day as the swell pumped through this heat. The slight change in swell direction and the lower tide was setting up the waves close to the rocks. Sarah Hauser and Ingrid Larouche were trading great rides on solid set waves. Both women riding with style, right in the critical part of the wall.
Ingrid’s powerful late hits and Sarah’s flowing, surfy turns. A tough heat to judge but so great to watch. 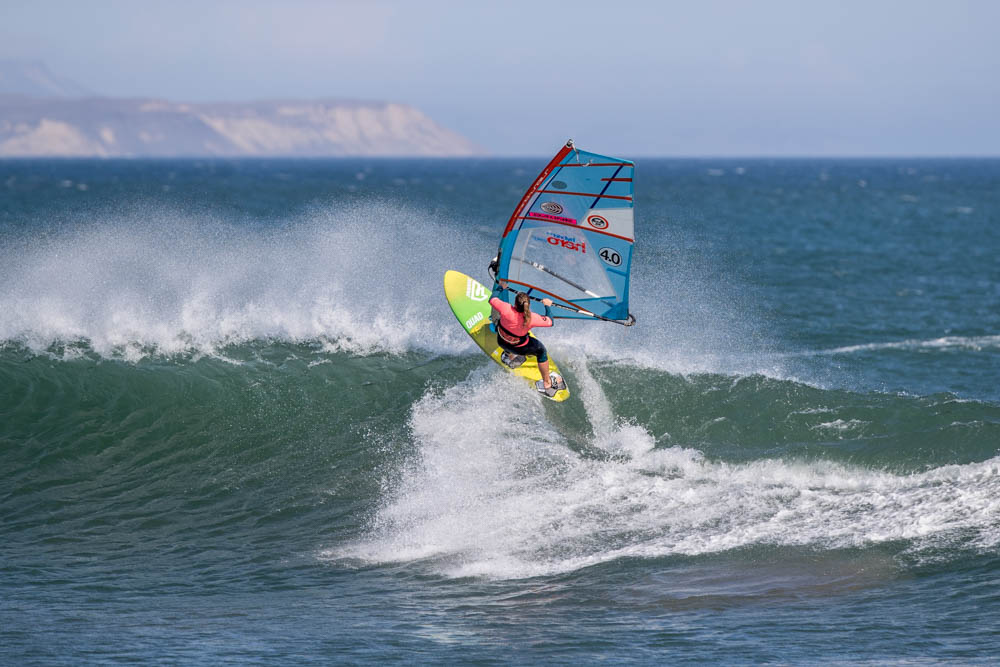 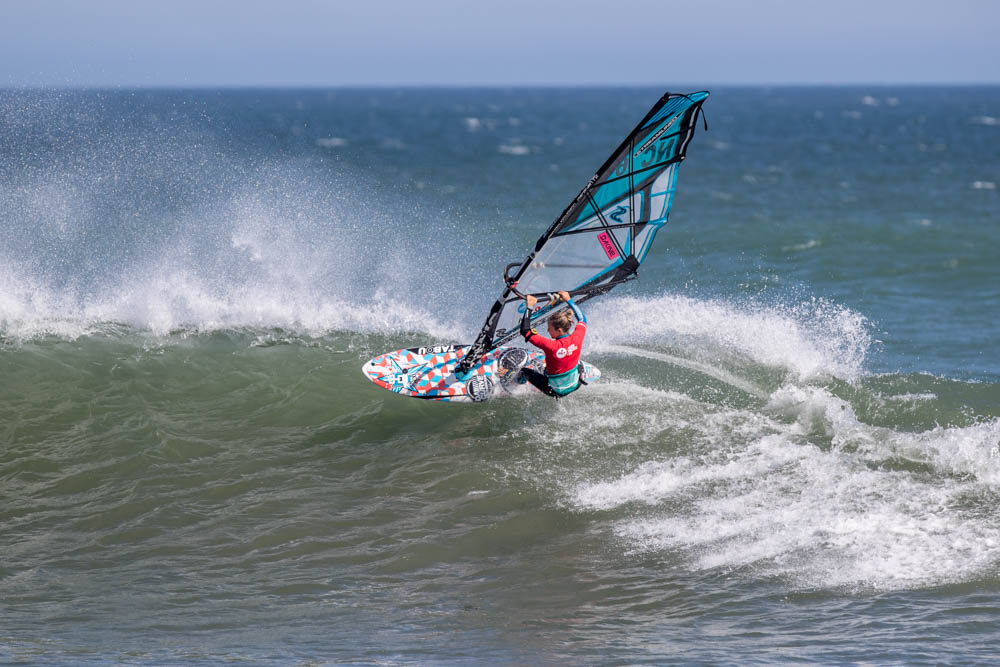 Amateur Final
A tense final saw the four riders hunting for waves which seemed a little harder to find than in the previous heat. Jeff Albright’s local knowledge once again scoring him great rides and holding his own against the talented youth squad. Alex, Max and Ishii all on form and throwing turns and aerials as the sets came through.
Everyone found heir waves and rode hard. An intense 18 minutes and the final result will be announced at the end of the event. 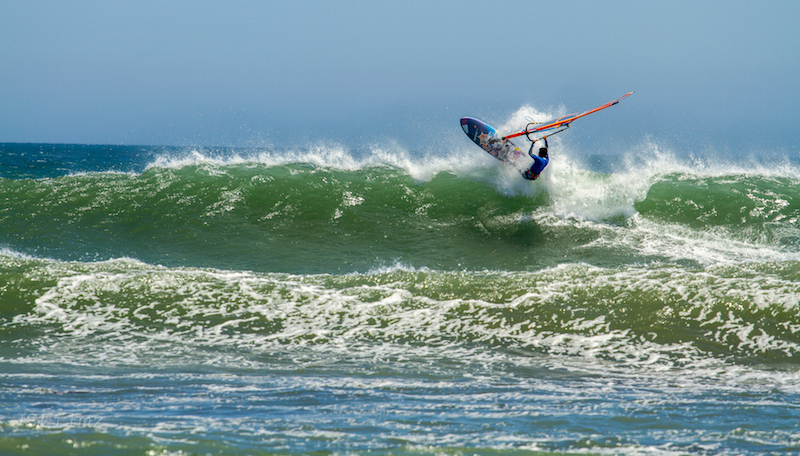 Pro Men 3
The first Pro heat sees Boujmaa Guilloul from Morocco, Robert Torkildsen from Norway and Jake Schettewi from Maui.
At age 15 Jake has already racked up plenty of San Carlos waves and he found a great set to open the heat. Classic late hits at the peak and then a flowing ride connecting around the bend to stick a smooth, classy aerial right in front of the judges tent.
Robert qualified to sail with the pros after last year’s amateur finals. This year he decided to push himself and sail at the highest level. He jumped on the wave after Jake’s which looked to be the best of the set. Fading in to a late drop, he charged the upper section and carved his way down to the tricky finish in the chili bowl.
Boujmaa found himself a logo high peak and surfed his trademark tight, flowing turns leading in to playful aerials, great fun to watch.
The show continued with all 3 throwing themselves and their gear into every possible turn. Robert got taken out in the Chili Bowl with a heavy close-out.
Boujmaa 1st, Jake 2nd, Robert 3rd 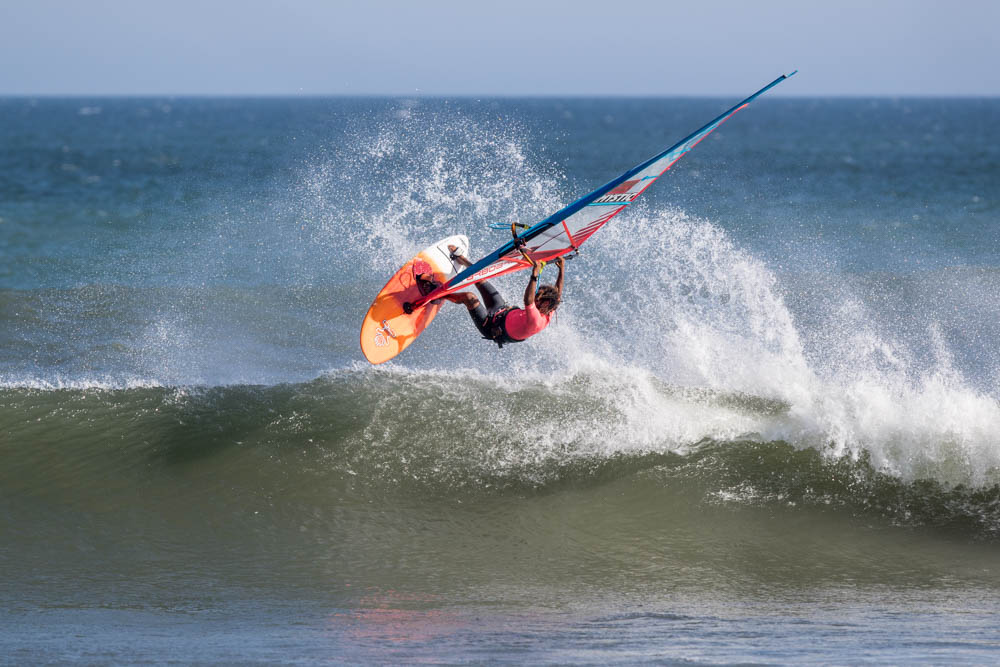 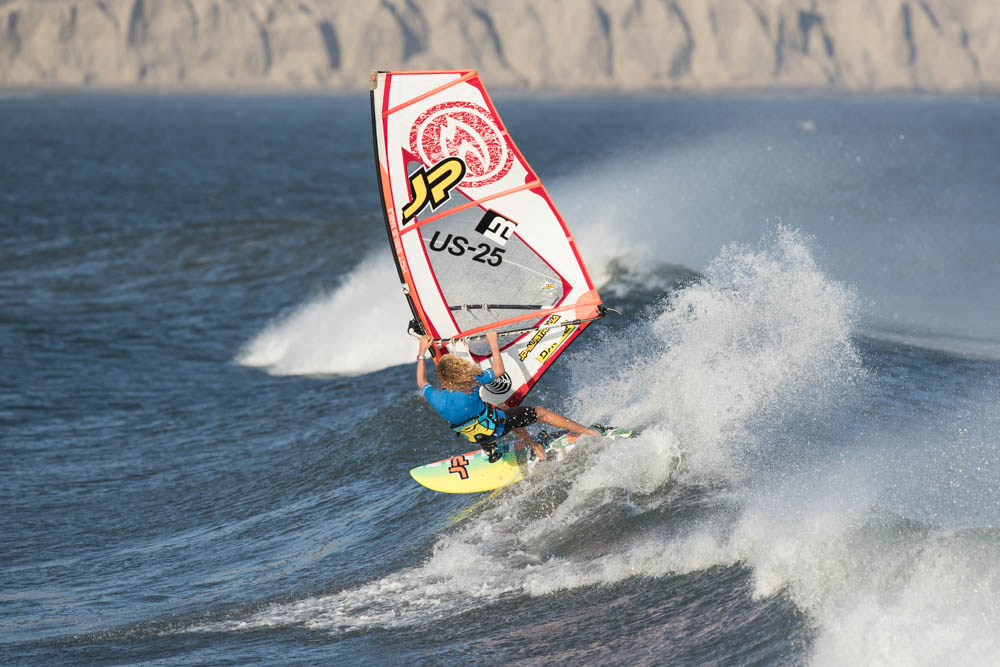 Pro Men 2
Russ Faurot missed this heat due to a back injury, leaving Max Schettewi, Casey Hauser and Kevin McGillivray to enjoy the conditions.
Casey worked his waves hard but couldn’t find the big wall he needed. Even on small waves his super stylish bottom turns are a standout. His big aerial attack was impressive to the crowd but landed out the back of the wave, so was not scored by the judges.
K-Mac picked the biggest two waves of the heat and stole the show with his savage vertical attacks on the lip.
Max went way out to sea searching for his wave and came back on a winner, riding it all the way to the Bowl. His style is developing fast but did not match the ridiing of the two more experienced sailors in this heat.
K Mac 1st, Casey 2nd, Max 3rd 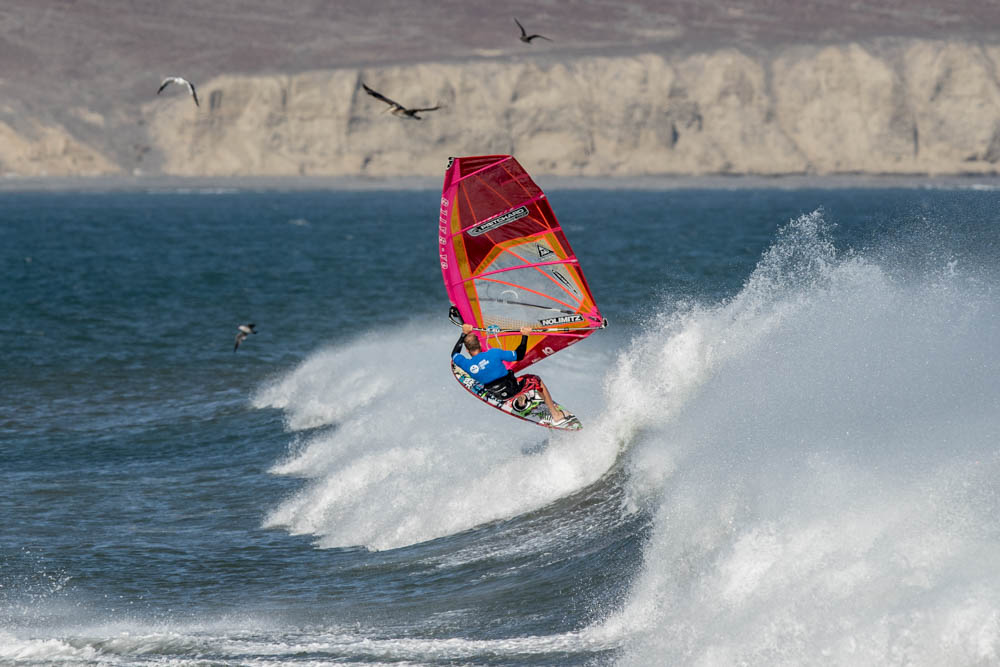 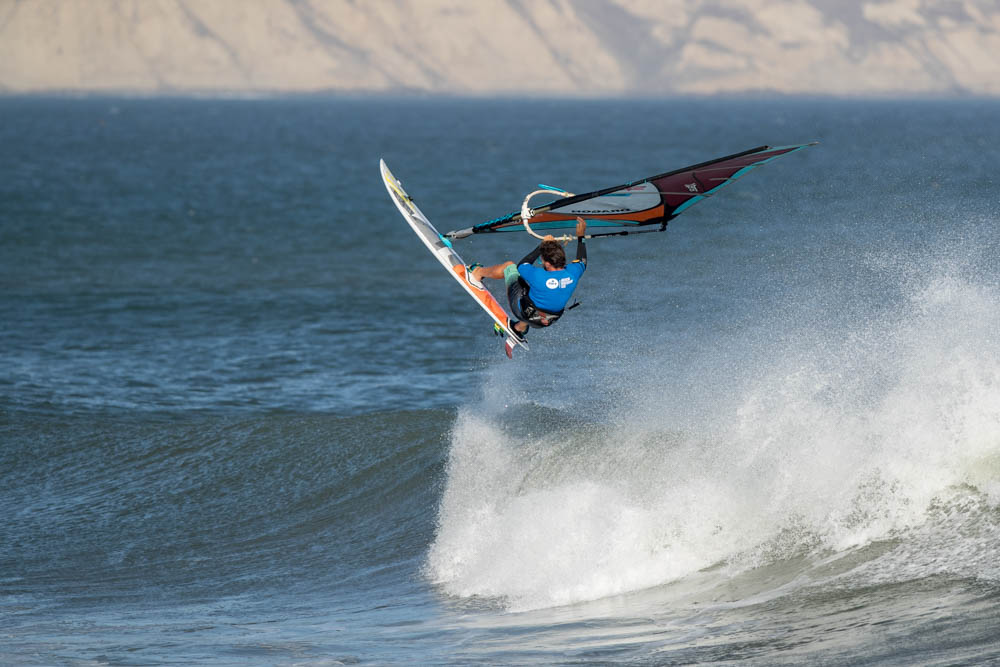 Pro Men 1
Local Legend Joey Sanchez sails off the beach like any other day in San Carlos. Except that today he’s sailing in a heat against Kevin Pritchard and Ferdinando Loffreda.
Joey was amped, attacking the lips with his hard-charging, expressive style. Maybe too hard, as some of his best moves exploded out the back of the wave.
Ferdinando was searching hard for waves, picking one to take him screaming down the line to a fine aerial finish at the bowl. KP was also hoping for more set waves, but he was able to work with what came through and make them look spectacular.
KP 1st Joey 2nd Ferdinando 3rd 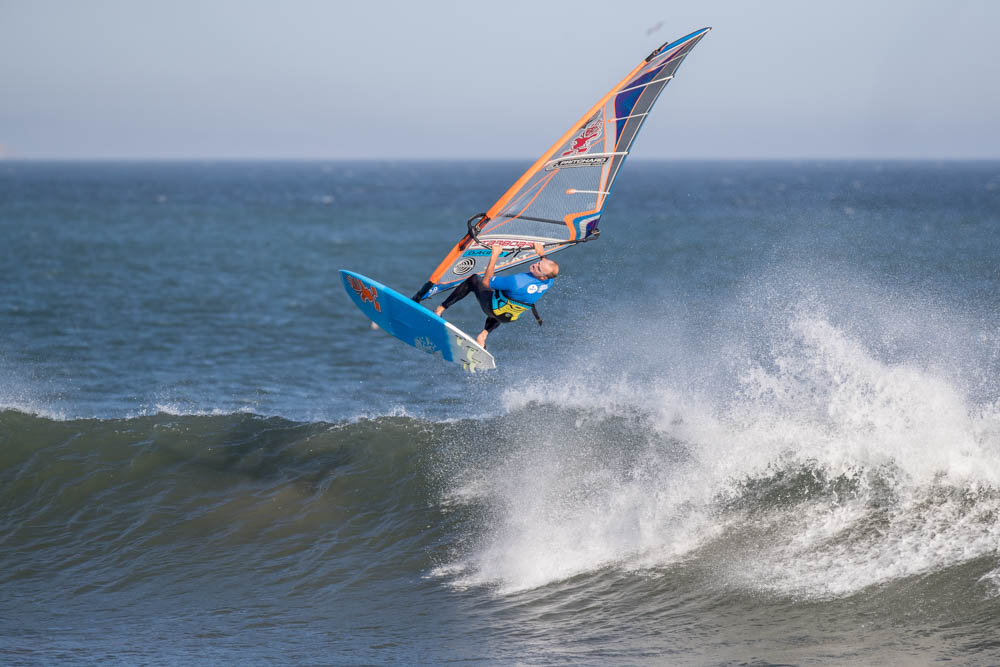 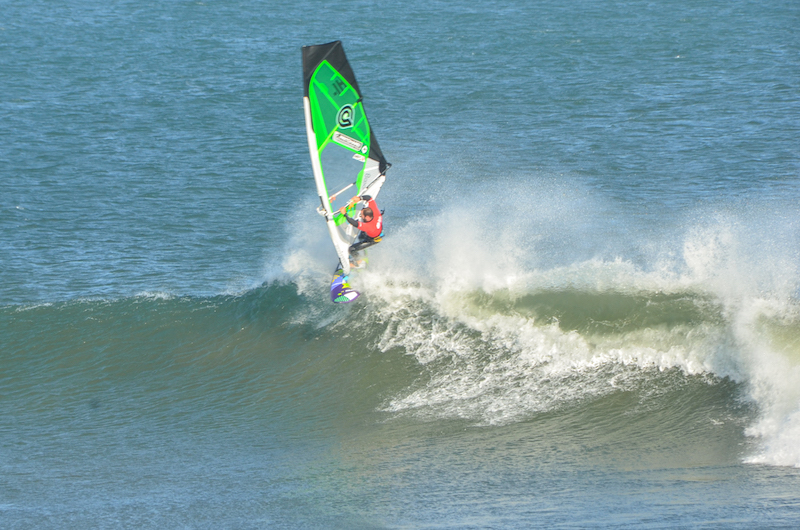 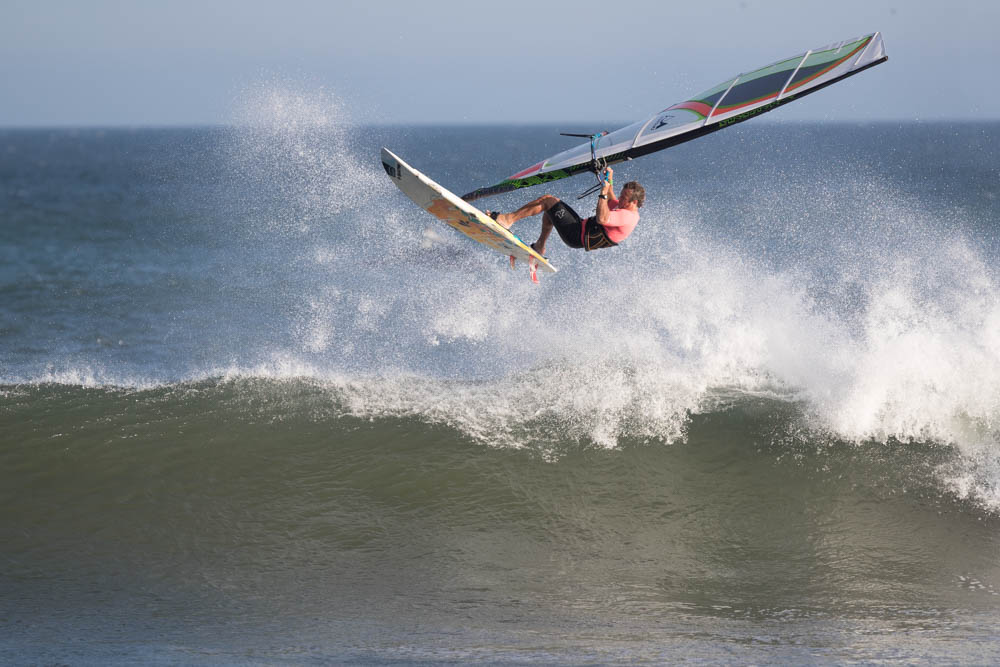 Masters Final
Jeff Allbright, Jonathan Pooley, Eric Sinclair and Ferdinando Loffreda sail out to finish the Masters contest in tricky conditions. The ocean seems flat to the horizon, the minutes tick by. Finally a three-wave set arrives. Jeff, JP and Eric all catch one and the heat comes alive. But waves remain hard to find. Jeff finds the best of them and carves his way down the racetrack landing two aerials.
The result is to be announced at the end of the event.

Youth 4
The last heat of the day sees Ishii, Jake, Alex and Max in the four-man final.
Ishii impresses everyone with his uncanny wave selection ability. And once he gets one, he charges. For Max this was was his 5th heat today but no sign of fatigue as he picked off good waves and linked his turns down the line, also surviving a trip to the rocks unscathed. Alex found a great wave to get his slashy turns at the peak followed by a long ride, carving his way down to the Chili Bowl.
Jake was dropping in deep at the Punta and putting hard turns right in the pocket.
Great riding from the 4 finalists, result to be announced. 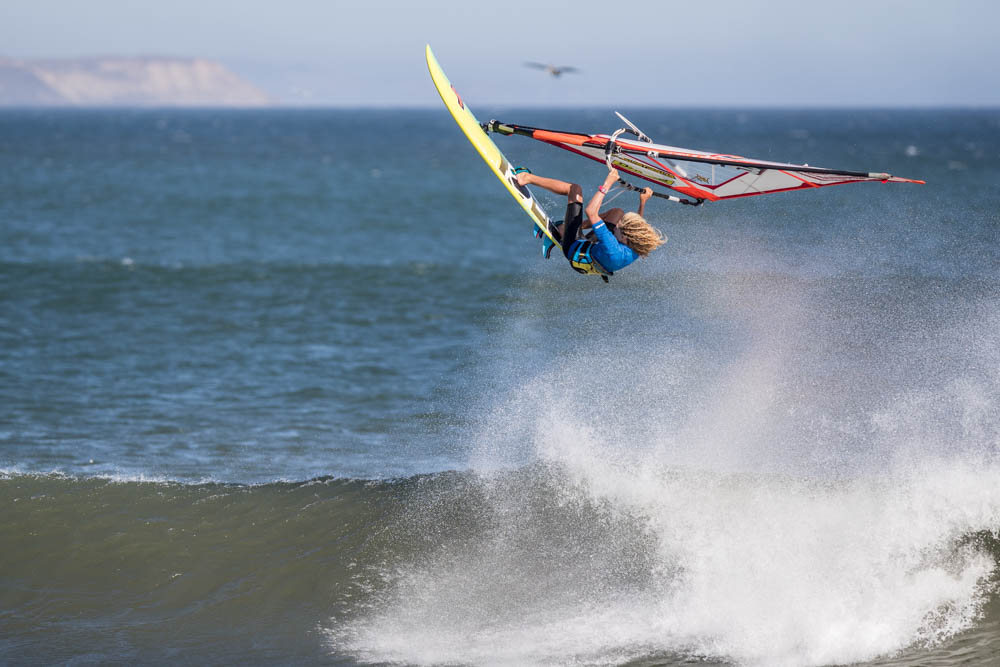 That wrapped up another busy day for the AWT crew. There are lots more pro-heats to get through tomorrow!