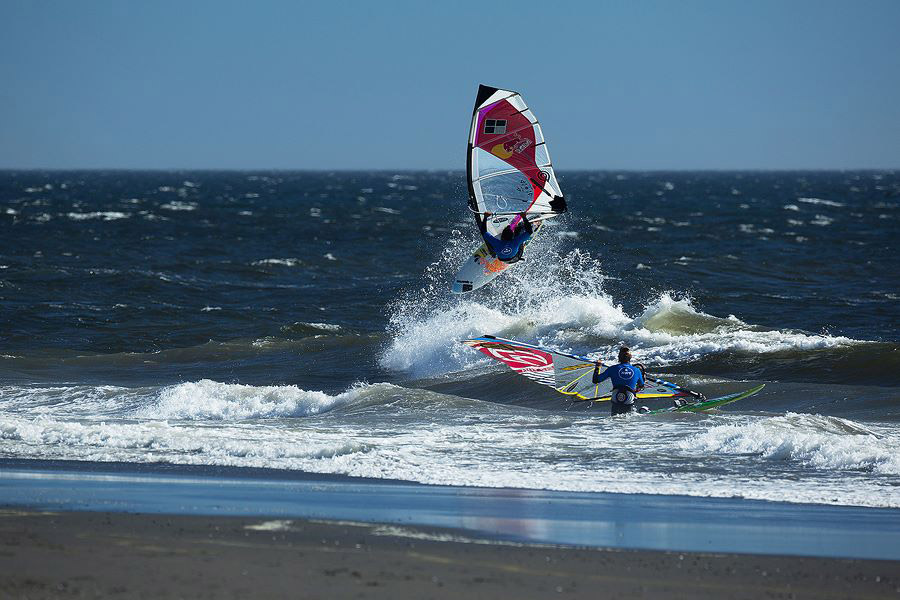 The forecast delivered for day four at the 2013 AWT Pistol River Wave Bash presented by Starboard with 20-25 knot wind. The waves were small but there was enough to get through a full single elimination bracket for all the divisions. It was a long day at the beach but it was exciting to see what the riders could deliver in such challenging conditions.

THE PROS:
The first round of pro heats was tough with no jumps counting and really the best waves breaking practically on the beach. Riders picking the best waves would get one or two hits before finishing with a slash or two right up onto the sand. Gorge area riders Sean Aiken, Nathan Mershon and Casey Hauser took advantage of their Oregon coast knowledge to advance to the semi finals along with Camille Juban, Kevin Pritchard, Levi Siver, Morgan Noireaux and Bernd Roediger. 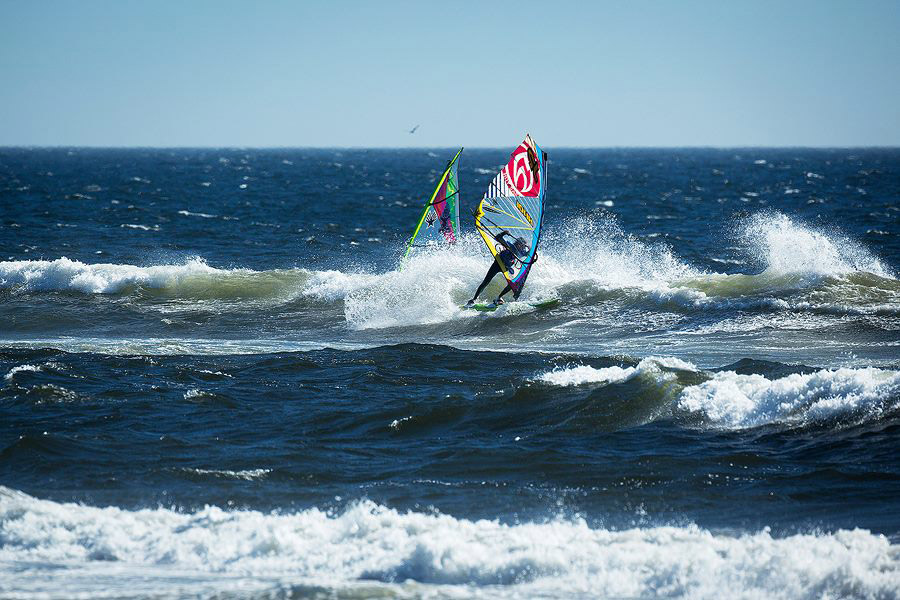 The final was extended to 20-minutes with each rider’s best two wave rides and one jump counting for their score. Noireaux opened up the scoring landing a huge Back Loop right on the start. Later in the heat he improved his jumping score with an even bigger one-handed Back Loop but the waves just didn’t seem to line up in his favor. Despite landing several Takas in the heat Noireaux finished fourth. Siver scored a few better waves, landing some nice tweaked aerials but his scores were only enough to give him third place in the end. Kevin Pritchard was on fire making it insanely tough on the judges as he was scoring in every way possible. His started the heat with a huge stalled Forward Loop and then bettered it with a massive one-footed Back Loop. He found some nice set waves and scored well with his smooth powerful style. On one wave he landed a Wave 360, and a Backside 360 on another. But in the end his scores were not enough to take down Juban, whose first jump was a nicely tweaked Push Loop. Then minutes later Juban threw down an even bigger and more tweaked Push Loop that may have been the highest scoring jump of the event. Juban was masterful at picking off the best waves of the heat, constantly getting several hits off the outer sandbar and then following the wave in for more critical hits on the beach break. Congratulations to Juban for sailing an amazing heat! 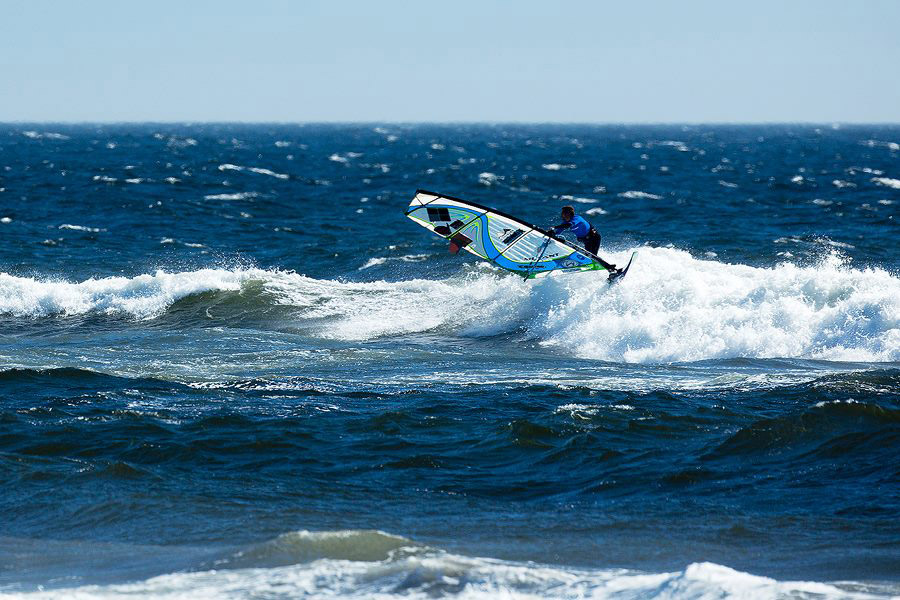 THE WOMEN:
It was amazing to see Rhonda Gill taking advantage of the friendly atmosphere of the AWT to make the Pistol River Wave Bash be her first experience in the waves. Four years ago here at Pistol River Fiona Wylde shared this same experience and now she’s battling for the podium at every event. Sam Bittner and Kate Barker sailed very well in tough conditions but just didn’t have enough to make the final. 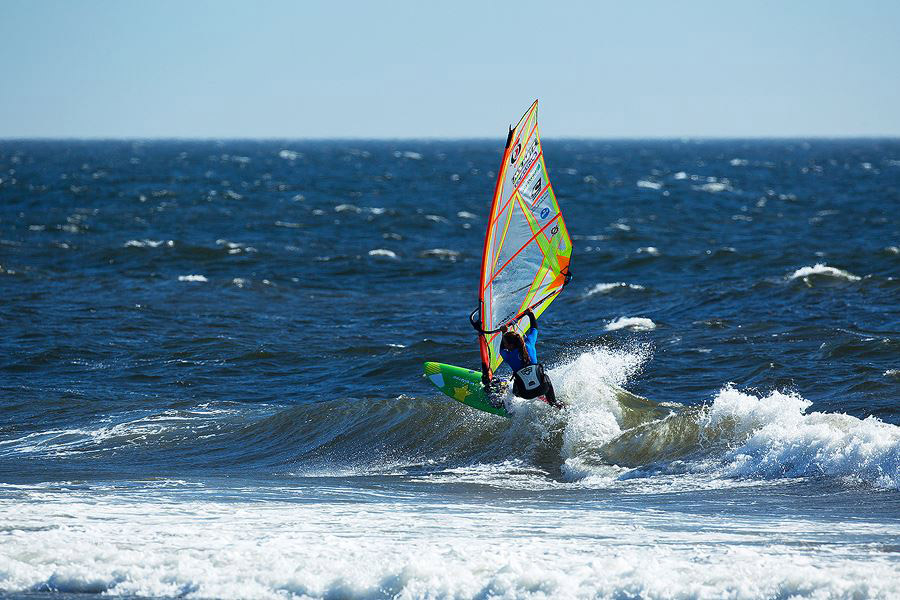 The 20-minute super final featured last years champion Ingrid Larouche against Fiona Wylde, Katie McAnena and Miho Tanaka. Coming all the way from Ireland, McAnena picked off some nice waves early riding her way to 4th position. Tanaka looked like she’s been training hard for this event as she was often in the best place to pick off the best waves. She sailed a strong heat and finished on the podium in third. For the past few event the battle between Larouche and Wylde for the top spot on the AWT Women’s podium has been fairly one sided with Larouche winning easily…but it looks like things have now changed. Larouche is sailing better than ever with an aggressive style and big Forward Loops that really impress the judges, but now Wylde has stepped up her game in a huge way with impressive wave hits and a smooth style. Wylde scored the biggest wave of the heat and ripped it apart but it wasn’t quite enough to take down Larouche who defended her title. Congrats to both for putting on an impressive 20-minute show for the crowd. 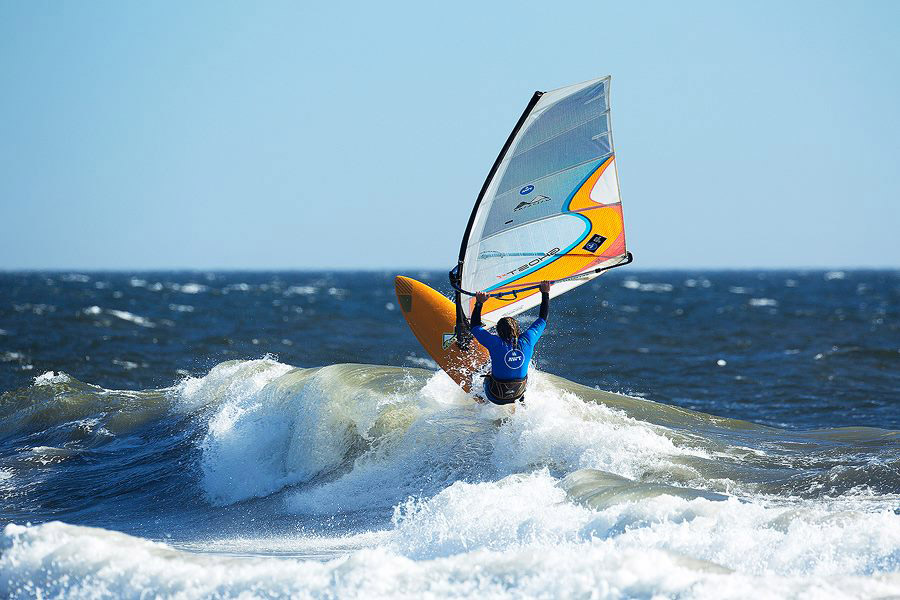 THE AMATEUR, MASTERS and YOUTH:
With 27 riders the Amateur fleet was the biggest in the competition. There were too many standout performances to mention them all and in the end it came down to a 20-minute final featuring Fiona Wylde, Casey Rehrer, Marc Bitoun and Jeff Albright. Wylde and Albright both sailed a strong heat but didn’t have the jumping scores to battle for the top two spots. In the end Albright rode the better waves to third position just knocking Wylde off the podium. Both Rehrer and Bitoun were on fire in the final. Both caught plenty of set waves and cut them apart with super critical hits. The heat was very close and may have come down to the jumping with Bitoun’s Back Loop giving him the title over Rehrer’s Forward. Congrats to all the riders for sailing an impressive heat.

The Masters and Grand Masters fleet was mixed together giving everyone the ultimate competition experience. These divisions have the most local riders and definitely the best beach rivalries. The only question was who could follow up their trash talking on the beach with the best performance on the water? The 20-minute final came down to a battle between Dana Miller, Sean Aiken, Ferdinando Loffreda and Brian Caserio. Miller sailed a strong heat, actually finishing in 2nd place giving him the Grand Master’s title over a tie for 2nd between Dwight Bode and James Lundin. Caserio claimed the 3rd position on the Master’s podium sailing an overall strong event. Aiken sailed well for 2nd place but it wasn’t enough to take down Loffreda who was super impressive in the final. Loffreda is definitely in the drivers seat for the overall Master’s title winning both of the AWT’s first two events.

The youth final came down to a match up between Maui’s Casey Rehrer and Fiona Wylde from the Gorge. The wave riding skill of both has improved immensely since they joined the tour just a few years ago. Rehrer took the title sailing a strong heat landing a massive Forward Loop and some slashy wave rides. 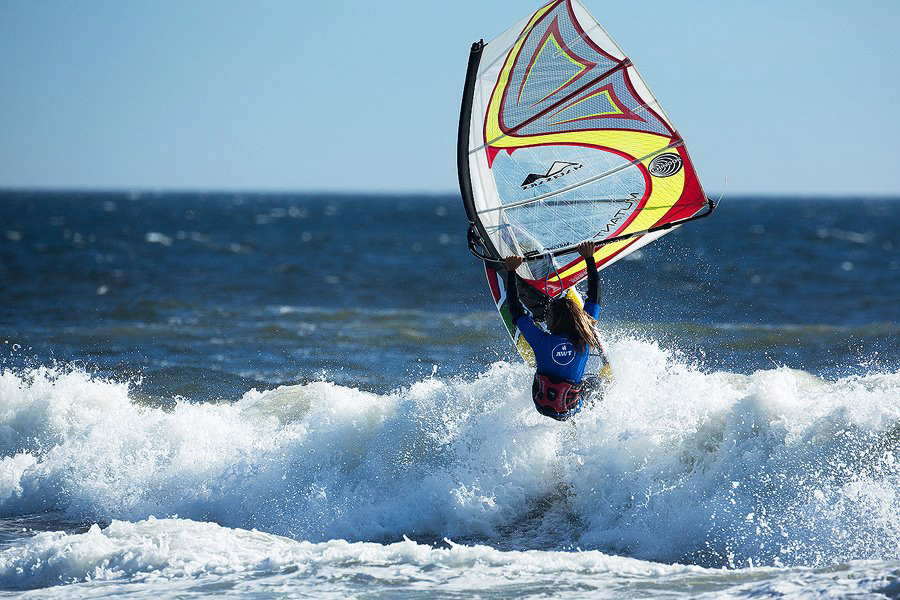 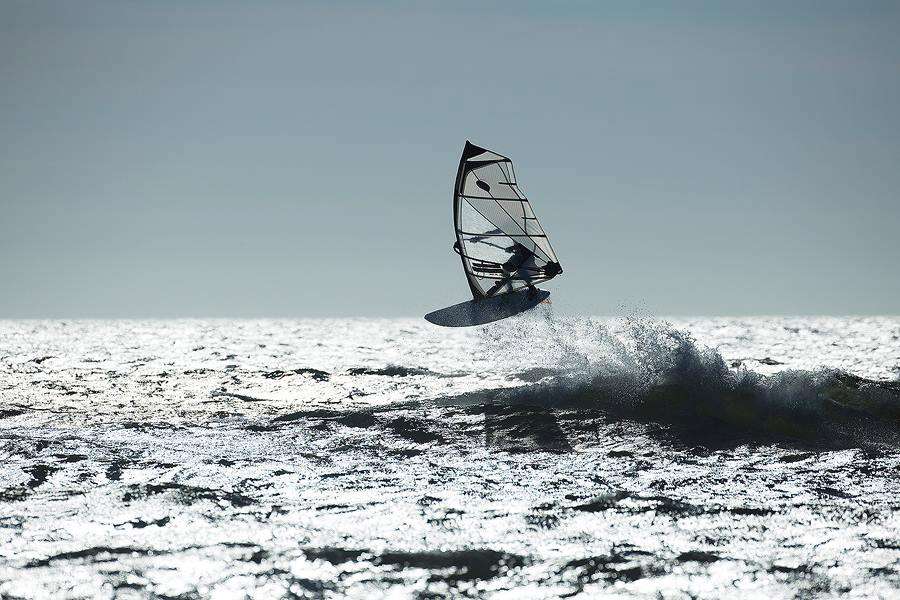 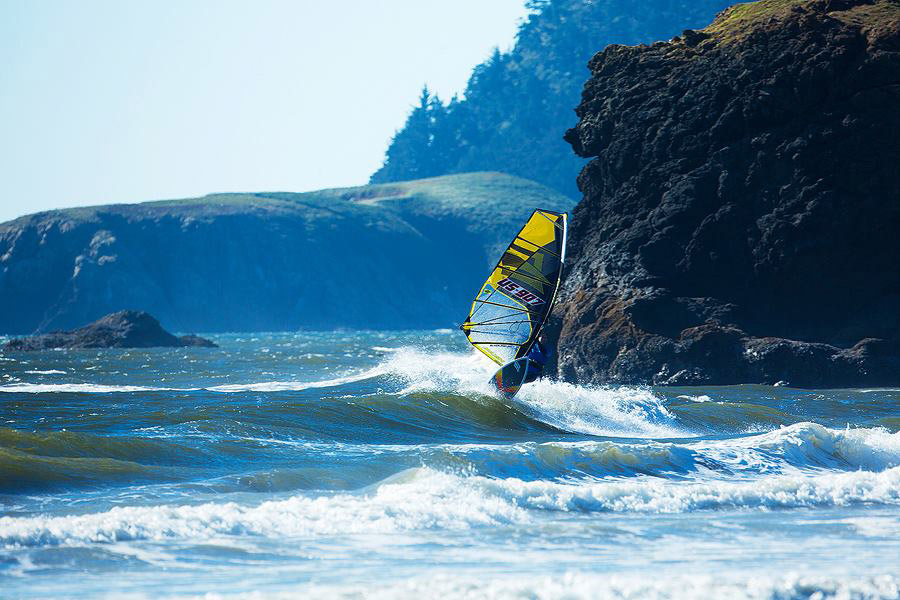 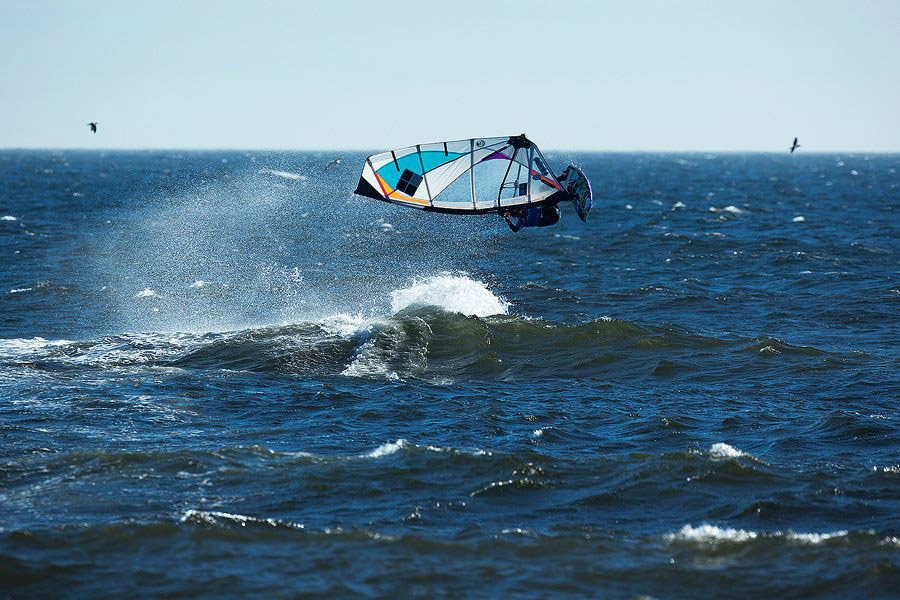 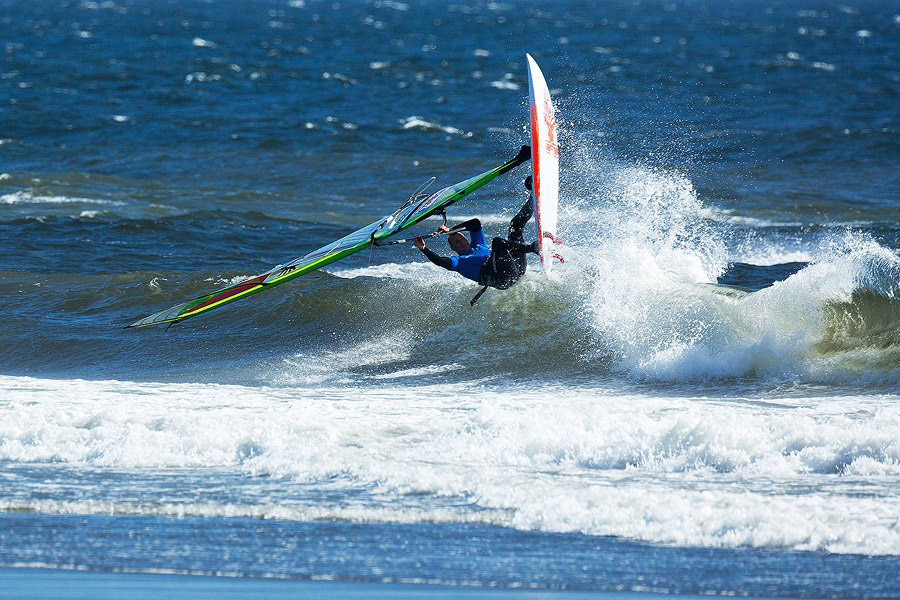 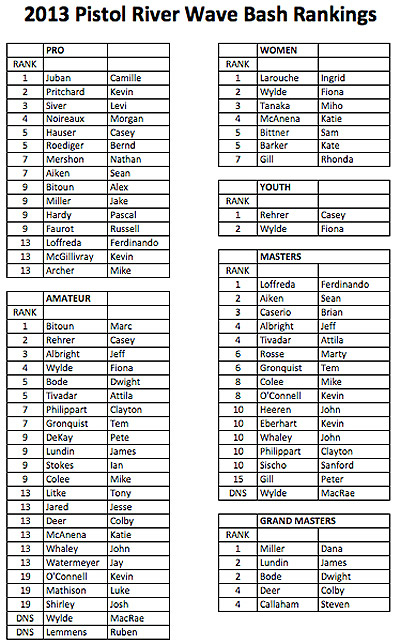