So once again Punta San Carlos delivered the conditions and all the heats and finals were completed by sundown on Thursday.
All the competitors were still around so the organisers decided to run a fun Pro-Am event, with a $500 cash prize.

Names were drawn from the camp’s sombrero to pair up each amateur competitor with a professional rider.
The contest was run at the beach break in front of the Solosports camp.
The rules were simple, 3 teams per 18 minute heat, each Pro-Am team has to ride one wave to impress the judges, but they must both be on the same wave to score. 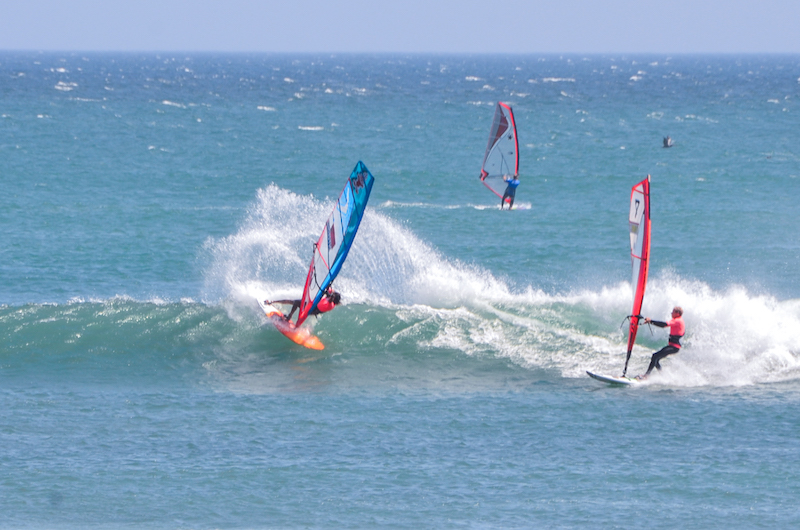 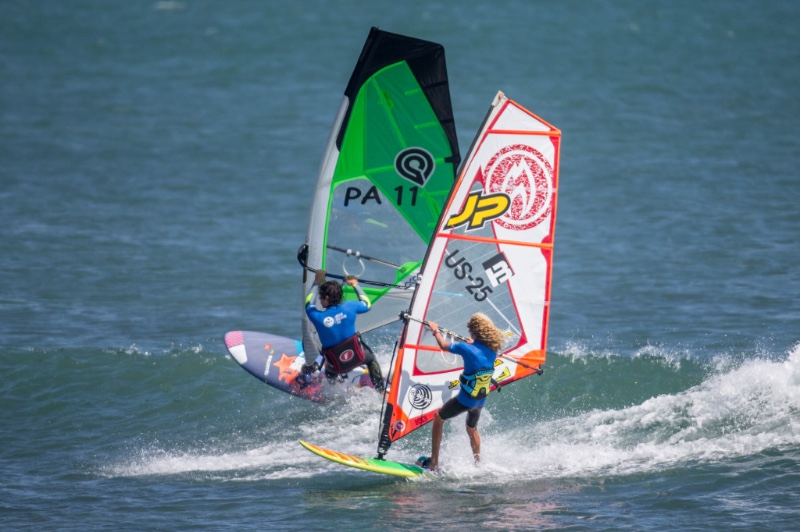 Heat 2
Z Schettewi sailed with KMac (modelling his new contest hairdo), they were waiting to catch a nice long wave when Ingrid Larouche and JP sailed out past them to steal the wave with synchronised late tacks on the face. Contentious!
Meanwhile Alex McKirgan and Casey Hauser seemed to get quickly tuned in to a natural double act and claimed their place in the final. 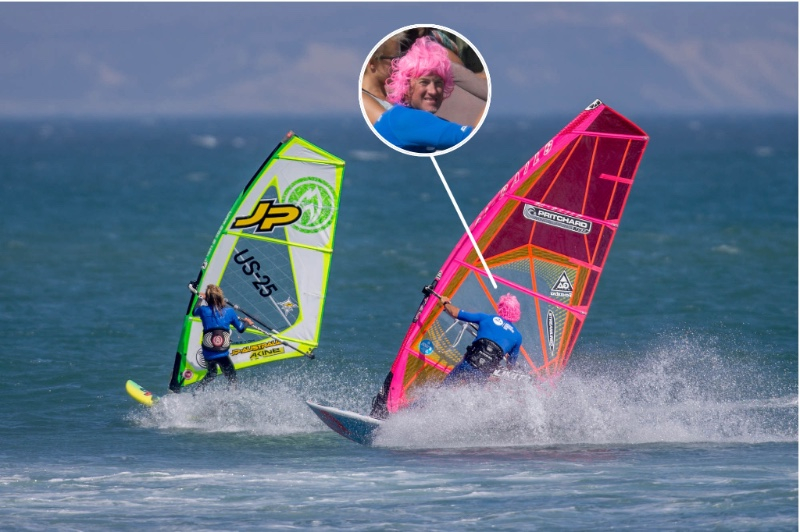 Heat 3
Masters sailor Carl Speiss sailed the heat of his life with his team-mate Kevin Pritchard. They pulled perfectly synched turns then sailed so close down the wave that KP was able to have one foot on each board whilst waving at the judges under the palapa. Sarah Hauser and Colby Deer caught a good one while Joey Sanchez made the surprising move of switching to a kite mid heat and sitting on the front of team-mate Max Shettewi’s board on the wave. 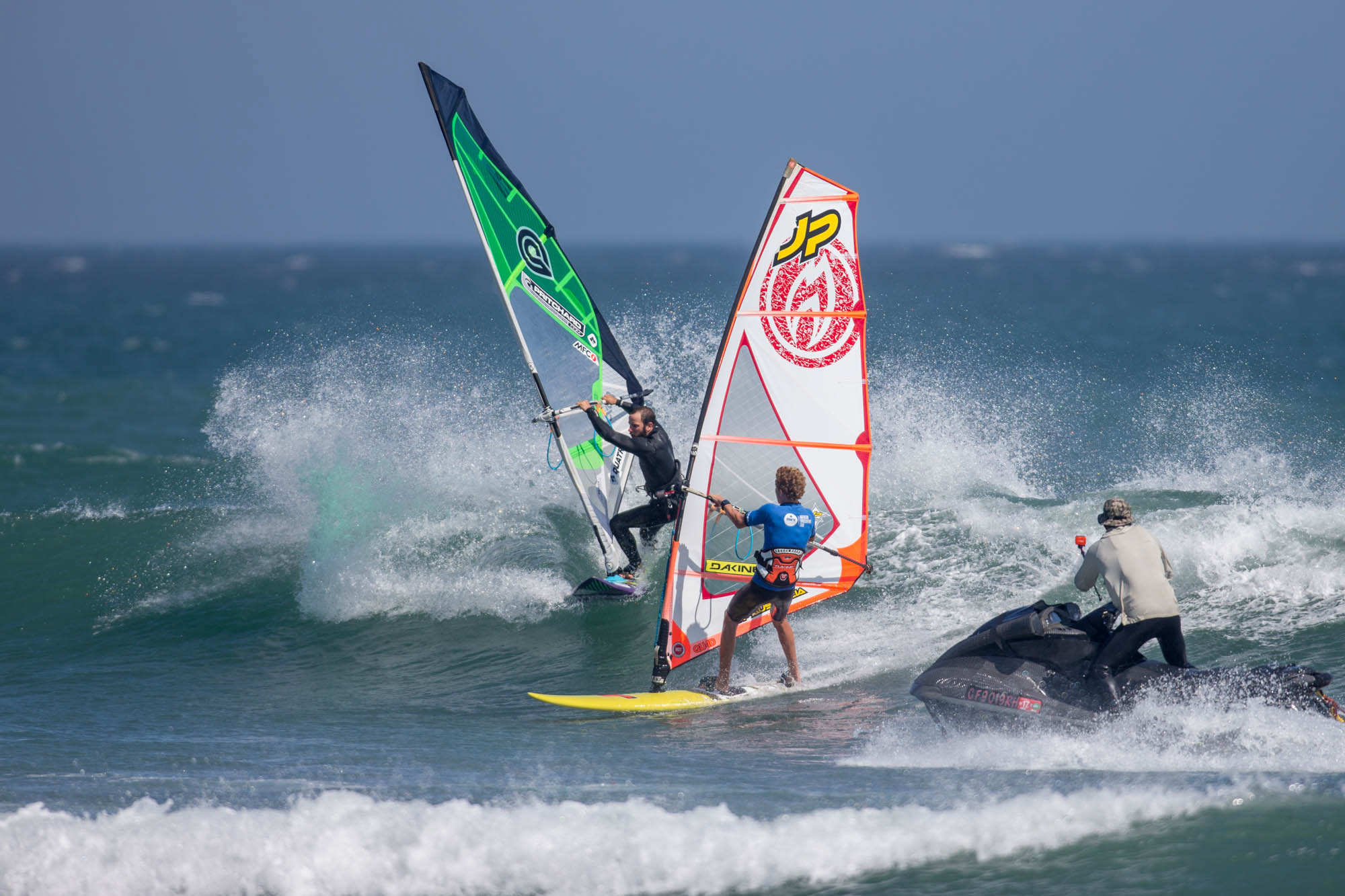 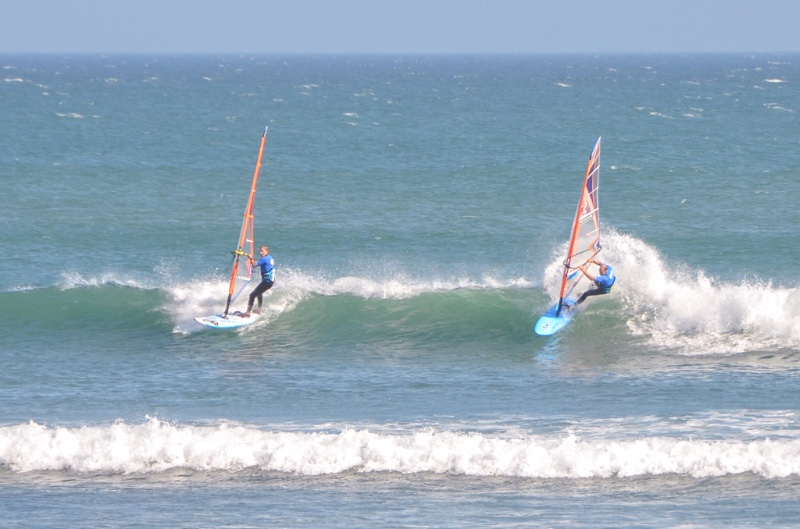 The Pro-Am Grand Final
All three teams were cleaned up by a sneaker set which had the fleet swimming through the first half of the heat. Taka and Robert’s teamwork was improving, the Carl and KP show reached new heights with an aerial duet, but it was the long stylish rides of team Hauser-McKirgan that won the day. Their tactic seemed to be that Alex would sail way out the back to find them a wave while Casey hung around on the inside, ready to jump on it if it looked worthy. It paid off with a unanimous decision from the Judges. 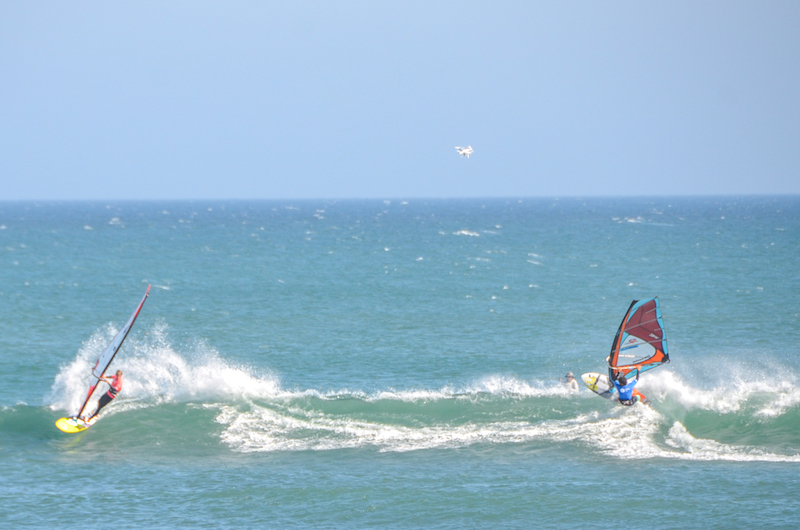 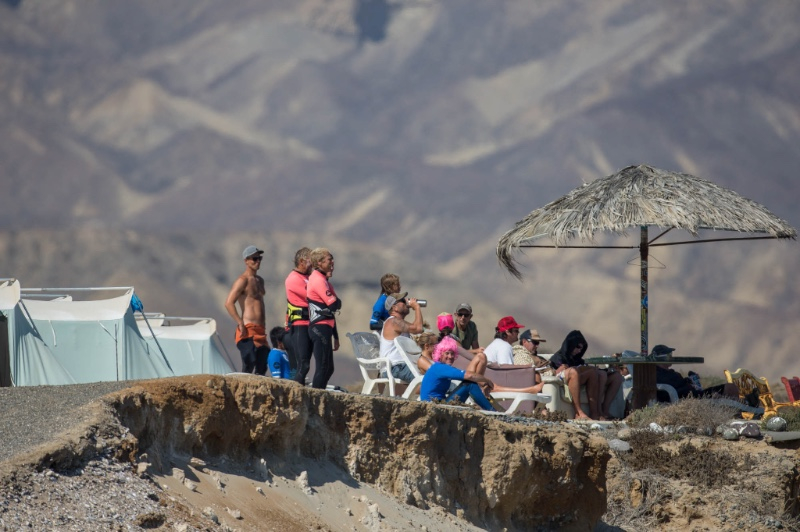 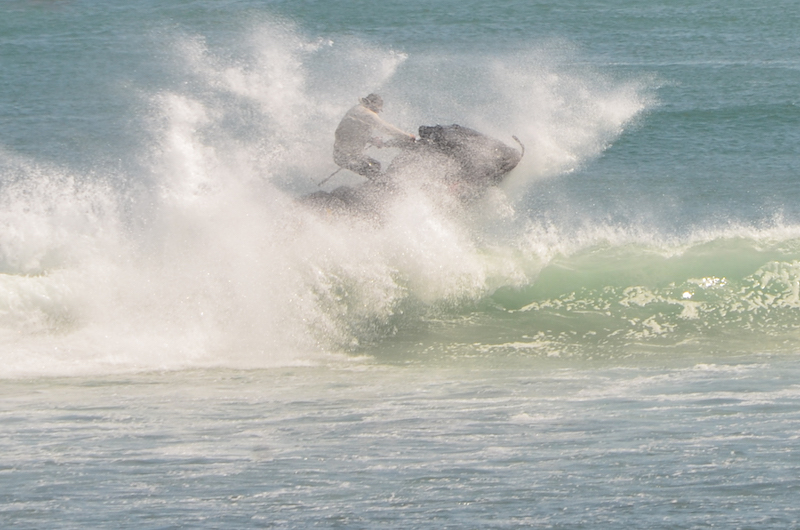 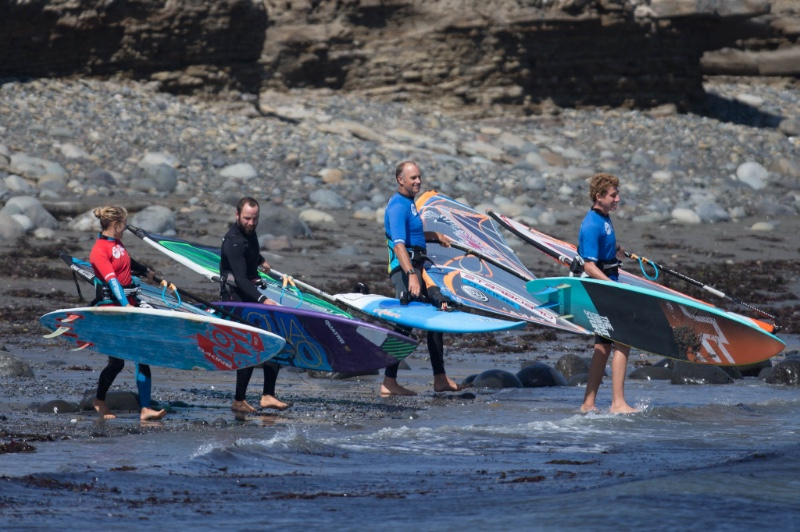 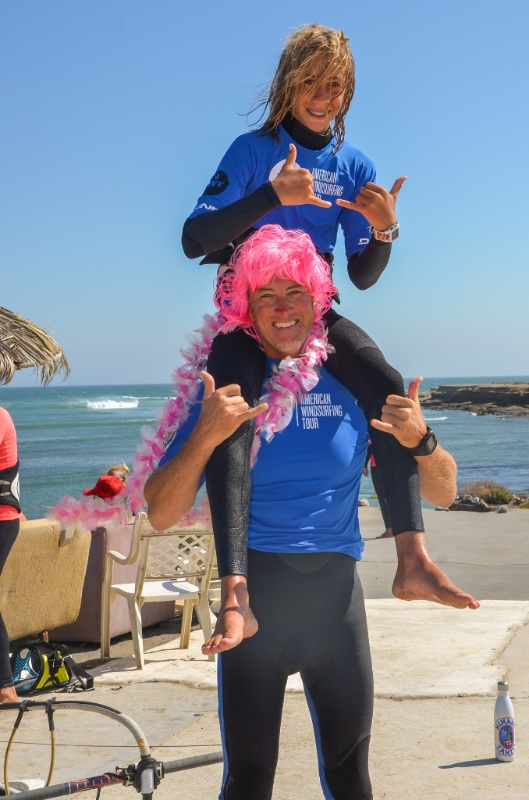 The Prizegiving.
Starting with the DaKine prize lottery from our generous sponsors, where everyone went away with new Dakine goodies. Followed by the premiere of KP’s movie of the event. An awe-inspiring edit with camera-work from Kevin’s tripod, Joey’s drone and Bennet’s wave runner. High performance wave-riding shot from breathtaking new angles.
Then all assembled at the Solosports bar for the announcement of the winners, presentation of trophies, celebratory Baja Fogs, Mexican fireworks and reflections on the event around a roaring fire on the cliff top.
A special night for the winners, Boujmaa, Sarah, Jake and particularly Jeff Allbright who won not only his age-group division of Masters but also the Amateur title, noting that his age happens to be the same as the combined ages of the talented finalists who came 2nd, 3rd and 4th! 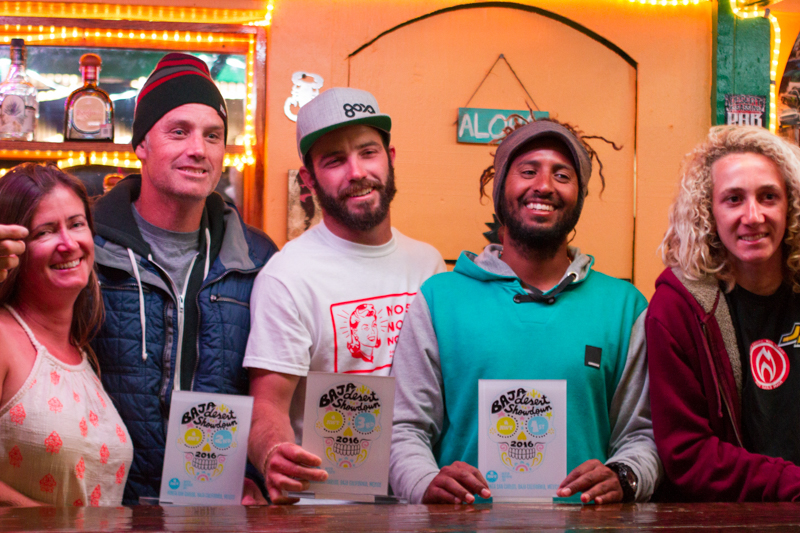 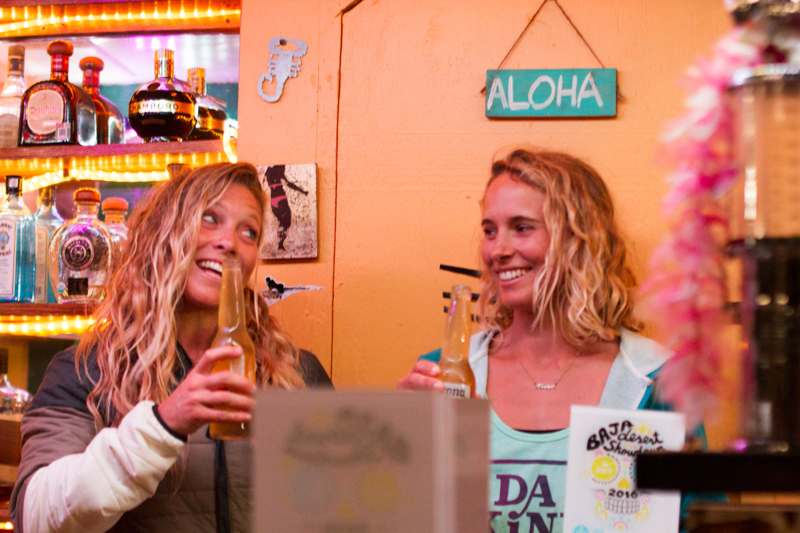 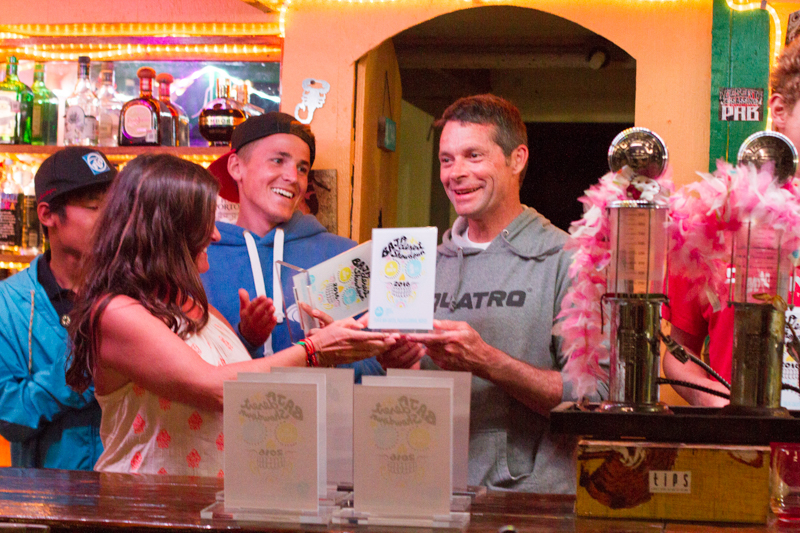 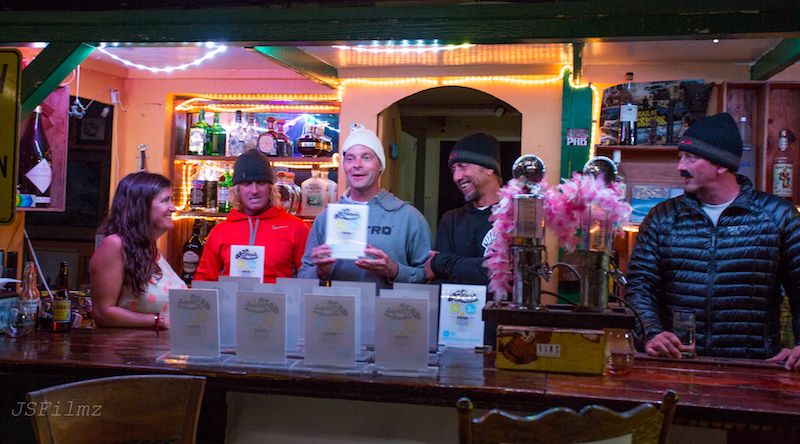 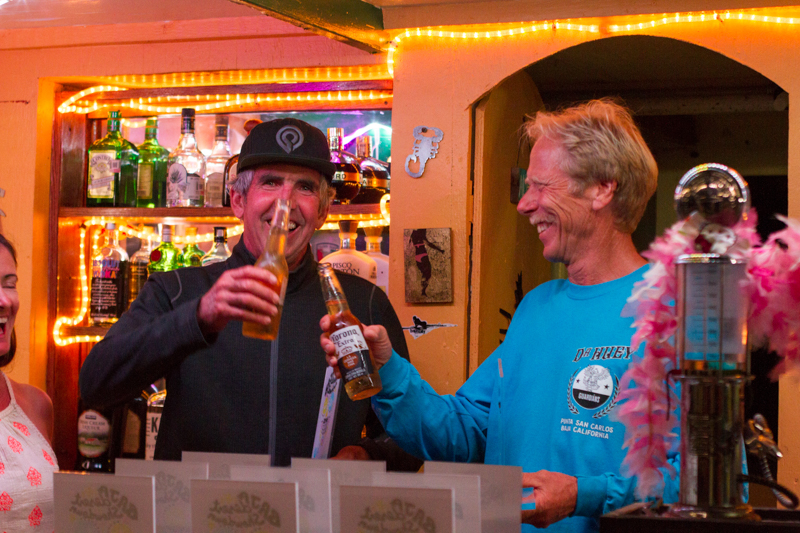 Many thanks to Kevin Trejo and his team at Solosports for all their help to put this event on. Great hosts.
Also thanks to Bennet and Blakeney who provided safety support from their wave runner and shot amazing footage from the water.
To the judges for keeping score and getting us the results – a tough job.
And finally to Event Director Dawn Pooley who kept the show rolling smoothly all week.
See you all next year!