Day 5 started out similarly to the previous days, but with a little more urgency. The contest window was rapidly coming to a close, and we still had a lot to do. Fortunately the wind was up, and there were still some waves at the beach. The call was made to go straight into the Amateur Division, and run through the bracket. Also, the Masters, Grand Masters, and Women would get their shot. It was looking doubtful to run any Pro heats, as the waves were just not quite big enough, but the Pros remained on hold just in case any conditions popped up. There are many spots along Hatteras Island, and we knew that the potential was there that we could find some action for the Pros. 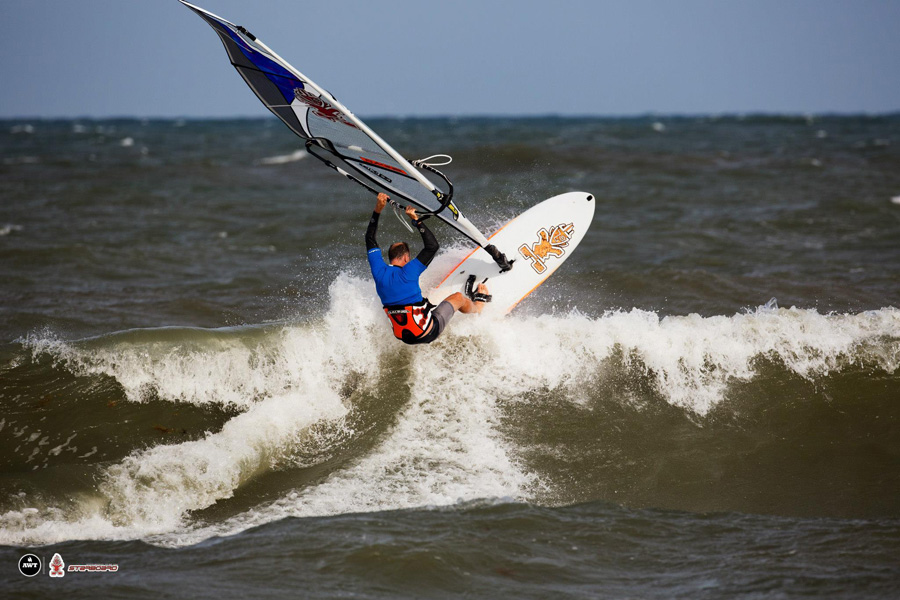 The wind continued to build through the day, providing plenty of action for our competitors. As the day progressed, and the heats kept ticking away, it was looking more and more like we would be able to complete the many divisions in this Starboard Hatteras Wave Jam. 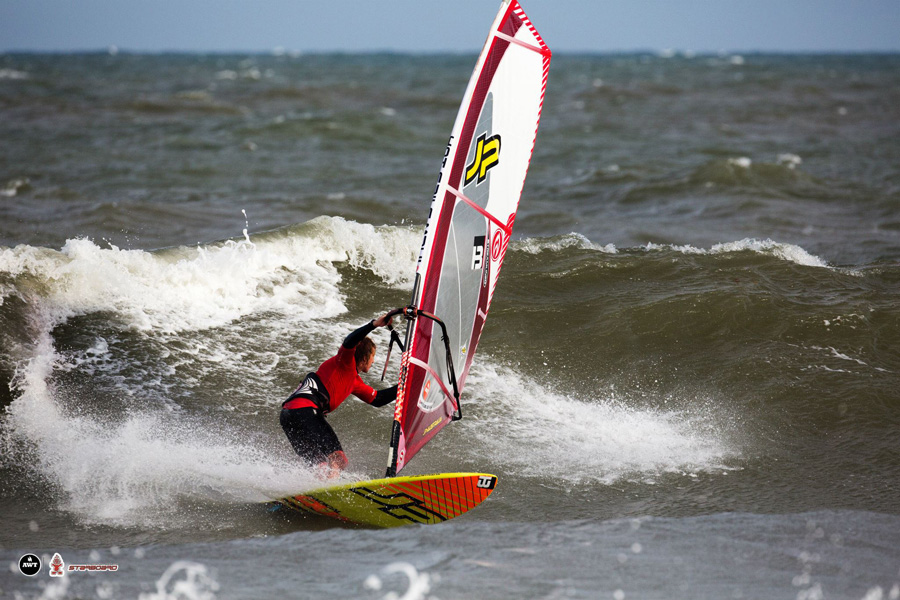 The largest of our divisions was the Amateur fleet. We saw many great heats, and some very quality riding. Standouts included tour newcomers, and regulars alike. The Amateur finalists were Jack Holliday (his first AWT event), Ian Stokes, Casey Treichler, and Ruben Lemmens. All had sailed well to reach the final. Ian and Casey appeared to have the lineup dialed in, trading many waves with some big turns and aerials. Ruben and Jack did not find as many waves, but still managed to put up some good scores.  Ruben just edged Jack out for third place. The battle for the top two spots was intense. Casey had the big powerful turns throwing buckets of spray, while Ian chose length of ride with a few more aerials mixed in. The heat was very close right up to the end, when Ian picked one of the best set waves of the day. It had a nice wall to it, which he used to perfection, maintaining speed and flow throughout. He started with an aerial right off the peak, then mixed in a couple good setup turns, and threw down one more aerial to complete the ride. The wave, scoring in the excellent range, sealed Ian’s win in a hard fought battle. 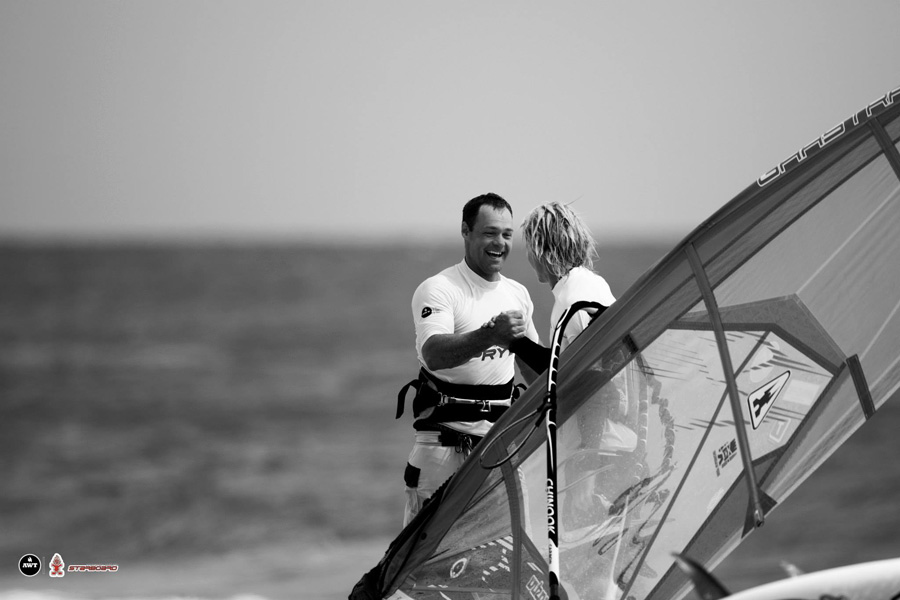 Toward the end of the day, we sent a scout to check some other spots to see if we might be able to squeeze in the Pro fleet at another location. Surprisingly enough, the strong winds had kicked up a really good wind swell just up the coast near the lighthouse. The call was made that there would be a quick warm-up session for the riders to tune in to the conditions, and we would start the heats right away.

This year’s Pro fleet was rather small, so we knew that we could finish if we found a small window of prime conditions. Consisting of just 6 riders, we were able to run two 3-man heats with the top two riders advancing in a Single-Elimination format. The first heat was a battle between tour regulars, Morgan Noireaux and Russ Faurot, and the local hero Andy McKinney. Morgan proved to be the strongest of the three, and it was a seesaw battle between Russ and Andy for the second spot in the Final. Russ just edged Andy to take his spot in the Final with Morgan. The next heat would include 8-time World Champion Kevin Pritchard, Ferdinando Loffreda, and Keith McCulloch. Again, it was a battle between the tour regulars, and the local standout. Kevin sailed very well taking the lead in the heat early. Ferdinando and Keith battled it out for the second spot with both scoring some good rides. Ferdinando was able to edge out Keith to set up the epic final. 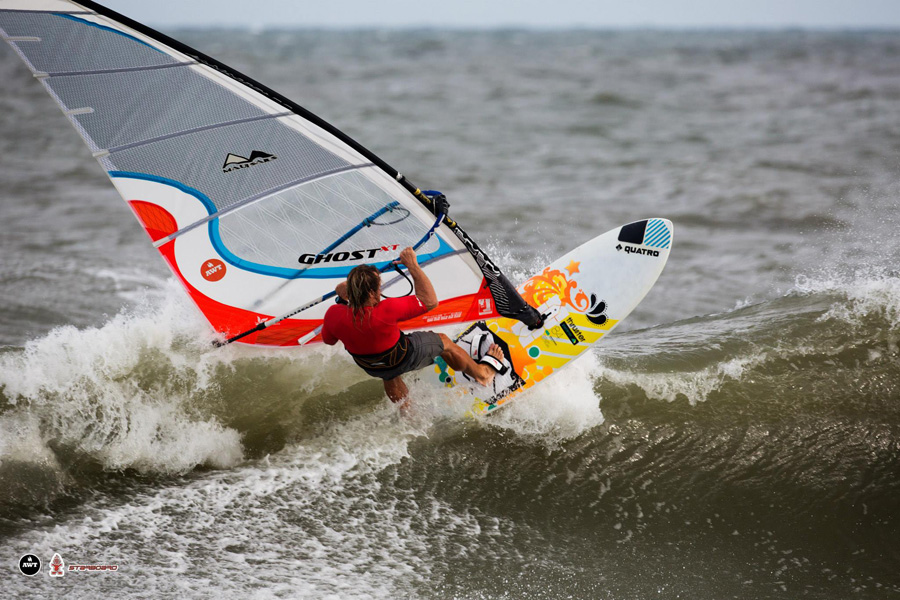 Kevin and Morgan asserted their dominance early, racking up some high scores right away, and showing that they would likely be taking the top two spots. The battle for third and fourth between Russ and Ferdinando was a tight one, with Russ picking some of the biggest waves, and Ferdinado carving some really nice sections. Ferdinando was able to beat Russ for the third spot on the podium when he put together a nice runner of a wave with a clean aerial. Kevin Pritchard showed why he has been crowned World Champion multiple times, always selecting the best waves and ripping them to pieces. He was able to link multiple backside turns, with clean down the line wraps, and critical hits right in the pocket time after time. It was a clinic in how to ride Side-onshore waves with throwing peaks. Morgan was also very good, showing his surf-style on each of his waves linking some of the best turns of the day. In the end, he just couldn’t quite match Kevin’s ability in the tricky wave conditions. 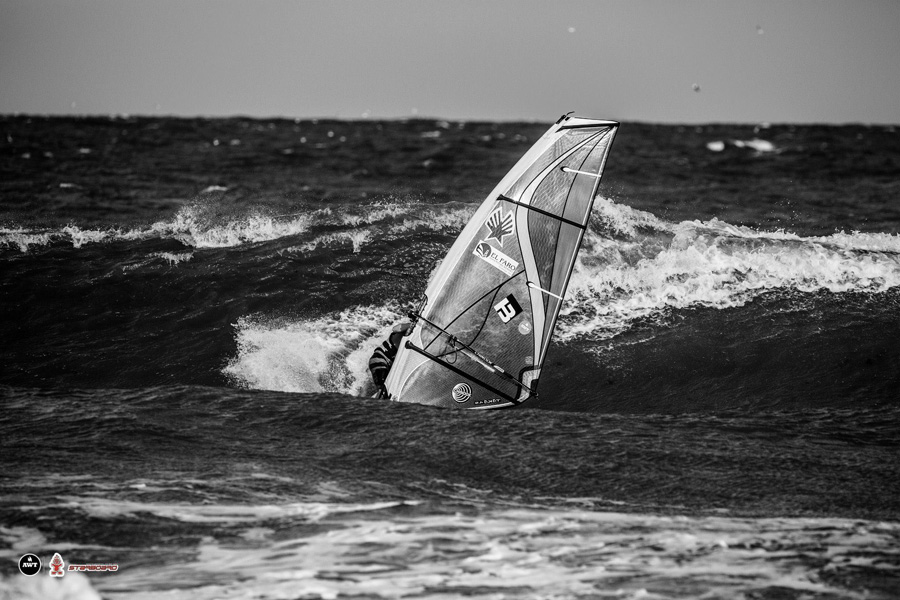 Wrapping up the event with all divisions complete, capped another epic week of AWT competition. We would like to say a huge thank you to all of our sponsors (too many to list here), including Starboard for being the Title contributor, Wind-NC for putting up the winner-take-all $2500 dollar prize money, and Outer Beaches Realty for providing an amazing place for us to stay. 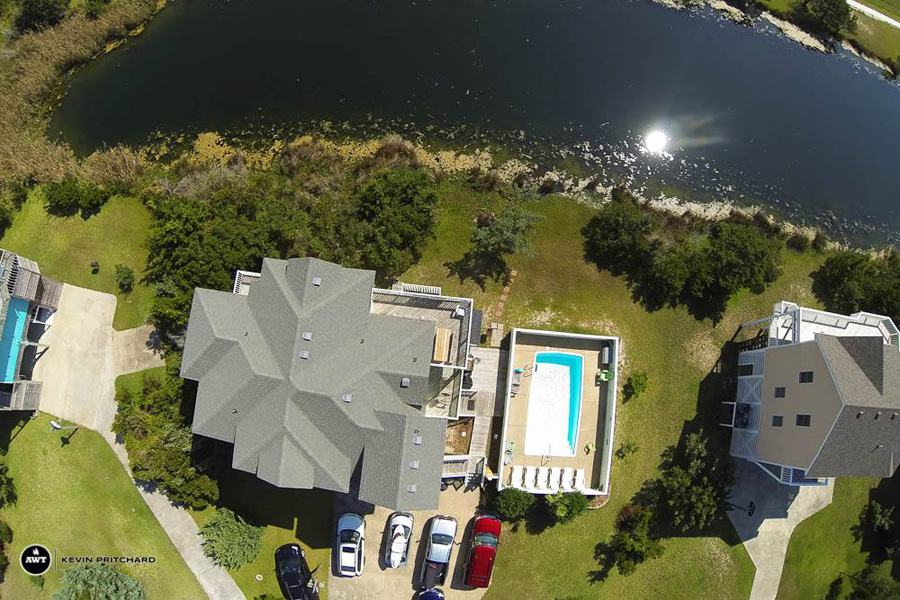 “The successful completion of the Hatteras Wave Jam signals the end of a two month period on the road and what an experience it has been! With events in Peru, Mexico & North Carolina the global reach of the AWT is growing event by event and being a part of this family is the most rewarding thing, which I have been involved in for many years. As we begin to look forward to the 2014 finale at the Aloha Classic the Pro bracket is wide open with three riders, Levi, Kevin and Morgan all able to claim the top spot left vacant by 2 time winner Camille Juban (who missed most of the Tour through injury). The home of windsurfing will provide the perfect stadium for the eventual crowing of our champion this year. Every event has it’s challenges and the Hatteras Wave Jam was no different but it is a testament to the staff, volunteers and riders who remained mobile and motivated to ensure that all heats were completed across all divisions. The Outer Banks are a special place, for a period it was my home spot while working in North Carolina and I love coming back, as with each stop on our tour there is more to the event than the on water action and Hatteras provided us with an amazing holiday as well as an amazing competition. The team is now headed back to Maui refreshed and ready for the start of the autumn wave season. Looking ahead to 2015, ask yourself which event(s) you would like to go to and then make it happen!” Chris Freeman, AWT Head Judge 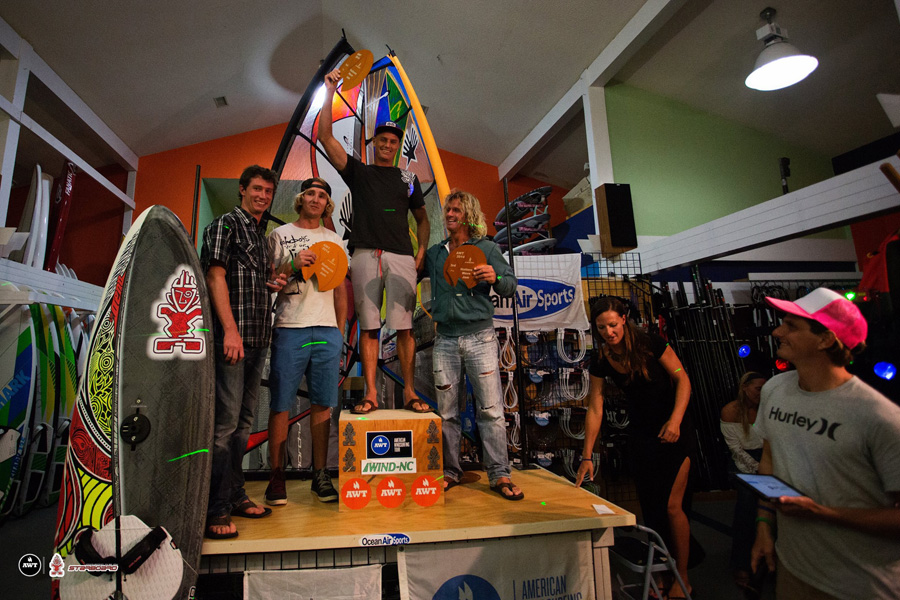 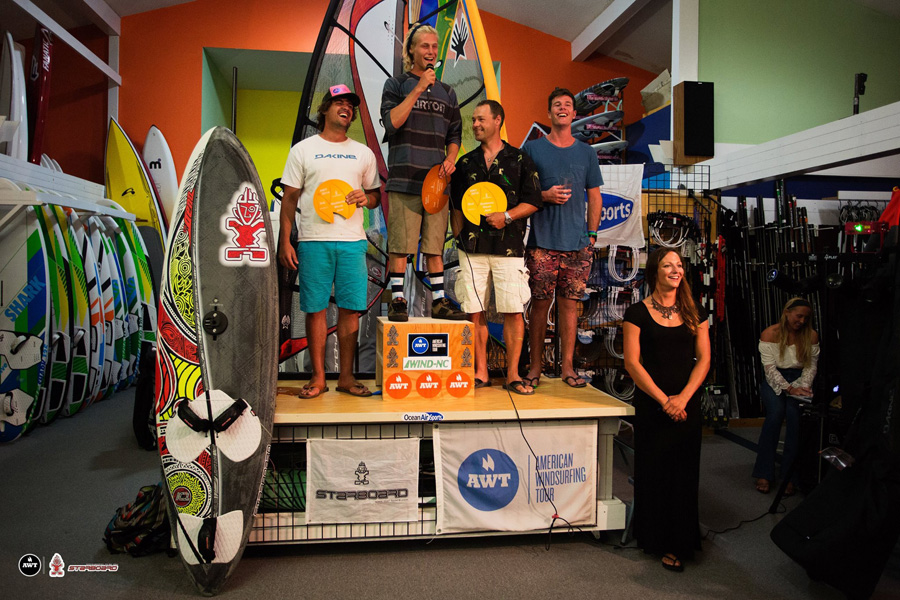 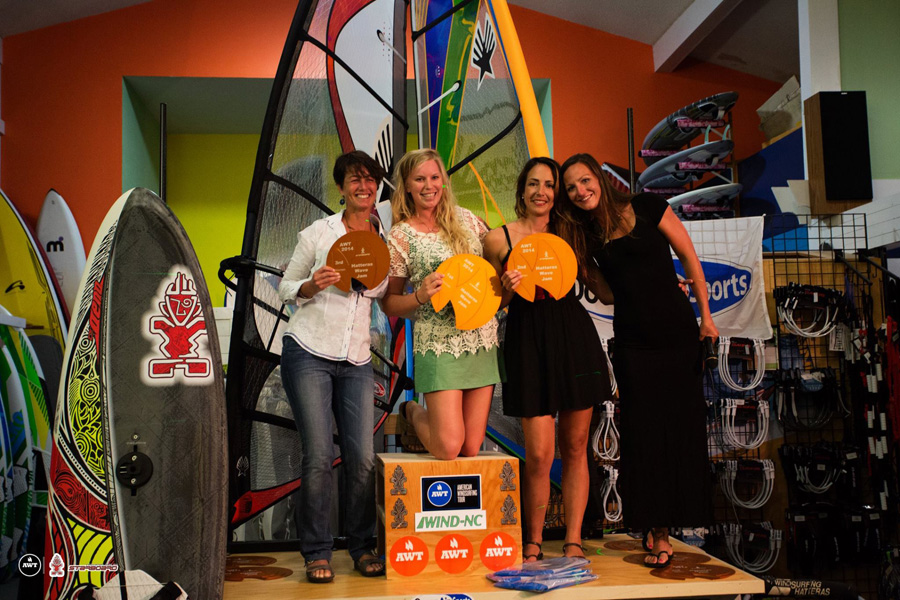 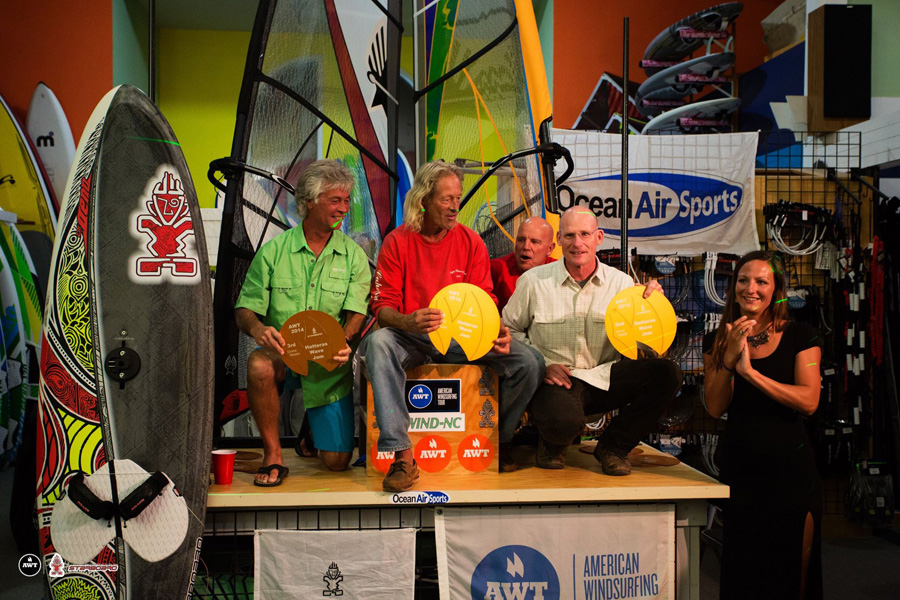 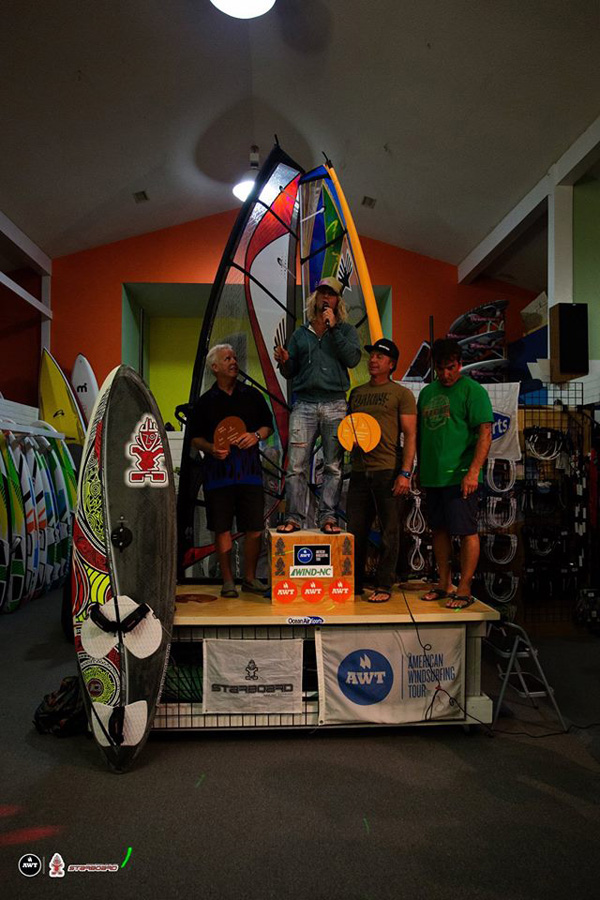 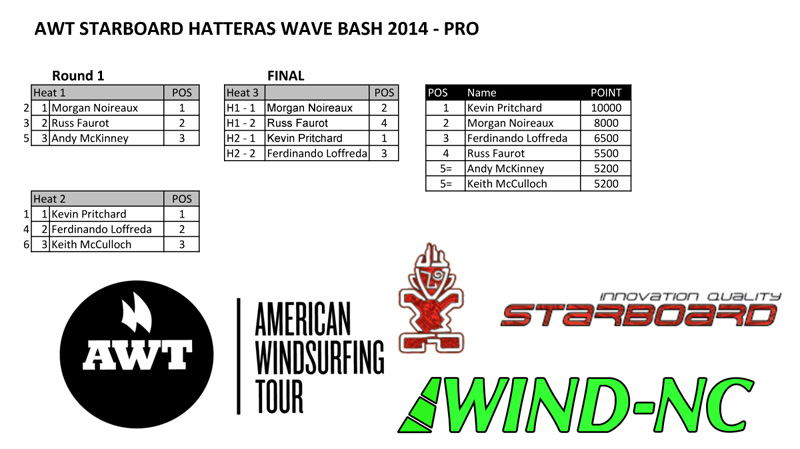 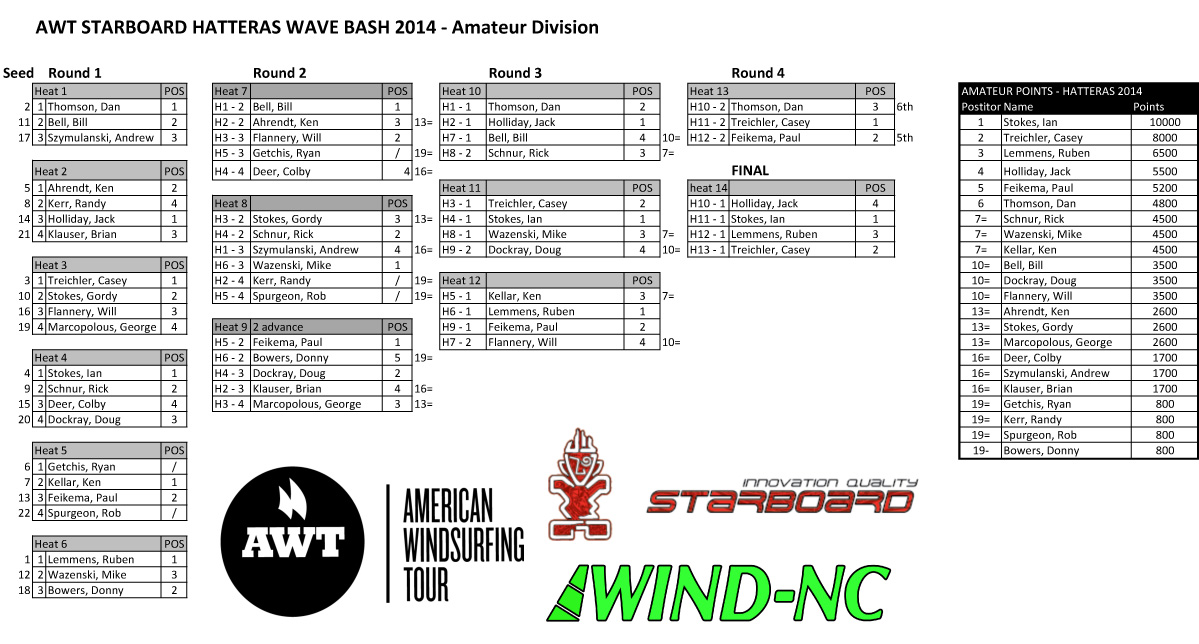 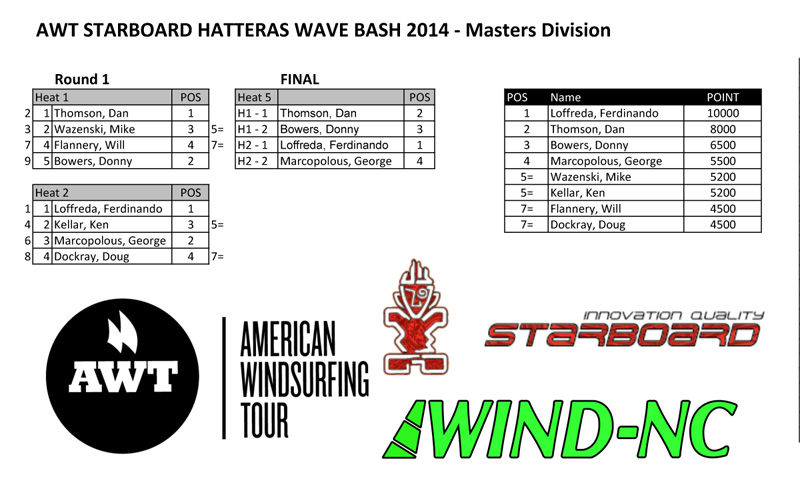 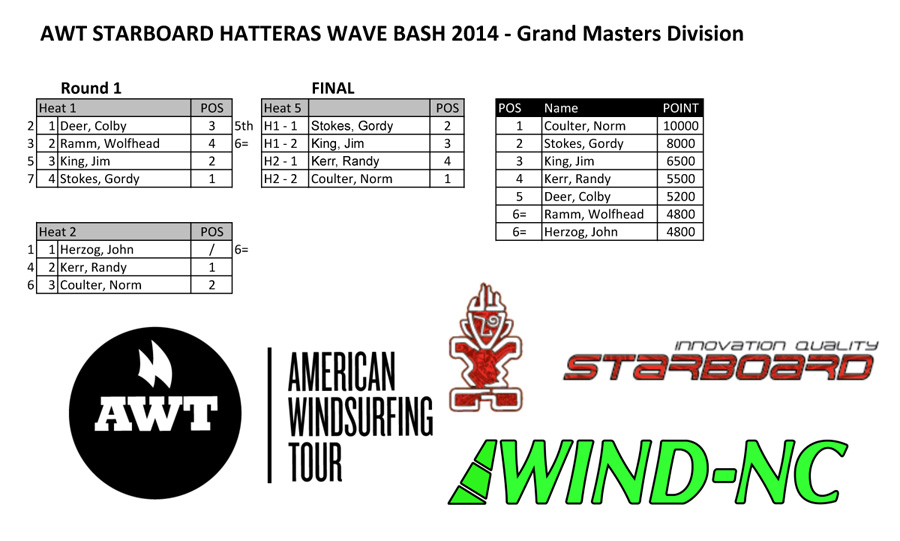