Riders awoke to an increase in the swell and clear skies, suggesting that the day would be the best yet. 11:00 rolled around and it was time to go. Conditions were pumping with logo high sets rolling through the bay. The best waves were connecting from the top of the point all the way through the hotel, at least 2-3km long. Sailors were counting the minutes that they were riding waves rather than the number of bottom turns. 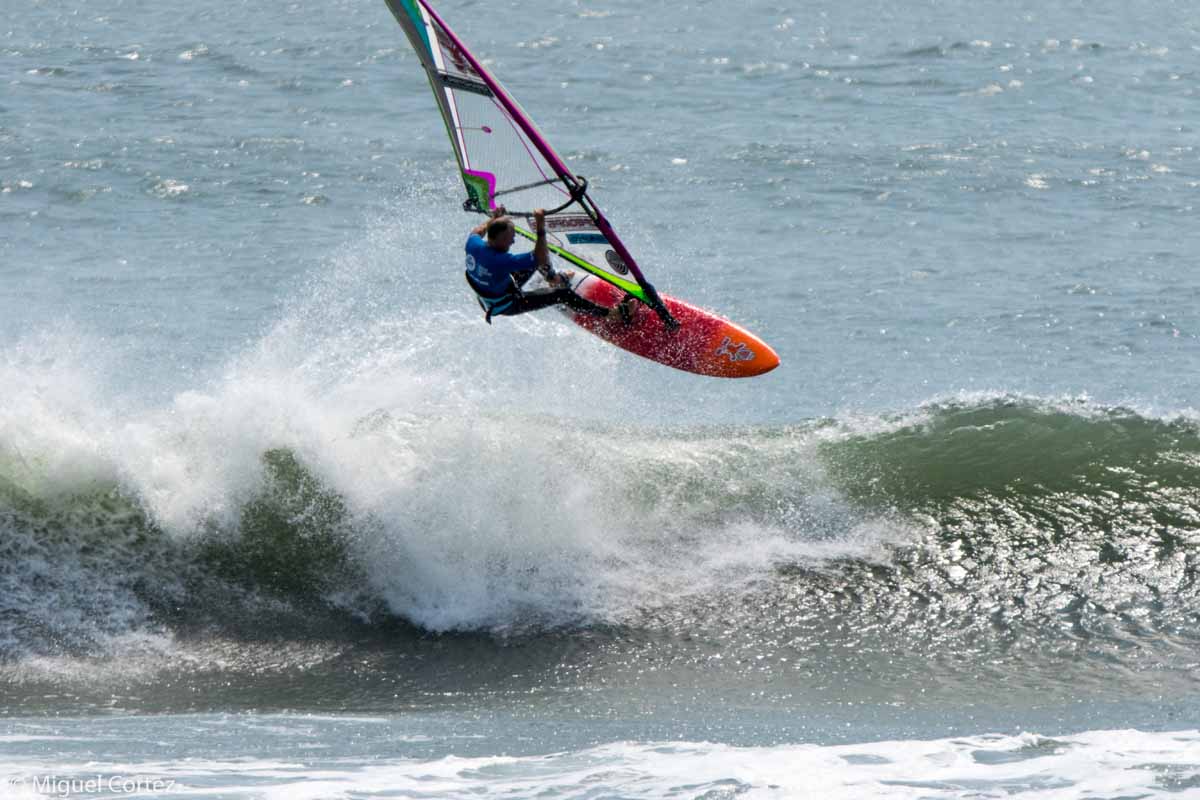 The warm-up session was short, due to the fact that we didn’t want to miss any available time to run the contest. The schedule for the day included Amateurs and Pros, so as to allow all riders the best possible conditions. 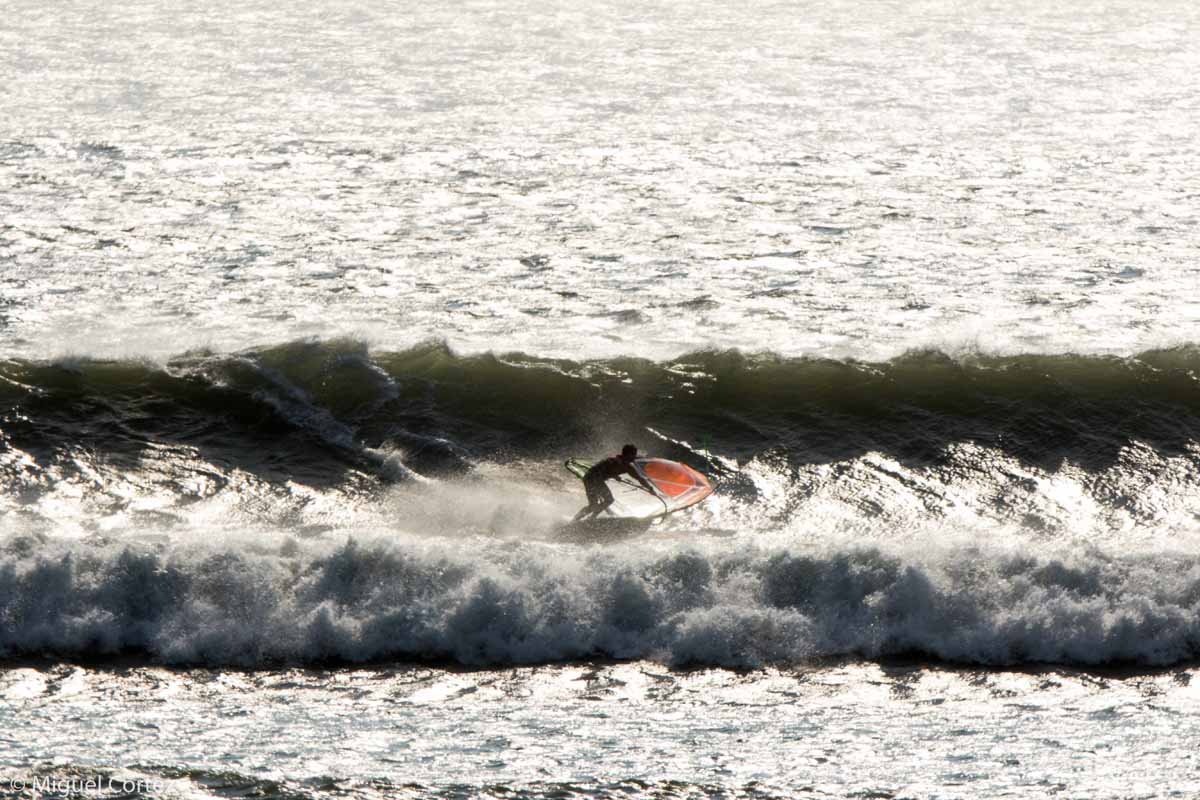 The original plan was to take the winner of the Amateur heats, and plug him/her into the Pro division. But, with conditions being so good, the call was made to get the Pros going right away. In order to fill the 1 remaining spot in the Pro division we decided that the person with the highest heat score in Amateur Round 3 would be placed into the Pro Bracket. Round 3 was a no loser heat, so the riders had extra incentive to push hard without fear that they would be knocked out. It was a close battle with top 3 being James, Maxime, and Tom in that order. James took the win and secured his spot in the Pro bracket with a 2 wave heat score of 16.83. 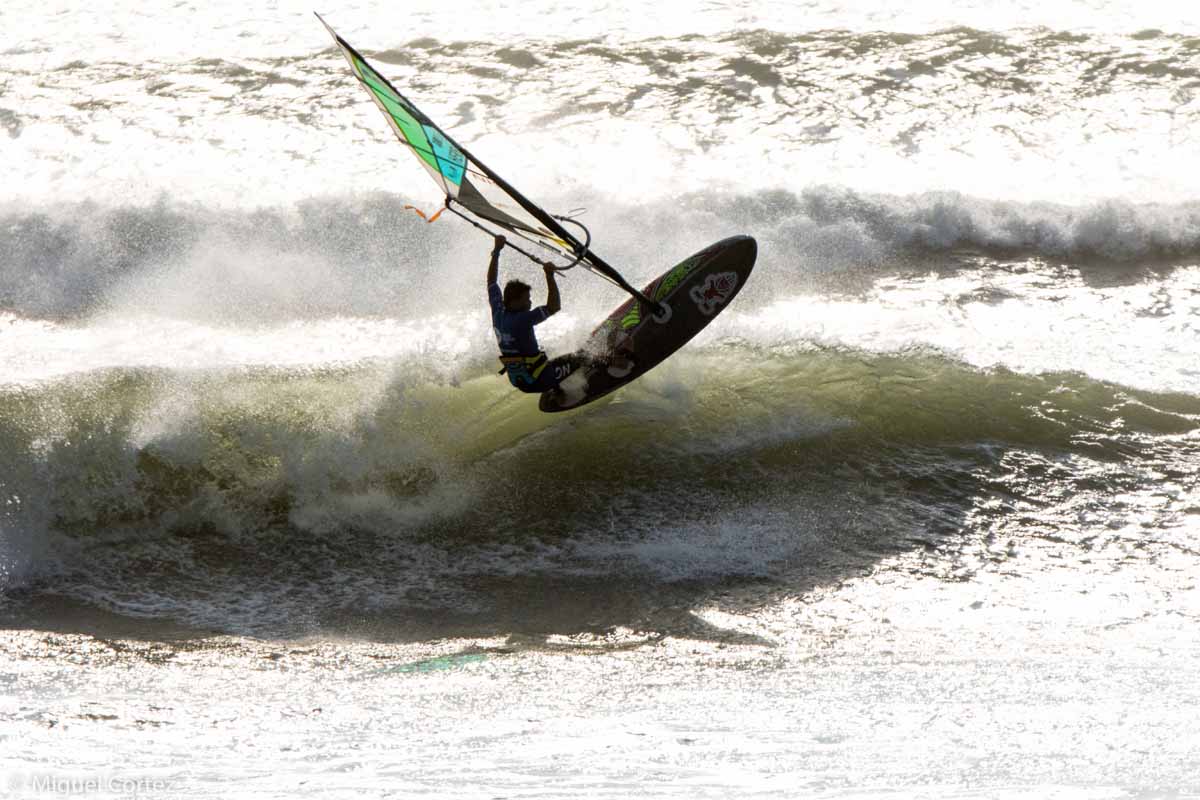 With Round 3 of the Amateur Division complete, it was on to the Pros where all heats were stacked. The Pro fleet was going to be a difficult one to find separation, with everyone ripping on the unbelievably long point waves. In the first round we saw one major upset as top seeded Boujmaa Guillol found it difficult to connect the right waves, finishing in 4th place. Being that the first round is a non-elimination round, he would get another chance to advance. However, the other riders relegated to Round 2 would prove to be just as determined, and it was the end for Boujmaa, placing 2nd in the critical elimination round where only 1 of the 3 riders advanced. 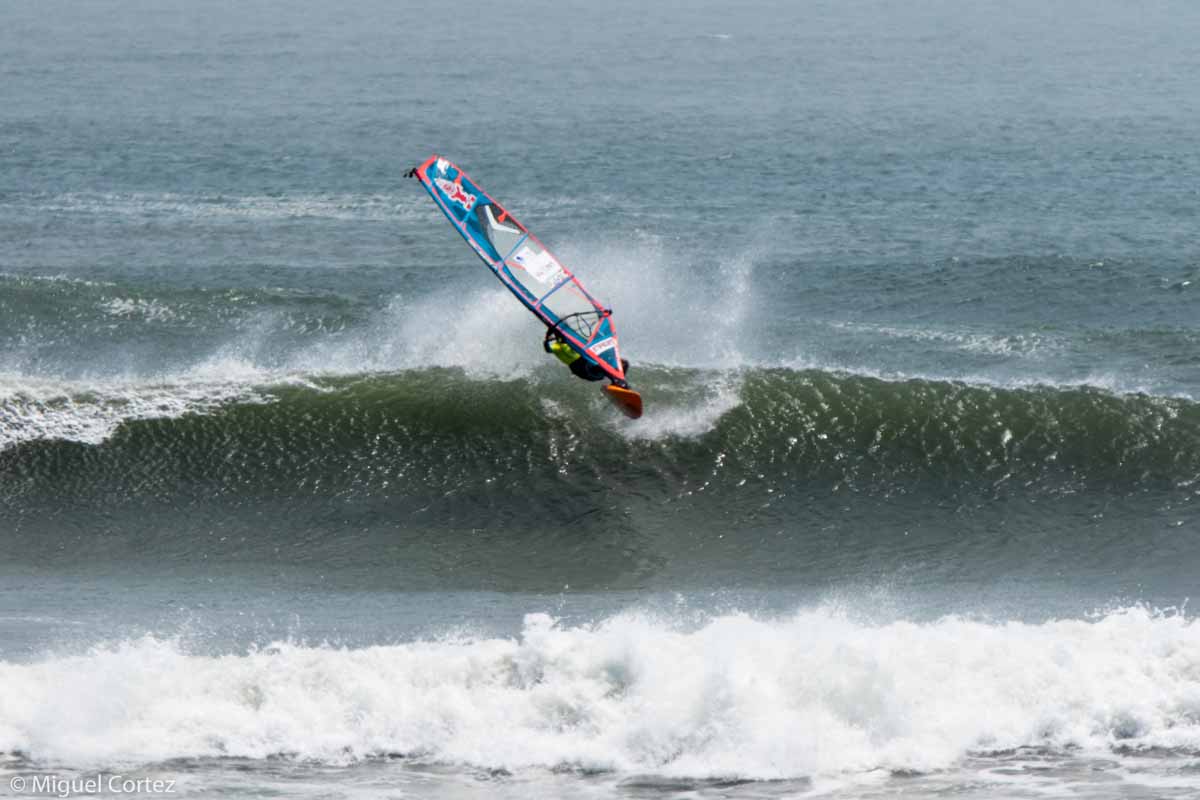 Throughout the rest of the day Amateur heats would be mixed between the Pro heats to give all riders enough time to prepare for their upcoming heats. There were many standouts through the day in the Amateur rounds. The final 4 came down to Alessio Botteri and Nicolas Schreier from Peru, Tom Soltysiak from Canada, and James Broomhead from Australia. The heat was very close with all riders scoring set waves from the point down to the Hotel. James earned a bit of separation when he dropped into a nice set making turn after turn, and finishing with a clean aerial right in front of the judges. Alessio came 2nd, Tom 3rd, and Nicolas 4th to complete the Amateur division. It was an impressive show, with moves rivaling some of the Pros. 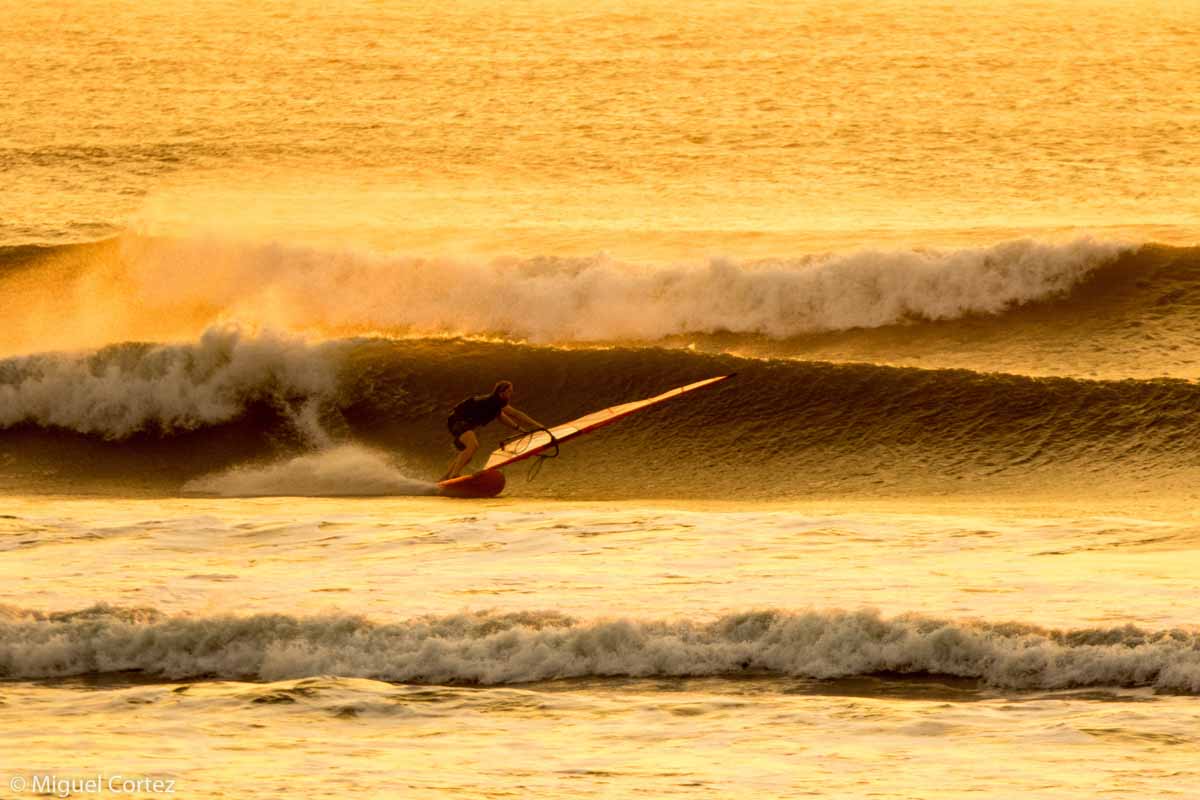 Round 3 of the Pro Division saw the action intensify with big scores and big moves being dropped by all. The firs heat saw Camille Juban take the win with a 2-wave score of 17.6, the highest of the day so far. The margin was narrow however, with all riders coming within 2.46 of the lead. Kevin Pritchard took 2nd, Morgan Noireuax 3rd, and Gonzalo De La Brena finished in 4th. The next heat was mostly an Aussie affair with 3 out of the 4 riders coming from Australia. Ben Severne took the win over Forrest Ladkin, George Westra, and Naldi Sagripanti. 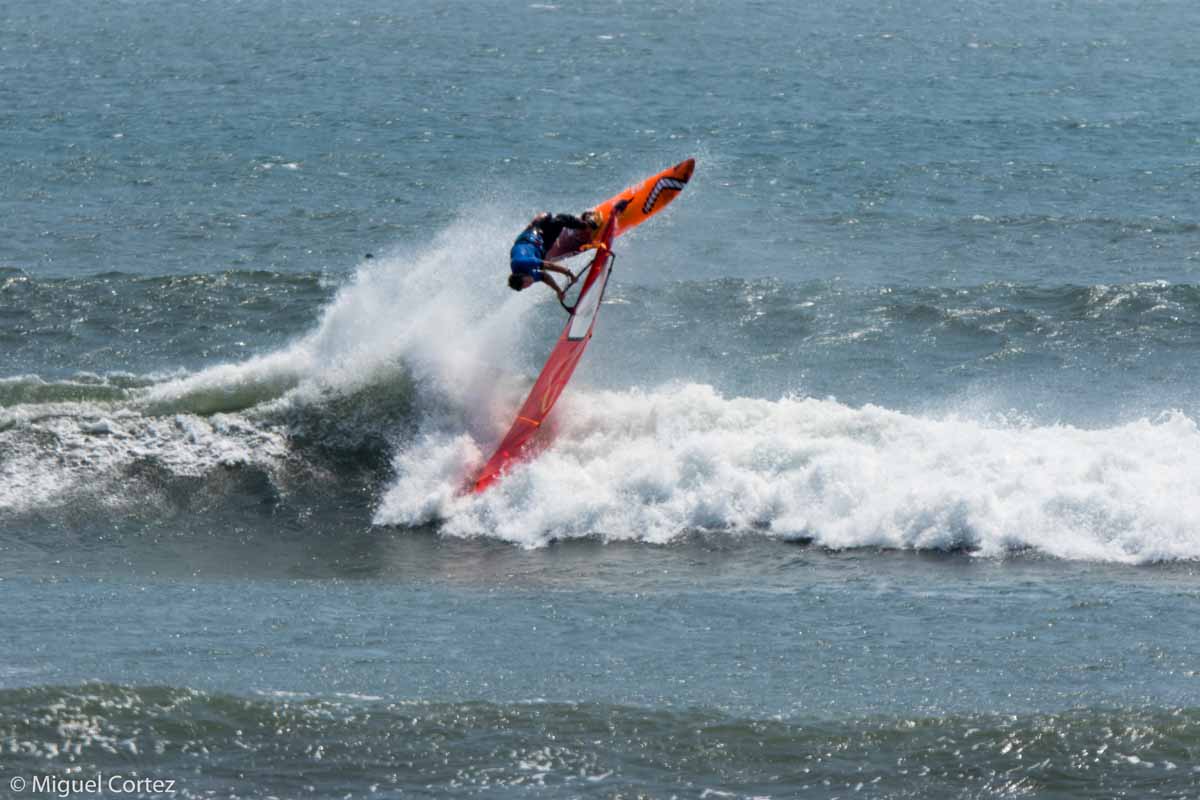 This set up the second of the elimination rounds and would decide the semifinals. In the first heat Kevin Pritchard was able to advance past George Westra, who unfortunately suffered an injury to his Achilles tendon. We wish him a speedy recovery, and hope to see him back and healthy soon. The next heat saw Morgan Noireuax advancing past Forrest which set up the final spot in the semis. 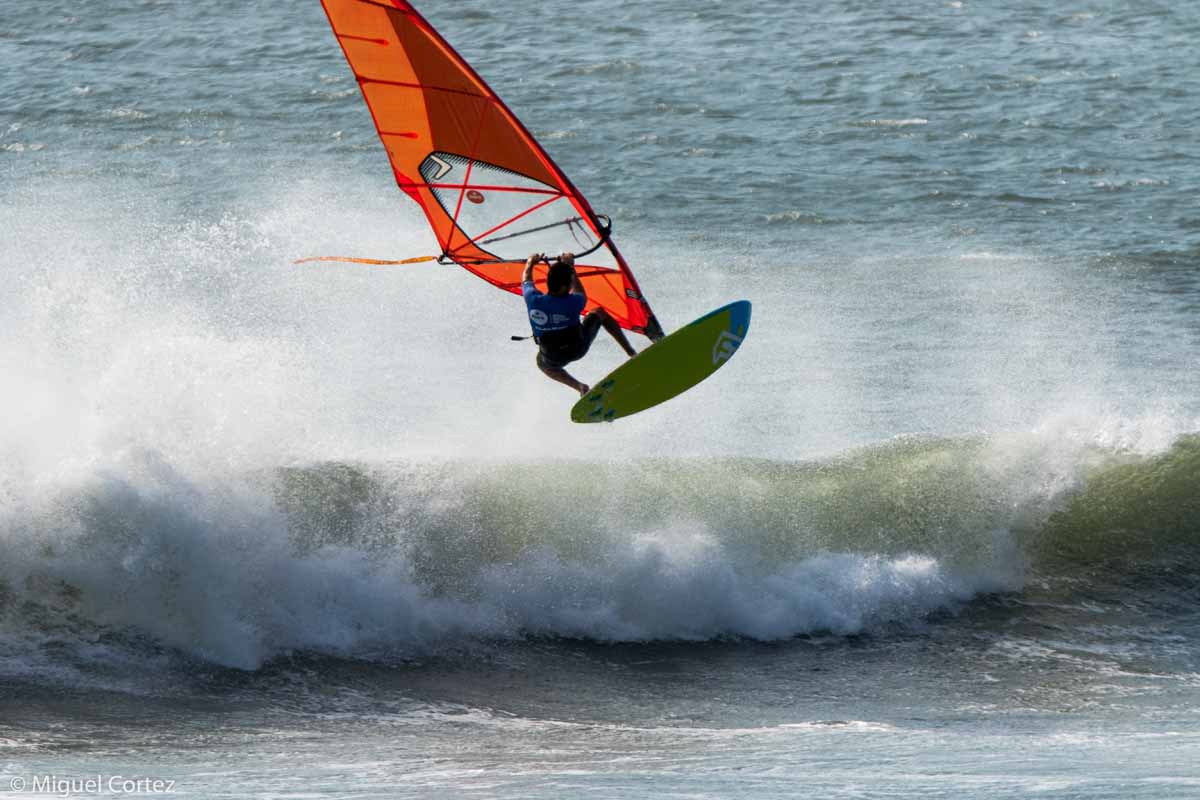 With 4 men left standing and the conditions still firing, the heats were sure to be spectacular. The riders did not disappoint. The first semi was a battle between tour veterans Kevin Pritchard and Camille Juban. Kevin and Camille traded waves back and forth with each dropping big scores, but it would be Camille who would come out on top. 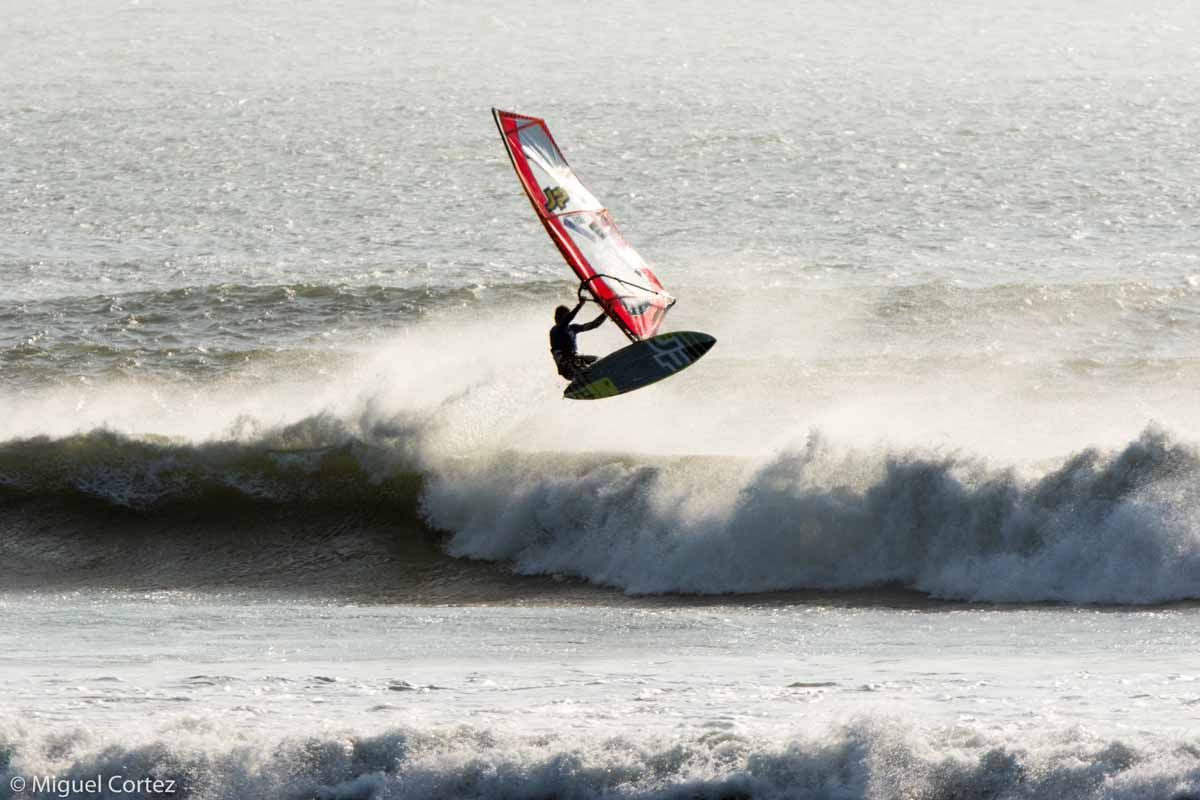 The second semifinal was a battle between AWT newcomer Ben Severne, and regular star Morgan Noireuax. Morgan started the heat with a huge wave smashing it to bits and nabbing multiple aerials and under the lip hacks. Ben was consistent locking in multiple excellent wave scores but came just short of Morgan, setting up the final between Morgan and Camille. Ben and Kevin will have to fight it out for 3rd place in their next heat.

Thus far Camille is the only one still undefeated, heading to the final. It will be no easy task for him though to beat an on form Morgan Noireuax. Stay tuned for the rest of the action, which we will likely finish on Friday.

A special thanks goes to Xavier Fourcade with RideScoreMobile.com for providing us with the application used by judges to provide live scoring for spectators. Go on over to our live page to follow the contest. 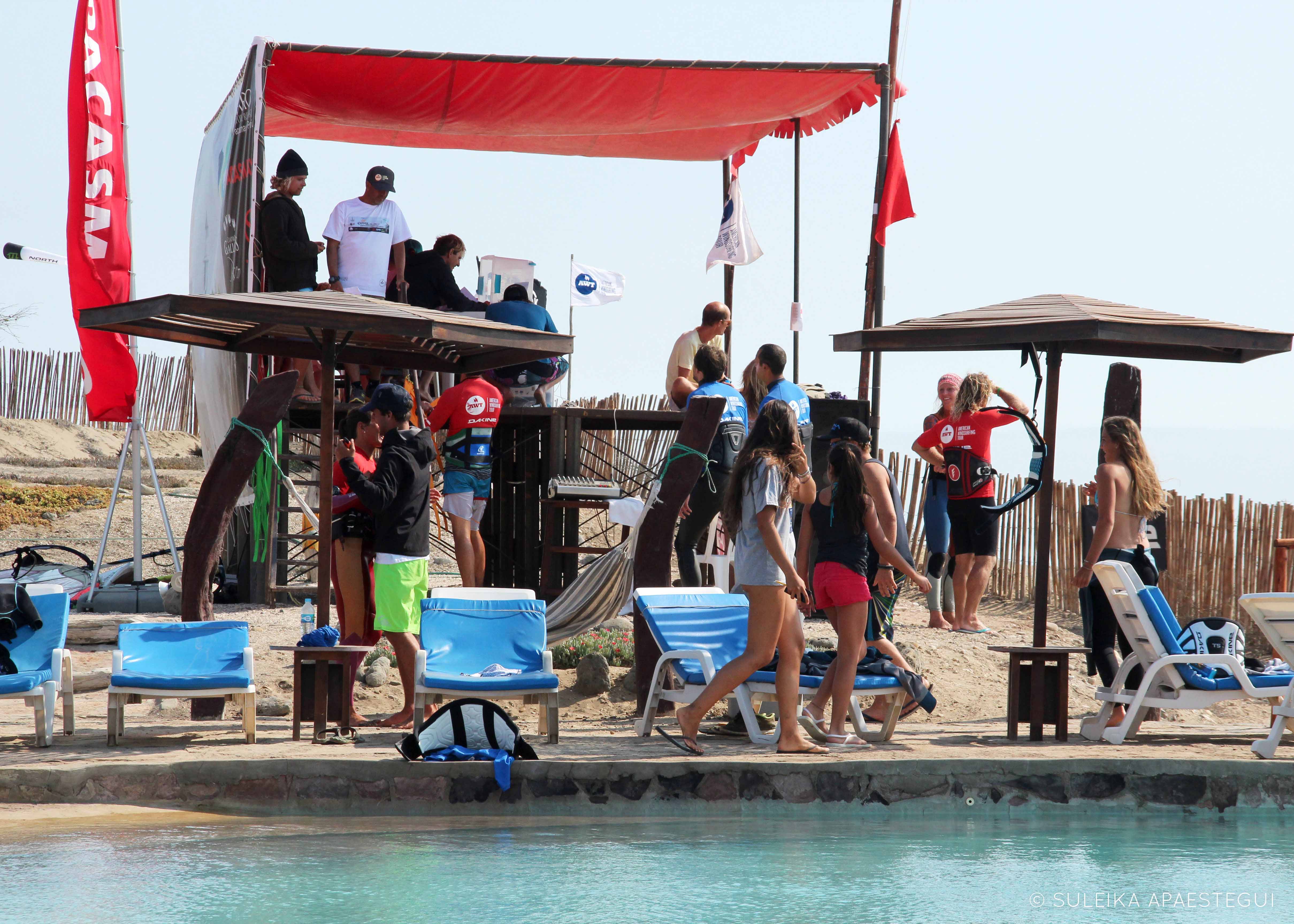 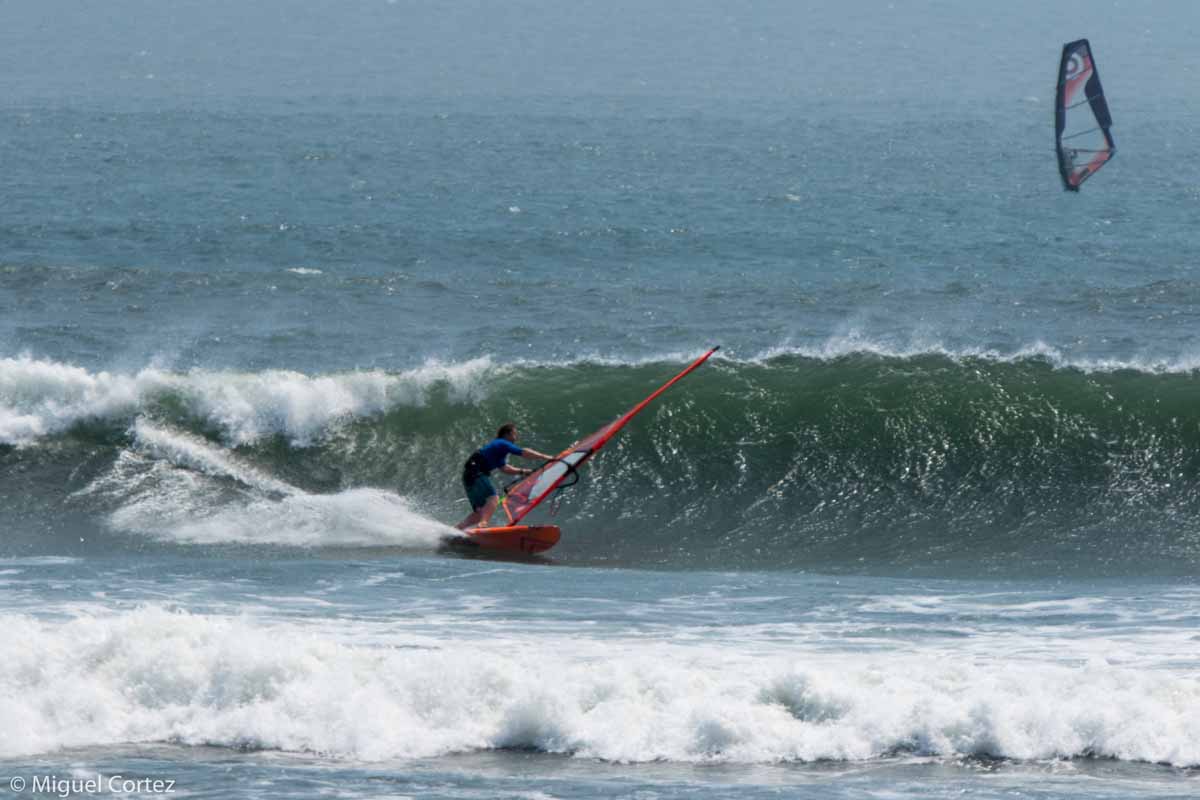 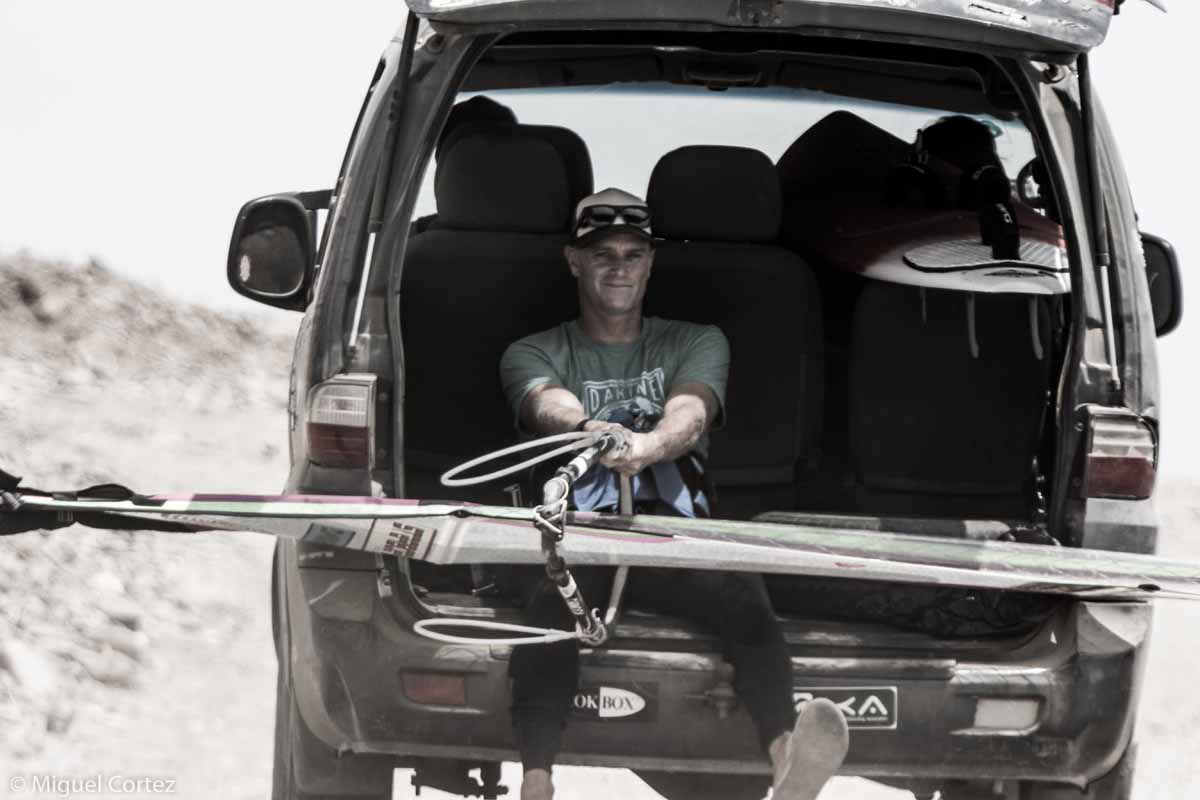 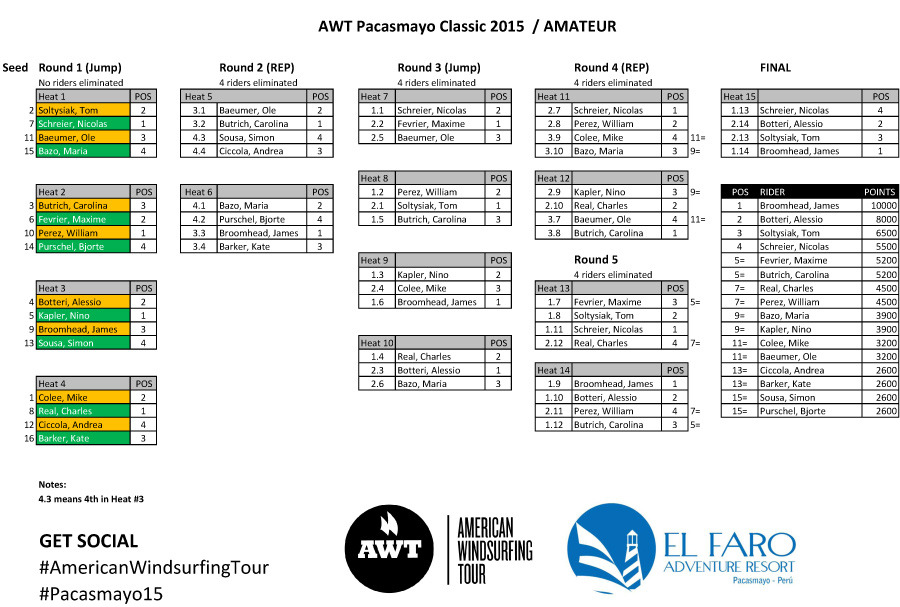 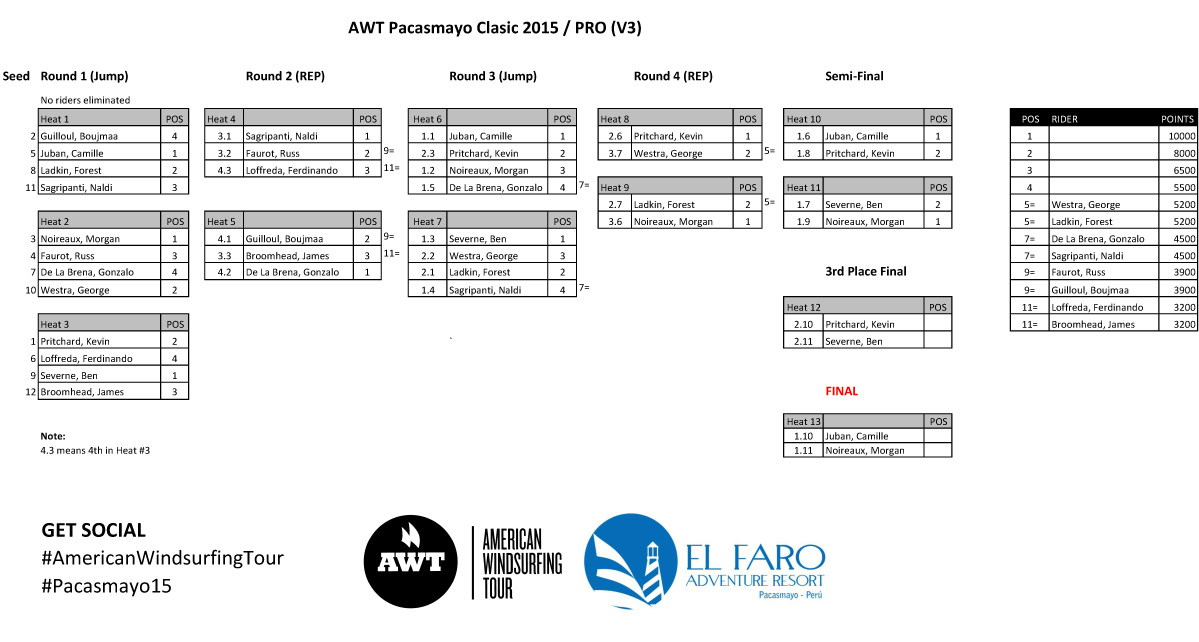 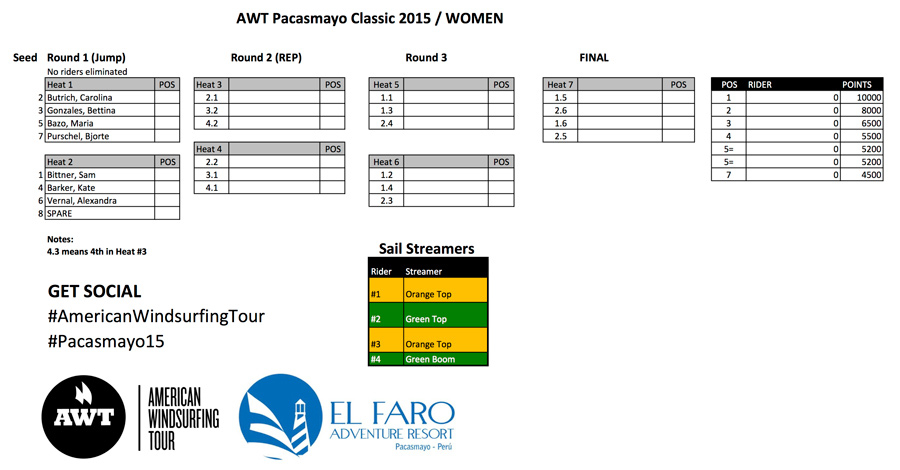