The day opened with the Amateurs, Masters, Grand Masters first rounds. The early part of the day saw moderate winds around 15-20 knots, enough for 2 waves to count and no jumps in early rounds. Riding was strong across the divisions with the strongest performances from the young guns in the youth division.

The Youth division was dominated by Jake, Takuma and Takara who were all ON FIRE with all 3 powering into the final. The 4th rider to make it into the final was lesser known local Omaezaki rider Haru Matsui. These riders fought their way to the top of a very large youth contingent in the local area of Omaezaki. Unlike so many places in the world, there is a thriving youth scene here with almost 50 young riders heavily involved in the Omaezaki Windsurfing Club, known as the OWC. 50 youth in a club is very impressive in any country but in Japan there are other youth clubs around the country that are even bigger. It is very obvious that windsurfing in Japan is experiencing a major resurgence and these youth training camps are clearly a major part of the resurgence. This along with a strong university student engagement format that follows the kids as they grow and further their education. Something for the rest of the windsurfing world to observe and emulate this stellar resurgence. 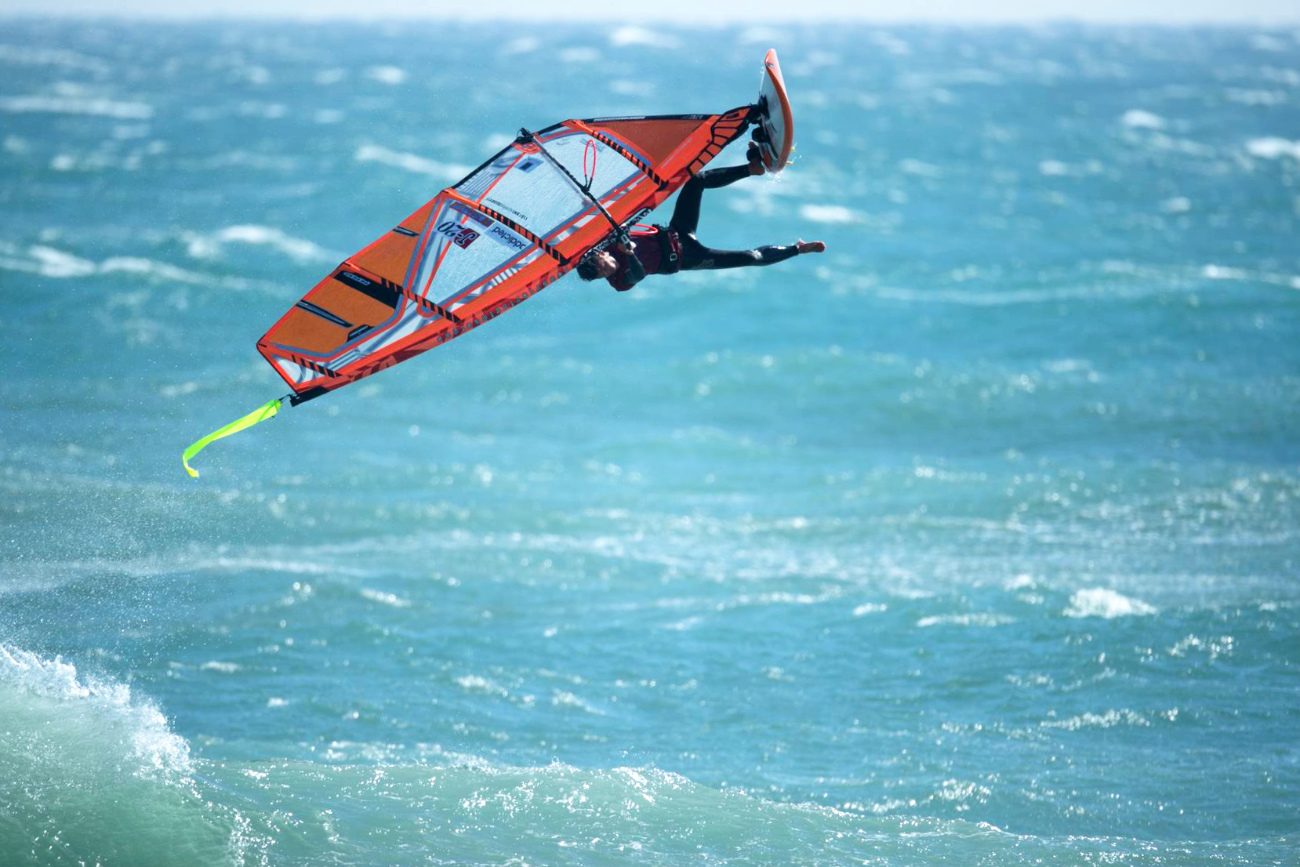 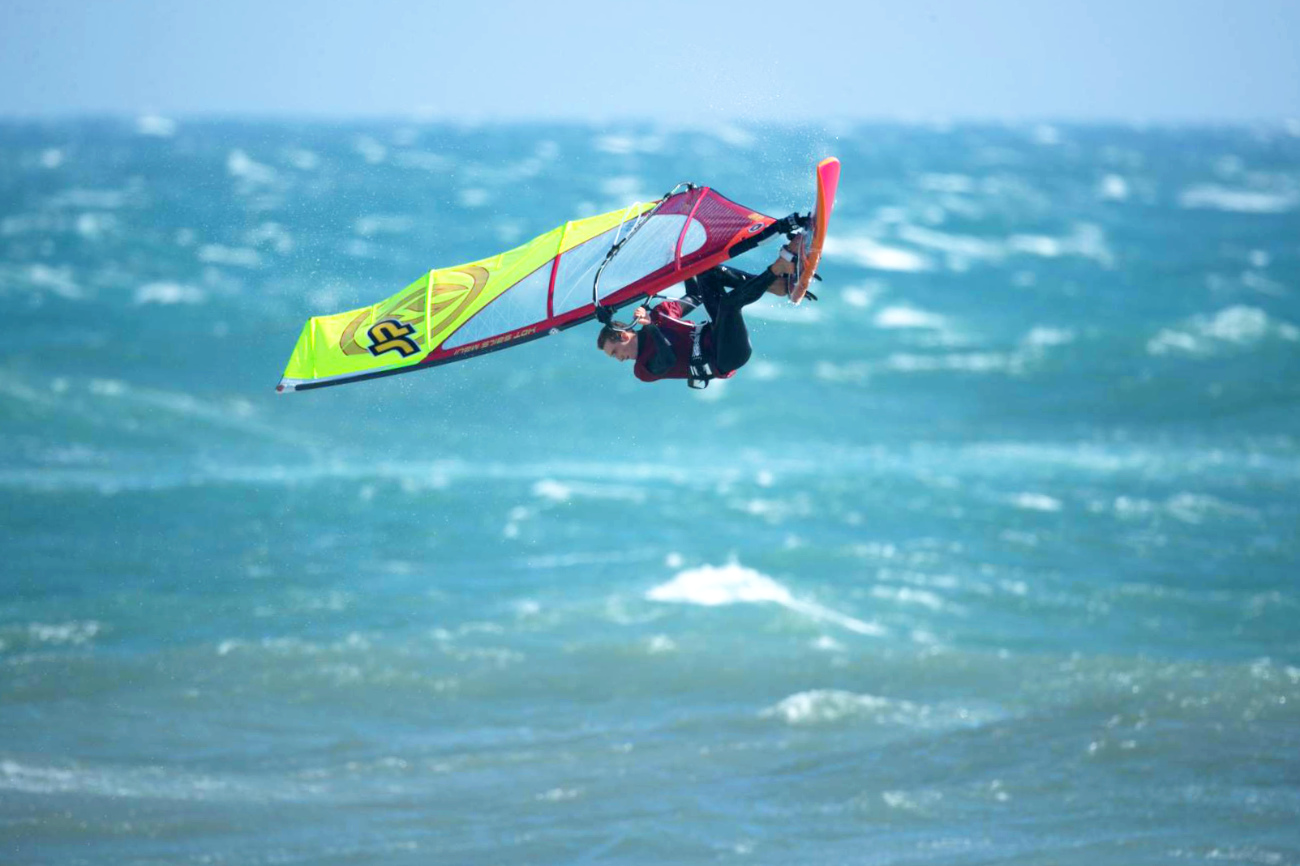 The Amateur bracket saw high IWT ranked riders Jeff Henderson and Palì Gueltrini seeded into the second round with an array of strong local riders lined up in the first round to battle through to challenge the internationals. One of the highlights was 14 year old Hayata Ishii who had a great heat against Kaito Katsumata. Hayata is Takara’s younger brother. He competed with the IWT in Baja last year for the first time and impressed us all. Yesterday he showed that he continues to improve with his aggressive carving having improved significantly from seeing him in Baja last August. The competition was whittled down to the top 8 riders with: Jeff Henderson v’s Ryu Noguchi, Hayati Ishii v’s Imai Massanori, Yuki Ikoma v’s Atsuki Ikoma, Palì Gueltrini v’s Yuji Tasaka.

The Masters saw top ranked riders Simeon Glasson and Yuichi Nishina seeded into round 2 while the other riders battled in round one man on man heats to advance.

The final heats for all these rounds will be completed in coming days so we are watching the forecasts closely.

The first round of Pro Women saw 4 top riders emerge: Kana Sasao, Arrianne Aukes, Kazuki Ishihara, Motoko Sato. Sato is the Japan Women’s champion and has been for 13 years straight. She was the Aloha Classic Champion in 2004, and was 2nd last year in the Aloha Classic. A powerful rider with vast local knowledge, Sato was the number 1 seed and the one to beat going into the final. Arrianne Aukes from The Netherlands is one of the top freestylers in the world and is more recently emerging as a powerful wave riding talent. She enters the competition with a serious shoulder injury that should have put her out of contention. However, there is noting more fierce and determined than an international athlete on tour. Arrianne overcame the pain to not only sail but to dominate her early heat to claim her spot in the final. Kana Sasao is one of the local organizers of the event and an impressive rider herself. She was charging the lip and using her extensive local knowledge to power past Minako Mori in the early heat to claim her spot in the final. The 4th rider to make it into the final was the 19 year old Kazuki Ishihara. Kazuki is a fearless young woman and her wave riding is improving rapidly. She told us last night that it is her dream to join the tour and with her rapidly advancing skills we have no doubt she will be a serious future contender for the overall title. The eldest of the Omaezaki youth scene, she is a leader of her generation. 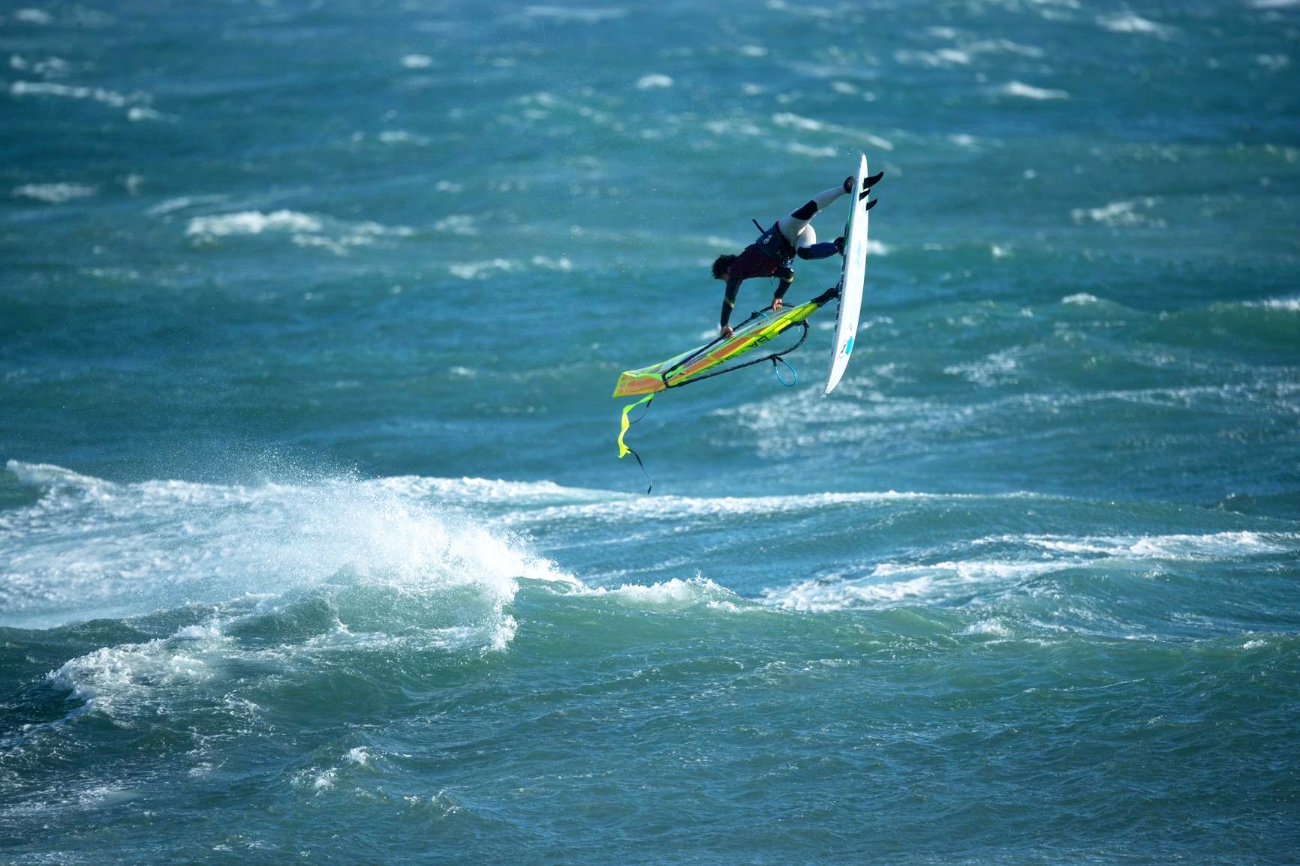 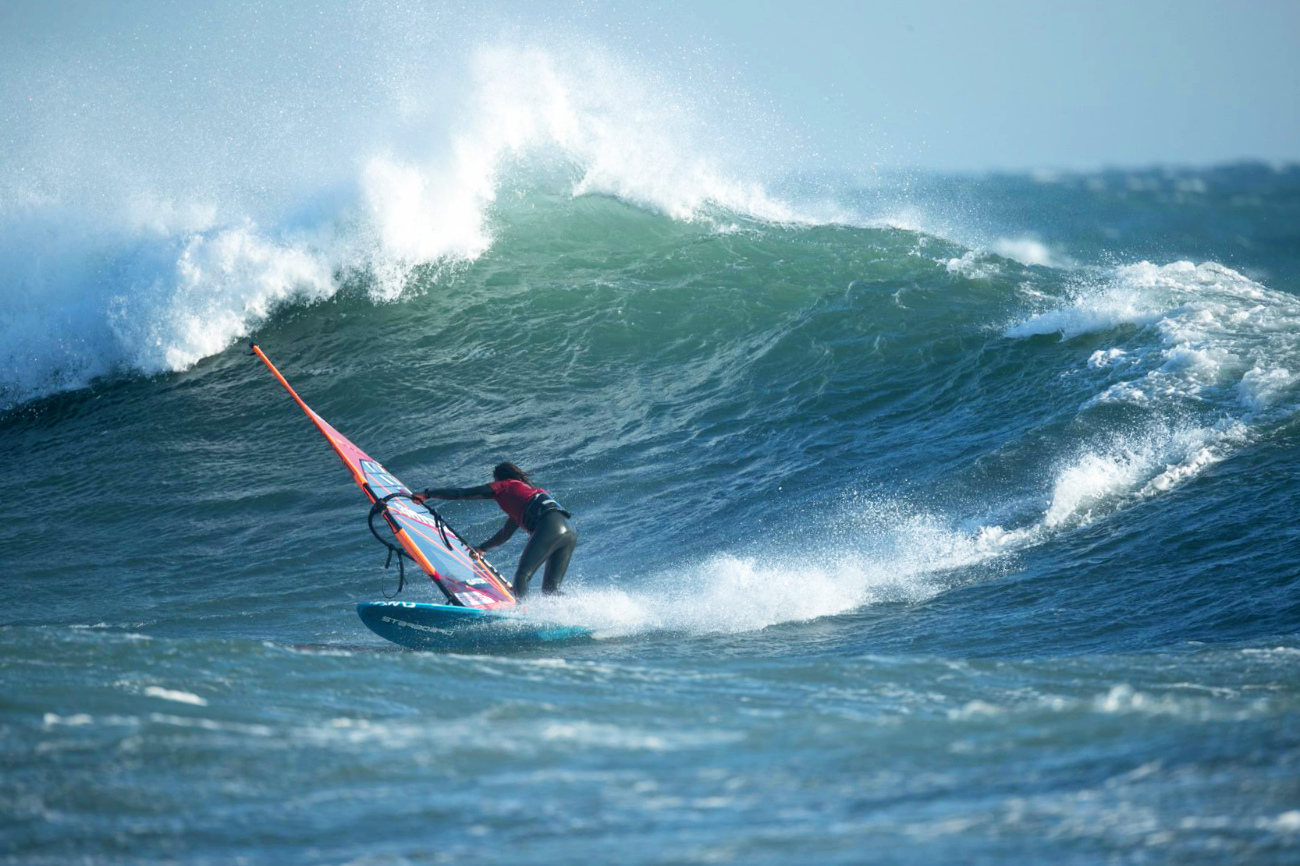 The Pro Mens fleet saw conditions at their peak and the standard of riding was impressive. The top 10 ranked riders were seeded into the second round. Even without those top 10 riders, the first round was still stacked with talent. Jake Schettewi, Bernd Roediger, Berk Yalgin and Takuma Sugi battled against a powerful array of strong local riders all vying for their chance to advance. The single elimination man on man heats were unforgiving. Any errors, any at all, were punished by elimination. With only a remote chance of a double elimination round due to unstable forecast for the days ahead, the pressure on riders to perform in these wild conditions was especially intense.

For some riders in round 2, the pressure was too much. Errors of judgement were made by a few great riders. Edvan Souza was a little late for his heat and this affected his normally clear headed competition strategy. As he charged out from the beach, only 30 seconds late for his heat, he was clearly fired up because on his first run out he pulled a HUGE and super radical loop that brought a massive cheer from the crowd. With that, it seemed his rival Jake Schettewi was toast. Jake responded with a big a beautifully clean back loop. Ever the clear headed and unflappable competitor, Jake was down to business, racking up the wave scores and jumps with a precise and strategic approach. He was moving around the competition zone for maximum point scoring. Meanwhile Edvan appeared to be letting the pressure get to him. He went for a radical back loop that turned into a DOUBLE BACK LOOP and crashed out, coming out in water start position, limiting the maximum points of even that radical move. We later learned that he had lost control of his rig mid flight, losing his back hand contact on the boom, and flew into the second rotation completely out of control. He was lucky to emerge unscathed. The result was Jake pushing out one of the really big names in round 2, with Jake advancing into the top 8, leaving the extremely talented Edvan to ponder what might have been. 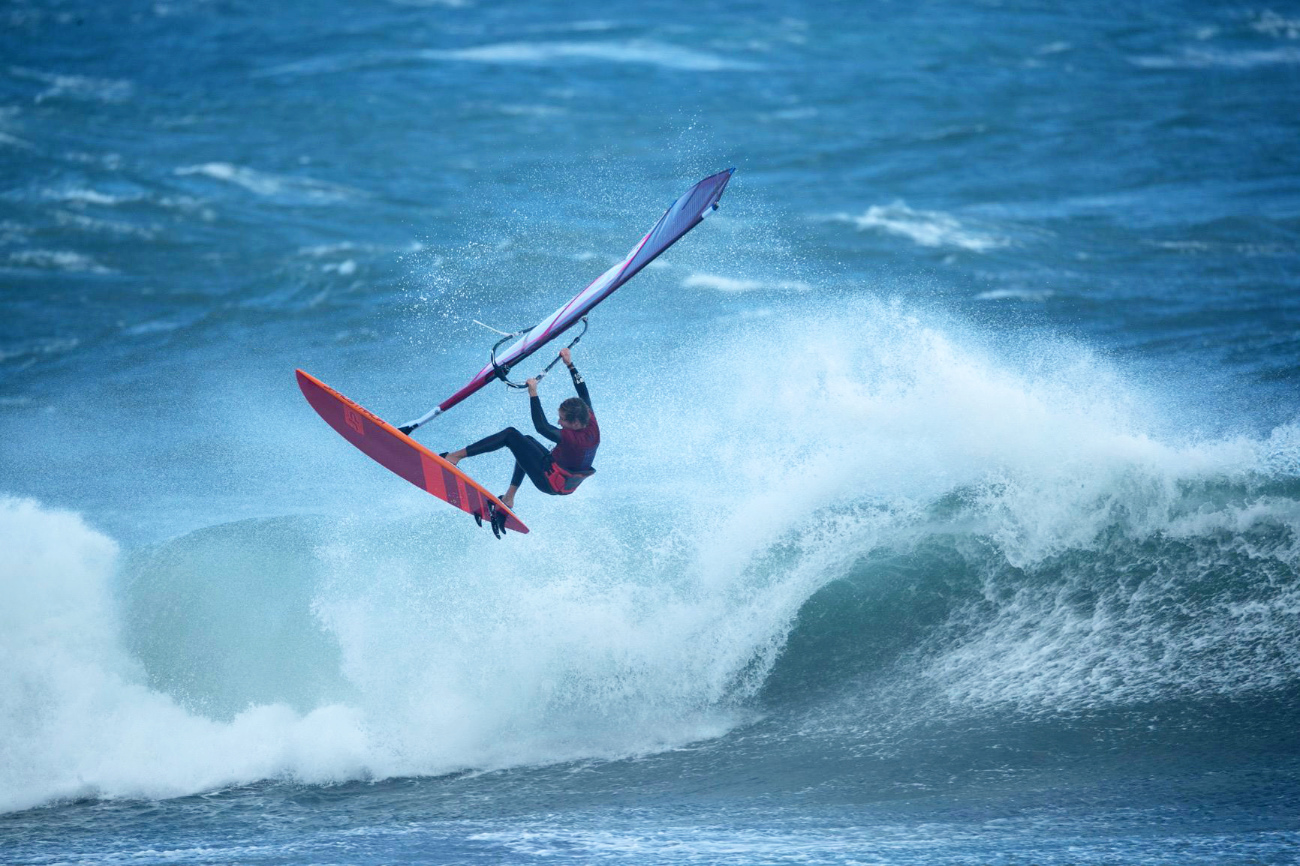 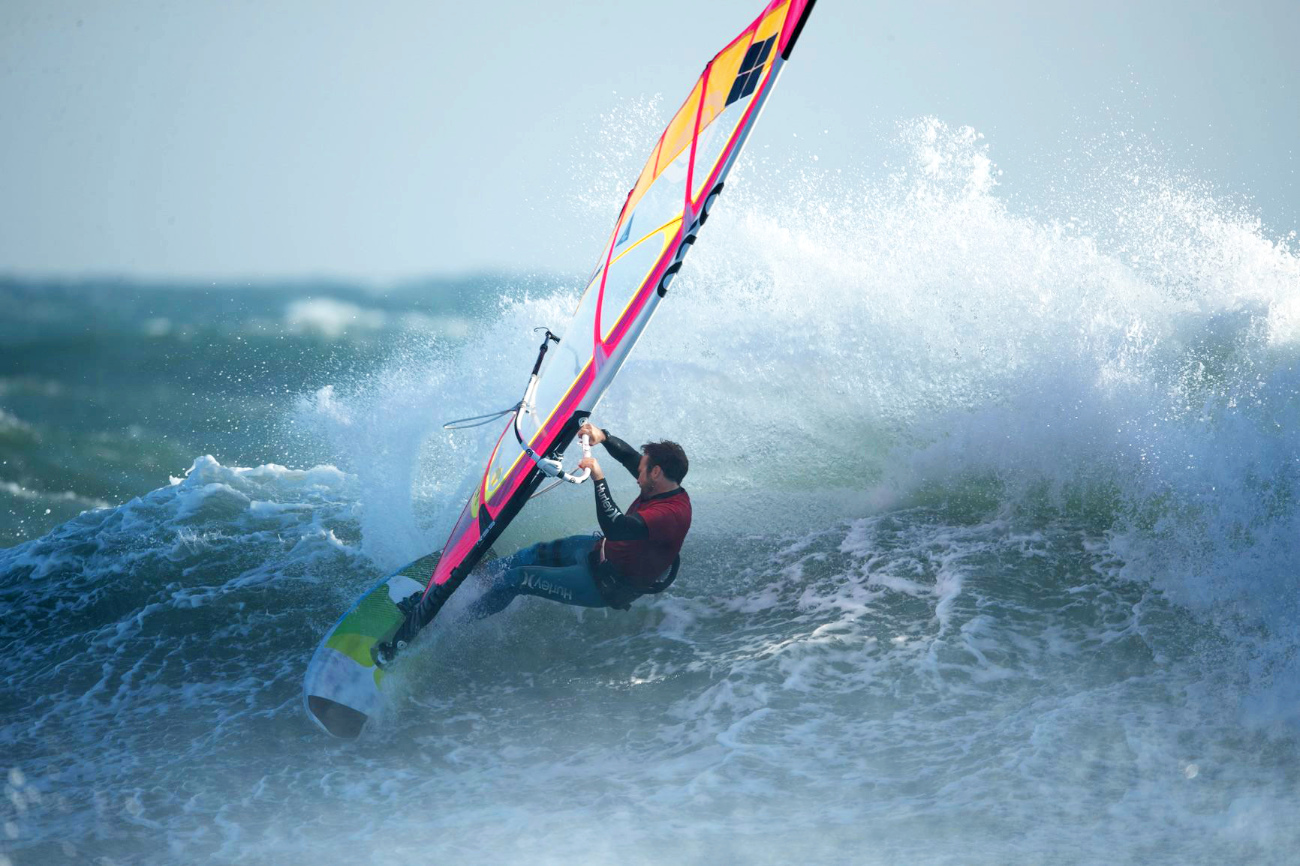 In another round 2 upset, the low ranked but highly credentialed Bernd Roediger came up against Morgan Noireaux. One great riders of the tour was going to be knocked out early. All the expectation was on Morgan who has been competing on tour far more than Bernd over the last couple of years. Bernd has been competing more on the APP sup world tour and last month came 2nd at Sunset on Oahu with some very impressive big wave carving. Expectation is a dangerous thing in international competition… Morgan threw a big clean backloop and had some great waveriding hits with his signature surgical moves and flowing style but it was Bernd who stole the show with impeccable wave timing and wave selection allowing him to hit much bigger peaks with much more powerful timing. IN a huge upset, Morgan was knocked out in round 2, his first heat as a top seed.

In yet another giant upset, young Takuma Ishii came up against legendary wave rider Graham Ezzy and knocked him out of the competition. Astonishing from the young 16 year old local Omaezaki boy who has come a long way from his early days as an Amateur. Ezzy sailed well, had one strong wave score and a double forward attempt that landed in crash position but impressed the crowd. In the end though, Takuma was stronger on the day. Taking out a giant in the waveriding world like Ezzy will be a memory that never leaves him.

Round 3 of the Pro Men bracket saw the top 8 line up in 4 x man on man heats with terrific talent on show. Boujmaa up against Jake, Boujmaa throwing MASSIVE stalled forwards brought enthusiastic cheering from the crowds arrayed along the beach, the hill, and the judging area. Jake threw his hallmark high and clean backloop, not as radical as Boujmaa’s stall forwards but significantly cleaner. IN the wave riding Boujmaa was going for it, big hits and powerful flow that we have come to expect from this legend of the sport. Impressive as Boujmaa was, it was Jake and his surgical precision with perfect timing and powerful rail to rail carving, emerging victorious. Jake was the first rider in the bracket to progress to the Pro Mens Final.

Bernd was up against the radical young gun local Takuma Sugi. Sugi sailed very aggressively and very well but he was no match for Benrd’s power, timing and flow.

Russ Faurot was up against the other hot young gun Takara Ishii. Russ sailed powerfully but it was Takara who sealed the deal. 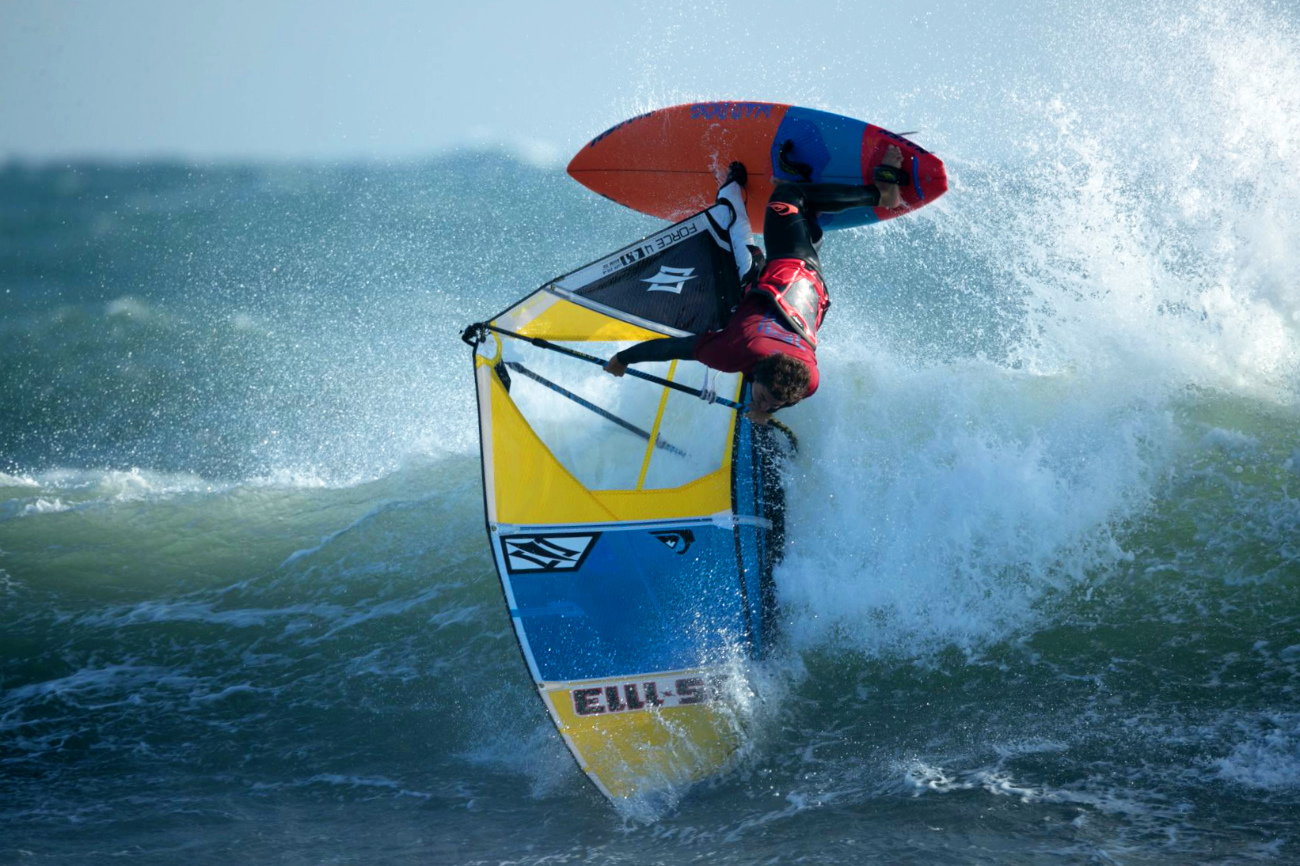 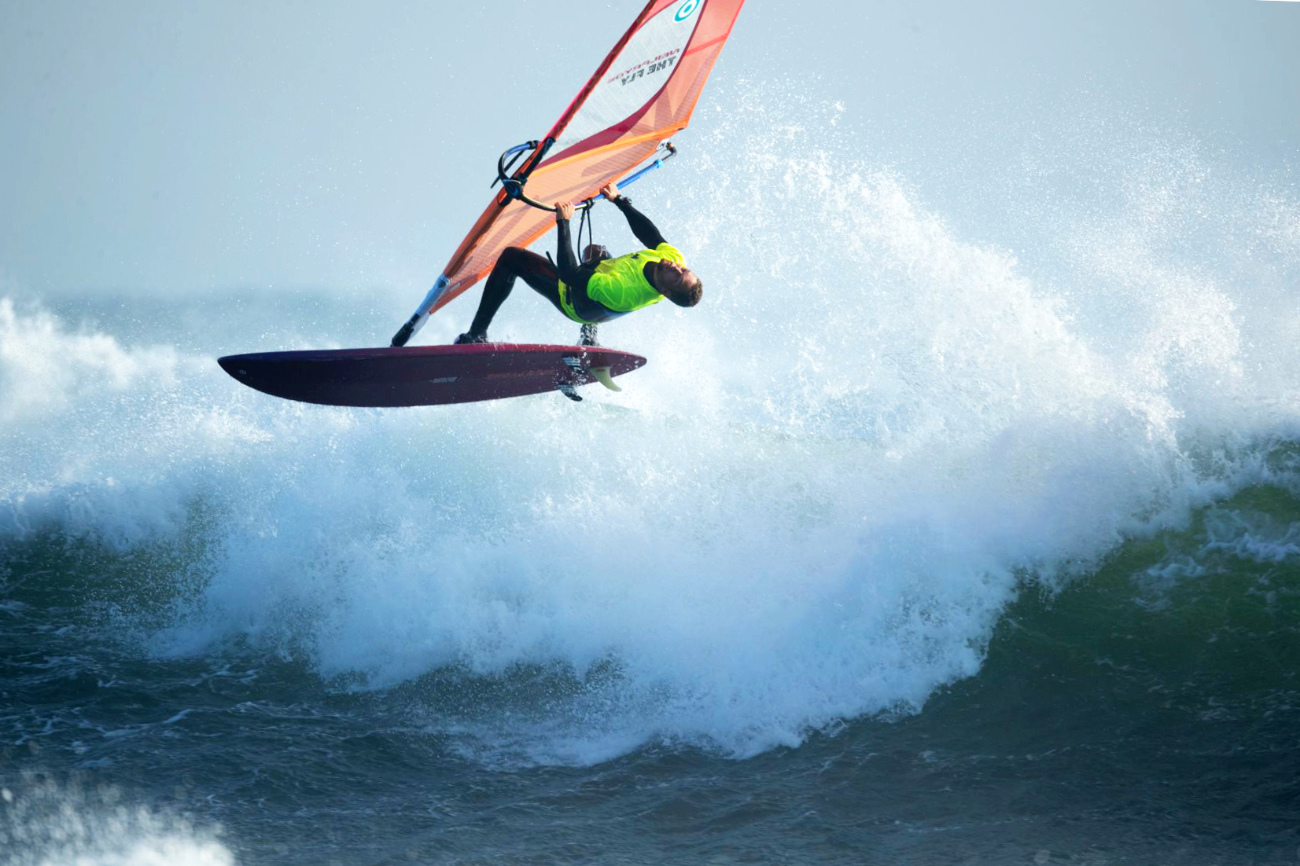 In the final man on man heat of the semi finals, it was Levi Siver against Antoine Martin. Levi was RIPPING powerful turns and punching aerials, but he couldn’t match Antoine. His aerial game heading out jumping or down the line aerial takes and aerial 360’s impressed the judges. Antoine was very strong to beat the powerful performance from Levi and take the 4th spot in the Pro Men’s Final.

To give the men a well deserved rest before their final, the Pro Women’s final hit the water to put on a show for the crowds that included the Mayor of Omaezaki by this time. The final was late in the day and saw very impressive riding.

Results are under wraps until Saturday night, tempting though it is to tell you now…

The Youth final was the last heat of the day with the sun almost set, and it was a beautiful sight to behold. The setting sun, the biggest waves of the day, the wild wind and a new generation strutting its’ stuff and making its’ claim for greatness was a great way to end the day. Once again, the results will remain sealed until the big party on Saturday night.

The day was a great success, highs and lows, drama and upsets, electrifying action and a very excited town across the coastline cheering for all the champions. The return of international Wavesailing to Omaezaki is looking like a huge success and there is a lot of excitement around here. 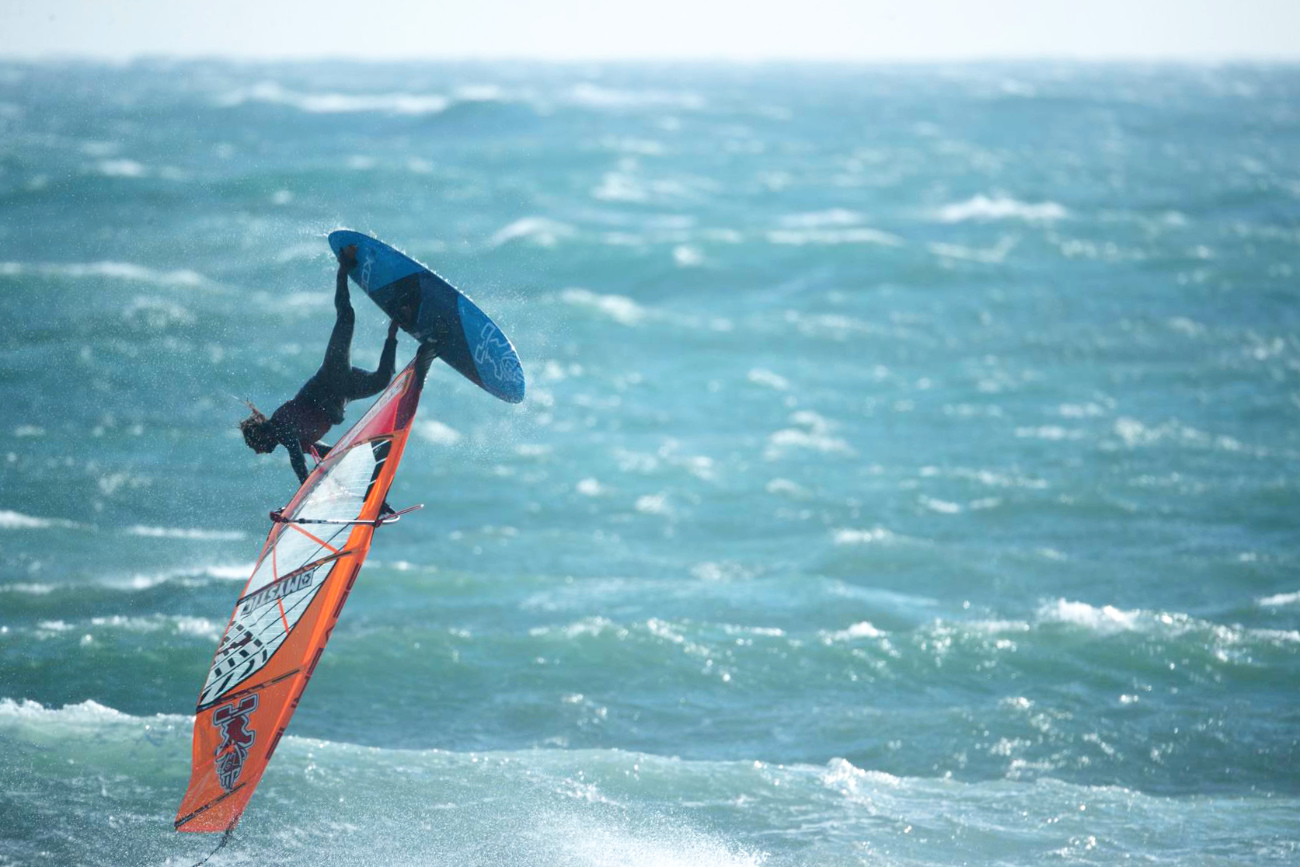 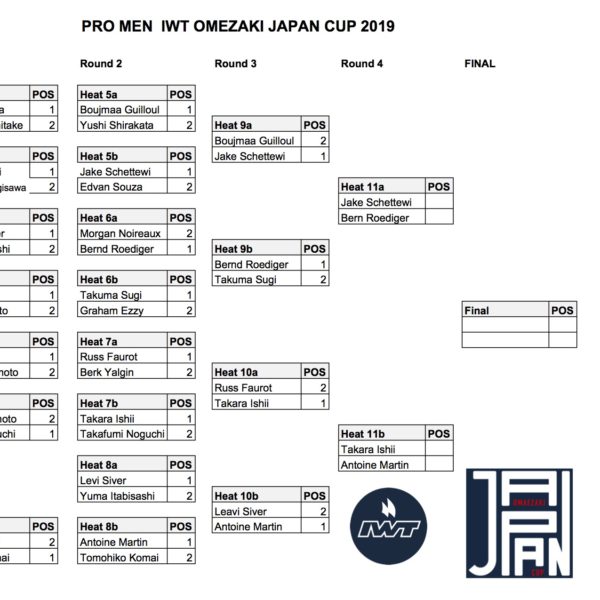 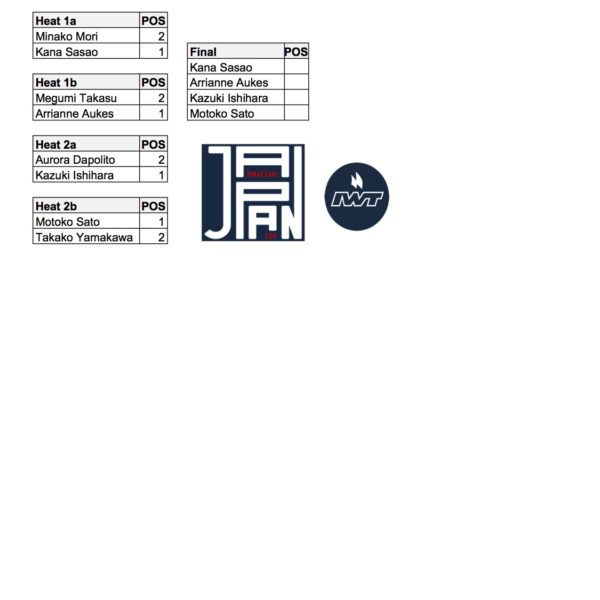 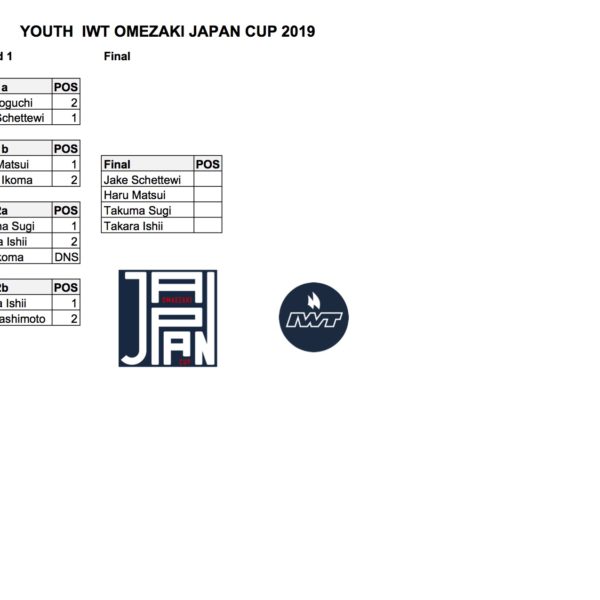 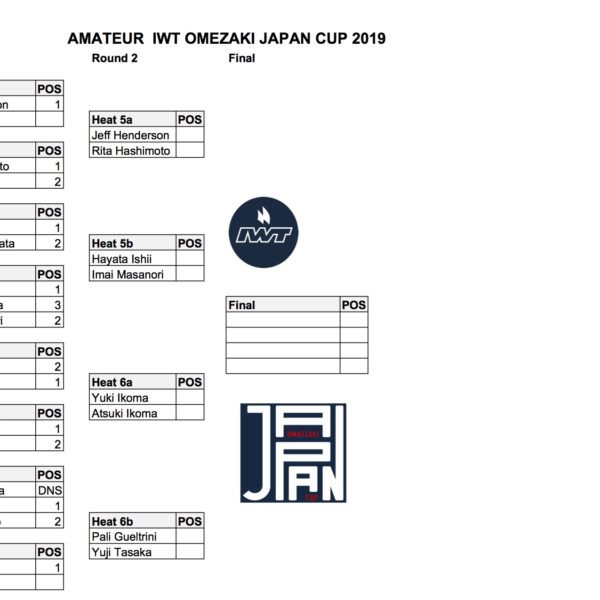 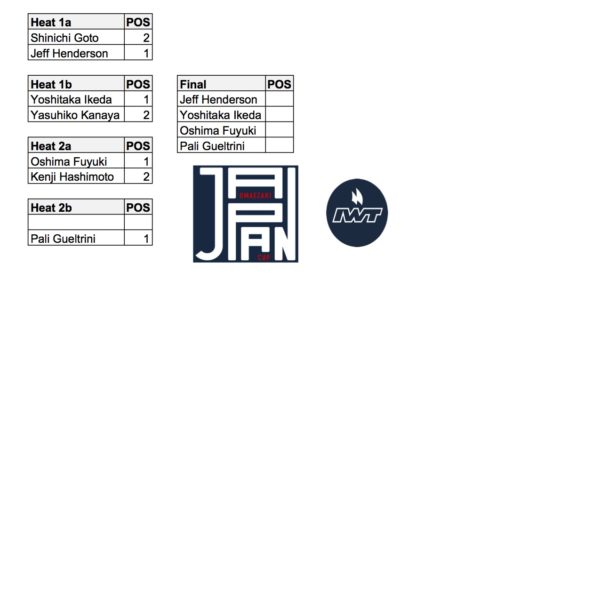