The Riders. The Waves. The Dream.

Thomas Traversa takes out the BIGGEST and the MOST RADICAL
titles at the 2022 Big Wave Awards. In a stunning marquee laid out beautifully on an open green field up in Haiku, with glorious views over the West Maui Mountains’ sunset, the best big wave riders on earth. The extraordinary industry and community that supports them all gathered to celebrate those who pushed the envelope most in 2021/2022. With over 160 guests, this event has become the signature social gathering for the big wave rider community worldwide.

We were thrilled to receive welcome and aloha videos from 42 x World Champion Bjorn Dunkerbeck in the Canary Islands, and from World Wave Champion and big wave legend Thomas Traversa in France. These two key people of our community were unable to attend the night but wanted to say hi to the crowd and be a part of the event. We hope to expand next year to have livestream inclusion for the many riders and fans across Europe and the rest of the world, so that all may be able to ‘attend’ this special event.

We were honoured with the attendance of HAWAIIAN cultural leader Auntie Leona and two of her grandsons, one of whom is now running for political office (Chase Keali’imalu Nomura – candidate for Hawai’i State House District 13). We were also proud to host the Pe’ahi hui group who are the Pèahi Ambassador’s official water security for the WSL Big Wave Event and for the IWT. These brave Hawaiians run rescue on their jet-skies and help keep all riders safe at Pe’ahi. We were honoured to have DUKE Kahanamoku Foundation board member Anders Jonsson attend to announce the partnership between the IWT and the DUKE Foundation and present the first annual DUKE college scholarship supported by the IWT in Fred Haywood’s name to a young rider and scholar, Luc Guidroz. 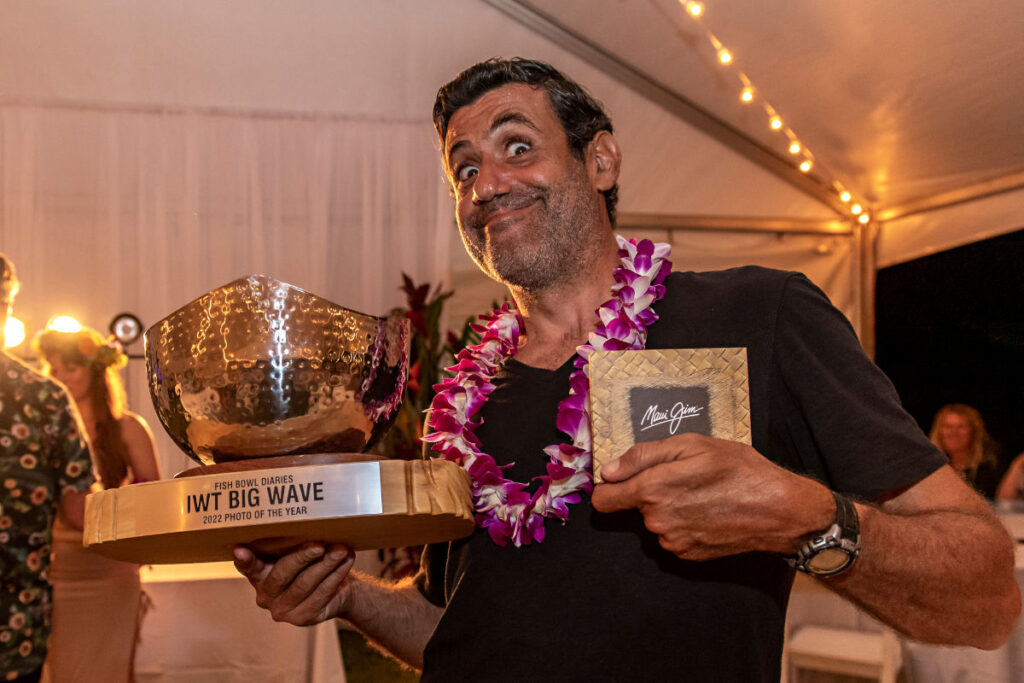 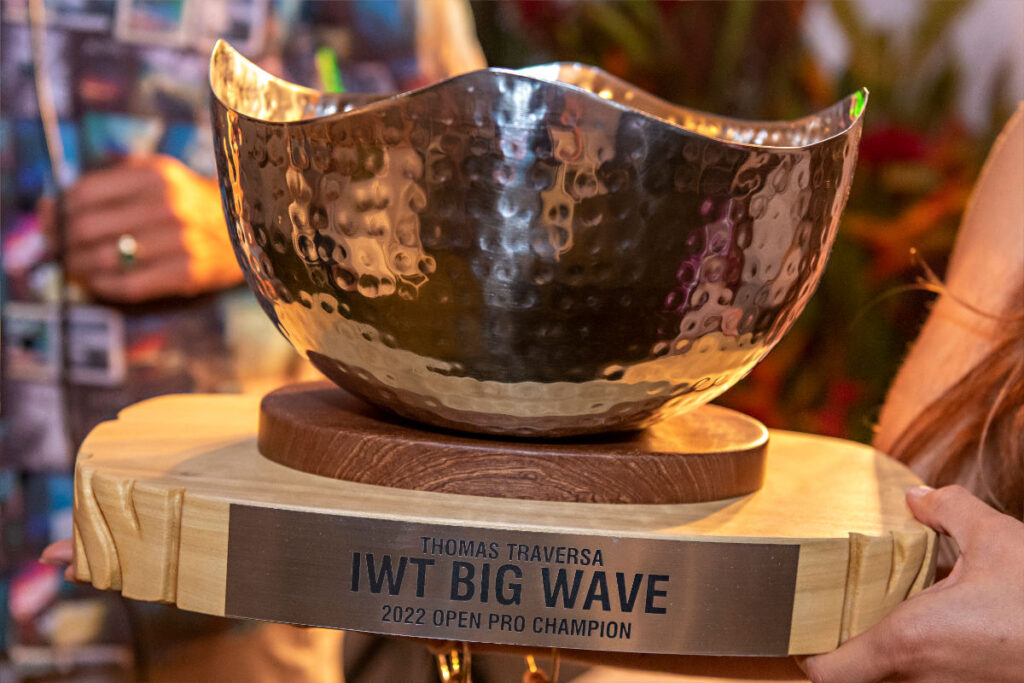 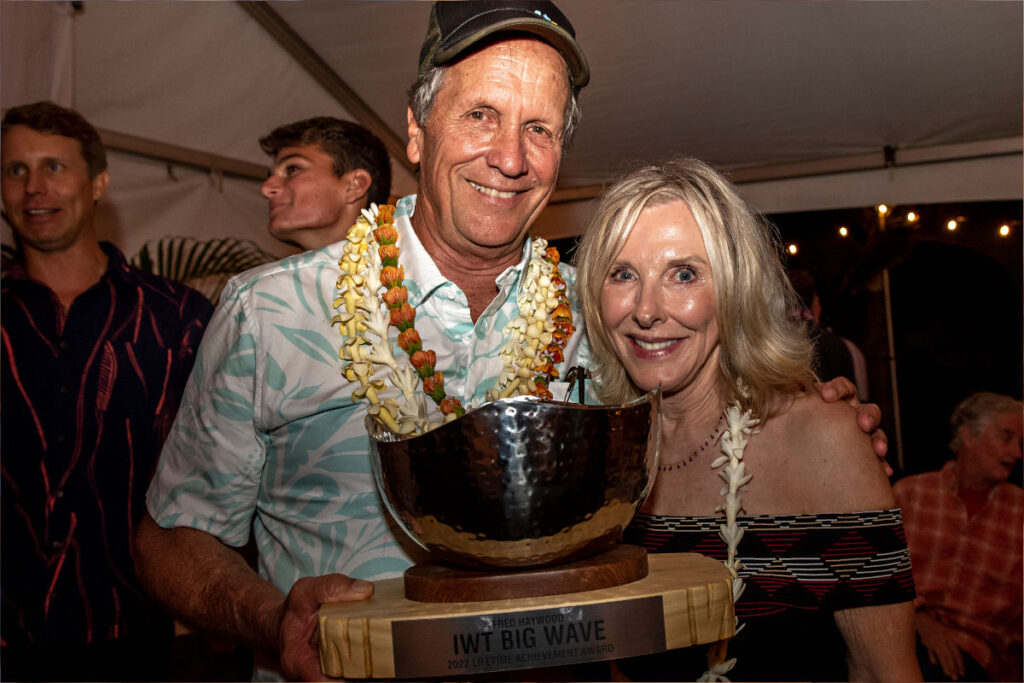 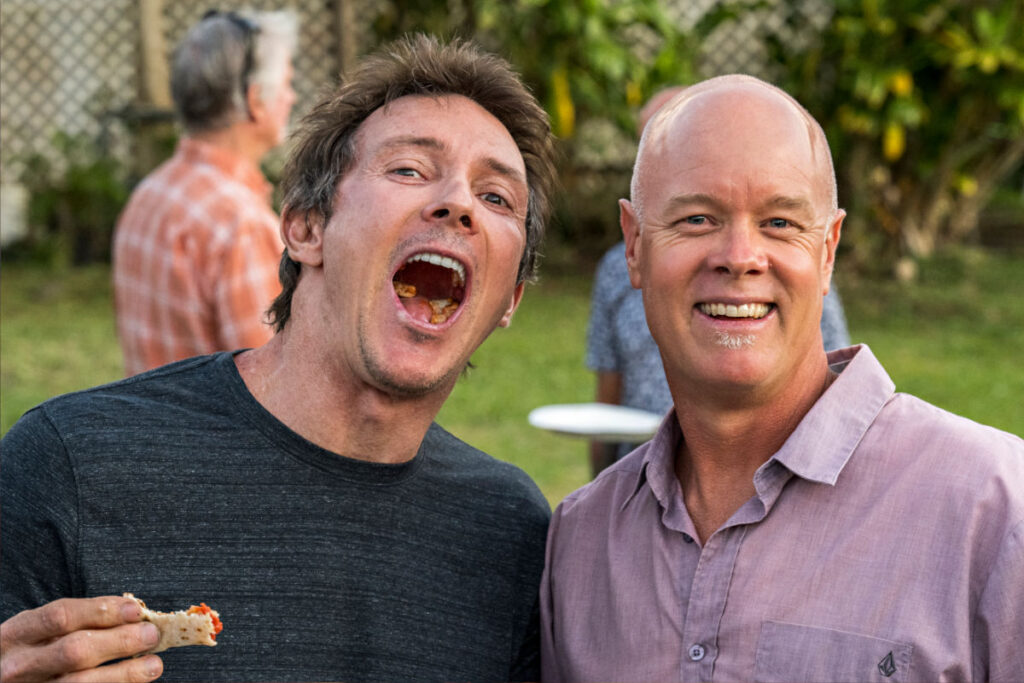 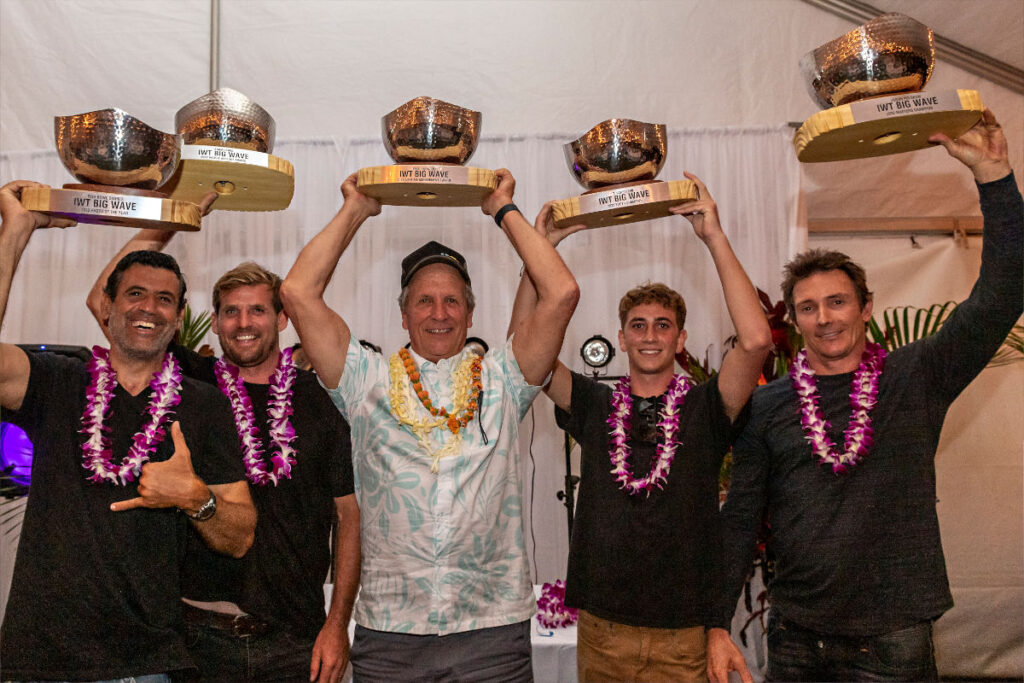 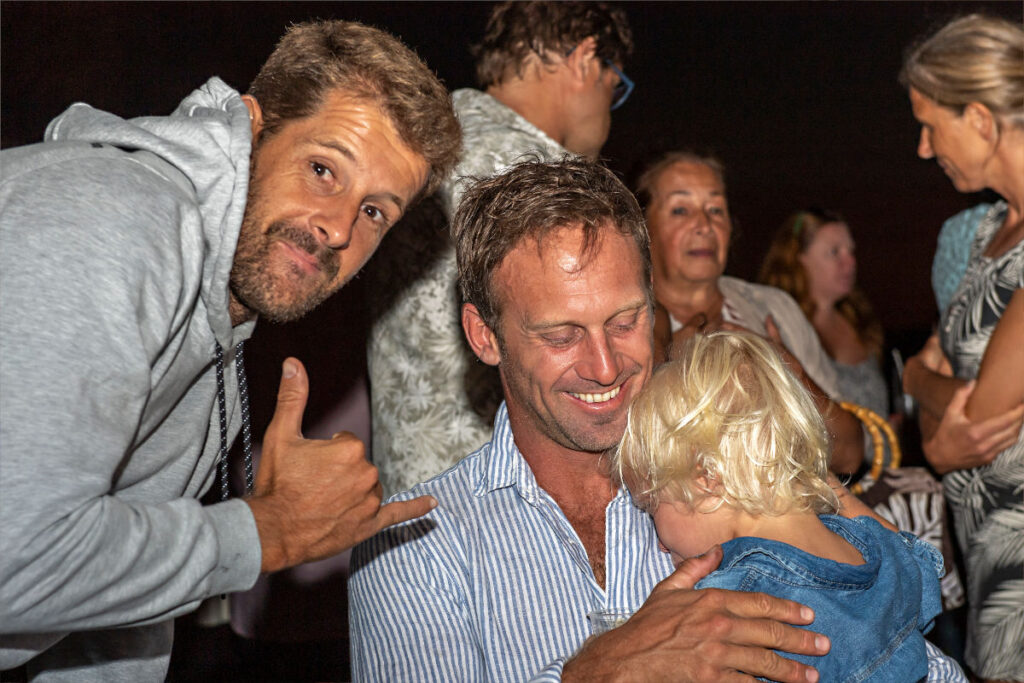 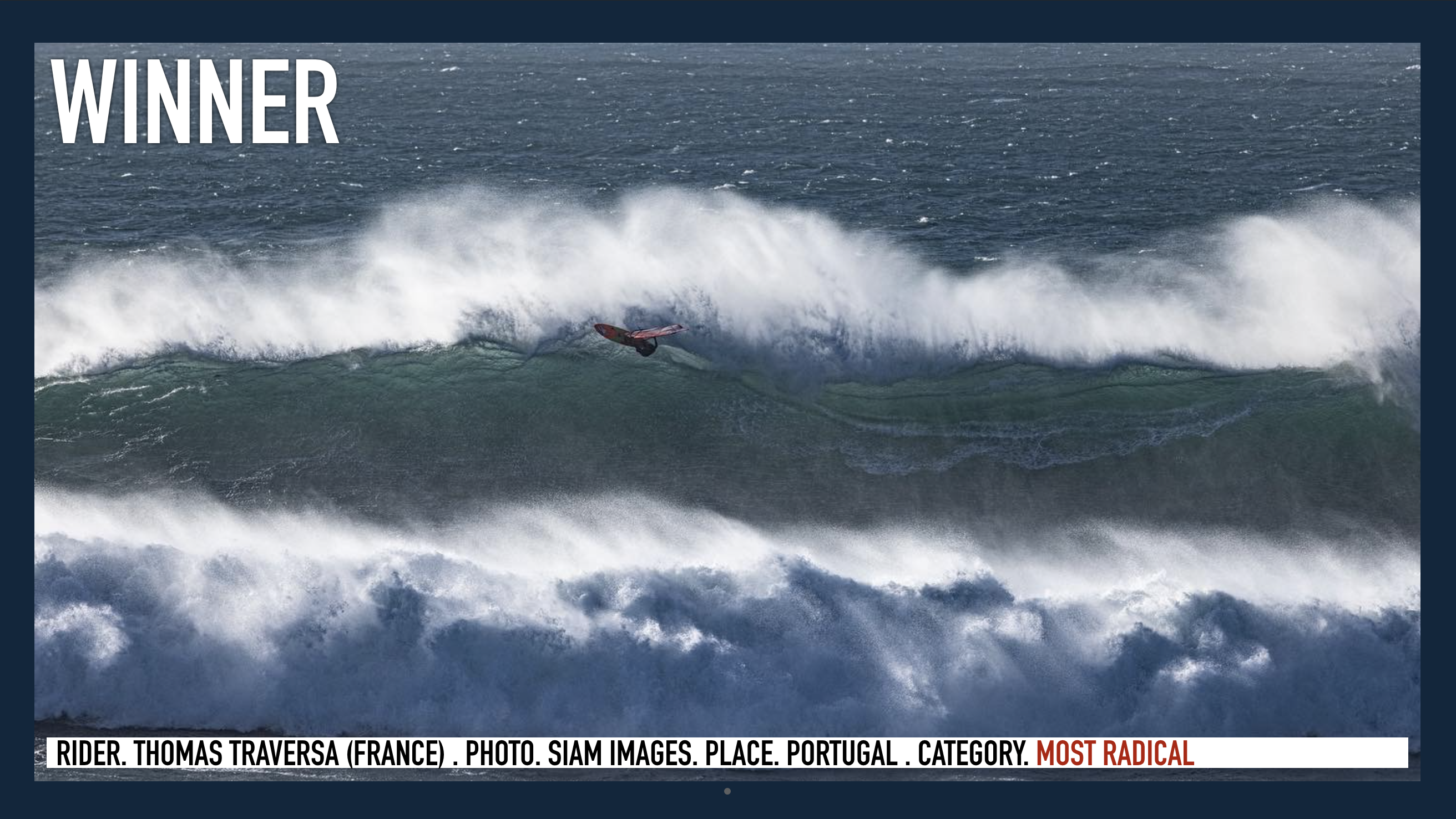 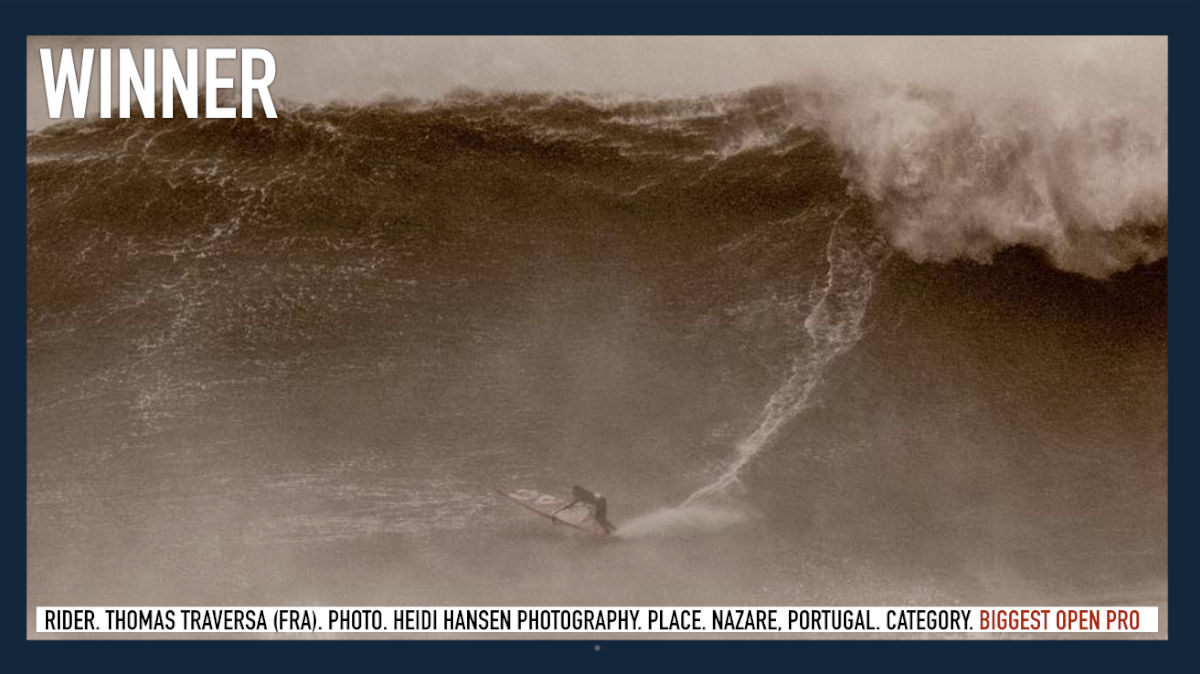 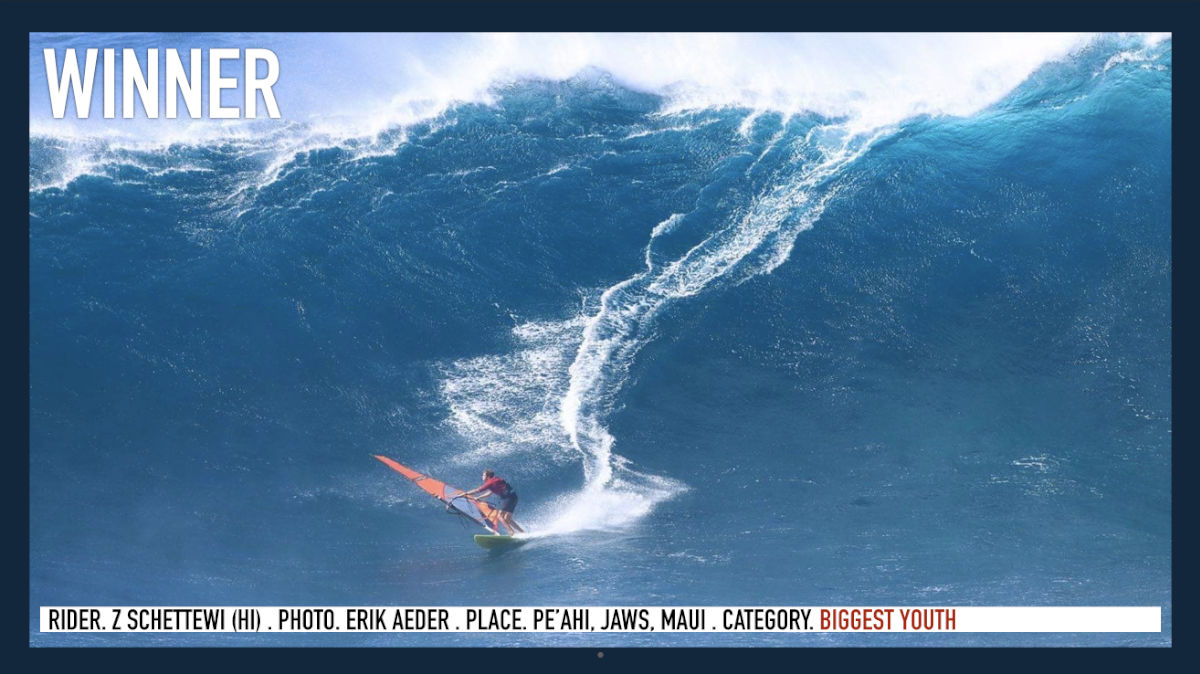 Z Schettewi (USA) – 2022 BIGGEST YOUTH
Z Schettewi dominated the Youth division with this ride at Pe’ahi, while Jason had some strong competition from Arnaud Frennet from Chile who rode a beast of a wave at Pichilemu on Chile’s wild west coast. In the end, Jason’s wave measured just a little bit bigger and he won the title for the second year in a row.
Jason Polakow (ASU) – 2022 BIGGEST MASTERS 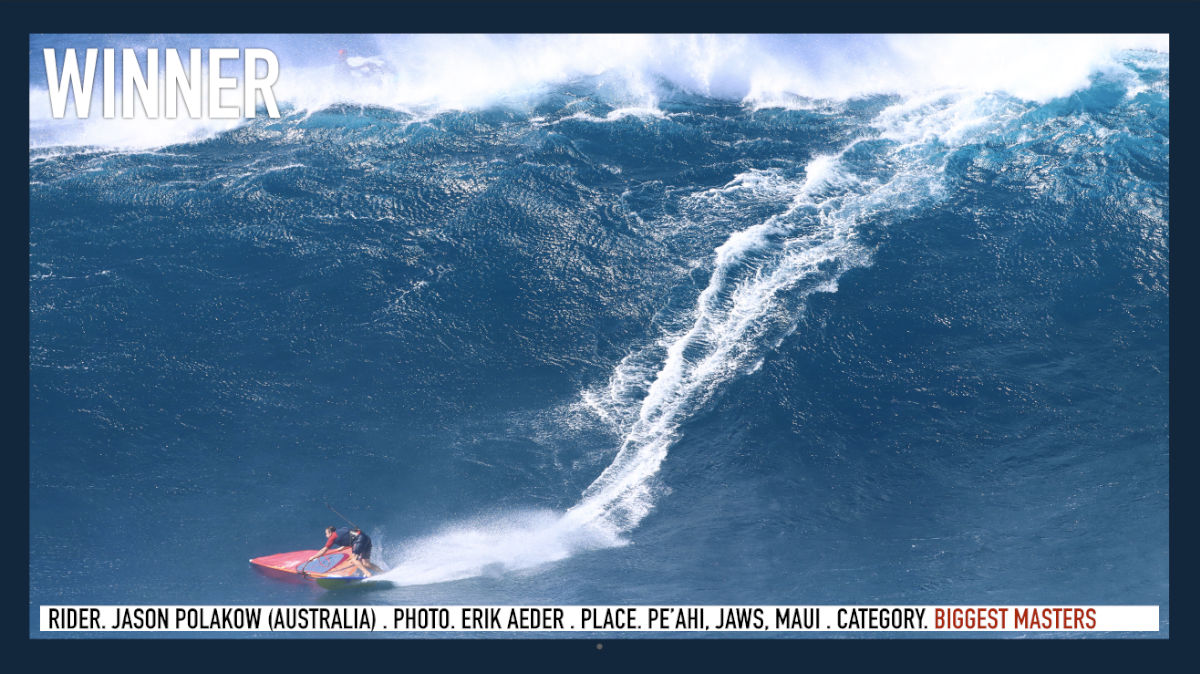 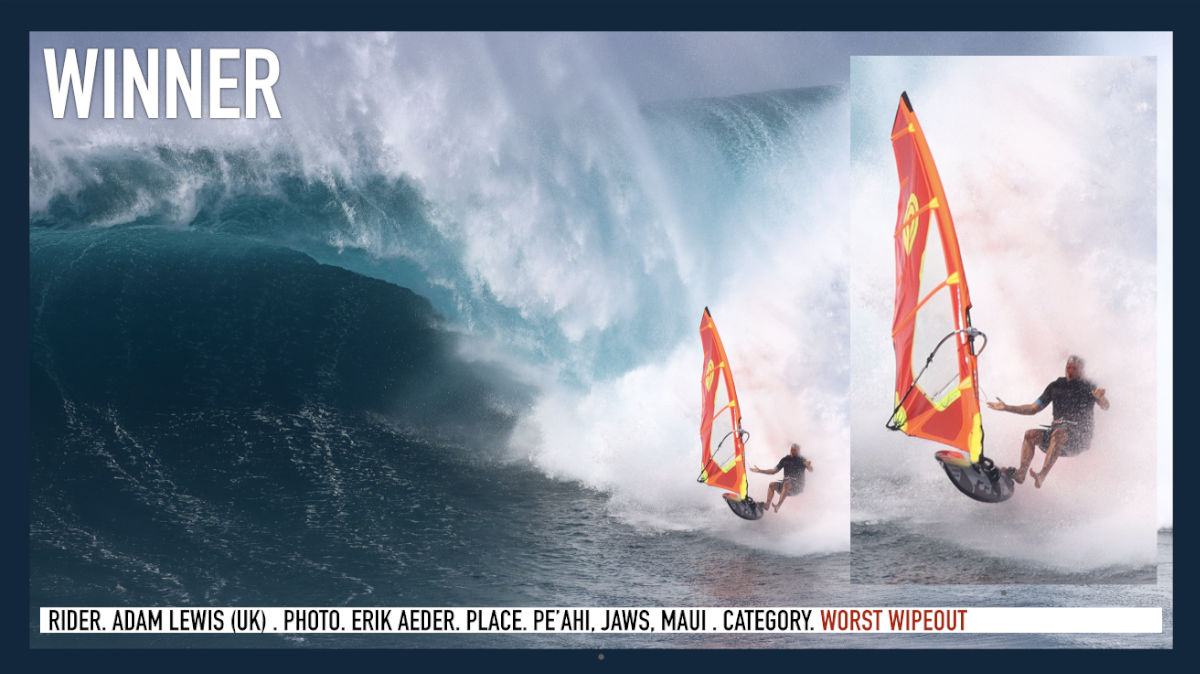 Adam Lewis (UK) – 2022 BIGGEST WIPEOUT
Adam Lewis bailed in this critical section and this photo captures his back foot still in the strap… not the way you want it to be! Thankfully the foot came out just before impact and he received his pounding without impacting the gear. The best photo category is the first time this has been awarded and we’re thrilled to present it to Fish Bowl Diaries for this magnificent shot of Morgan Noireaux flying high as the bowl closes out in Pe’ahi. This shot shows why the place has been named JAWS by modern riders! The wave can be seen wrapping around the deep reef below as it’s ‘jaws’ close on the rider… THAT’s power.
Fish Bowl Diaries (CPR) – 2022 BEST BIG WAVE PHOTO 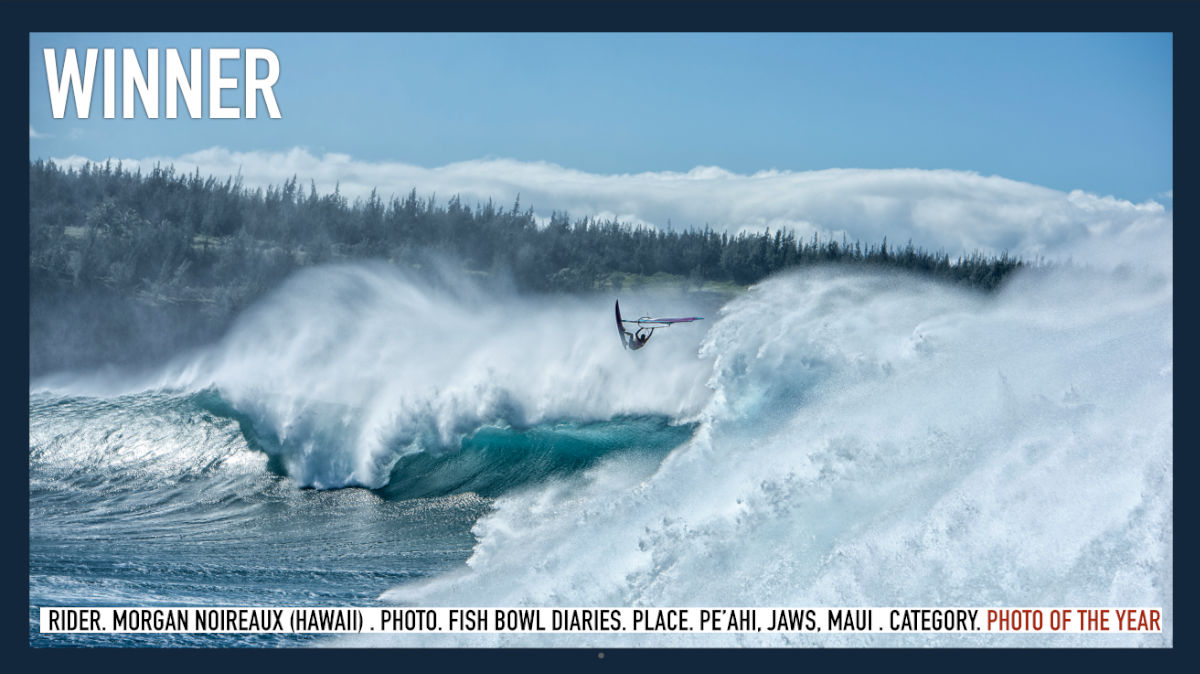 Special guests included Fred Haywood who was presented with a lifetime achievement award from the IWT for being the inspiration for these awards. His giant wave ride back in 1984 at Ho’okipa Beach on Maui’s north shore was captured by Arnaud de Rosney and went global viral in a time when that just didn;didn’t happen. It sent such massive shock waves around the world with it’s colossal size and audacious rider that it ended up in no less that TIME Magazine. Fred was also the first to break the world water speed record 30 knot barrier and kept breaking speed records for years to come. Before that he was a legendary winner on the swim team with Mark Spitz. ON top of that he was one of the early surfers to reach G-Land deep in Indonesia in the early 1970’s. Fred is a legend, an inspiration, and a great man who has brought aloha to all he does and certainly to all of our windsurfing community. We were proud to honour him on the night. His dear friend Jimmy Lewis presented the Lifetime Award. His friends and family flew in from all over the world to surprise him.

The Duke Foundation presented the first on an annual college scholarship form the IWT in Fred’s name.

Fred has written a book about his life called Racing With Aloha. It’s a great read. 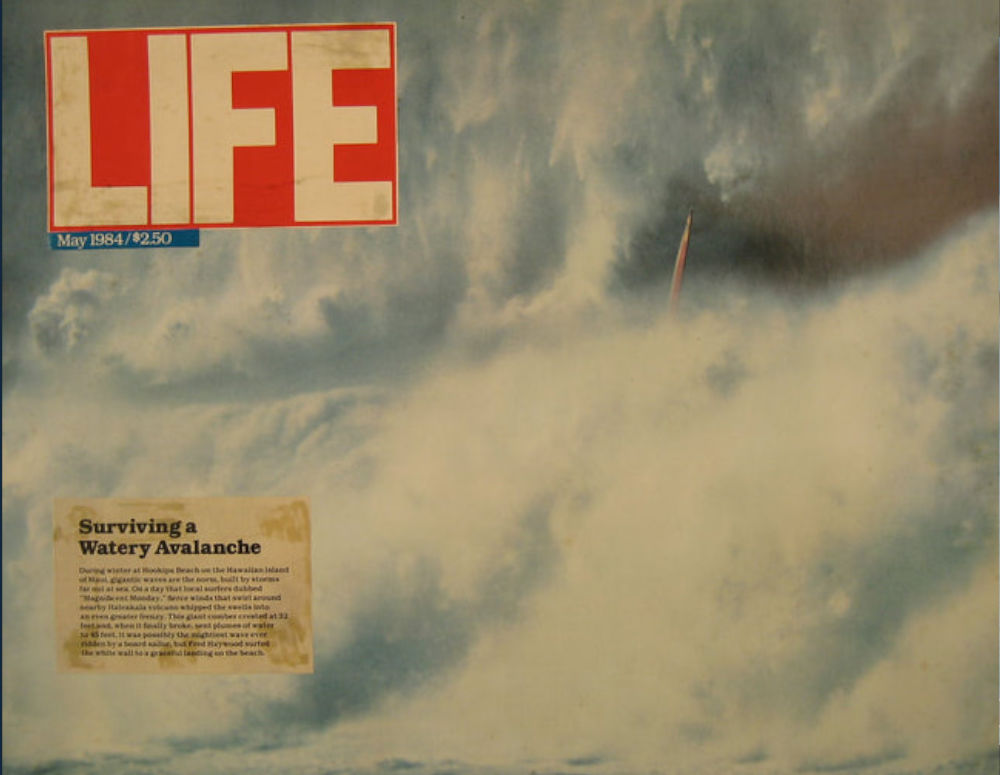 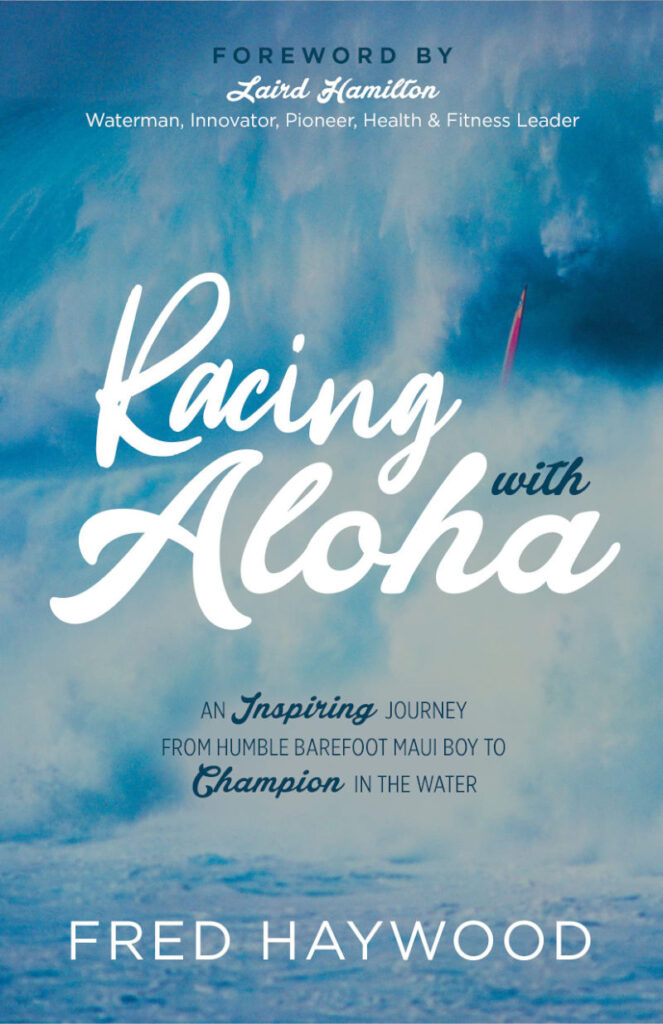 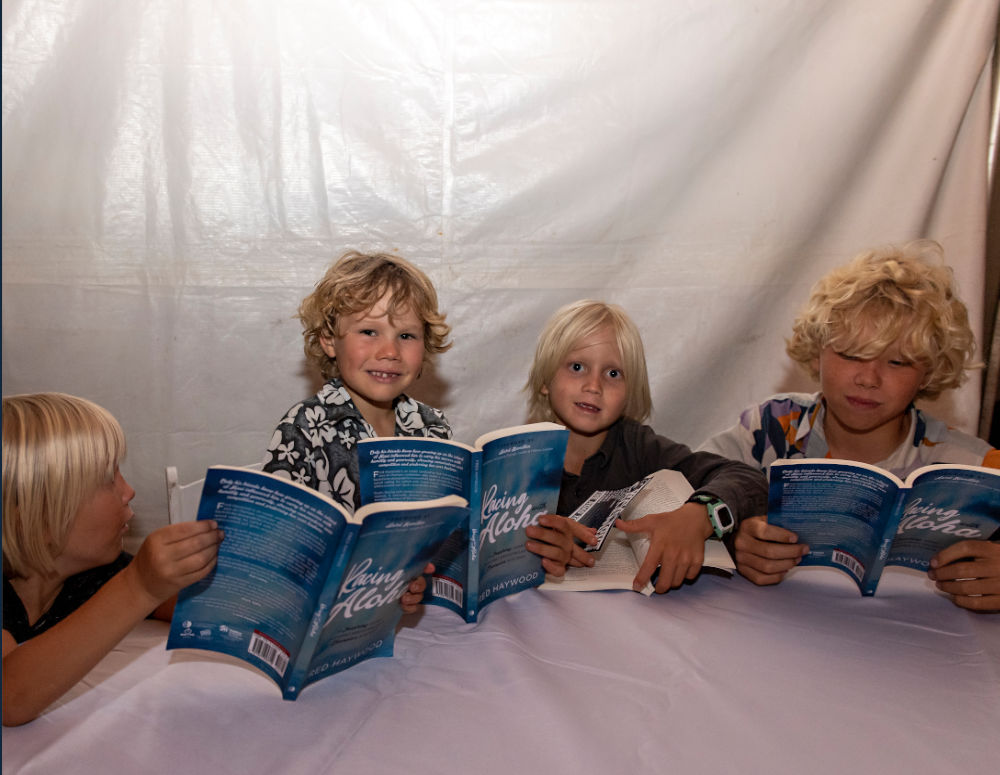 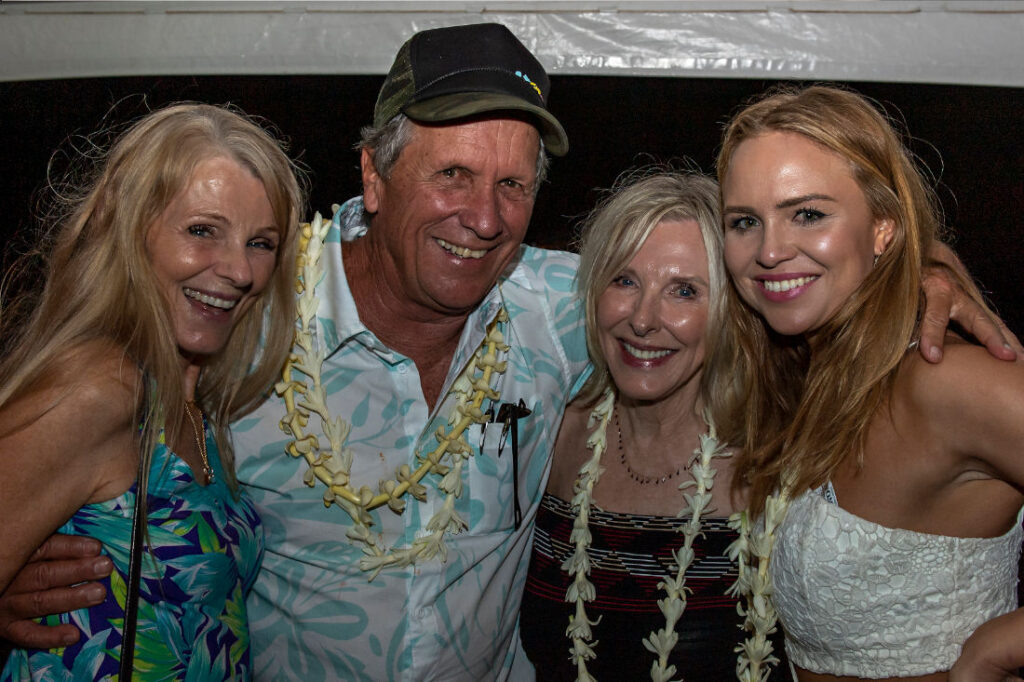 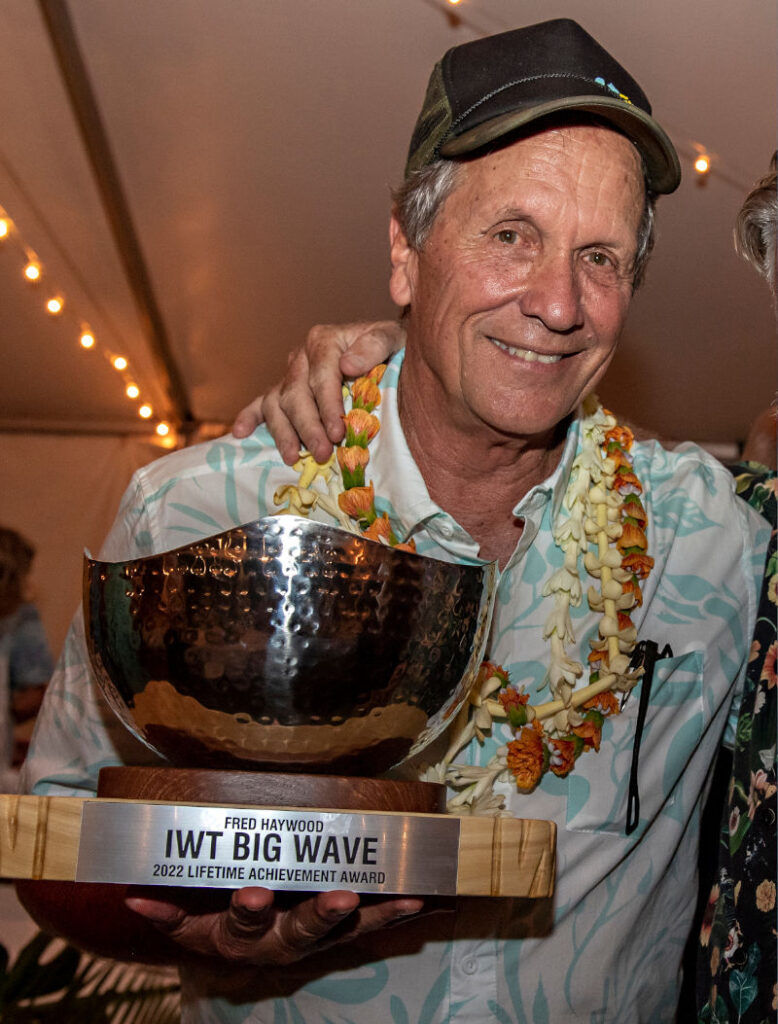 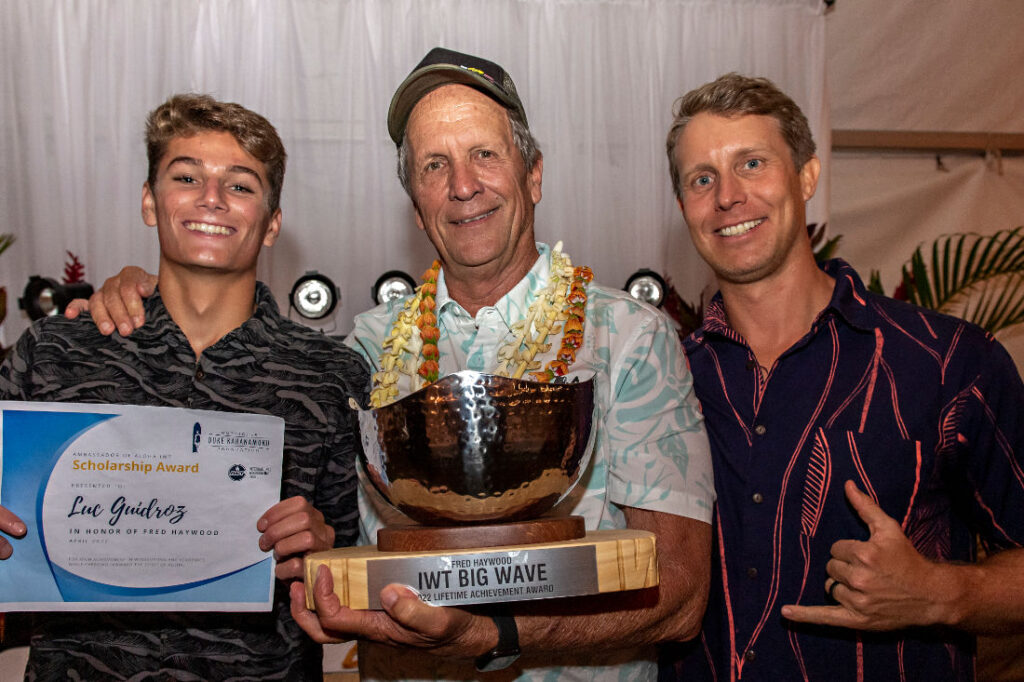 Thanks to Fish Bowl Diaries for all photos of the night
Thank you to Maui Jim sunglasses for the beautiful prizes.
Special Thanks to IWT co-founder Sam Bitner-Wilson for organising the stunning evening.

Thank you to the DUKE Kahanamoku Foundation for partnering with the IWT Wave Tour. Thank you to Auntie Leona Bak Nomura for representing the Hawaiian people and culture.