The world watched and Ho’okipa delivered

The day started early with the opening ceremony at 9am which was streamed LIVE to the world via the AWT and PWA sites. The thought provoking Hawaiian blessing asked for wind and waves and almost immediately the breeze started to build, ruffling the head high surf. It was amazing to have riders from all over the world come together during this spiritual moment at the home of windsurfing. 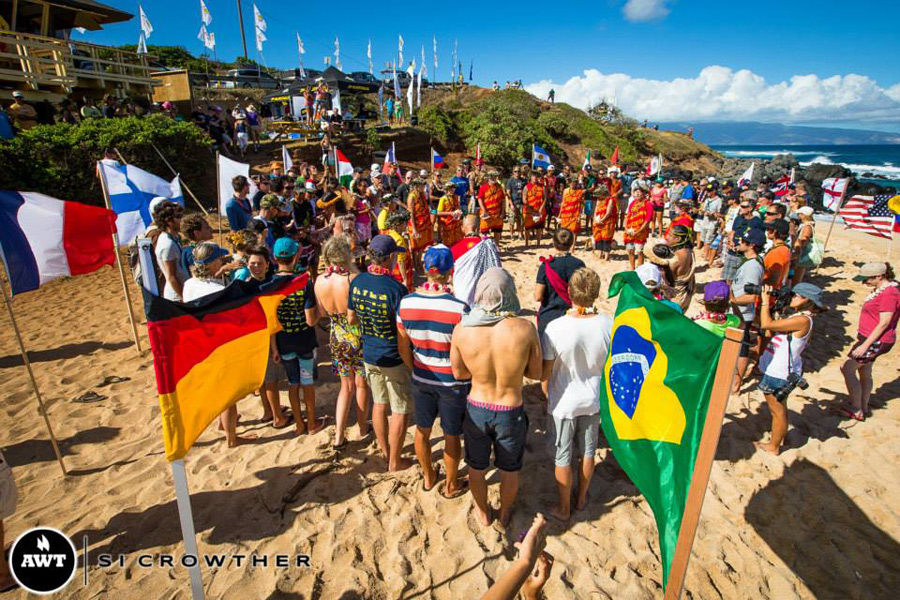 With the competition now officially open, Head Judge Duncan Coombs, decided to run straight into the AWT Pro fleet with the first 16 heats in Round #1 while keeping the option to run all fleets later. It was not long before it was clear that the combinations of fun conditions and motivated riders was delivering and it was decided to continue with Round 2 and heats 17 through 24. 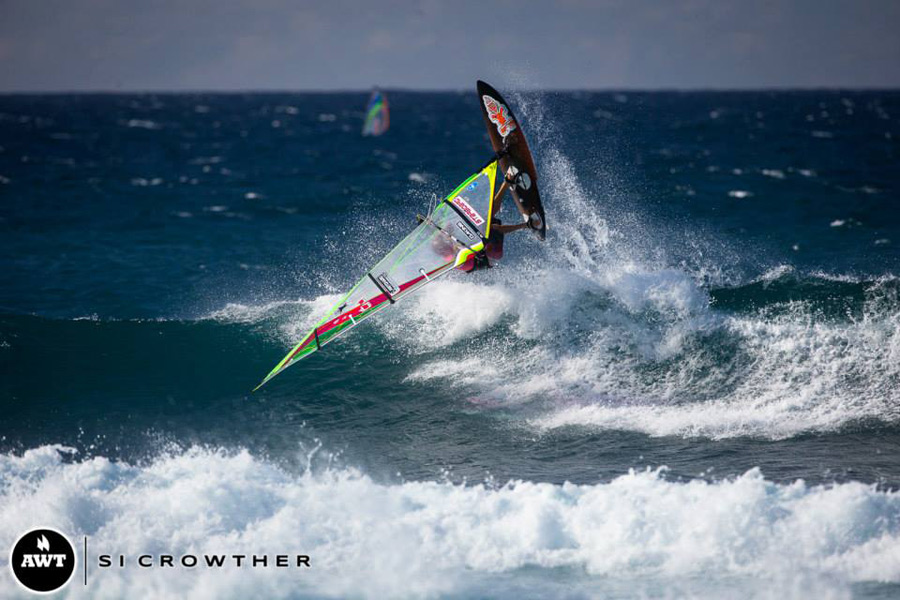 The first of a number of interesting family rivalries started with Heat #1 which was to be an all Pritchard affair. Kevin goes into this event ranked 2nd on the AWT Tour and with a confirmed wildcard into the PWA bracket, he has been battling illness these past few days but you would not know it from watching him sail. With powerful moves and a clean big areal you would expect him to cruise through but older brother Matt was in no mood to lie down and his combination of powerful turns, aggression and style saw him narrowly take the heat and force Kevin into Round #2 where riders who did not win in Round #1 go head to head to win the right to advance.

Camile Juban came into the Tour finals already having wrapped up the overall Pro title for the second year in succession, looking relaxed on the water he found the most critical seconds and demonstrated to the watching crowd and online viewers why he could go all the way and claim both AWT and PWA glory in this event. 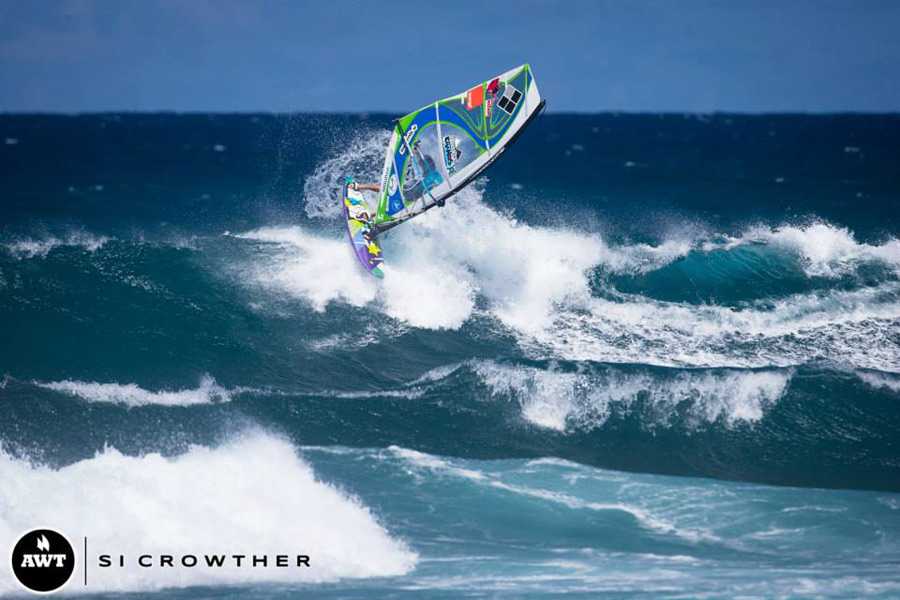 Heat #22 saw 15 yr old Harley Stone (son of Josh) face his Uncle Jason, and while the older Stone put together some impressive rides, it was not good enough to take down the youngster. Family bragging rights go to Harley, who had narrowly missed out on winning his first heat. The youngest competitor in the Pro fleet now faces Miller, Hauser & Loffreda in Heat #30 when competition resumes. With Josh advancing through Heat #23, we now have the possibility of a father-son semi final if they both make it through! 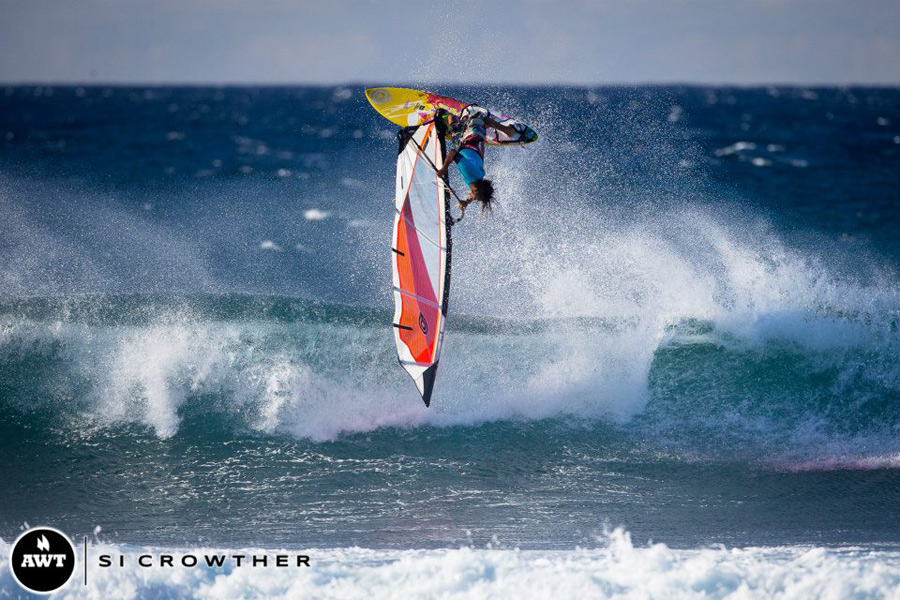 As the first 24 Men’s heats had been completed, the women took center stage with riders old and new excited to battle for the prestigious Aloha Classic title. Unfortunately, the wind began to fade and the day was called to a close after only three heats. However, Junko, Shawna and Sarah had already stomped their mark on the bracket with aggression, commitment and fluid style. Heat #4 which featured top seed and three time AWT Women’s Tour champion had to be cancelled as the wind faded and the surfers began to swarm. 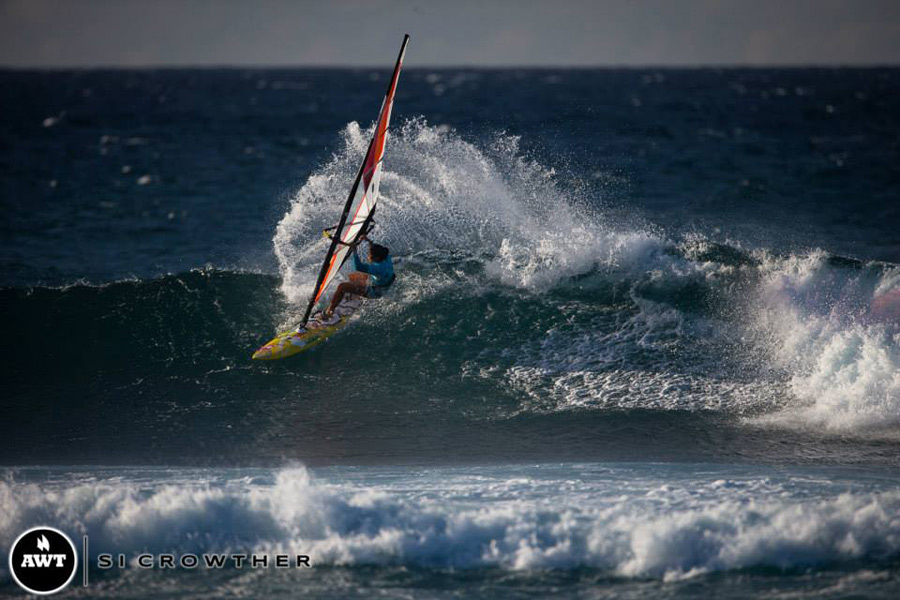 It might be an interesting time to give more insight into what the judges are looking for so you can watch at home and make sense of the scoring.

AWT Judging philosophy: “Impress us with your wave selection, timing, tightness of turns, projections off the lip and flow that connects you to the wave. You are starting with a blank canvas, so be creative. The most important thing is the art of surfing on the wave with a sail.” AWT

Despite Camile’s clear prowess there are a number of contenders for this title none more so than Graham Ezzy who scored the highest wave tally of the day with a large, perfectly timed and clean goiter off a powerful section at the Point, we caught up with him to hear his thoughts on the day;

“Today was a good warm up – fun-size Ho’okipa. I’ve spent the last 16 or so months away from the stress of competition to focus on my wave sailing here on Maui and all over the globe. Only this year did I really ‘find’ my style, a unique mindset and bodyset in approaching waves and riding them. After such a long absence, competing feels fresh to me, and I love Ho’okipa, my home. The forecast looks good for next week, and this year’s Aloha Classic has a particularly strong group of competitors. I feel excited as both a competitor and a spectator of my favorite sport. Advancing heats requires focus and luck. Wish me luck. : )” Graham Ezzy (Ezzy Sails, Quatro Boards & K4 Fins)

There is much more to the Aloha Classic and AWT than watching pro riders bust out all the moves. All divisions form an important and integral part in the competition. Later in the holding period, the focus will turn to the Amateur fleet. Ruben Lemmens (currently ranked 3rd in the race for the 2013 Amateur title) gave us these comments;

“Seeing the conditions pick up throughout the day, with the pros pushing each other and showing us how it’s done, was exciting. If the conditions stay consistent, the contest will be another AWT success and that makes me excited to compete for the am title.” 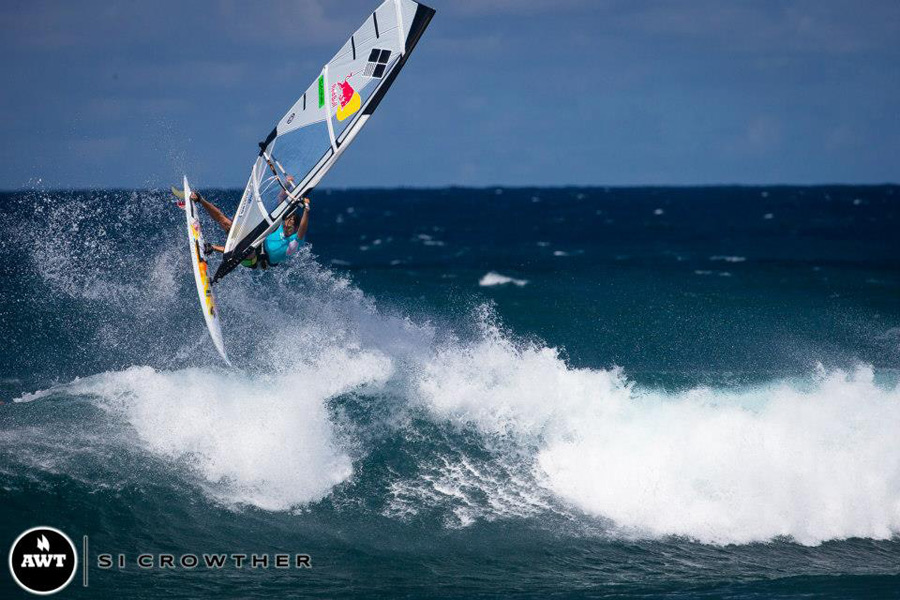 The AWT cannot happen without the numerous sponsors and the special thanks of the day goes to Mamas Fish House who provided all staff and rider leis for todays Hawaiian blessing, if you are looking for that special dinner location overlooking the sea then be sure to make a trip to their restaurant part of your stay on Maui.

In the last few days we have confirmed the AWT dates for 2014 including our return to Peru.

“The good news is that Friday is also looking like a sailing day although what little swell there is will be fading. With all the optimism I can muster I still can’t see the weekend as possible competition days. The wind is down a bit for Monday but Tuesday and Wednesday still look promising. More swell is coming but exactly when is of much debate, currently looking like swell might peak in the night Monday but should be good for a few days. There is another large swell hinted at for later in the week so let’s just cross our fingers.” 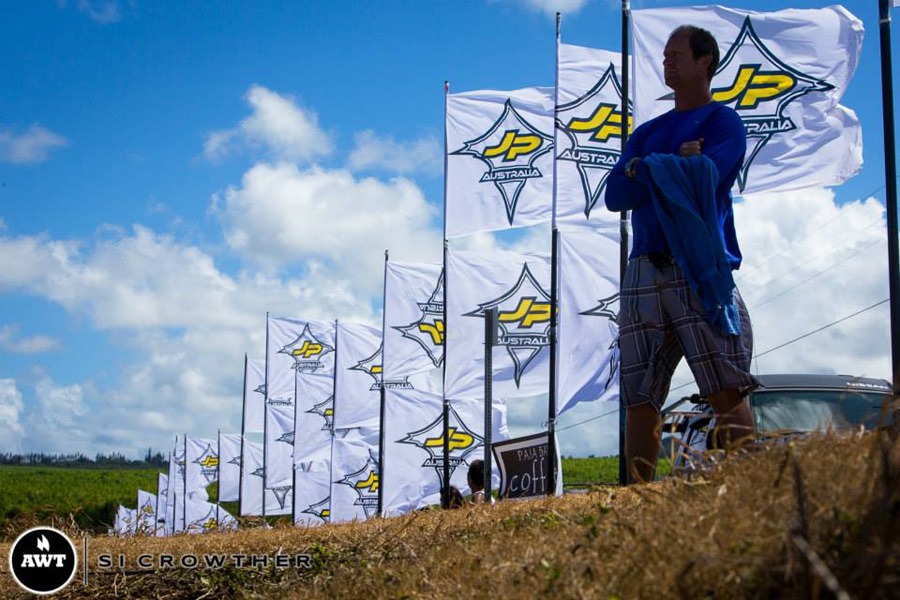 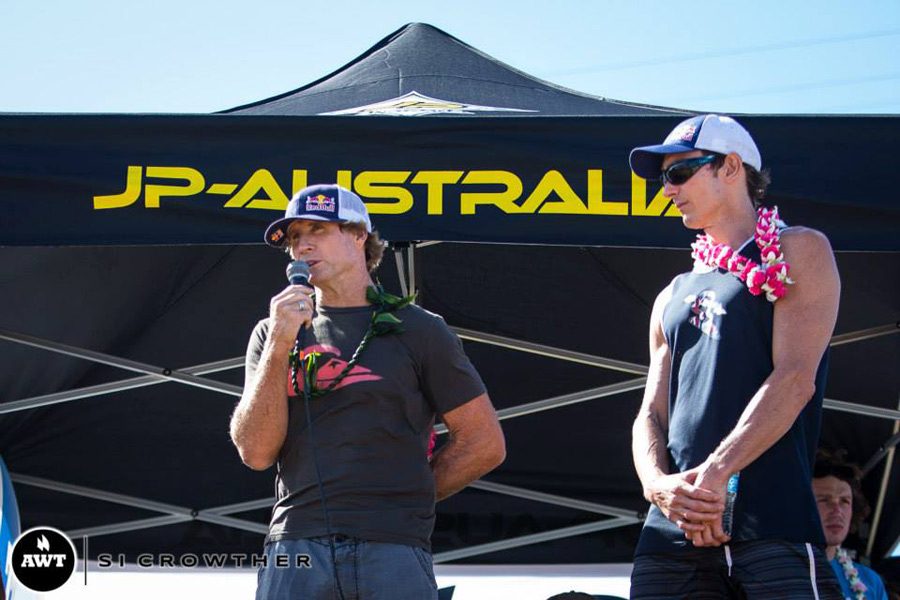 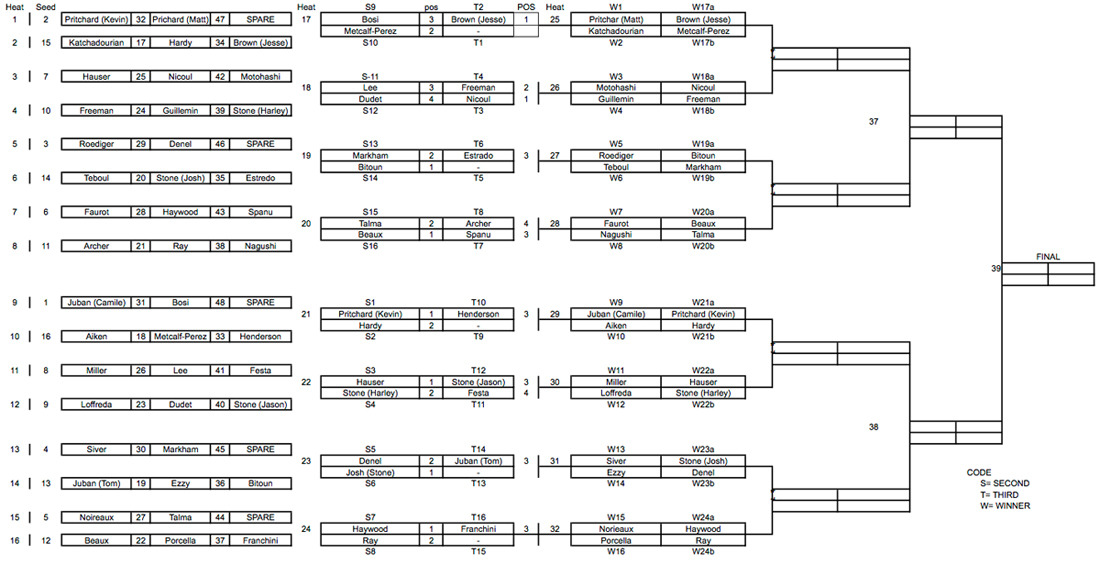