30 YEARS OF THE ALOHA CLASSIC: A HISTORY AND PHILOSOPHY

The Aloha Classic is the longest existing windsurfing wave event (together with Sylt in Germany). 2014 marks 30 years since the very first event and the 25th edition of the Aloha Classic.

Let me rewind back to when I was a young journalist, following the evolution of windsurfing, back then windsurfing was called ‘the fastest growing sport’…

Maui in 1984 was becoming the Mecca of windsurfing and Hookipa the beach the place where waveriding really happened. A few years before Mike Waltze, Fred Haywood and BK (Bill King) started the Maui Grand Prix the first wave contest in the sport, which was dominated by Mike Waltze and Matt Schweitzer.
Then, their busboy and flagman Paul Ehman decided to detach from his boss and to go ahead on his own with a new contest: The Aloha Classic.

The philosophy of the event was very simple: Aloha spirit on land, in an amateur atmosphere, great waves to be ride on water with a sportmanship manner. Alex Aguera, the newcomer kid from Florida, was the first winner that year.

1986 was the first time that Robby Naish won in Hookipa and people will also remember that edition for the first 360° rotation presented in a wave contest – the ‘cheese roll’ by Cesare Cantagalli. Before that the only jumps scored were high jumps, long jumps and some tabletops!

As the years go by the Aloha Classic became more and more serious, with higher prize money and more recognition for the champions. Naish, Cabrinha, Aguera and the superstars of the PBA World Cup had to fight with the ‘local boys’ for supremacy.

In 1987 it was wonder boy Mark Angulo that surprised the audience with his gu screws and ran away with the trophy and the lei on his neck.
In 1990 his buddy Rush Randle took the crown; he had the power, the class and the style.
In 1991 Ian Boyd one of the ‘Kihei kids’ was the local teenager to steal it to the pros.
Meanwhile, the PBA tour was growing and they started to include the Aloha Classic as the final leg of their long world tour. 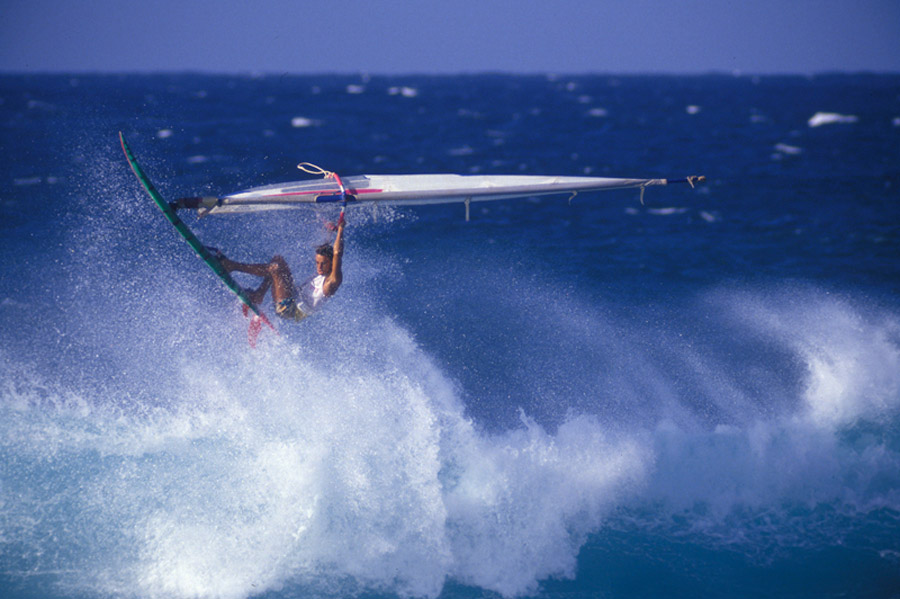 There was not only a wave competition at the Peter Stuyvesant Aloha Classic, but also slalom and course racing. Bjorn Dunkerbeck the blond kid from the Canary Islands initiated his World Cup dominance in all disciplines at the Aloha Classic, but it was still Robby Naish that took the wave title.

In 1992 the newcomers had to win at Hookipa to become superstars, the media and tourists packing into Hookipa like never before. The event was televised worldwide and the incredible pictures graced magazines for a whole year.

In 1993 a new phenomenon arrived from Australia. His name was Jason Polakow. Jason was, and still is, a super surfer and super guy with an awesome spirit. He cleaned the pack and to celebrate his happy father Nick rented the all ‘Wunder Bar’ (now Flat Bread) in Paia for one of the most amazing wild parties of the Aloha Classic. It was Jason’s 21st year birthday party so he could have his first drink and two girls on his side. And he did…

Whatever was going on at the other waves around the world during the season, people knew the last stage of the season, the Aloha Classic, would determine the best riders in the world.
‘Maui no ka oi’…that statement became a password way before the Internet.

The history of the now PWA Aloha Classic was written by three guys in the nineties: Jason Polakow, Robby Naish, but most of all, Bjorn ‘The Terminator’ Dunkerbeck. Epic fights, unbelievable rides, historical new jumps, new maneuvers and loops, plus new party locations enriched the book of the Aloha Classic until the end of the new Millennium.
Then 2000 arrived and I moved to Maui with the family.

The Swatch Aloha Classic was the most touching edition I remember, because I ended up crying with joy; this had never happen to me before. The joy was for seeing one of the most devoted and honest riders, Francisco Goya, conquering his wave world title after ten year of sacrifices to reach the top.
The joy was to see my son Francisco winning the trials and entering the main contest at 14-years-old. The joy was to see Kevin Pritchard, the first true American to win the overall PWA World Title after two decades of Naish/Dunkerbeck dominance. 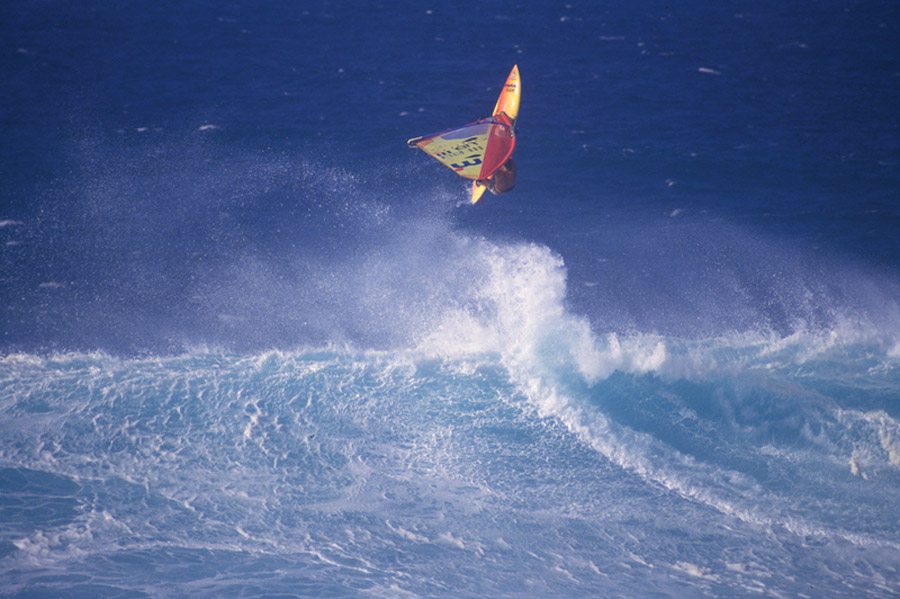 In 2001 finances and sponsorships dropped down, the PWA left and Dominican Tony Garcia won a slow edition with no wind, no flags and almost no people.
Paul Ehman, after 18 editions, decided to cancel the event and for two long winters the wave contests, the pros, and the Aloha Classic were not on Maui anymore.

How sad. We could not stand it.

I finally decided to bring it back in 2004, starting from the roots; an amateur event with age groups and the old ‘windsurfer spirit’.
For the first time in wave events we launched the ‘junior’ and the ‘kids’ division.
The 19th Aloha Classic can be remembered for that ‘kids’ division and the family spirit supporting that. Most of them come from a noble name in sport.
It was the first time in competition for people that are now dominating the watersports

Kai Lenny, who was 12 back then, won in the kids. Behind him were: Zane Schweitzer, Connor Baxter, Spencer Haywood, Hunt and Kerbox.

Anders Bringdal won the master division, in front of Alex Aguera.
The blessing of those days came from a monk seal, called Makana, that landed on the beach the opening day and left the last day and we had to go around her, sending a kiss before touching the water.

In 2005 Mark Lefebvre who also brought the PWA back into the picture ran the 20th edition of the Aloha Classic. Josh Angulo took the top spot on the podium, 17 years after his big brother. But the pro competition didn’t last long; it was just too costly to be kept alive.
Back to null for another four years until St. Sam Bittner took it by hand with her American Windsurfing Tour.

With her grace and professionalism lots of good things of the Aloha Classic have come back. The event first of all, the name – The Aloha Classic – and the original windsurfer spirit (50% fair competition 50% serious fun in the evening).

There is also the age group format to give all the amateurs a proper group, from juniors to grand masters.
The PWA and the pros have been back since last year, choosing the Aloha Classic as the final stage of the World Tour.
The touching moment that lived with Goya in 2000 was back last year when Levi Siver was finally the king of Hookipa after a decade of attempts.
The monk seal was also back to bless us.
Even another seal, the ‘talking Seeler’ was back with me on the mic entertaining (or annoying) the public. What else?

Thirty years later, the Hookipa wave theatre re-opens its doors to another powerful edition of the Aloha Classic. The American Windsurfing Tour with their joyful age groups of amateurs and the PWA World Cup with their selected pros will be melting together for another long battle that will make history again and keep the same well established philosophy alive.