On day two here in Pacasmayo the conditions dawned with
4.5 to 5.0 wind and over head high sets so it was on!

After a big welcome from IWT Director Sam Bittner and 10am briefing at the El Faro Resort in English and Spanish the competitors were primed and ready to hit the water for the first rounds of our Amateurs, Women, Youth and Masters divisions. 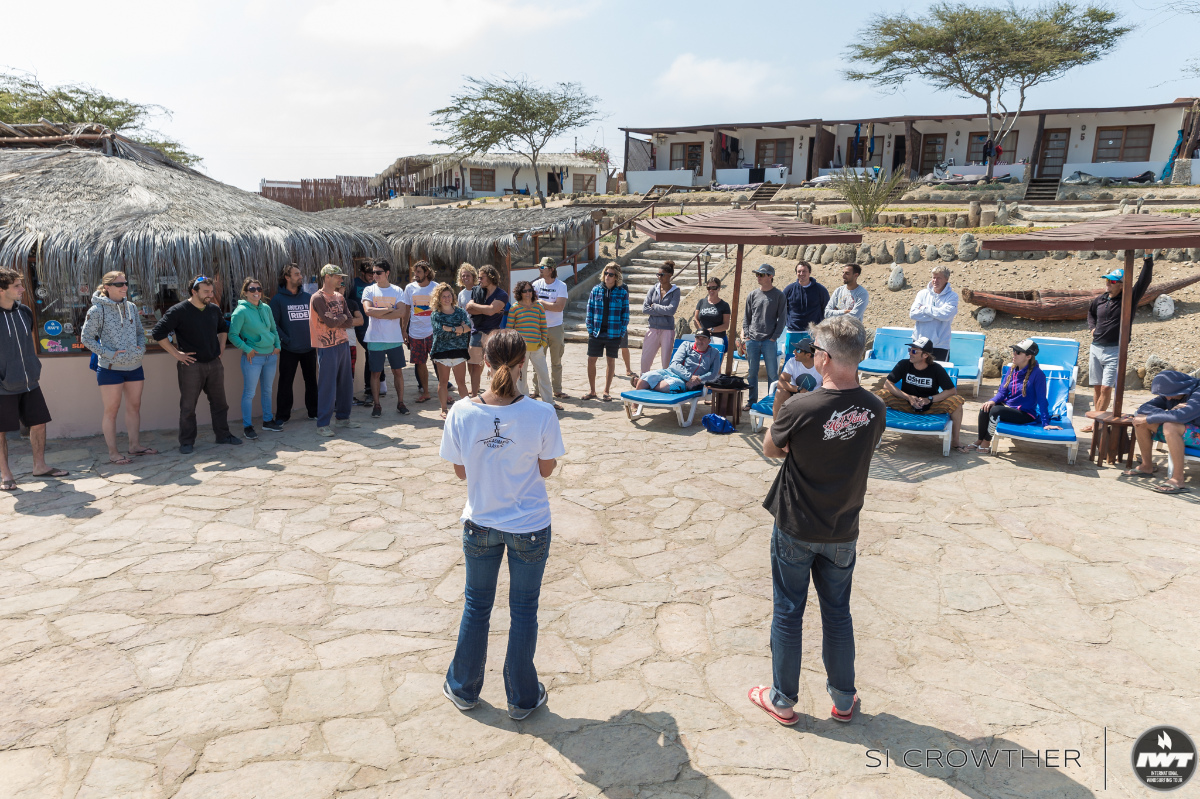 We set up our mobile judging HQ in the dunes about 400m downwind from the point to get the best views of the best waves of the day. Once the judges were set up, local event organizer and owner of El Faro Resort Jaime Rojas turned on his massive music system from the back of a battered old tuk tuk and the place BURST into life! 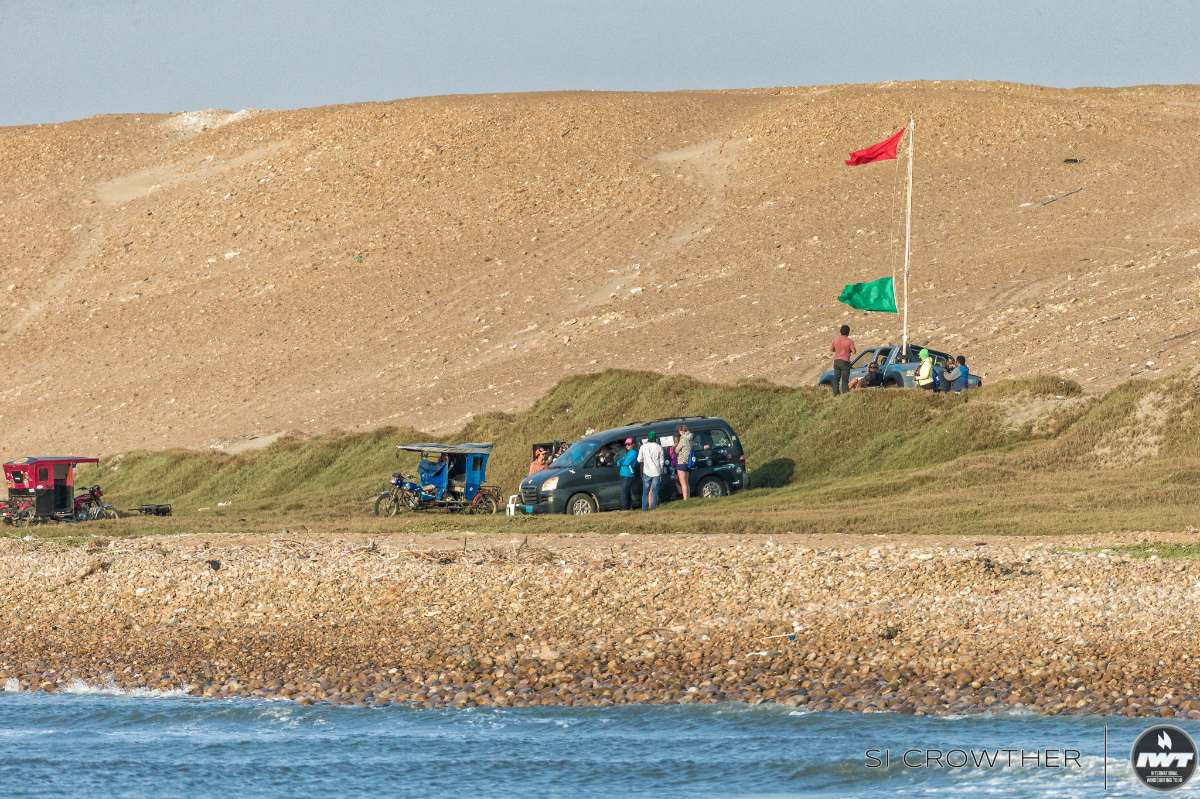 First out were the Amateurs in round one. One of our overall tour leaders Tom Soltysiak from Canada had a set wave and showed his strong flowing style but the talented Chilean youth Joaquin Desriviers pushed just a little bit harder and went more vertical for an impressive performance and took the win. Both sailors advancing to round 3. Omar Castro from Colombia and Jason Hale from Australia couldn’t match them on the day and will now fight their way back into the game from the repechage in round 2. 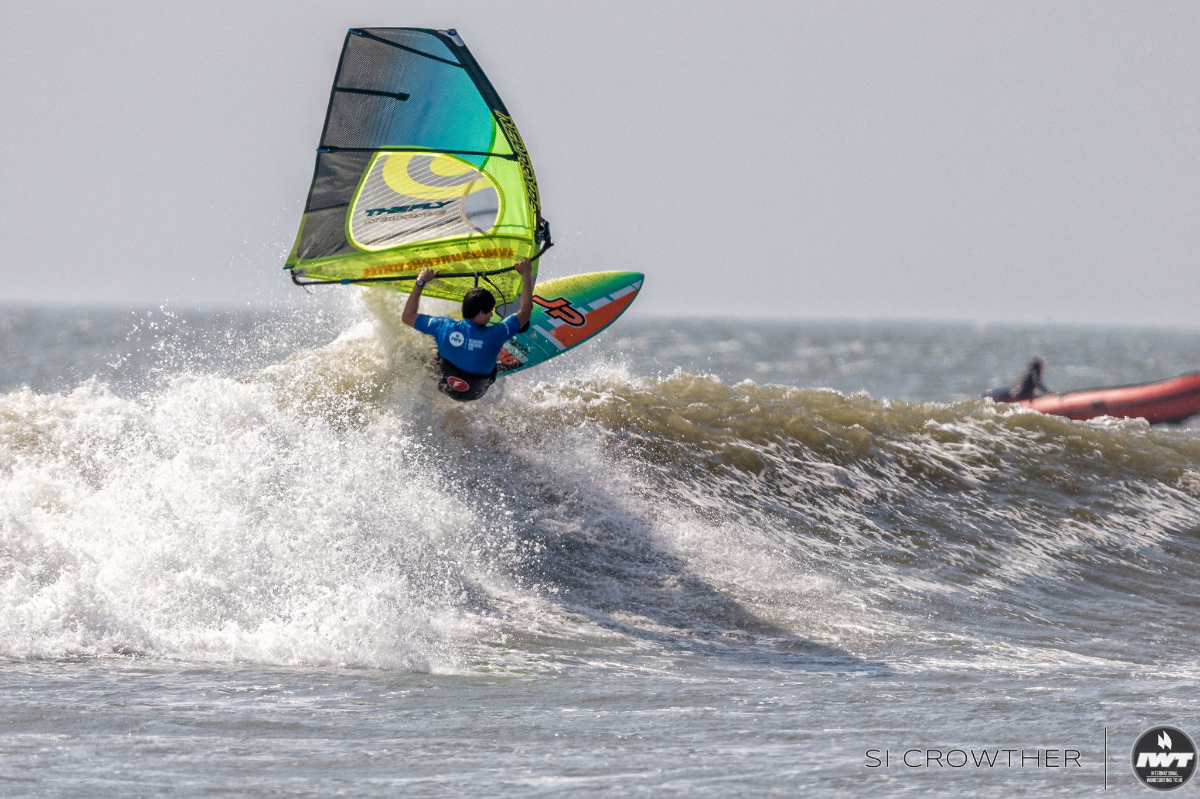 Next up we had local Peruvian hero William Perez show his aggressive top turn hacks. Perez came out just on top after going wave for wave with Boris Van Cauteren (Belgium) and Perter Kimball (US). Perez and Van Cauteren advance to round 3. Kimball and Alejandro head to the repechage.

In the 3rd Amateur heat head judge Simeon Glasson went up against Christian Lavelli (Italy), Ferdinando Ramirez (Spain) and Roberto Carrasco (Chile). It was a close run heat with lots of waves, Christian picking up a couple of set waves and displaying his smooth surfing style but it went to Simeon with a 2-1 decision from the judges thanks to his more aggressive style and slightly better wave selection. Simeon and Christian advance. 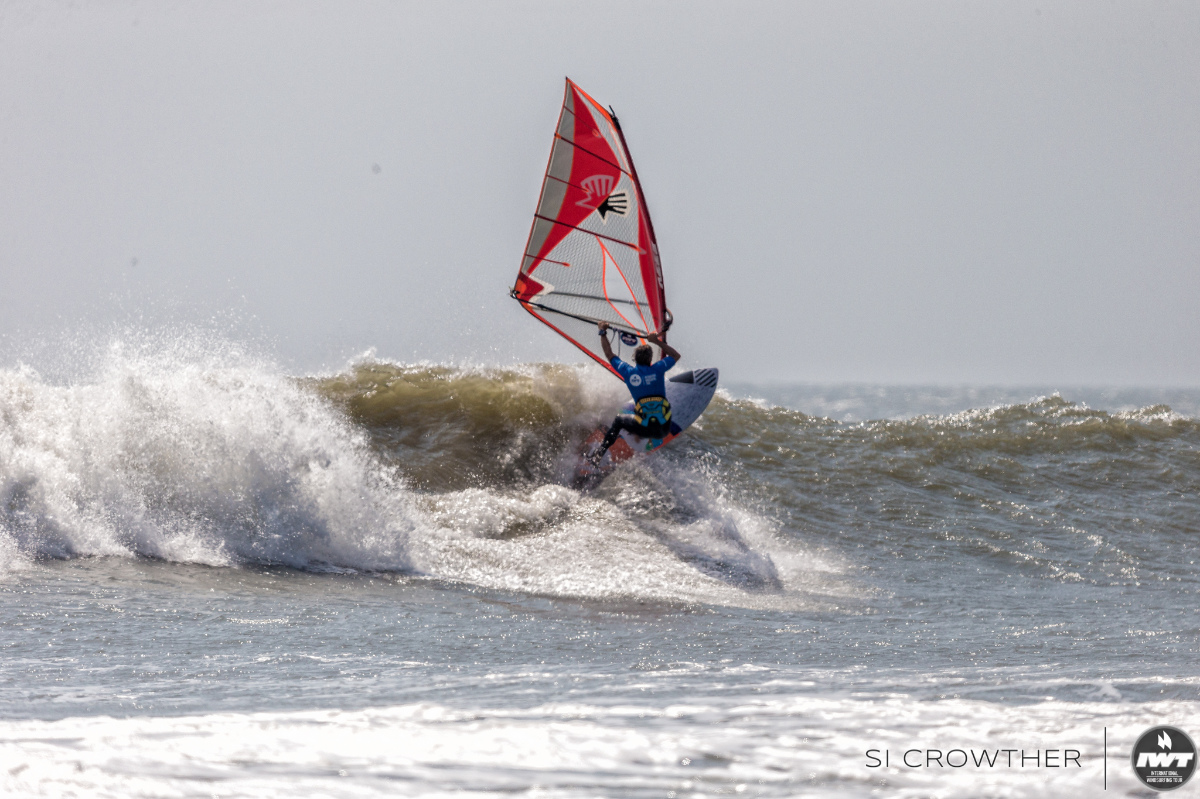 The first youth heat saw some impressive sailing from first time wave event competitor Sabine Zolla (Italy) who only started wavesailing in Tenerife one year ago but has already developed a smooth rail to rail flowing style. Smooth style wasn’t quite enough to combat the aggressive critical moves from local William Perez or Chilean Joaquin Desriviers who both had great waves. Joaquin took the top spot impressing the judges with his more vertical wave riding. 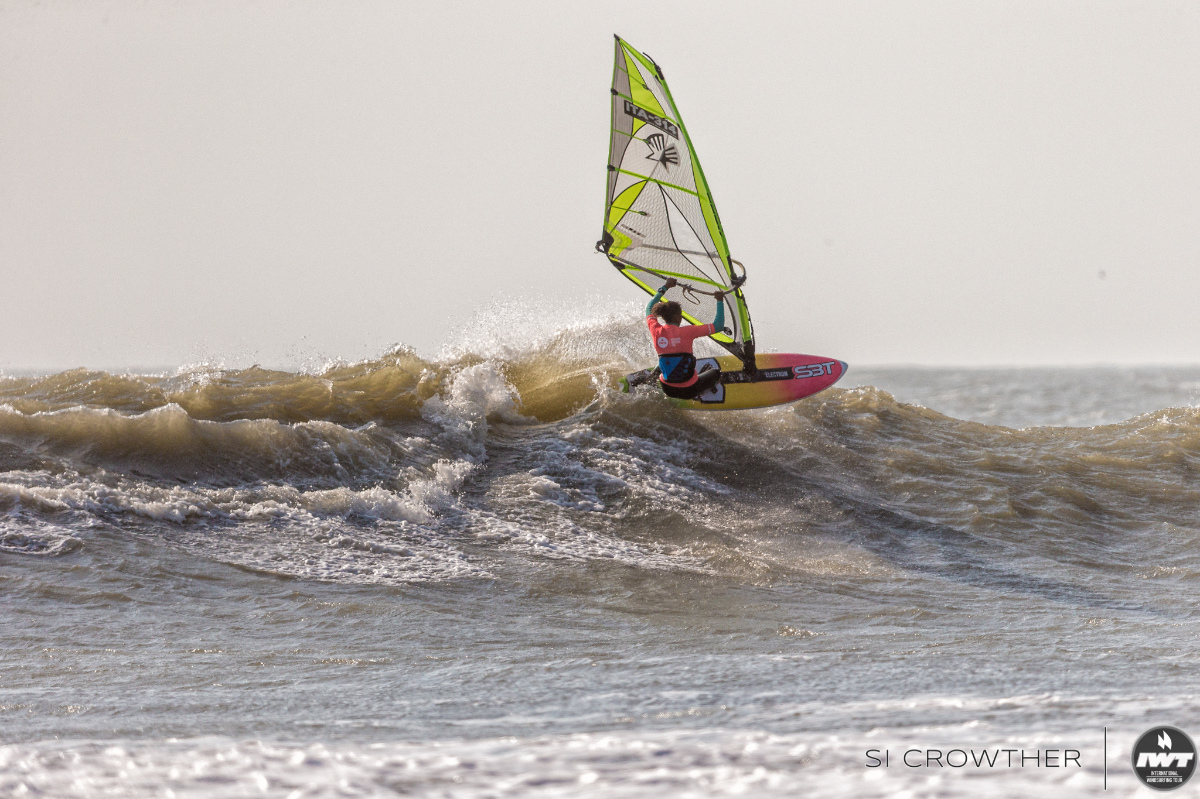 Local youth heartthrob Alessio Botteri was sidelined with an ankle injury but didn’t let that get him down and he sat in to be a judge like the good sport that he is.

After 5 long heats (22 minutes with 3 minute transitions) sitting in the fine-sand filled wind and strong sun, we had a change of judges so the UV rays didn’t fry anyone, special thanks to Chris Freeman for stepping in as acting head judge while Simeon competed.

The second half of the afternoon then kicked off to get results for the Women’s and Masters first rounds. The first women’s heat, as described by Gisela Bigliel (Switzerland) was “the killing zone!” because it had PWA sailor Maria Andres (Spain), Baja winner Annamaria Zollet (Italy), and local champion Denise Blondet (Peru). So yes, it was tough! The women’s fleet at this event is one of the largest and strongest standard fields in years. 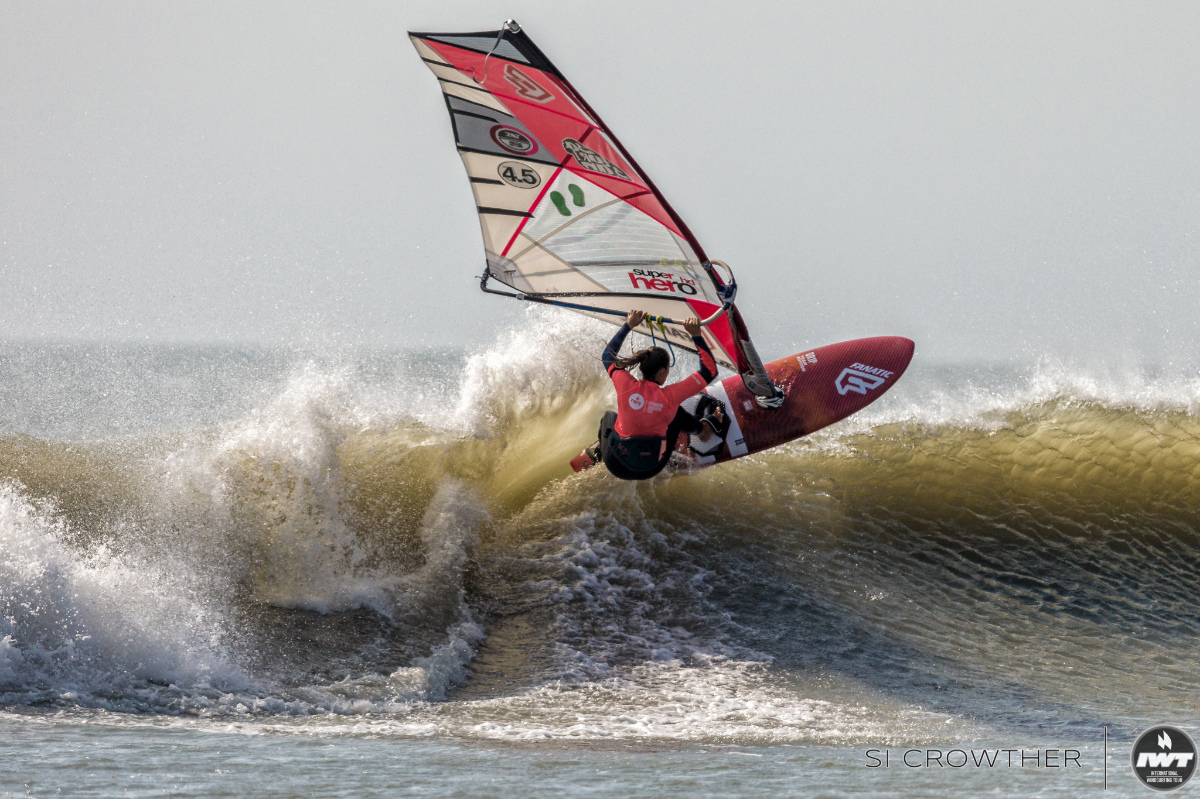 The PWA experience of Maria stood out from the start with exceptionally good wave selection combined with well timed critical hits giving her a dominant winning performance. The battle for second between Annamaria and Denise was tight but Annamaria took 2nd spot with better bottom to top turn combinations giving her and Maria a clear path to round 3.

The 3rd women’s heat saw youth Sabine Zolla take first with those smooth rail to rail transitions ahead of Bjorte Purshel (Chile) and the IWT’s own Sam Bitter (US) taking 3rd with some speedy down the line sailing.

The last two heats of the day were the two Masters first round heats, and despite suffering from a heavy cold that had him passed out on grassy the dunes for much of the afternoon, JP charged out to pick off great set waves and smooth long rides to dominate his heat ahead of Yerko Radovic (Chile) and Peter Kimball (US).

The final heat of the day saw Simeon Glasson have a surprisingly good heat scoring an amazing 9.5 for one of his first waves making it a clear run into the final to join his rival JP in the final. Raul Reiner (Chile) sailed a strong heat for 2nd and George Schobert (Germany) picked up 3rd. 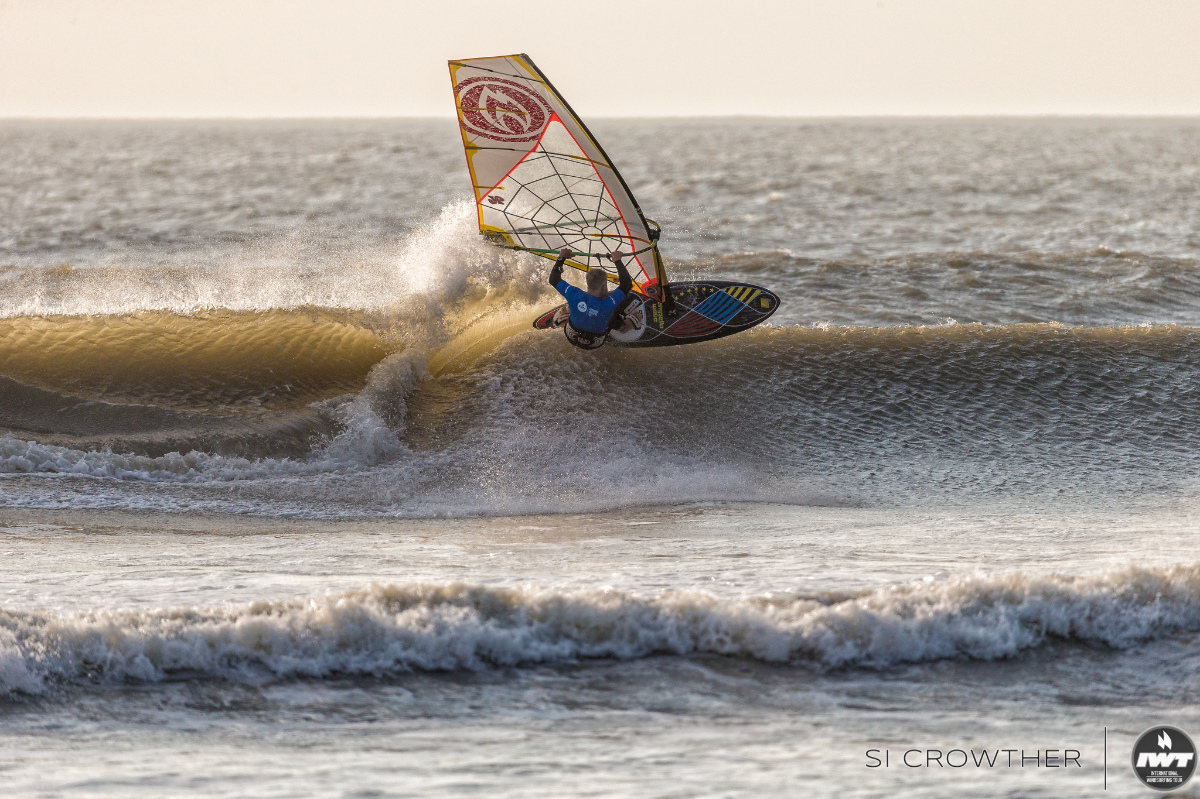 The day was a great success with smiles all round. Everyone enjoyed an evening of pisco sours, beer, ping pong, and Physio therapy for the walking wounded thanks to Melissa Yurivilca Espinoza of Fisiobio who is working wonders keeping us all fit and functional!

Text by Simeon Glasson and photos by Si Crowther