We are tired, torn, at a loss. Those who were eliminated today have lost most of their gear in horrendous crashes. The four of us remaining in the final can’t fathom our fortune. I find myself replaying the narrow misses on huge barreling sections, the brushes with reef and disaster. Making the final feels less an act of competitive prowess as much as a revelation: this is what windsurfing can feel like. Powerful, perfect and real.

The morning is still in Fiji, red windswept tendrils of cloud raise a warning of more wind to our stirring sailors. I enjoy my morning coffee and look over the massive load of content created from just a few hours of sailing, photos and videos on another level. On my screen I see the excitement of friends and family back home, and fans of the tour sharing the images. In pools of reflective and restive stillness we watch the events of the previous day ripple out, growing far past the point of their origin.

What happened yesterday was a prime culmination of conditions that created an opportunity that might have eventually come together for each rider at some point in their travels, their careers, but to have it happen at a contest meant that it happened at once for all riders in one place. A focal point of collective dreams coming true. With Fijian safety crews providing that added level of logistic ease and security, each athlete gave it everything they had, we felt limitless. Truly a once in a lifetime opportunity.

It was a moment that I saw everyone rise to. The judges, the crew, and the riders all working towards the goal of capitalizing on the best day of windsurfing in decades.

Heats were run in a kind of fervor, clock timing meant less to riders than the subtle timing between sets. We eagerly anticipated the next set. It was a countdown for the opportunity to have a life-changing ride. Making the next heat meant less to each rider than making the next section, the bowl at the end of the wave was prize enough. It was a prize that kept coming all day! Something that could be shared.

While waiting in the channel and preparing for my heat I watched Camille -who had the most experience and was quickest to get in tune with the workings of the wave- drive a deep bottom turn under the lip of a growling monster end-bowl, the section where a surfer would be perfectly positioned for a massive barrel. He deliberately drew out his turn to stall for the perfect moment, his eyes hungrily fixed on the immediate section that would be a massive hit. He brought his board up to hit that heavy lip milliseconds before it came over, he was right under the mouth of ruin, using the power of all that throwing water to loft himself into a massive air, twice the height of the barreling tube that was now far below him. With that opening ride he set the tone.

Each of us took in what Camille had just done, and set to work attempting to emulate it. Every rider had their own approach and brought their distinctive style to the same wave, the points of difference were subtle and beautiful. Robby Swift rode with a determined confidence and polish, he could’ve fooled anyone into believing he had years of experience on this wave, rather, he had minutes of experience. Nevertheless, Robby was the sailor we followed out beyond the reef into deep water, to search for sets. He managed to get himself into a massive set-wave, airing that bowl section in a way was a little less critical than Camille’s approach, but arguably more powerful and definitely more picturesque. 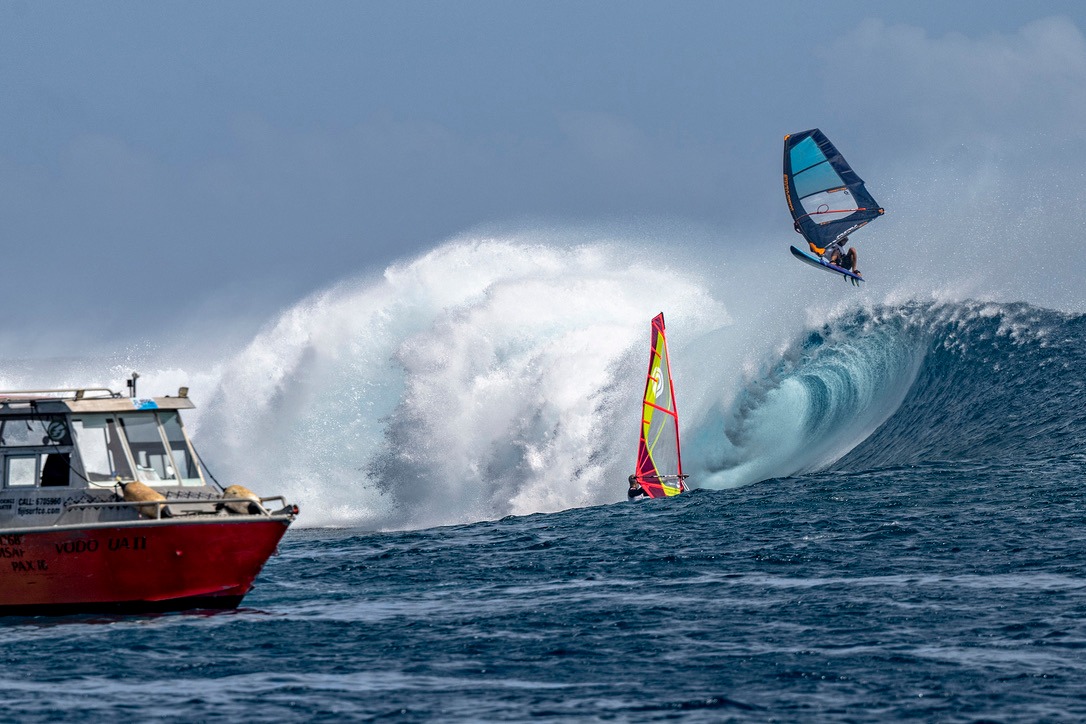 Antoine was flirting with disaster all day. And though I made it to the final over him, I felt that the top 4 seat was his to lose. In our semifinal together, he had so many shots-on-goal, spectacular waves of consequence ridden to the highest degree of commitment. I think he had the opportunity for a 10-point wave, and boosted an air that was possibly just too high to land.  Everything looked perfect in his angle of attack and the positioning of his body as he sailed above the entirety of a barreling section, some 20ft above the surface of the water, but in coming down his impact bounced his board and that moment of instability was precisely enough for Cloudbreak to pounce. Antoine lost all of his gear.

Morgan sailed most like to a surfer, which is his his “M.O.”. No one seemed to understand the wave better, what it needed and in what places to a apply it. I didn’t see a single off-beat turn from him, and the result was extremely memorable. He didn’t break a single piece of kit, a feat in and of itself for a finalist.

It’s insane how much a low tide will amp up the surf, allowing it to bare its teeth and even grow in size as if the swell is once again on the rise, and pulsing in. Cloudbreak seems to have a personality that shifts, ebbs and flows, multiple times in a day. The reading of those changes is crucial to navigating the wave as a surfer but as a windsurfer you must also read the sky. In a similar fashion to Maui, a prevailing tradewind direction provides for reliable sailing, but local rain squalls and competing sea breezes often change the attitude of the wind, amplifying it when the rains move in, then killing it as the downpour passes over the island.

As the semifinal drew to its dying minutes, so too did the wind begin to soften. At this point, Antoine had broken everything, and was languishing on the reef out of contention. Robby Swift and I held our positions in the lineup, now jockeying for the last set likely to come in this heat. As we pushed each other to reach further up the reef, lines of swell started to materialize on the horizon and we were quickly climbing waves into the heart of the set. However the wind was siphoning away, slowly, as Robby and I both made unsuccessful bids for a wave; then all at once as the last waves of the set rolled beneath us. We could barely stand and the surrounding break was still and glassy. As competitors we made a vague show of holding positions and playing priority, but we both knew we were powerless to catch anything. After another minute, Robby and I looked at each other, looked upwind, looked at our watches, and Robby shouted to me: “We’re gonna surf in like 5 minutes!”  Riders don’t waste waves. And in less than five minutes we had slogged back to our support boats, ditched windsurf gear, fished out our surfboards from beneath a mountain of gear bags and jumped back into the water. Support skis drove us into the takeoff zone. From competitors to friends, we surfed a still and breathless double-overhead Cloud break until the sun dipped below the horizon.

Everything occurred in what felt like the blink of eye. Three hours of epic windsurfing passed in a flash. What began in stillness ended in stillness, but echoes of that energy, speed and soaring height will continue to exist in our memories forever. 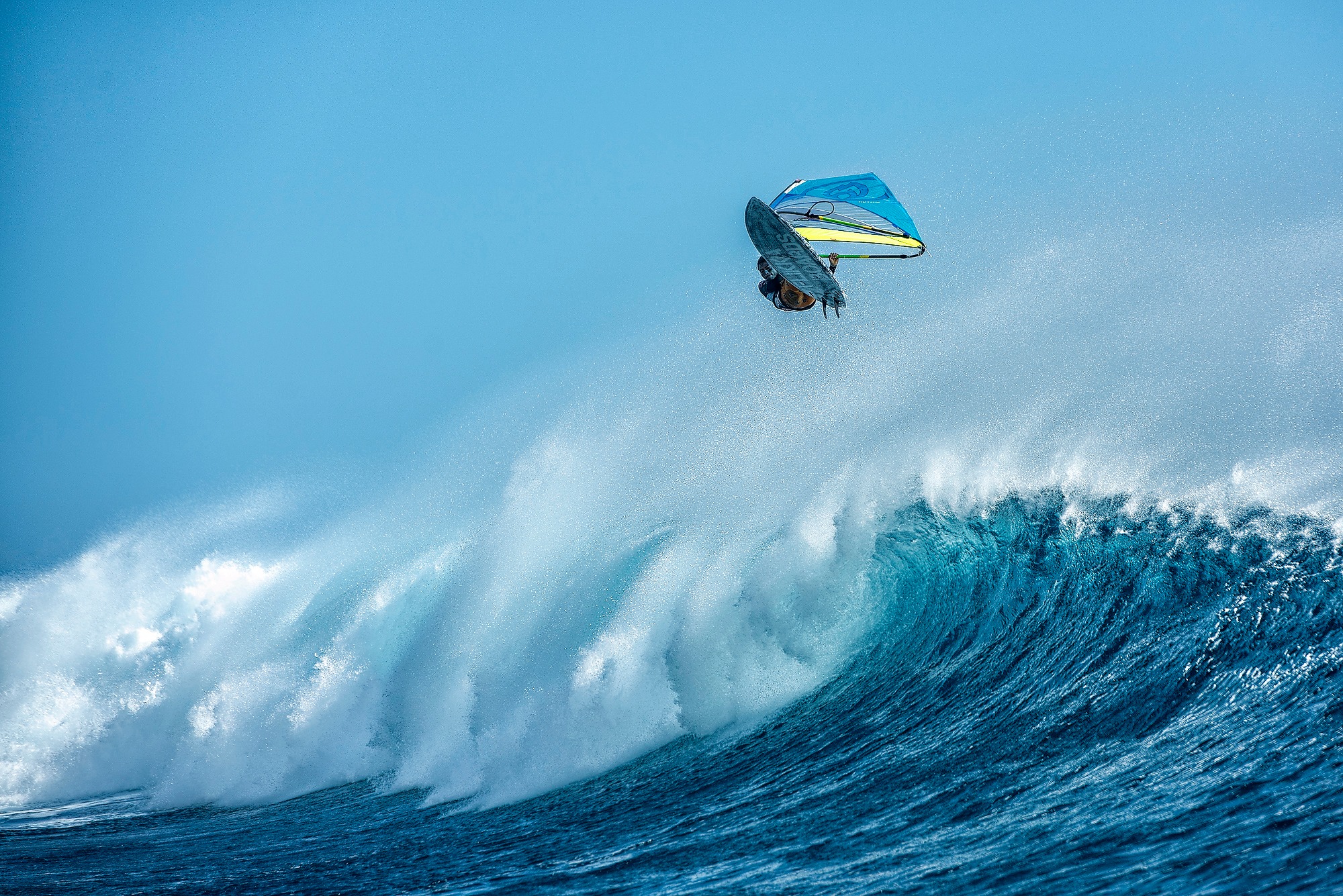 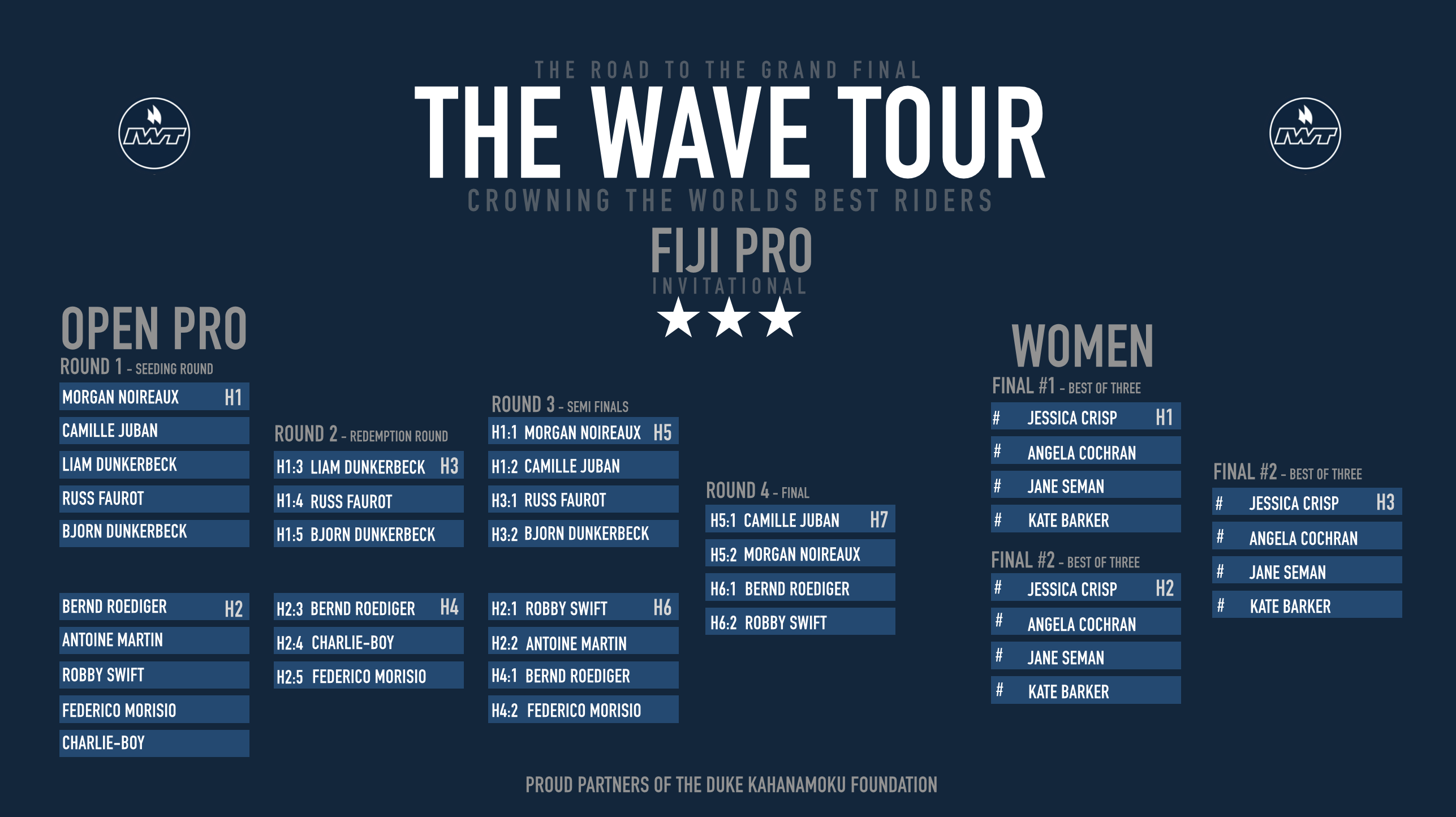