Congratulations to the 2018 Aloha Classic Champions

The five amateur divisions finals were run and won in stunning Ho’okipa conditions today. The red-hot favorites all held their nerve under the intense pressure of expectation to win their respective divisions with power and style.

The first final up was for the Grand Masters. The wind was still filling in as the finalists hit the water so it was light but the ocean was offering up some beautiful clean swells in the head-high to occasional logo-high range. It was just about perfect. Two long-time Maui locals, Jeff Henderson and Greg Aguera, had a close heat exchanging waves throughout. Henderson had been dominant all week heading toward this final, and it was no surprise to see him sailing very strongly, but he was not without his challengers. At one point, Aguera went for a great aerial and almost pulled it off, but it wasn’t to be, and with that crash he lost his one chance to surpass the in-form Henderson. Augera was forced to settle for 2nd place. Ho’okipa’s unofficial mayor, Rob Funk, sailed a great heat riding in his classic stylish way, but on this day his lip hits were no match for the more powerful styles of Henderson and Aguera. Funk took 3rd. In 4th spot was the Guadeloupe legend Martin, who struggled to catch waves in the final and was unable to show his best form that we saw in earlier heats. 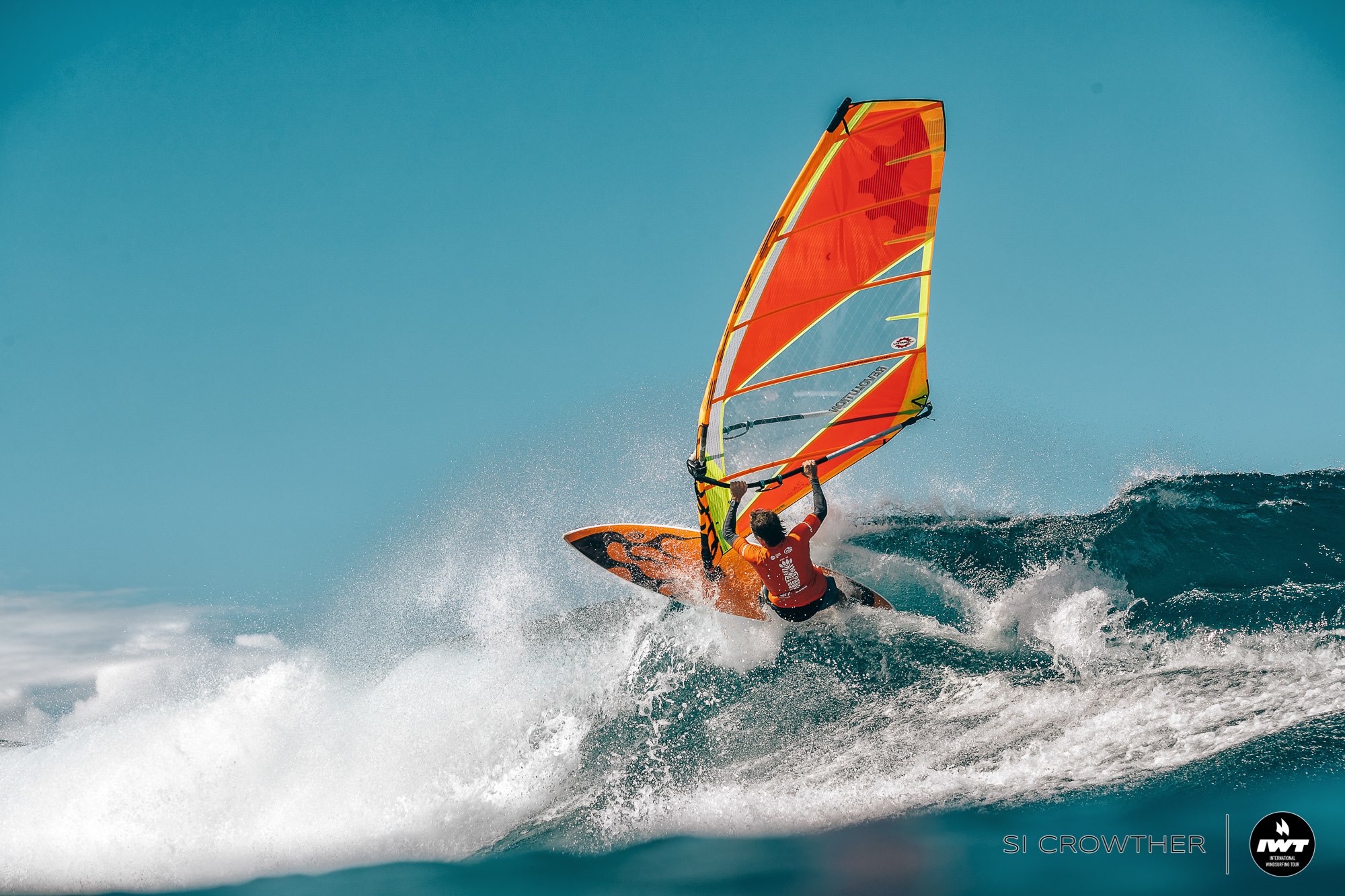 Hot on the heels of the Grand Masters, the Youth U/17 final hit the water and the action immediately heated up. There was an extraordinary run of set waves pumping through the heat, which were torn to pieces by these talented and aggressive young riders. Right out of the gate it looked like Takuma Sugi from Japan was going to dominate. This young pro fleet rider had wave selection that was second to none, and his aggressive lip hits and daring late hit aerials lifted him above his rivals for a solid win. The young Italian, Nicolò Spanu, sailed a high-energy and aggressive heat to claim 2nd ahead of the two young gun local boys, Luc Guidroz and Z’ Schettewi. All of this on a school day! 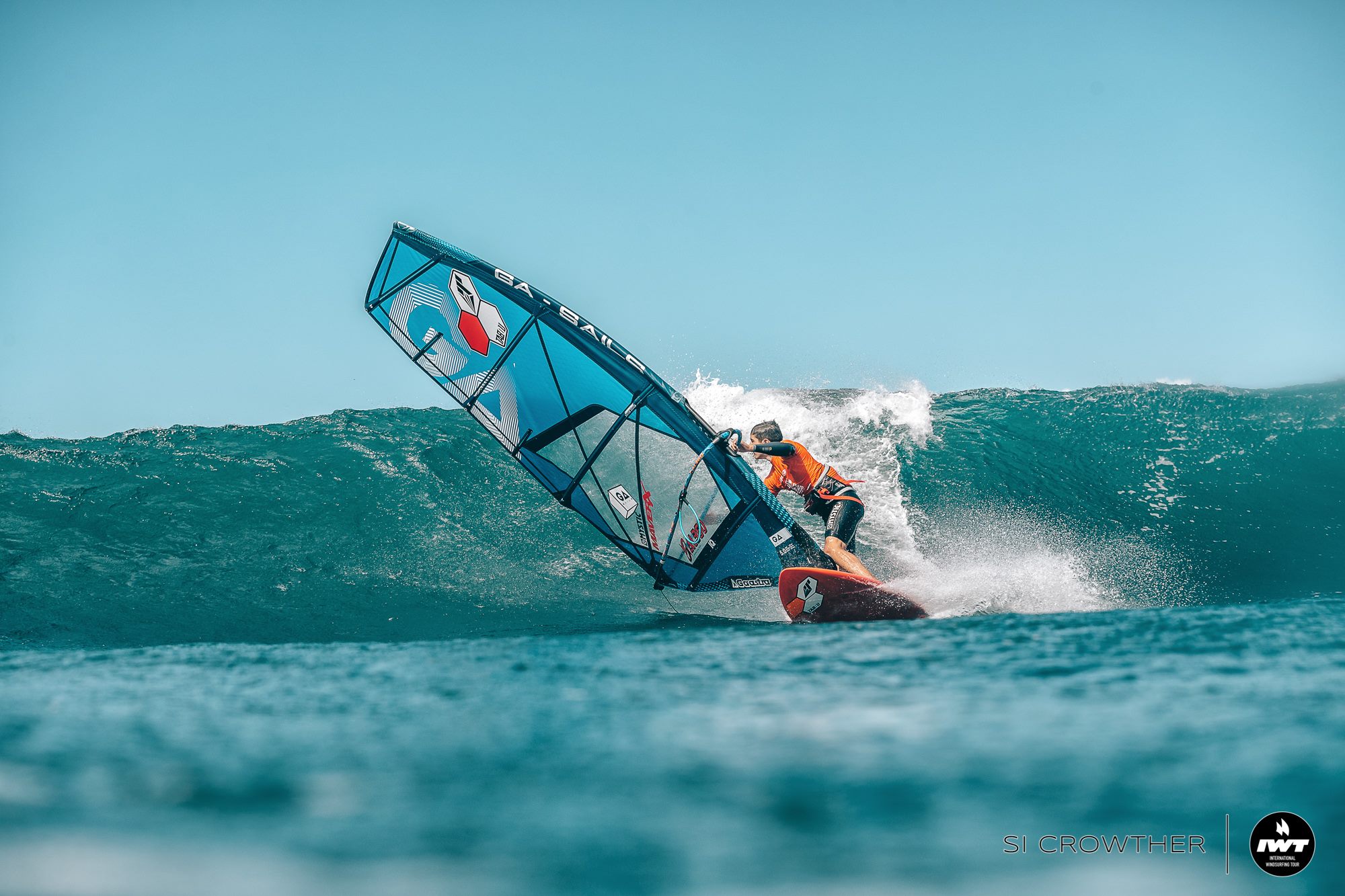 After the ocean pumped so many set waves into the U/17 final it calmed considerably for the Masters final that followed. The Masters fleet is tough. It includes 22 riders, at least 9 of whom competed in the pro fleet this year. Many others have been pro riders in years past. Making the top 8 is a major achievement. Making the final 4 is a serious career highlight. The intensity of this final was highly anticipated amongst the amateur divisions and spectators gathered on the Ho’okipa hill to watch. The heat opened with a flurry of action as each rider scored a solid ride in the opening two minutes. The ocean then took a long breath and the riders began searching ever more desperately for their second wave scores as the 20-minute heat counted down. It was close between red-hot favorite, Ilya Escario and Paul Karaolides, after Karaolides had a rip-roaring first wave ride with two huge powerful turns right on the lip in the critical sections. Escario had his work cut out for him but he was cool under the pressure. He steadily built his two wave scores with solid wave selection, precision turns, and clean aerials to rack up a lead that the others could not touch. Escario was 1st with a delighted Karaolides in 2nd. Last year’s Masters champion and hero of the Aloha Classic live-cast show, Kai Katchadourian, had to settle for 3rd place this year, with Canadian aerialist, Patrick Bergeron, taking 4th after wiping out on a big aerial in the early stages of the heat that could have made the difference. 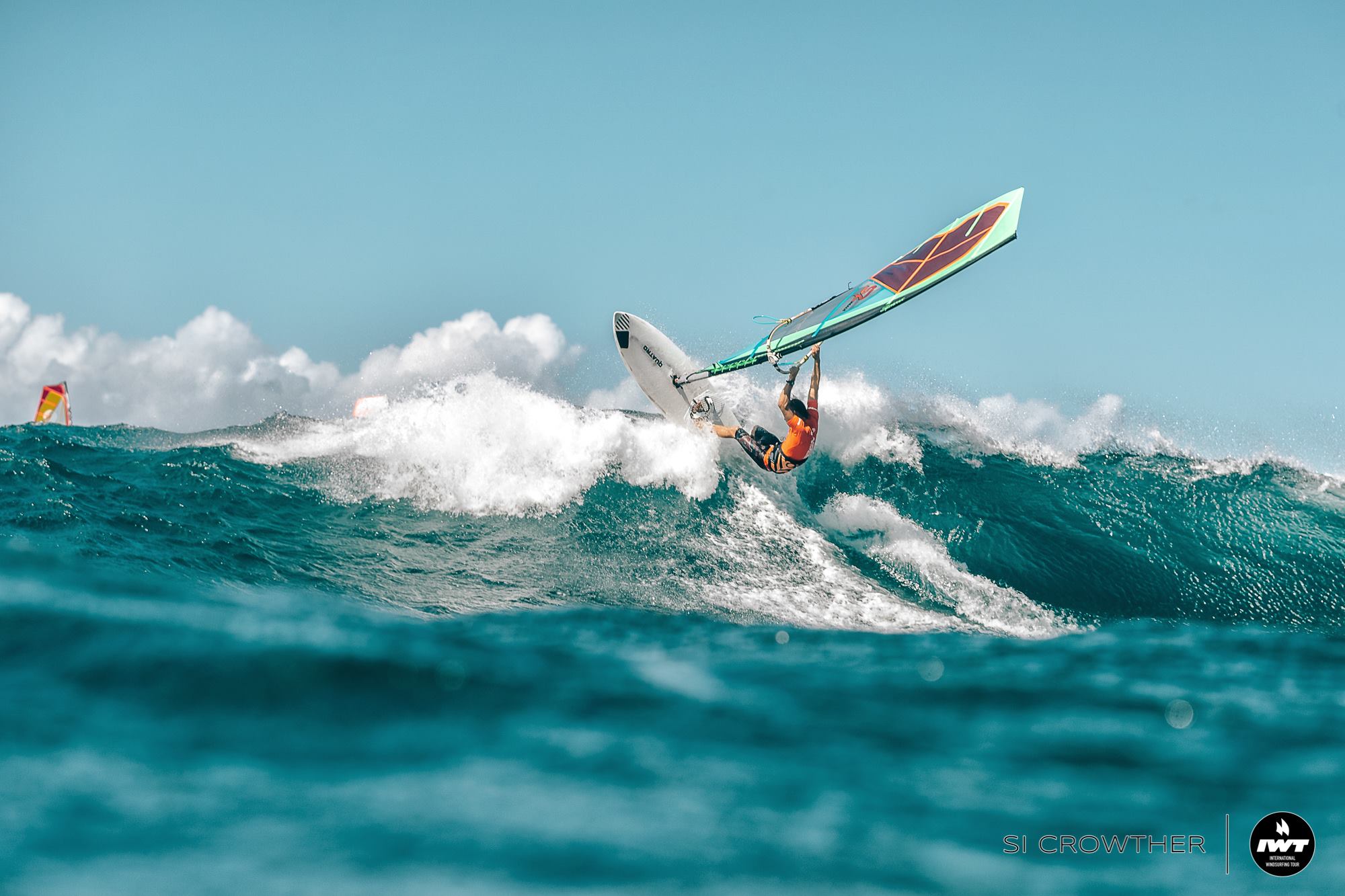 Returning to the Youth, this time for the older more powerful young men’s final in the U/20 division. This heat saw the local young gun Jake Schettewi steal the show and dominate an otherwise also highly talented field. Three years ago, as a skinny little 14-year-old, Jake Schettewi made the Amateur final here at the Aloha Classic. Last year and the year before, Jake’s skills have shown a huge improvement. He entered the pro fleet here at the Aloha and scared the daylights out of many of the seasoned pro riders as he cut a swathe through their early ranks. This year, Jake has filled out and is now a powerfully built 17-year-old with the skills of a tiny agile rider. This is the most dangerous combination there is in wave sailing, and Jake’s power is being put to use as the plumes of snow radiating from his awesome top turn lip hits attest. Schettewi dominated to win. Second place was well earned by the skillful riding of this year’s IWT Youth overall champion, Takara Ishi from Japan. Taking 3rd on the highly competitive podium was again Takuma Sugi from Japan with young Italian Nicolò Spanu sailing strongly, but unable to match the power and speed and aggression of the other three full pro riders in this Youth final. 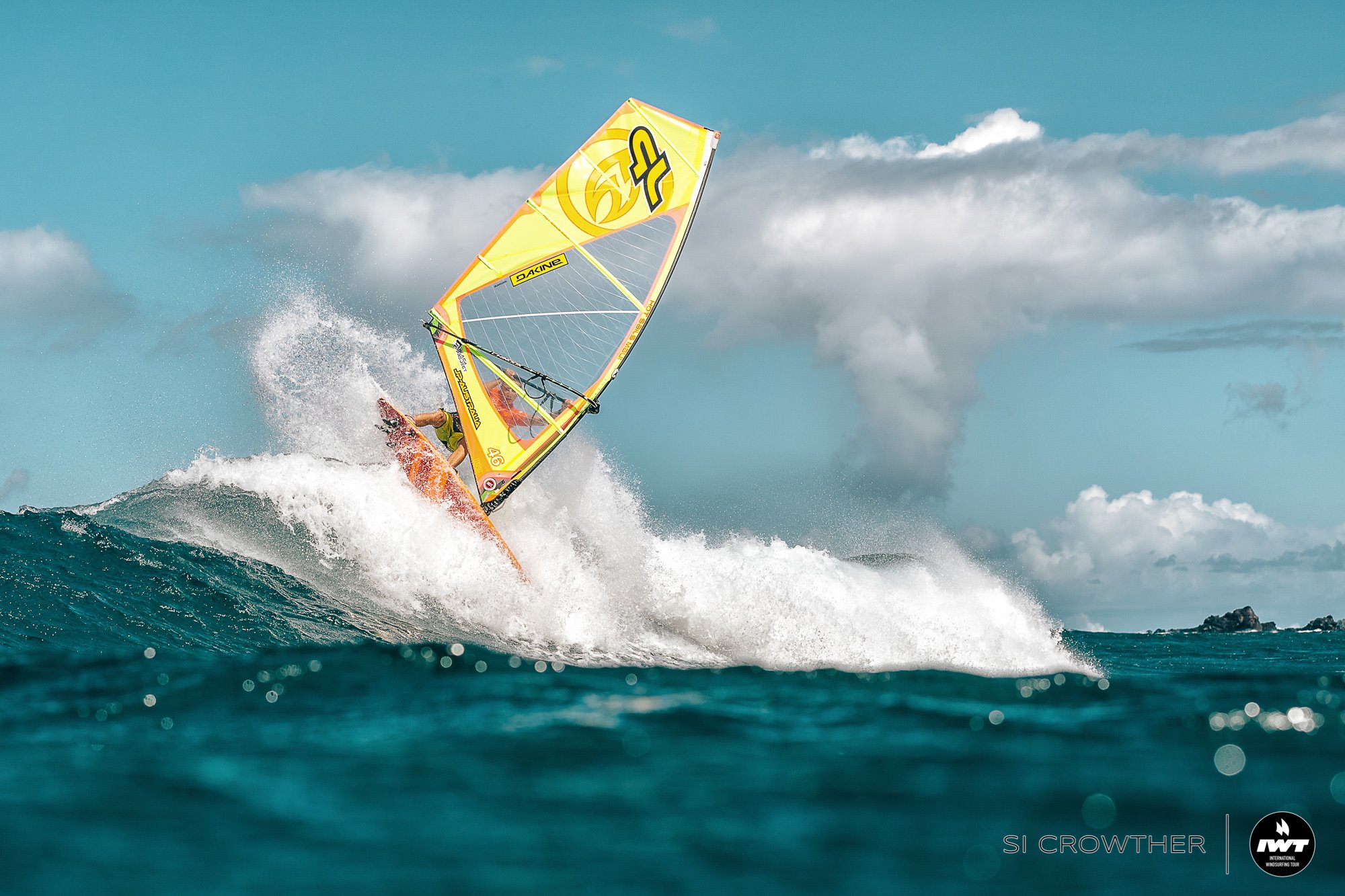 The last final of the day was for the Amateur division. This is the largest of the amateur division fleets with 32 riders. It includes youth from all ages, most of the Masters, and many of the Grand Masters who choose to do double duty. Riders come from all around the world to test themselves at the holy ground that is Ho’okipa. It’s a long haul to make it through all the rounds to the four-man final – the 29th heat of the draw. Rising to the top of this big field was once again the wiry figure of Ilya Escario from Spain. Some of his rivals in this final may have been holding out some hope that Escario was tired after his Masters final 22 minutes earlier, but they were in for a shock as he opened the heat with a bang and didn’t look back scoring wave after wave and racking up the points. The other three riders, Luc Guidroz (Maui), Simeon Glasson (Australia), and Jeff Henderson (Maui) were all in good form and were all pushing Escario hard, right up to the buzzer. It was reported that for much of the heat Glasson was close on points but a buzzer beater from young Guidroz stole the show to propel him ahead of the IWT Amateur overall champion into 2nd. Glasson took 3rd with Henderson taking 4th after his impressive 1st place in the earlier Grand Masters final. 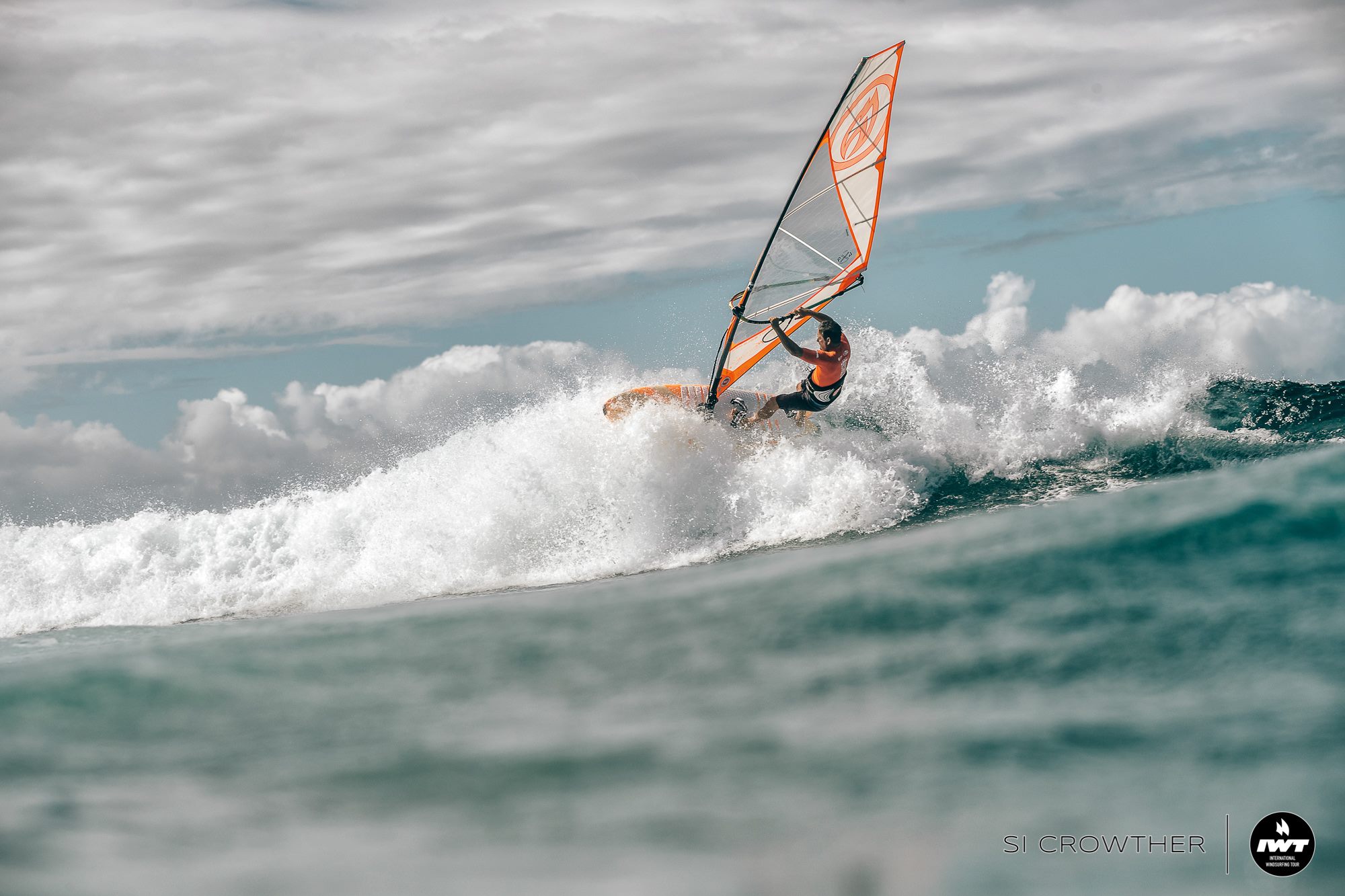 The awards night and closing ceremony will be held at the Maui Country Club this Saturday, November 10, at 6:30 pm. Come one, come all, it’s a bargain and it’s always a hugely fun night with the large international field of riders and their adoring fans (friends and family!) celebrating another huge IWT year around the world at the mighty Aloha Classic of 2018. 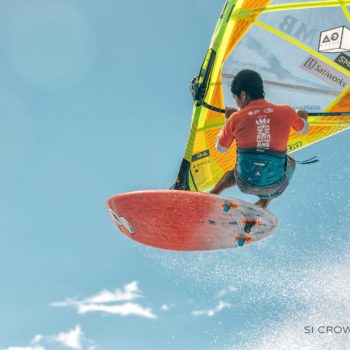 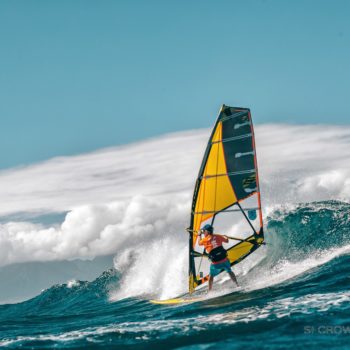 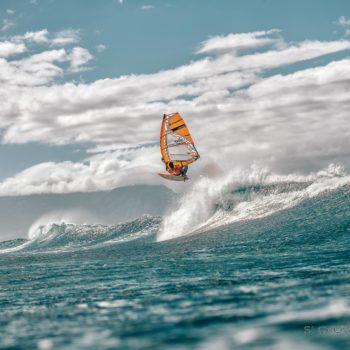 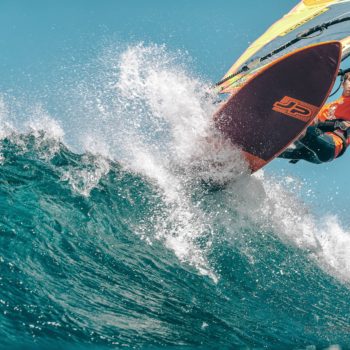 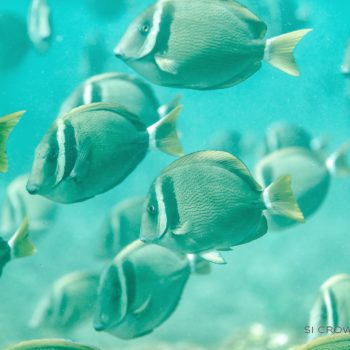 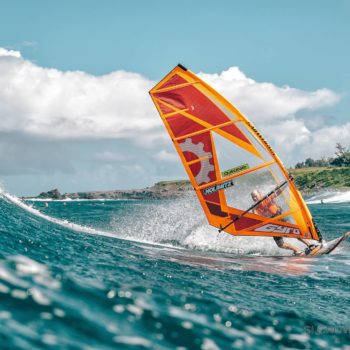