The final awards night of the International Windsurfing Tour each year is always a very special event in the world’s windsurfing calendar, but this year it was particularly special. Not only were there awards celebrating the triumphs of the IWT overall results in all divisions, the Aloha Classic results in all divisions and the PWA Youth World Cup results across age groups, but also this year, after 9 years at the helm, the legendary founding Tour Director, Sam Bittner Wilson, officially passed the IWT torch over to her team to carry on so that she may take a much deserved rest from rigors of running and organizing the world’s largest Pro/Am Wavesailing tour ever known. There will be more about this transition and more about Sam’s achievements in future media releases. For now, let’s focus on the champions night of nights.

The IWT overall champions were first to be crowned. 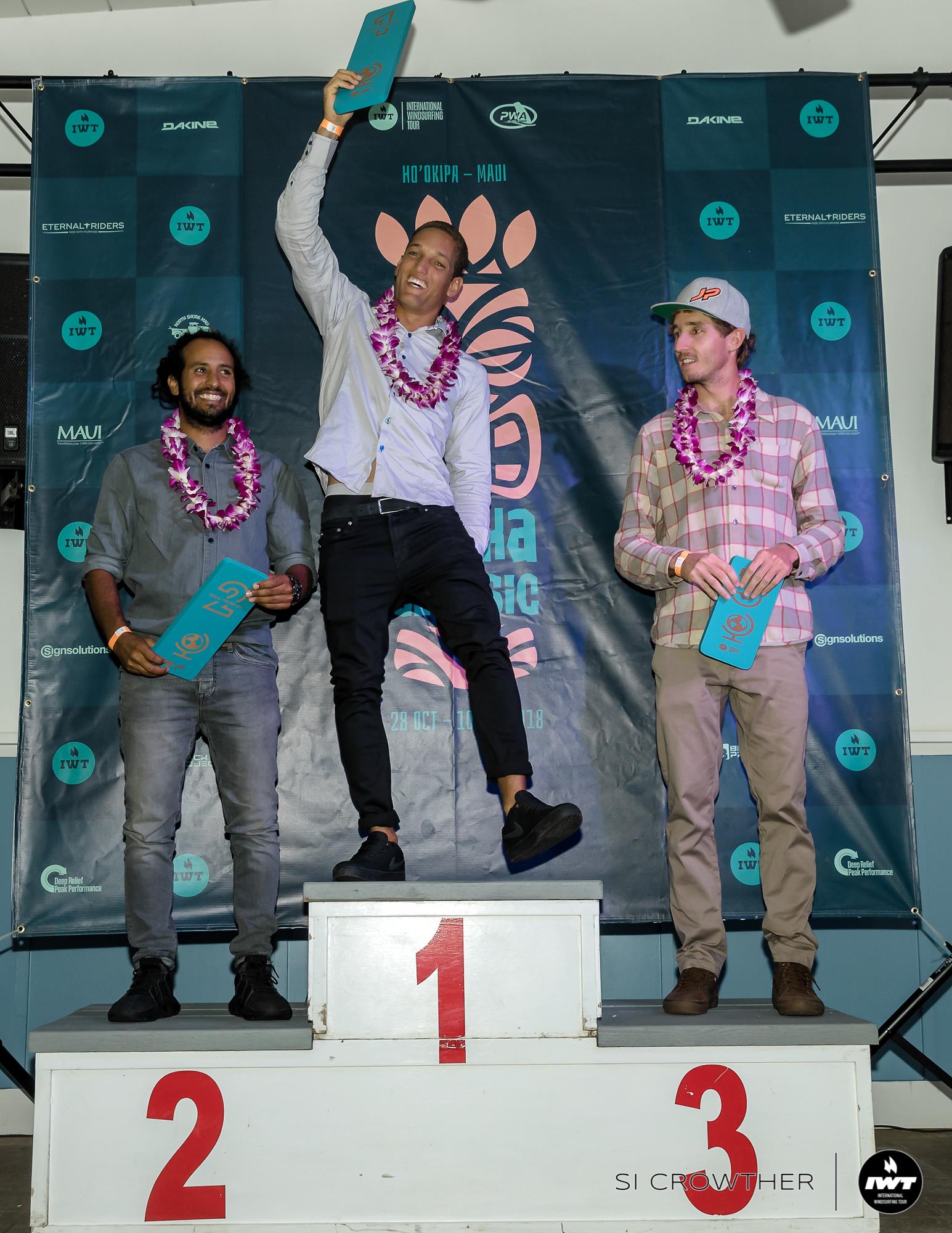 The Pro Men’s division was won by Antoine Martin from Guadeloupe who’s time on the world stage seems to have finally arrived. Martin has been a hugely creative force in wavesailing for many years. Pushing the limits of aerial moves to now include NO HAND goiters. For many years he has pushed these limits and crashed trying. For many years he has been a regular PWA rider sailing strongly with jumps and reaching rankings between 10 and 20 but his wavesailing skills were not given their chance to shine in the PWA events dominated by cross onshore winds. By shifting his focus to the wave-riding style of events offered on the IWT this year, his skills were finally rewarded. Congratulations to Antoine Martin for an outstanding year. 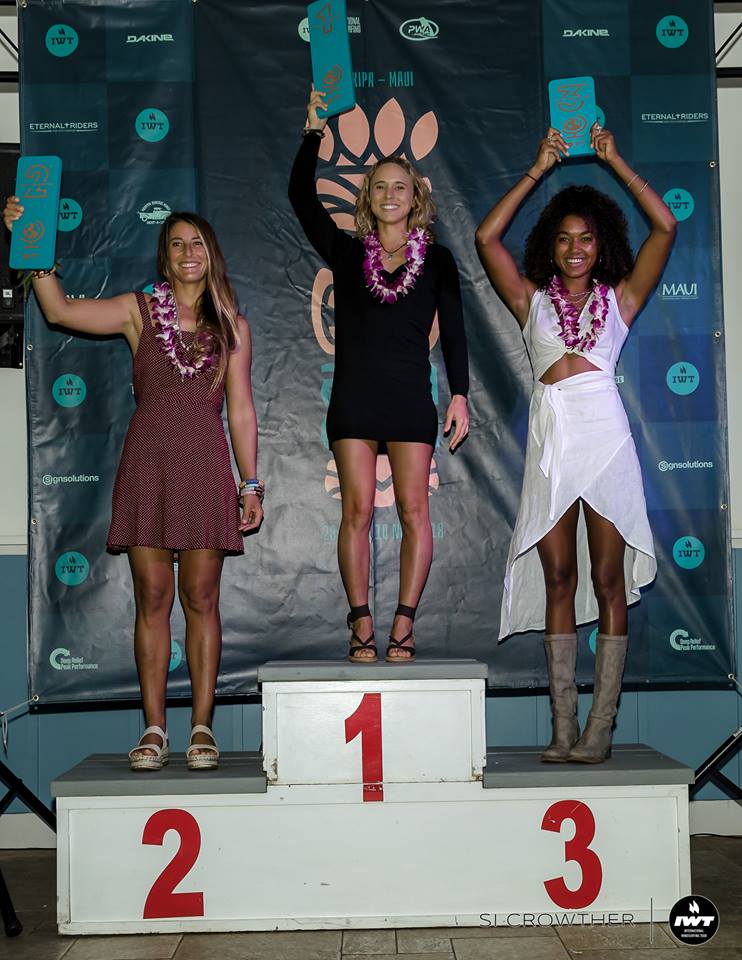 The Pro Women’s division was won by Sarah Hauser from New Caledonia who almost didn’t make it due to severe illness in Baja Mexico this year that forced her to hold a diabolical last plus one result of 8th place. To many riders only able to reach 4 events on the tour, this would have been the end of the dream, but Hauser is made of sterner stuff than most. With Victories in Pistol River and here at the Aloha Classic final event of the tour she was able to cross the finish line a whisker ahead of the powerful and stylish Spanish rider Maria Andres to take the victory. Congratulations to both riders for a terrific battle across the tour.
The Amateur division was won by Simeon Glasson from Australia. Simeon sailed strongly in this division showing that he is a force to be reckoned with, whether competing against the Amateurs or the Masters.

The overall youth champion was a skinny little cool kid with a constant smile and wild approach to dangerous wave riding, Takara Ishii from Japan. Ishii opened the tour with a bang making the Pro Men’s Final in Morocco’s huge surf and wild winds to astonish the tour organizers and fellow competitors and make a clear statement that his time had come. Needless to say he dominated the Youth fleet in Morocco winning that division in style. Ishii went on to compete in Peru, Chile and here on Maui to make up the 4 event results to count towards the overall.
The Master’s division was also won by Simeon Glasson from Australia. Simeon sailed strongly all year putting on a truly dominating performance winning the maximum number of points with a clean 4 event sweep

The Grand Masters division was won by Pali Gueltrini from Italy who started 2018 at the Morocco event and had only planned to enter that one. But the IWT bug bit hard and Gueltrini was hooked. He travelled to Pistol River where he won and the contest with Scott Shoemaker was then really on. The two were neck and neck heading into the final event at the Aloha Classic with Shoemaker in front by a nose. This final event is tough. Gueltrini was coming to sail Ho’okipa, a wave he had never been to before, against the experienced Maui local Shoemaker. This didn’t stop the determined Guletrini, who pushed through to 7th place in the ultra-competitive Maui field of riders, while Shoemaker found himself in 9th. That was enough of a difference to get Gueltrini in front by the narrowest of margins to take the overall crown that he chose to dedicate to our dearly departed fellow Grand Master rider Mike Colee. Rest in Peace Mike.

The Aloha Classic champions were next to be crowned. 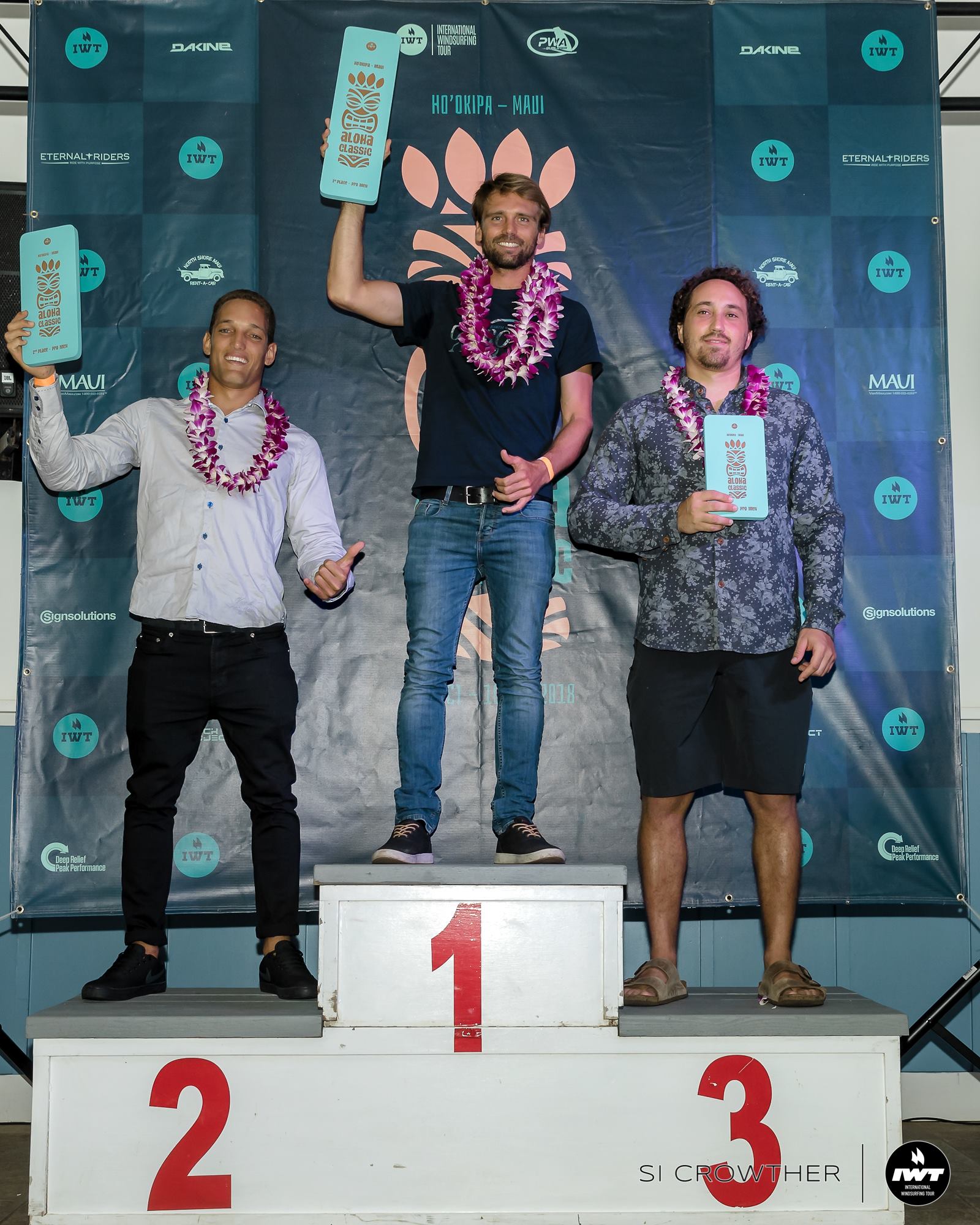 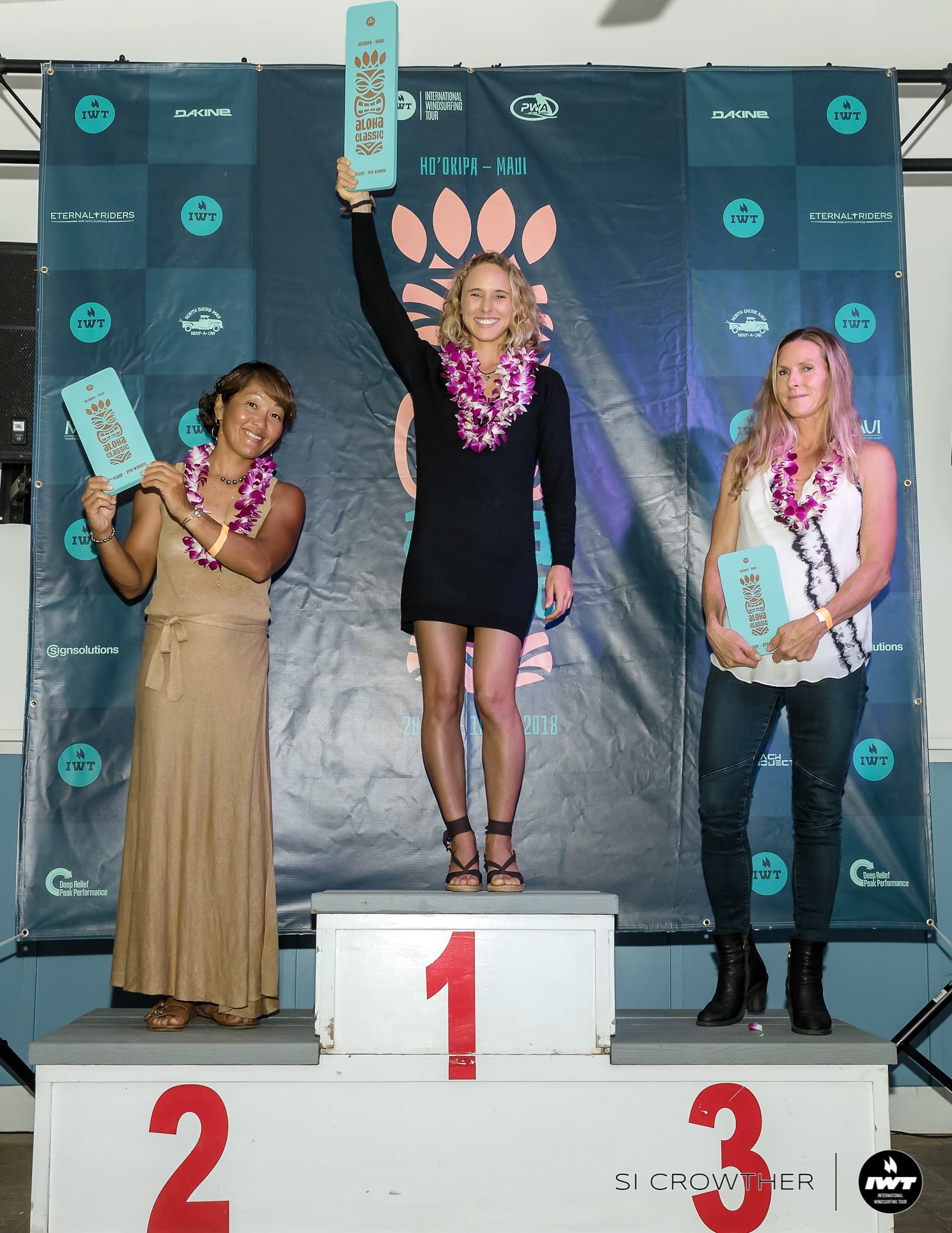 Finally, the PWA World Youth Cup champions were crowned.
The PWA Youth World Cup is an extremely exciting initiative from the PWA to support Youth wavesailing around the world. With growing youth fleets across major European events such as Almerimar, Spain, with 38 youth competitors in January, Pozo, Spain, with over 40 youth competitors in July, and Tenerife with similar numbers in August, the youth of the world are clearly excited to be a part of this terrific new PWA venture. This year the IWT was honored to be able to contribute to this excellent PWA tour by including the Aloha Classic Youth division results for under 20’s and under 17’s. The PWA overall Youth World Cup under 20 division was decide and announced by the PWA after the Tenerife event, but the PWA under 17 division was decided here in Maui. It was won by a very powerful performance from Takuma Sugi from Japan. His achievements were lauded by the crowd on the night and there is a fantastic optimism about future Youth World Cup events in cooperation with the PWA. 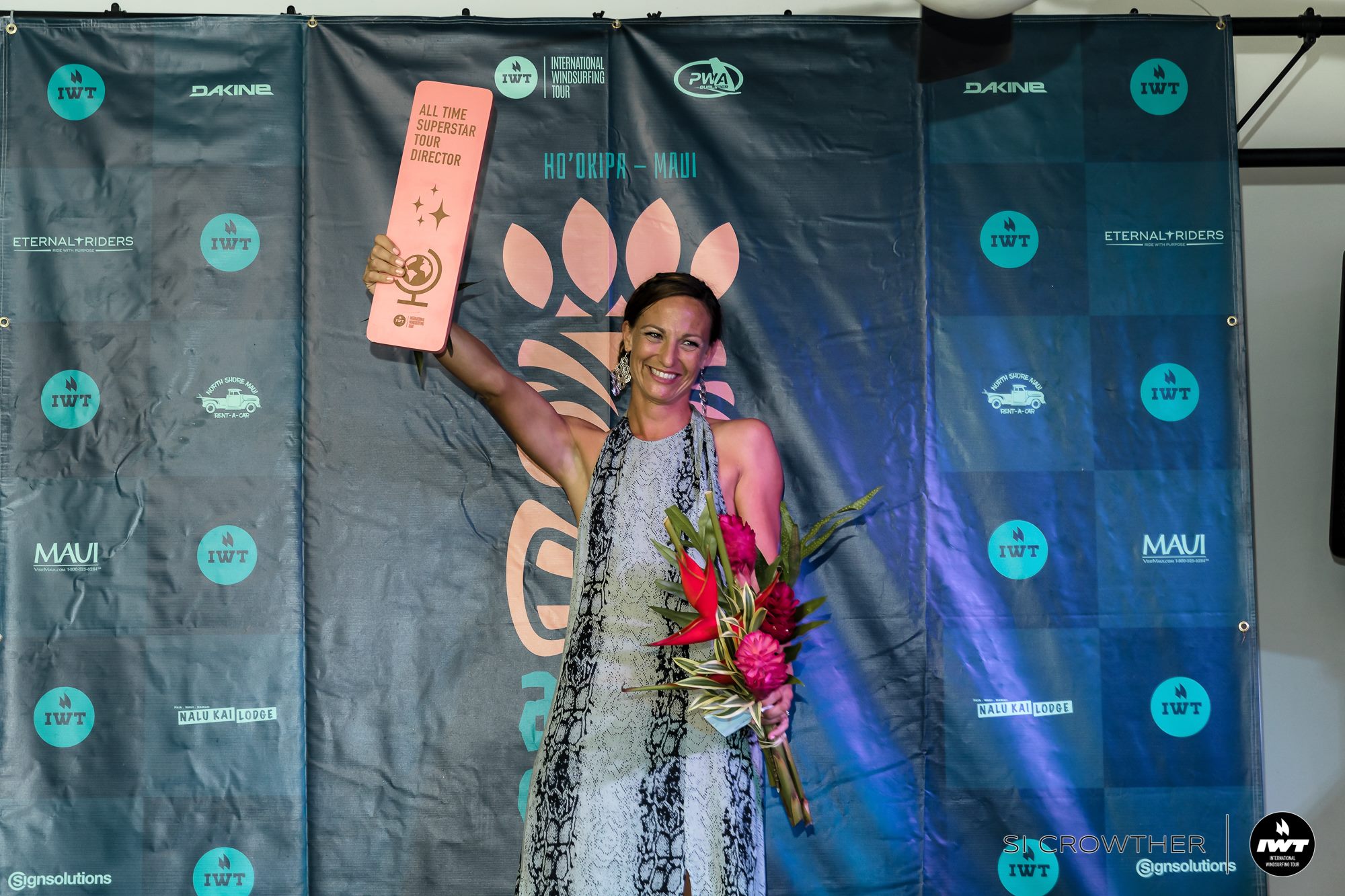 The Ceremony closed with the official departure speech from Sam Bittner Wilson and a farewell tribute video made to honour her achievements. The IWT, originally known as the AWT ran its 60th event, after 9 years, with this year’s Aloha Classic. 60 events “Inspiring the future of our sport”. 60 events that brought Pro and Am riders from around the world together to have fun, wavesailing in amazing places, bonding together to create an amazing global family, and to expand the opportunities for riders of all skill levels. Sam Bittner Wilson has made a remarkable and singular contribution to the sport of windsurfing by co-creating the AWT / IWT with Russ Faurot and we salute her remarkable achievements.

Next year’s IWT calendar is now officially released on social media around the world. More on that soon. 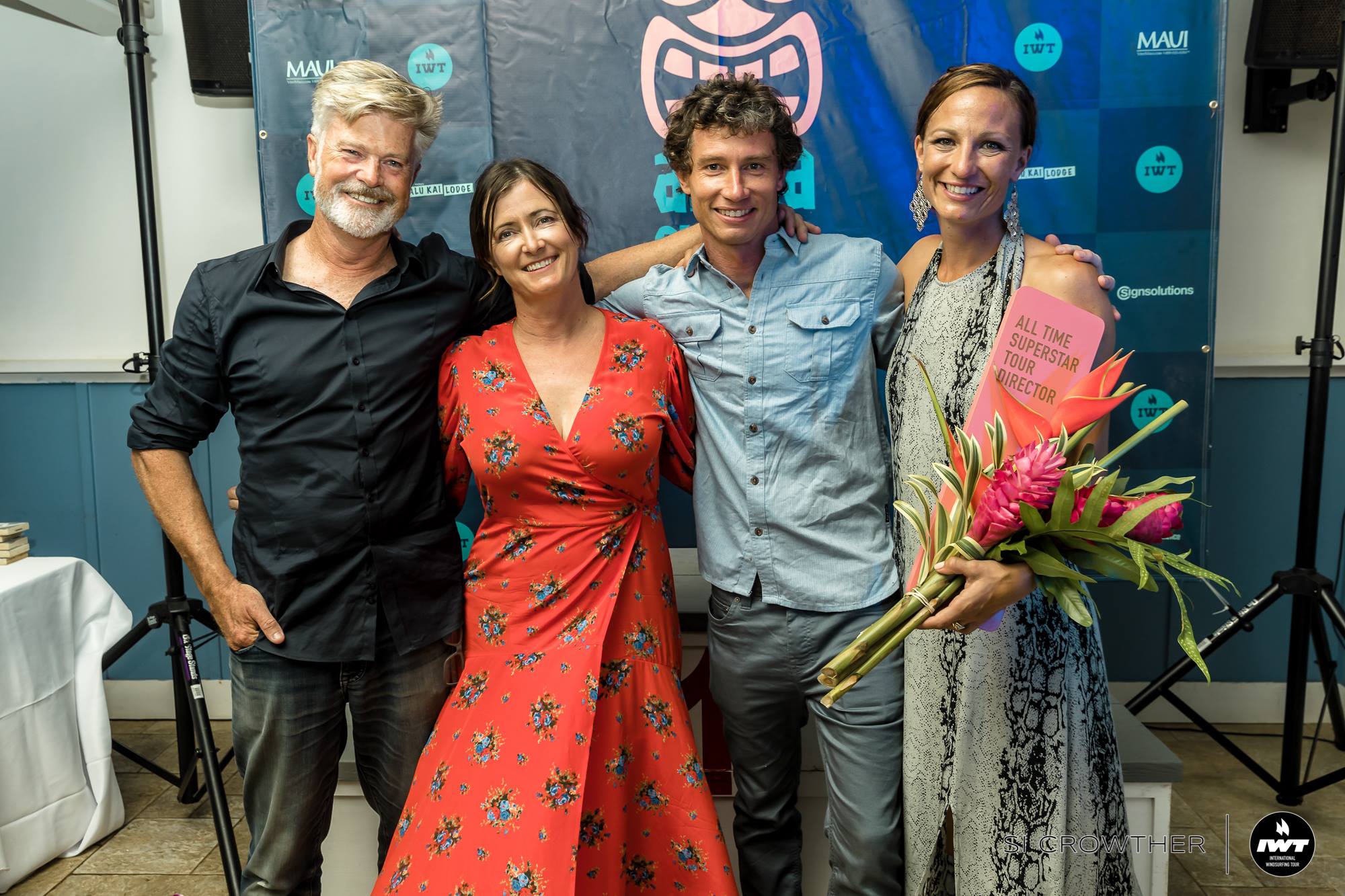