Day 12 of the NoveNove Maui Aloha Classic marked the culmination of competition for this truly unique and epic contest. The swell picked up a bit from yesterday and the trade winds filled in throughout the day. It was time for the one on one heats to see who will rise to top and claim victory in Maui. By the time the horn blew to mark the start, the Ho’okipa lawn was packed with spectators, not to mention the nearly 5,000 people watching the live stream at one point.

The first action of the day saw the continuation of Fiona Wylde’s tear through the double elimination bracket as she took on the 3rd seeded Sarah Hauser. In the light winds, the heat turned into a chess match of who could pick the best waves and still be able to get outside for the next set. Wylde’s last wave was the best one of the heat and enough to push her past Hauser.

Next up, Wylde took on the injured Ingrid Larouche, who despite obvious pain in her maimed foot, was determined to get on top of the podium. The beginning of the heat saw a set of exchanges between Wylde and Larouche, which went in Larouche’s favor to put her ahead by a point. The next exchange of waves put Wylde in command after excelling on a proper Point wave, giving her the win to advance to the finals.

The final round was a repeat of the 2014 Aloha Classic with Wylde facing Iballa Moreno. The heat started with Wylde picking off a bomb on the outside. She made use of the entire face and finished her ride with an incredible smack of the lip to score a 7.62, putting the pressure on Moreno. Wylde and Moreno exchanged some decent waves, with Moreno putting up a 7.4 to stay in the game. Wylde continued her expert wave choice by getting one of the biggest waves of the heat, aside from perhaps her first one, and again impressively made full top to bottom turns finishing with another outstanding vertical hit to the lip for a 7.5. Moreno finished the heat on a smaller wave, but carved it to pieces, impressing the judges with her full cutbacks enough to get scored an 8.0. This gave Moreno the victory for the second time in as many years to accompany her 2015 World Championship. Congratulations, Iballa!

The men’s rounds started in the same spot with a hard charging Levi Siver on a mission making his way through the double elimination bracket. First up for him was former world champion, Thomas Traversa. After Siver struck first, Traversa pulled off a wet goiter to the pleasure of the crowd. Siver responded with a monstrous airborne 360 landing him a 9.25 and a big cheer from the hill. The wind had cranked up a notch during this heat and Traversa got tossed around more than once. Siver finished the heat with another airborne 360 which sealed his ticket to the podium and to face Kauli Seadi.

Siver and Seadi exchanged some good waves at first. Seadi made the most of a smaller wave right in front of Siver. Siver responded with a one-handed aerial. Seadi again on a smaller wave pulled off a massive goiter to get a 9.25 putting him in command of the heat. As Seadi broke a batten, Siver needed a big score to take the lead. He pulled off another perfect 360 along with another good whack, but it was not enough as Seadi advanced to the final.

The stage was set and the riders were ready. Seadi, representing the title sponsor, NoveNove, was to take on defending Aloha Classic champ, local Hawaiian, and AWT regular, Morgan Noireaux. The first exchange of the heat put Seadi in first with Noireaux getting the next score with a big under the lip hit. Seadi was charging hard, but missing, as Noireaux was strategically waiting for the right sets. Noireaux’s strategy paid off when he got the wave of the set and performed three radically vertical, under the lip turns to perfection, scoring him an 8.38. Seadi responded with a speedy down the line attack, floating over a section and completing two roundhouse cutbacks to get an 8+ point wave for himself. This put him in the lead as he forced a Super Final.

The Super Final started with Seadi striking first and second, getting two solid scores before Noireaux got one. However, Noireaux’s patience paid off again as he scored an 8.88 with his signature near perfect execution attacking the lip. After another decent wave by Noireaux he was handedly in the lead by nearly two points. Seadi needed to land something extraordinary to pull off the upset, but Noireaux put the nail in the coffin with another stellar wave. And just like that, it was official; Morgan Noireaux goes back to back and wins the 2015 NoveNove Maui Aloha Classic!

With so much incredible action, wind and waves of epic proportions at Ho’okipa, and amazing performances by so many of the best windsurfers in the world, the 2015 NoveNove Maui Aloha Classic will go down in the history books. A huge congratulation to all the competitors and a big thanks to our sponsors, especially the County of Maui and NoveNove, as well as AWT director, Sam Bittner, for pulling off another spectacular event.
We want to invite everyone who has enjoyed the event to join us on Nov. 10th for the closing party at the Maui Arts and Cultural Center. Doors open at 6 PM and there is a full catered dinner, drinks, awards, and entertainment. We also have a raffle with prizes that include a NoveNove board, a Chinook carbon boom, an S2 Maui sail, and a year’s subscription to Jimmy Hepp photography. Tickets for non-competitors are being sold for $35 at MauiArts.com ($45 at the door), with any proceeds going to support the American Windsurfing Tour and more great events like this. 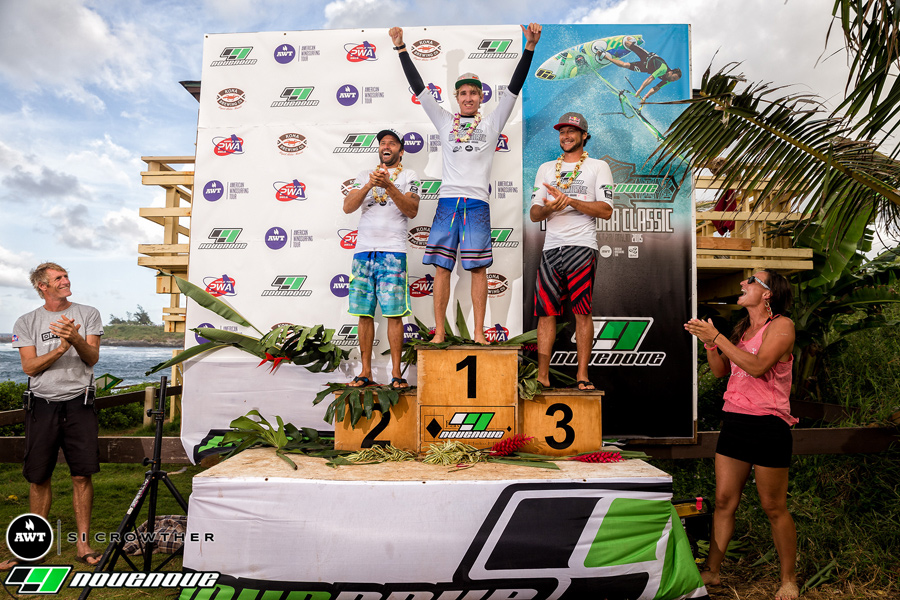