Stellar conditions continued for Day 5 of the Pacasmayo Classic to wrap up the remaining heats in Womens, Masters, GrandMasters, Youths, and the Pro Final.

With 13 heats left the call was made for a 12:40pm start with the Youths getting back out on the water.  The waves were building with the pushing tide and the winds were already up, and the groms were flying.  PWA rider Mortiz Mauch opened up his youth heat with a perfect goiter, and little Yoav was flying down the line with nice turns and good aerials while holding on as the winds continued to increase. 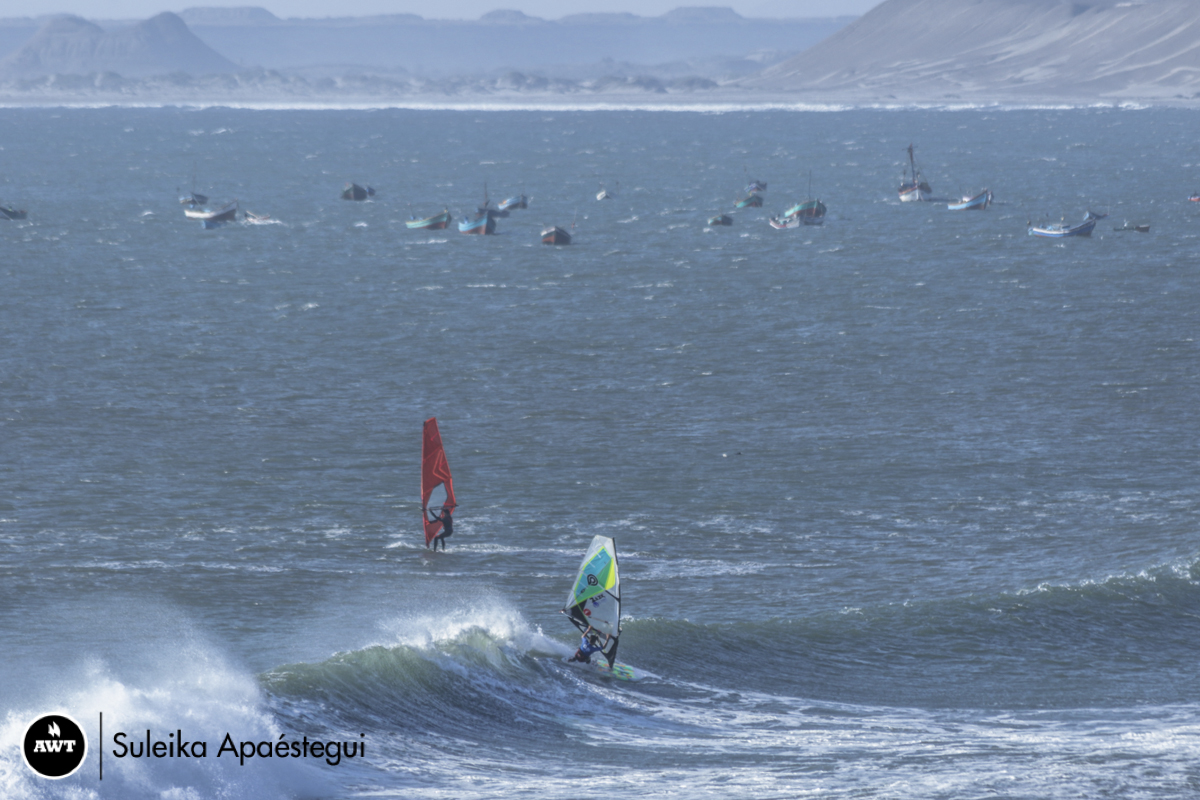 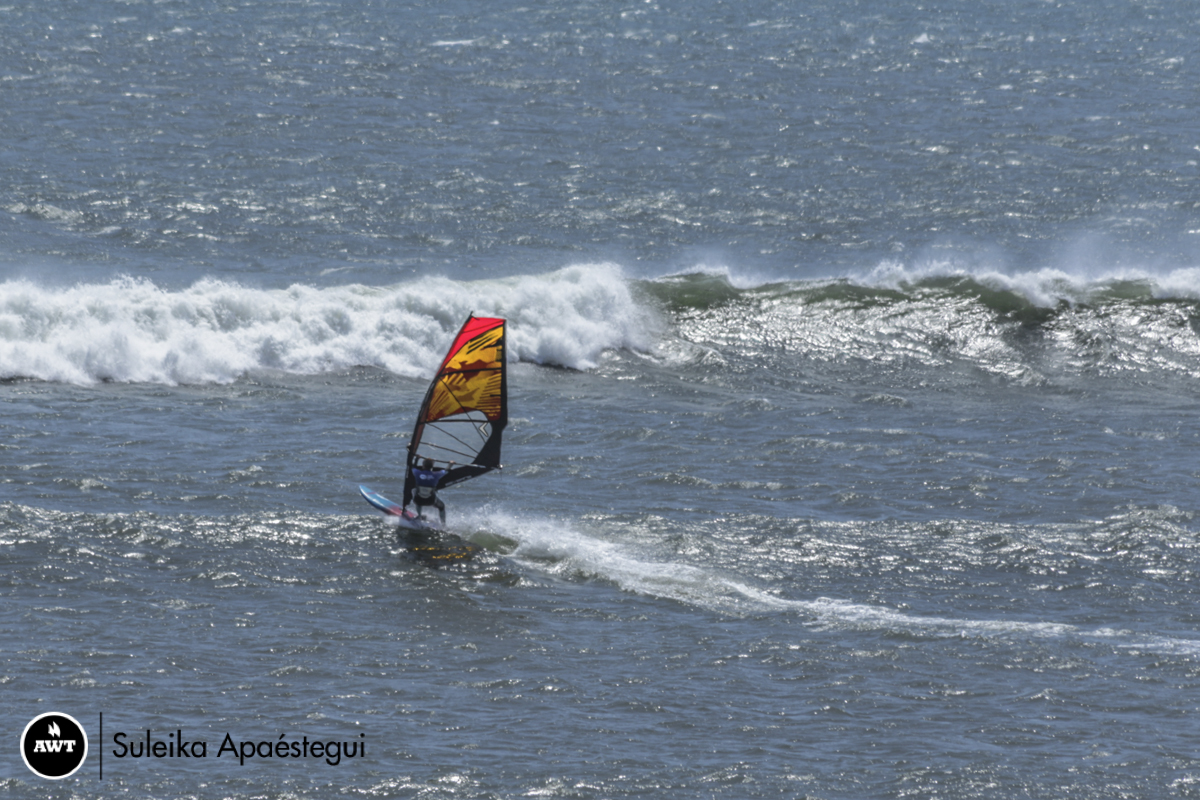 The Women’s redemption round was up next and it was Peruvian Maria Belen and Australian Cheryl Cater fighting their way out of the round and back into the game for the semi finals.

The masters and grandmasters hit the water next and there was no letup of action whatsoever.  Jason Cater and Shane Finigan tore apart wave after wave in their heats, always having an epically close battle for the Masters.

While in the Grandmasters, Jamie Brown continued to find the best waves from the point to the resort, linking together turns after hits on closeout sections and great aerials to show that there was no lack of action in any of the fleets.  Claus, Mortiz’s dad, also had a couple great waves all the way through. 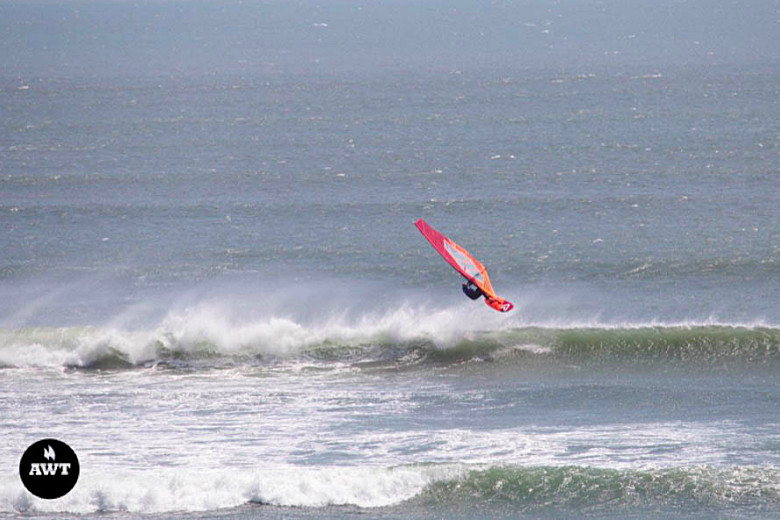 The intensity rose as the afternoon progressed and the semi final rounds of youth and women commenced.  The youth’s could not stop catching waves, and both heats had full score sheets for each rider, non-stop action.  In the first heat it was big Yoav and Moritz edging out Peruvian Champ Alessio.  Alessio had some great wave-riding, but it was Mortiz and Yoav that got the better waves to work with, and the points to get through.

The women’s semis were extremely close as well, as all the ladies were able to find some great waves as the conditions continued to hold.  In the end it was Bettina, Maria Belen, Bjorte, and Sarah Hauser advancing from their heats and into the Final.

After the semi’s the call was made to move the judges closer to the point for the finals for all divisions.  Forty minutes later competition was resumed with the Pro Fleet heading out for the finals.  The conditions were amazing.  Judges were dumbfounded with the amount of perfect waves rolling through, and it was hard to sit still and watch the amazing conditions, you just wanted to be out there riding.

The Pro final, with Moritz Mauch, Forrest Ladkin, Russ Faurot, and Maxime Fevrier, was all time.  In the minute before the heat started, lines started to roll through the point, and just as the green flag went up, Forrest picked up one of the waves of the week.  A perfect logo-mast high peeler, Forrest rode it flawlessly, linking together prefect full rail turns with huge hits and nice aerials all the way through.  Moritz was right behind him on another gem, and then it was Russ and Maxime after that.  And the heat continued that way for the following 18 minutes, non stop sets and epic rides from all the finalists in the division.  In the end the judges had a unanimous 1,2,3,4- but it was close! 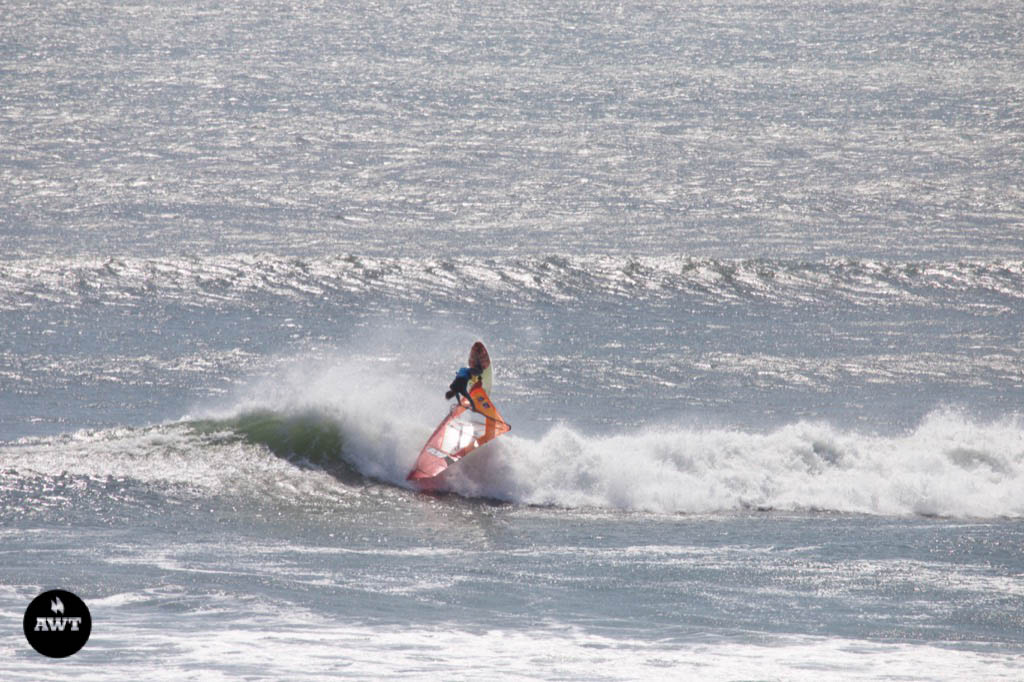 After the Pro’s it was the Master’s and Grandmaster’s turn hit the point.  Again Shane and Jason were going wave for wave with awesome turns and smacks all the way through, and Pier and Peter Kimball got some incredible rides as well.  In the Grandmaster’s heat the wind had started to fade slightly, but still Jamie Brown was able to find 2 good ones to solidify his spot on top of the bracket.

The youth’s had no problem getting back out in the dying winds as the waves were still coming through.  Kimo Brown opened up the youth final with a perfect set wave that peeled all the way through the point and down towards the resort, with nice turns and an aerial at the end to start off the final.  Then it was big Yoav who picked off a bomb and continued his streak of perfectly timed turns and aerials with great style all the way through.  And if that wasn’t enough, Moritz was right behind him.  This was Mortiz’s 4th heat of the day, and his energy was still palpable back on the bluff as he flied through massive turns and huge aerials.  Little Yoav picked off some great waves too and continued to land his aerials and link together some great turns, leaving the judges and spectators inspired and stoked at the future generation of the sport. 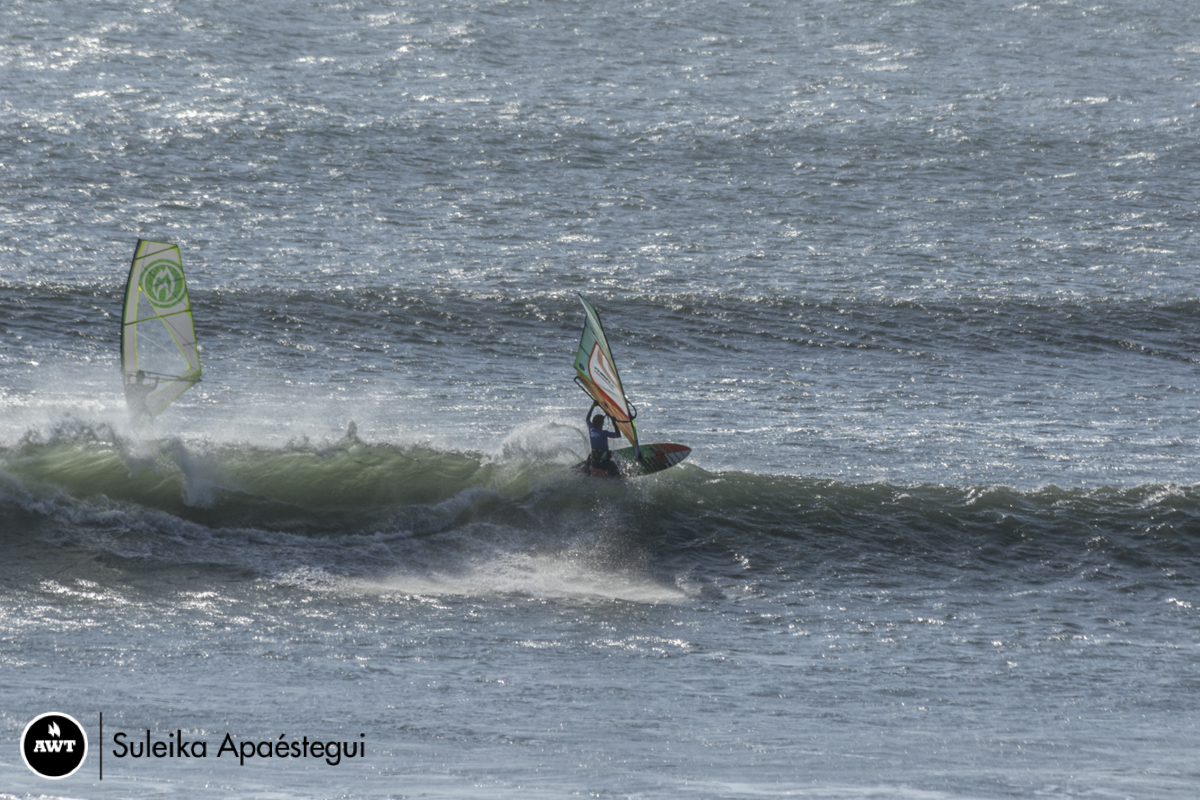 Last up at 5:20pm was the ladies.  On 3.7-4.5s the ladies still had no problems catching plenty of waves and putting on an awesome show.  All the girls were ripping.  Sarah and Bettina were first up, and Sarah put up some great turns while Bettina rode her perfect set wave to perfection.  Bjorte caught an awesome wave at the point and rode it down past the judges near the resort.  Then it was Maria Belen, on a borrowed 3.7, showing her talent with some sick top turns, much more comfortable on the smaller gear.

The results have been kept secret until tomorrow night with the awards presentation, but all riders put on an amazing show.  With the Pacasmayo Classic coming to a close, all eyes are set now on the Nove Nove Aloha Classic in Maui to determine who will be the AWT overall winners- the race is tight!!!

Plenty of waves and wind still on call here in Pacasmayo.  Stay tuned to our social media channels (Facebook and Instagram) as riders get ready to hit the water and have some fun, and try out some Xensr Air’s to see how long they can go on what is without a doubt one of the longest waves in the world. 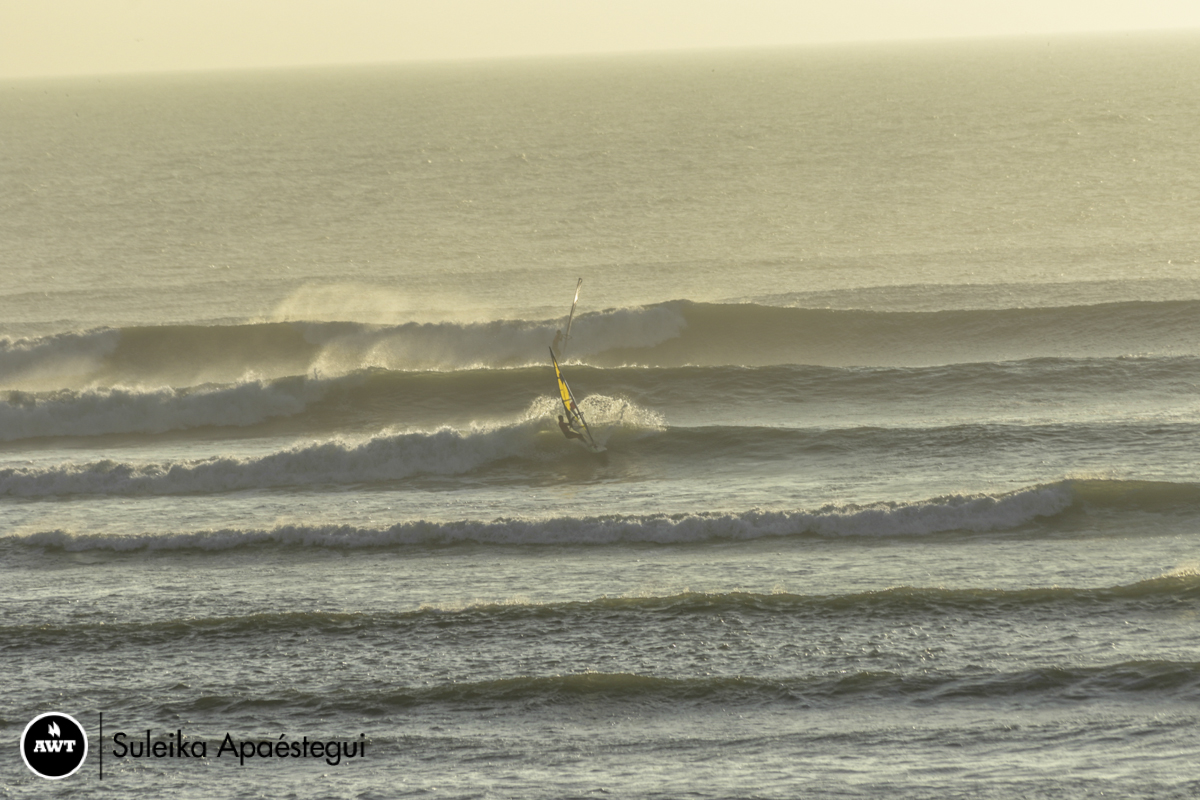