On Day 6 of the competition window the conditions fully came to the party. The first heats of the day started at 12:00 as the wind had filled in enough. Beautiful swell lines were rolling in from the point all the way down to the resort creating a perfect canvas for the competitors to take advantage of. The first heat of the day would be the Youth final, followed by the Masters, Amateurs, and finally the first round of the Pro men. 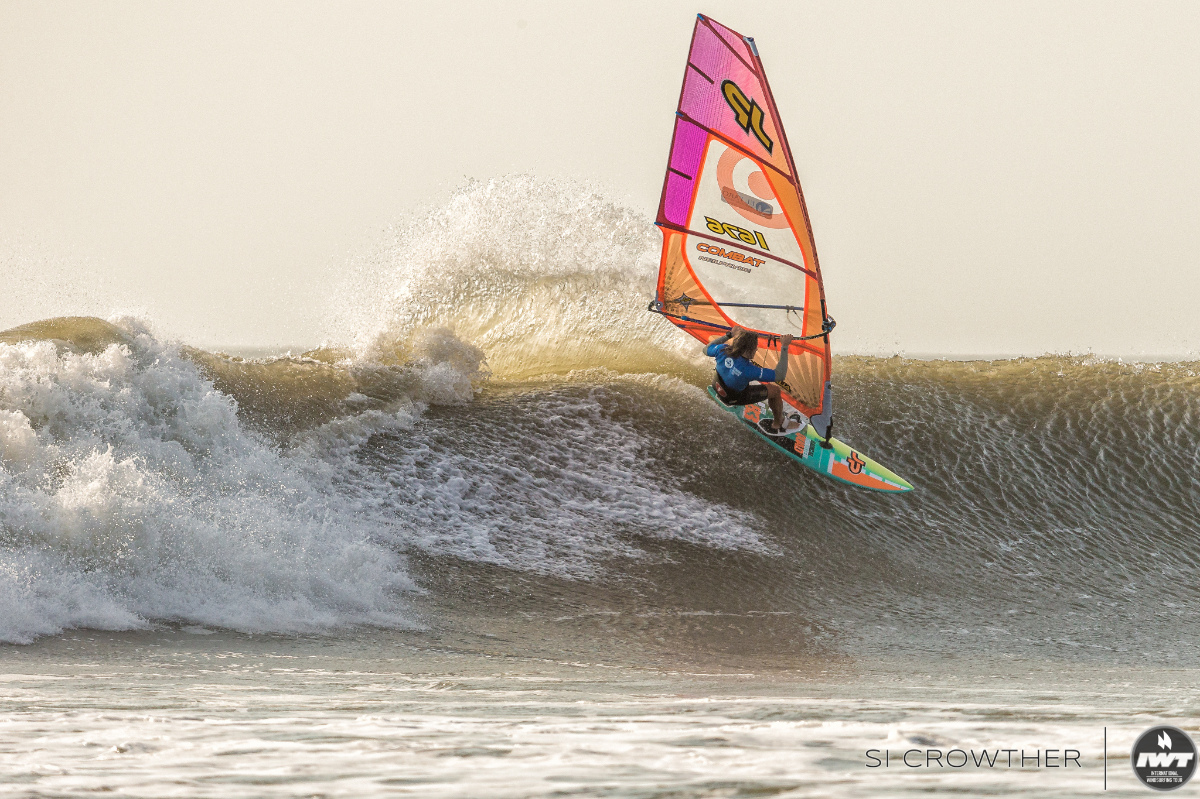 The youths put on an excellent display in the improving conditions. William Perez opened the heat with a solid wave ridden way up by the point, down to the judges tower, throwing buckets of spray along the way. Joaquin got a series of shorter waves, but showed his usual good timing and strong turns. Alessio also had a series of good waves, but wasn’t able to make the critical sections. Sabine Zola managed to find several waves as well, and rode them stylishly. Final results in order were William, Joaquin, Alessio, and Sabine.

Masters Heat 3
Despite an interference on his wave at the start of the heat, Peter Kimball showed experience and a level head to place second in the heat with consistently strong wave selection and smooth turns. George was happy to finally sail the twice post-poned Master Heat, while Yerko Radovic sailed fast and strong, timing his waves well to take the Heat 3 win. 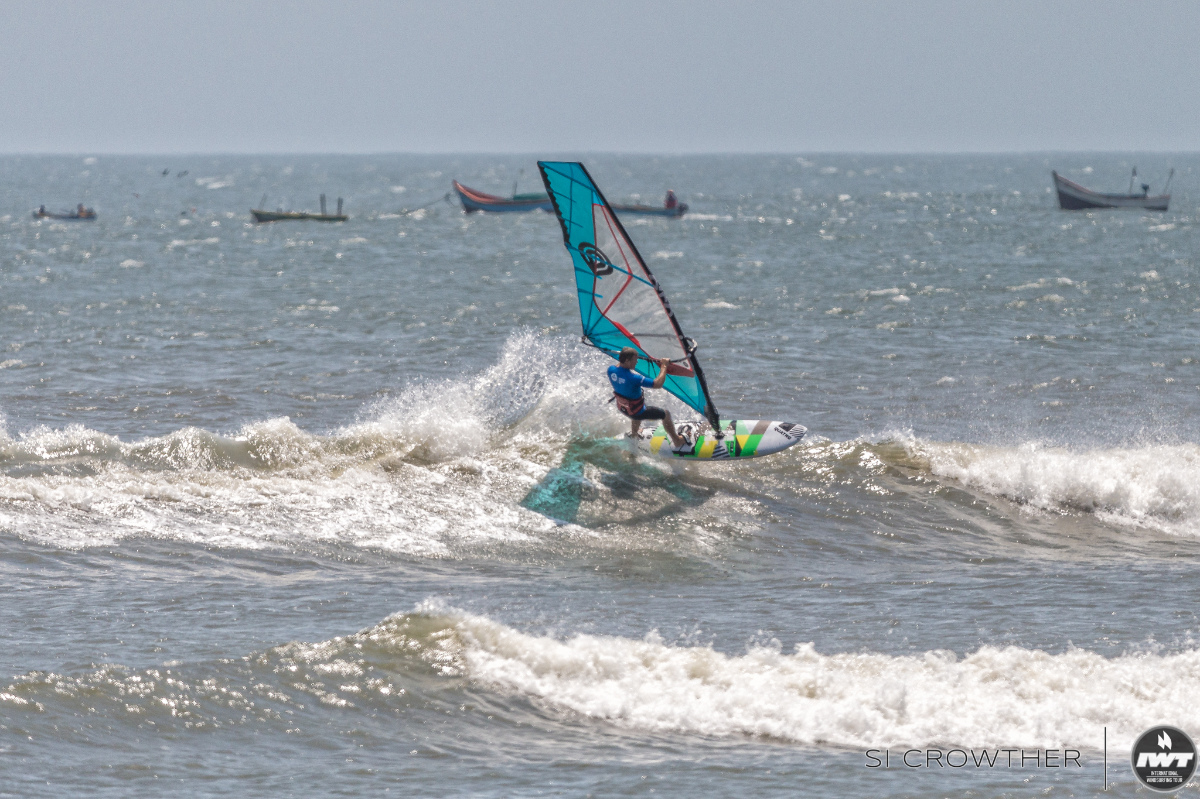 In the first heat of the Amateurs Semi Finals, Jonathan Pooley struggled to find a wave while William Perez worked the upwind section throwing spray to catch the judges eyes. Joaquin Desriviers managed to get some strong waves, to show off his vertical style. In the second heat of the Semi, Tom Soltysiak picked up some great waves with his flowing surfing style, moving fast down the line. Raul Reiner picked up some waves not quite as big as Soltysiak, but still managed some nice rides. Boris Van Cauteren struggled to find the waves he needed. 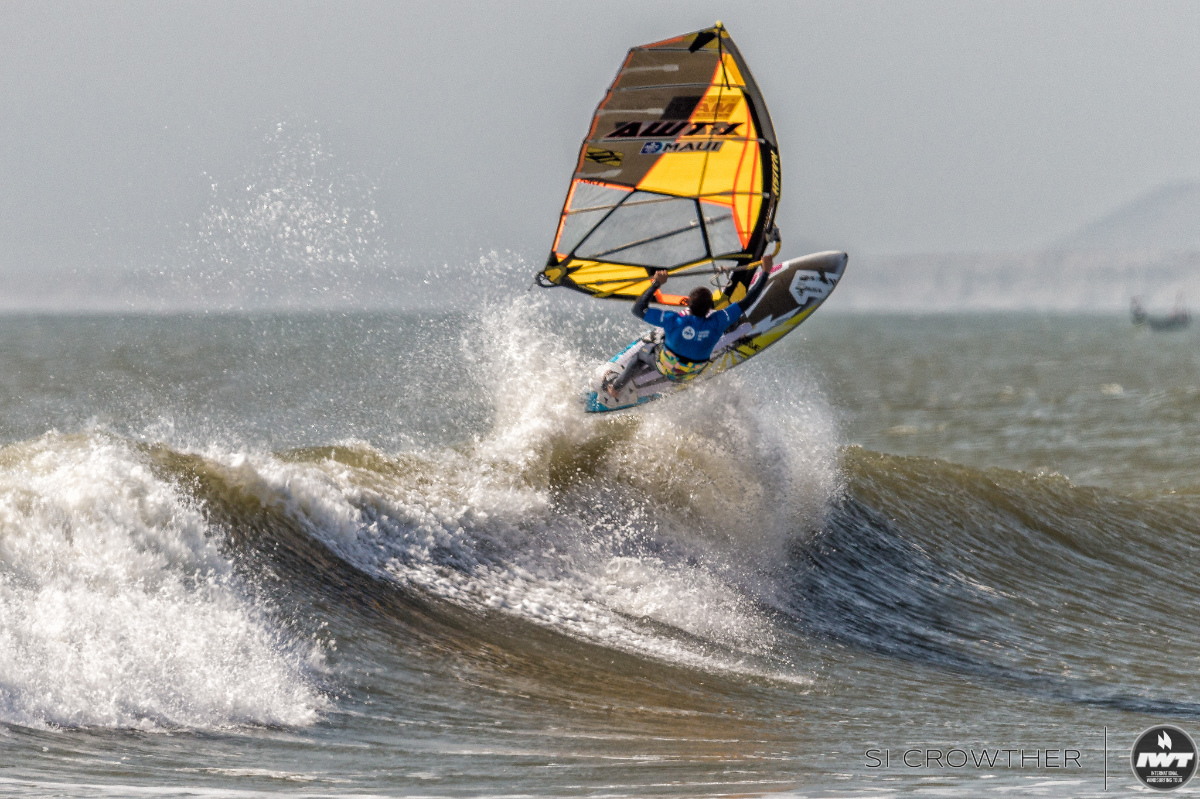 After a three heat break, the Amateur final moved up to the point with conditions now perfect- rising tide, solid wind, and logo high waves peeling for a kilometer. William Perez right from the start positioned himself in the dominant spot upwind, picking off the best waves with the help of a larger sail courtesy of Sam Bittner. Perez executed well and showed he has become quite a strong competitor. Tom Soltysiak managed to find some choice waves, but wasn’t able to position himself just right in the critical sections to execute his maneuvers. Joaquin Desriviers struggled with his smaller rig to find a wave to compete at the level judges expect from this talented young amateur. Raul Reiner sailed a solid heat, but wasn’t able to deliver the same pizazz of his younger competitors. Final results in order are William, Tom, Raul, and Joaquin.

Kevin Pritchard dominated the first heat of the Pro Men’s division managing to pick off some of the best waves, executing massive hacks in the critical sections and a couple of nice aerials on the wave. Chris Freeman showed great wave selection but struggled to make it to the critical section, delivering strong hits just a couple seconds too late. Yerko made the most of some decent waves with nice turns. 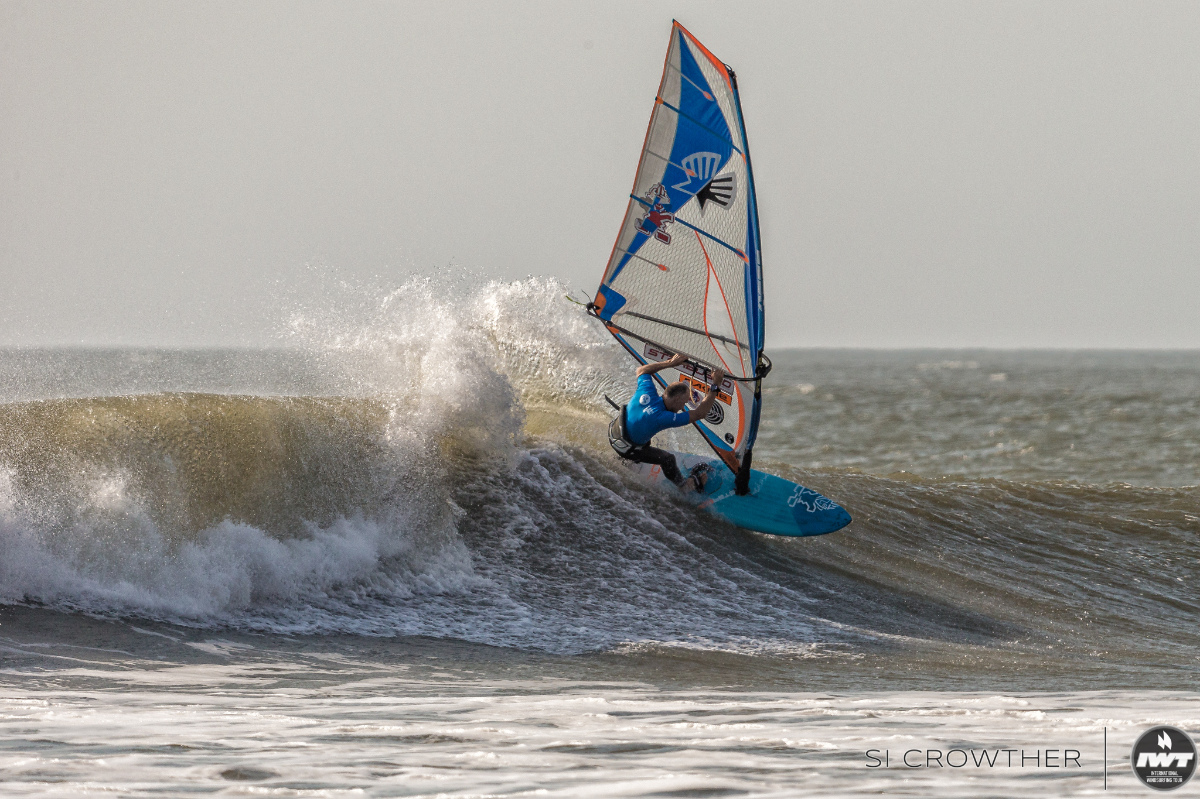 Heat 2 saw three relatively well-matched riders, making wave selection the determining factor. Yann managed to pick off some of the best waves to execute strong hits and a couple aerials. Russ Faurot had a powerful wave with great surfing turns but was then left working waves that just didn’t quite develop the size or length he needed. Alessio Botteri managed to find several nice waves landing a solid vertical, tweaked aerial right in front of the judges. 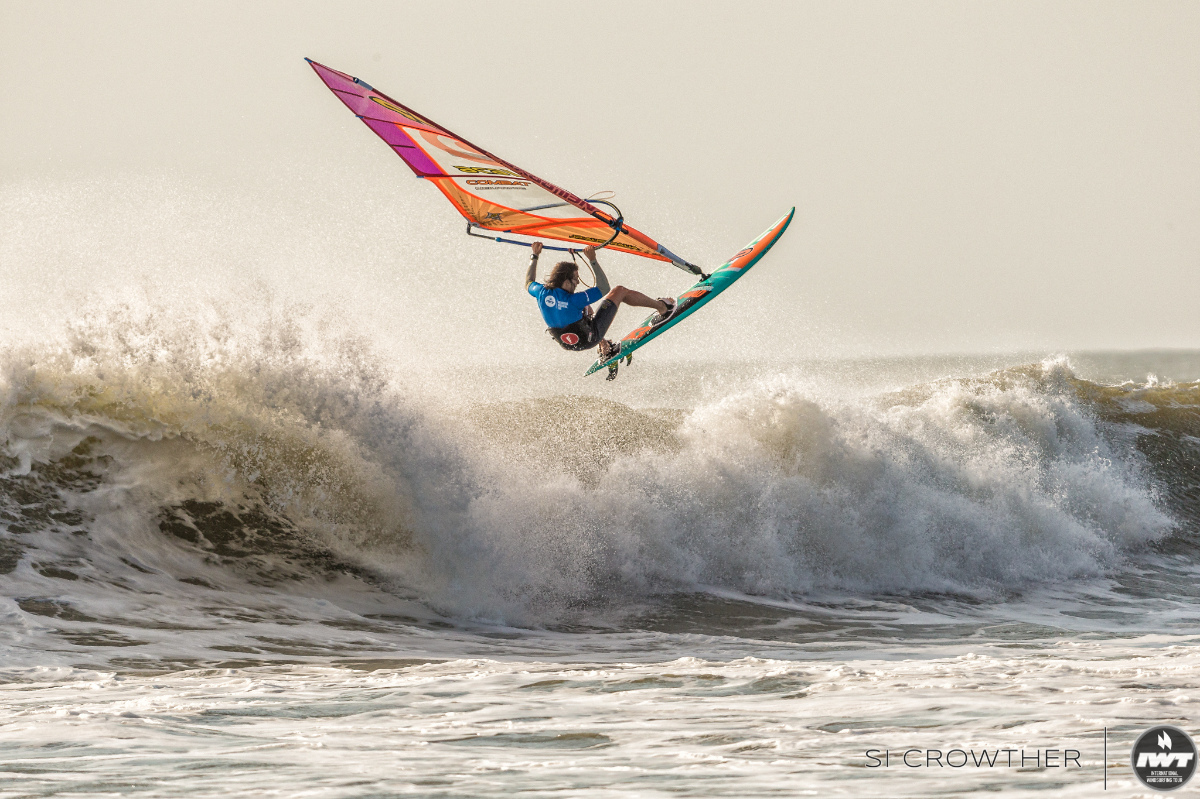 Federico Morisio took everyone by surprise in the 3rd heat, dominating on his second wave with three big aerials and one super vertical hit under the lip. Jad Ghosn and Maxime Fevrier battled it out for second, claiming back-to-back waves on a logo high set and giving the judges the perfect chance to compare styles. Fevrier edged out Ghosn, riding his best wave of the heat with one critical hit and vertical aerial. 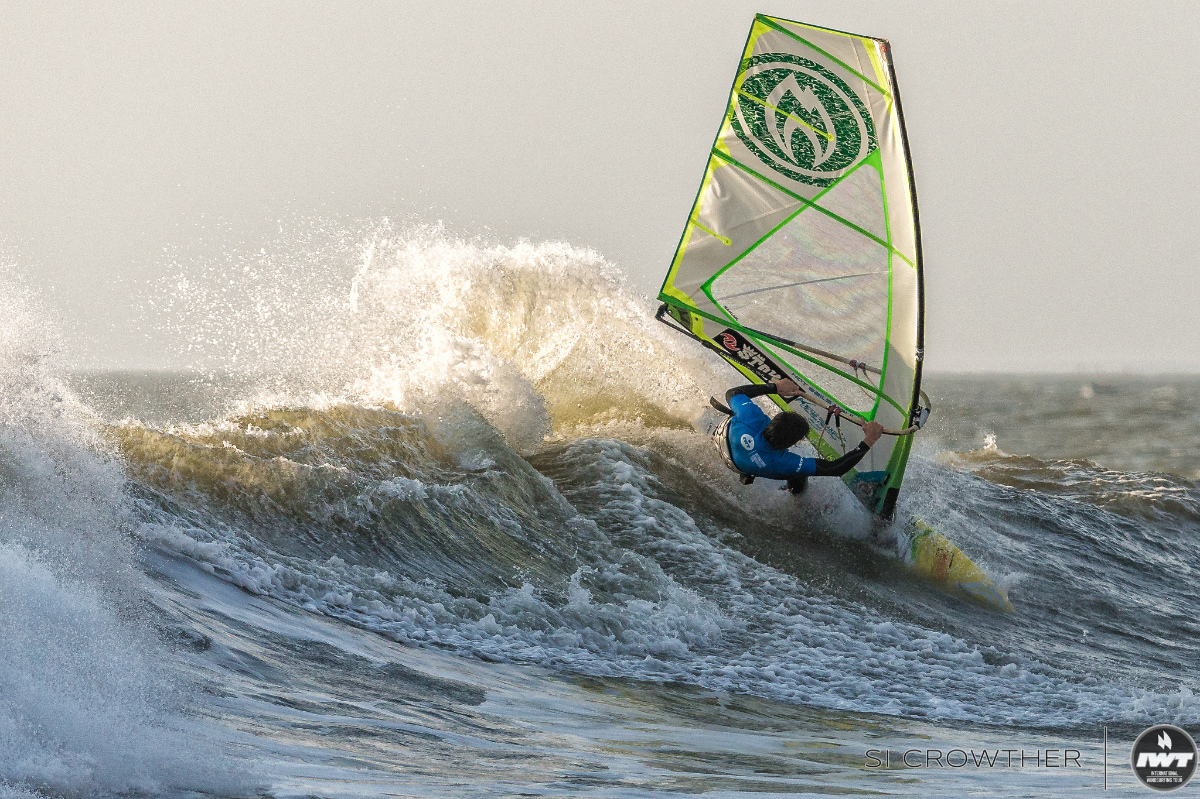 The final and most anticipated heat of the day saw the IWT’s leading Pro Morgan Noireaux take on emerging and talented Chilean rider Benjamin Fabre. Fabre has been drawing attention all week, throwing Goiters and Takas one after the other in preparation for the Pacasmayo Wave Classic. Noireaux’s best wave of the heat was his first, cutting far back onto the critical section then charging down the line for 7 big hacks and finishing off the wave with a massive aerial. Fabres’ third wave of the heat was his best with several nice hacks, working the wave, staying in the pocket, then wrapping the wave up with an aerial to charge down the line for a taka. Benjamin continued to grab wave after wave throughout the heat delivering solid hits and some nice aerials while Noireaux demonstrated his contest experience, opting to wait at the point for the best set of the heat. Noireaux and Fabres took the two final waves of that set- twin Hotsails delivering massive hacks and sending spray into the Pacasmayo sunset. Mike Archer opted to keep out of the Hotsails firing zone, staying on the inside and showing off his skill with a couple big turns then finishing his last wave with a big aerial attempt. 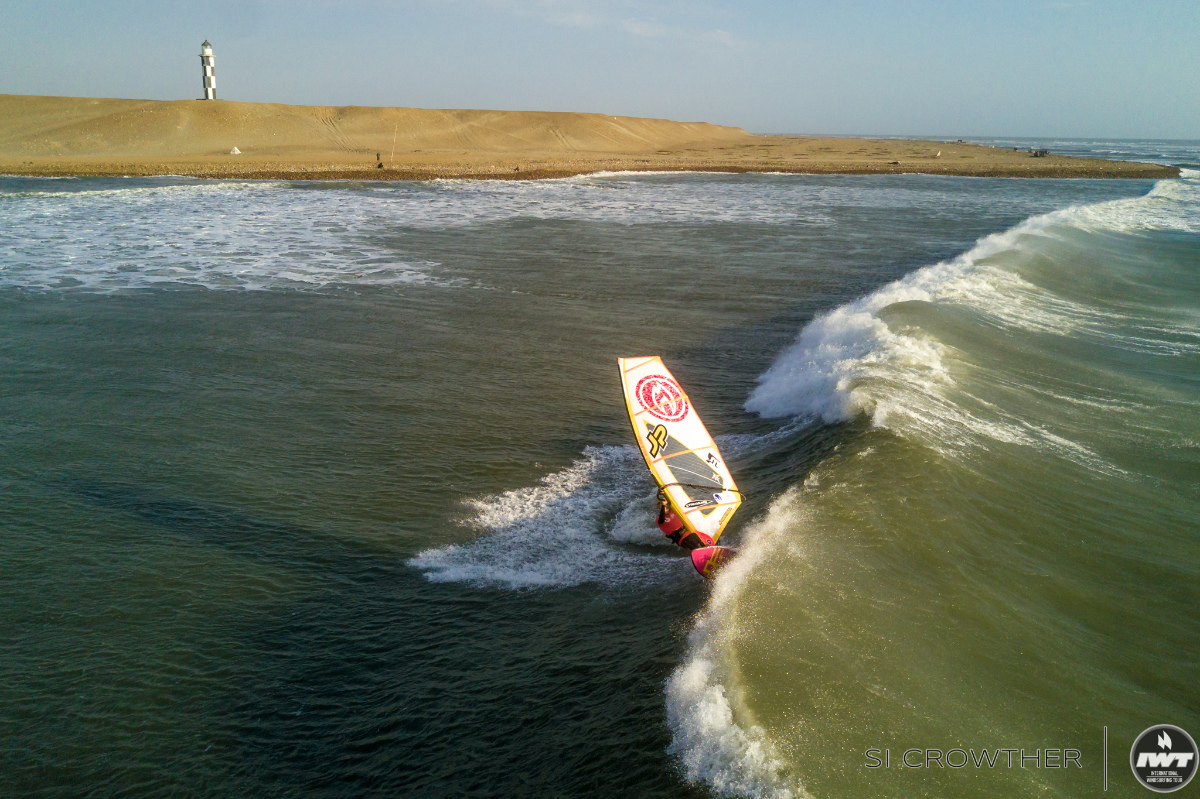 Round 1 of the pros ended the day, setting up an exciting final day as the swell is expected to continue. Everyone is excited to finish off another amazing Pacasmayo Classic. Stay tuned to our Facebook and Instagram feeds for updates throughout the day. Day 6 photo album can be found here. 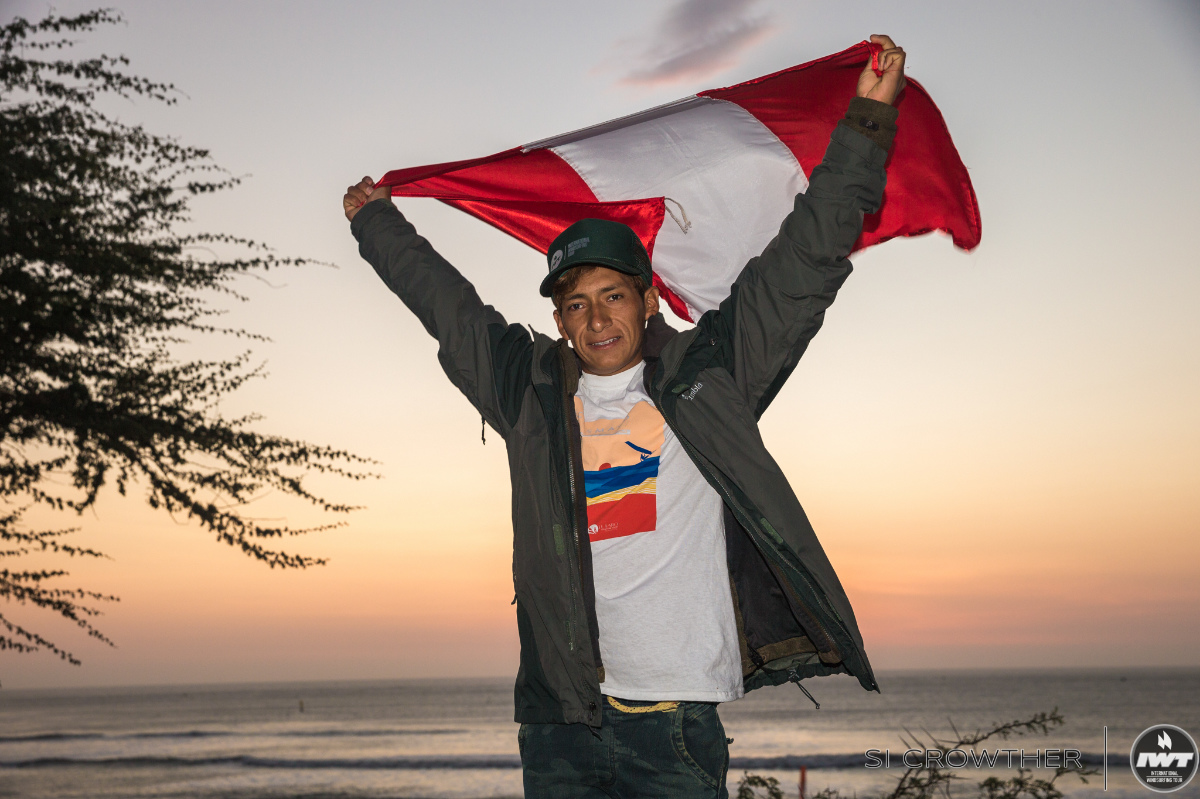