Head Judge Simeon Glasson’s patience paid off, with Pacasmayo’s reknown left-hand point break coming to life on the final day of competition. With set after set pulsing through the point, Pacasmayo offered up a dreamy canvas for riders to tear apart in a showdown on Finals Day. 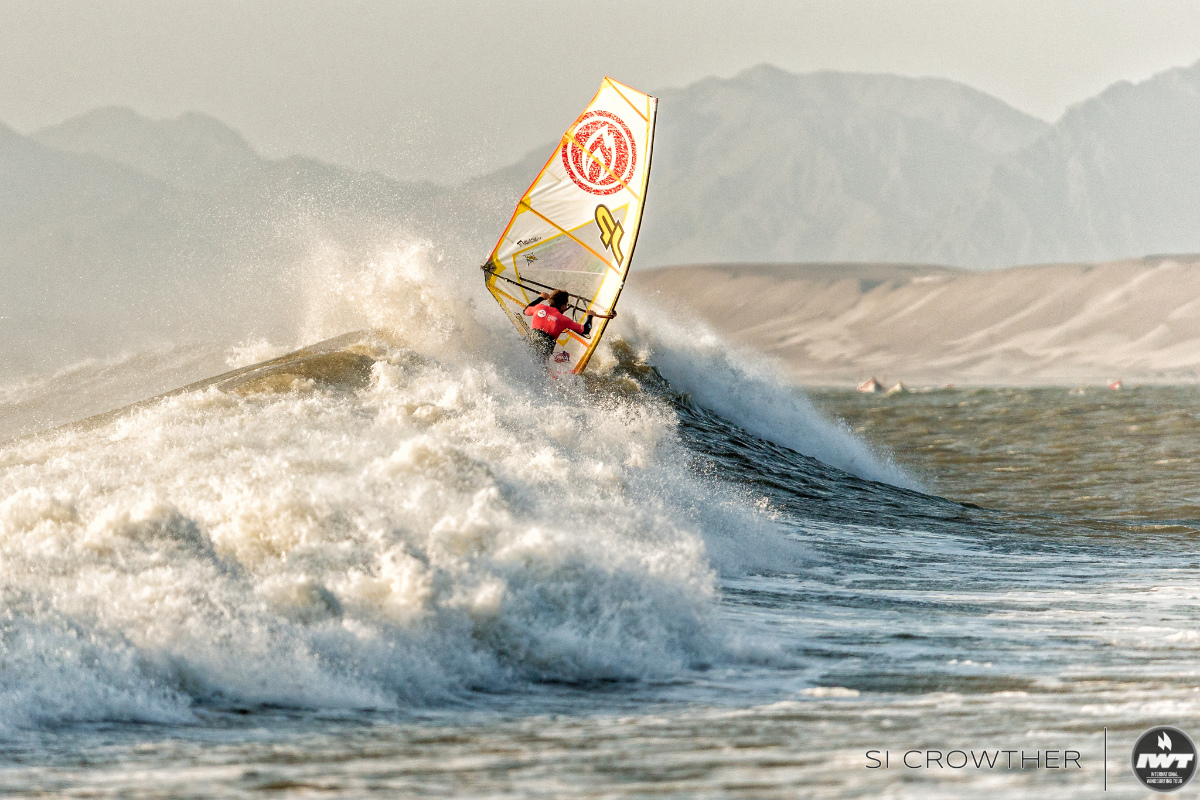 While waiting for the wind to kick in, IWT riders joined forces with Hazla Por tu Playa and local school children to clean up the beaches of Pacasmayo. The effort resulted in hundreds of kilos of trash being collected, and a great educational opportunity for the local youth regarding environmental consciousness. After the beach clean-up, the wind kicked in like clockwork, and competitors were ready to compete after a quick skipper’s meeting at El Faro Resort. 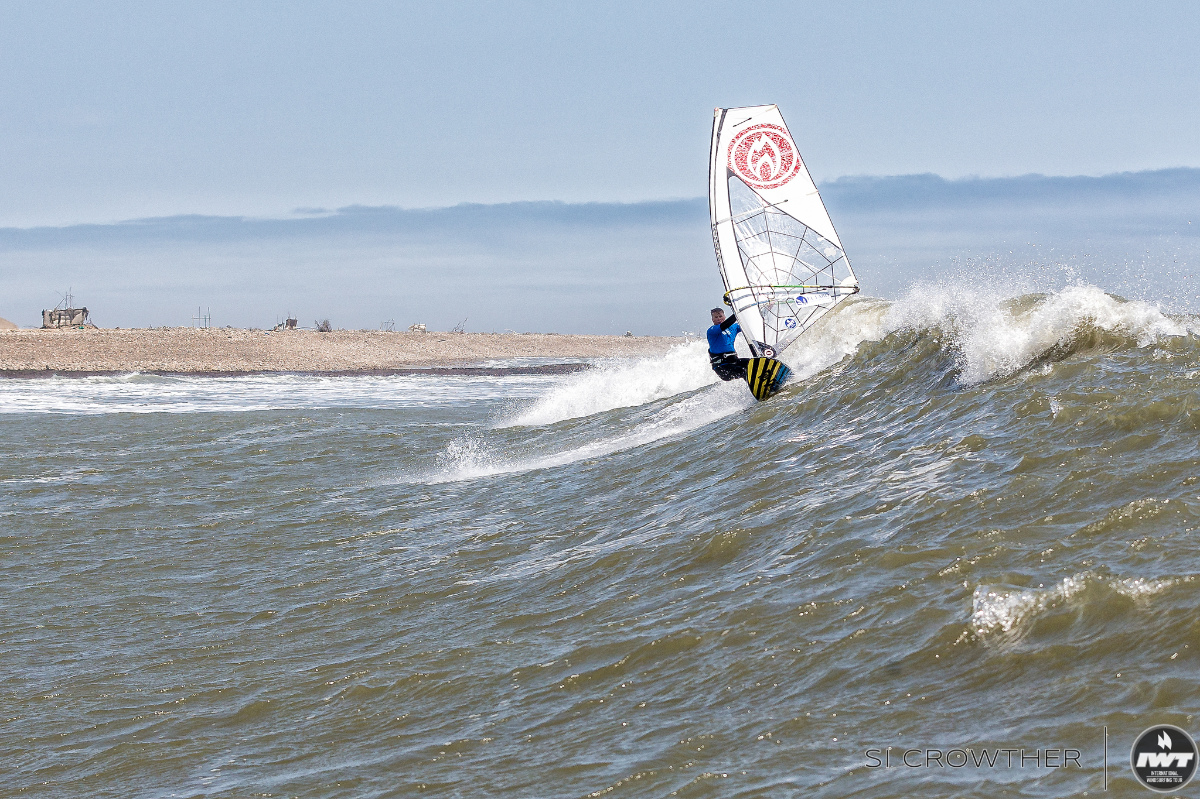 The Masters final kicked off proceedings, as Yerko Radovic, Peter Kimball, Simeon Glasson, and Jonathan Pooley hit the water in a fierce battle for the podium. Chilean Yerko Radovic drew first blood, carving up a set wave to set the tone for the day. Australian Simeon Glasson showed off his comfort-level sailing port tack conditions, picking off a risky wave deep at the point, and throwing some aggressive top turns as the wave walled up over shallow rocks to take the lead. Peter Kimball sailed a solid heat, with the larger swell offering him the opportunity to show off his fluid style on the face. Baja Amateur winner Jonathan “JP” Pooley got into the swing of things on his second wave of the heat, racking up points with a series of well-timed turns to cut into Simeon’s lead. In the closing moments of the heat, Pacasmayo delivered a large set for the finalists to rip apart. Yerko, Simeon and JP all impressed the judges with a combination of carving roundhouse top turns, late hits, and smooth bottom turns, riding their final waves all the way into the beach. JP in particular showed a great variety of maneuovers and criticality, earning the highest wave score of the heat, but ultimately it was not enough to knock Simeon off the top step of the podium.

Next up was the Pro Men’s repechage round, allowing those that did not advance out of Round 1 on Friday a second chance to battle it out for a spot in the semi finals. Local Alessio Botteri was unable to compete, having aggravated his ankle during the previous day’s heats, leaving Jad Ghosn of Lebanon, Mike Archer from England, and Chris Freeman from Maui in a tight battle for two semi-final positions. Jad impressed with powerful hacks under the lip to secure the win, showing he feels right at home competing in the Pro category, having moved up after winning the Amateurs in previous years. A split decision saw Mike Archer sneak into second place just ahead of Chris Freeman, also placing him into the semi finals. 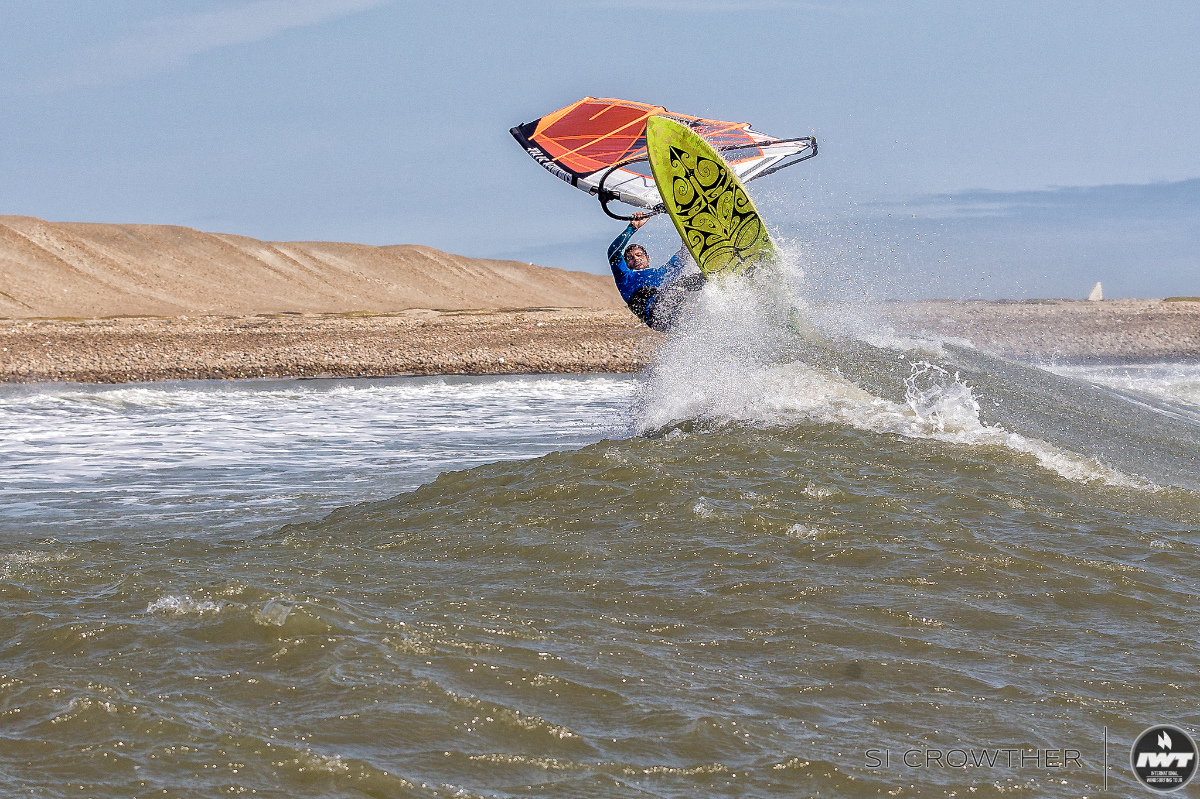 The second repechage heat pitted last year’s finalist Russ Faurot against Masters finalist Yerko Radovic, Frenchman and adopted Pacasmayo local Maxime Fevrier, and Chilean standout sailor Benjamin Fabres in a fight for the final 2 spots in the semi finals. Yerko was unable to match his performance from the masters final, leaving the door open for the others to book their spots in the semis. Maxime felt right at home in the firing conditions, combining big aerials together with a variety of turns to comfortably secure the win. Russ Faurot’s smooth flowing style combined with big boosty airs was just enough to see off the Chilean dark-horse in a tightly fought battle for second place. Benjamin impressed with his tight turns and aggressive hacks, even topping off a wave with a late taka, but ultimately his wave selection was his downfall as he didn’t have enough of a wall to work with in order to show off his talents. 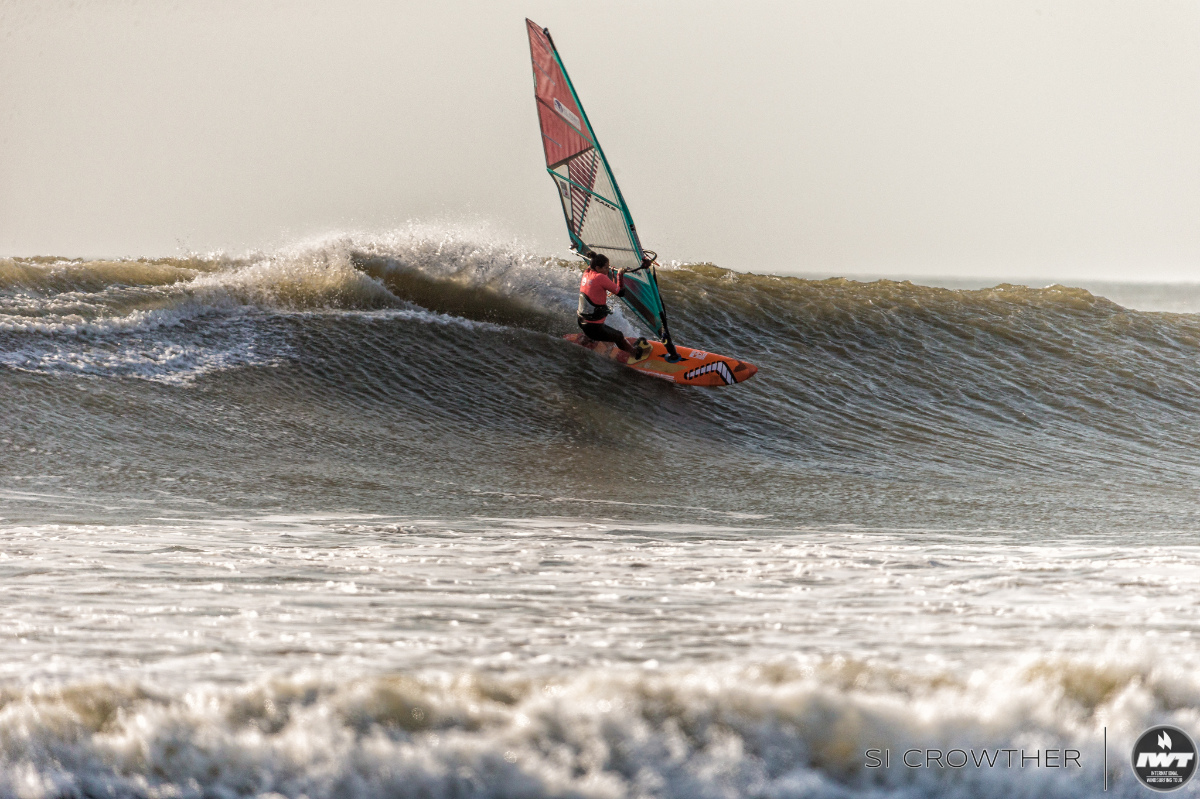 After the completion of the Men’s Repechage round, the women took center stage in their semi finals, with all sailors hungry to book a spot in the final four. In the first semi-final, young Senegalese-Italian Sabine Zola wowed the judges with her fearless attack, picking off some of the biggest set waves of the day and attacking the lip without hesitation. Maria Andres from Spain showed off her competition experience with aggressive, well-timed turns on a series of waves, consistently earning high scores on every wave. Baja winner Annamaria Zollett had a slow start to the heat, with a couple of smaller waves on which she showed her smooth turns, before picking up some larger sets in the closing minutes in an attempt to close the gap. In the end, the Italian had to settle for third place in the semi-final, allowing an interesting combination of youth and experience to progress into the final. 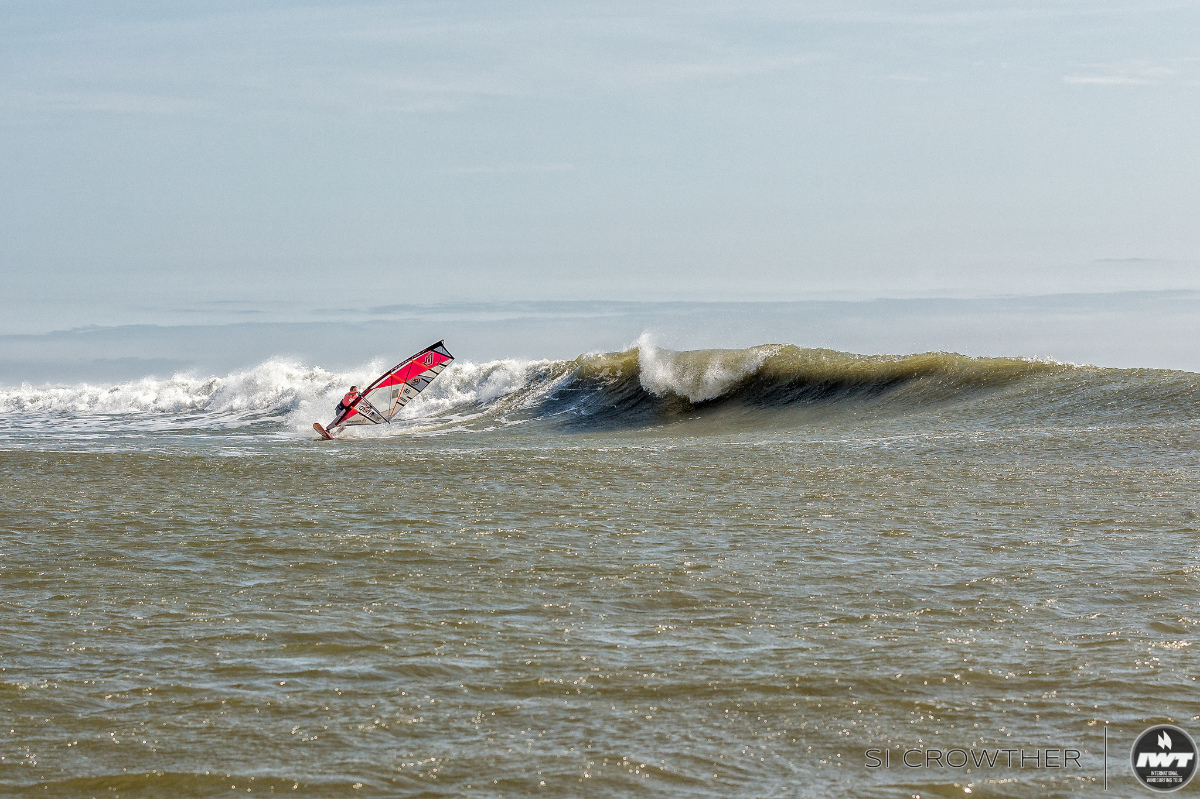 Women’s Semi-final 2 was one of the most tightly contested heats of the day, with all three sailors performing at their best in the pumping conditions. Chilean Bjoerte Purschel showed that she feels comfortable in the large swell, carving powerful turns under lips that others would have shied away from. Argentinian Leysa Perotti filled up the judge’s score sheets with 7 waves, with two solid waves to firmly place herself in the mix for a shot at the finals. Peruvian Bettina Gonzalez Zavala showed off her local knowledge of the Pacasmayo break, patiently waiting on the outside for the sets to come through, and executing smooth surfy turns on the larger faces of the three waves she did ride. After tabulating the scores, it was Bjoerte and Bettina who just edged out Leysa to book their spots in the final. 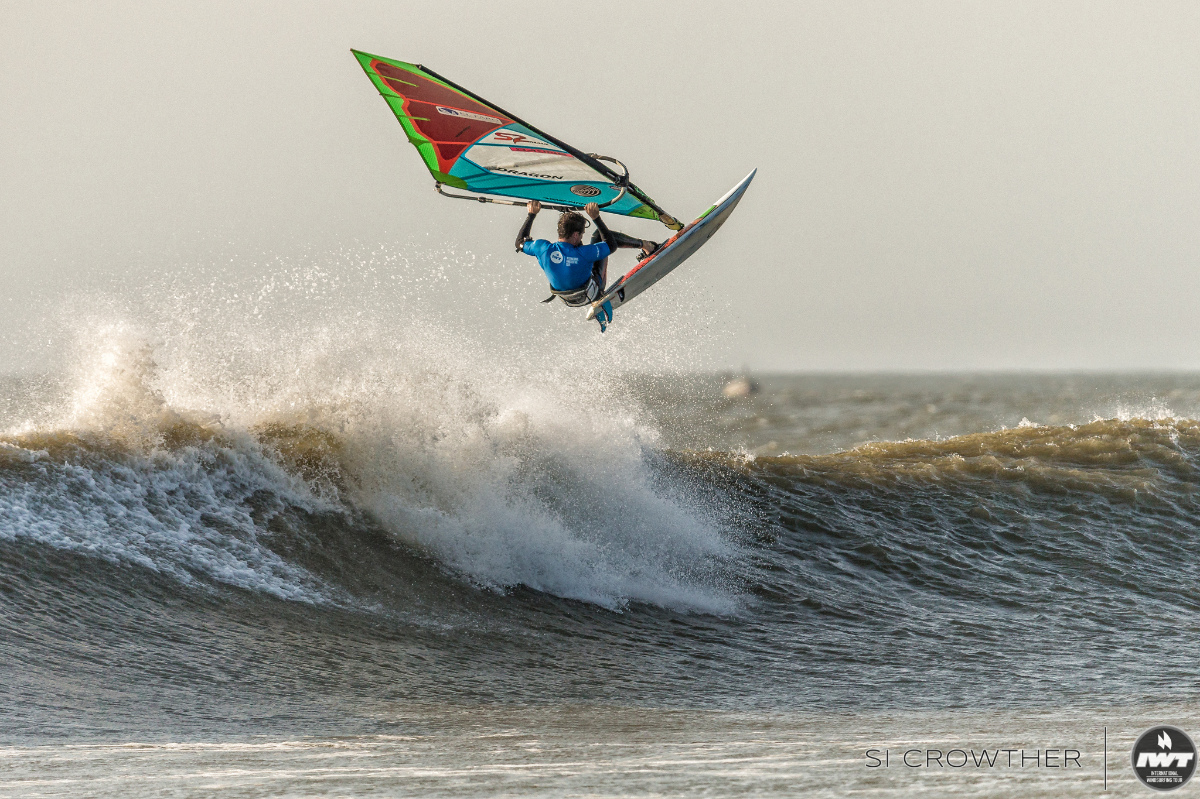 The Men’s Semi-finals pitted those that won their heats on Friday against the sailors who advanced out of the repechage round earlier in the day. In the building conditions, Pacasmayo’s walling sections offered the opportunity for the pros to throw aggressive late hits and huge aerials. The standout sailor from Semi-final 1 was Frenchman Yann Rifflet. His massive tweaked aerial off the biggest section Pacasmayo had to offer was the maneuover of the day, which he then followed up with a series of perfectly timed turns to finish off one of the highest scoring waves of the day, and safely booking his spot in the final. Jad Ghosn and Kevin Pritchard went turn for turn, with both sailors displaying their powerful style when attacking the waves but ultimately this was no match for Russ Faurot’s smooth flowing turns and perfectly timed hits, who ended up securing himself second place and a spot in the final. 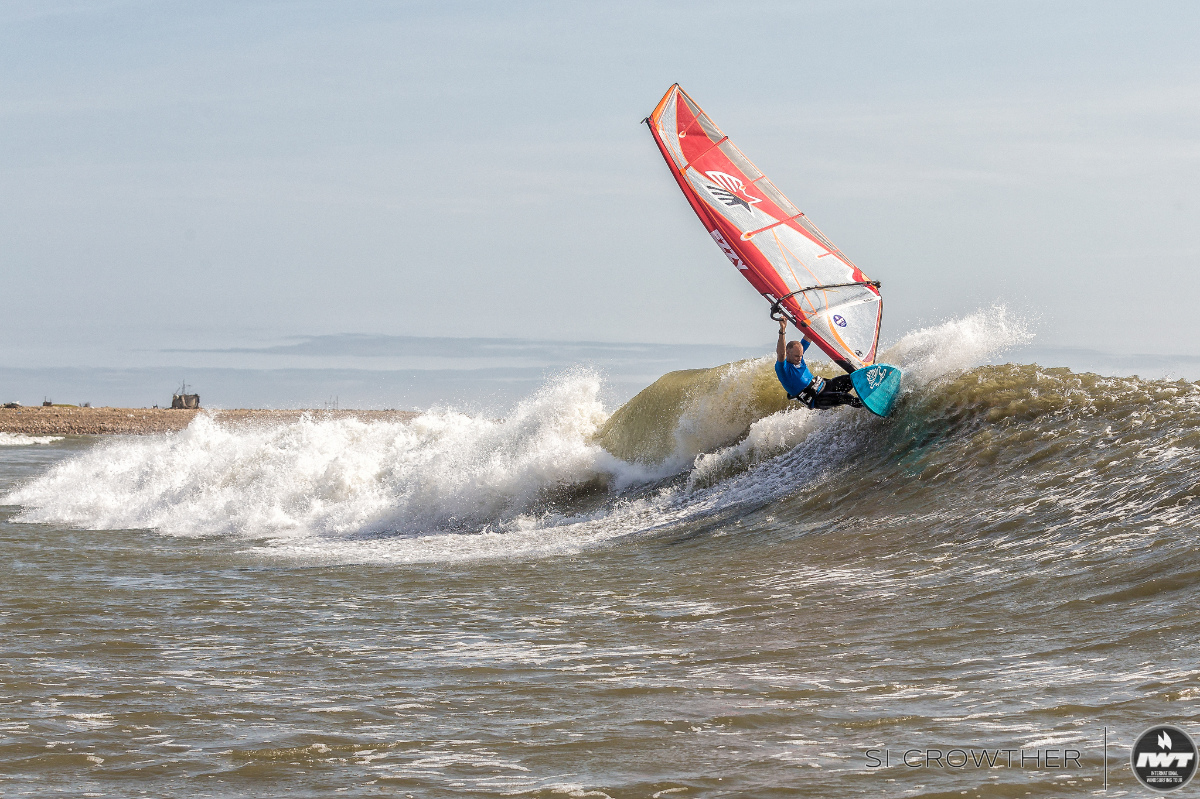 Semi-Final 2 was a chance for the young guns to battle it out for the two remaining spots in the final. Both Federico Morisio and Morgan Noireaux linked together a variety of maneuvers and aerials to secure their spots in the final, edging out Maxime Fevrier who put up a valiant effort, but was simply unable to match the power and flow of the young Italian and Hawaiian. Mike Archer put up a fight, having fought through a stomach illness in between his repechage heat and semi-final, but was not able to crack the top two and did not advance into the final. 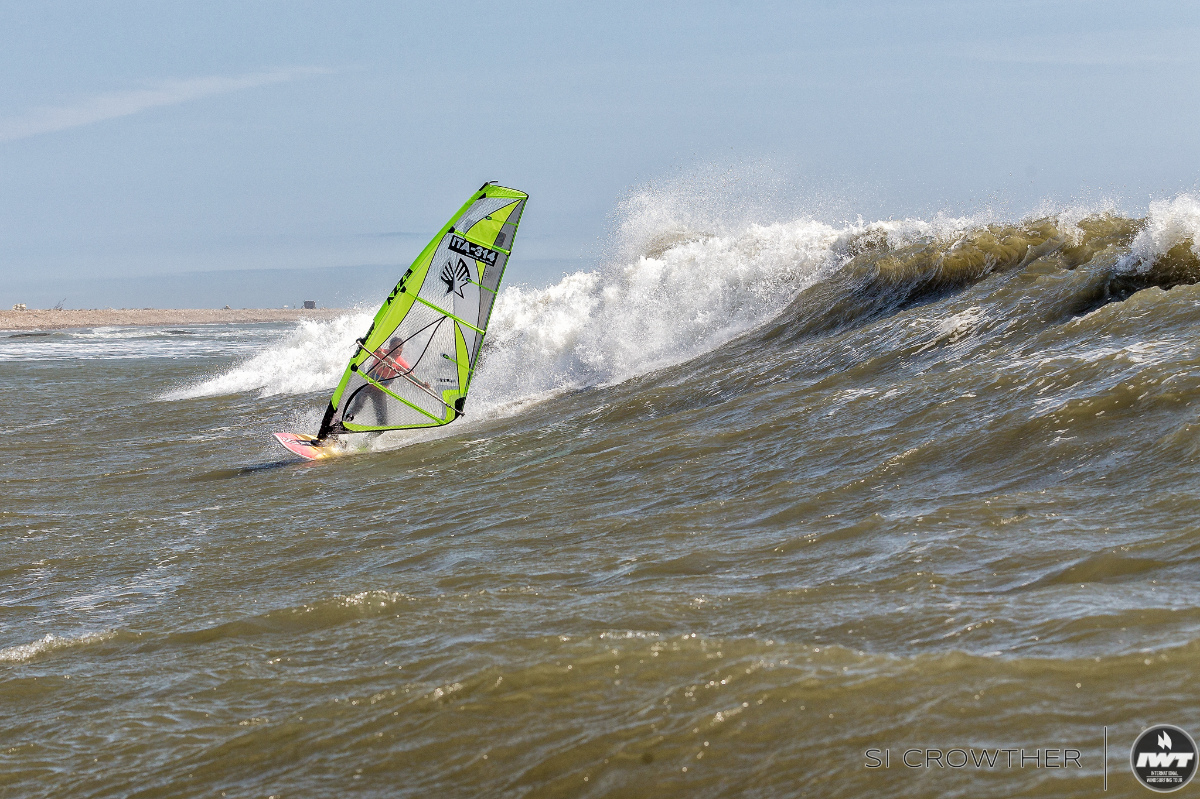 As the conditions continued to pick up late in the day, the stage was set for a final showdown in the Women’s and Men’s Pro fleets. The finals were extended to full half-hour heats, allowing all of the sailors the opportunity to pick off the best waves on offer from the increasing swell. 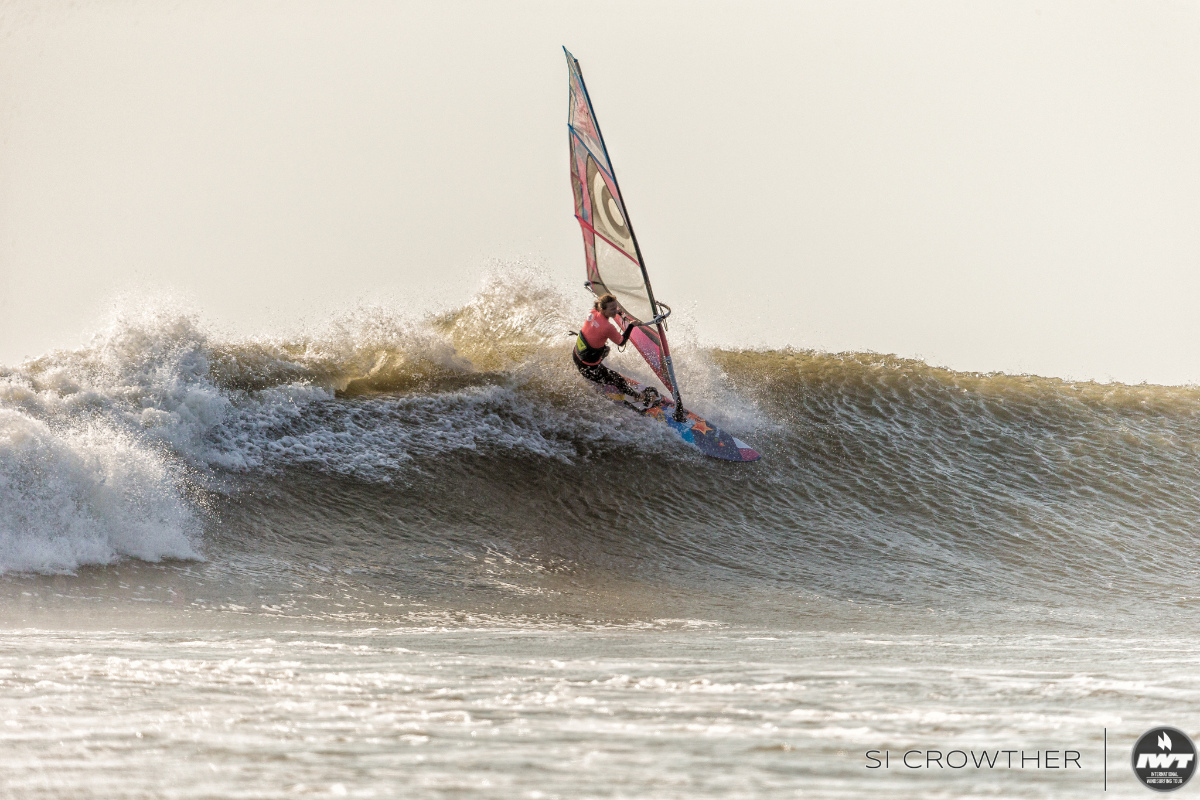 Sabine Zola’s fearless attack of the wave continued to impress the judges in the final, as she climbed big sections of large set waves, painting smooth lines all over the huge canvas Pacasmayo’s famed break was offering her. Bjoerte’s powerful turns were throwing buckets of spray into the setting sun, as her confidence increased together with the size of the swell. Maria Andres’s competition experience paid off as she displayed a master-class in solid wave riding, connecting vertical bottom turns with perfectly timed hits under the lip, projecting herself into the next maneuover with speed. Bettina’s local knowledge again allowed her to pick off one of the best waves of the heat, but was unable to find a second wave to her liking, placing her in fourth. With the remaining three sailors all displaying a mastery of the conditions, the women’s final proved to be one of the highest quality and most competitive wave-riding heats in the IWT women’s fleet. Upon final tabulation, all three sailors were closely bunched together, with Sabine earning her maiden win thanks to her critical hits on larger waves. Maria Andres finished in second place, and with Bjoerte stepping up into third. Bettina rounded out the top 4. 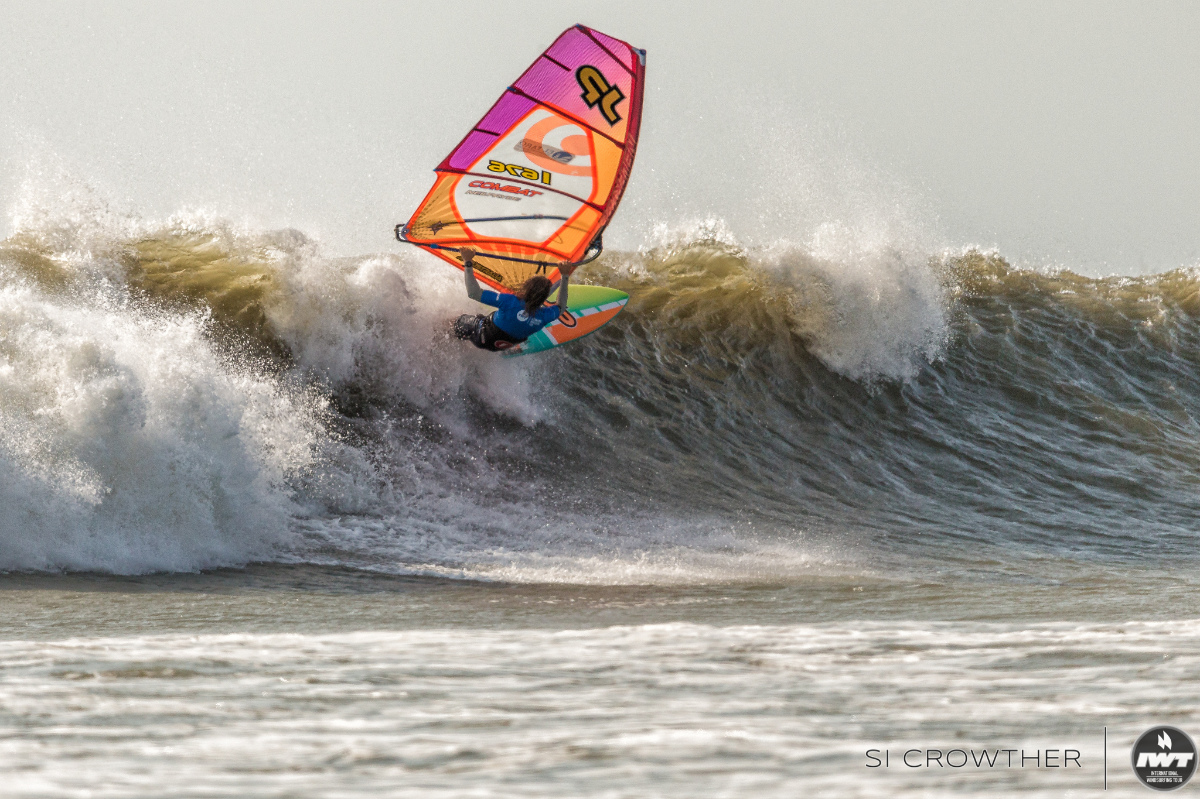 On the Pro Men’s side, the four sailors headed out into the setting sun for the final heat of the Pacasmayo classic. Russ Faurot continued with his smooth flowing style, earning a full set of solid scores for his big boosty aerials and smooth turns on waves he rode through completely onto the beach. Yann Rifflet sailed a solid heat full of tweaky aerials and late hits, but was unable to match his magical performance that earned his win in the semi-final. The clear standout sailors were Morgan Noireaux and Federico Morisio, who went head-to-head and wave for wave, both picking up great waves and sailing them to their full potential. Morgan displayed his trademark vertical ascent up the face, followed by powerful hacks directly below the breaking lip, as well as solid aerials and finishing off his second wave with a goiter at the end. Federico put on a show with his first wave of the heat, displaying a beautiful array of powerful carves, late hits, and controlled floaty aerials, all linked together with his smooth flowing style. Not finding another solid wave for the next 14 minutes of the heat, Federico was in the unenviable position of having the top scoring wave of the heat, but without a high-scoring second wave while his competitors were racking up points. At last, his patience paid off as a large set reeled off across the point, with Federico putting on another masterful display to best his previous wave, earning himself the highest wave score of the heat, and ultimately securing his maiden victory on the IWT. Morgan Noireaux had to settle for second place, and Russ earned his second career podium finish, stepping up to pick up third place.

As the sun set on the 2017 Pacasmayo Classic, the awards ceremony took place back at El Faro Resort. As the waves continued to pump through the night, the pulsing beats of DJ Gary had all of the competitors celebrating yet another perfect week in Pacasmayo, and all were looking forward to yet another day of Pacasmagic.

Full Facebook albums of the Pacasmayo Classic can be found here.

Text by Tom Soltysiak and photos by Si Crowther. 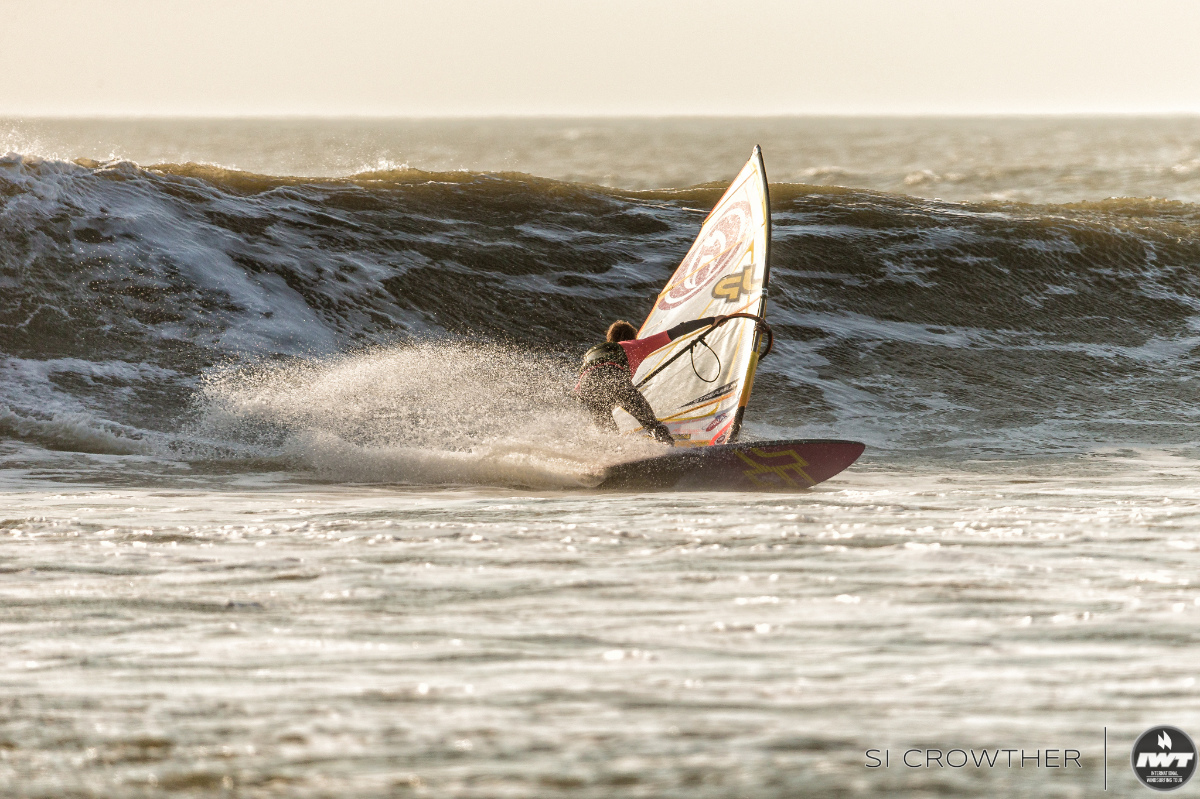 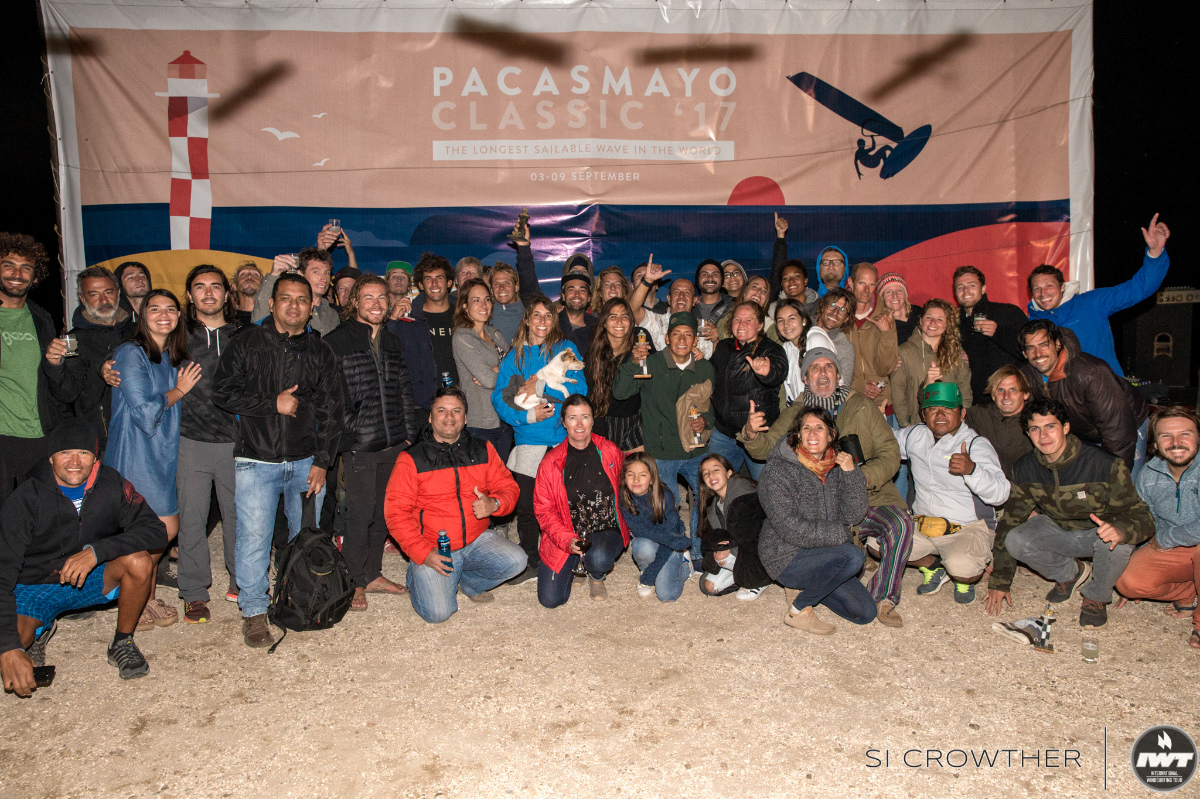 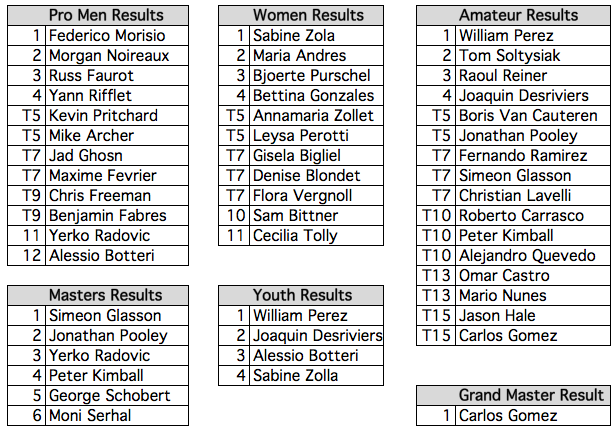