Finals Day at the Pacasmayo Classic

The sun rose on the final day of competition to reveal stunning logo high waves peeling off the point. Smaller than the huge day before but pure Pacasmayo perfection nonetheless. We had 9 heats to get through for full results including the Pro Men’s semi finals and final, Pro Women’s final, Amateur semi finals and final, Youth Boys final, Masters final.

The reduced swell dramatically decreased the very strong current that forced long heats the previous day so the format returned to 18 minute heats with 2 minute transitions. Two best waves to count as usual. 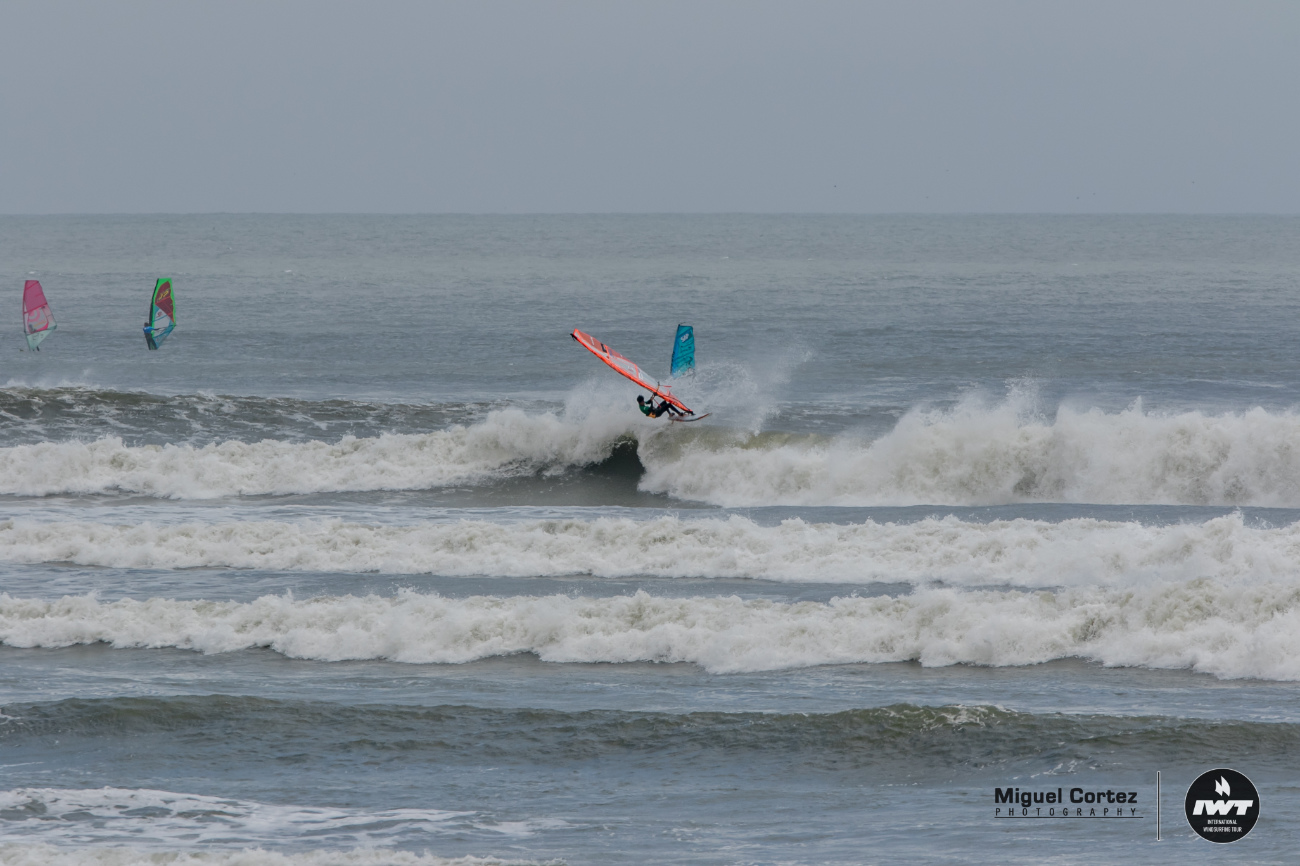 The first Pro Men’s semi final hit the water with Federico, Maxime, Takara and Russ. The standout riders were Federico (13.5 average heat score) and Maxime (13.1 average heat score) both riding every wave ferociously to claim their spots in the coveted final 4. Takara and Russ couldn’t find the magic of previous high scoring heats. Takara in 3rd means =5th for the event and Russ in 4th means =7th.

The second Pro Men’s semi final saw Morgan, Antoine, Yoan and Joaquin. The rippers were Morgan (15.1 average heat score) and Antoine (12.2 average heat score) who took the two remaining finals berths with extremely critical hits. Morgan especially was on fire in this heat. The light winds and logo high waves meant his wave riding and power surfing style was dominating. The light wind meant Antoine was not able to use his radical goiter aerial game. Without that Morgan has the advantage with his stronger wave riding. These two spectacular riders are having an incredibly impressive tussle for the overall tour title this year and it’s coming down to this difference and how each can use his strengths best in the conditions available for their finals. Yoan was 3rd so ends the event in =5th place with Takara, while Joaquin 4th ends in =7th place for the event with Russ. 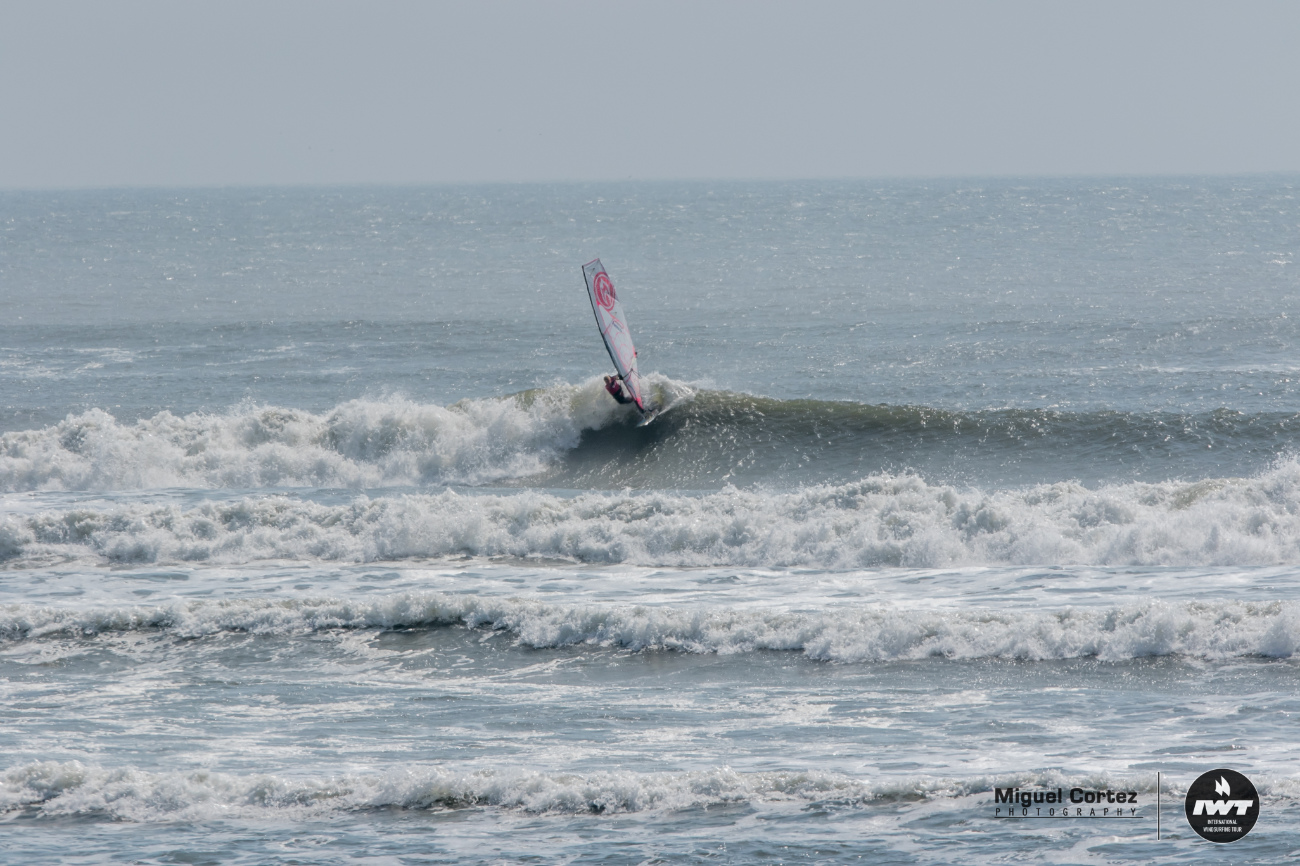 The Women’s final was started but cancelled half way through due to a temporary drop in the wind that saw it glass out and become unmanageable after a first wave. This put a 2 heat pause (40 minutes) in proceedings while all riders were called back to the beach for that heat and the next to regroup and wait for the wind to settle back in.

The wind came back in fairly quickly and this time looked settled for the rest of the afternoon so the Women’s final was back on with Sarah, Jessica, Lina and Maria. Wave scores were moderate for all riders until they got onto their 3rd waves with the best sets coming through mid heat. This is when Jessica and Lina burst out from the group. Jessica had a flowing and powerful 7.5 ride and Lina scored big with a super impressive 8.7 coming from some very critical and powerful hits on the biggest wave of the heat. These were the game changing rides. Sarah and Maria were unable to find matching wave scores. As the riders returned to the beach the crowd was cheering them all for the very high standard of power riding on display. This was a very tough final and it had been very hard to reach it with such a strong field of women this year. Lina was the victor with the most powerful and critical riding of the group (15.0 average heat score). Jessica’s world champion power and grit were still on show against her younger rivals taking her to second place (12.1 average heat score). Sarah’s super stylish bottom turn top turns were not at her critical section best this heat and she was 3rd (6.9 average heat score). Maria close behind in 4th also struggling to repeat her best performances in earlier heats (6.3 average heat score). This was the highest ever overall wave riding standard for women at any IWT event outside the Aloha Classic. A very promising sign. 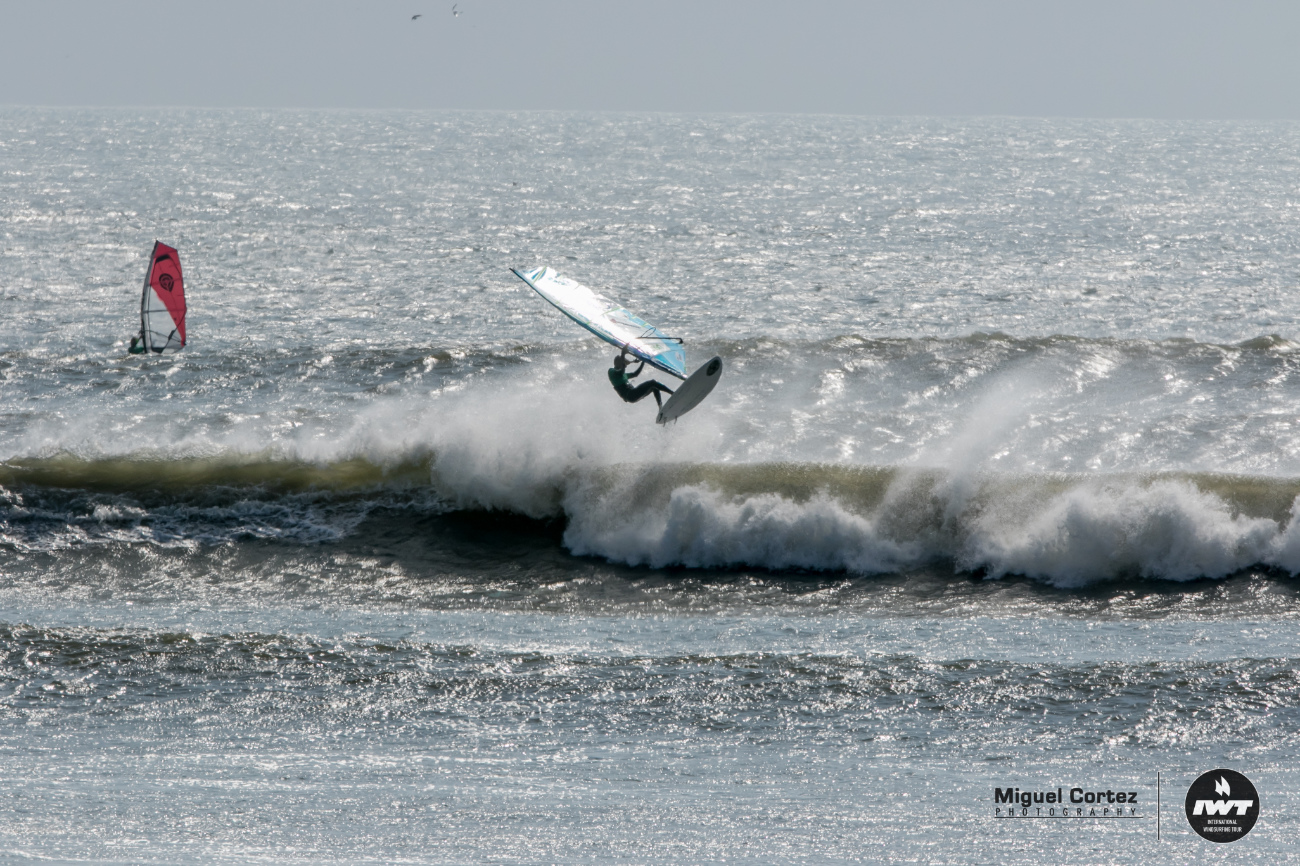 The Masters final saw Simeon, Francesco, Raoul and Adrian line up. They had been waiting patiently for the Pros and Women to do battle and now was their turn. All of these guys have been tearing it up throughout the week, so you knew the standard would be very high. Adrian opened up the heat with a bit of a sneaker inside wave, while the others waited out the back for sets. This inside wave lined up perfectly and gave Adrain section after section to hit. He rattled off at least 6 solid turns before kicking out and heading back to the lineup with the others. Starting the heat off with a 7 on an insider was a big advantage, as now he had time to wait for the truly good wave. When the next proper set arrived, all riders had an opportunity. Simeon grabbed one of the better ones and racked up some good points (6.0). Adrian however was a man on a mission and he grabbed the biggest wave and tore it to pieces. Big power turn after big power turn, while also mixing in a floaty aerial earned him the score of the heat, reaching the excellent range (9.1). Francesco and Raul were solid as well, both scoring 5s from that set. The rest of the heat was more difficult, but Francesco managed to find 1 more high scoring wave to earn second position ahead of Simeon. Raul was not far behind coming in 4th place overall.

The Youth final was next, which featured 2 pro riders in Takara Ishii and Joaquin Desriviers. Simbad Lamanuzzi has been sailing extremely well also and was the other rider involved. Unfortunately Alessio was unable to make the final as he had to leave the contest early, so it was a battle for the top 3 positions. Takara and Joaquin put on a great display of wave riding showing why they truly deserve to be Pros as well. Each of these guys picked off set waves sending big aerials and carving critical turns. Simbad is a bit younger and doesn’t quite have the arsenal of Takara and Joaquin, but he has shown great potential throughout this event, and is sure to be a force to be reckoned with in the future. Simbad knows which waves to take and has a very nice style, but hasn’t quite nailed the critical moves yet. Takara was able to grab the first position ahead of Joaquin (2nd) and Simbad(3rd). 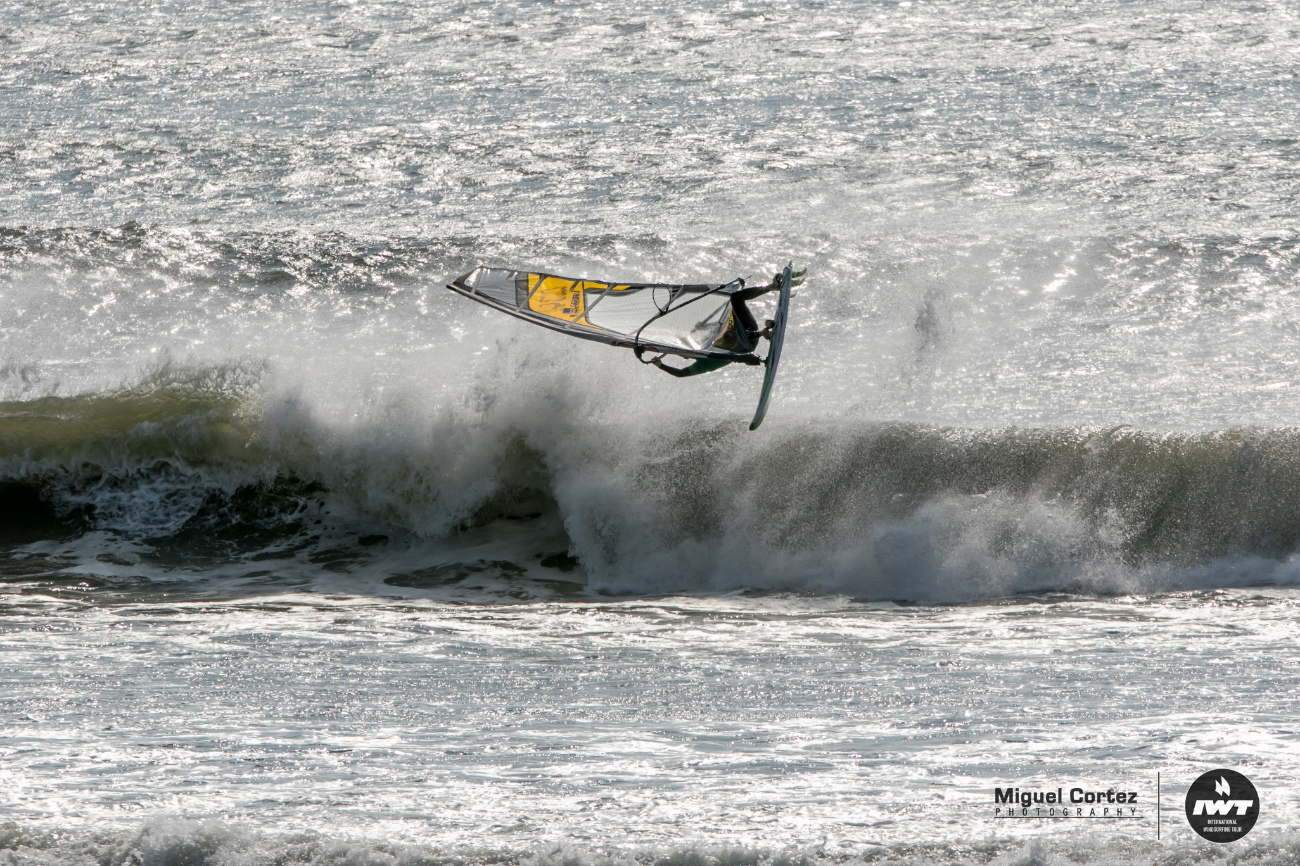 Next were the amateur semis. The first heat saw 2 masters, Simeon and Francesco, battle it out with Australian Zack Coleman. Simeon and Francesco had already sailed their Masters Final in which Francesco had just edged out Simeon for 2nd place in that division. This heat was again a tight battle and Francesco just nudged Simeon for first place. Zack suffered from an equipment malfunction costing him precious minutes. Luckily for him women’s 2nd place winner Jessica Crisp was on the beach ready to go with another rig and sailed it out to him allowing him to finish his heat. Still, Zack was unable to catch the other 2 and had to settle for 3rd place in the heat.

The second semifinal had father/son duo Felipe and Simbad Lamanuzzi, as well as Tom Ben-Eliyahu and local Peruvian William Perez. William struck first in this heat and didn’t look back. He scored 2 waves averaging in the excellent range to take the win. Felipe wasn’t far behind grabbing a couple long point waves to score well enough to grab 2nd. Simbad and Tom both struggled in this heat as the wind became a little bit light and sets were harder to find. 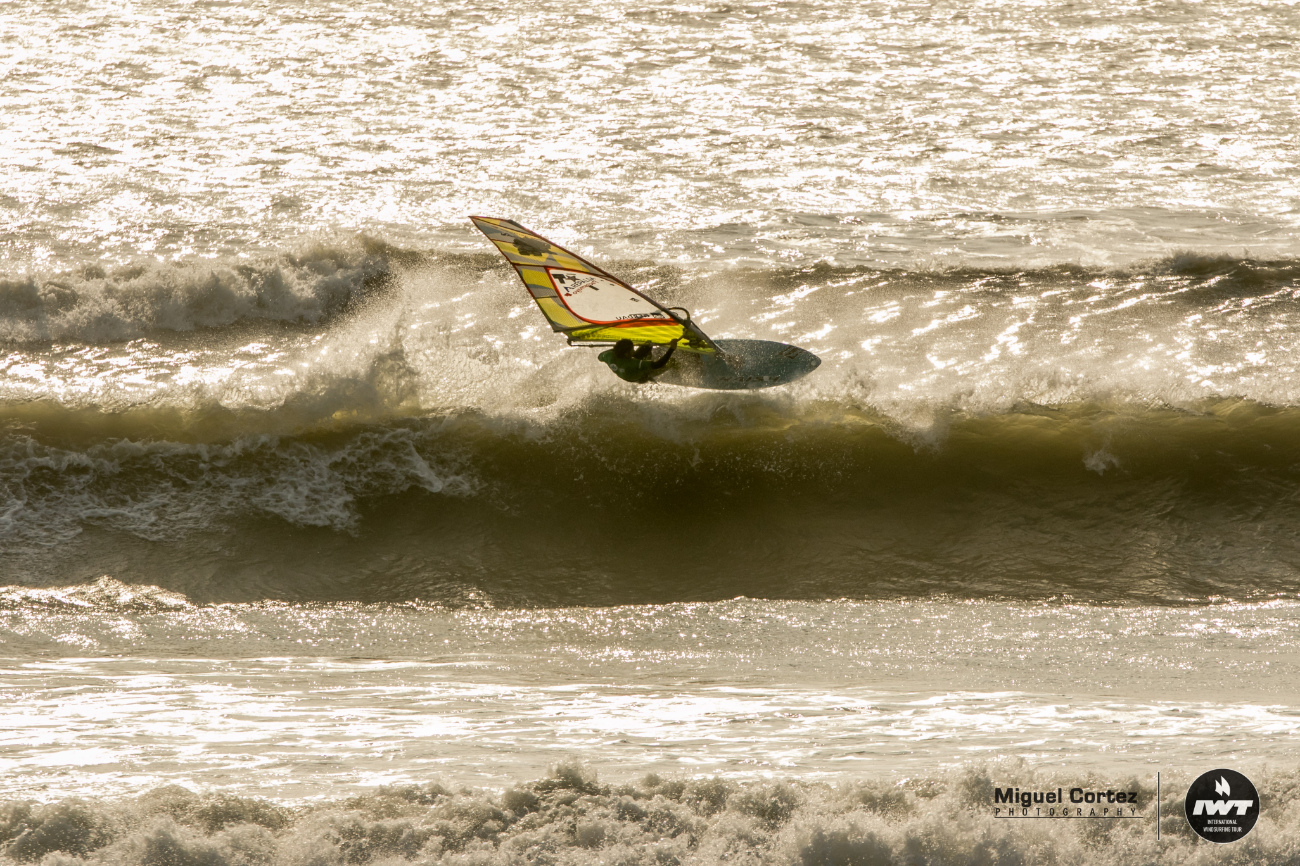 The Amateur final was now set, and it was sure to be an epic battle. William, Felipe, Simeon, and Francesco were ready. The wind turned to a more favorable side-off direction and the sets kept coming. Once again Simeon and Francesco were matched in a heat and this time it would be Simeon coming out on top. He managed to find slightly better set waves, and carved them up with his usual style and power. Simeon earned 2nd place for his efforts and Francesco came 3rd this time. William stole the show again finding the best waves and throwing power turns mixed with big aerials to solidly win the amateur bracket. Perhaps next year we will see William in the Pro bracket where he may very well be the man to beat there. Felipe had a little more difficulty in this heat and was relegated to a respectable 4th place result. 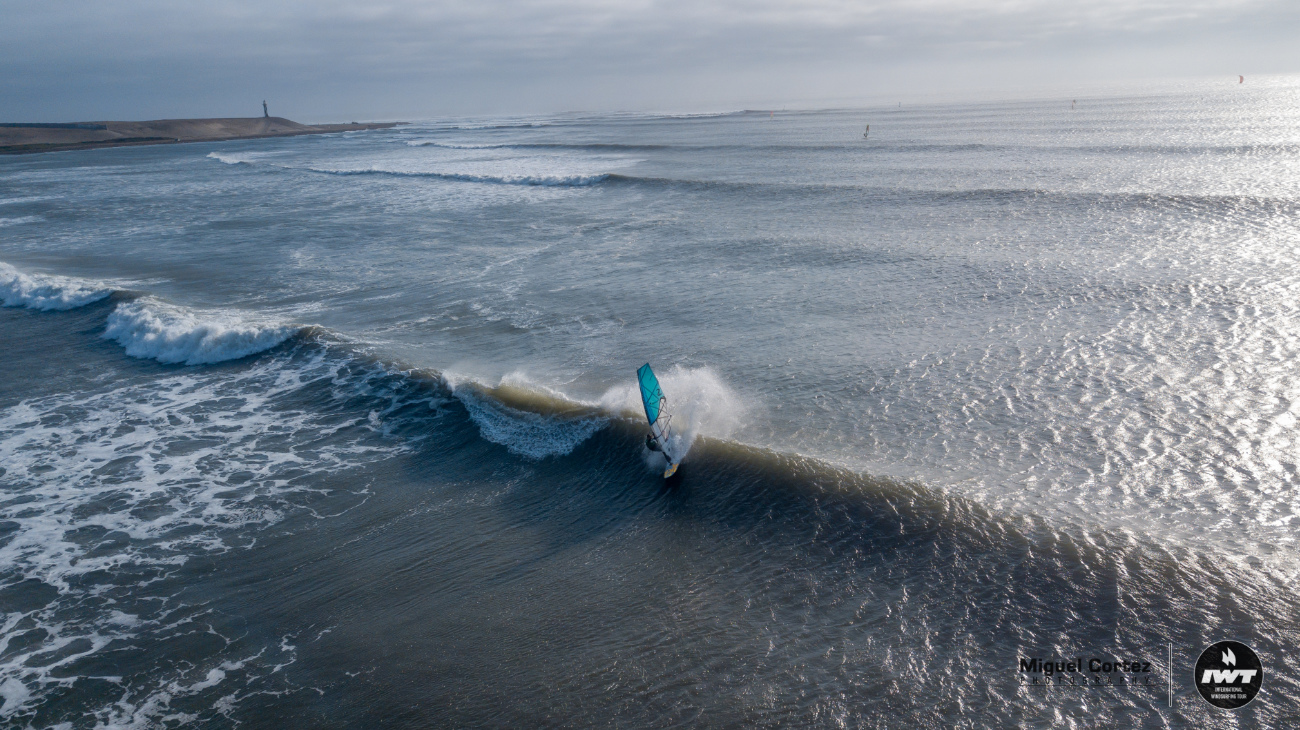 The Pro mens final somehow managed to get the best conditions of the day, and the riders did not disappoint. The battle between Morgan Noireaux, Antoine Martin, Maxime Fevrier, and Federico Morisio was one not to miss. Each of these guys has been tearing it up throughout the week and it was no surprise that they made it this far. The opening of the heat started with a bang. All the guys caught set waves and tore them to pieces. Maxime won the opening exchange scoring an excellent 8.8 for his efforts. Morgan, Federico, and Antoine all scored well in the 6 and 7 point range to remain close. The middle of the heat saw the guys trading wave after wave and all looking very on point. The display of power surf/wave sailing was impressive to watch. The perfect timing with which they hit the lip is on full display as the fan of spray is thrown behind each turn. The second half of the heat saw Antoine (Titoun) Martin really turn it up a notch. He chose a set wave, mixed in some beautiful turns and threw down a perfectly timed goiter in the critical section to score a 9.5 and take a strong lead. Titoun then followed this up with an equally impressive wave and finishing it off with 2 clean goiters to seal the win. Morgan did his best also landing goiter, for high marks, but wasn’t quite able to match. Federico stuck to the power surfing, hitting big lips and throwing aerials, but didn’t have the trick and was stuck just behind the others. This was a very difficult heat to judge as all the guys were ripping. It was a pleasure to watch such a high level of windsurfing at such an amazing wave spot. The top 4 in order were Antoine, Maxime, Morgan, and Federico.

It was a great end to great contest, which was celebrated well into the night at the closing party. Next up is Chile in just a few short weeks. We hope to see many new faces there and of course, many familiar ones. 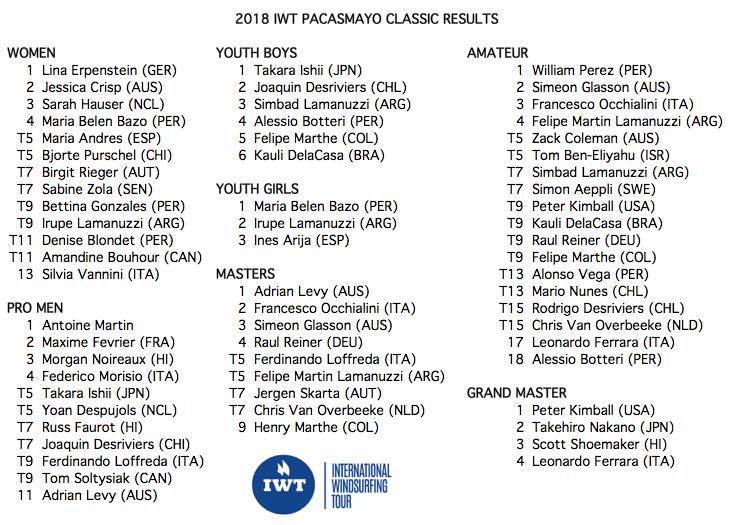 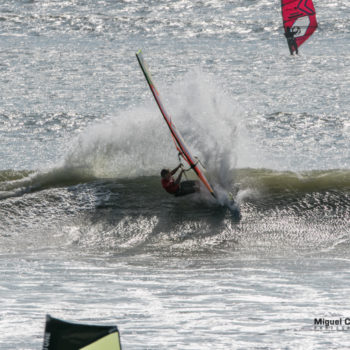 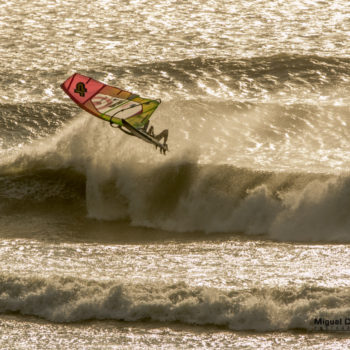 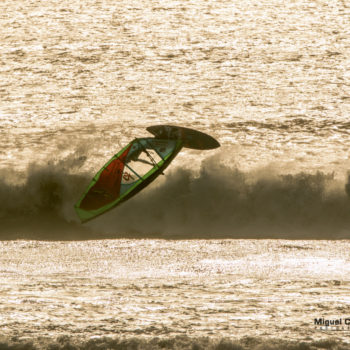 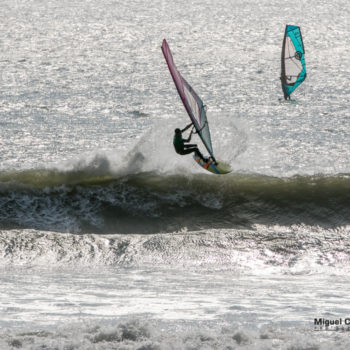 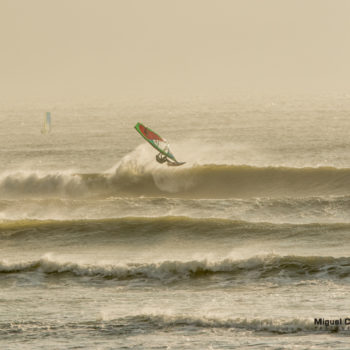 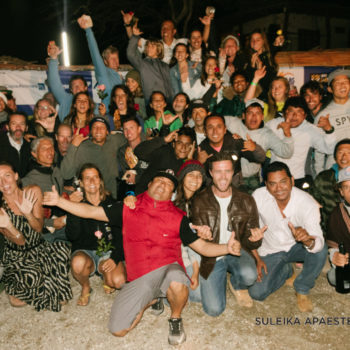