The last day of the contest window for the 2017 Pistol River Wave Bash brought success. Pistol River delivered when it counted for the 8th year in a row! Head Judge Simeon Glasson called an early skippers meeting of 8am at hosting hotel Inn of the Beachcomber. Riders were bright eyed and bushy tailed eager to get on the water. 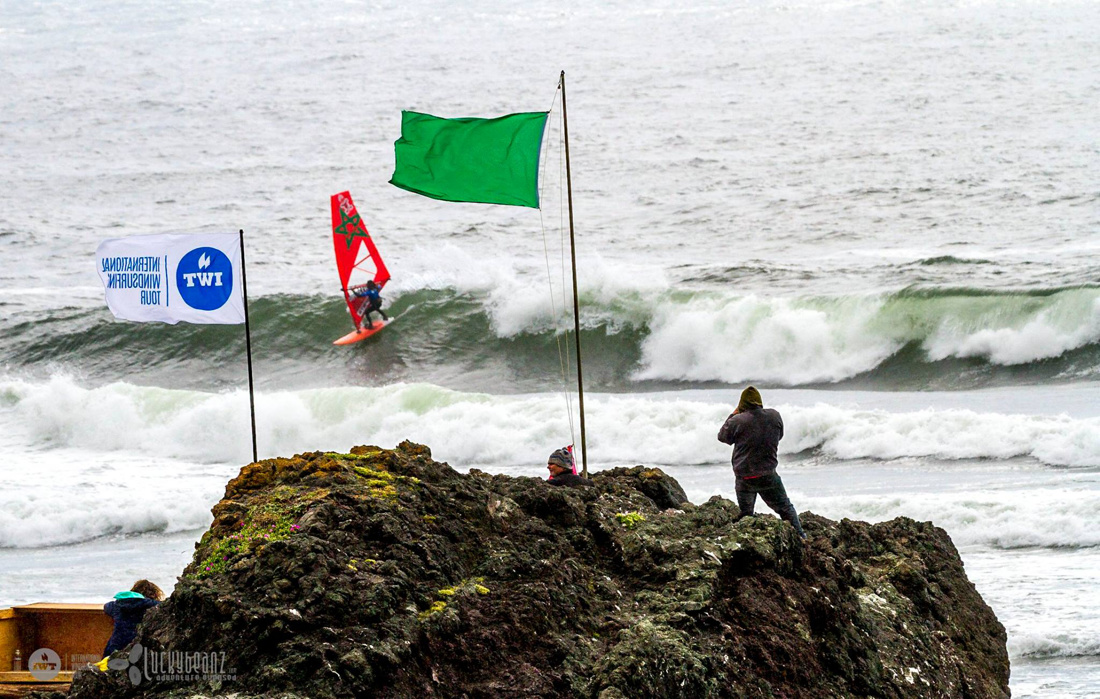 The wind built throughout the morning hours with the first heat of amateurs hitting the water at noon. With a repechage bracket format, all riders were to sail at least twice. Making his mark on the water in the first heat, Oregon local Dr. Jeff Albright was the stand out rider, besting Simeon Glasson and Canadian Jesse Cohen. The second heat featured stand Canadian Tom Soltysiak and local rider Dwight Bode advancing into round 3 while local riders James Lundin and Luke Mathison set their sites on the repechage round. In heat 3 Californian Owen Barnhart and 2016 runner up Ryan Allderman moved forward sending Tony Litke and Jonathan Erbele to battle it out in round 2. 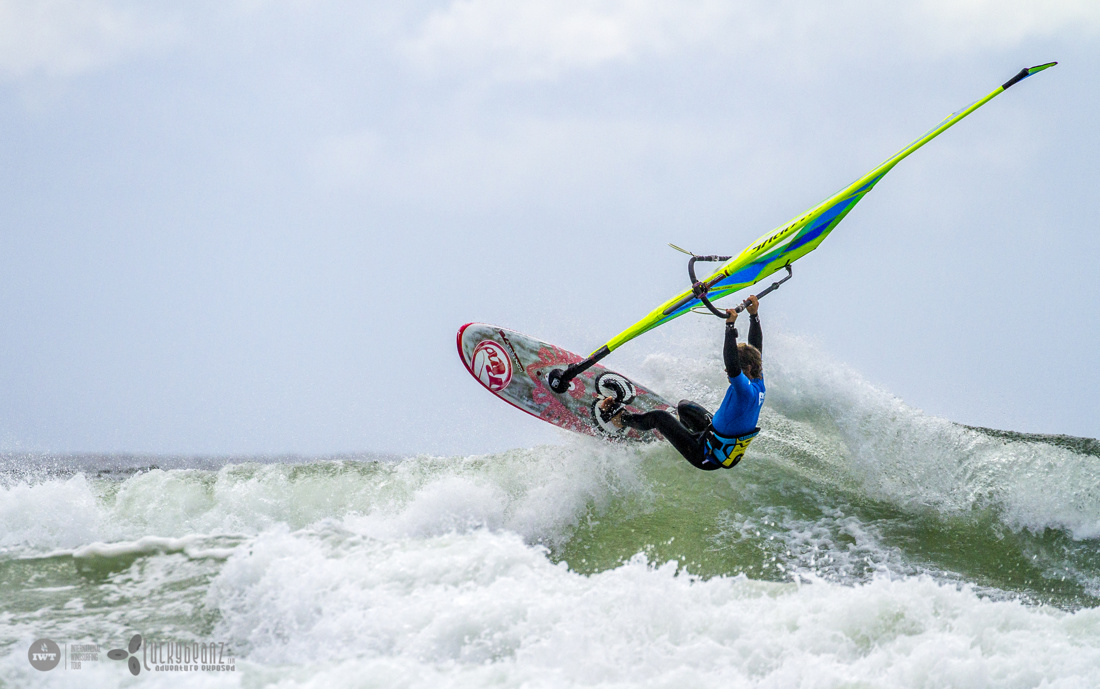 The pressure was on in round 2 with 5 riders battling it out for the 2 remaining spots in the semi final. Jesse Cohen and Luke Mathison proved to be worthy and booked their spots in the semis. 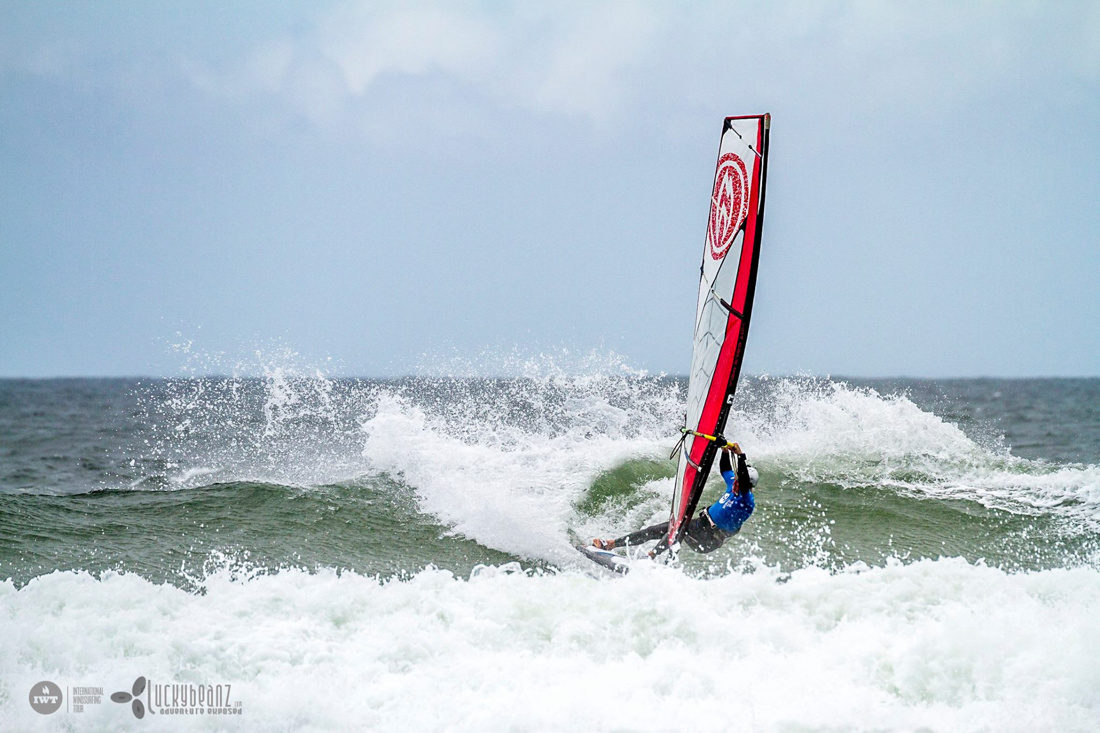 The stage was set for the Amateur final as conditions continued to build. Drawing first blood was Tom Soltysiak flowing through his first wave with deep stylish bottom turn to top turn combo, and an aggressive hack off the top to finish. Jeff, Simeon, and Jesse were battling it out as well, each trading strong wave rides, but could not quite match Tom’s speed power and flow. 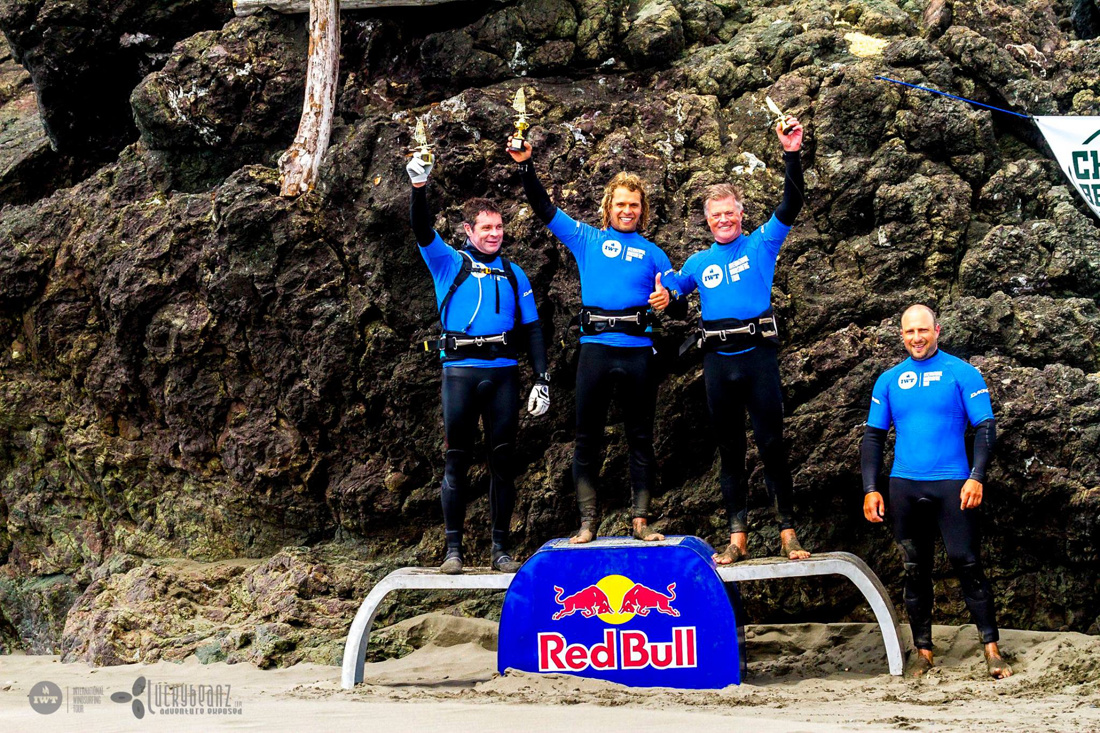 Intermixed with the Amateur heats, the ladies got a chance to show off their skills. Canadian Jenn Carlisle’s training paid off. She was able to choose the larger set waves of the heat and used the waves to their full potential with critical turns under the lip winning the women’s division. Sam Bittner was not far behind also picking up her game with crisp bottom turns and well timed top turns. Mandi Sinclair debuted her competitive windsurfing career sailing into 3rd place. 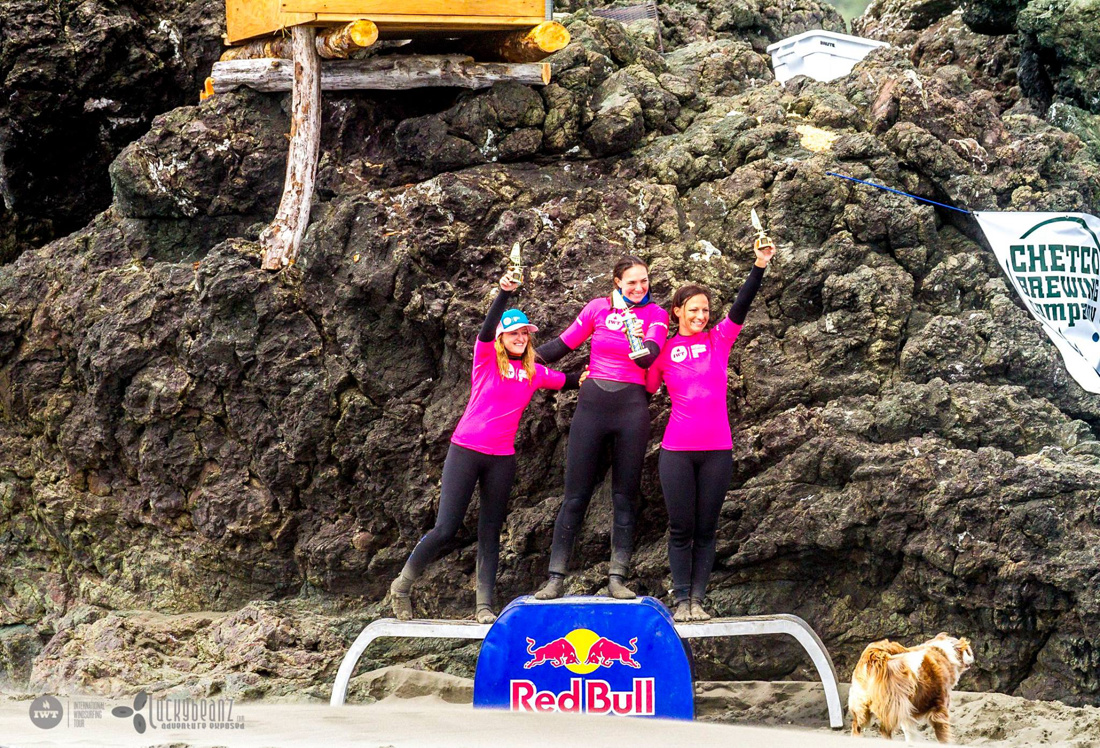 Clear talent shown through the Masters divisions with 3 rounds of the four men over the age of 45. Results were quite mixed through the rounds. Ferdinando Lofreda proved his hunger taking the win in round 1. Sean Aiken battled back in rounds 2 and 3 beating out Dr. Jeff Albright, Ferdinando L, and Simeon Glasson. The final round of the day sealed the win for Sean Aiken with a clean back loop and strong wave riding, picking off the biggest set waves of the heat and riding them with drive and determination. 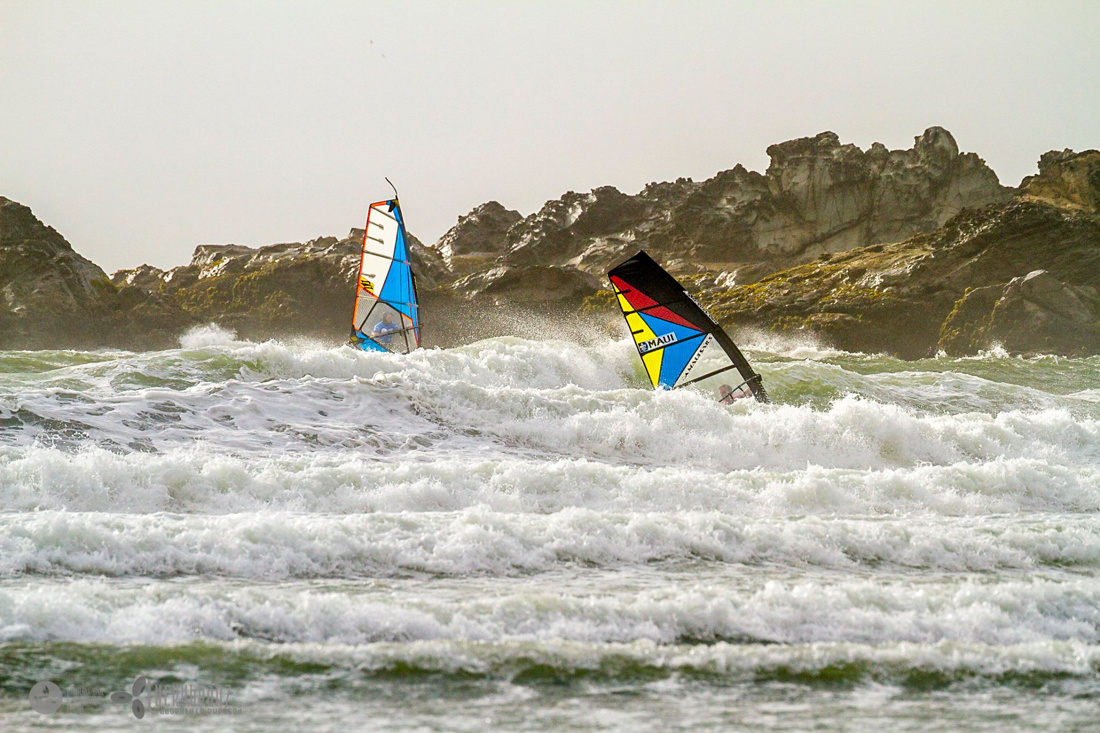 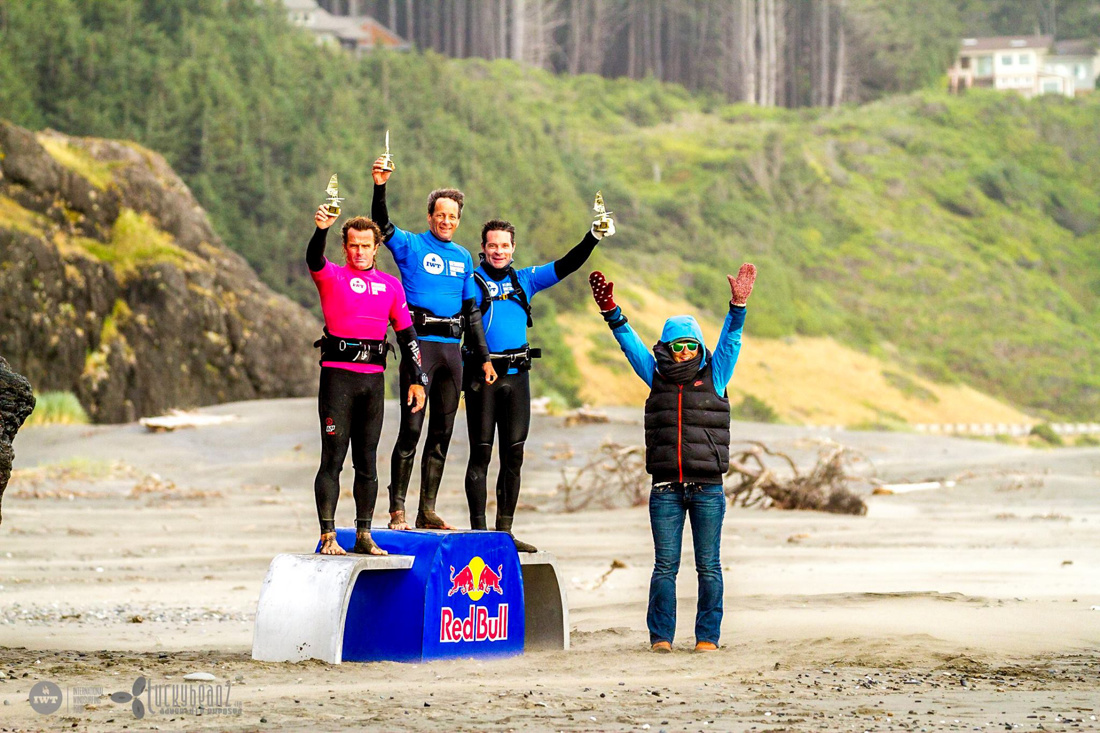 The Grand Masters division saw three local legends battling it out at The Rock. Dwight Bode took the win while Dana Miller impressed the crowds with his strong riding and massive forwards. James Lundin rounded out the top three talented sailors over the age of 55 in the grand masters division. 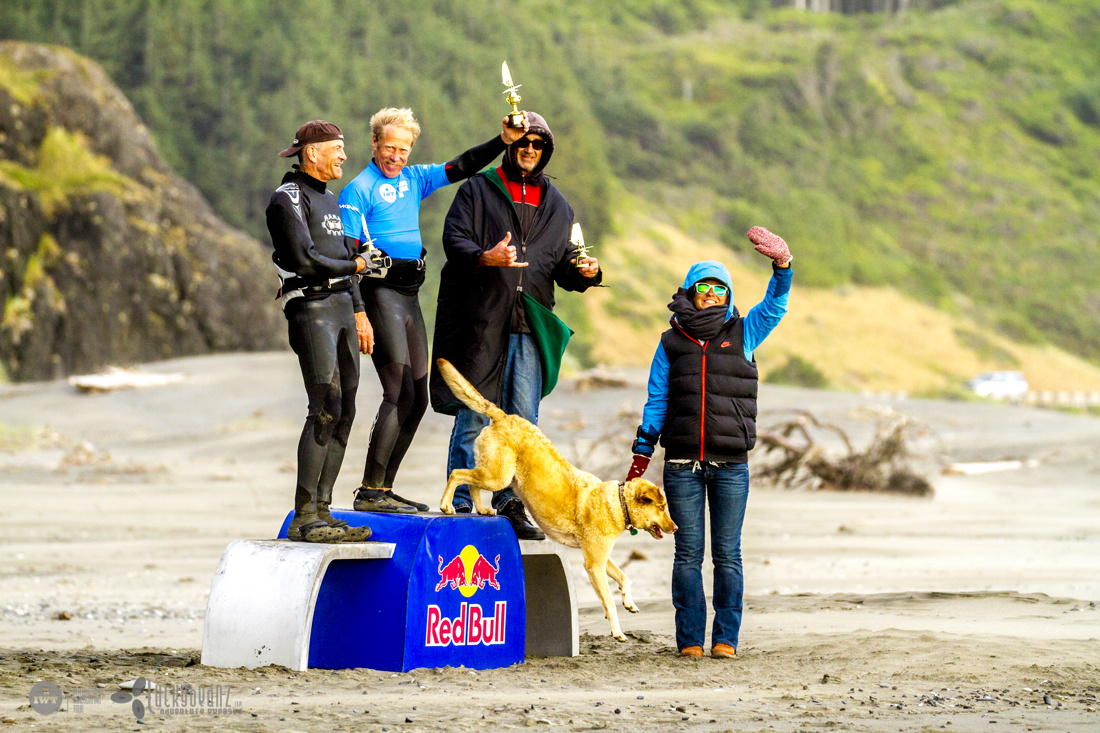 Before the pros had a chance to hit the water, a small squall blew through Pistol River State Park. A short 2 heat break allowed time for the wind to pick back up proving strong enough to add a jump and the pros re-rigged to 4.2 and 4.5 meter sails.

To start off, Ferdinando threw a massive late hit to take the lead in heat 1 ahead of Boujmaa Guilloul and Russ Faurot. In the dying seconds of the heat, Boujmaa managed to nail a wave 360 stealing the heat win and securing his spot in the final. 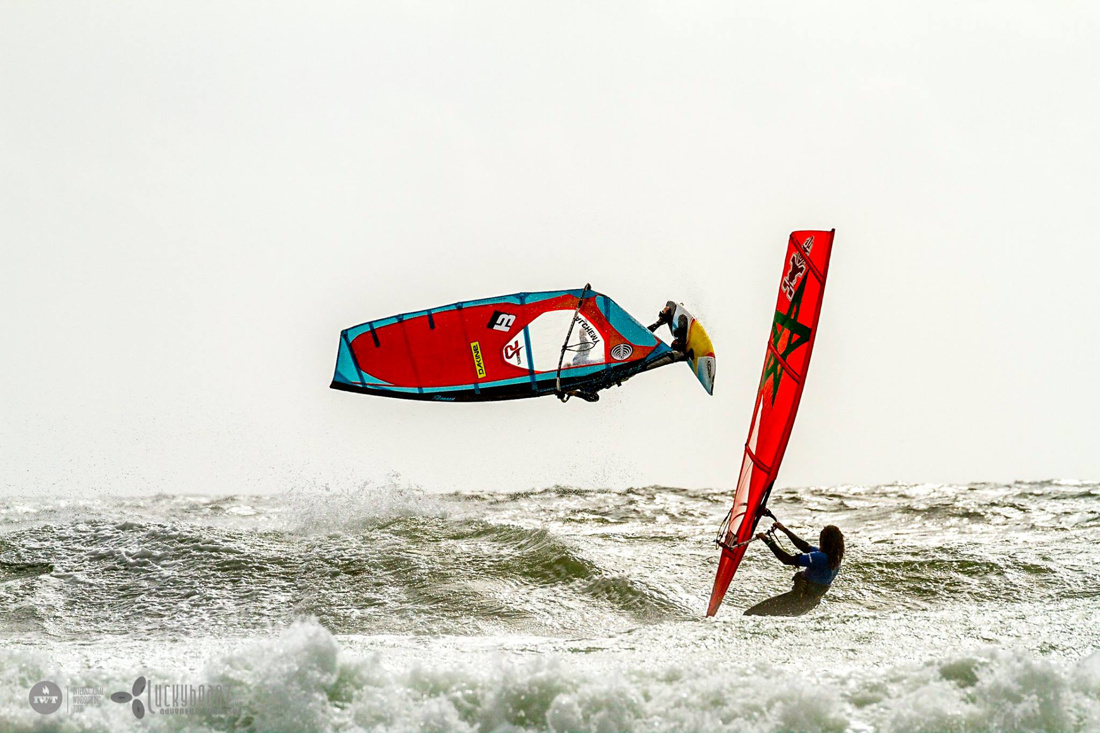 In the second pro heat of the day, coming straight off his win in Barbados, Morgan Noireaux narrowly beat out Phil Soltysiak and Sean Aiken. 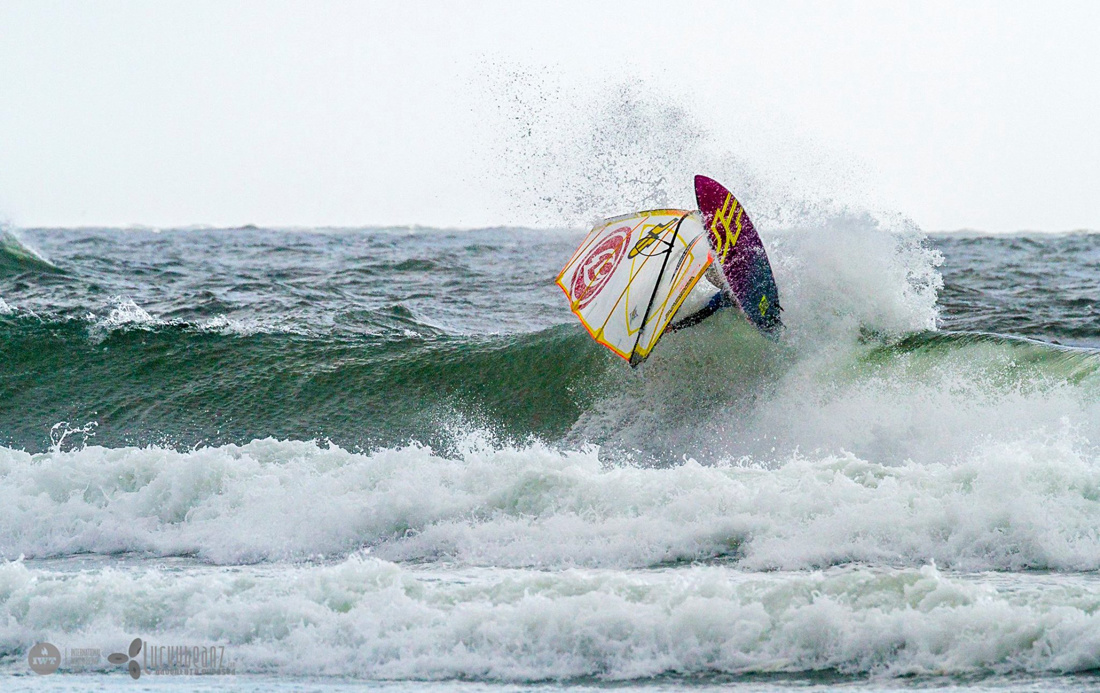 In the repechage round of the pro division, IWT Co-Tour Founder Russ Faurot, got in tune with conditions blasting a big areal off his first wave and immediately backing it up with some powerful turns on his second wave pulling away from his competitors. Phil Soltysiak gained confidence as the heat progressed booking his place in the final leaving behind Sean Aiken and Ferdinando Lofreda. 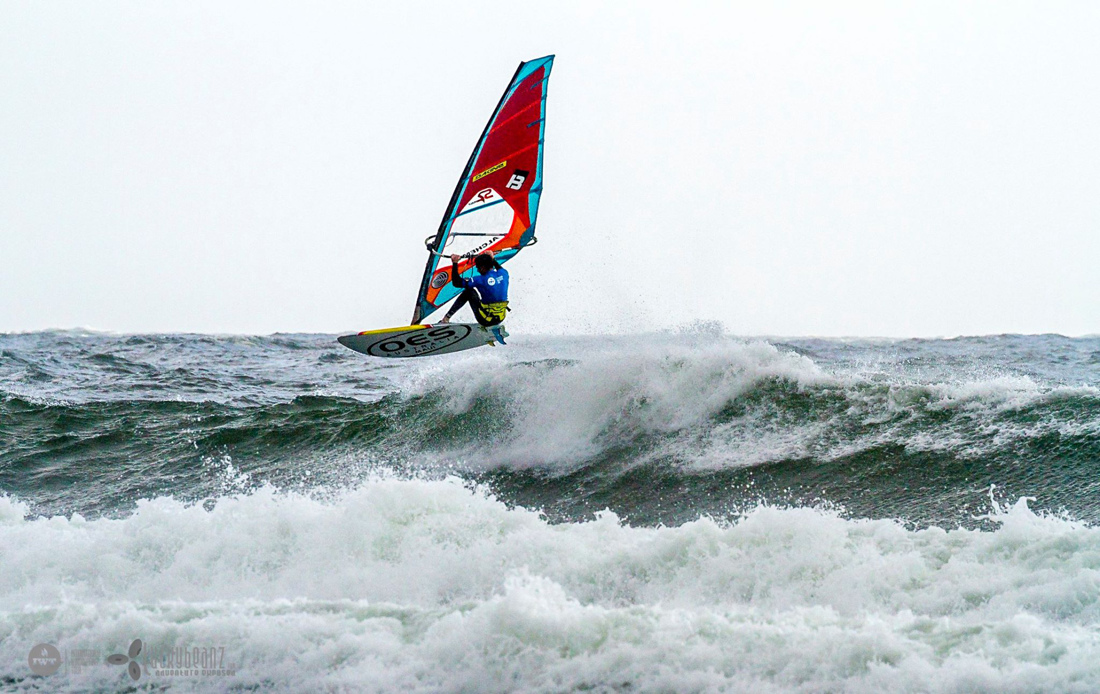 The Pro division final featured Soltysiak, Faurot, Noireaux, and Guilloul in a tight battle for the win. The beach filled with spectators as the pros exploded into a dizzying display of back loops, one-footed back loops and tweaked push loops. Morgan Noireaux kicked things off with a huge backloop just as the green flag went up. Boujmaa countered with a slightly lower one-foot backloop. Russ threw his hat into the ring with a clean backloop of his own. After a slow start, Phil landed a backloop, followed by a tweaked pushloop in the closing minutes. The results were incredibly close, with Boujmaa Guilloul sneaking out a win on a tiebreaker, with his well-timed wave 360 proving to be the difference. 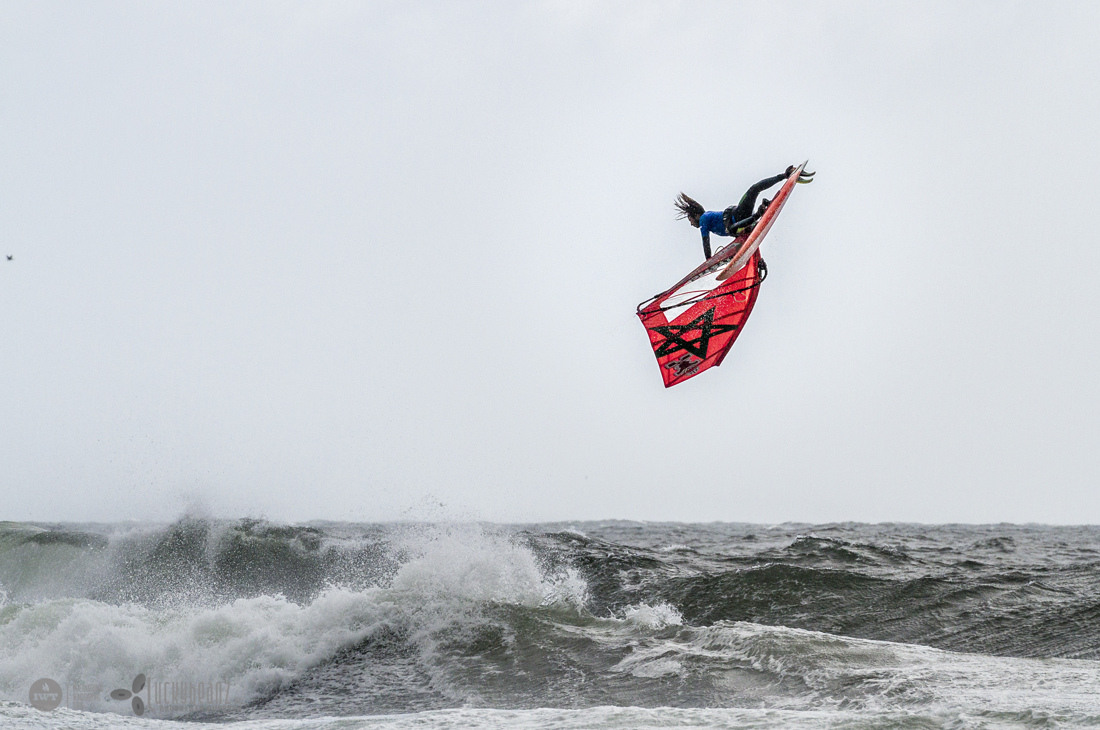 Congratulations to all the riders, and we look forward to seeing you down in Rio Vista next weekend for some freestyle and slalom action! 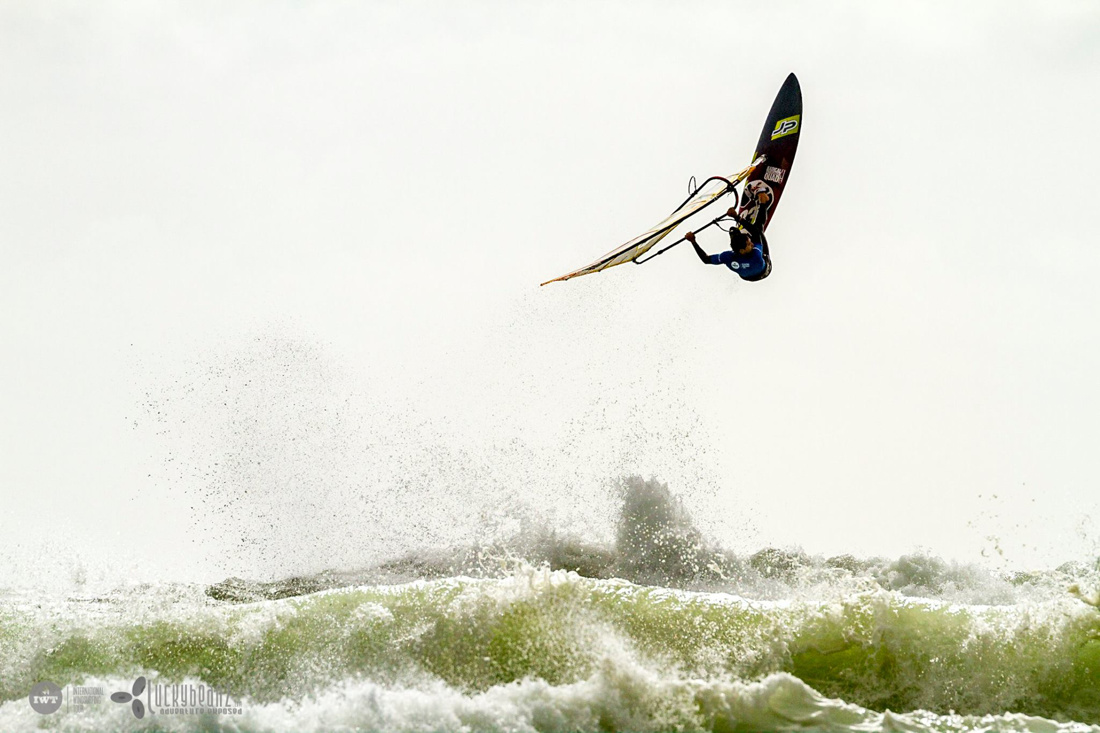 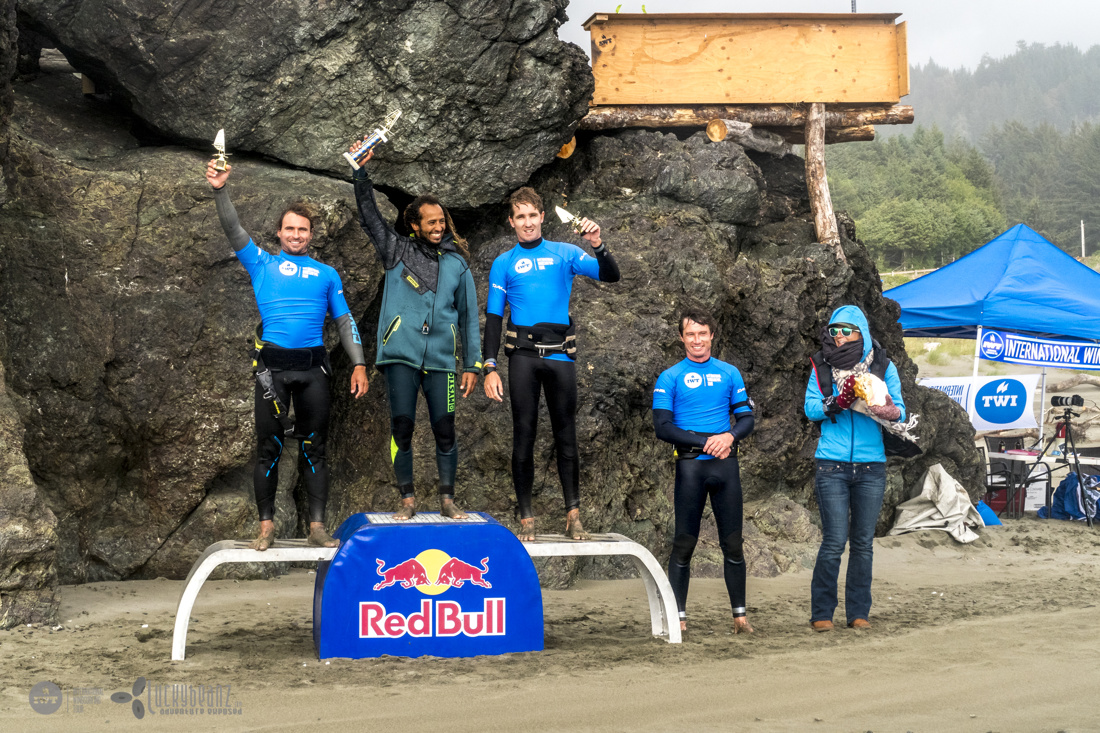 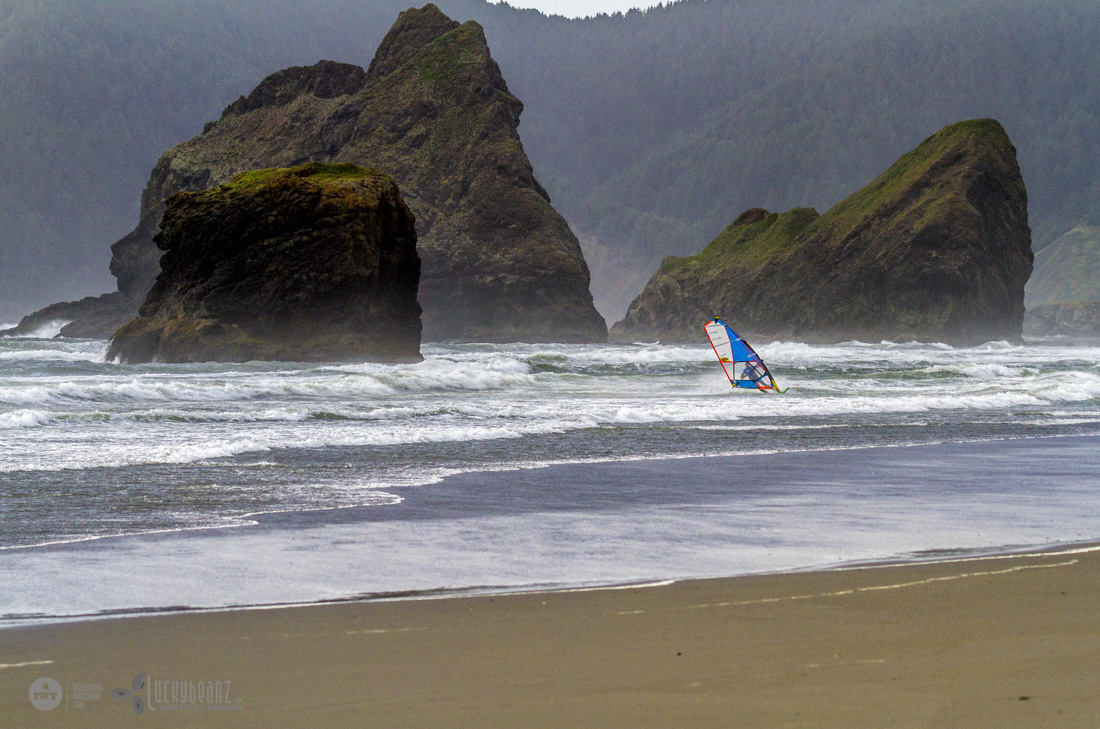 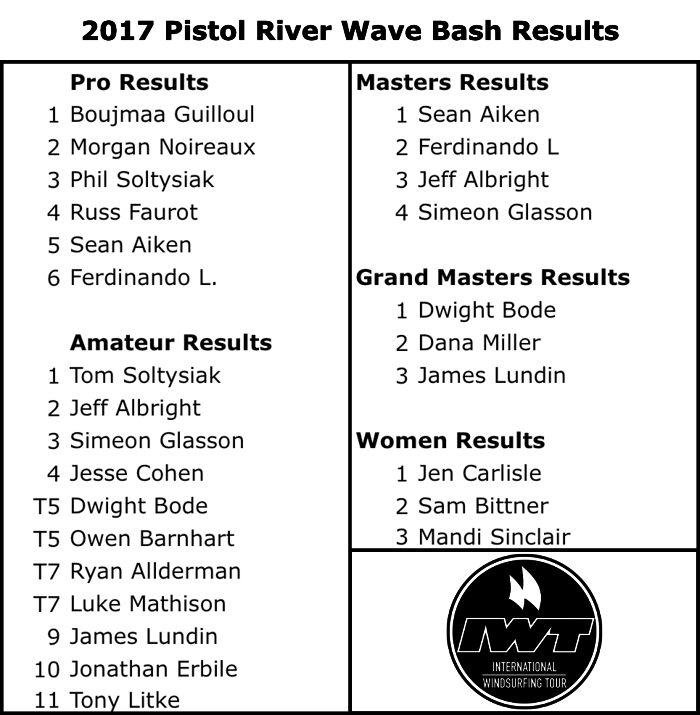