The best forecast day of the contest window opened with an agonizing realization: the waves in the bay were certainly up but the bulk of the 2.5-3.0m swell was coming from an angle a little too south, and we could see it rolling past Mantanzas out to sea. So close to a mast high plus day! Instead we would have to contend with the still very respectable overhead fast walls. It was time for the Pro Men and Women to shine.
The wind was building as forecast and the first heat was sent out at 12.40pm. Federico Morisio, Tom Soltysiak, Takara Ishii and Toto Herman were the first to test the conditions. Federico was on fire. His flowing, carving style with powerful lip hits and smooth aerials put him well above the pack to leap into the 3rd round and show himself to be a favorite. Takara was also sailing well with some strong power turns to take the second spot into the 3rd round. Tom and Toto were relegated to the repechage for now. 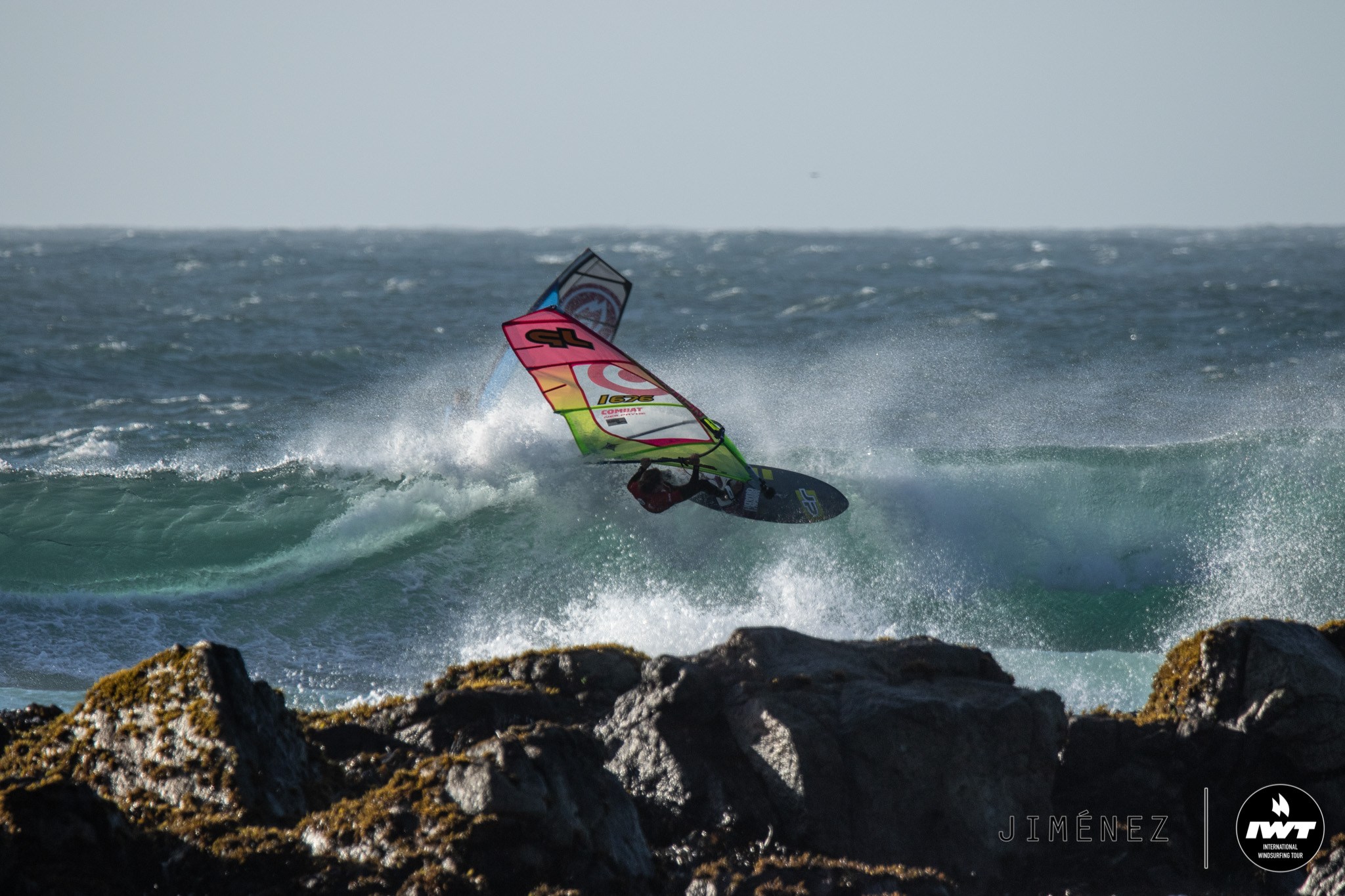 Heat 2 saw Russ Faurot open proceedings with a fantastic wave ride from deep behind the rocks. Big powerful top turns in the pocket throwing plumes of spray and very late hitting aerials to take the highest wave score of the heat and the first spot to jump through to the 3rd round. In second place was Felipe Wedeles with two solid mid-range wave scores edging out Matias Vargas who had a very good first wave but no real second wave to bolster his overall heat score. Arnaud Frennet was in 4th spot with no set waves in the heat so he and Matias were sent to the repechage for a second shot.

Heat 3 saw last years champion Benjamin Fabres on the water for the first time and the first chance the judges would have to see how he was going to perform this year. He did not disappoint. His first wave threw down the gauntlet with the highest score so far in the excellent range. His speed and exceptional local knowledge of this fast and complex wave means that he can find and hit peaks that are tough for anyone else to see coming with blistering speed, power and accuracy. This wave ride gave everyone clear warning that he was looking like the man to beat once again in 2018. Behind him was another very strong local rider Diego Fabres who locked in two solid rides to claim the second spot to jump into the 3rd round. These two local hot shots beat two other strong locals Alex Vargas (local organizer extraordinaire) and Nicolas Recordon who is a Grand Master (!) but still ripping hard at the Pro level. These two find themselves in the repechage to try to fight back to the top ranks. 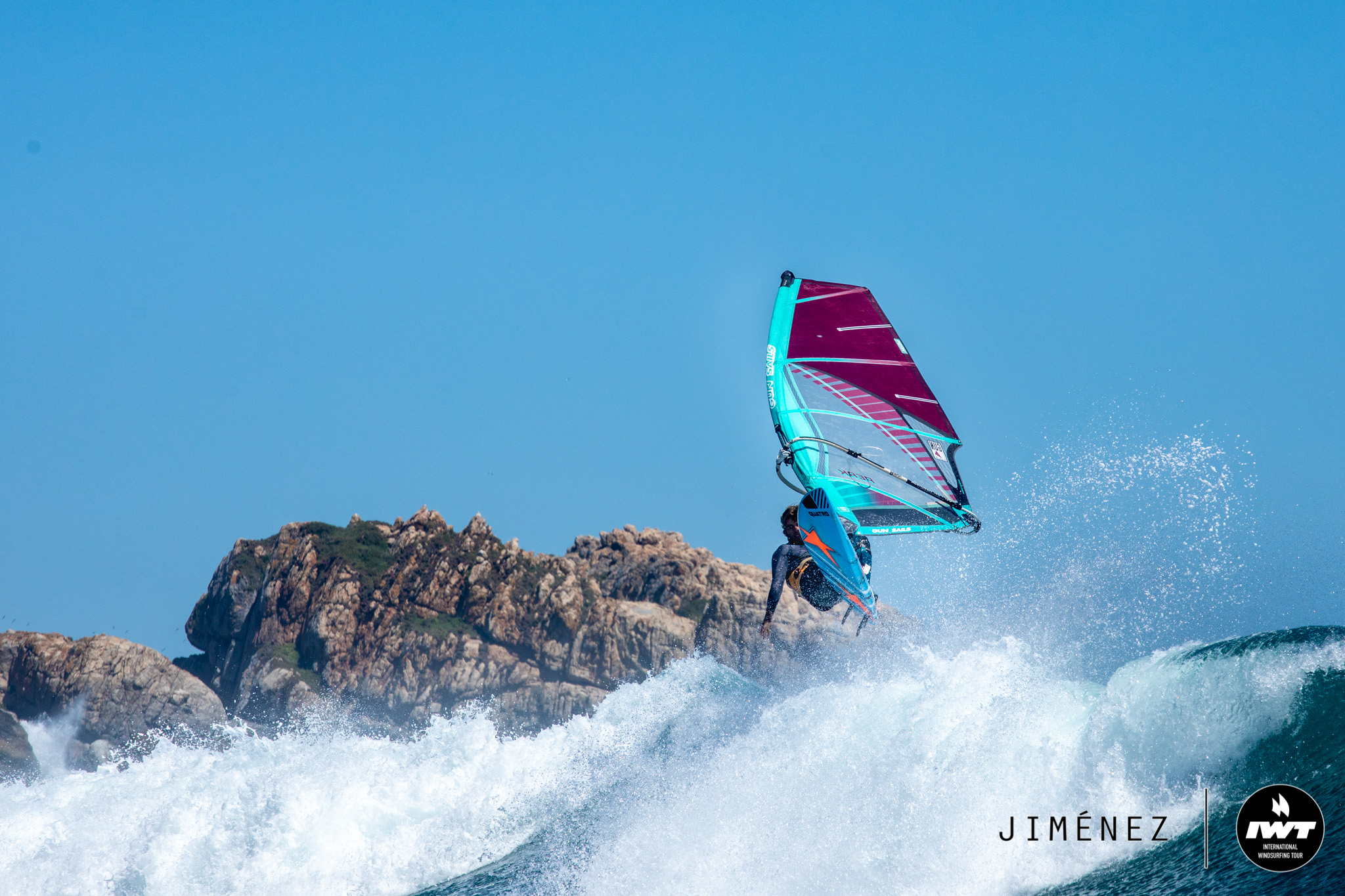 Heat 4 was the final first round heat of the Pro Men and it hit off with a bang as tour Champion Antoine Martin started a wave from deep behind the rocks to find the pocket with a powerful top turn hack throwing buckets. His follow up maneuvers were limited by the wave dropping out but the first hit was strong. Unsatisfied with that effort, toward the end of the heat, he found an even deeper wave with a wall that held up for him beautifully and he tore it apart. Huge late hits, a big aerial and a long ride that left nothing out there. He was rewarded with an excellent range score of 8 plus. Right behind him was young gun Joaquin Desriviers. This local youth has talent and heart but he is not always able to deliver his best in heats for some reason. When he’s on fire he is one of the best around, and this time he was looking strong with scores in the very good range to take the second spot. These two flew over to round 3 while Marcel Janssen and Cote Priewer had to settle for their second chance in the repechage.

The rounds went on through the repechage and 3rd round to whittle the Pro Men down to the final 6. Now it was time to shift to the Women’s heats. Heat 1 saw Björte Pürschel, Sabine Zola and Antonella Davanzo hit the water. Björte is the local hot shot and an impressive big wave charger. In the smaller waves (head high – she starts to get excited at mast high and the grin widens as the waves rise for her) she is less agile and has fewer opportunities to use her full power and experience, but that didn’t stop her from winning this heat. Sabine and Antonella also sailed well but they would have to battle in the repechage to claim their finals berth. 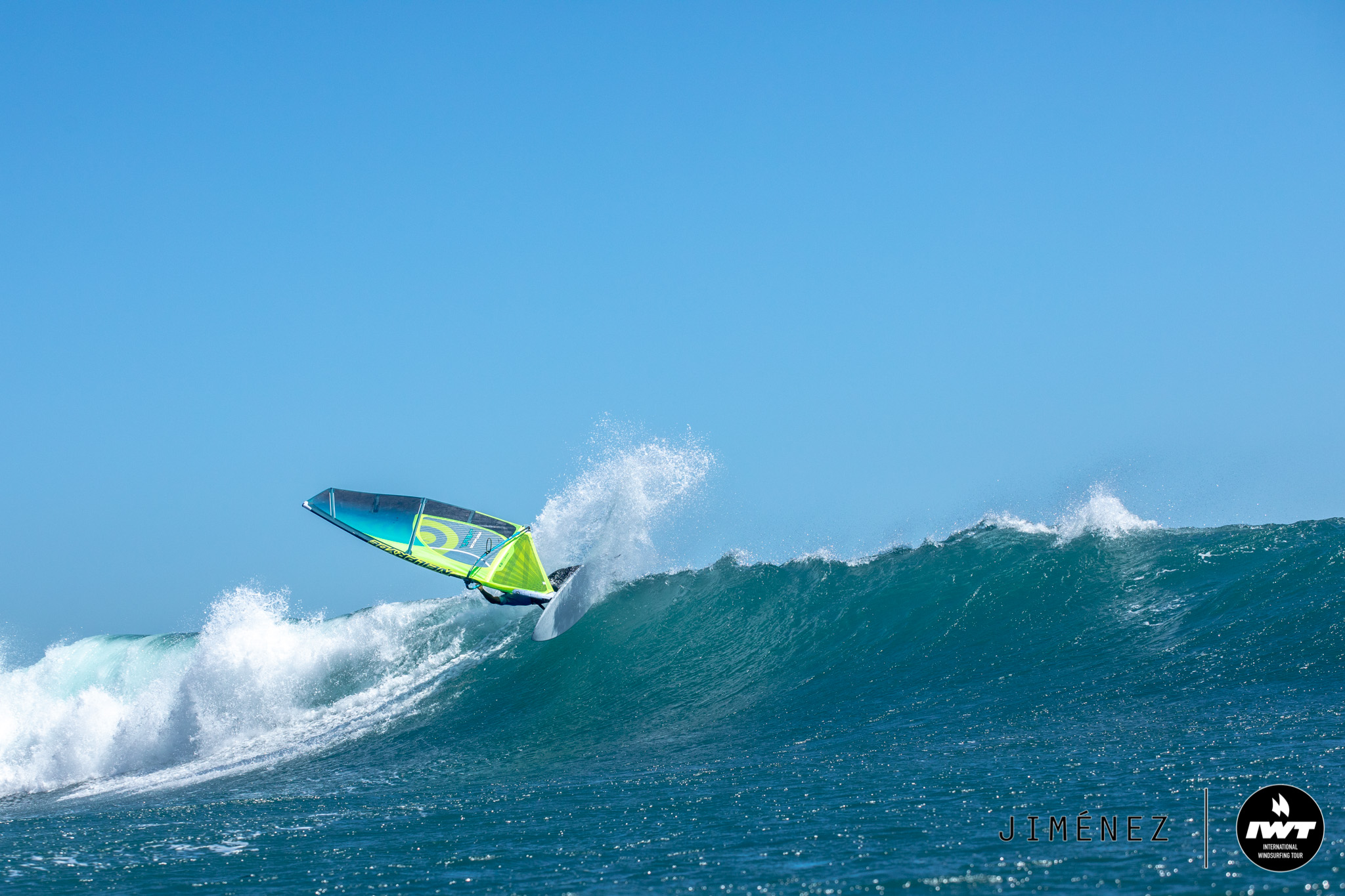 Heat 2 of the women saw Maria Andres, Irupe Lamanuzzi and Amaia Maturana strut their stuff. Maria was sailing strongly and won the heat with fast down the line style giving her the edge over young Irupe who is going to be a force in coming years. Also young and looking promising for the future is Amaia, but this time around she and Irupe would have to battle in the repechage. 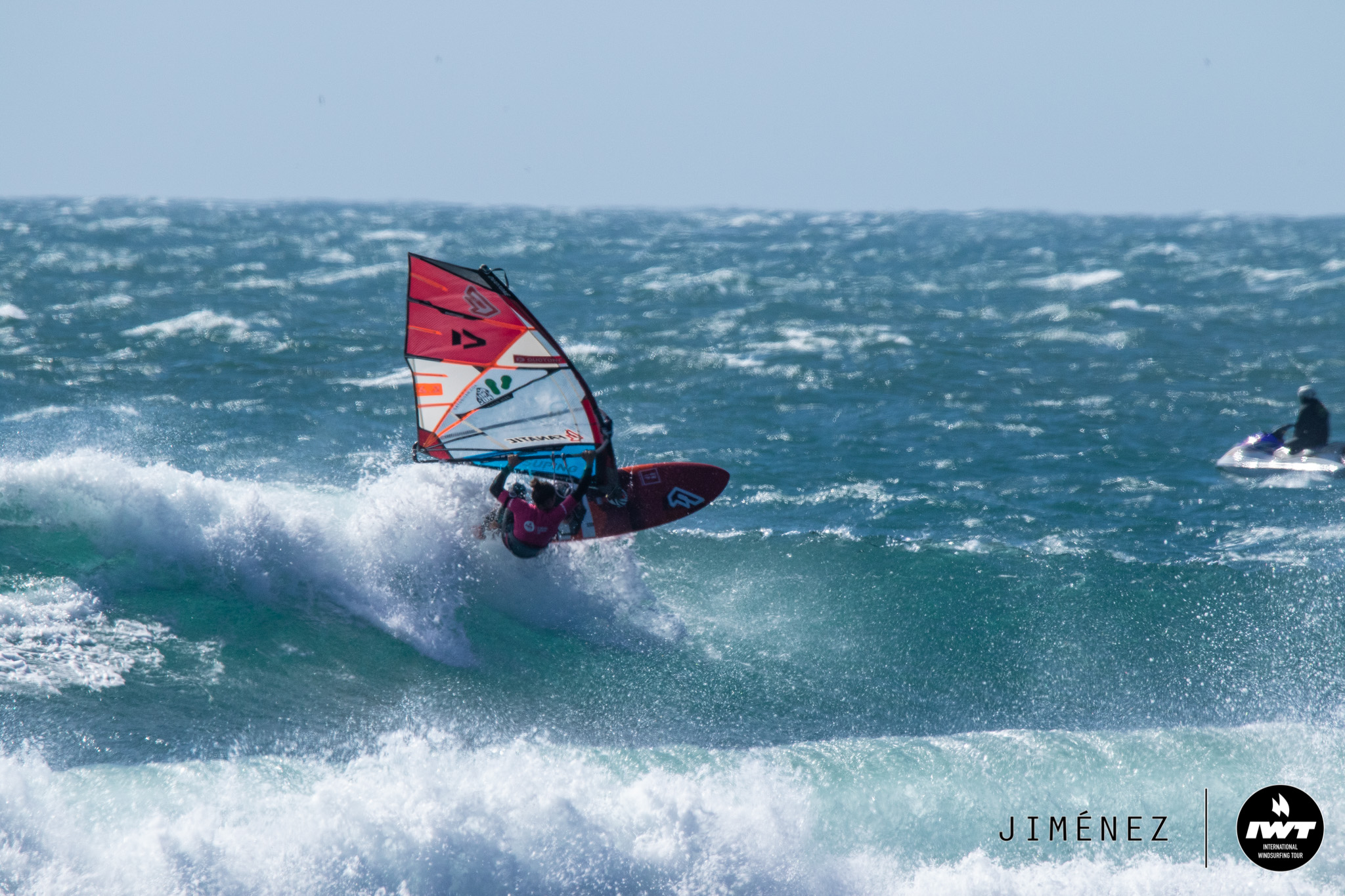 The men’s semi-finals. This is where even the very best riders know they must pull out all stops to make the final. The deep pool of local hot shots combined with the best of the international riders, created an exceptionally high standard of riding here. In the first semi Joaquin, Russ and Benjamin hit the water to find the top two. Joaquin and Benjamin lit up and Russ couldn’t fire like he did in earlier rounds. The second semi saw Federico, Matias and Antoine head out to battle. These three were very hard to separate. All three had strong best waves and impressive big hits. All three were hungry for the final. All three could have been strong finalists. In the end Federico just edged out the win with Antoine in second and Matias the one to just miss the final.
The stage was now set for the finals. Each final would be an extended time from the preliminary heats (of 18 minutes) now up to 28 minutes. This gave the competitors every opportunity to catch multiple set waves.

First up the Pro Men’s Final: Federico, Benjamin, Antoine and Joaquin. Benjamin opened with a bang. His first wave was an 8.5 on a big set wave from deep behind the rocks. He carried incredible speed through his deep gouging bottom and top turns right at the peak, and then a crazy critical goiter right in the pocket that had the crowd roaring with approval along the beach. Antoine followed with another set wave but didn’t have the same opportunity as the previous well chosen wave from Benjamin, and was only able to reach a 6.0 score. Antoine found more waves, but none that allowed him to reach his best form. Federico found a beautiful peak behind the rock with a great bottom turn top turn combo but not much else. He found another wave with a one hit aerial with not much else and then some other reasonable waves but none that could break into the excellent range. Benjamin showing his great local knowledge picked another perfect wave taking off from deep behind the rocks flowing through bottom and top turn combos, straight into a mid-section aerial, and then on to more beautiful bottom turns, with stylish cut backs and a perfectly executed taka on the closing section. The win was sealed the with this 7.5 second wave score. Joaquin just couldn’t find form and struggled with changing wind conditions, having to come in to change sails mid heat. He still managed mid-range scores, but not enough to challenge the others. 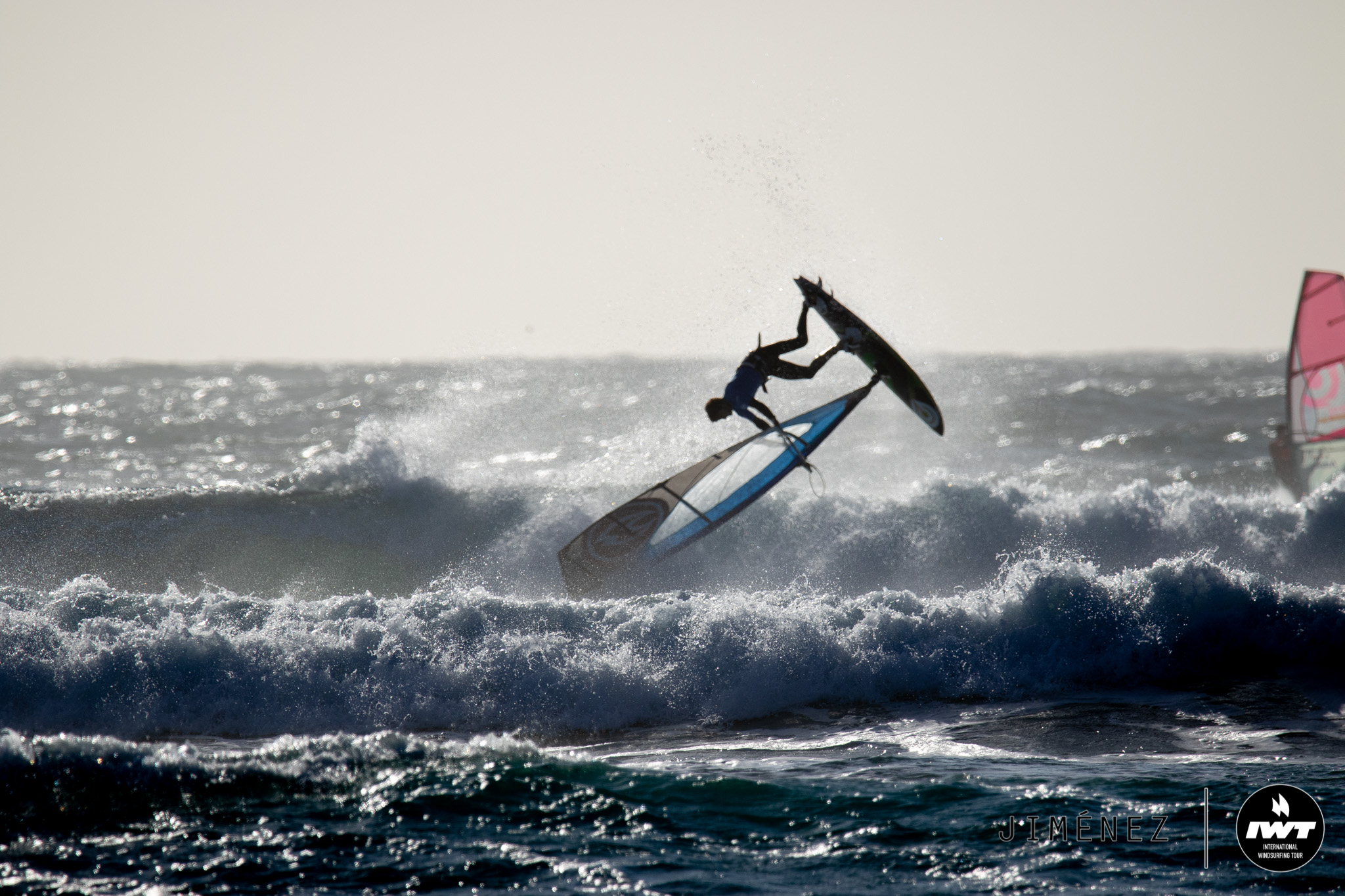 Next up the Women’s Final: Maria, Björte, Antonella and Sabine. The heat opened with a great series of set waves with Sabine picking off the biggest and best to set the standard for the heat. Her long flowing turns scored well. Maria was not far behind picking the second of the set, and riding stylishly scoring just behind Sabine. This left Björte and Antonella out the back waiting for more. Maria then picked up a solid second wave while Sabine struggled to repeat her first wave score. In the end it was Maria’s back up score that made the difference and allowed her to claim top spot in Mantanzas ahead of rival Sabine. Björte had two good wave scores, but neither enough to challenge for the top two spots. Antonella did not have her best heat overall but showed flashes of brilliance with a good bottom turn combo, however she struggled to find set waves to strut her stuff to the max.

The presentation ceremony was held on the beach in the fading light and glow of a very exciting day of competition here in Mantanzaas. Much of the crew then cleaned up and went to celebrate with dinner at the stunning Surazo Hotel, located right on the beach in front of the contest zone. 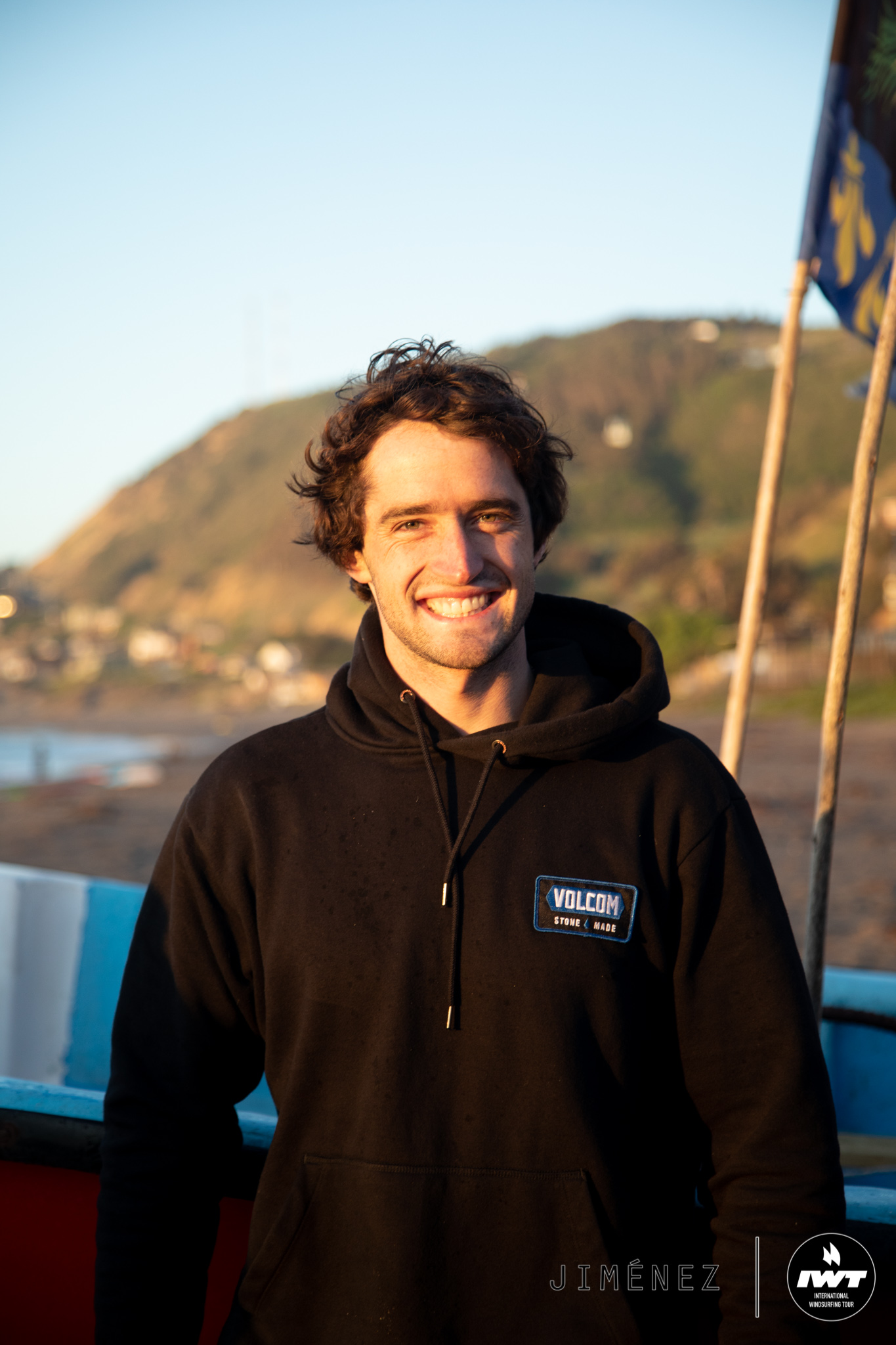 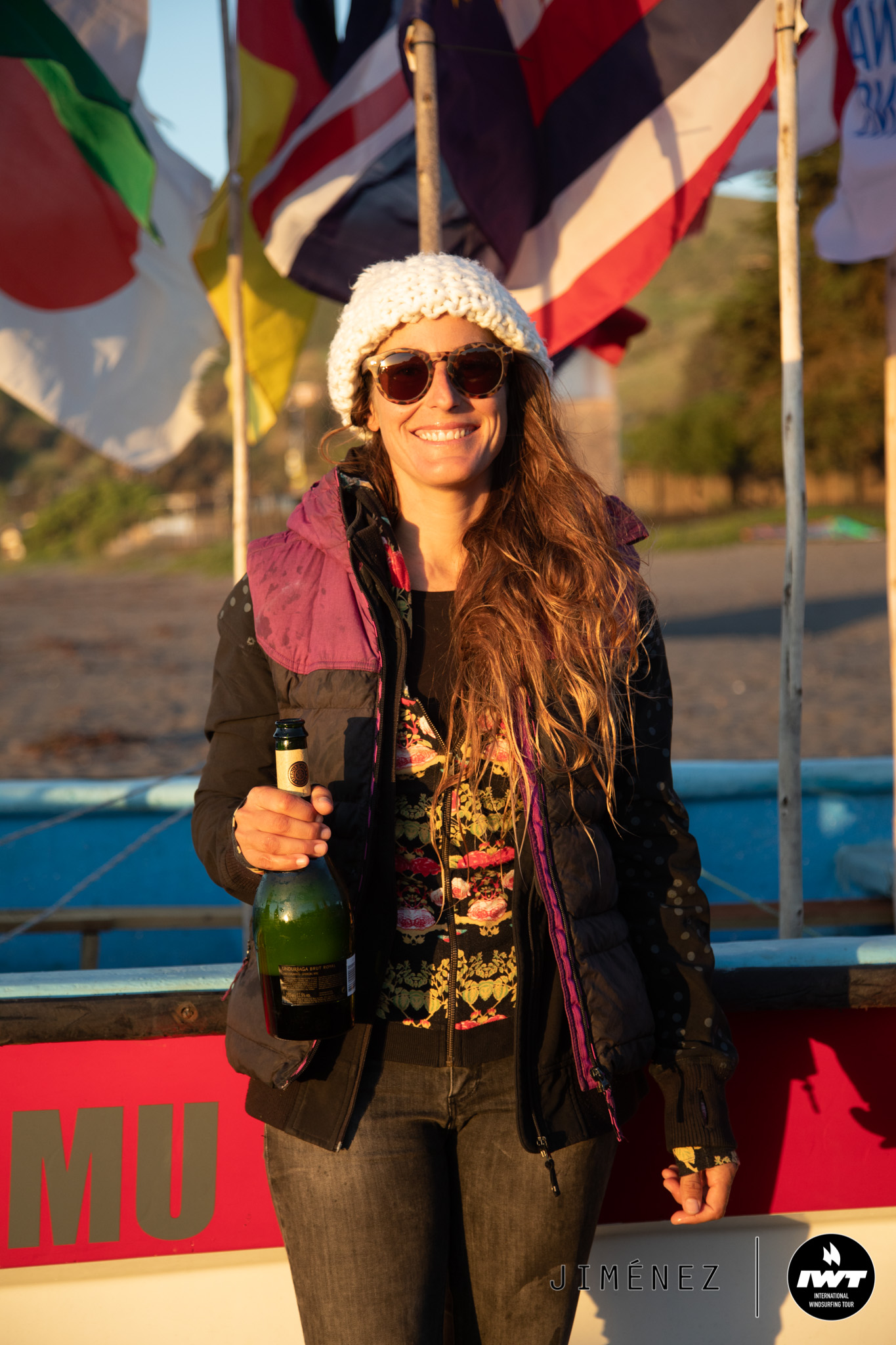 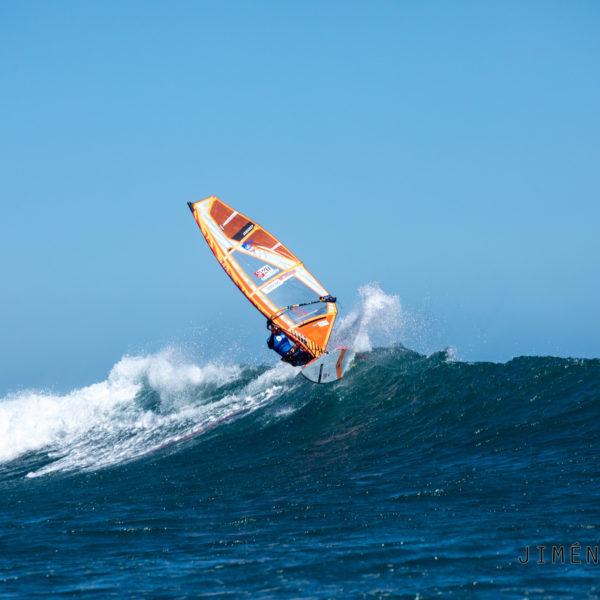 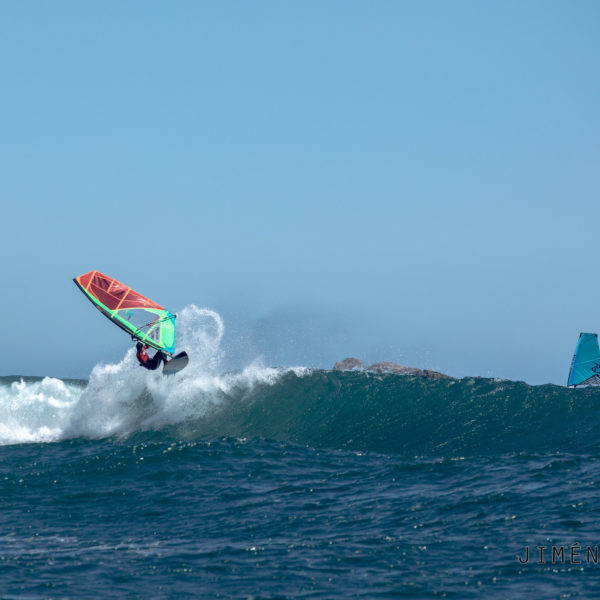 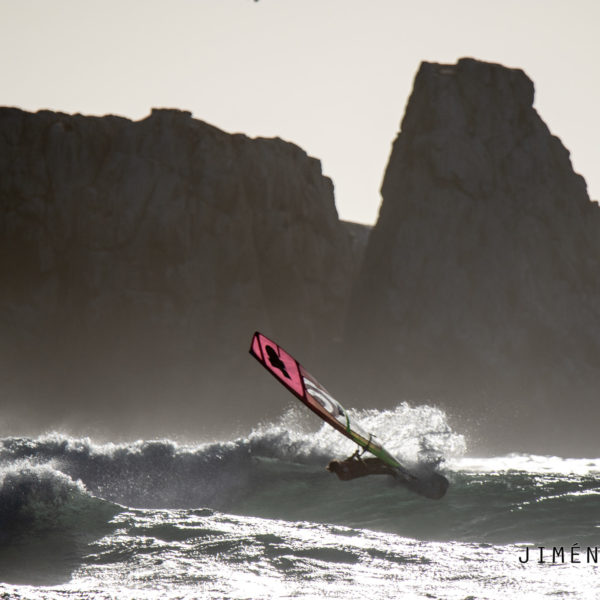 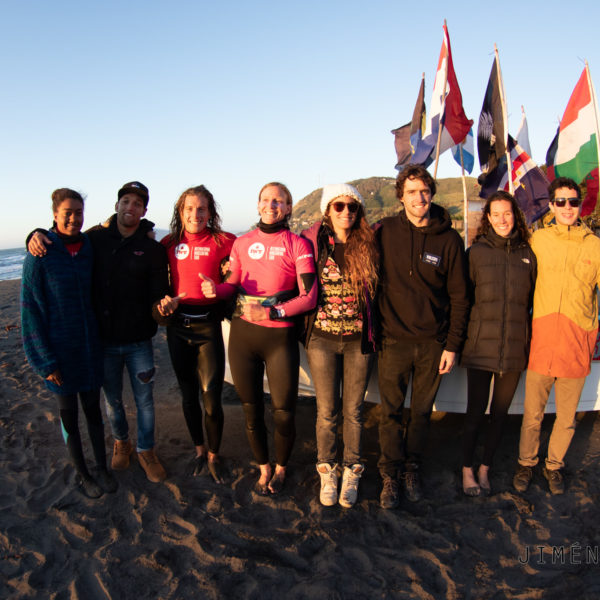 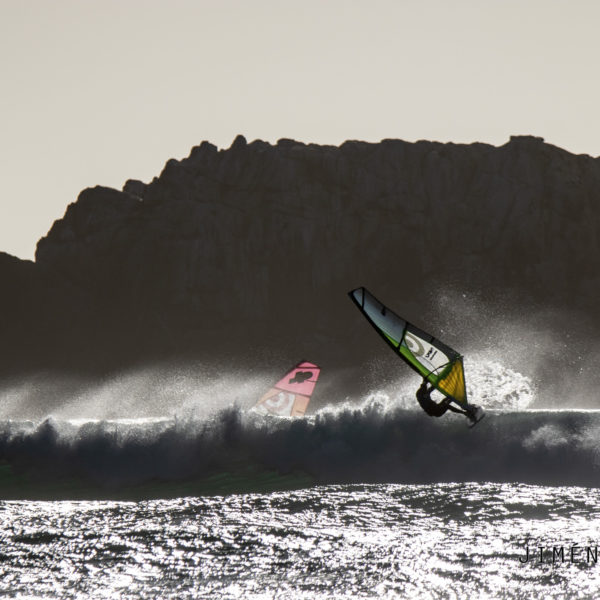 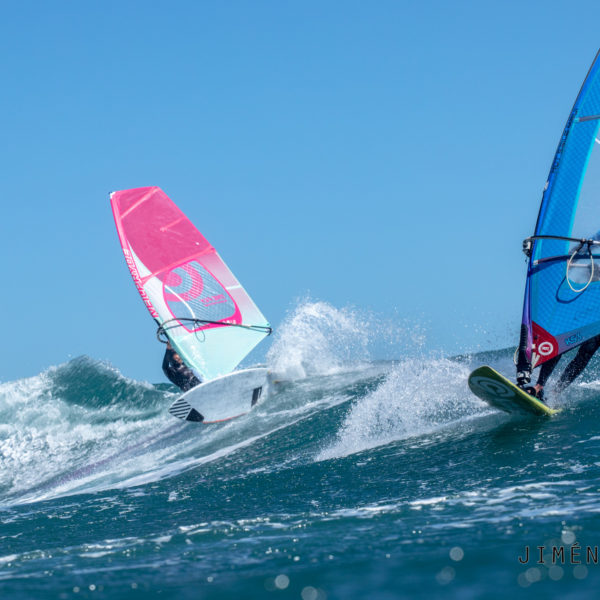 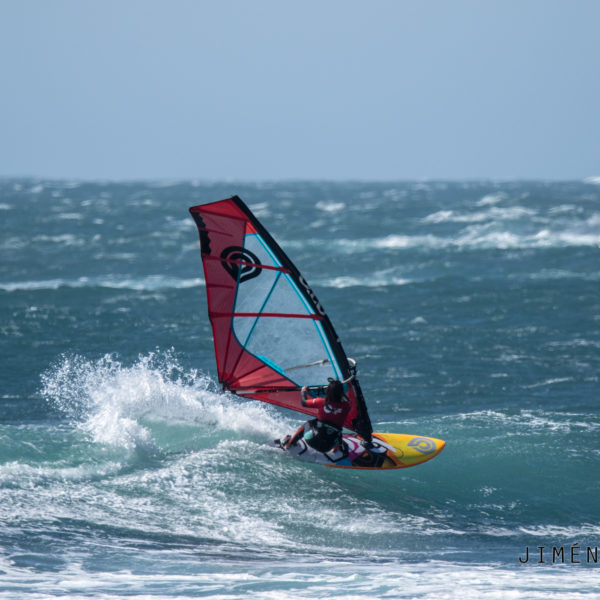 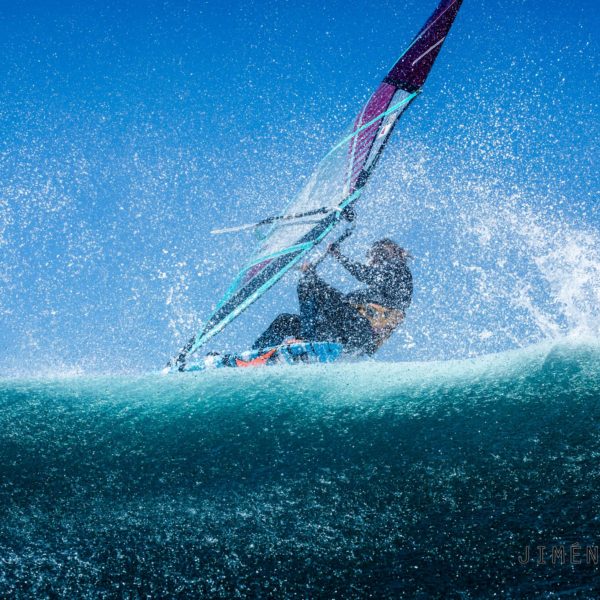