Day 3 dawned with early sunshine, head high waves peeling from the point, glassy conditions and a forecast of light 12 knot winds later in the morning. It was going to be touch and go based on that wind forecast but the waves looked beautiful so we launched into action at the 10am briefing and announced that the Junior Boys and Junior Girls would kick of the formal event proceedings out at the point. Amateurs were to follow if conditions allowed.

Running the contest at the point instead of directly in front of the resort is an exercise in logistics and efficiency, but with a motivated team anything is possible. The wave is so long that each day we can pick the best part of it for the judging area. Today it was the top 300m ride from the point that was firing. The judging area on the inside of that ride is half a mile from the El Faro Resort. It’s all one wave. Despite the logistics, less than 2 hours later the WSL judges and IWT ground crew were set up in 4WD trucks with tables and chairs in the perfect elevated dune position with an excellent view over the 300m point break. 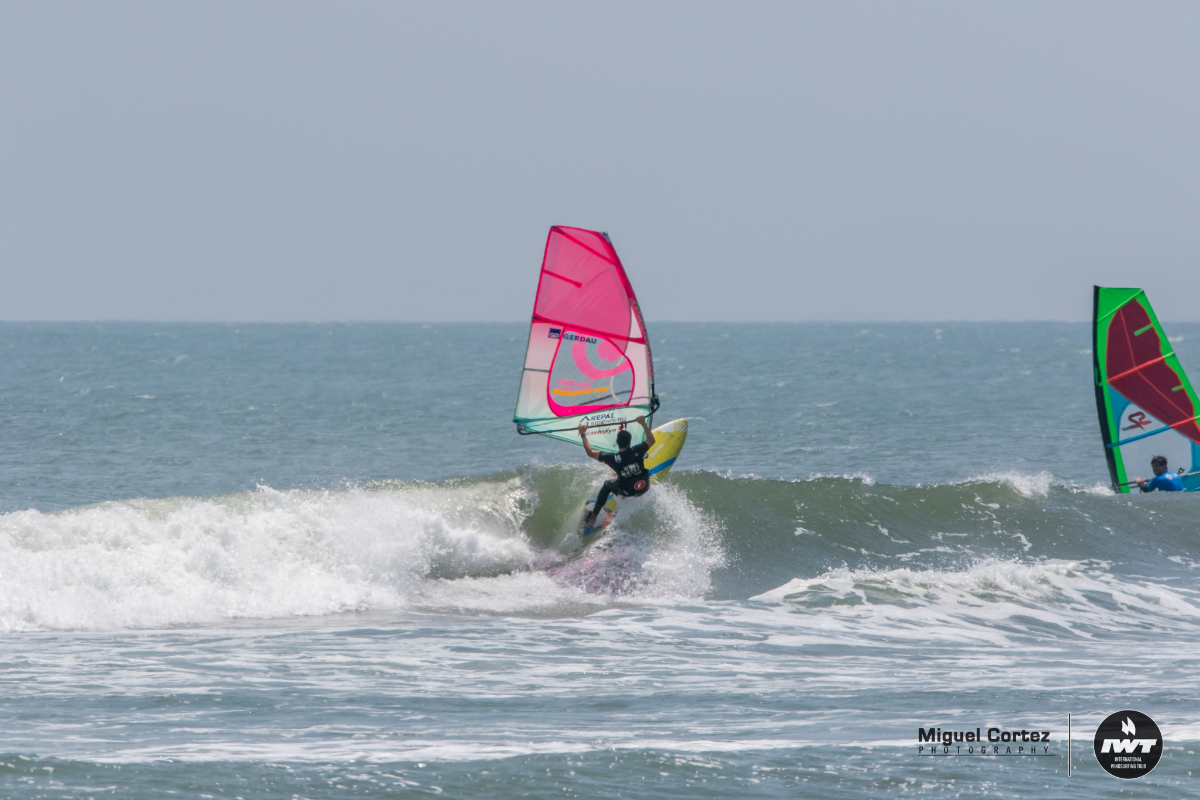 First up was Junior Boys heat 1. Joaquin Desriviers from Chile was the outstanding rider in this heat. Despite the light winds he was finding speed and power in the head high waves and on his best wave slashed 3 very impressive top turns right in the pocket scoring high 7’s and even an 8 from the WSL judges who love the power surfing style. A hard act to follow but local Peruvian Alessio Botteri (20) picked off a set wave and went big. Firing directly at the almost logo high pitching lip the judges and crowd were all getting to their feet to cheer, but it wasn’t to be. Alessio was a little late and was clobbered by that lip. No score. His next waves were ridden well but he had to settle for 2nd place behind the in-form Joaquin. Third place went to Felipe Marthe from Columbia who was sailing smoothly down the long swell lines. Felipe is used to strong winds where he comes from in Columbia so this light wind Pacasmoyo style of wave riding is a whole new kind of game for him but he sailed well and shows he will learn fast. Joaquin goes through to the Final while the others will fight for their progression in the repechage round.

Heat 2 saw the Japanese sensation Takara Ishii (17) hit the water with Brazilian Kauli DelaCasa and Simbad Lamanuzzi from Argentina determined to make their mark in their first IWT event. Takara has been a rising star at the Aloha Classic for a couple of years moving through the Amateur and Youth ranks there to create a classic story of rapid progression that led him, at only 17, to the Pro Mens’ Final in Morocco earlier this year. He did not disappoint here with strong riding to take the heat with his best wave scores in the 7.0’s, but he’s going to have serious competition from Joaquin who had slightly better wave scores in the previous heat. The youth fleet is strong. Takara you are on notice! Kauli sailed well but couldn’t find set waves and ended up with more wave scores than he needed but all of them in the lower ranges. Simbad had smooth and consistent rides but not hitting the lip with power and so he wasn’t scoring well enough to touch the leader. Takara through to the final and Kauili and Simbad to the repechage. 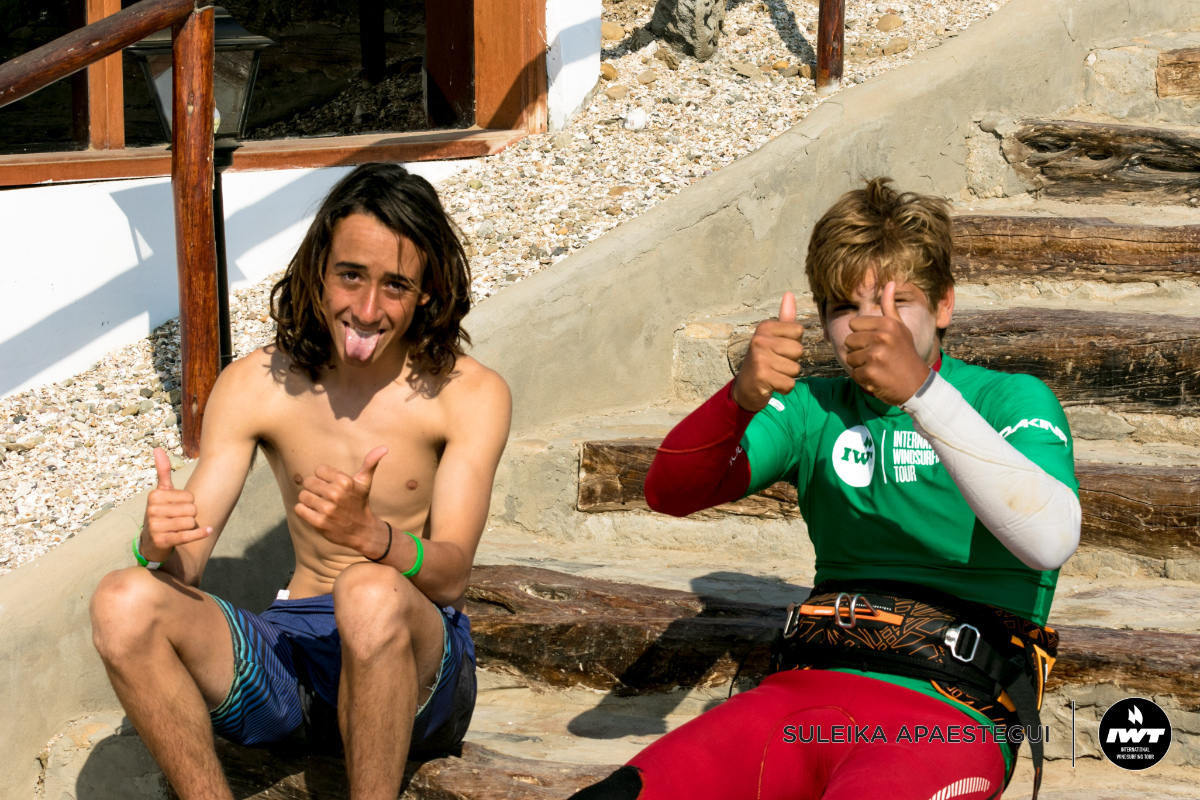 The next heat saw a first for the IWT: a Junior Girls fleet. We have 3 junior girls competing this year which is cause for great excitement! We are thrilled to see more and more young girls embracing wavesailing. This is an exciting trend across our sport. Earlier this year the PWA brought women’s only prize money to the Morocco event (the first time women have been the only division with prize money in the history of the sport), then in Pozo the Moreno twins brought equal prize money for men and women to the PWA event for the first time in history, and the IWT tour has had a significant increase in women competing last year and again this year. This trend has reached a point where the Women have just had more registrations than the Pro Men at this Pacasmayo event. Unheard of in the past and very positive sign for the future. So the first junior girls heat saw Olympic hopeful Maria Belen Bazo from Peru take and hold the lead with nice down the line rides and smooth turns that went to the critical sections a little more than her rivals. The time in the critical section impressed the judges. Irupe Lamanuzzi from Argentina and Ines Arija from Spain sailed very well too. Both catching plenty of waves despite the light conditions. The junior girls are running 3 all-in ‘finals’ to get an overall result. This was the first of those 3 heats.

Now it was time again for the junior boys and the repechage round. Alessio, Felipe, Kauili, Simbad. Alessio was in stronger and more focused form for this heat and pushed himself into the lead early with a powerful 7.5 ride. He stayed there with a backup score in the 5.0’s to emphatically secure his spot in the final. Only one spot remained in the final and this time is was Felipe and Simbad who were battling it out. Both riders had best wave scores almost identical in the high 5.0’s. In the end it was Simbad who just nudged ahead with slightly more aggressive turns in slightly more critical sections on his second wave score to take him into the final. Kauli didn’t have a great heat, missing the set wave rides and struggling to rack up the points. All are very talented young sailors. 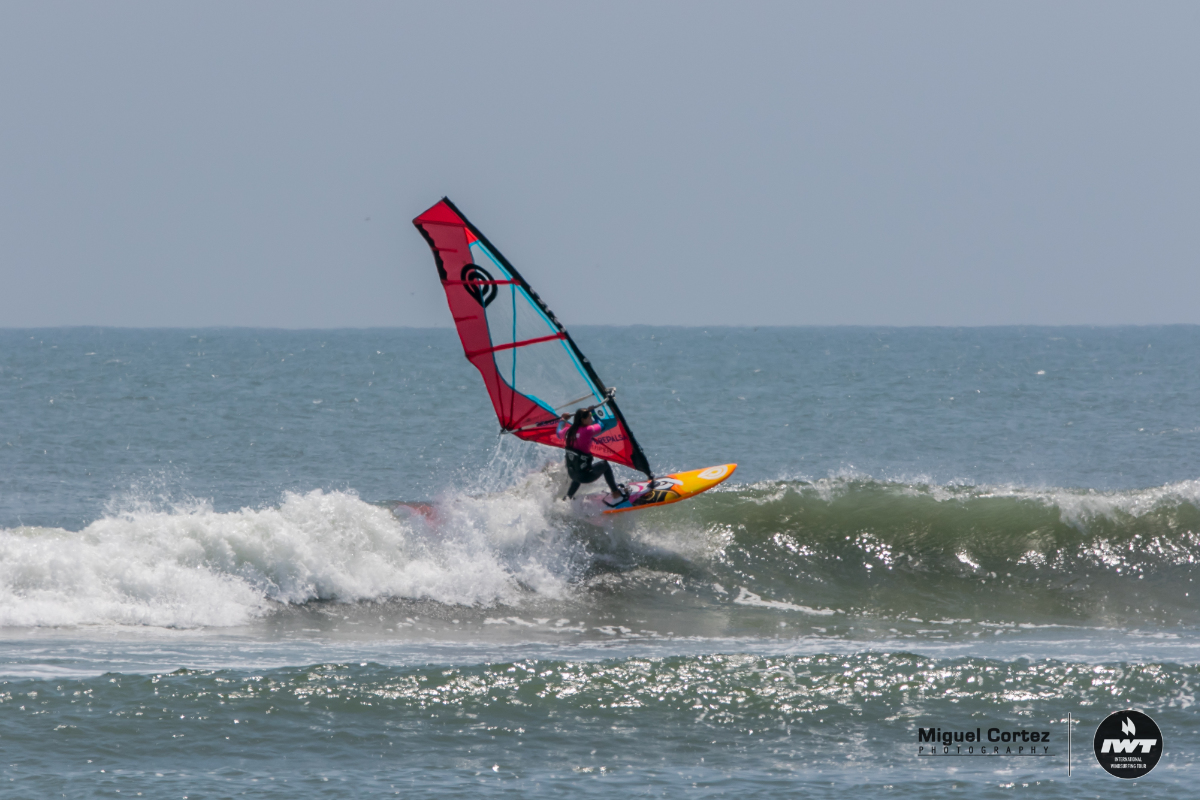 With the wind retreating a little we cautiously pushed on with the second of the Junior Girls heats. After the heat started the wind dropped a little more and the young girls were dealing with a rising current and difficult conditions but all of them found waves and good scoring opportunities so the heat continued under the watchful eyes of the head judges from the WSL and the IWT. In the end the result was a repeat of the first youth girls heat with Maria edging ahead of Irupe and Ines. Impressive light wind, down the line riding from them all.

At the end of that heat the head judges put up the postponement flag. The wind had now died out and was not good enough for competition. The contest was put on hold for 40 minutes to see if the wind would return. We then had a further 1 hour hold but the final call to cancel the day was made at 4.40pm. Time for the longboards and SUPs to head out.

A successful first day with great riding from our youth leading the charge. The forecast is for steadily improving waves. We are excited here in Pacasmayo! 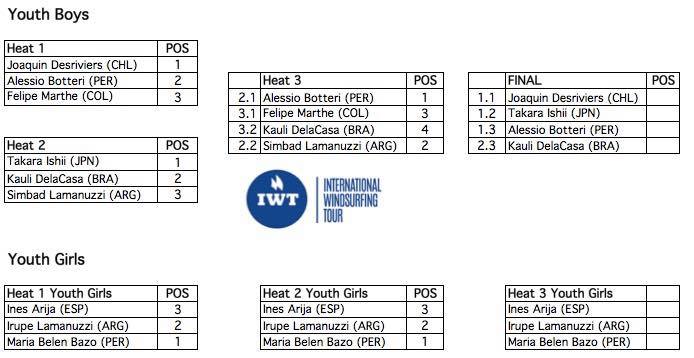 • Update from yesterday’s report where Adrian Levy from Australia was omitted. We would like to congratulate him for his outstanding performance in the Expression Session yesterday winning the Masters category with long clean aerials and aggressive wave riding. Onya mate!

• A note about one of the IWT’s top riders, Sarah Hauser. She is committed to raising awareness through sport. Her press release follows. 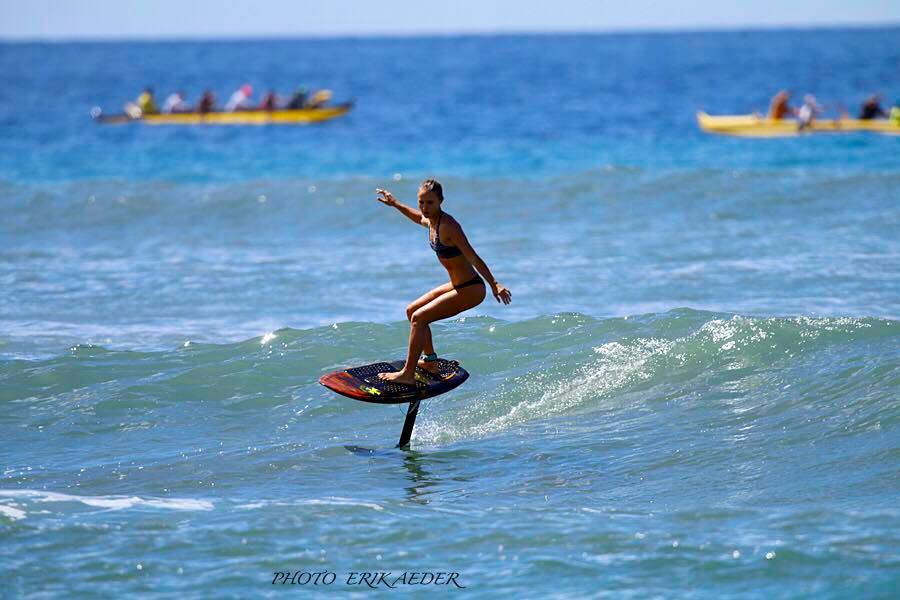 On Monday July, 30th 2018, Hawaii resident and professional ocean athlete Sarah Hauser launched a fundraising campaign benefiting the non-profit Beyond the Surface International. Between September 10th and September 22nd she will be attempting to catch the longest wave of her life on a hydrofoil surfboard along the coast of Peru.

During her stay in Lobitos she will collaborate with Beyond the Surface International to help solve a serious water sanitation problem while also empowering the young women and next generation.

With the support of 5 other non profits (Waves International, Changing Tides Foundation, Beyond Boardshorts International, Ocean Conservancy, Raynier Institute & Foundation) they will bring water filters to Lobitos and train local school age girls on how the filters work and then teach and assist them in creating an instructional video on how to use them. Their work will be the first step in a clean water project and a catalyst for an innovative solution. It will also help cut down on single-use plastic!

Other activities will take place to inspire, empower, and educate the children such as a movie night, surf lessons, media art workshops, and a beach clean up.

The money raised through Sarah’s challenge will go to Beyond the Surface International. It will help buy and bring more water filters, purchase second-hand cameras for the girls to continue learning and making stop-motion animations, participate in photography workshops, or take surf classes, etc…

Donations can be made at go.rallyup.com/fly. It is possible to give a fixed amount or to donate for each second you think Sarah can stay on 1 wave (with a set limit for the donation). Sarah will use her GoPro to prove her record.

Sarah shares her journey through social media (Instagram: @hauserlifestyle, Facebook: Sarah Hauser) and a short film will be produced to share this “Water & Women” adventure with the world.