The Masters And Grand Masters Impress On Day Six 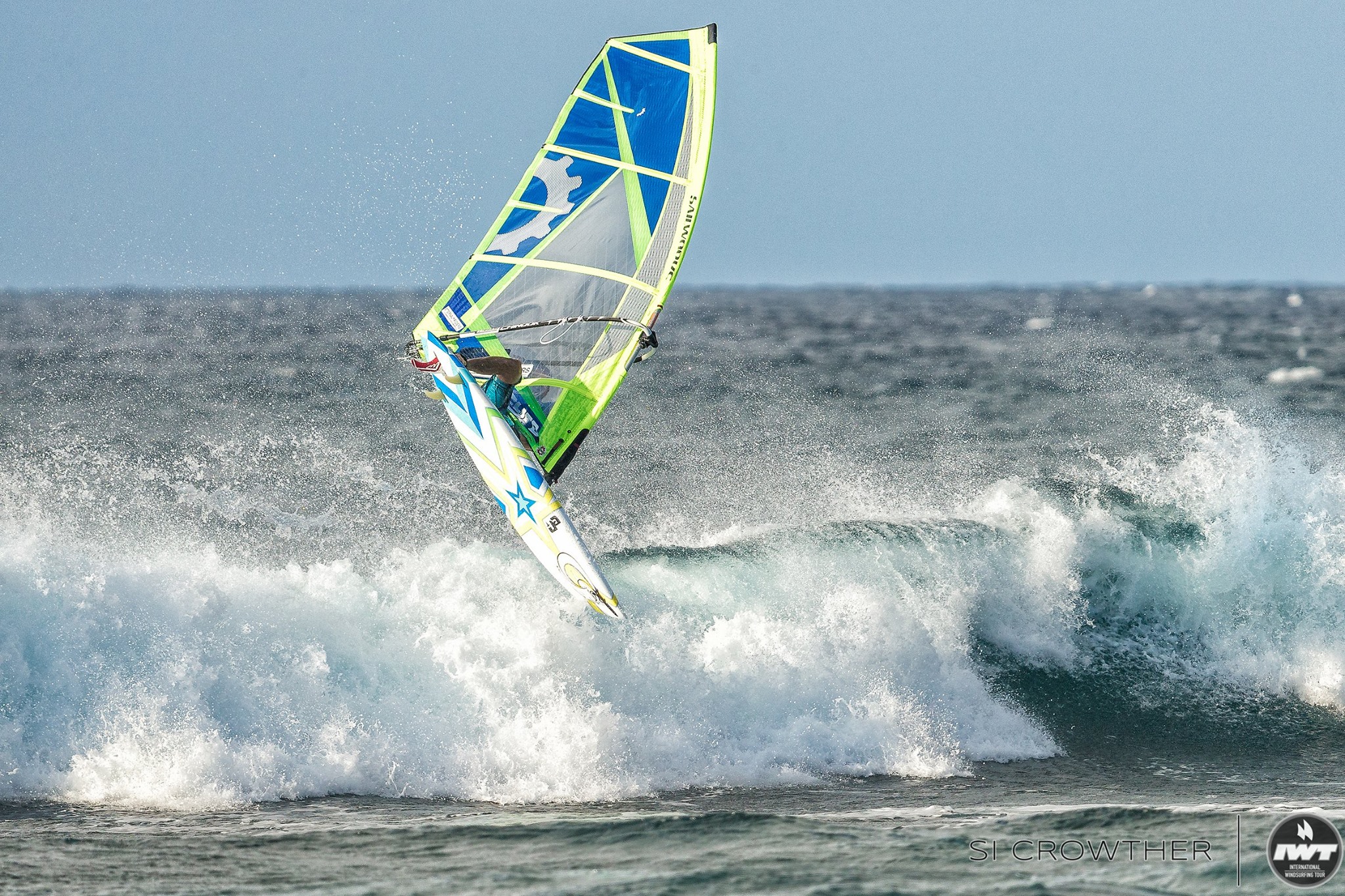 The wind was blowing as we arrived at the beach this morning, so it was straight into the Grand Masters and the Masters divisions. These fleets are a mix of local legends, tour veterans and highly-skilled riders from across the world. Don’t let their ages fool you, these guys will be going big at Ho’okipa for many more years to come.

We ran the day (mostly) with 18-minute heats and 2-minute transitions, with 2 wave scores to count. Whilst we had a few more knots of wind than the previous day, the swell had dropped a little. It was still pulsing through however, making it as important as ever to wait for the best set waves. We were on the verge of adding a jump into the mix, but despite some of the guys busting forward and back loops to impress the crowds, the conditions weren’t quite there…maybe tomorrow!

“The stand out sailor today, just going into the Grand Masters age group this year, was legendary Greg Aguera. He had the highest heat totals of the day and was really ripping it up. Big shout out to him for sailing so well! Aguera has made it into the final, and if he can continue with that kind of form he’s going to be tough to beat. Colin Baker has been putting in some good turns too, but Aguera has to be the one to watch. 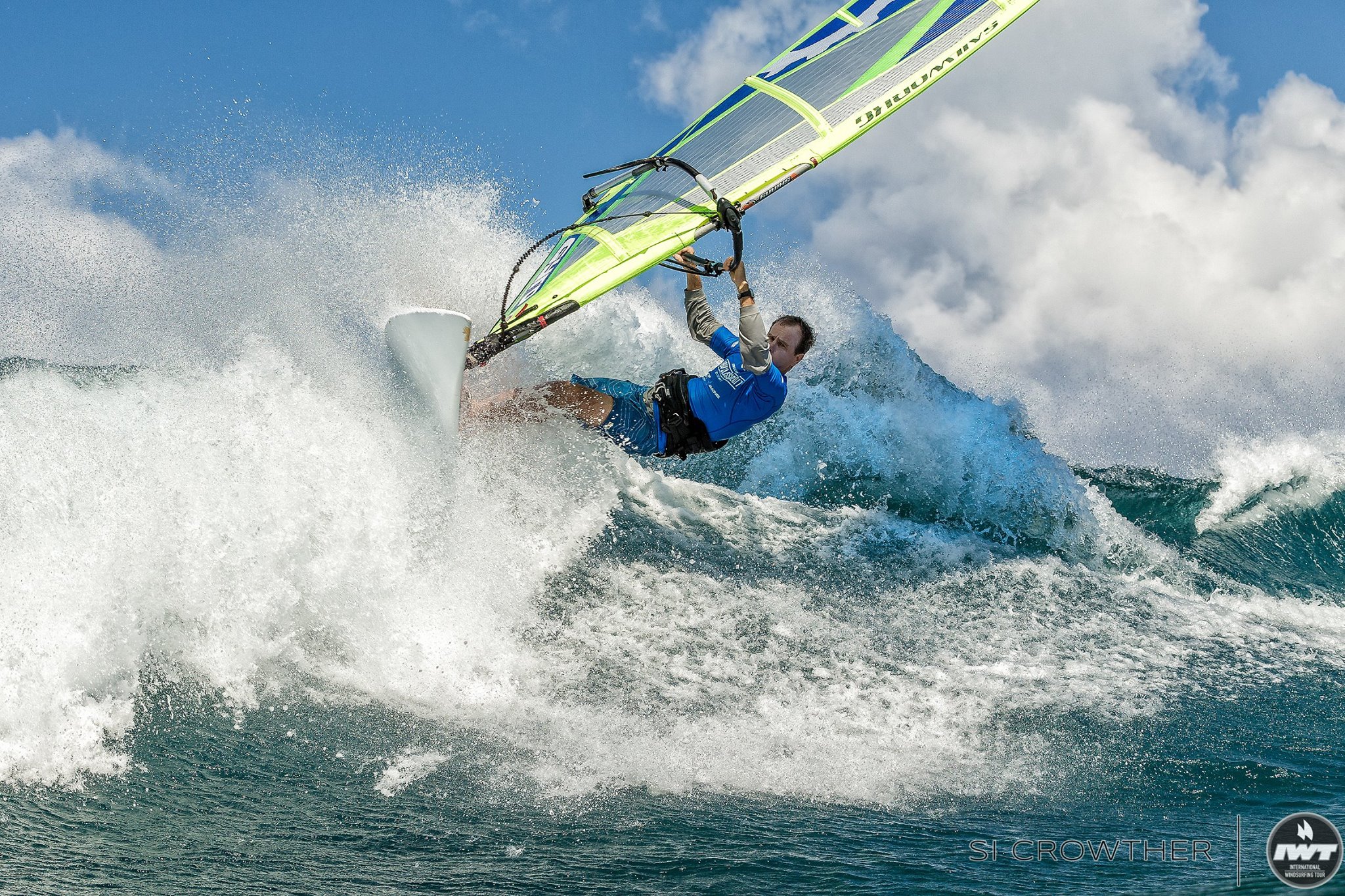 “In the Masters, Michi Schweiger has been ripping. Pascal Hardy, when he’s on, has been threatening, but he was a bit hot and cold today. I would say the likes of Schweiger, Sean Aiken and Kai Katchadourian have been more consistent so far. We got up to the second semi-final in the Masters but had to abandon the heat. That was the first heat we cancelled in the contest; there wasn’t really enough to differentiate between the riders in that heat, which is why we cancelled. Schweiger had got his waves, but the other 3 hadn’t – when they did get waves there just wasn’t the wind on the wave to be able to do much with it.

“The second semi-final of the Masters will be a close battle when we run it again; Paul Karaolides sailed very well in his first round heat and took the win against Hardy, Ferdinando Loffreda and Bergeron, it is going to be very tough which is why we wanted to see it in better conditions, to make it less of a lottery. 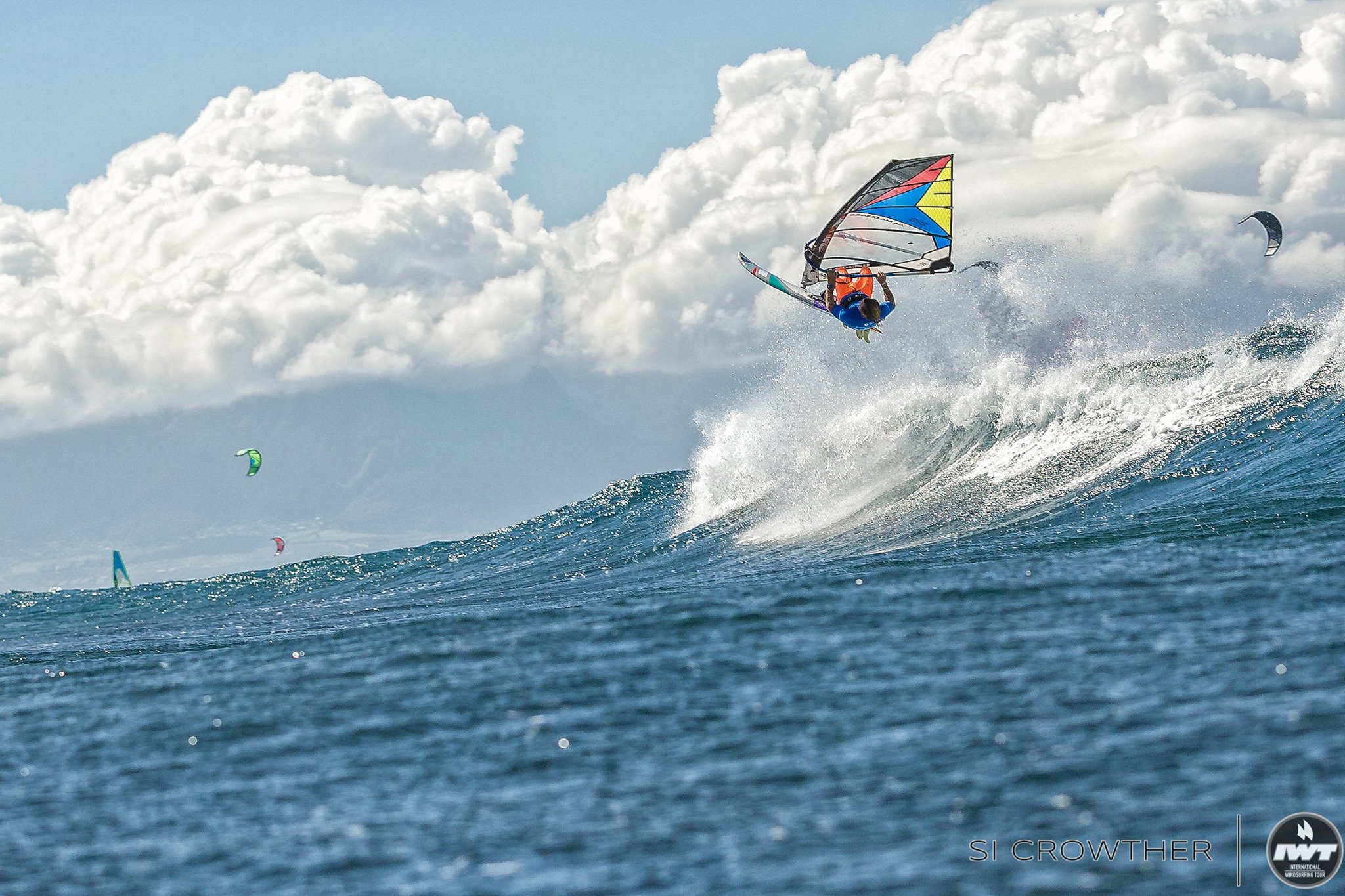 We opened up the day at 11am with Grand Masters (55+ years) heat 1 and Tom Garcia’s stylish rides. The waves were relatively small this morning, so it was a bit of a waiting game. Rob Funk really stepped it up in heat 2, getting that little bit more critical than we had seen from the riders before him. Scott Shoemaker was a late addition to the bracket, but proved he should have been in the contest all along, taking second place in this heat.

In heat 3 it was time for Greg Aguera to shine again; Aguera struggled to find a good wave in the first half of the heat, whilst Colin Baker took a couple of set rides with great hacks; but, then Aguera spotted a bomb out the back, gybed on and laid down an 8.5 score with a two aggressive, vertical smacks. Both riders followed up with another good scoring wave, but it was Aguera who took the win with a 15.23 total.

It was Paul Cassidy that rounded off the first round of the Grand Masters with the heat win. Cassidy showed some great wave selection in the smaller conditions, and really made the most of each ride.

At almost 2pm, after some Masters heats, it was back into the Grand Masters, where the second round provided another chance for the riders that didn’t advance from the first. After just losing out in his first heat, Colin Baker was on a mission and showed just what he is capable of with a couple of 5+ point waves, giving him the win. Shoemaker won the next heat by scoring some solid turns, in-between some fairly brave (and close!) jibes around the rocks. 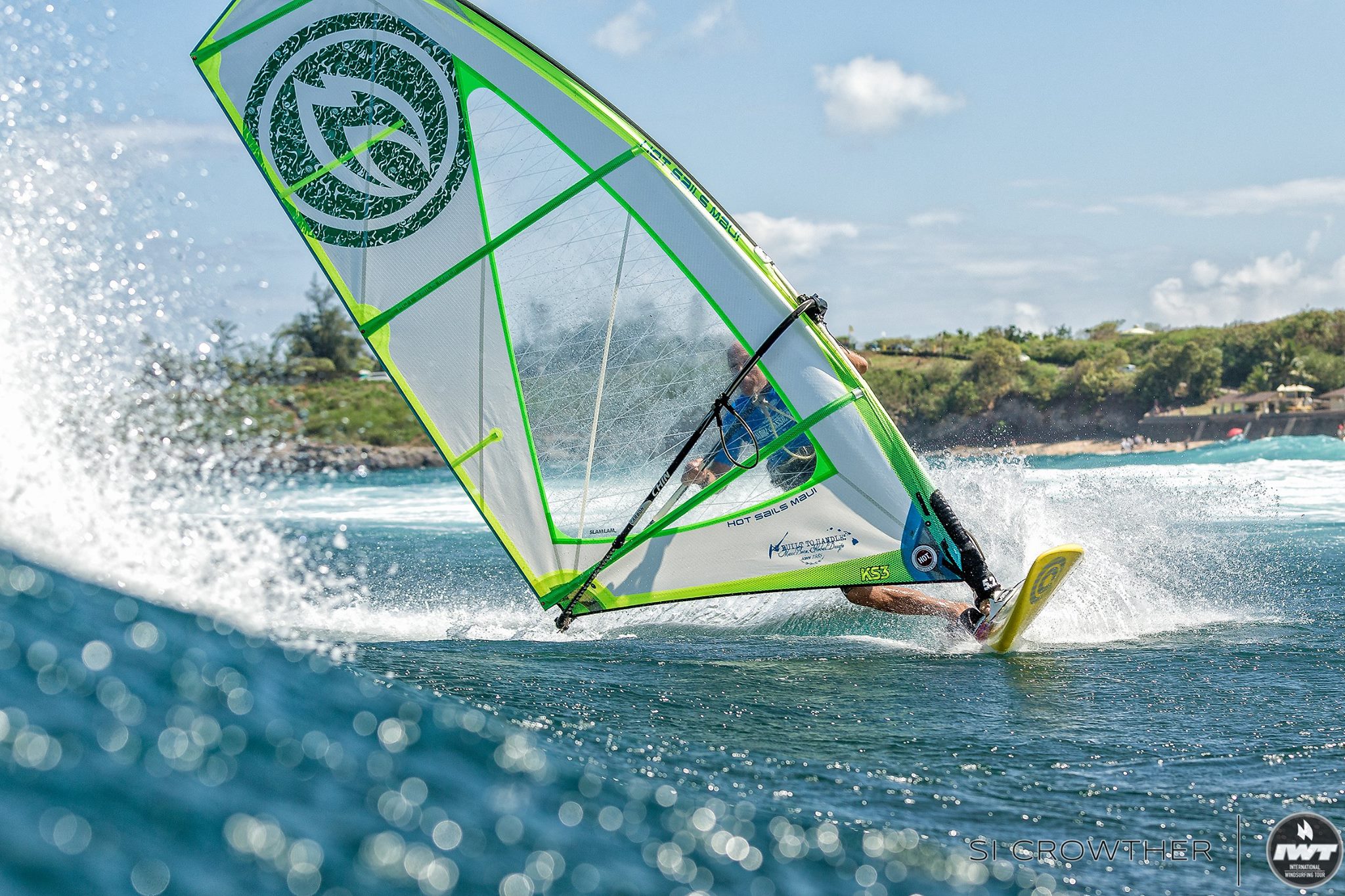 The semi-finals of the Grand Masters were impressive, by any standards; Baker continued to fight through, taking another win, with one more well put together heat. Rob Funk also showed, again, why he deserves a place in the final and is a key name in this division. In the second semi it was all about Aguera again, who showed his dominance in this fleet with a couple of 6+ point waves; Aguera really laid down what the judges are looking for in these conditions, picking off the best set waves and hitting them right in the critical section. Mike Colee also put in a great performance, taking the last spot in the final.

In the first round of the Masters it was Sean Aiken, Brian Talma and Glenn Haslbeck that all put on a show, with a very close and extremely busy heat. These riders picked off 8 to 9 waves each, with less that a point separating the 3 of them at the end. But, it was Aiken who just had the edge over the other two, with a slightly more aggressive style.

Kai Katchadourian was the man to watch in heat 2, as he threw some trademark spray to put him ahead of the other riders. Heat 3 saw 5 men take to the water, in a stacked heat; it was Paul Karaolides, of Fishbowl Diaries, who stood out to the judges with great wave selection and vertical turns, putting together the best heat. Just behind him, less than 0.2 separated Patrick Bergeron and Ferdinando Loffreda, with Loffreda just taking second place. The final heat of the first round of the Masters saw Michi Schweiger put on an awesome display, with two 6-point waves giving him the win. 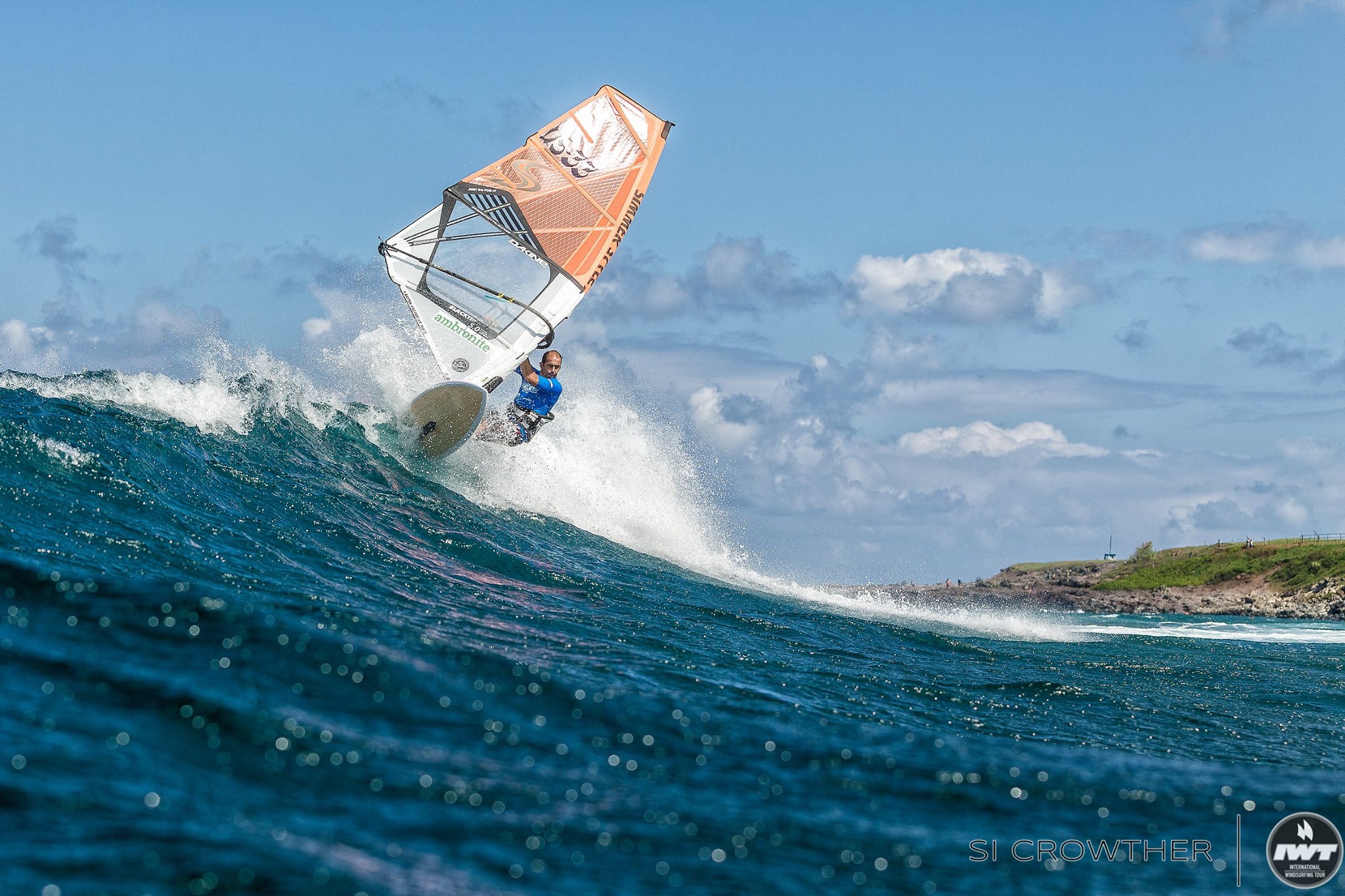 Heat 5 of the Masters, which was the only heat in round two, opened up with both Patrick Bergeron and Pascal Hardy going full power. It was clear right from the start of this heat that they were both gunning for the win. It went right down to the wire, with Hardy needing a 5.8 wave to take the win… it was close but his last wave scored him a 5.5, giving the heat win to Bergeron, though both riders advanced to the next round.

In the first heat of the third round, Loffreda just snuck ahead of Loris Laezza taking the win with his full power style. Heat 7 was a close battle between Taun Masterton and Martin Bergeron. Bergeron got wave after wave, but it was Masterton that took the win in the heat by just 0.07. Hardy opened up heat 8 with a well-chosen wave, that he went for broke on, hitting the lip and landing a clean aerial. Haslbeck tried to answer back, and came close, but couldn’t take the top spot from Hardy this time. Heat 9 was all about Patrick Bergeron, who stuck two solid, well-scoring waves at the start of the heat and couldn’t be caught.

The first semi-final of the Masters saw Katchadourian show why he is such a well-respected rider here at Ho’okipa. He grabbed two good waves right off the bat, which was a difficult task with the lightening winds and erratic swell. Aiken looked like he struggled to find his form at the start of the heat, but then picked off a decent set wave and showed that Aiken-style that we’re all used to seeing. Loffreda and Masterton also put in some good scoring waves, but just couldn’t catch the other two. So, it was Katchadourian and Aiken that advanced into the final. 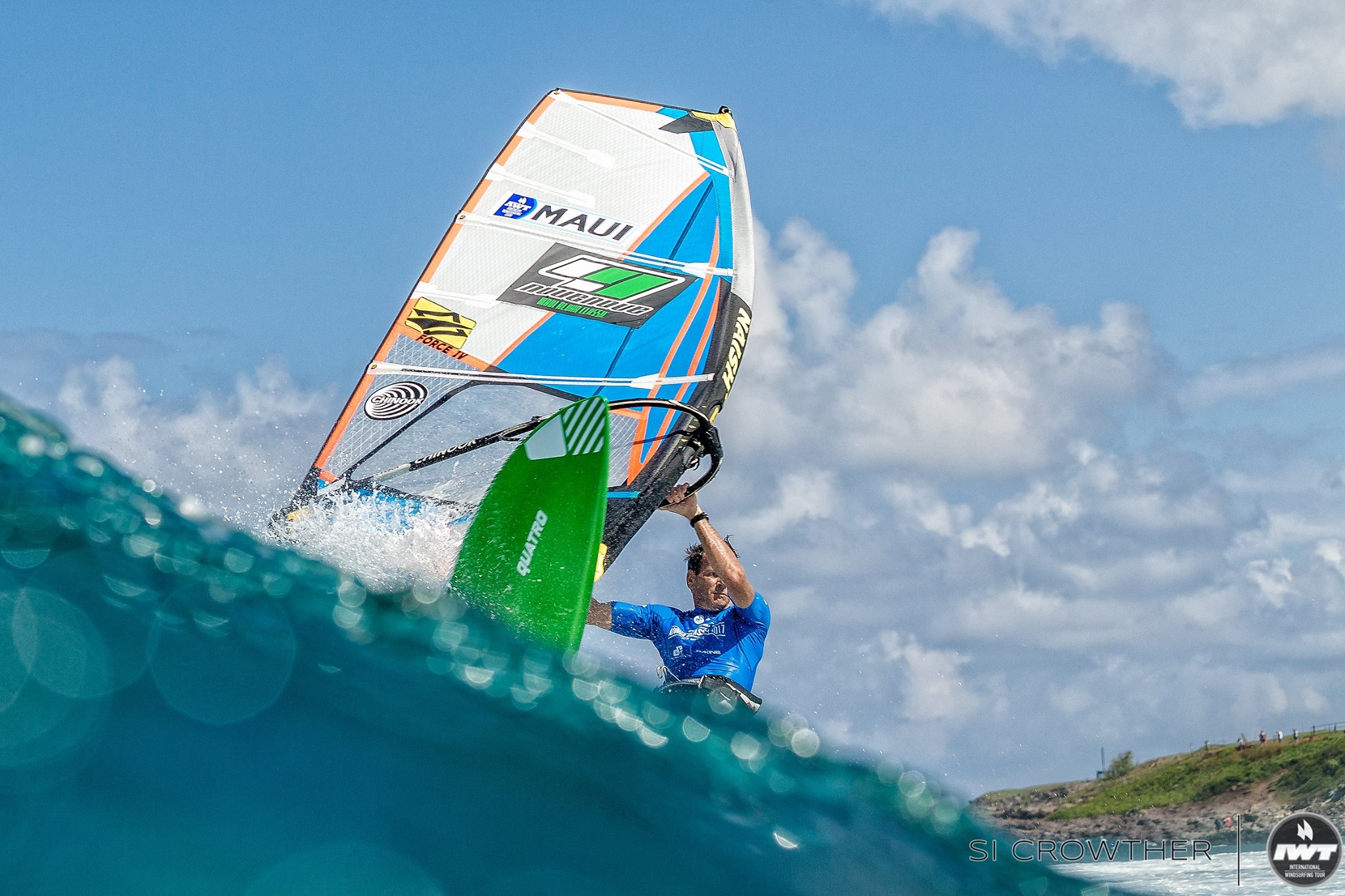 We started out with the second semi-final at around 4:30pm, but the wind was dropping even more, with fewer set waves rolling through too. Schweiger managed to notch up a couple of decent scores by getting onto the few set waves that did come through, but the other riders were just not able to do the same before the wind totally dropped around half-way through the heat. With the places in the final up for grabs and not enough opportunities for a fair fight, the heat was cancelled and competition for the day was brought to a close.

All divisions are on standby for tomorrow! Skippers meeting 10am, first possible start at 11am. See you at the beach…