The youth and amateur riders stepped into the limelight as the wind increased on day five of the Aloha Classic 2017.

The action kicked straight off at 11:15 with 18-minute heats; with slightly more wind today it proved a little easier to catch the set waves when they did roll through. 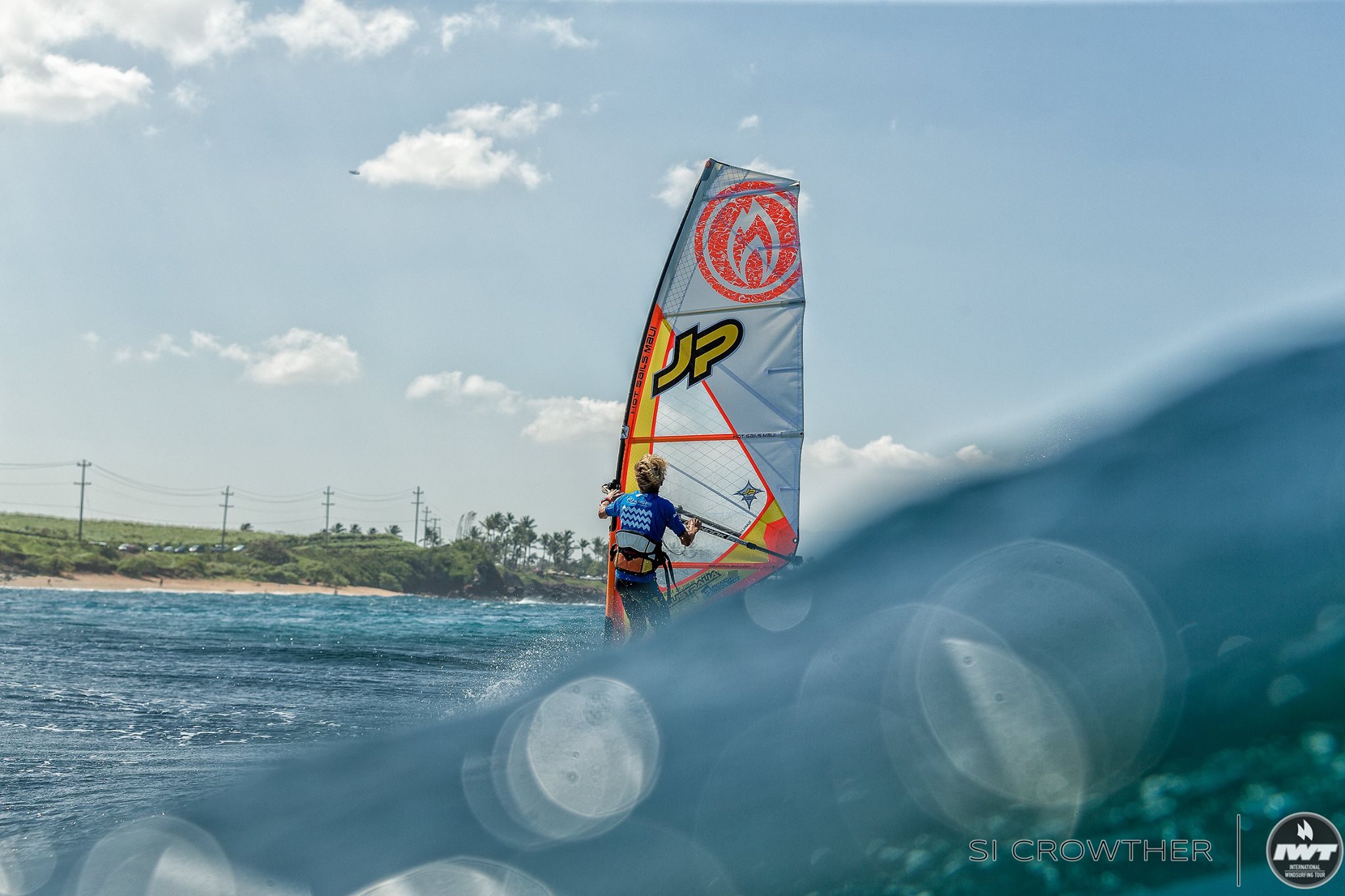 Some of the riders up today were getting their first rides ever at Ho’okipa during their heats; as the wind hadn’t blown for the week or so before the contest there was no warm-up time for many, making the performances on show even more impressive!

Today was an interesting day, I started judging this morning with a couple of heats from the youth – they were very, very impressive! 16-year-old Takara from Japan, who will also be competing in the pro division, was absolutely on fire and I can’t wait to see him rip in some more heats. Then you have kids like 11-year-old Pepe who were out sailing at Ho’okipa and ripping too!

“It is so impressive; I wish I had had the opportunity and ability to compete at Ho’okipa at age 11. Looking back, I think it would have been impossible for me, but windsurfing has progressed so much now and opened so many opportunities for youth riders. These tough conditions command so much commitment and bravery from all riders, especially the youngsters and it was really great to see.

“In the amateurs the French riders Damien Girardin and Yves Masnada and the Spanish guy Victor Moncloa were all super impressive to me. Heat five, I wasn’t judging it but I saw it from the beach, and I thought ‘Wow, I’m glad I’m not judging this!’ The level was very high and super close; it was a very tight heat.

“The conditions were very challenging, but I still saw the amateur and youth riders doing so well. The swell was up and down and some of the waves were really closing out; you could see there was only really the opportunity for a couple of hits on many of the waves. The wind was light, up and down, offshore; there were sometimes two decent sets in one heat and then not so much in the next, This meant the riders really had to be on top of their tactics and in control.

“The riders really proved themselves today and put on a great competition.” 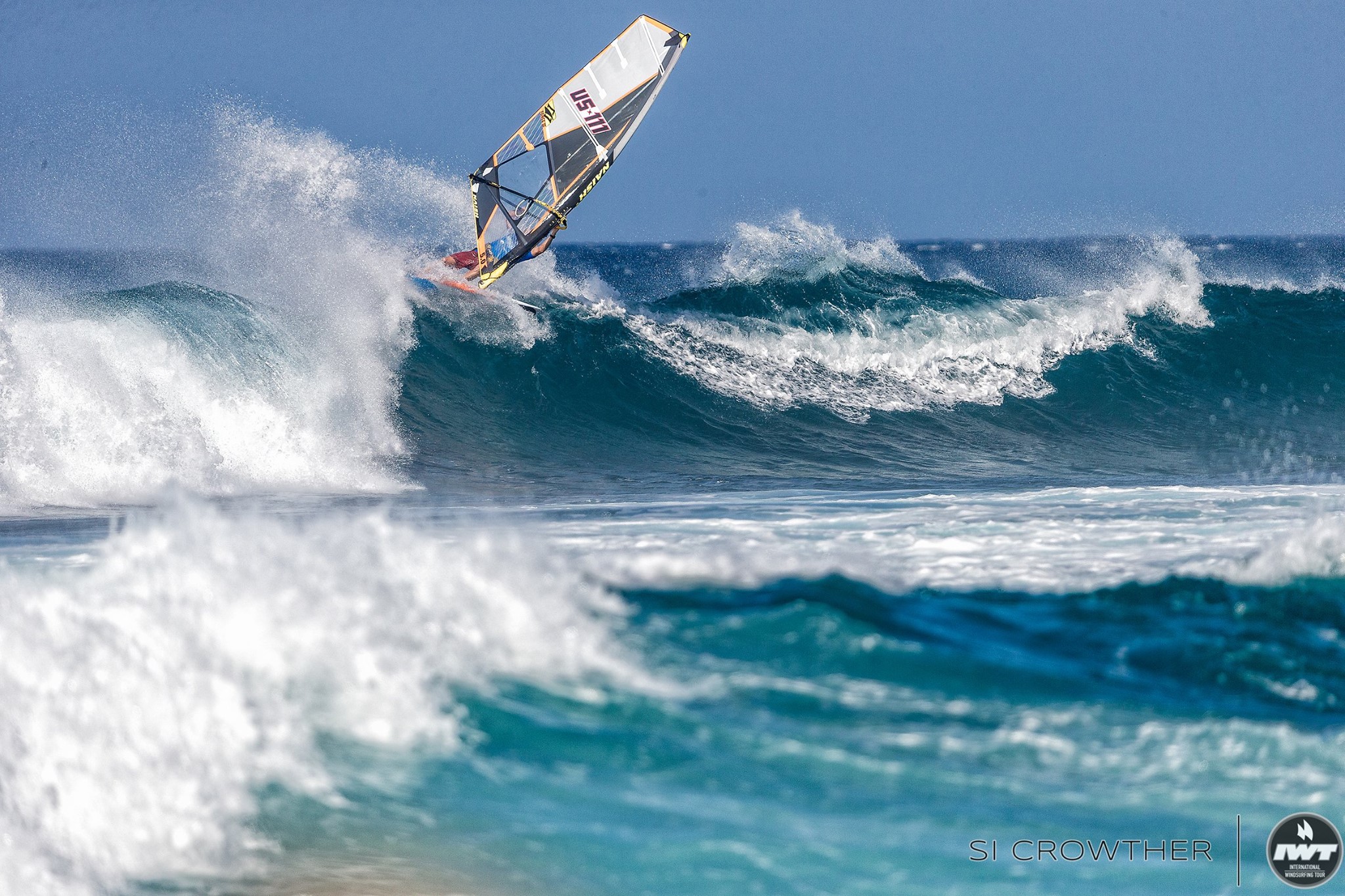 The first heat of the day saw Z Schettewi put in an impressive performance, winning by almost 5 points with a couple of vertical snaps and great style. In heat two it was all about 16-year-old Takara Ishii from Japan who scored an incredible wave, with a massive hit followed by a cleanly landed aerial right off the critical section, giving him the highest wave score of any fleet today. He followed up with a goiter attempt, that he didn’t quite make, and then another top-class wave to round off the best score in the first round of the youth competition. 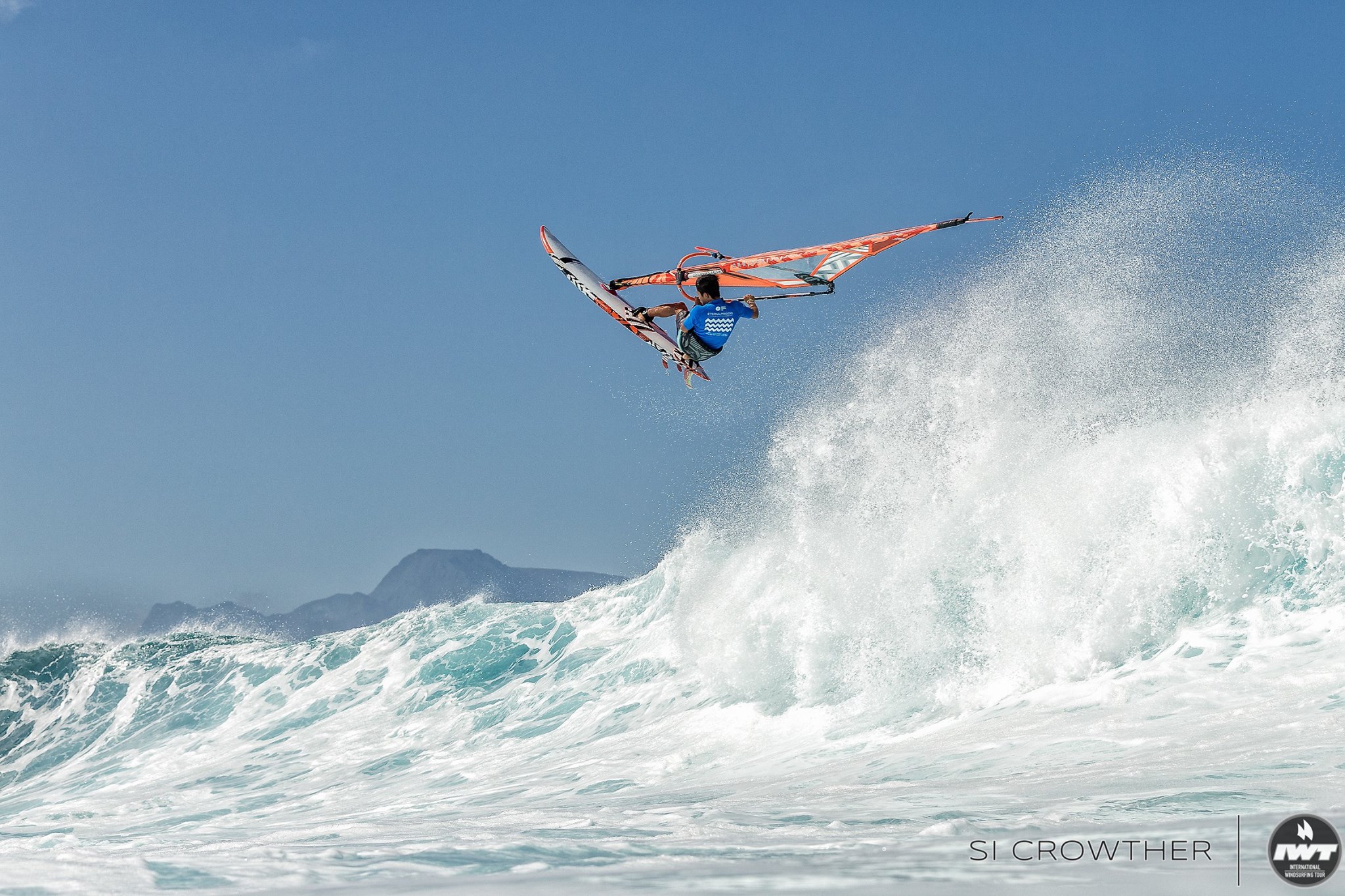 Jonathan Pooley won the first heat of the amateurs with some solid turns, whilst in the second it was Glenn Haslbeck and Z Schettewi again that impressed with smooth turns and the odd aerial. By this point the waves were really starting to build, with the occasional logo high set rolling through. McLaughlin took the best wave and the win in heat 4, with a couple of well-timed hits on a nice set wave.

The standout heat of the first round was heat 5; Damien Girardin opened it up in style, picking up a bomb wave way upwind and riding it all the way, with turn after smooth turn and closing with a well-timed aerial. This gave him a 7.23, which was the top wave score of the first round. Victor Moncloa immediately answered back with a 6.4 and then a 7-point wave. Each of his waves had vertical turns and aerials, which gave him the highest total score of the first round.

In heat 6 Thibaut Imbert put in a great performance, with his first ever waves caught here at Ho’okipa, scoring himself a second place in the heat. Imbert was pushed out by an impressive display of late hits from Loris Laezza. In heat 7 it was all about Jackson Holden, who put in a couple of good scoring waves to take the heat win. Rounding up the first round of the men’s amateur division, it was top seed Tom Soltysiak who stole the show. Solysiak went big, crashing an aerial or two, but also scoring a couple of great scores from his late hits. 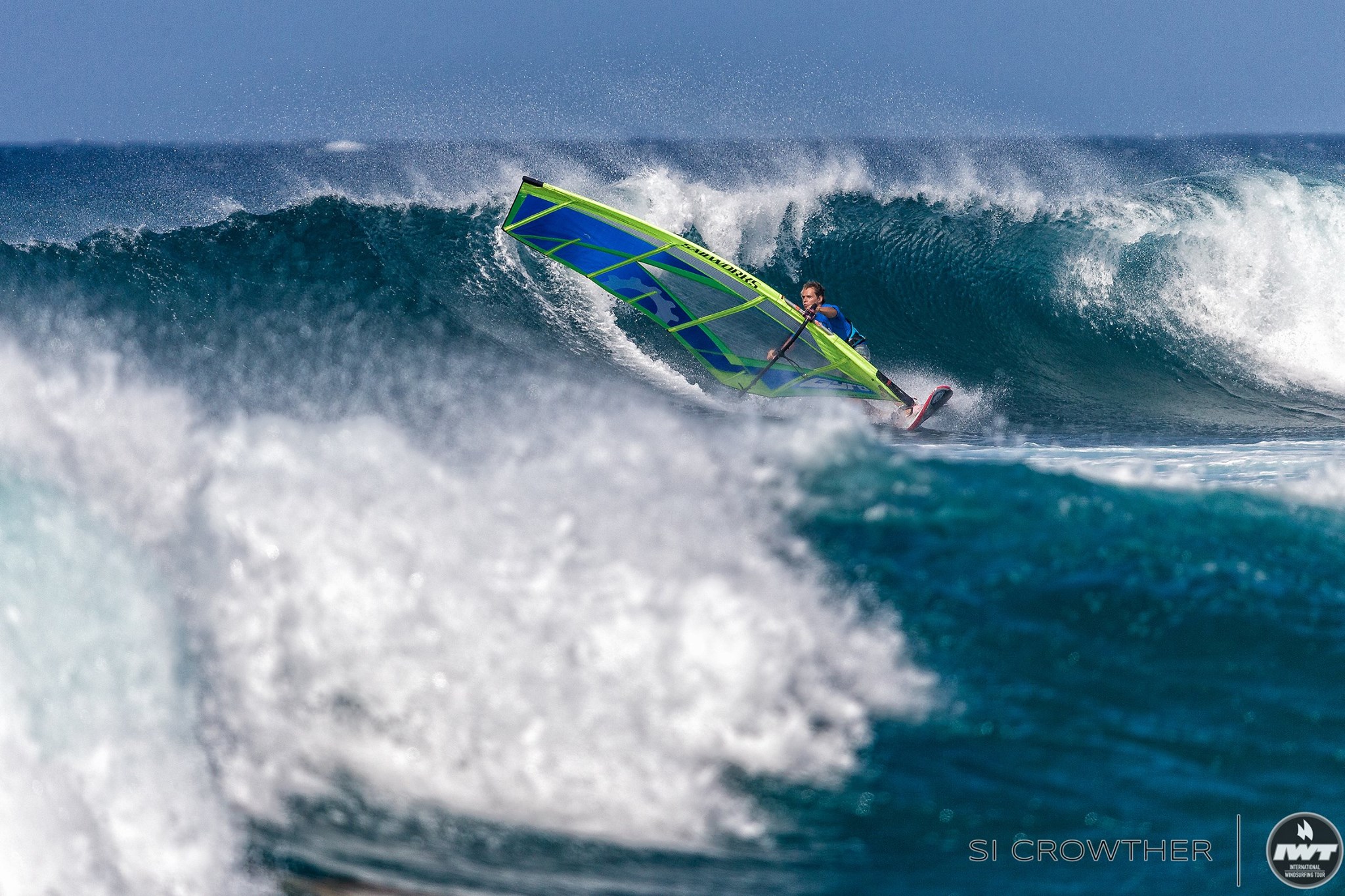 At just before 2:30pm, we got straight into the second round of the amateurs and again Girardin was out to impress. He rounded off a great heat with an 8.13 wave (highest wave score of the day in the amateur fleet), made up of four to five critical turns and an aerial. It certainly got the judges amped, and was exactly what they were looking to see in the conditions today. This wave secured him the heat win and took him through to the next round.

Heat 10 saw Imbert take his slot in the next round, with a couple of good scoring waves and in heat 11 it was Roman Ratusnik, who just snuck the win ahead of David Servera. As we got into heats 12 and 13 the wind was starting to look a little lighter, making the occasional sets even harder to catch. Heat 12 was a close battle between all three riders, but it was Naldi Sagripanti who snuck ahead of Carl Grundy and Franco Fornero, with the more consistent rides. Mike Colee took the win in heat 13, before Masterton and Z Schewetti did battle in heat 14. Both Taun Masterton and Z Schewetti scored some solid waves, but it was Masterton that just edged ahead by going a little more critical. 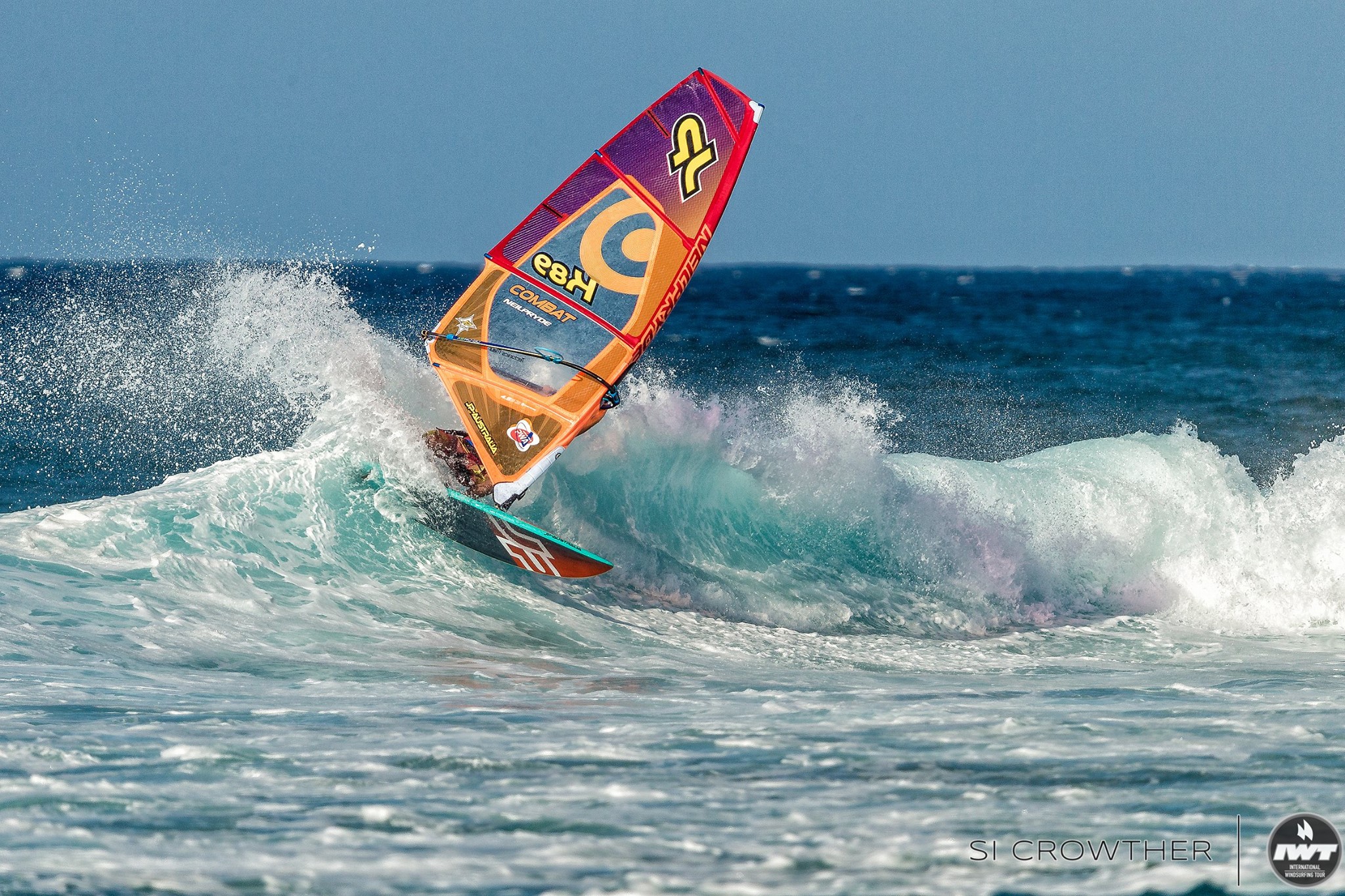 Heat 15 was the return of Greg Aguera, who had missed the first round due to work commitments; Aguera took this heat with the second highest heat score of the day. The Maui local, who has just turned 55 and is well known, along with his brother, for being fundamental members of the PBA, earned himself two 6.5 wave scores. He will certainly be one to watch in the later rounds with his aggressive style and great wave selection.

The final heat of the day dominated by Simeon Glasson, who rounded off a successful day of competition nicely. 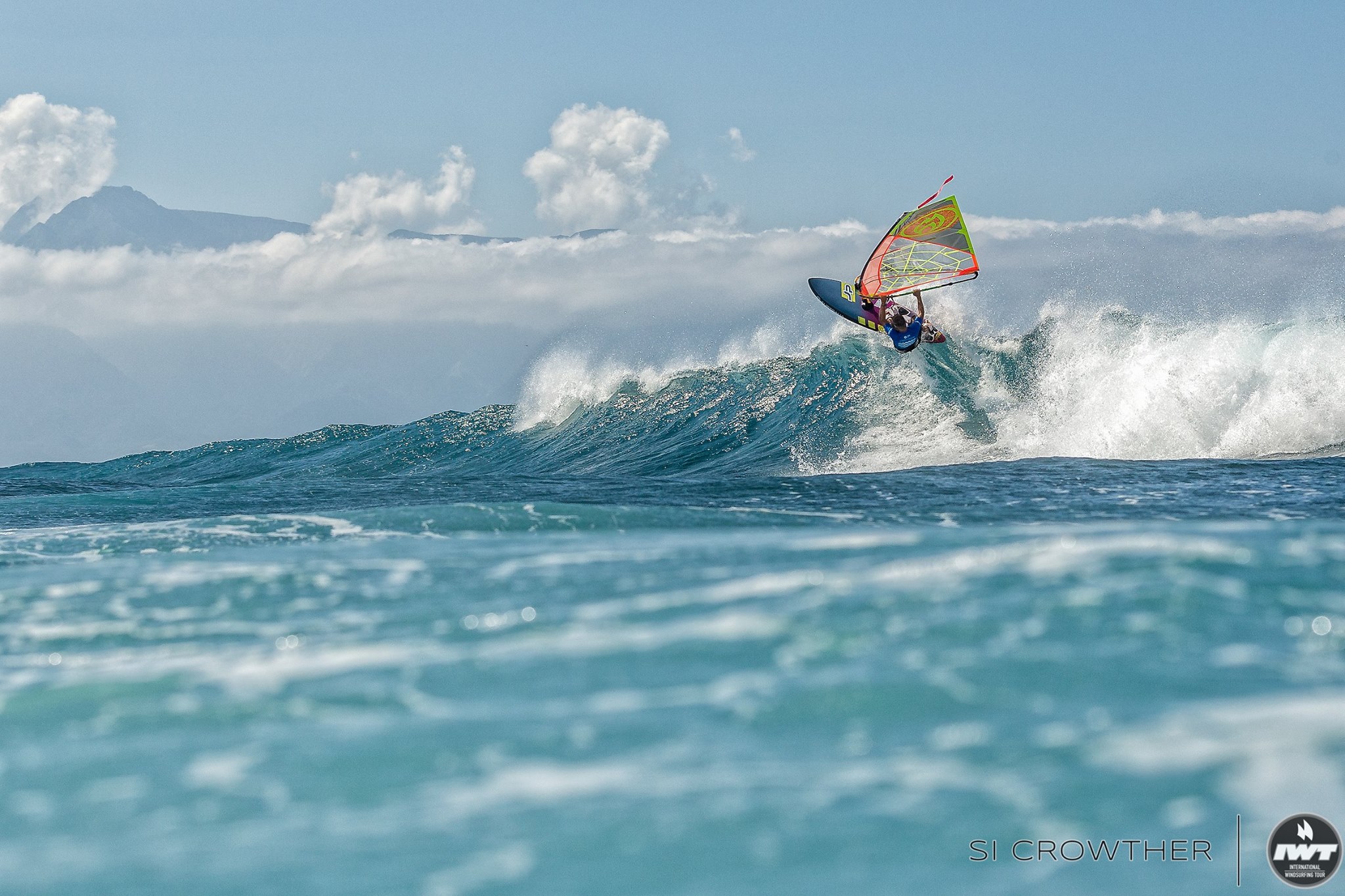 The wind looks good with the swell rising throughout the day. Amateurs, Youth and Pro Women are released. Focus will be on the start of the Masters and Grand Masters, with the potential of running the Pro Men in the afternoon.

Skippers meeting 10am, for a first possible start of 11am. 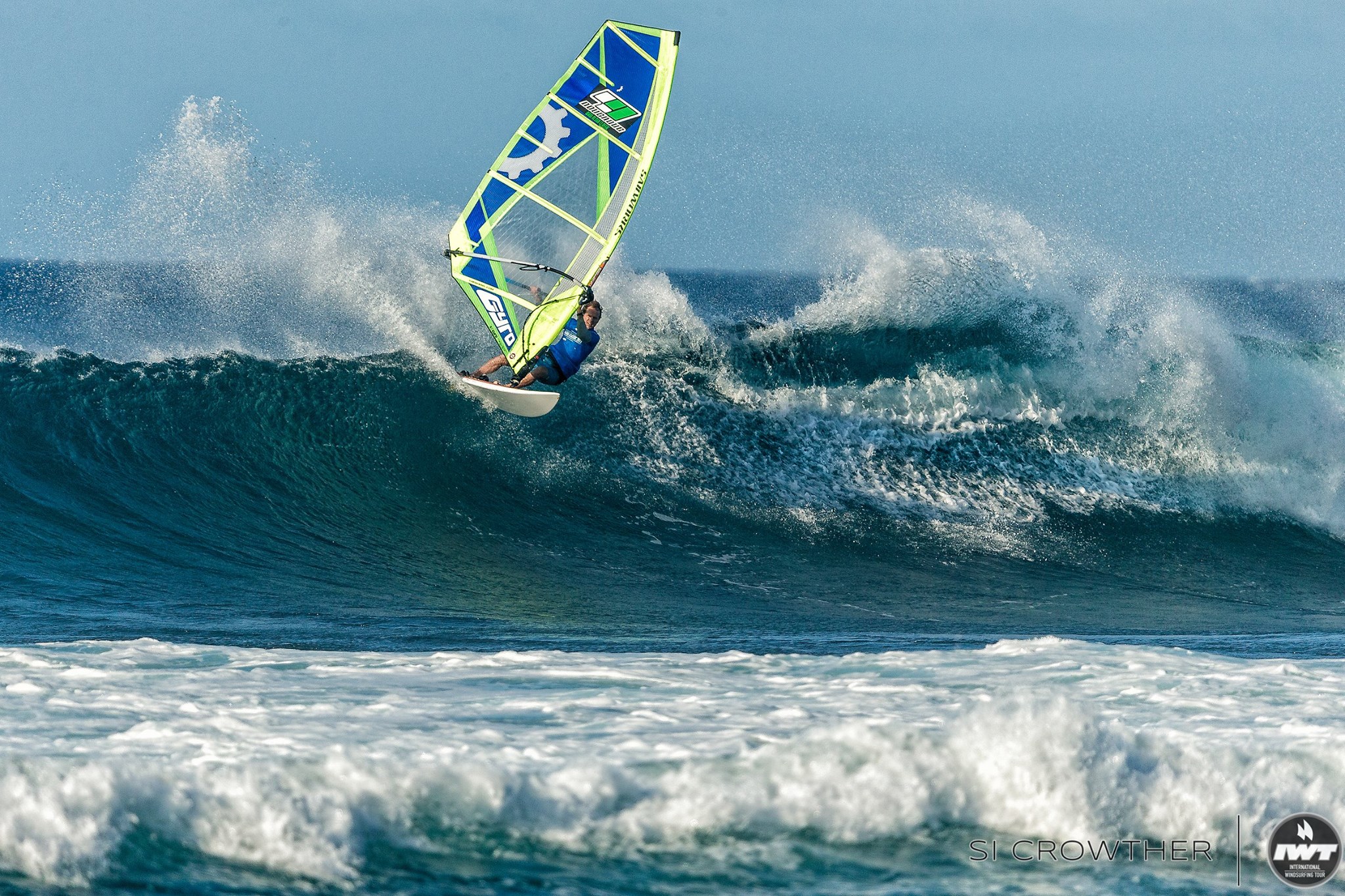