We were greeted with wind, small waves and a lot of rain this morning at Ho’okipa. It took a while for the weather to settle, but when it did it was time for the Pro Men to hit the water, with 48 riders in this bracket we really needed to get started.

The wind was a little more cross-shore than yesterday, and was up and down as the rain and squalls came through.  The swell was pulsing, with the occasional good set of waves rolling through, so the decision was made to start with 20-minute heats, with 2 waves to count.

We started today with heat 3 of the first round of the Pro Men, which featured local legend Kai Lenny. Lenny picked up a good set wave early on and gauged out some nice turns, to start him off with a 7-point wave. Loick Lesauvage was hot on his heels, with some stylish rides of his own. 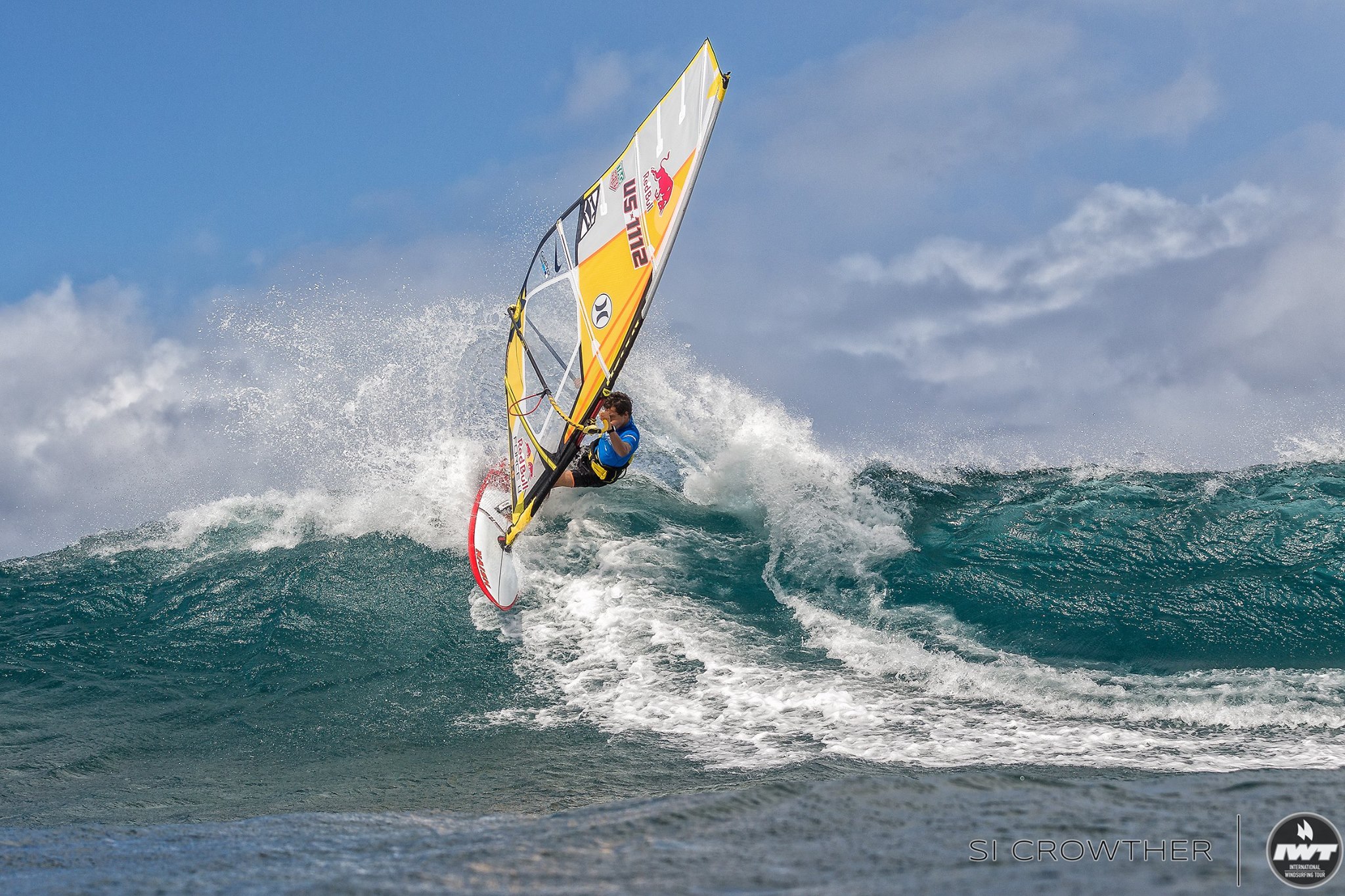 Yves Nicoul, in heat 4, was one of the standout sailors of the day. He racked up an 8-point wave, complete with a cleanly landed a goiter and some nice hacks. Nicoul followed this up with a 6-point wave to give him one of the best heat scores of the day, and put him ahead of Porcella in second. 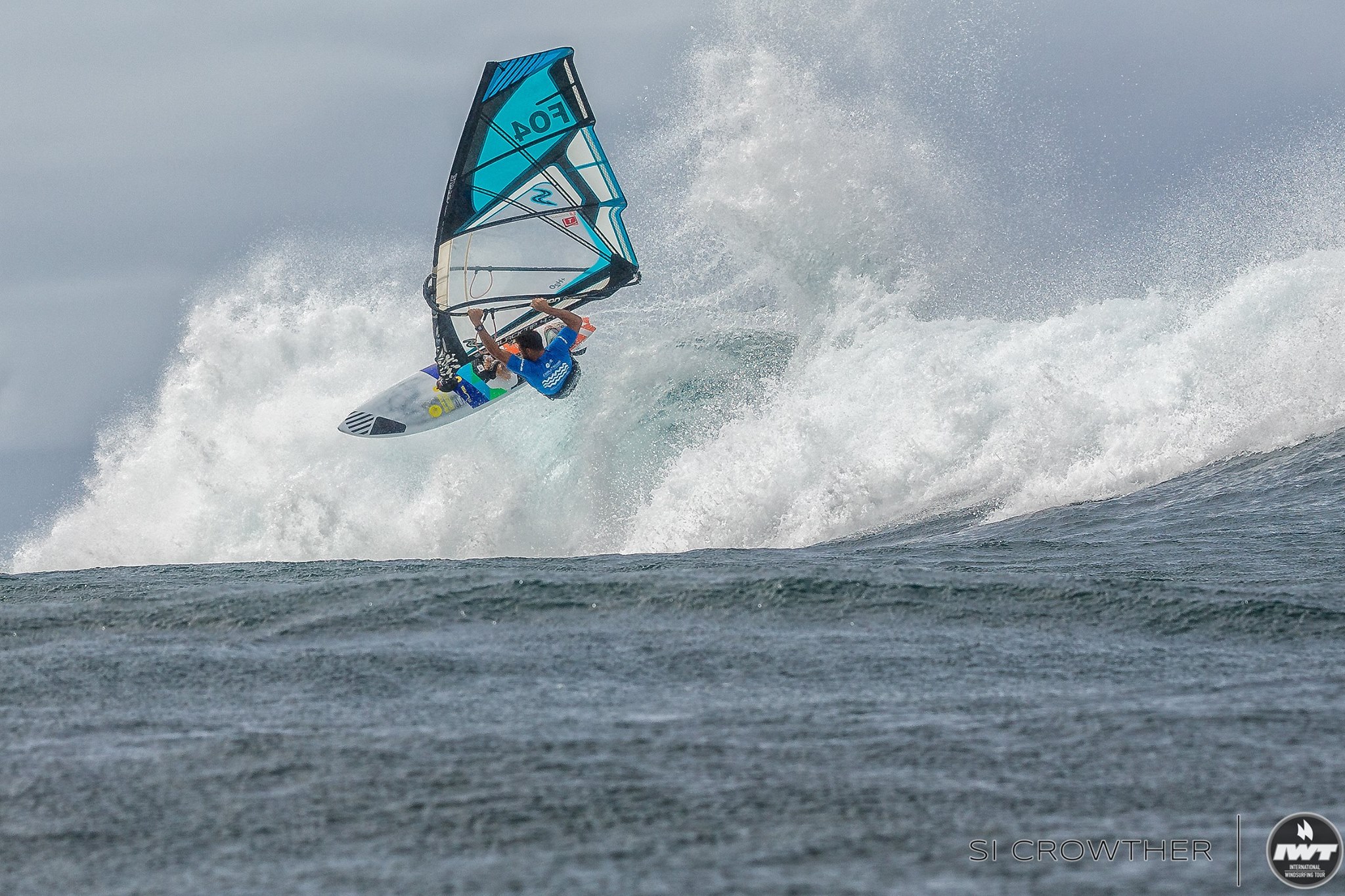 Into heat 5 and the wind was still blowing well (if a little gutsy at times), with some good sets coming through, Graham Ezzy may have got the fewest number of waves in this heat, but it was quality over quantity and he finished just ahead of Brian Talma.

Morgan Noireaux was absolutely on fire in the next round, stomping an 8+point wave with some vertical turns right in the pocket and some decent air too. Federico Infantino was hot on his tail, with some solid hits of his own.

Takara Ishii, who has already proven he is one to watch in the Youth division, was out to impress again today. He showed he has great consistency too, putting together an excellent heat to give him the win ahead of Federico Morisio.

Antoine Martin opened up his heat in style with a clean goiter, giving him a great 8 points right on the green flag. Camille Juban tried to come back with a great wave himself, but Martin continued to rack up the scores, which gave him the win in this heat.

Bernd Roediger was the only rider to sneak into the 15-point region for his total heat scores today; he pulled off some tweaked aerials, well-timed vertical turns and failed a goiter, before landing one cleanly to secure the victory ahead of Moritz Mauch. Mauch put together a great heat himself, with excellent wave selection and some impressive turns. 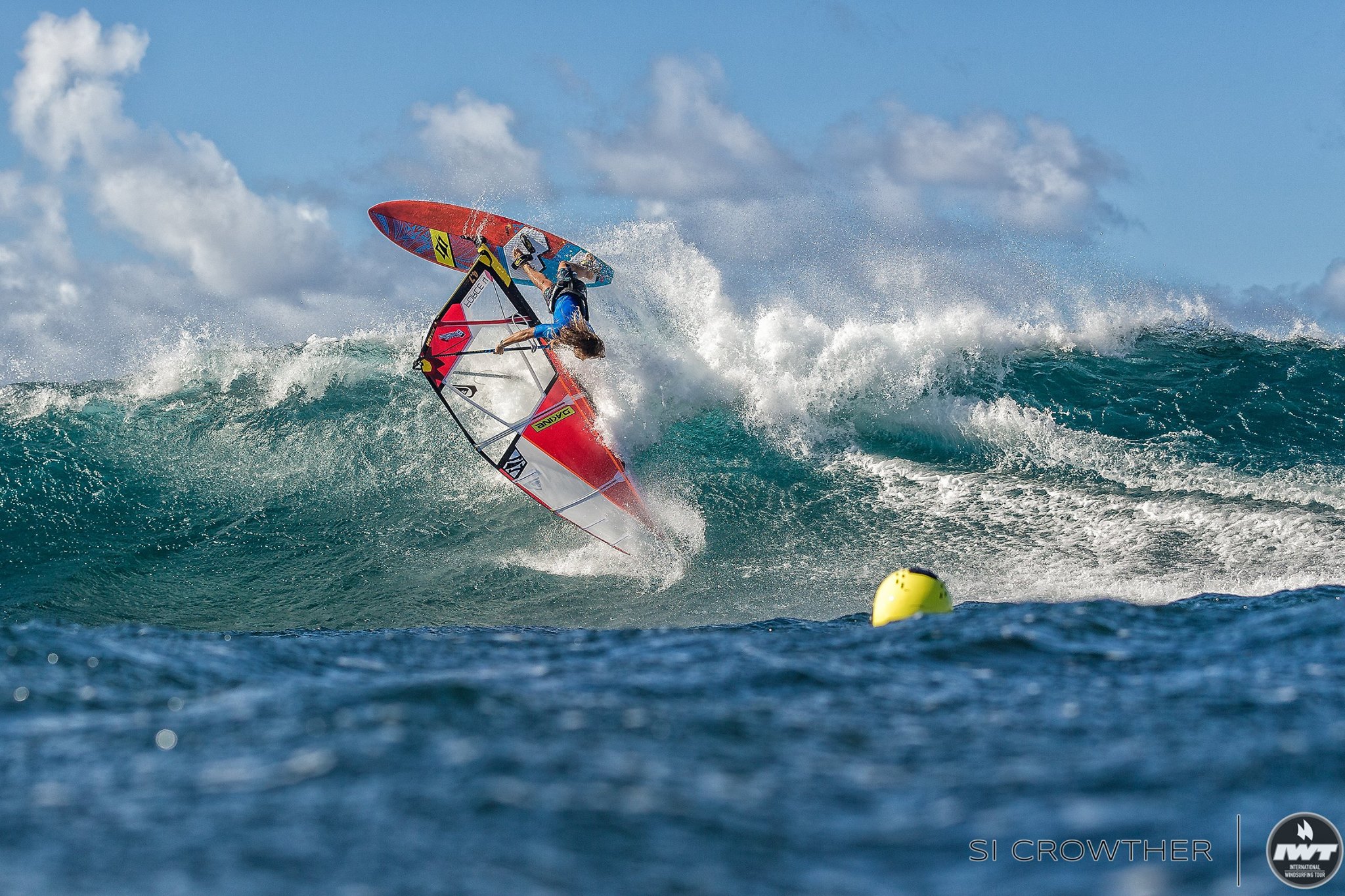 Levi Siver was the man to watch in the next heat, showing his trademark style – full power turns right in the pocket and some floaty airs too. Casey Hauser got a great couple of waves as well, but just couldn’t catch Siver.

Robby Swift opened up heat 11 in commanding style, with an aggressive wave hitting the critical section. Jake Schettewi also proved exactly why he belongs in the Pro fleet, though he couldn’t quite catch Swift as he landed with another 6+point wave. 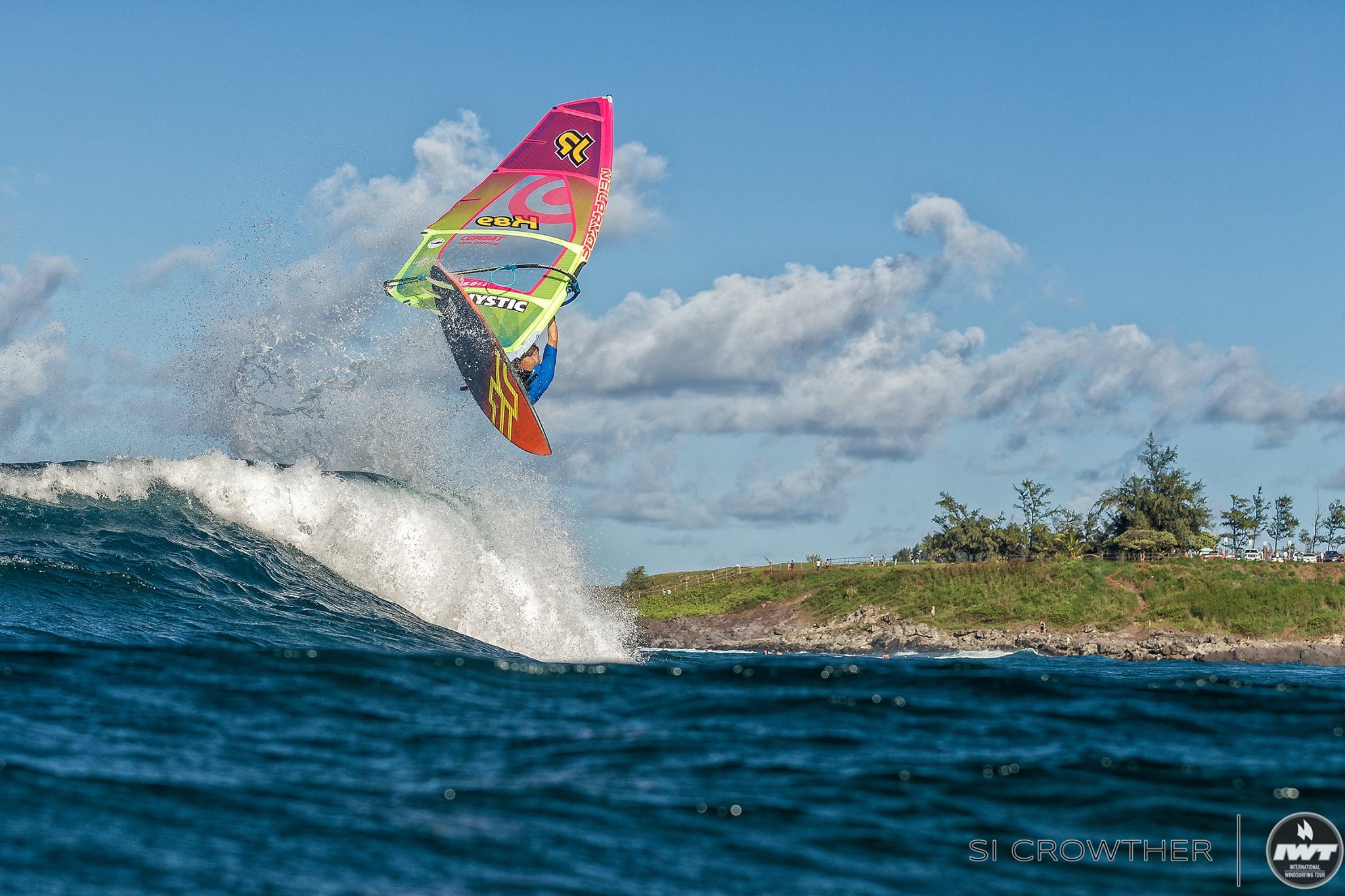 As heat 12 started the wind was beginning to die, making it trickier to catch the few good waves, but Kevin Pritchard didn’t let that stop him as he took the heat win ahead of Bryan Metcalfe-Perez.

With the first round of the Pro Men complete, we just had time to move onto the second round of the women. With the Pro Men we are running a dingle, meaning all the riders that didn’t advance today will get another chance to advance in the next round.

In the first heat of the second round of the women it was a close battle for the two qualifying spots; by this point the wind was even lighter, Serena Zoia and Adele Frola both managed to get onto decent set waves and make some nice turns. Zoia seemed in control of the heat and in the conditions, showing she can perform in whatever is thrown her way!

In heat 6 the wind dropped yet further and, after only Tatiana Howard was managing to pick up and ride the set waves, the heat was called and competition was over for the day. 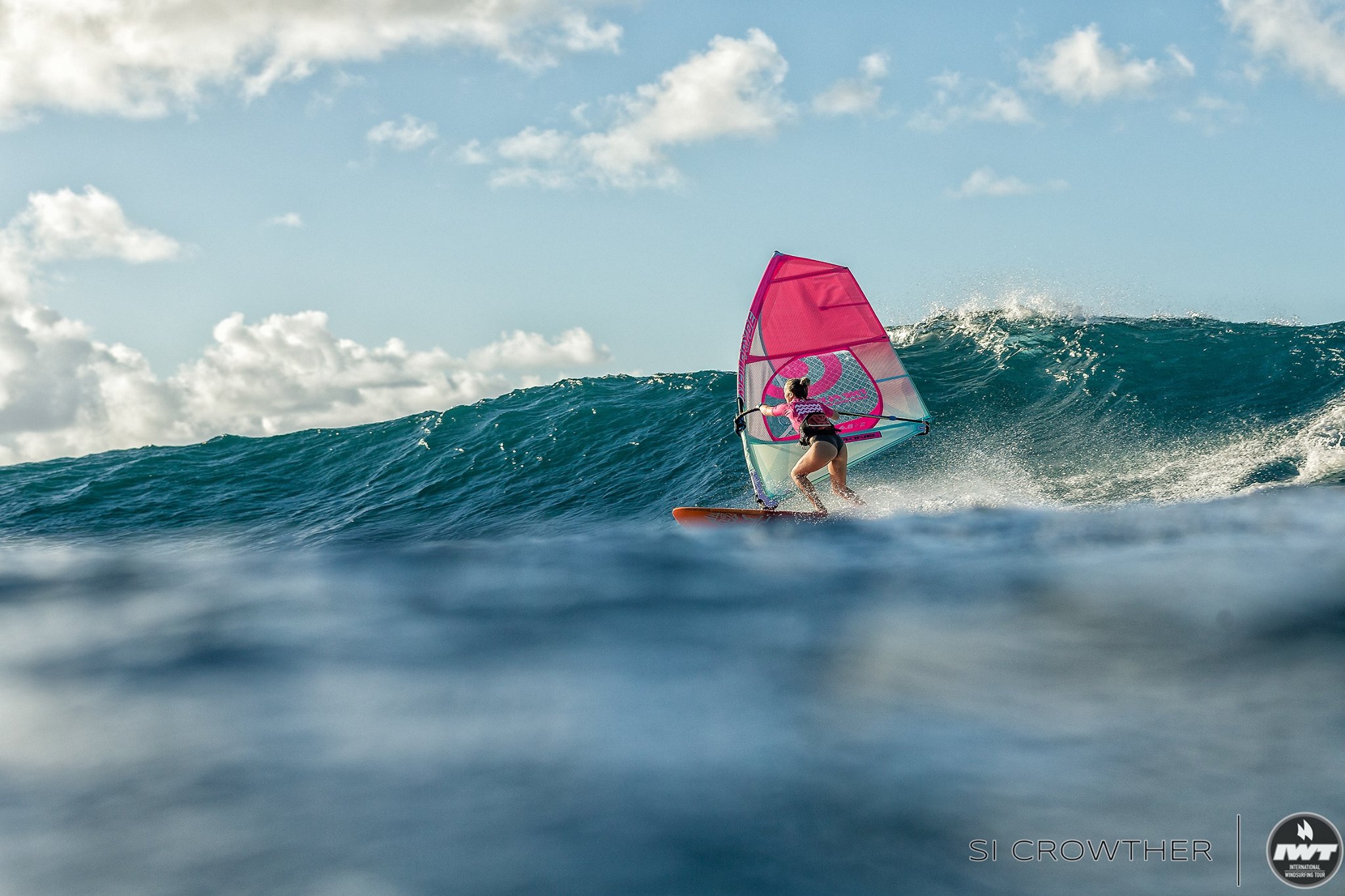 “We started the day with a lot of rain, which was not nice for the contest, but the good vibes from everyone were still there! Then the sky cleared up and we were able to compete, so all was good. I had a great first heat; I’m stoked to be in the third round and super excited to keep competing over the next few days! Hopefully the conditions will get better!”

All divisions are on standby for tomorrow! Skippers meeting 10am, first possible start at 11am. See you at the beach… 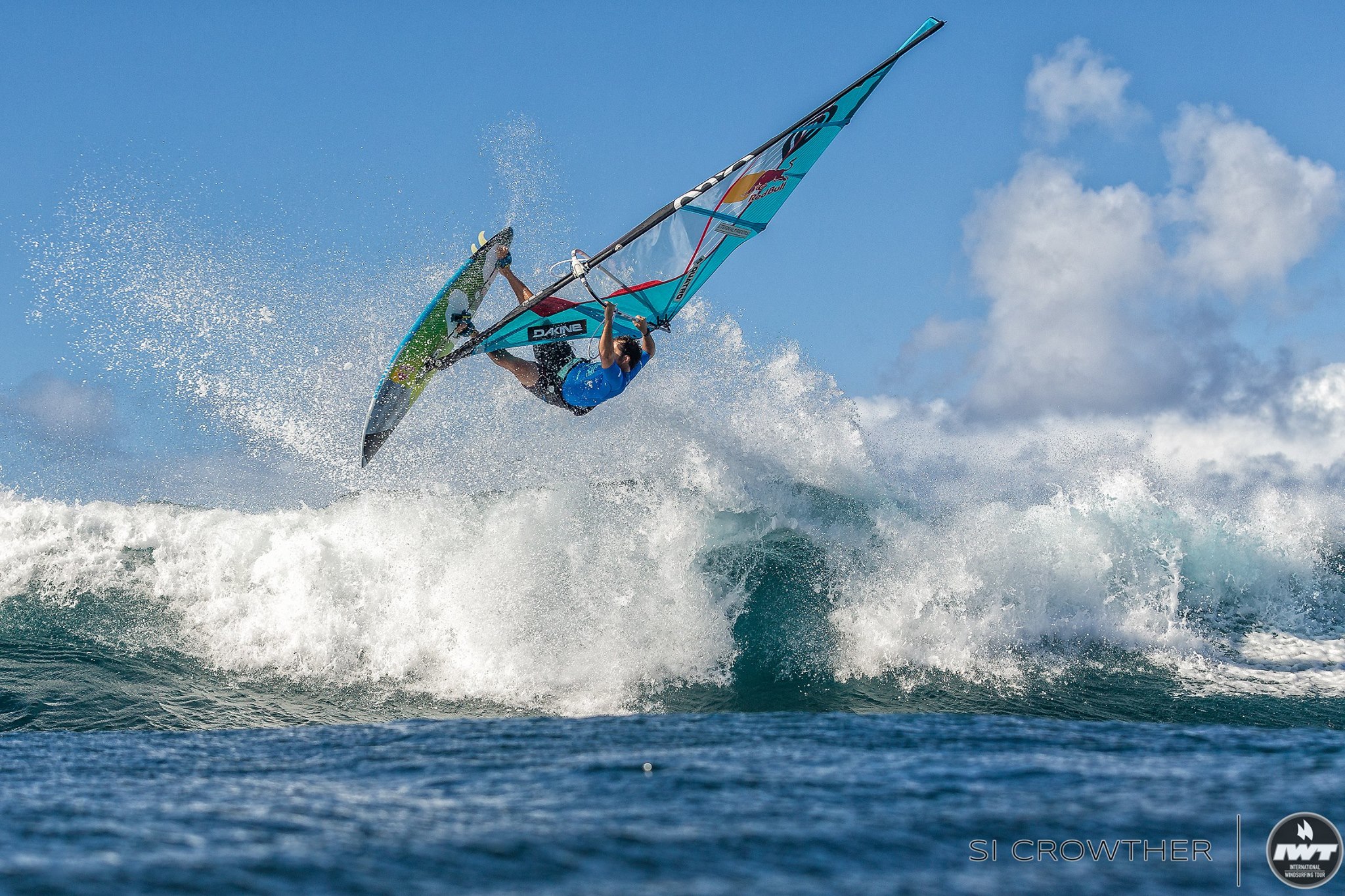