Waiting And The Winners Interviewed 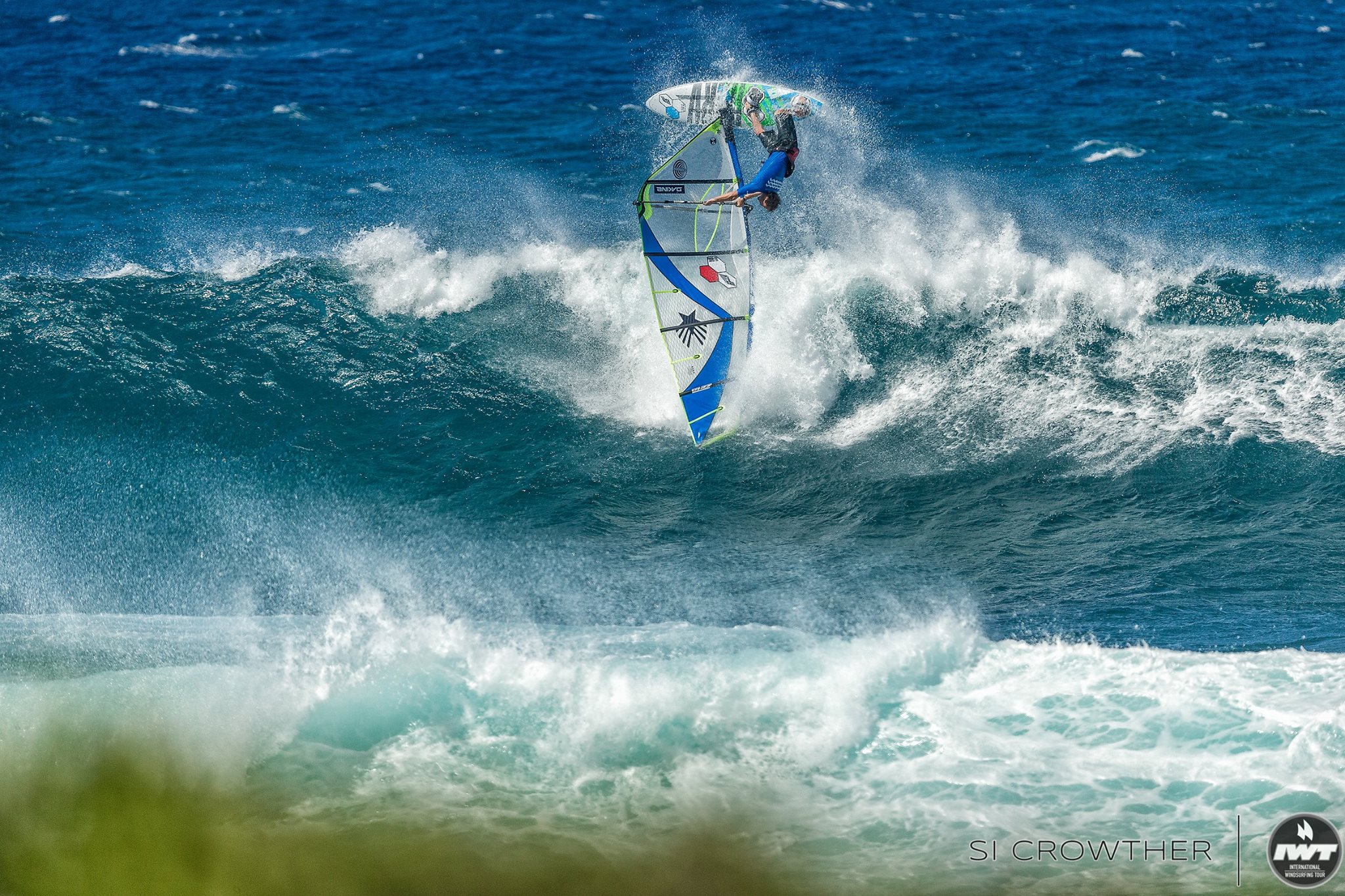 With just the final few rounds of the Pro Men and Women to complete and an epic forecast on the horizon here in Maui, the call was made for a lay day today, giving the riders a well earned rest and us the chance to catch up with Head Judge Duncan Coombs and all the winners from yesterday.

The IWT is a truly international tour, and whilst many of the riders are now living on Maui, we are honored to have so many riders from around the world travelling to compete with us and really sending it to the locals! 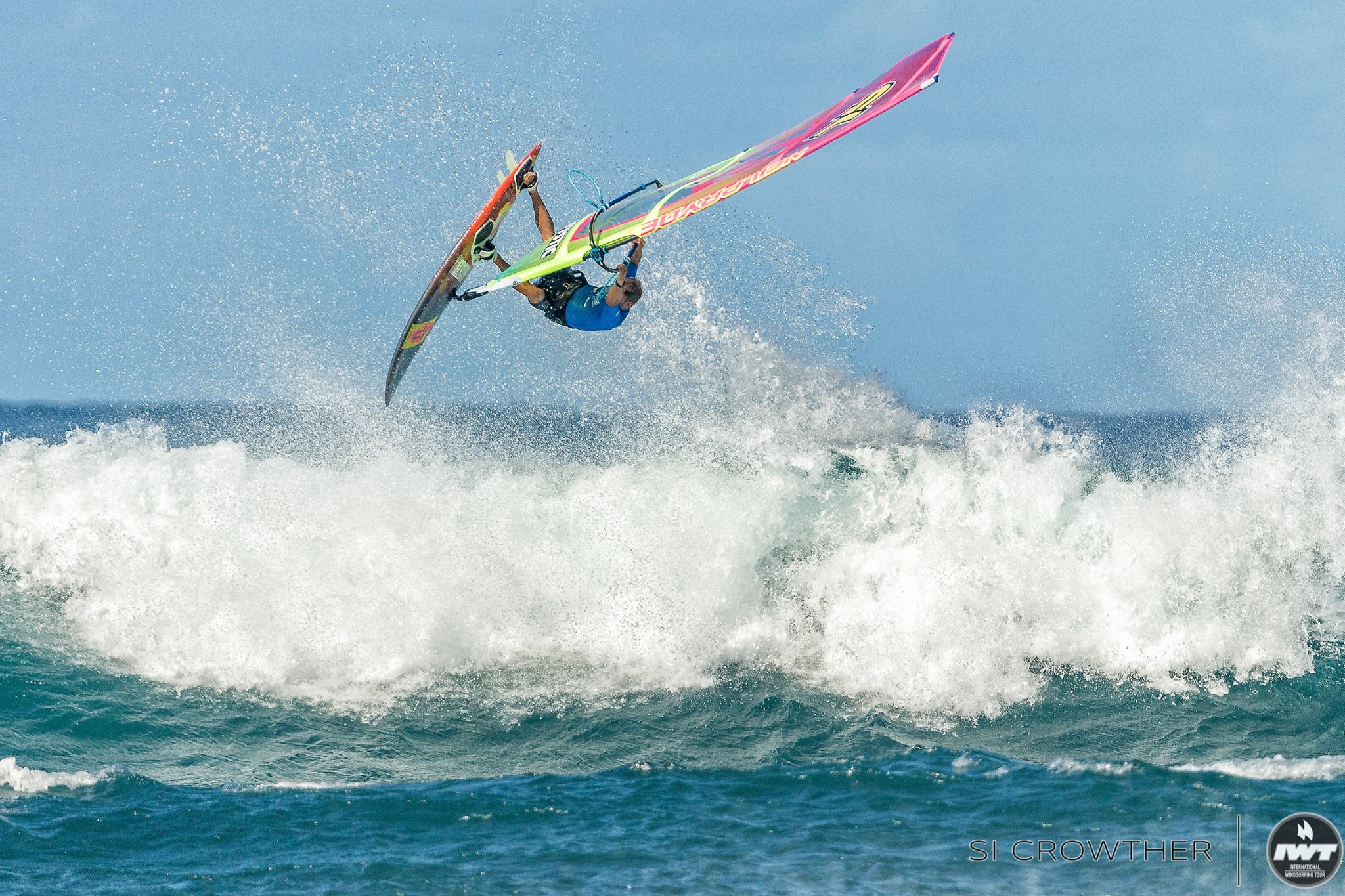 “Stand out riders in the Pro Men division were Bernd Roediger, Levi Siver, Robby Swift and Antoine Martin; these riders notched up goiters, 360s and big aerials, giving them the highest scores of the day. Morgan Noireaux was up there too, just with his full rail turns. I am looking forward to seeing more from him and KP (Kevin Pritchard). Boujmaa Guilloul sailed well in the first heat too; there’s so many excellent riders at this stage it’s tough to call the best riders! Big shout out to Federico Morisio, he had a really tough heat and sailed really, really well; he was totally ripping. 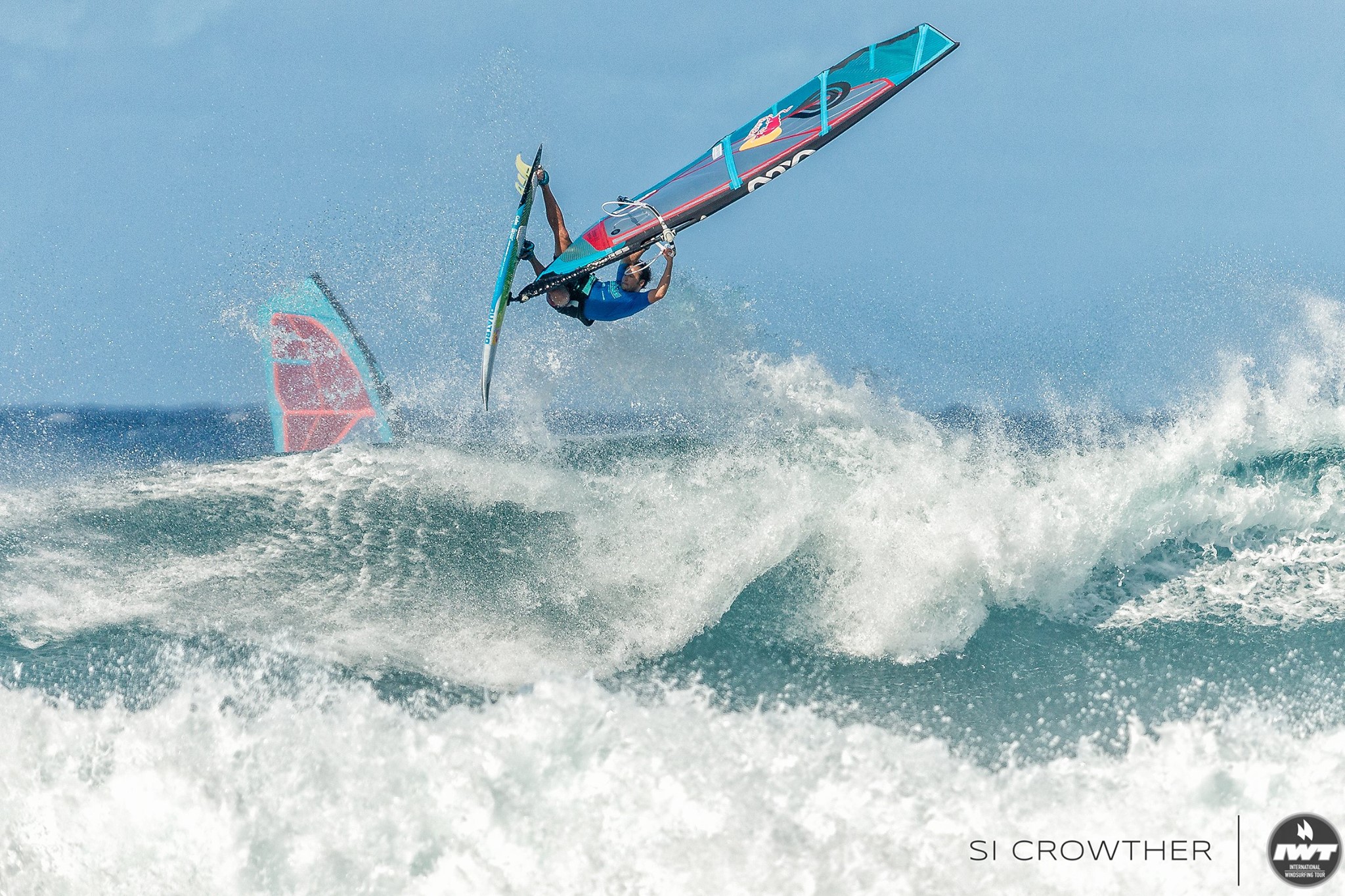 “In the Pro Womens fleet for me, Sarah Hauser and Fiona Wylde are the riders to watch. In the Amateurs I think the stand out rider was Yves Masnada. He didn’t win it, but it was a really close battle between him and Damien Girardin in the end. Masnada’s style and timing really stood out to me throughout the day.”

“In the Masters fleet it was Kai Katchadourian that took the win. He always looked comfortable. He took the win with his last wave and just connected a few more turns than Pascal Hardy. In the Grand Masters Greg Aguera looked on fire for the whole day, and has in fact been a standout for the whole contest; he started off well in the final with a fantastic wave, but he just couldn’t pick up a decent second one. Colin Baker showed great consistency and did exactly what he needed to in the final to secure the win, so massive congrats to Colin!” 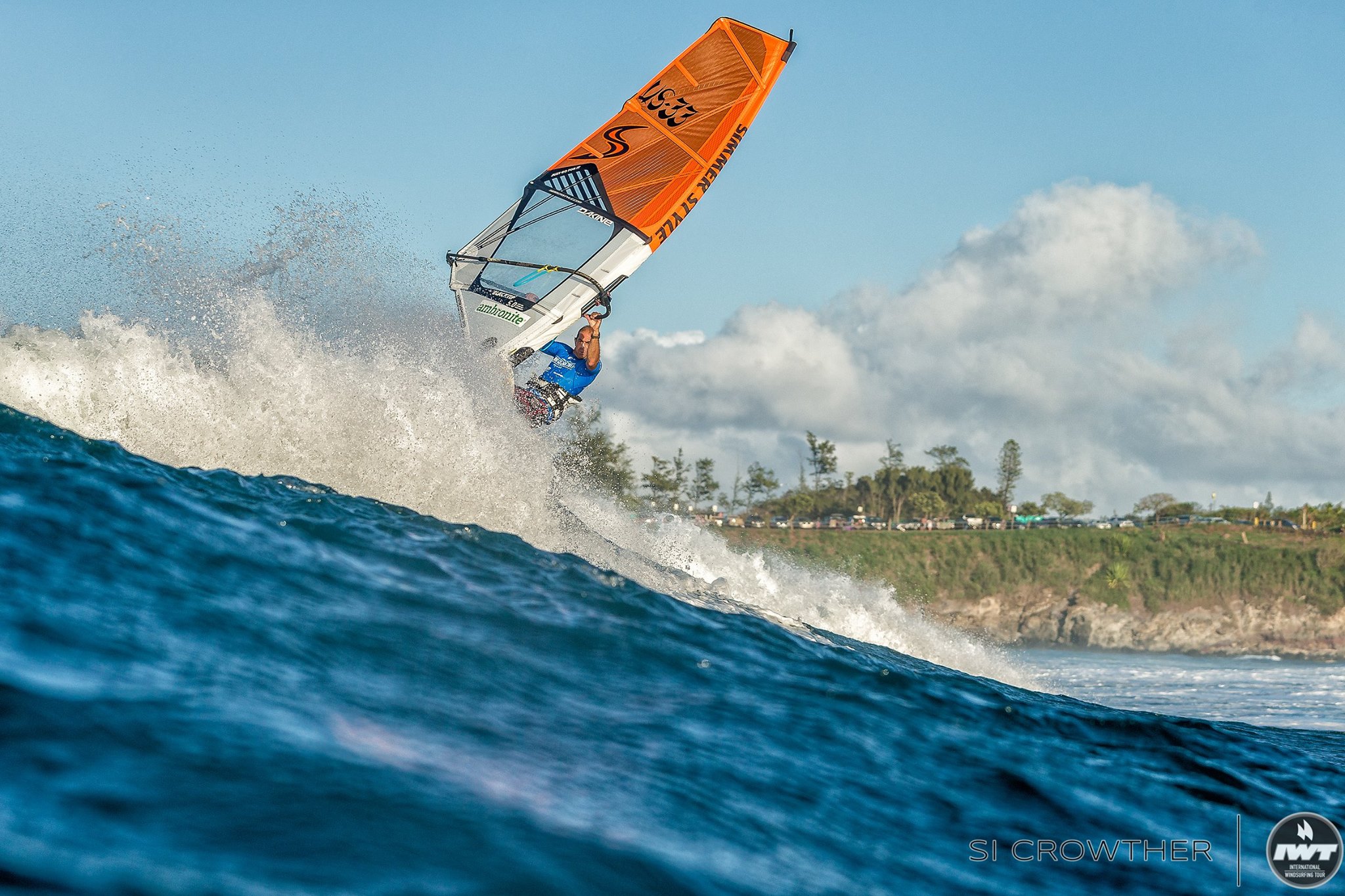 Kai Katchadourian – “What can you say about sailing Ho’okipa with just 4 guys out, both in the Pro division and the Masters final… it’s something you dream about! I’ve spent a lot of time thinking about getting to this point. I think I wanted to win the Masters division when I was 16 years old, to be honest.

“Honestly, it was a really tight final and I want to give full credit to Schweiger, Hardy and Aiken for putting up a huge battle, and it’s not over because I will be battling these guys for years! I’m the young master now and they’re going to make it hard on me; it wasn’t easy. I’m glad that the judges saw that I was doing some little turns to establish myself on that last wave. I wasn’t sure if I needed it but I thought it wouldn’t hurt, and I did. It was down to the wire!!!”

Colin Baker – “My day has been up and down. I had my Pro heat first and even though I thought I was going to beat Levi and Swifty, you know it didn’t go quite to plan haha! The wind direction changed slightly later in the day, so it got a little bit easier to ride. In the final my first wave felt like the better wave; I wanted to get upwind and try and control it a little bit, but other than that just ride the best waves I could. It was quite mellow really, not too rocky…at least for me, I think maybe Greg found the rocks at the end! But I had a lot of fun and it was great to be on the water.” 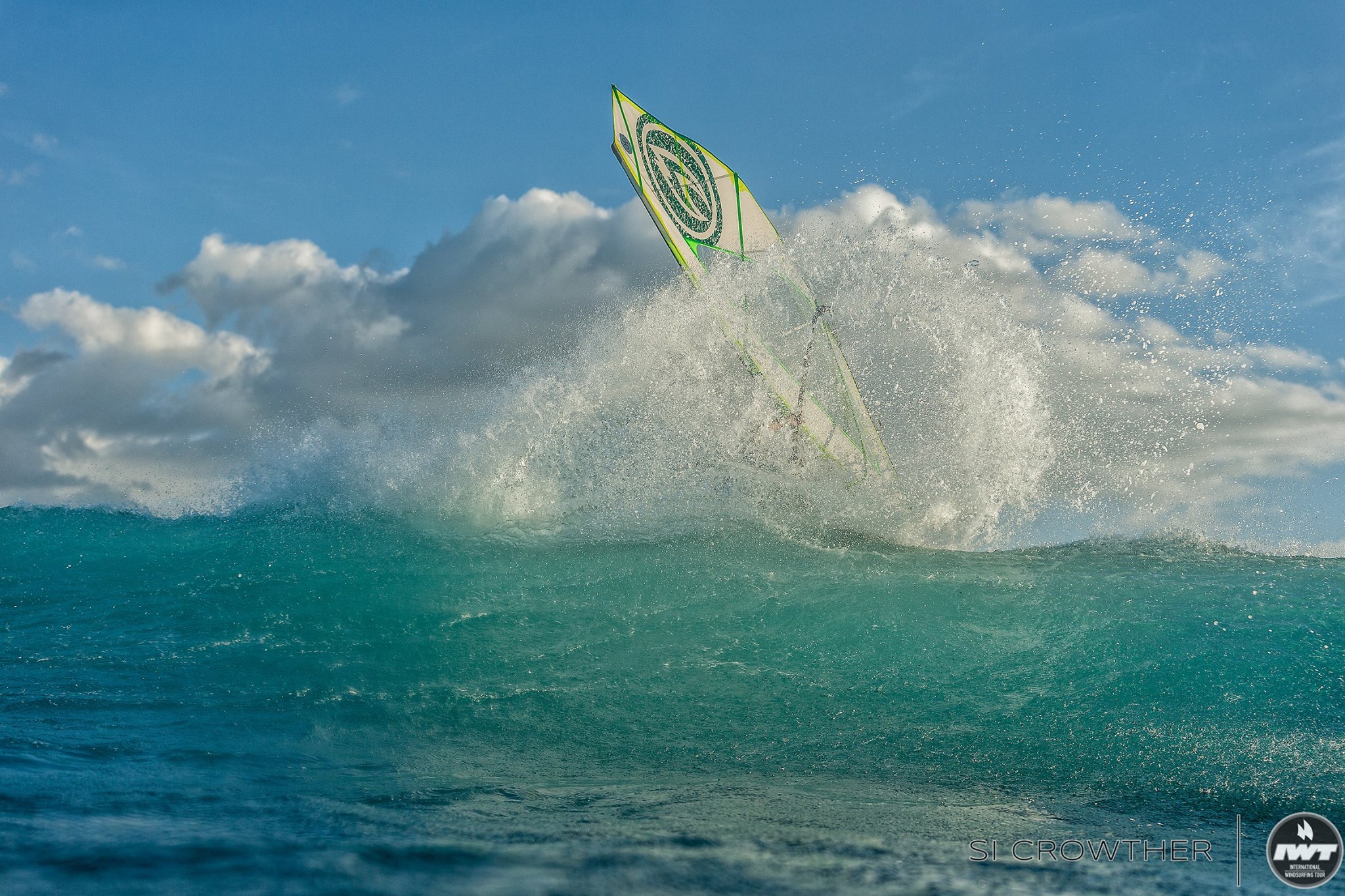 Damien Girardin – “It was a totally awesome day. I got out of work right on time and made it here like 5 minutes before my heat! I work for Naish, designing their kites, and live here with my family, so I don’t have that much time to windsurf anymore! I entered the contest to make me windsurf more and so I could get a bit more time on the water, especially in the contest as I thought it would be awesome to sail Ho’okipa with just 4 people out! Every heat that I got through I was so stoked, as it meant I would get some more time on the water. My body was totally wrecked by the end. My hands are torn and blistered, my body was cramping, and I couldn’t even swim anymore. 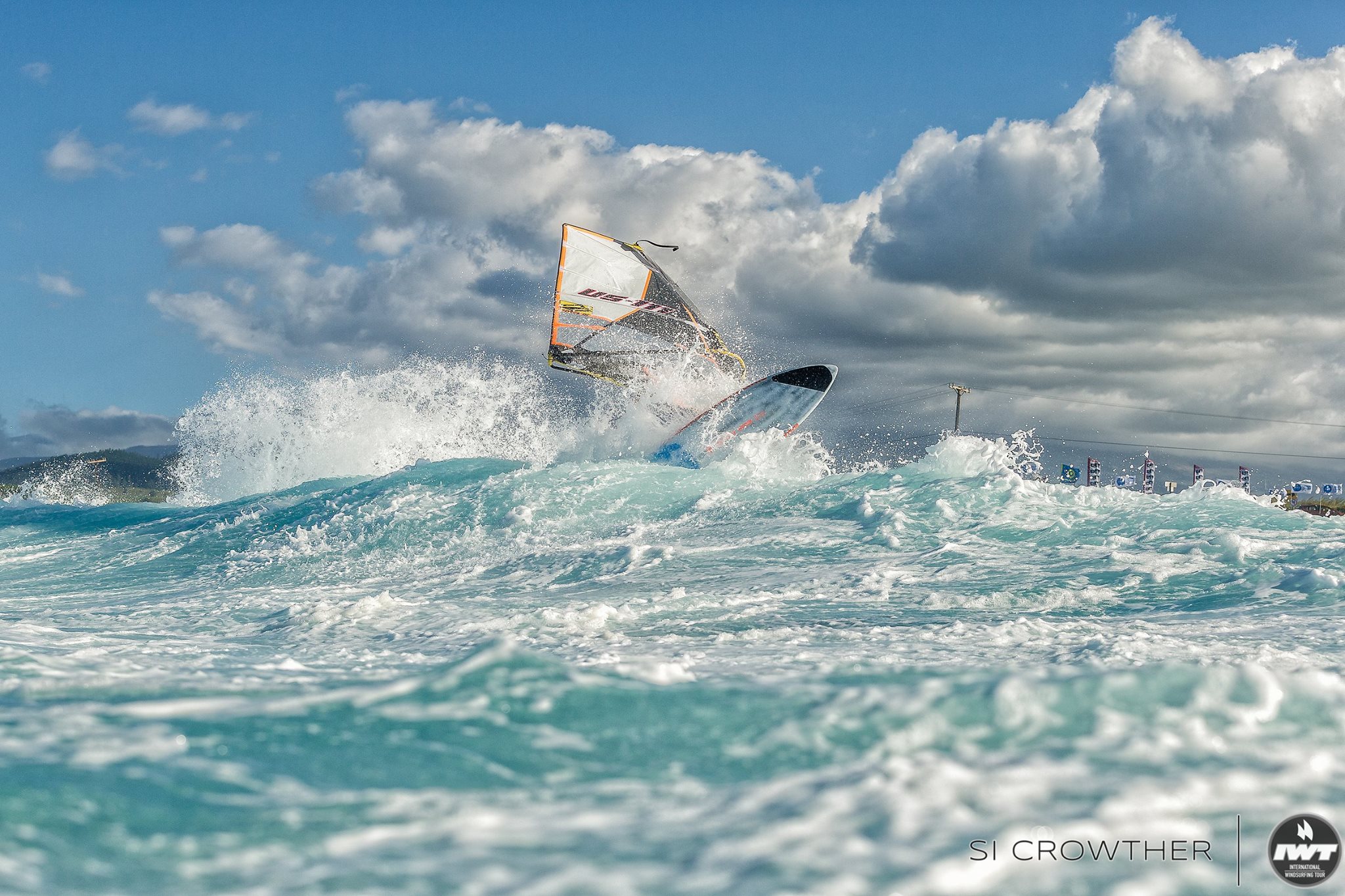 “The final was the most fun for me today. I got one good wave and then I got a big set, which I wish I had done more on, but I guess it was enough. I didn’t realise I was doing that well, I thought after my semi I was out. I went back in and was ready to de-rig, and then someone told me that I had made it through.

“I kitesurf so much now for work that there isn’t that much time for windsurfing, but I need to make more time for it. I think that windsurfing, in the waves, just has something magical, especially here. I don’t think a kiter can have as much fun as windsurfer at Ho’okipa, that I’m sure of. They can’t attack the lip the same way, there’s something about windsurfing here that I just love and I am stoked I got to enjoy it with just 3 other guys on the water today!”

Yves Masnada – “I had a lot of fun today, it was an amazing day for me, especially the semi final – there were some really big, beautiful waves and I am so happy to be able to come here for the event, it has been a pleasure. I come from Morocco and I came here just for the event, I competed in the IWT in Morocco as well, and will do next yeat too. It is hard as Moroccan guy to travel to more events, but it would do more if I could; it is such a great adventure to some here, it is just amazing!” 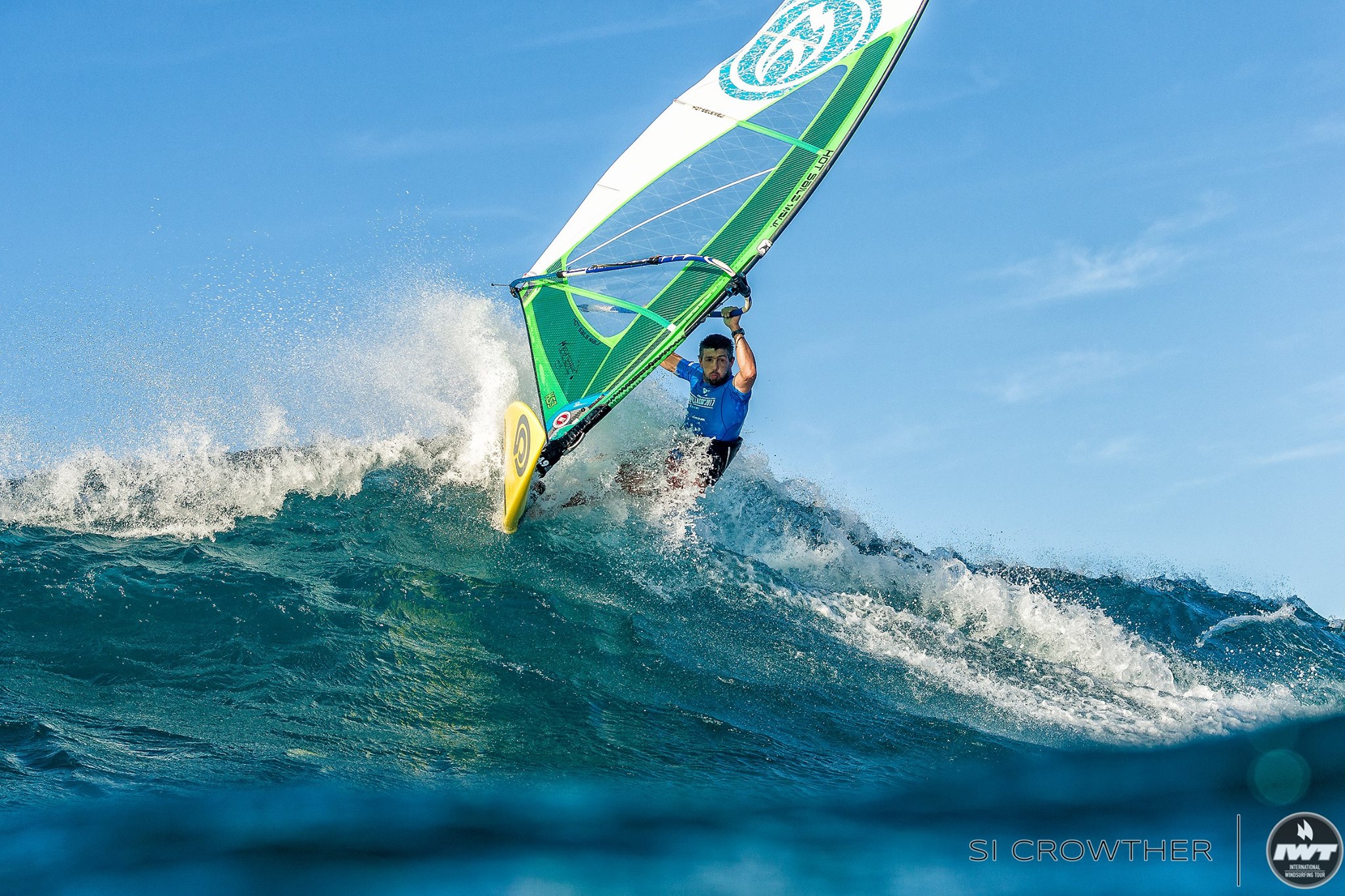 We now only have the Pro Men and Pro Women left to compete, these riders are released for the day. Further updates will be posted tomorrow, along with rider and judge interviews! 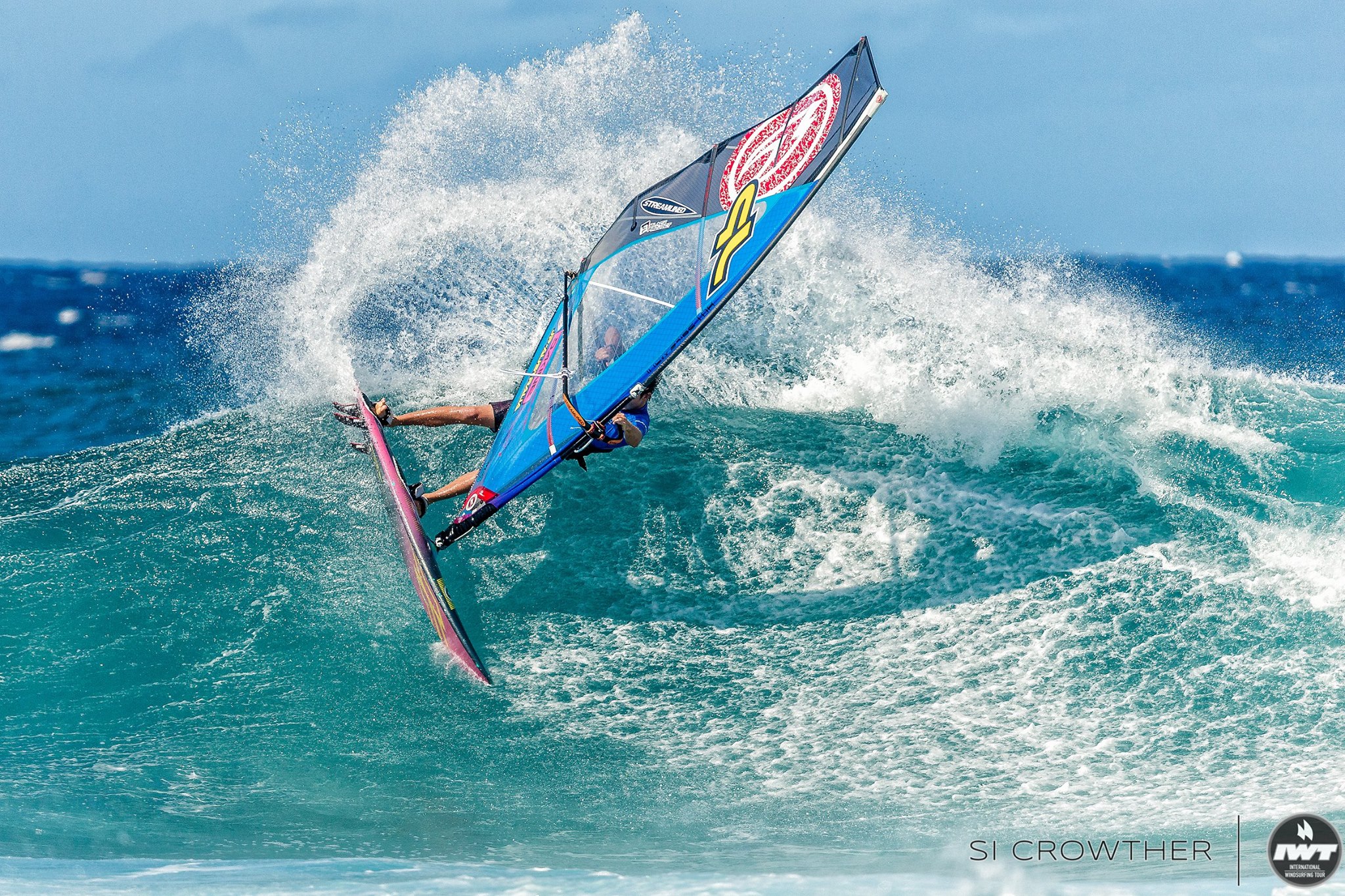