The remaining fleets hit the water for an action packed day in front of the SoloSports campo for Day 3 of the Baja Desert Showdown. The strong thermals continued to pulse through on Monday and coupled with the extreme low tides and dying swell, the call was made to continue the contest upwind in favor of better all around conditions. 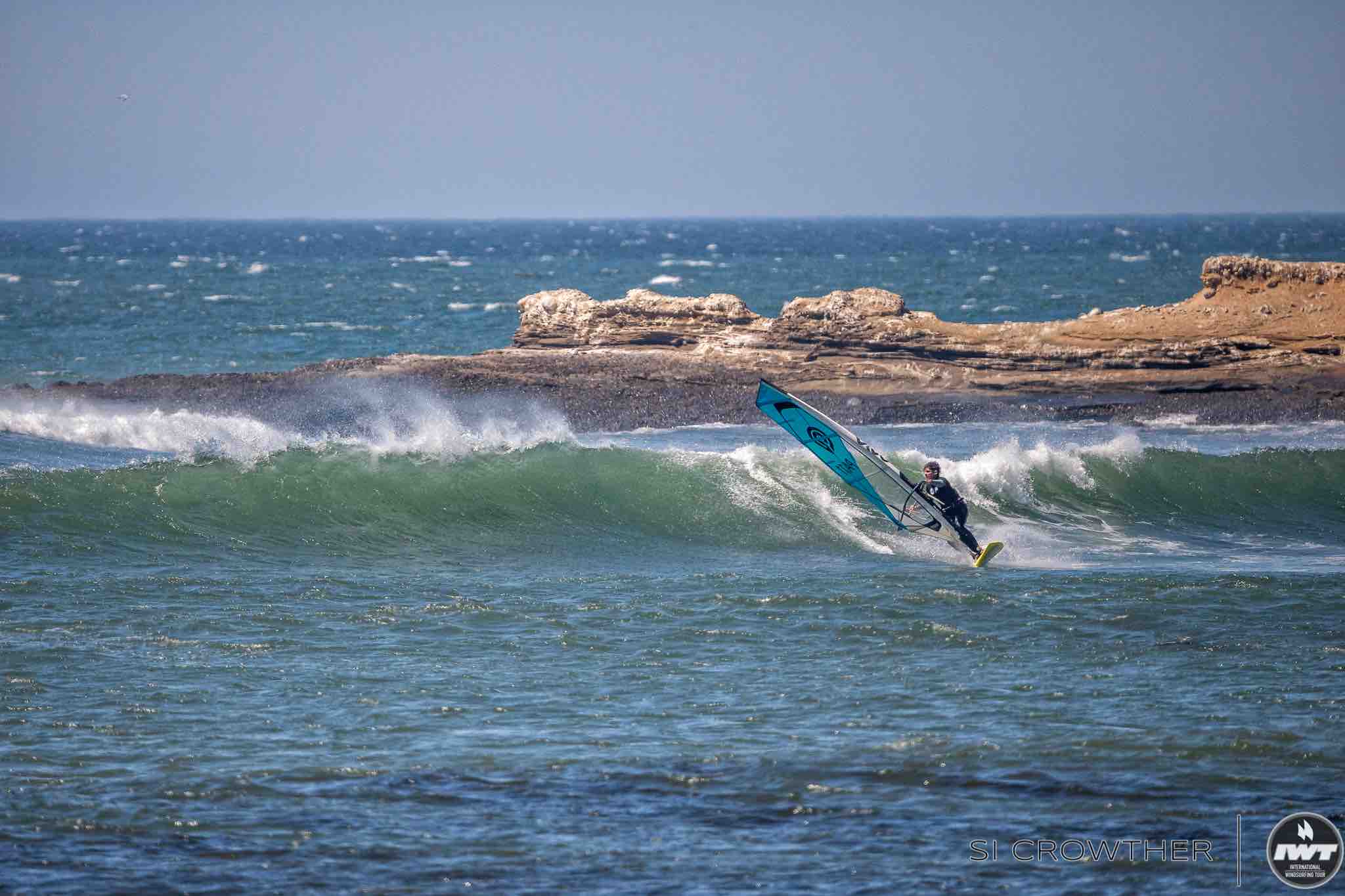 Fresh off watching the pros in action the Amateurs were ready to take to the water themselves for Round 1. By 10:00am Russ Faurot and Casey Hauser showed the crew it was plenty windy with a quick session before heats got underway at 10:40am. With riders on 5.0-4.2s and consistent waist to chest high waves coming through the Bombora up top and sometimes connecting through the main break, everyone was eager to get their first heats under their belts.

Kevin ‘K-Dough’ O’Connell got things underway with a big hit under a set at the Bombora, perfectly timing the difficult section to put up the first high numbers of the day. Tom Ben-Eliyahu linked together well-timed aggressive turns, utilizing the sections to make some of the longest waves of the heat. Alex McKirgan was showing vast improvements in riding with a new custom Quatro under his feet with sharp turns, and his experience at Old Man’s showed through his excellent wave selection to get him into the next round. 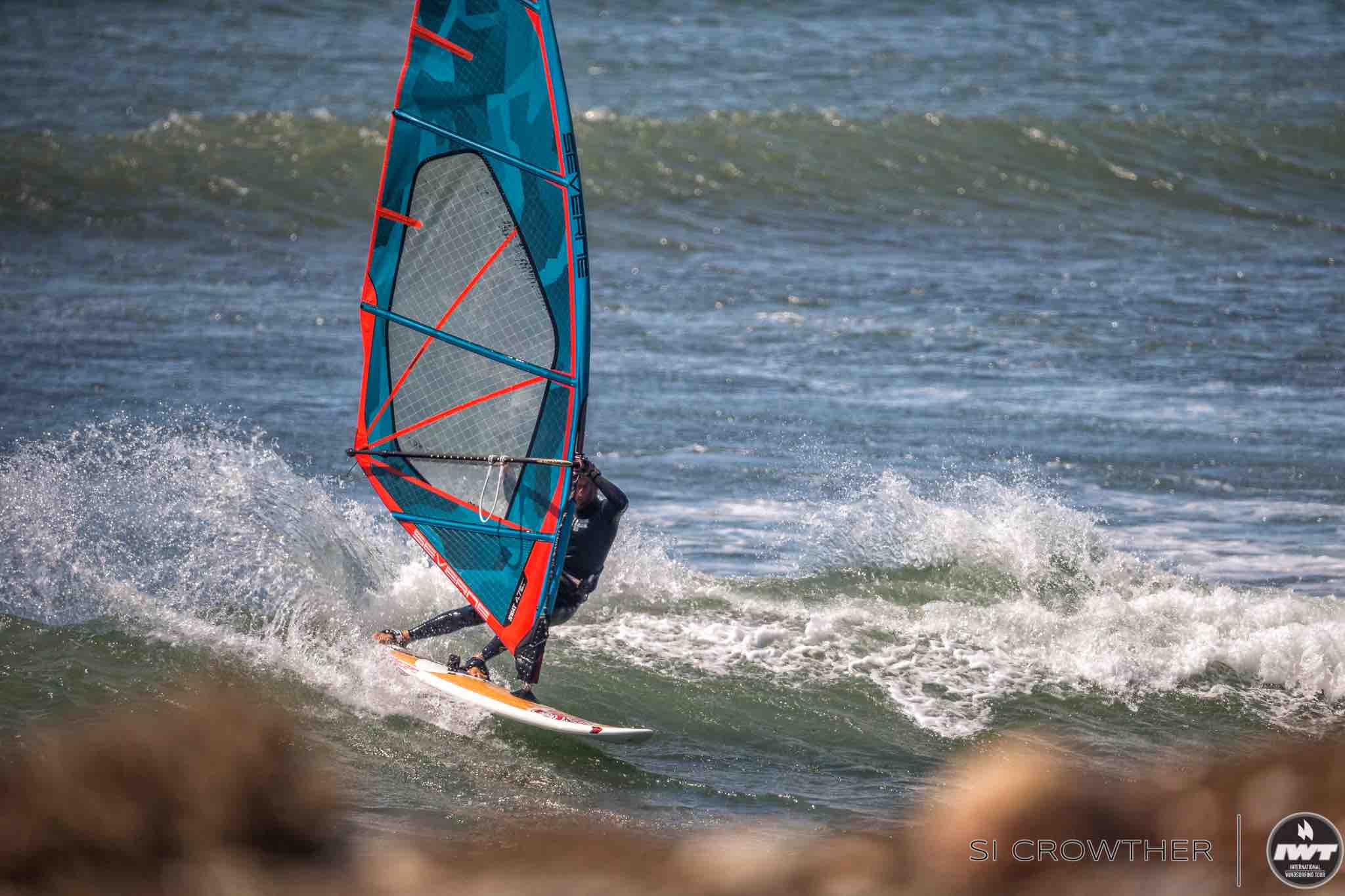 Other riders jumped on the playful conditions to push their skills and make a great show for the judges and onlookers at the camp. Finishing out Round 1 of the Amateurs Simeon Glasson found some of the bigger sets and lined up nice late turns under the section, as well as EB Bergmeyer from Maui who showed the comparatively ‘inviting’ Old Man’s sections no mercy as he threw some of the biggest sprays of the day. Jonathan Pooley moved his way through his heat with excellent waves right from the green flag till the end of the heat, and Tom Soltysiak put on a performance that left most wondering why he wasn’t in the pro division. 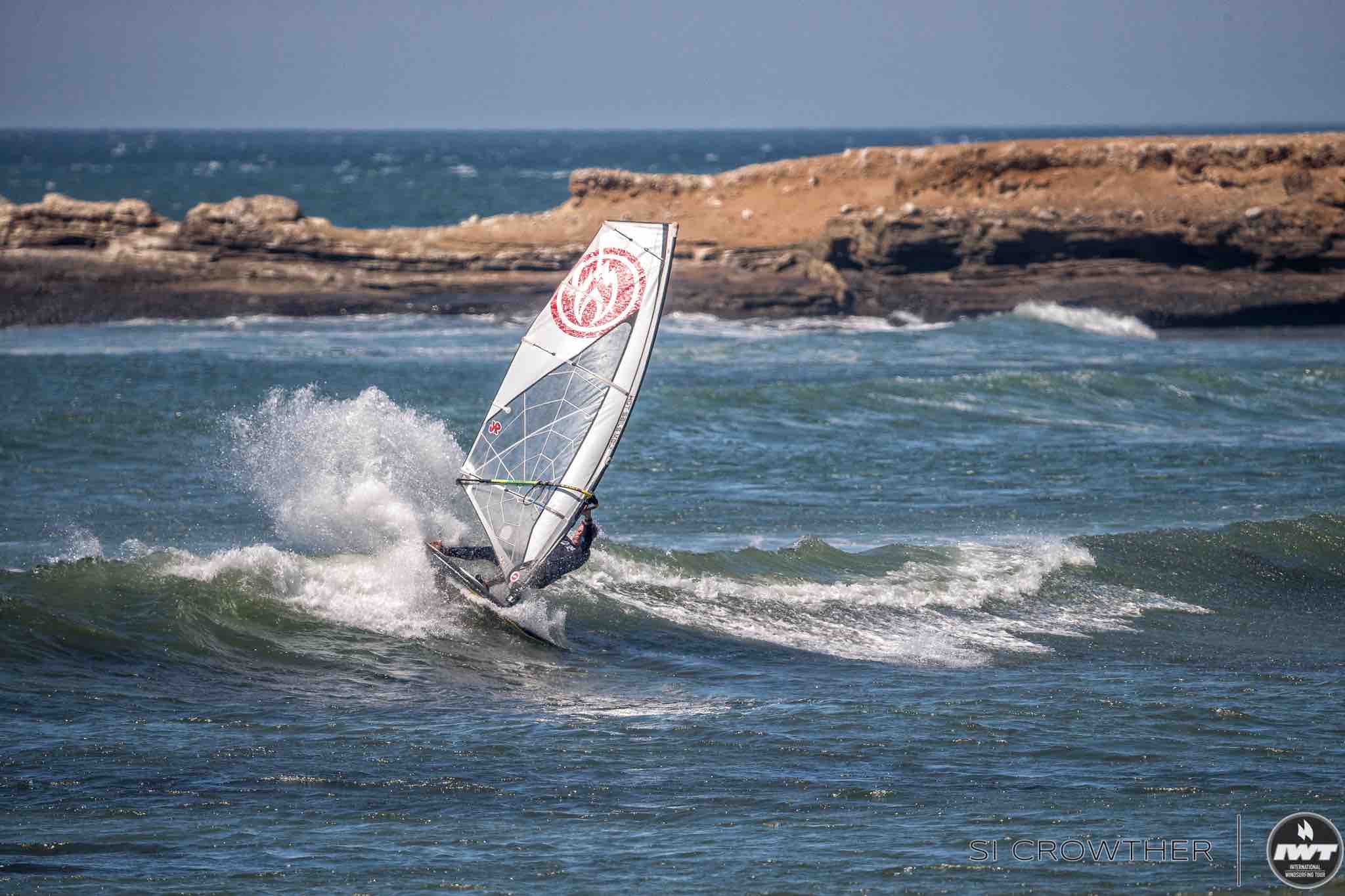 Working doubleduty on two divisions it was Jonathan Pooley setting the bar high for the Masters with an opening banger of a set wave at the Bombora with perfectly timed turns and hits under the sections to kick things off for the first heat of the masters. Ferdinando Loffreda, veteran to the IWT Pro and Masters division, worked with the waves he was dealt but unfortunately failed to find the right rhythm with the sets of the dying swell. Carl Speiss managed to click with the sets and showed tons of progression in his riding, connecting multiple waves from the Bombora all the way through the bay. On the other side of the masters’ draw it was EB Bergmeyer and Simeon Glasson who both stood out again, still able to find some good sets and with the increasing winds to put together some strong turns. 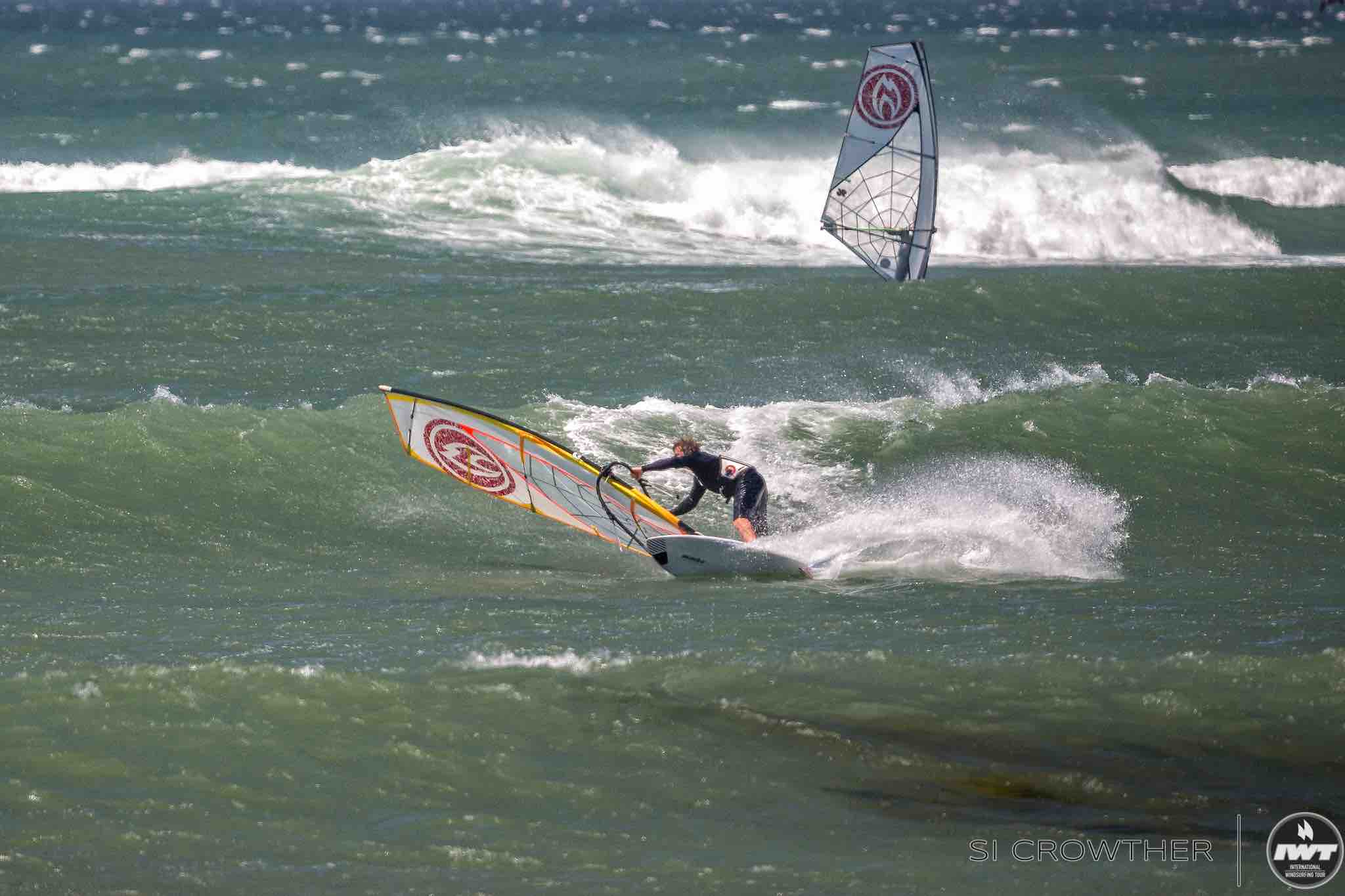 Our four grandmasters respectfully gave way to the 5 youth riders to hit the water first for the first heat of the youth division. Alex McKirgan faced off with Takara Ishi and a crew of Japanese grom rippers including Kazuiki Ishihara, Fuka Noguchi, and Kangu. Takara took first strike with an opening set wave with Alex on his heels on wave #2. The judges watched as both youths carved perfect lines through Old Man’s to each rack up decent starting scores. Right behind them on what seemed to be a never ending set the other three riders each got early scores on the board, and the heat continued to unfold in this energizer bunny fashion of kids catching wave after wave after wave. The judges had a hard time fitting all the wave scores into the sheets, and in the end it was Takara taking 1st in the 1st Youth heat with Alex McKirgan in close 2nd.

It was time for the Grand Masters to hit the water and finish out the end of round 1 of the remaining divisions. Colby Deer looked to find some bigger waves at the Bombora but was unable to link through to the inside sections. Mike Colee started the heat off with a great timed turn under the main section at the Bombora, followed by a couple more turns before connecting all the way through the inside, giving him the highest score of the heat. K-Dough was back in action with consistent riding, but in the end it was Scott Shoemaker with a buzzer beater wave to claim the #2 spot behind Colee.

The youths, un-phased by their first marathon of waves, charged back out for their second heat. Kazuki pushed hard, racking up tons of scores catching wave after wave, and Fuka milked every wave ridden for as much as it could deliver. Taka again had some of the best sets and was on a mission to finish one with a goiter but couldn’t connect back in front. Alex McKirgan got the upper hand with great wave selection and solid rides with good hits and a couple airs to walk away with 1st in the 2nd youth heat, setting up an epic finale for the youth division between Taka and Alex.

Moving into round 2 of the Masters, it was Rune Lovik who showed amazing progression, building his score-card wave after wave to take 1st spot in the heat. Behind him was Simeon Glasson, who after knocking out one of his fins and coming in for a quick change, immediately picked off the best wave of the heat, but was unable to back it up. 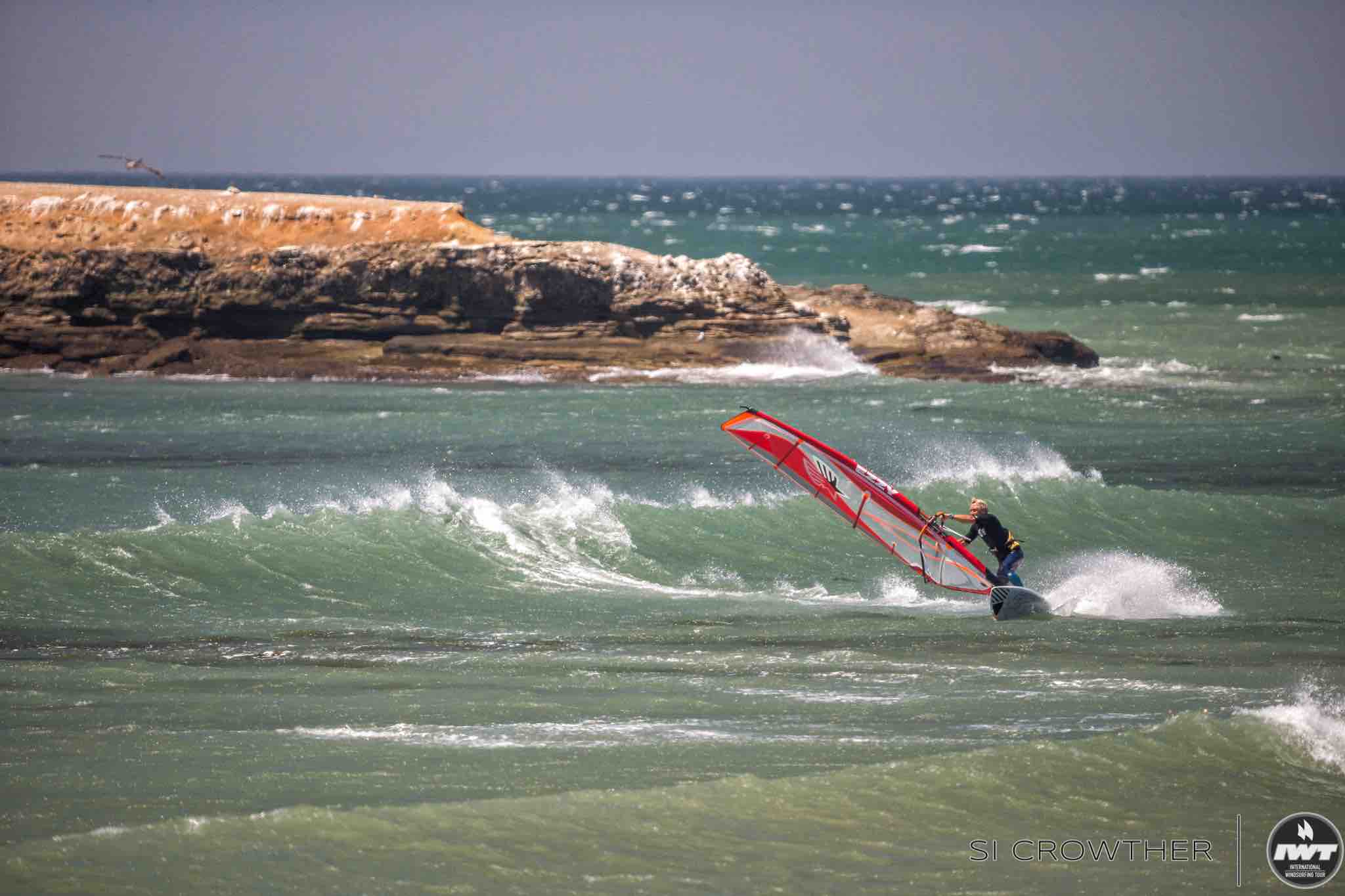 With low tide approaching at 3pm, the call was made for a 2-hour hold as the waves decided to take a break. At 5pm as the initial tide push started to roll in and the call was made to kick things off with the 5th and 6th Amateur heats, but unfortunately the conditions called for a cancellation of both as the waves seemed to still be a bit late to the party.

Text by Casey Hauser, and photos by Si Crowther 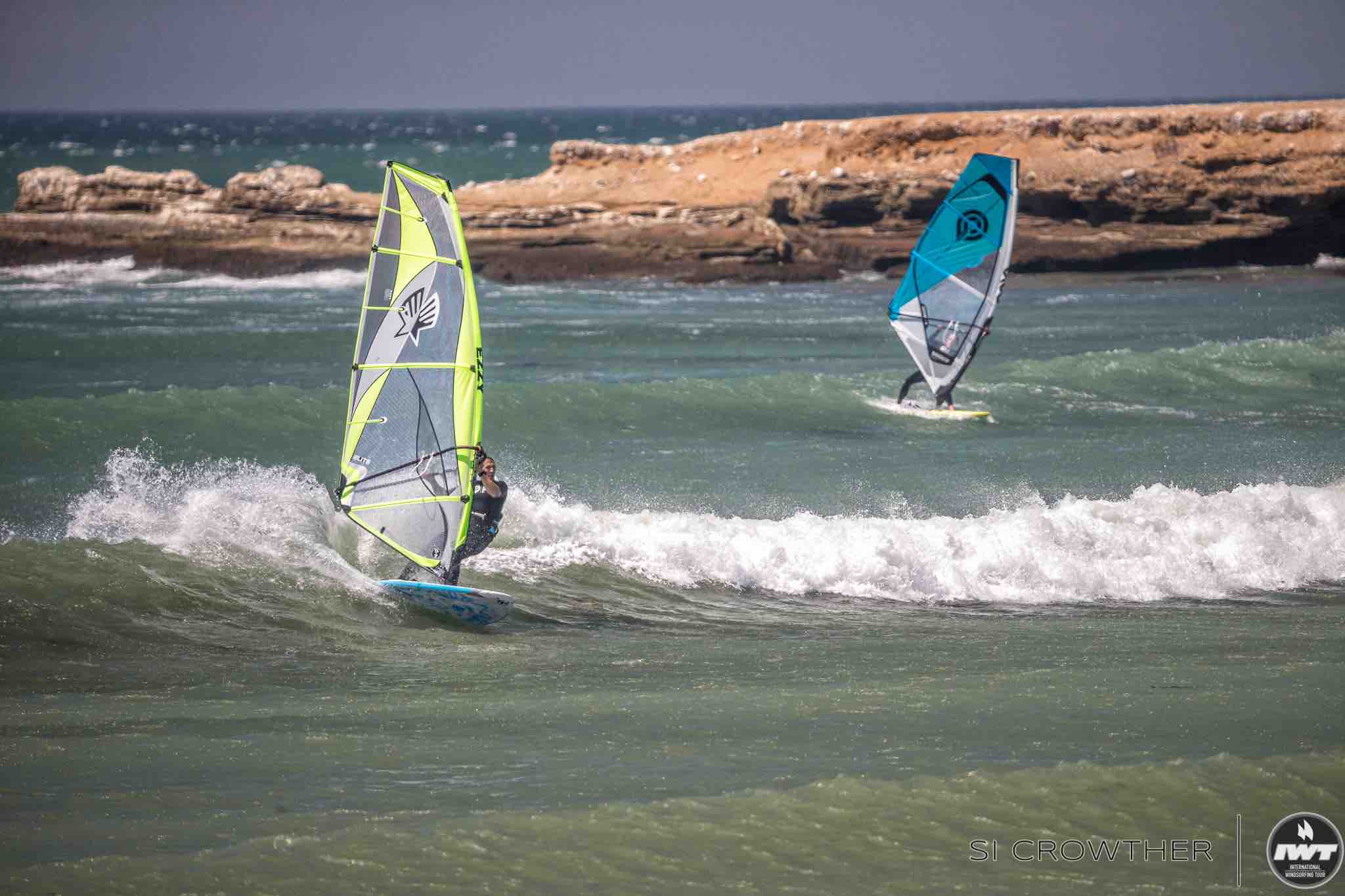