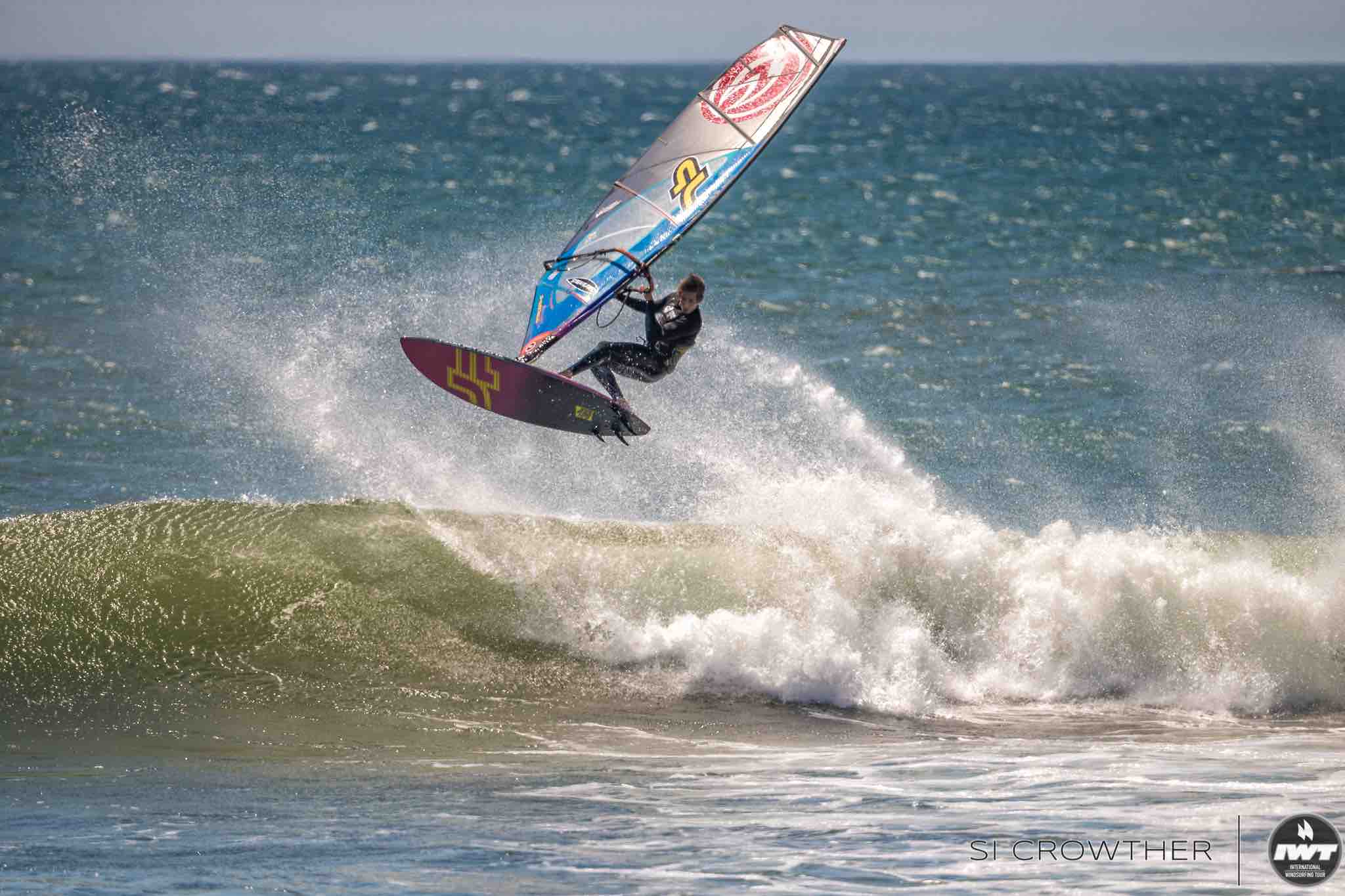 The waves are still rolling through at San Carlos and the contest gets underway at the Punta with Women’s repechage heat to decide the last 2 spots in the semi finals. Kazuki Ishihara opens with a smooth ride down the line, Hiroshi Hashimoto finds one to work the inside section. They both put scores on the sheet while Sam Bittner waited outside for a bigger wave. Sam’s patience is finally rewarded with a decent set wave to ride in to the bowl, but it was not enough to stop the two Japanese women advancing.

Next up is Men’s pro heat 7 with spectacular sailing from Edvan Souza throwing everything at the wave but not landing all his aerials and rotations. Russ Faurot was making accurate turns right in the pocket, plus a well timed back-door attack on a set wave at the point. Morgan Noireaux served up his reliable combination of wave-selection, power turns and multiple aerials to secure the second place, but it was Joey Sanchez who won the heat, hunting for set waves to connect with some full power late hits and a standout one-handed aerial.

Heat 8 opens with Boujmaa Guilloul riding a small wall at the Punta, but it’s enough for him to show his expressive turns and aerials. Federico Morisio was speeding down the race track to the Chili Bowl to find big aerial sections. Maxime Fevier had some great turns but struggled to find the set waves he needed. Not a problem for Kevin Pritchard who charged through the heat with his trademark smacks and aerials to take the win. 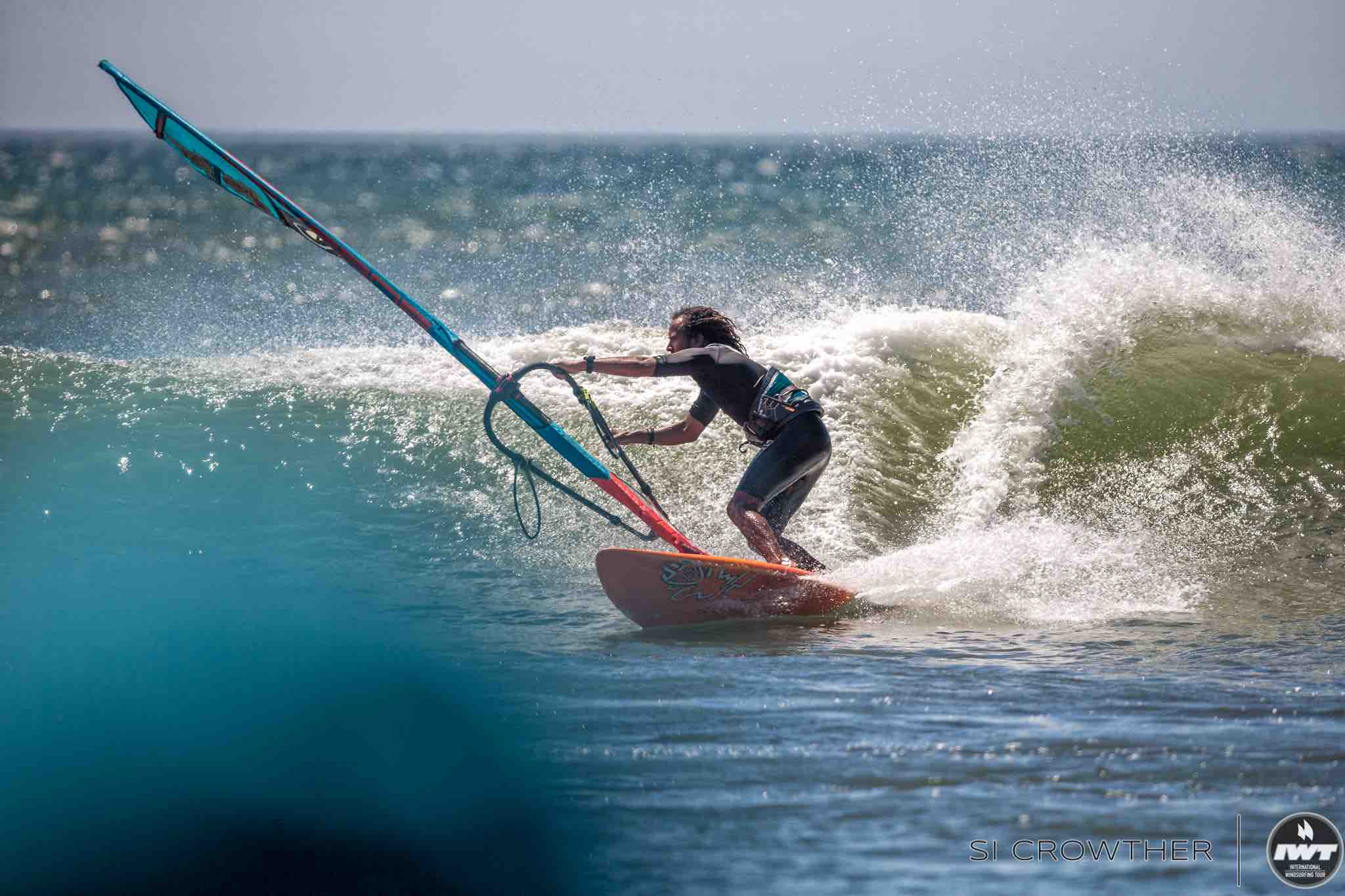 Heat 9 There are some long gaps between the sets now. Brice de la Menardiere finds a line and drops in deep at the Punta, riding smooth turns right in the pocket, not bad for a Baja first-timer! Francisco Goya was getting back in to the San Carlos groove, showing his expertise with great timing and hitting the lips much harder than yesterday. Kevin McGillivray knows this place so well, but still struggled to get on to the infrequent set waves to unleash his K-Smack hits. Casey Hauser found a nice one and got away with a spectacularly late hit at the point, chasing it all the way down to the bowl for more tight vertical turns. In the closing seconds of the heat Casey got creative on a small wave and entertained the judges with his boomerang, sail 360 and flawless bodydrag down the face. But it was Francisco’s heat, with newcomer Brice claiming second and a place in the Semi-Finals. 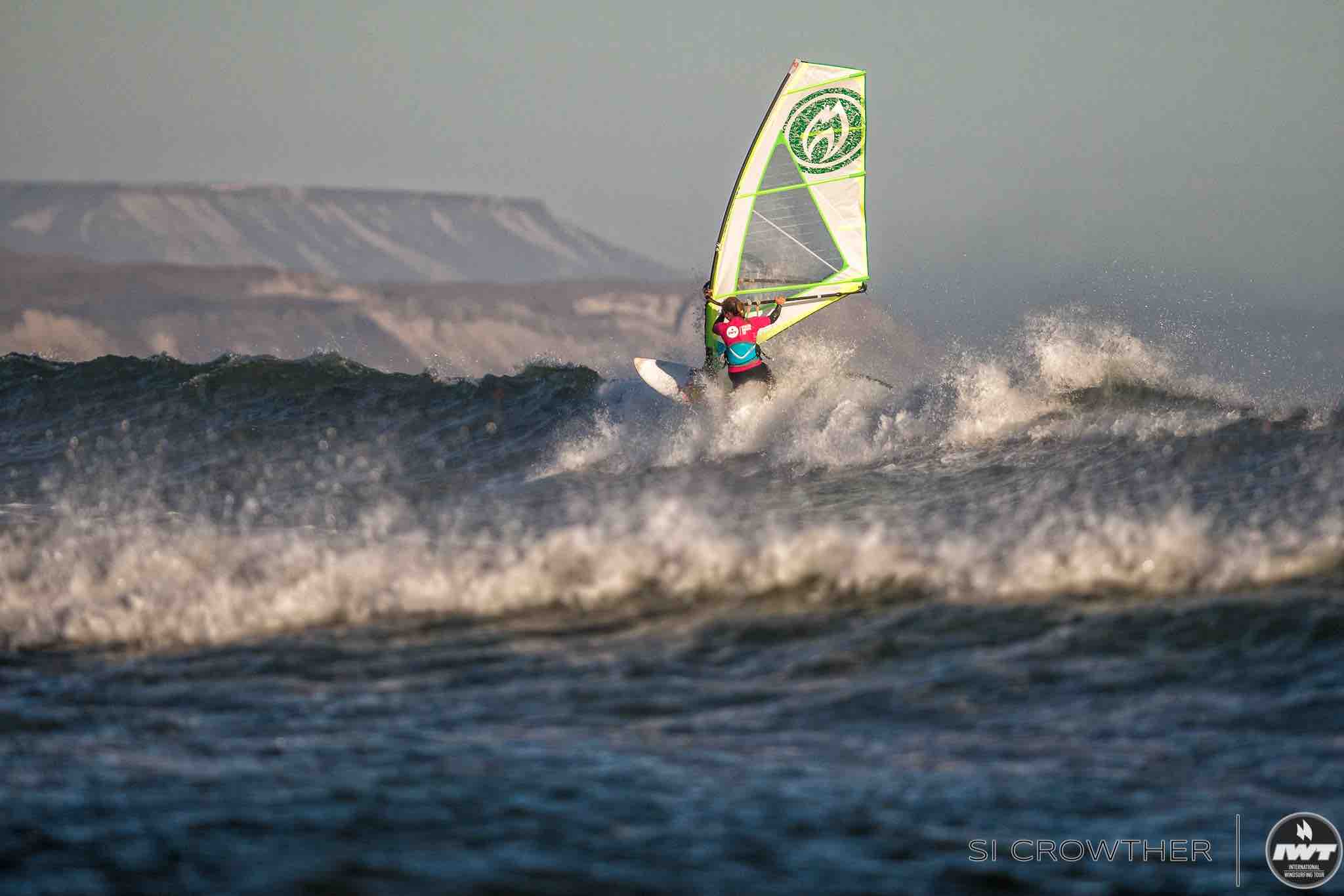 Women’s Heat 5
The first semi final kicks off with Arrianne Aukes finding a wave to work with and maximising the ride all the way with impressive top to bottom turns. Elise Gire jibed on to a wide peak and went speeding down the face to carve back in to the bowl section. Kazuki Ishihara selected her waves well and rode with smooth turns, while Annamaria Zollet showed a much more aggressive style, focussed on hitting the lip. It was Arrianne’s two solid waves that took the win, with Annamaria also progressing to the final.­

Women’s Heat 6
The second semi final heat included Sarah Hauser, Amandine Bouhour, Fuka Noguchi and Tomimo Noguchi. Sarah opened the scoring with 2 perfectly timed critical hits at the point to earn a near perfect score. Fuka followed with a nice wave of her own connecting long arcing turns down through the Chili Bowl. In the back half of the heat another nice set came through providing all riders with a good opportunity to show what they had. Again, Sarah Hauser showed that she was in control, picking the right wave and riding it with style and power. Amandine also chose a big set and rode well to advance with Sarah. 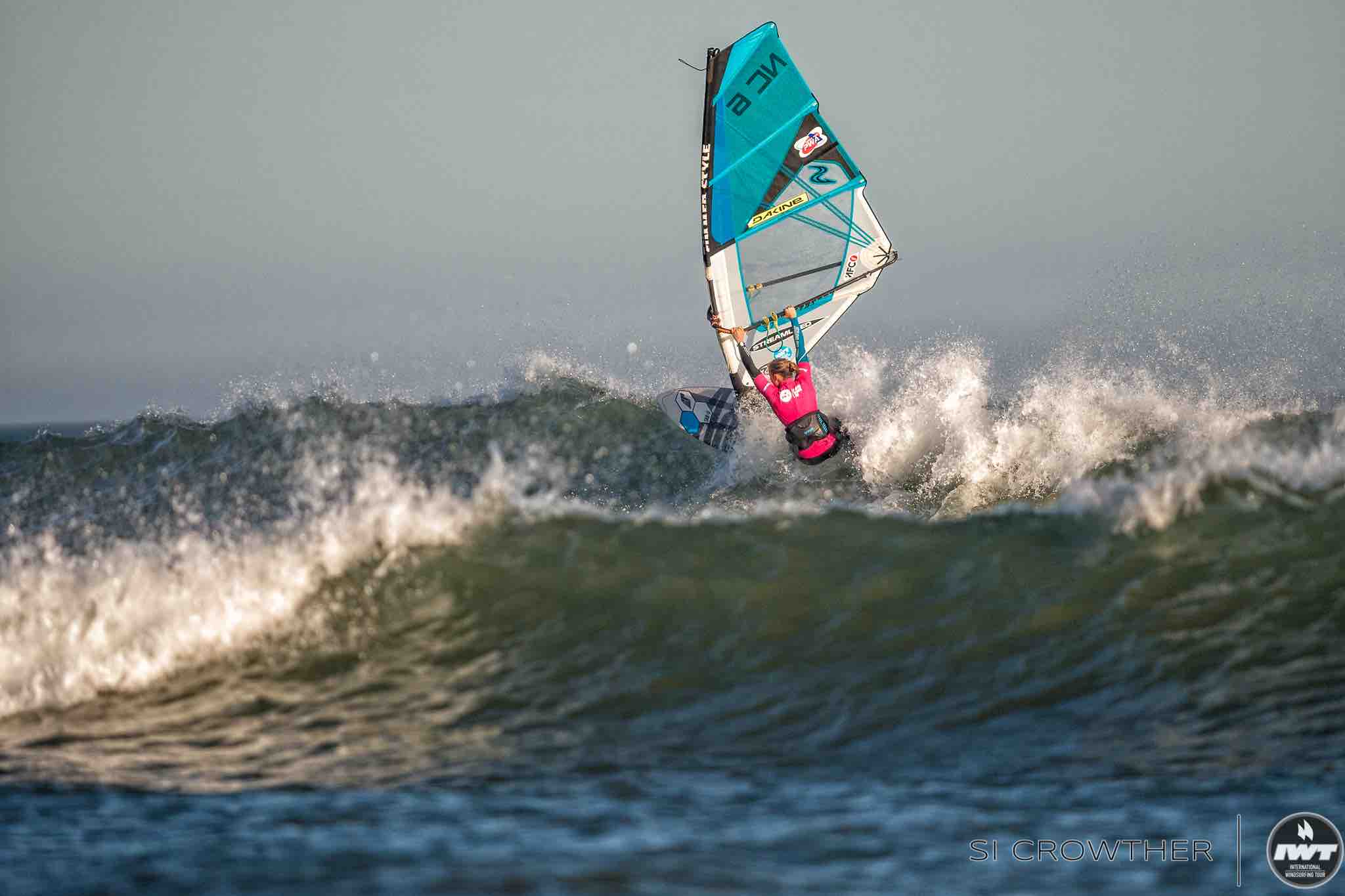 Moving back to the mens side of things, in the first semi final Boujmaa Guilloul Joey Sanchez and Francisco Goya squared off. Boujmaa opened the heat with a small wave that connected all the way from the point to the Chili Bowl. Despite the small size, the wave peeled down the line allowing him to mix in some solid turns and a couple aerials. Joey and Francisco were left hunting for waves out the back. The next set that came saw all riders with decent opportunities. Boujmaa again selected the best wave riding it through to the Chili Bowl. Francisco and Joey were in a battle for second, each finding solid waves. Francisco connected a few good turns, but Joey found a long runner and put up a big head dip aerial. Joey just ousted Francisco when he grabbed a late set wave and blasted a powerful turn off the point. 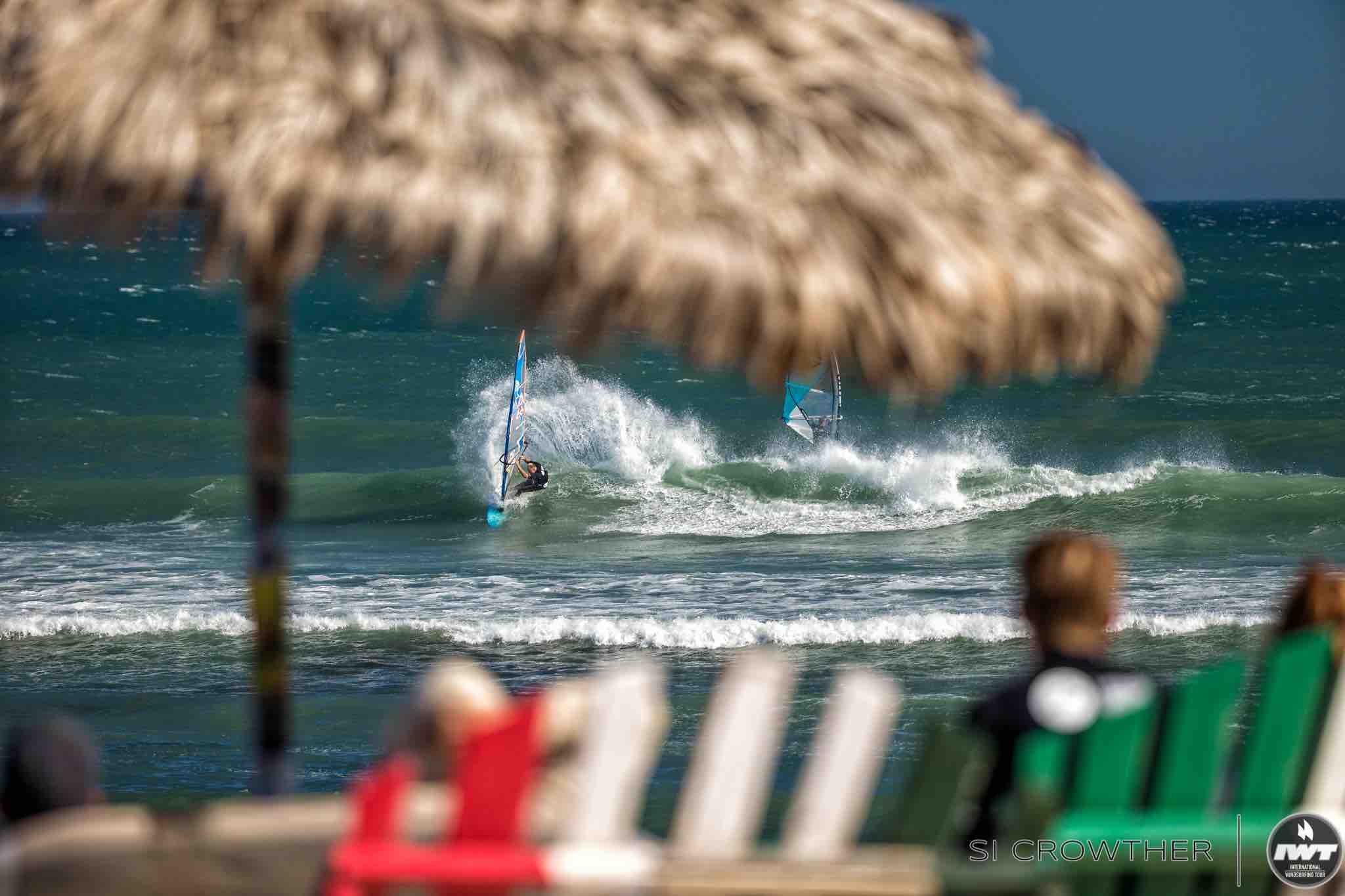 The second semi final matched Morgan Noireaux, Kevin Pritchard, and Brice de la Menardiere. With a dying swell, the call was made to move up to the SoloSports beach break. Waves were peaking up at the Bombora and connecting down to the beach below. Morgan and Kevin adjusted to the new location well picking solid set waves and cutting some solid turns. Kevin layed down some of his trademark power turns, while Morgan chose to go to maneuvers. Morgan connected one of the best waves of the day with a big air taka landed perfectly into a powerful carve. Brice sailed a solid heat with some good pocket turns and aerials, but couldn’t quite match Morgan or Kevin.

With sets becoming fewer and farther between, the call was made to extend the Final heats to a full 30 minutes. First up was the women. The ladies were met with a beautiful set to open things up. Anna Maria Zollet struck first grabbing the largest of the waves and timed her turns and hits perfectly. Sarah was right behind with another set wave locking in some critical turns. Arrianne Aukes rounded out the set with a high speed attack on the long beach break wave. The girls traded waves back and forth for the following few sets with each racking up big points. Amandine showed her experience finding some nice long lines and riding them with style. In the end it was Anna Maria who found the biggest waves and was able to place her board squarely in the lip to earn the top spot. Arrianne Aukes was right behind in second, while Sarah claimed the third postion. 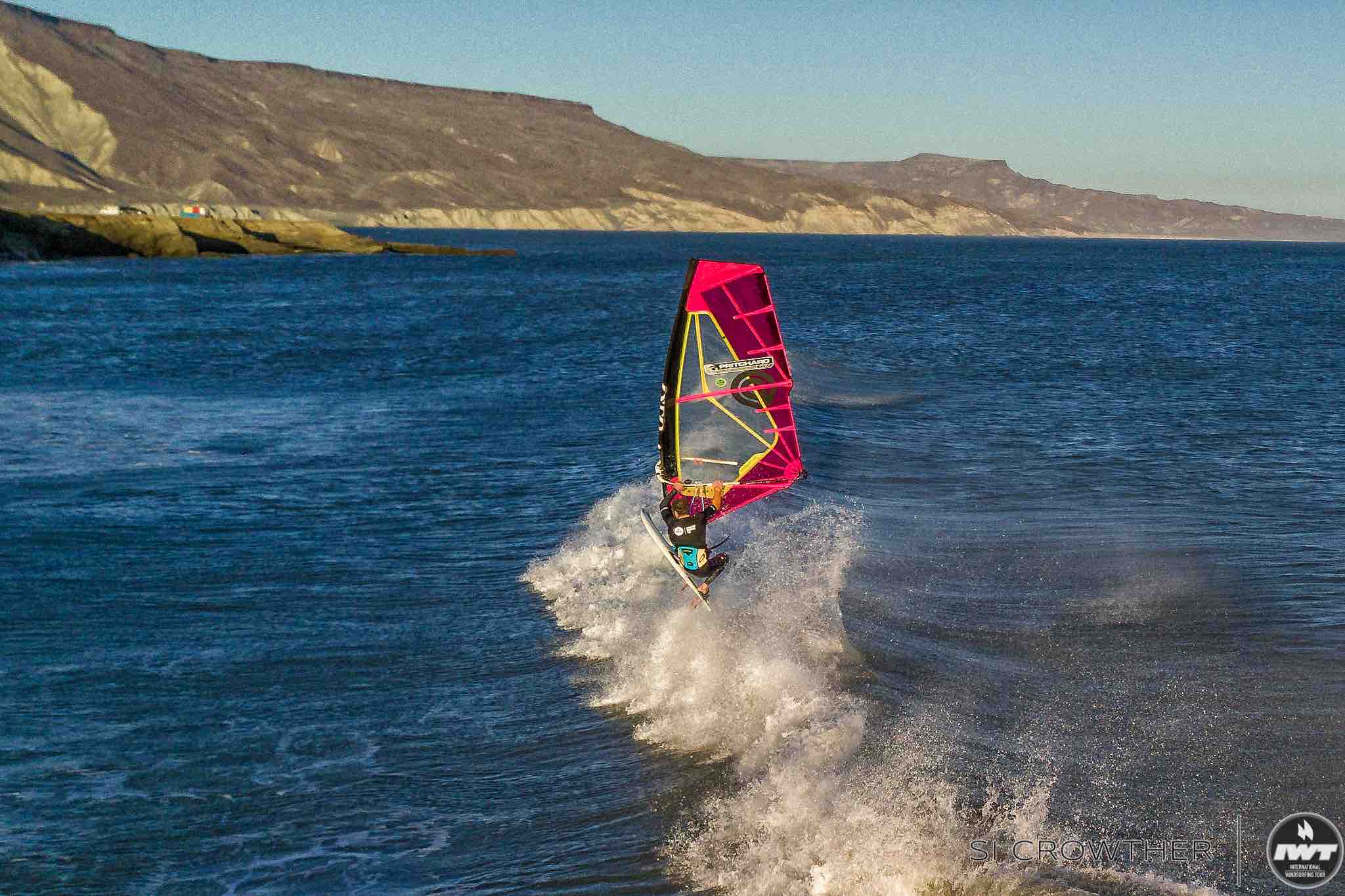 The mens final would be a test to find the biggest waves out at the Bombora, and try to link them through to the beach break. Boujmaa opened the scoring with a beautifully timed top turn, followed immediately with a powereful backside smack on the peak of the wave. Kevin was right behind with a couple big turns and then a race track to the inside where he carved through a big power turn to earn a solid score. Morgan and Joey were left searching for a while as the waves took a break. The second half of the heat saw a bit more action with each rider picking nice sets and riding them through. Joey was able to get some nice turns and a clean aerial on the inside. Morgan used the second half of the heat to build his score. A few critical turns and a smooth taka earned high marks on judges sheets. He pulled another clean taka right off the peak securing his second high score, and gaining just enough points to take the win. Kevin Pritchard found another outside set and place three strong turns out the back to vault himself ahead of Boujmaa to round out 2nd and 3rd place. Joey did well to claim 4th in this year’s Baja Desert Showdown. 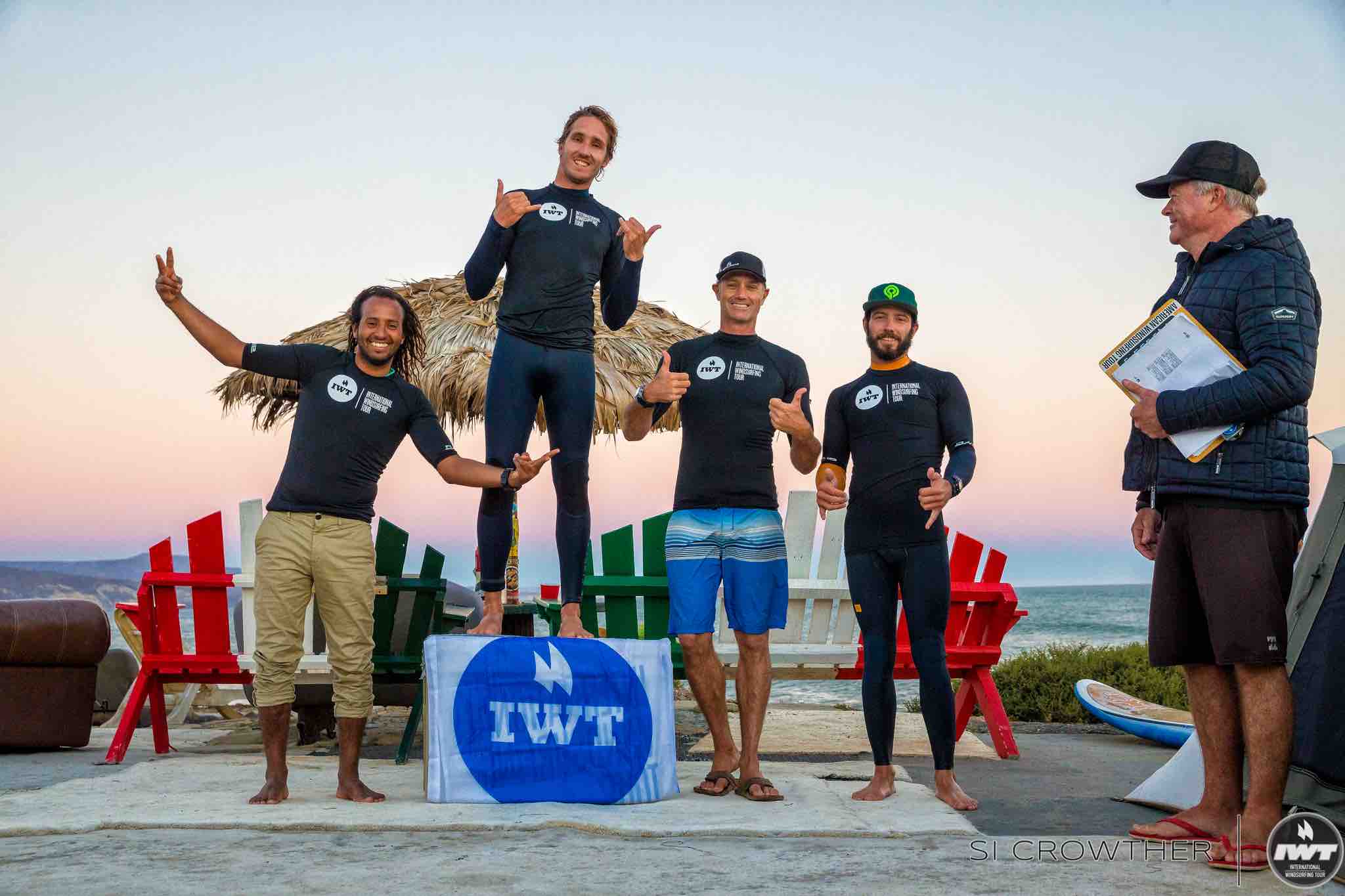 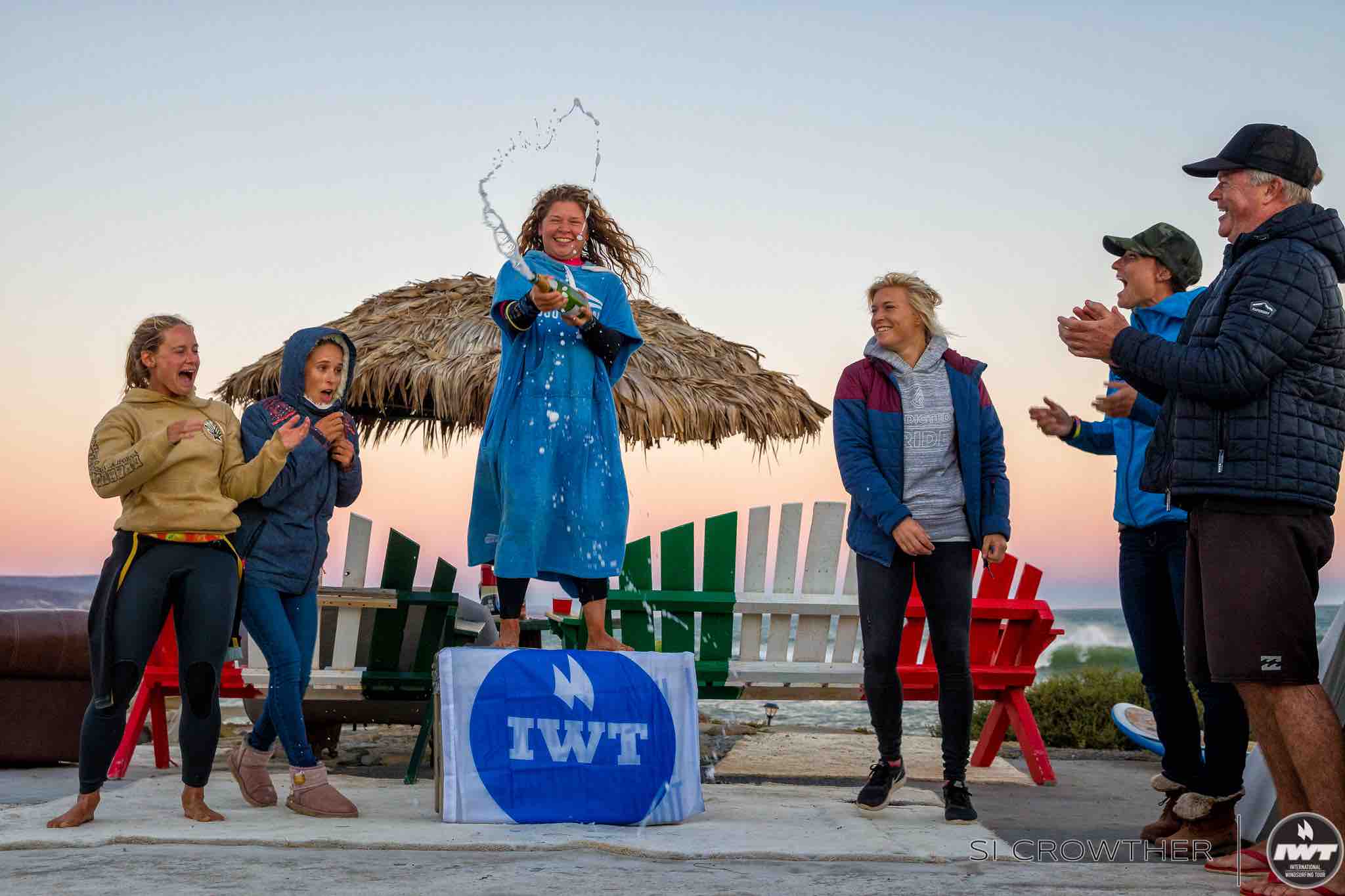