After two days of waiting, the wind showed up right in time for the peak of the swell. With mast plus sets rolling into the Point, riders were preparing early for what would turn out to be the most incredible day of port tack competition in AWT history. In Pacasmayo, we are lucky to have the choice of two world class locations, and it was decided that the waves in front of the resort provided the best canvas for the athletes to demonstrate their prowess. With white water mountains and a strong current, it was decided to extend the transition period to 3 minutes and run 18 minute heats. The new AWT scoring system was to be used for the first time which enables us now to review and analyze scores more effectively.

Today would be the day that the South American talent would clash head on with the traveling AWT contingent. There were certainly a few nervous riders heading out, with no one immune from possible early elimination. In the top half of the bracket Bernd Roediger and Kevin Pritchard remained cool winning their respective opening encounters to jump into Round #3. The competition exploded in Heat #3 when Hawaiian based rider Morgan Noireux came from behind the peak on his first turn and smacked the fattest section he could find before destroying the following sections and posting the biggest score of the day with an 8.9 and the highest total score of 16.767, the 19 year old Hawaiian based rider is yet to claim his first AWT Pro title and many are starting to think that this could be his event. Undeterred in the next heat Alex Vargas from Chile who probably sails Pacasmayo more than anyone else found the biggest waves and went deeper than anyone else dared, boosting air after air and causing a stir. Could he really take down current Tour leader Levi Siver? It was too close to call and both Alex and Levi were tied with 13.6 points, following a careful re-check of all the scores Levi advanced with the highest wave score of 7.233 over Alex’s 6.900. 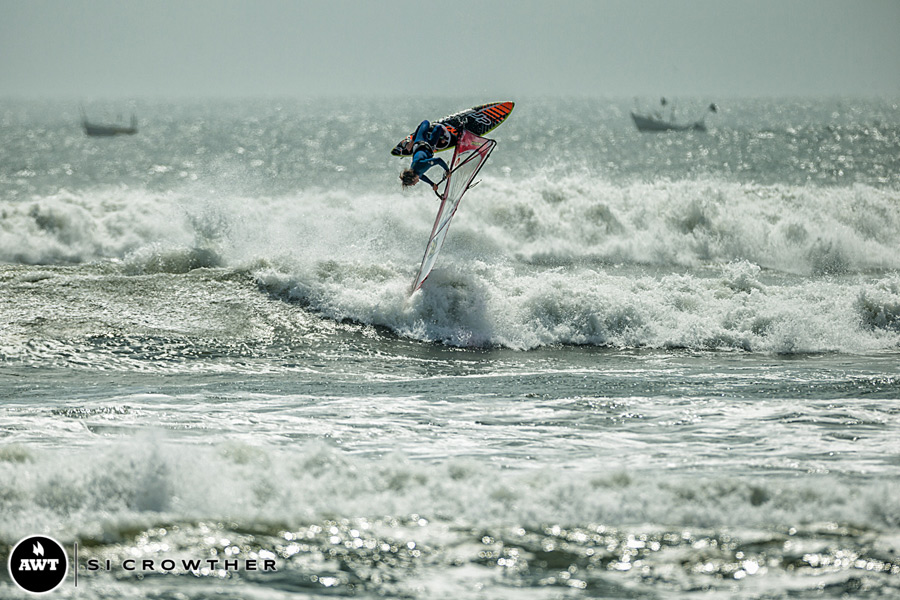 Round #2 featured the riders who finished 2nd and 3rd in their opening heats and would be the last chance for riders to progress. Christian Saurer (Brazil) stunned us last year with his aggressive and fluid riding. He knew that this was his moment. Like Alex he knows this place well, and put himself into the pit of the biggest and longest waves carving powerful turns and throwing big airs. He took down the rest, and advanced into Round #3 alongside Forest Ladkin (Australia) who has impressed with his fluid turns. After reviewing the heat scores and referring to the judging criteria, Alex Vargas was ready and linked his aerials and turns effectively to amass a solid total of 12.267 and book his place in the next round. Also advancing was Russ Faurot, who battled hard on his less than favored tack. 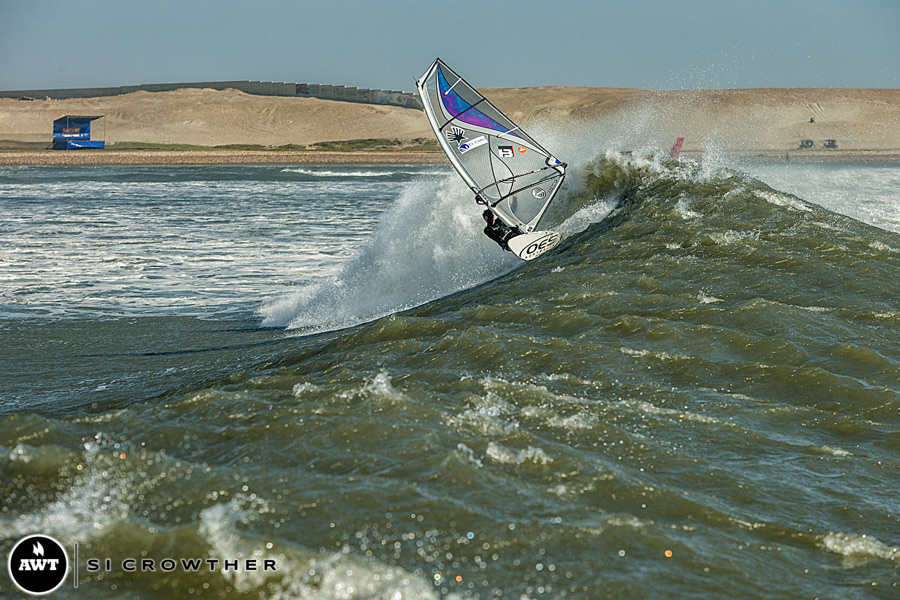 Round #3 (Quarter Finals) would see the first of two huge match ups with Bernd, Kevin, Christian & Forest all capable of going all the way. Incredibly close, the riders exchanged wave after wave, swapping the qualifying spots several times. In the end, it was the fluid style of Bernd Roediger, which would see him take the win with 11.600. The ultimate professional, Kevin Pritchard (11.233), pushed hard and needed all the experience he has built up over the years to fend of strong challenges from Forest (9.533) and Christian (11.067). The second of the quarter final match ups was a more one sided affair with Morgan booking his semi-final place with a consistent array of powerful tight turns in the critical sections. The goofy foot surfer arrived early in Peru, and that experience shows. Not to be outdone Levi racked up a high 13.000 score ending Alex Vargas’ and Russ Faurot’s dreams of glory. 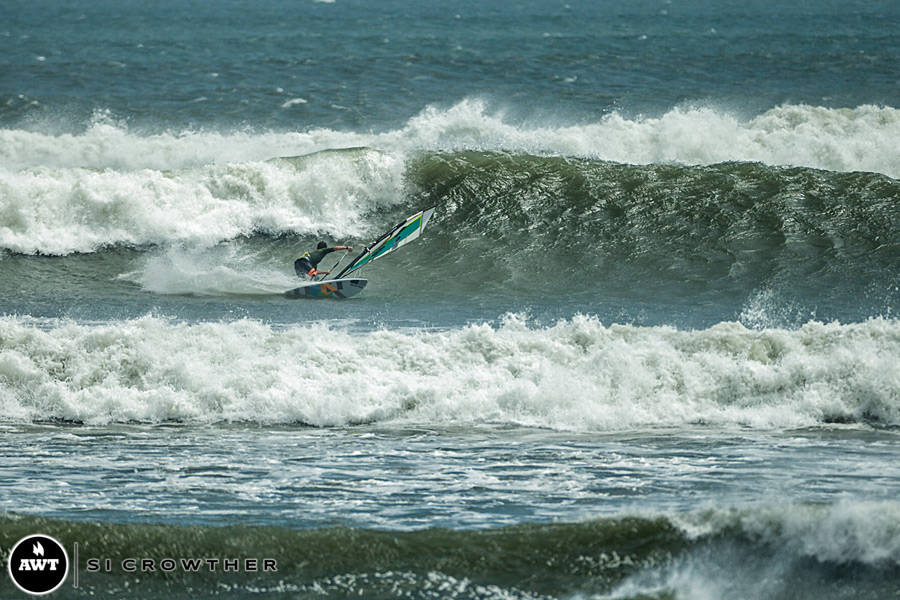 We are now left with a 4 man semi-final: Morgain Noireaux, Bernd Roediger, Levi Siver & Kevin Pritchard. The top two will advance to a man on man final and the chance to claim Peruvian gold. 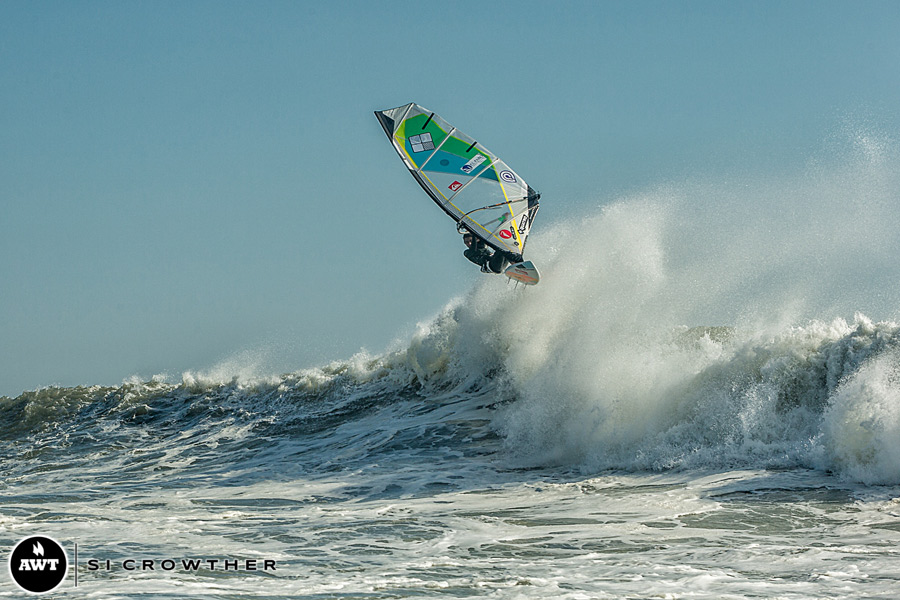 “I feel lucky to watch the Professional division here in Pacasmayo Peru. I see passionate sailors charging trying to reach the highest level in down-the-line wave riding with some of the best windsurfers in the world. It’s motivational… plain and simple. Watching Morgan, Kevin, Bernd, and Levi, all of whom I am friends with, just rip waves apart makes me want to be able to do that. I think that is the coolest part of the AWT and the Pro Divisions… the motivation it gives the younger sailors who want to achieve that level of sailing, who someday want to be competing in the division along with his/her heroes. At least that’s my point of view and hopefully one day I’ll be there right along with them… even if I lose first round every time! ☺ The AWT gives riders like me a chance to develop and compete at the highest level. Thanks to all the boys in the Pro division pushing the limits of windsurfing and showing me what is possible, watch out there may be a girl in your heats soon!” Fiona Wylde (Quatro International, Sailworks, Dakine, O’Neil, Vector Fins)

Yesterday in Pacasmayo the professional division proved what it’s like to be an American Windsurfing Tour Rider.. a passionate windsurfer, here, competing because of the love for the sport and showcasing at a world class level. 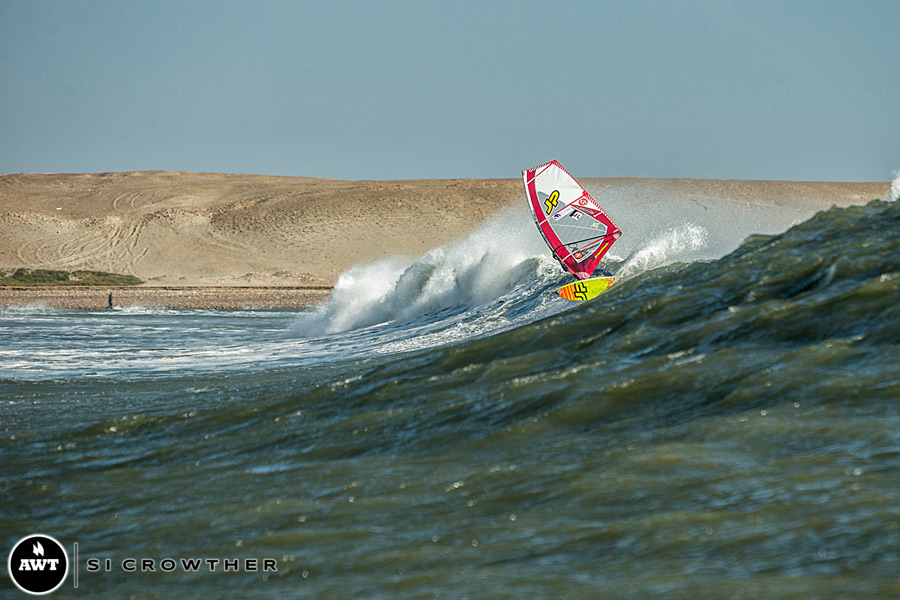 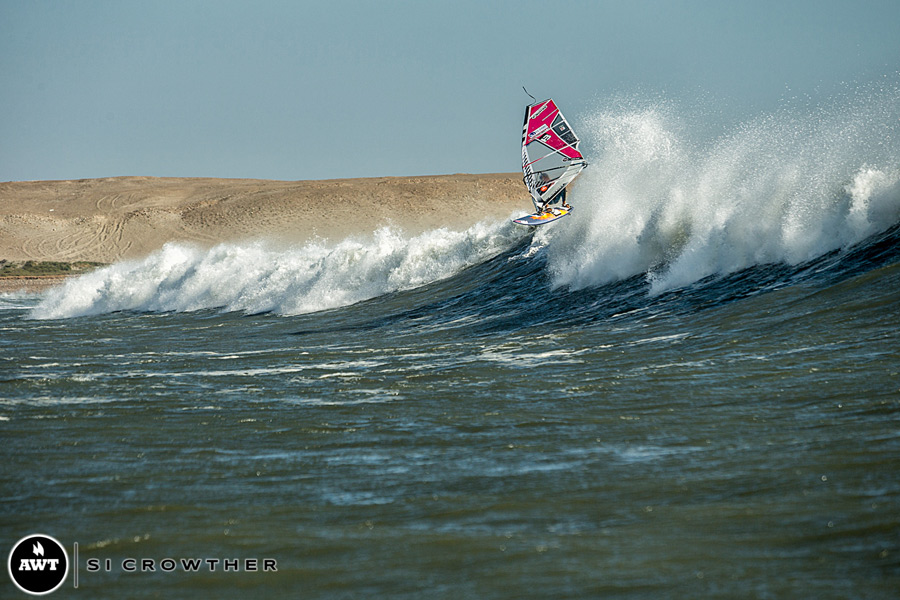 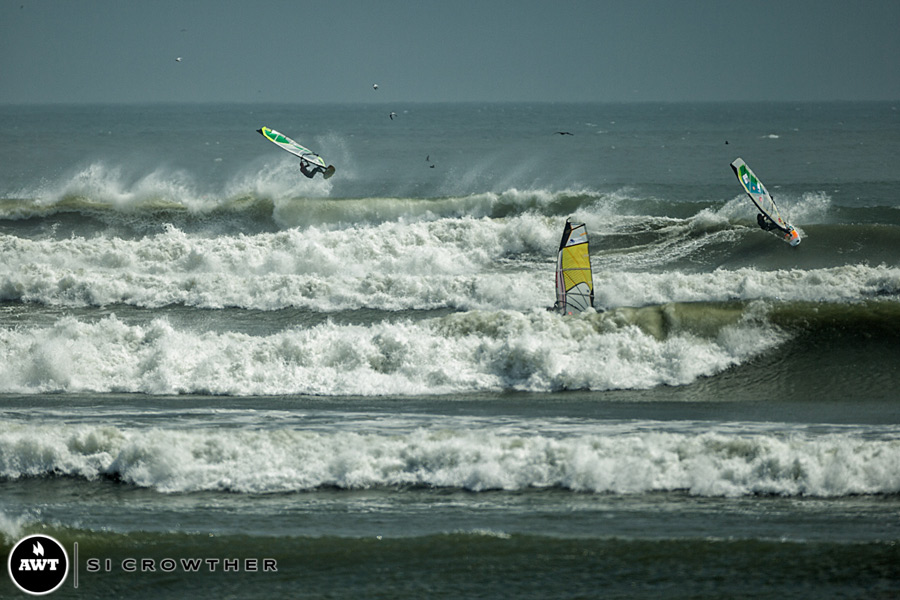 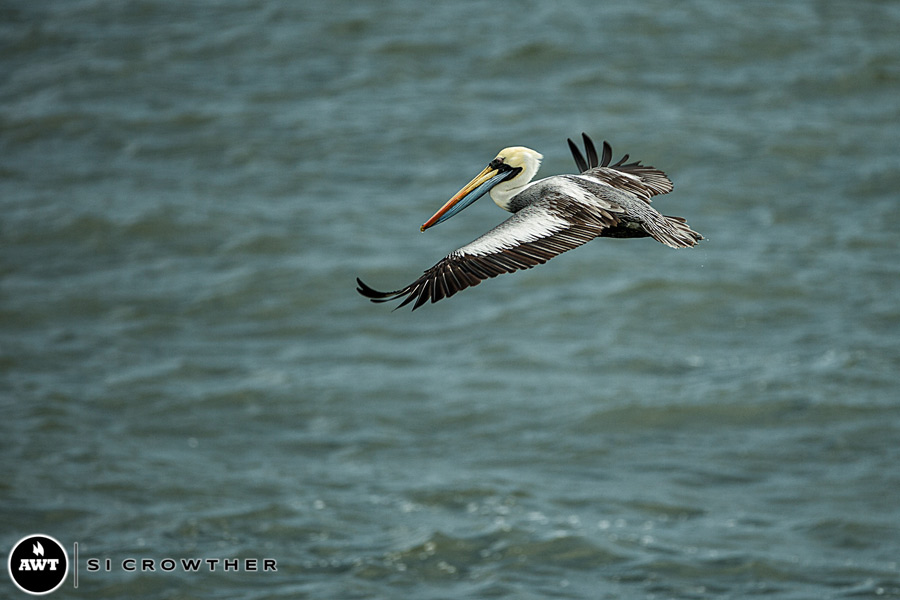 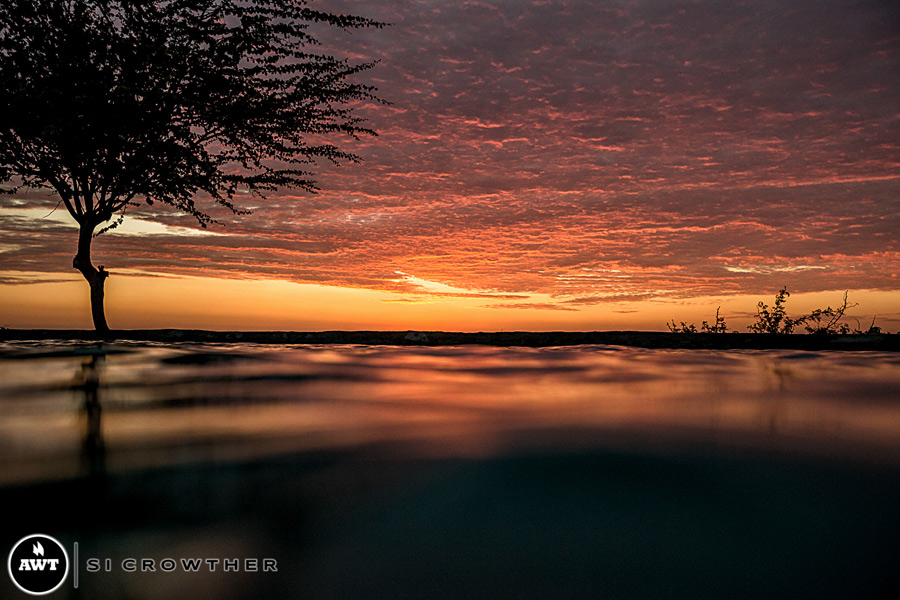 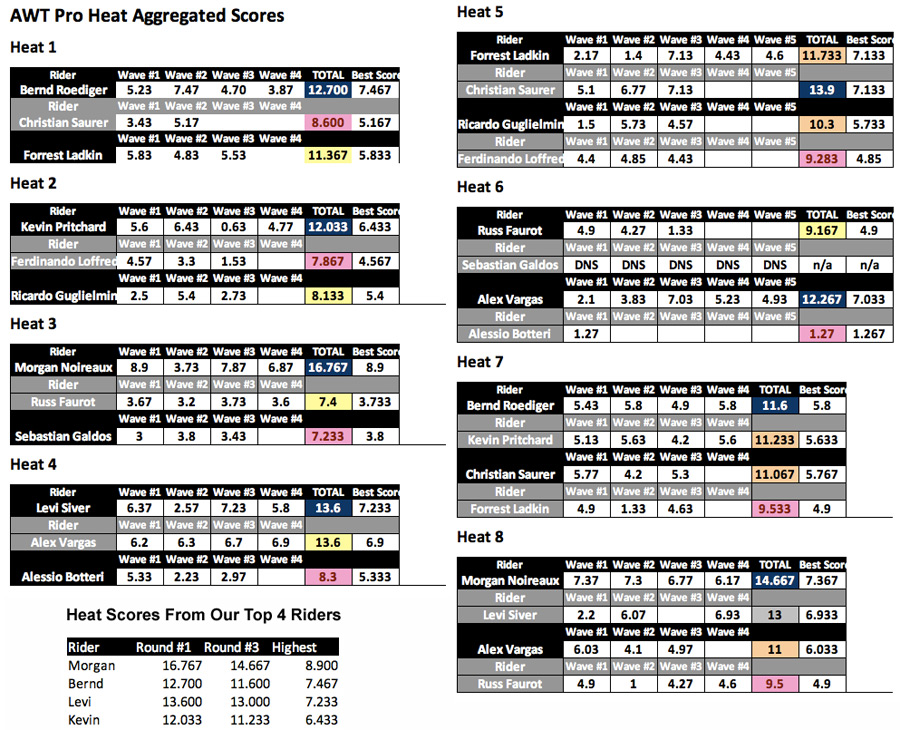