Day 6  saw classic excellent conditions in Pacasmayo. Heats began for women, masters and grand masters divisions. The wind ranged from 15-23 knots and was slightly gusty, but had a nice side-off direction allowing most sailors to be powered up on the waves with 4.5M-5.0M sails. 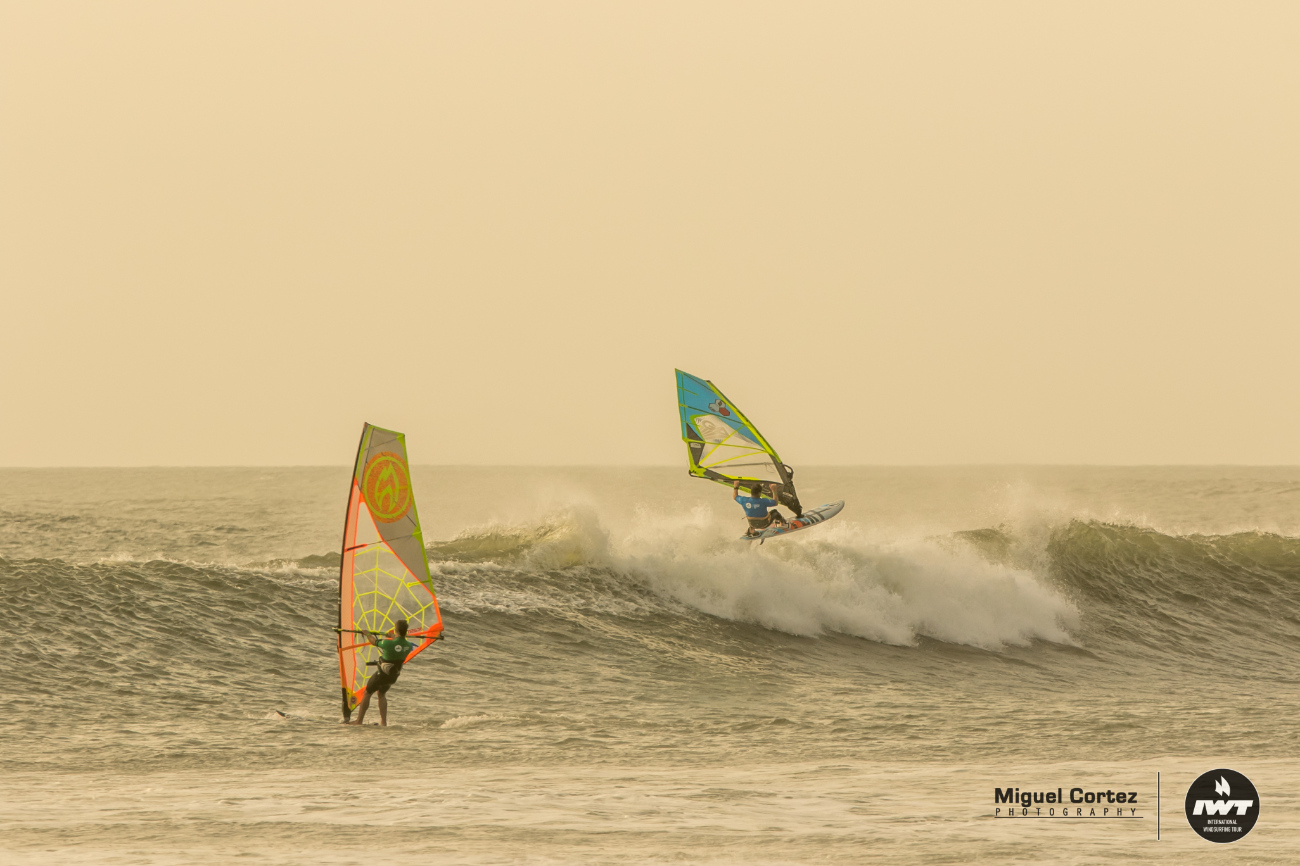 Masters:
The masters rounds were up first with Ferdinando Loffreda, Adrian Levy and Simeon Glasson sailing extremely well in their heats to advance straight to the semifinals. Ferdinando chose a perfect set wave and rode it down the line timing his turns to be in the critical section at every hit, earning him high marks. Simeon and Adrian both from Australia appeared very comfortable in the port tack down the line conditions as well, leapfrogging the repechage round.

Semifinal 2 had Raul Reiner and Adrain Levy battling for the other 2 spots in the final. Adrian showed his port tack savvy smashing the waves to bits. Raul Reiner surprised the crowd with improved sailing from last year while using his light weight frame to maneuver around the contest zone with ease. Raul won the second semi and is excited for the coming final. 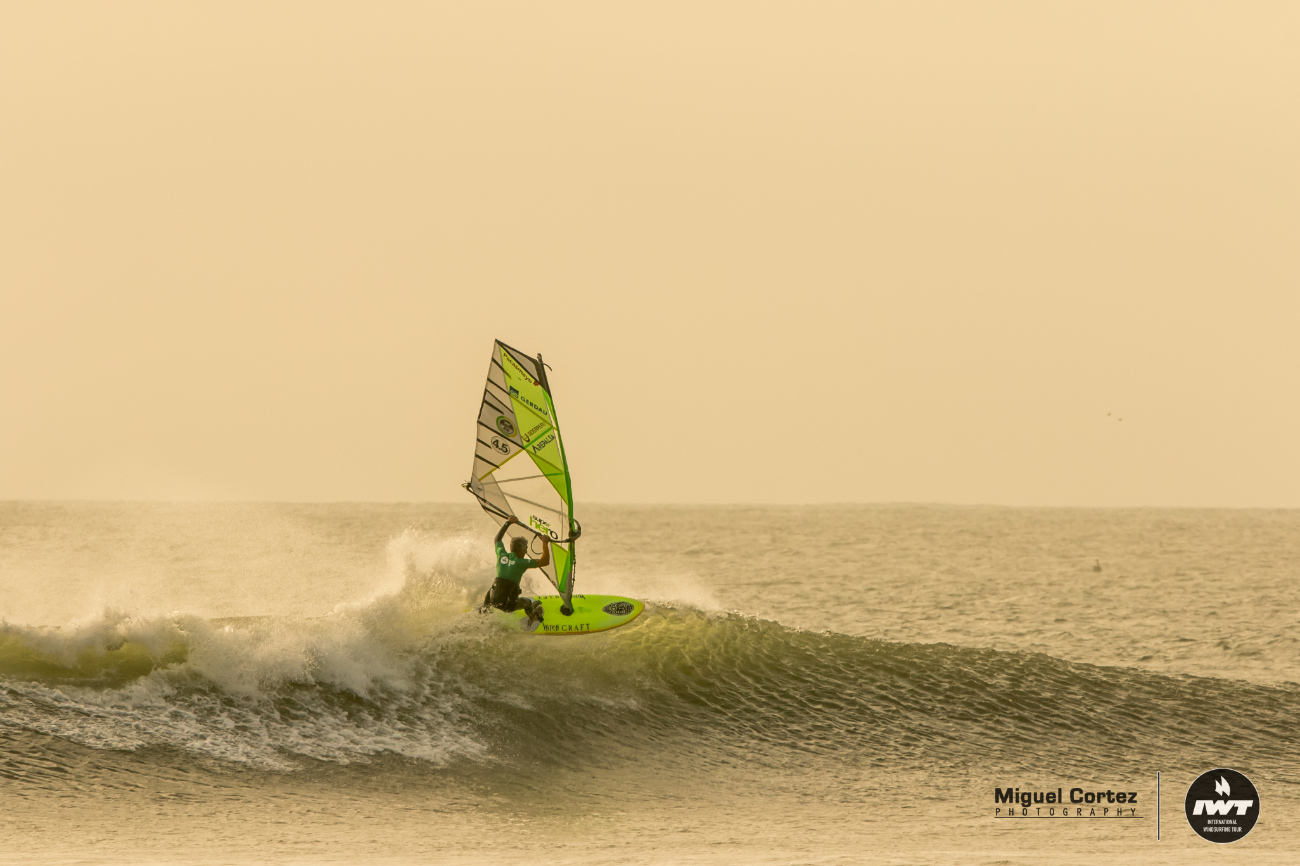 Grand Masters:
Peter Kimball has been coming to Pacasmayo for 4 years and has figured out the wave quite well. He knows where to be and when to be there for the best set waves. New to the IWT, Takahiro Nakano arrived to the water 10 minutes after his heat began but none-the-less managed to achieve 2 beautiful waves placing him 2nd in the heat. IWT legend Scott Shoemaker came 3rd and Leonardo Ferrara 4th in the the first round of Grand Master heats.

Women:
Maria Andres dominated the first heat with logo high perfect pealing waves ridden throughout the entire contest zone. She clearly had a plan and executed it perfectly. Maria’s 2 waves set the standard for the very high level women’s fleet on this day. Lina Erpenstein, one of the top ladies from the PWA showed she is just as comfortable in down-the-line wave riding as she is in the high wind jumping model that is more frequented by the PWA. She clearly knows how to wave ride catching beautiful waves and timing her turns perfectly. Former world champion Jessica Crisp wowed the crowd with an excellent performance as well, but still had to fight through the second round. 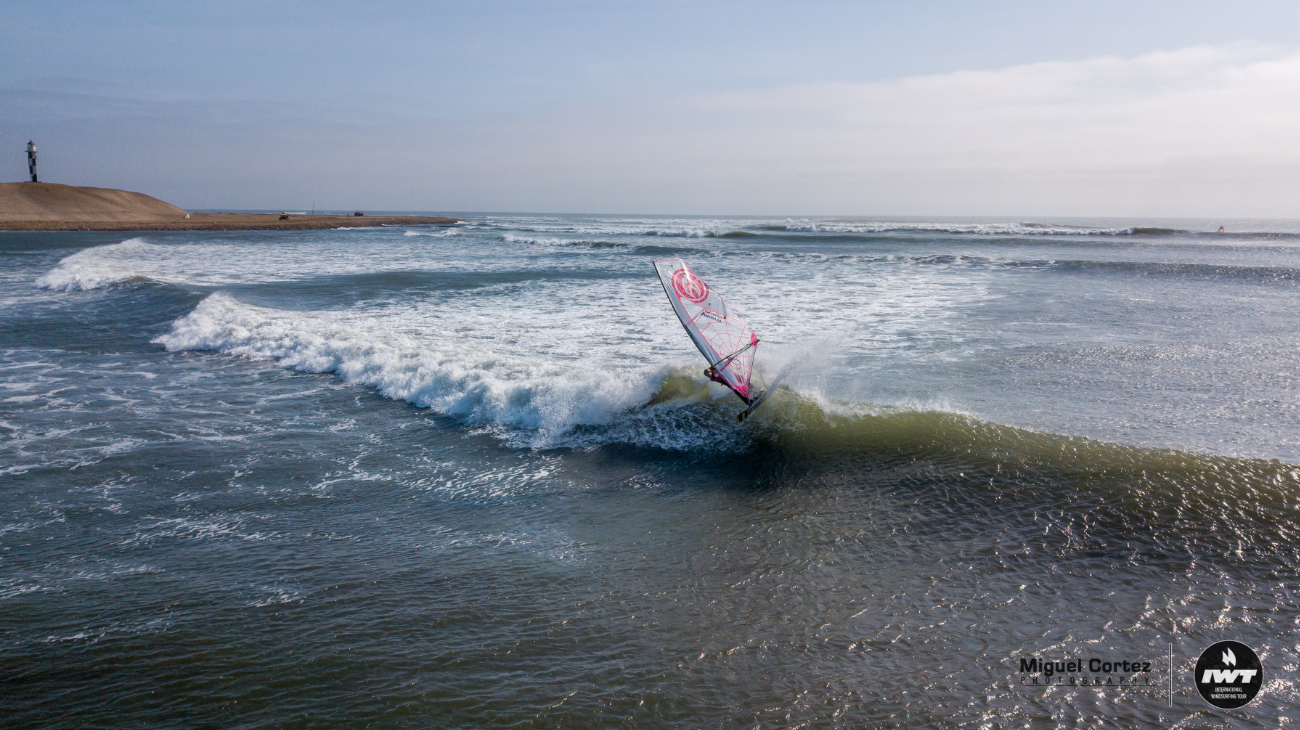 In what may look like a bit of an upset, Austrian rider Brigit Reiger advanced straight to round 3 over Aloha Classic champion Sarah Hauser in round one. Brigit was on fire picking off 2 huge waves and slicing away at them to win the heat. Sarah got her chance at redemption in round 2 and safely holds her name in the semi finals. Olympic hopeful and local Peruvian, Maria Belen Bazo picked the best waves in heat 4 riding with style and grace to also make it straight to the semifinal.

Round 2 of was extremely tight with 9 riders battling for 4 places in the semifinals. Bjorte Purschel needed every second of the heat to find 2 good waves. She caught her last wave just before the buzzer, but it was a beauty and she rode it the distance earning just enough points to gain her position. 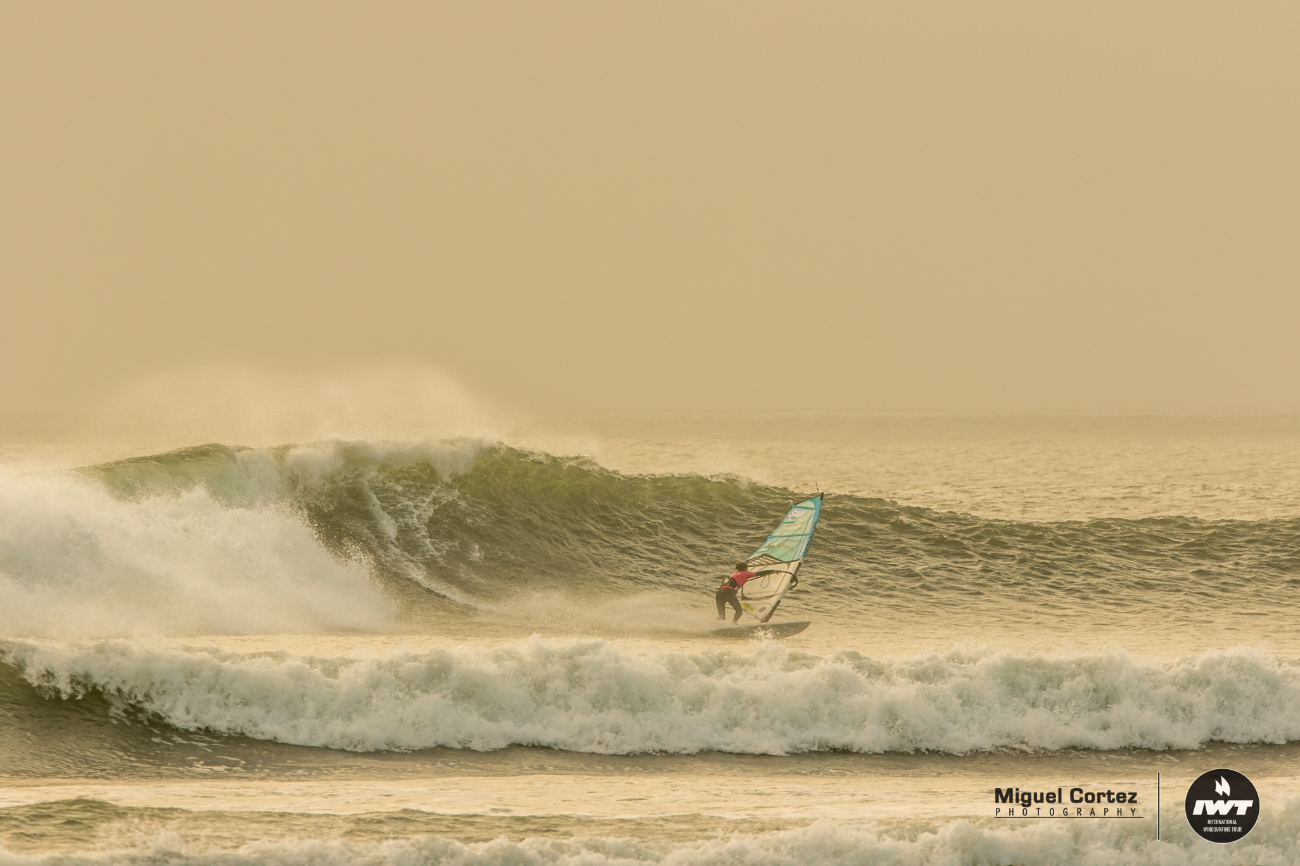 The second heat was a big battle with all the girls trading waves. Fortunately there were plenty of sets to go around, so everyone had an equal opportunity for the best waves. Sabine Zola and Jessica Crisp stood just above the others and set up what is sure to be the best final 8 of the women’s division that Pacasmayo has ever seen.
There was still one heat remaining for the day and it was Tom Ben-Eliyahu that stood out in this amateur heat. He will be joined by Zack Coleman, who placed second in the heat, when the semifinals commence.

Overall, day 6 was a fantastic day with classic top notch conditions in Pacasmayo. The swell was rising all day and it is expected to be much bigger Friday and Saturday. Stay tuned for an epic finish in the next 2 days. 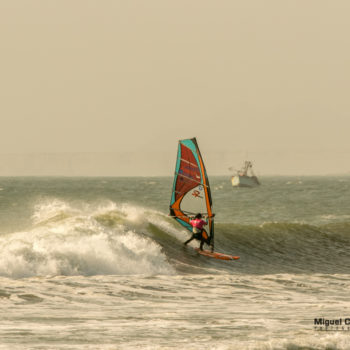 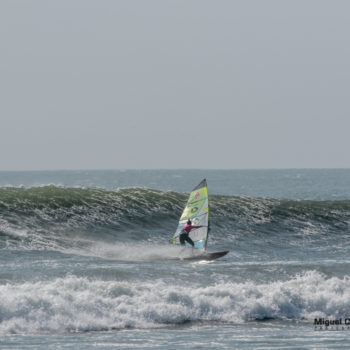 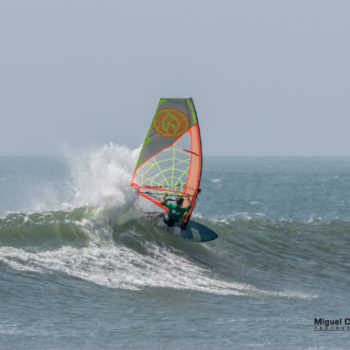 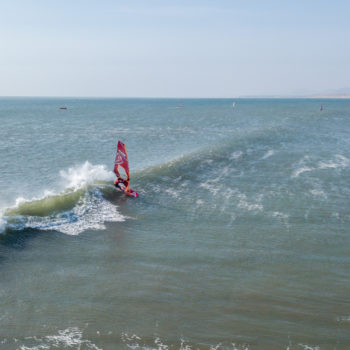 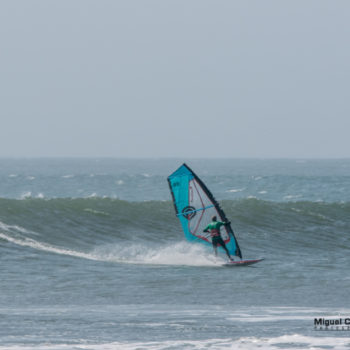 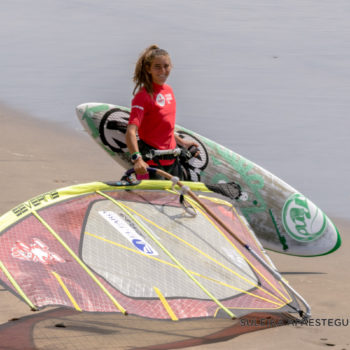 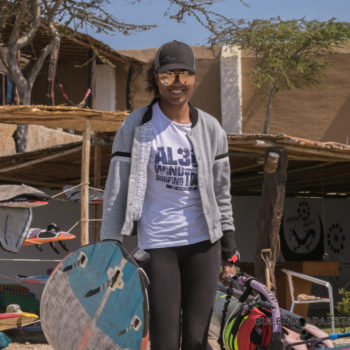 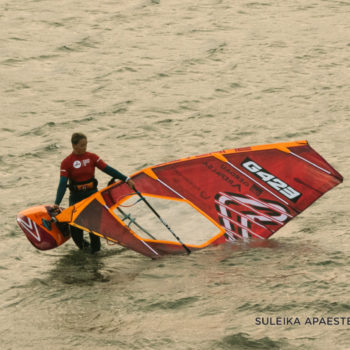 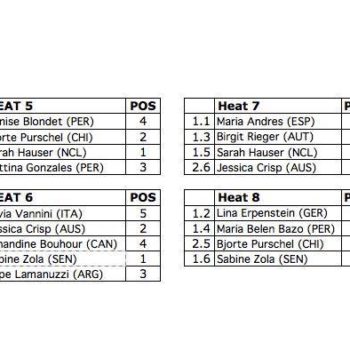 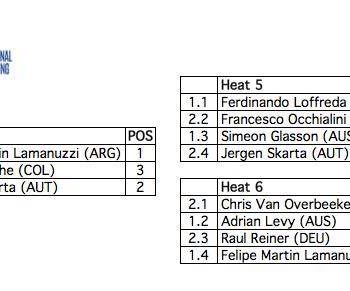 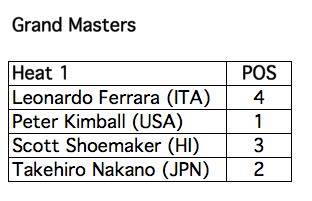 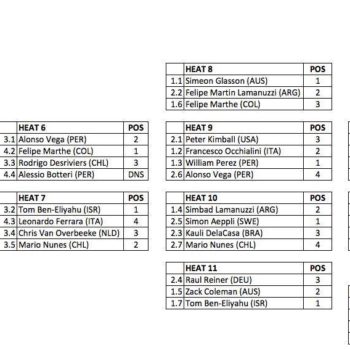