An IWT Movie!
Be Part of It….Just be There…Windsurfing History.

From the Makers of “The Windsurfing Movie,” Poor Boyz Productions will be creating a feature film on this year’s IWT.  Filming has already begun and will be focusing heavily at the Pistol River Wave Bash.

The 10th Anniversary is This Year!

Pistol River is back and bigger than ever this year.  The IWT has celebrated 9 successful events at Pistol River.  Help us make this tenth anniversary event bigger than ever.  From June 15th – 22nd the Pistol River Wave Bash will see pros and amateurs from around the world competing for the top spot on the podium.  With a full week window, the IWTexpects world class conditions, making for an epic show. Riders will stay at the Inn of The Beachcomber in nearby Gold Beach (call for reservations 1-888-690-2378.) There will be social events around the community from Brookings to Gold Beach, culminating with the closing party at the Gold Beach Brewers Festival.  The first 30 registered riders will receive a pass directly into the Festival.  There are still spaces available, so book your tickets, and register for the 10th annual Pistol River Wave Bash! 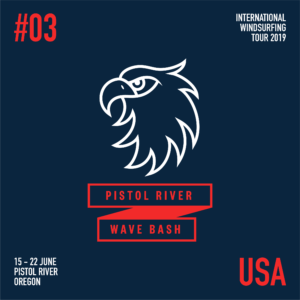 Originally a single event in the Oregon Coast’s Pistol River, the success of that 2010 event demonstrated the huge hunger for fun pro/am regional and international events in the Pacific arena to compliment the strong PWA and amateur events that largely service the European hemisphere. Things have grown form there…

In 2011, co-founders Sam Bittner and Russ Faurot, formed the AWT (The American Windsurfing Tour) and expanded to four events: Santa Cruz (California USA), Pistol River (Oregon, USA), San Carlos (Baja, Mexico), and  Maui (Hawaii, USA.) This was the first year for a wave tour of any serous description in the Pacific for a very long time, and there was a lot of energy and support.

In 2012 the AWT expanded to include Pacasmayo, Peru and the American Windsurfing Tour then had two international events on the calendar: Mexico and Peru. The tour remained strong for 2013 and 2014.

IN 2015 The AWT expanded to include a third international event, in Carbo Verde. This took the tour to seven wave events, still with the best four to count toward overall rankings, three of the events were now international: Mexico, Peru and Carbo Verde.

In 2019 the tour received a long overdue injection of funding that has allowed it to  expand its media platforms, offer overall tour prize money for the first time for both the pro men and pro women, and begin a global media campaign to unite the tribes of windsurfing to once again present the sport to the world.

The long term goal of the IWT is to offer more opportunities for more riders, of all skill levels, while uniting the global tribes of windsurfing to support the continual evolution and expansion of the sport around the world.